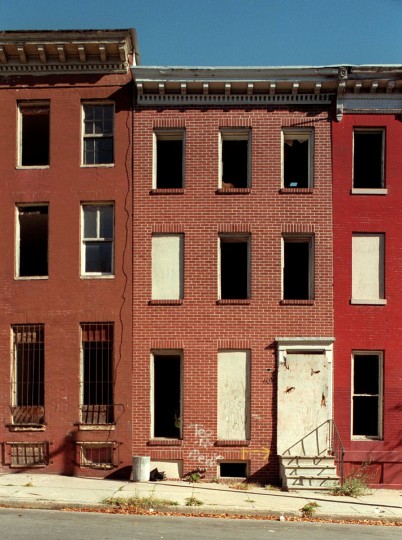 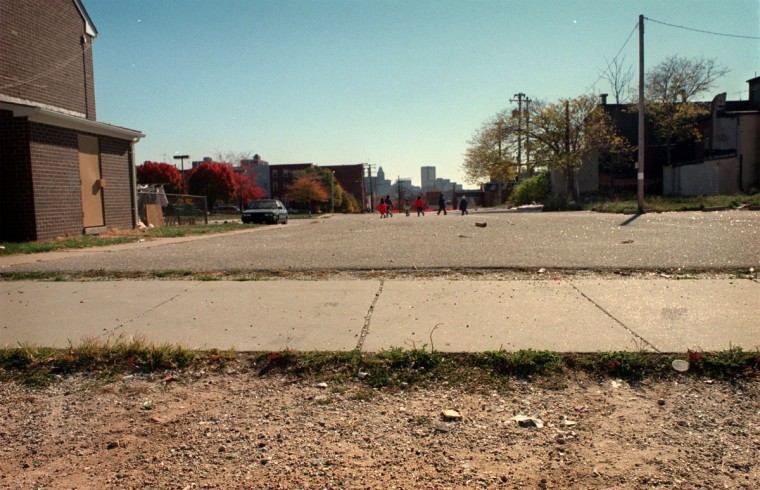 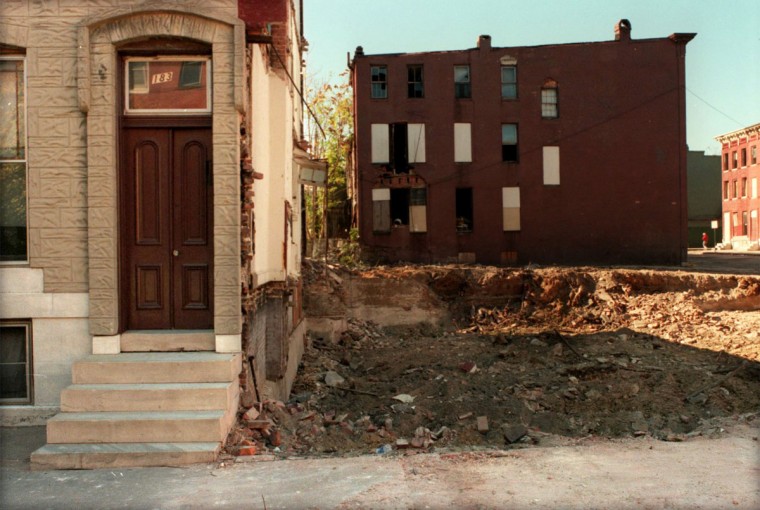 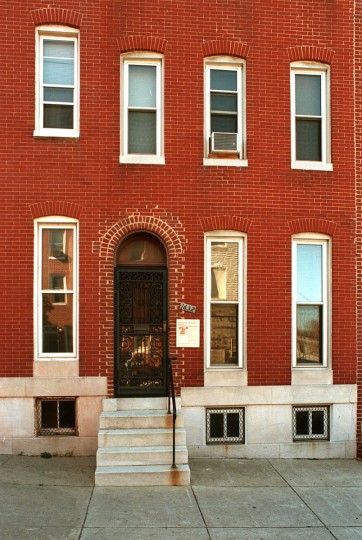 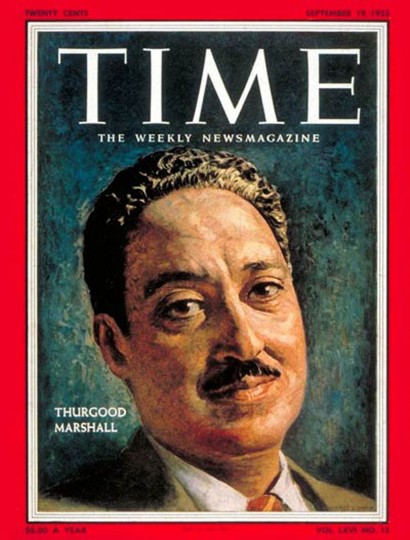 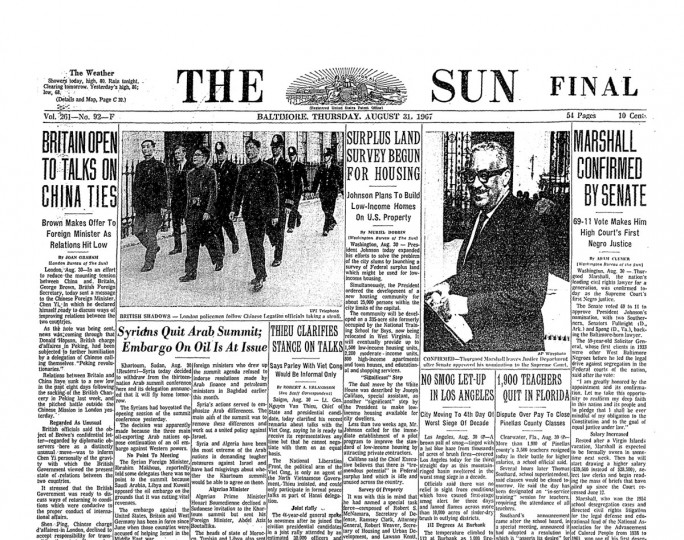 The Baltimore Sun front page following Marshall’s confirmation by the Senate. The subheadline noted that he was the “high court’s first negro justice.” (Baltimore Sun archives) 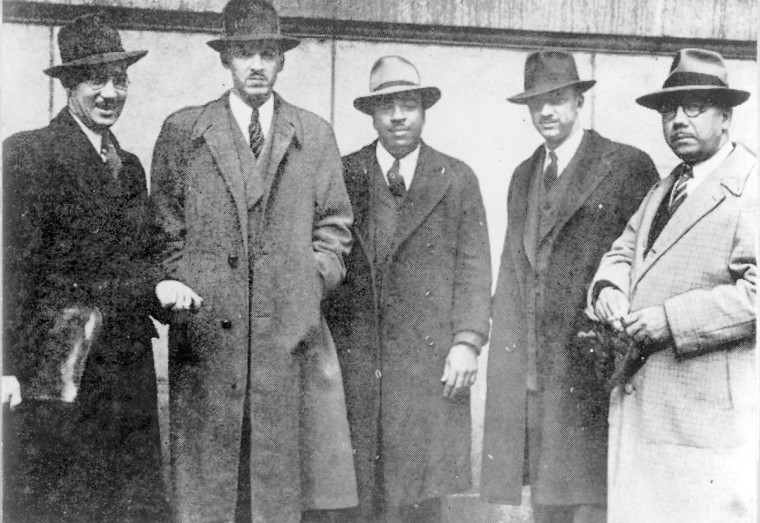 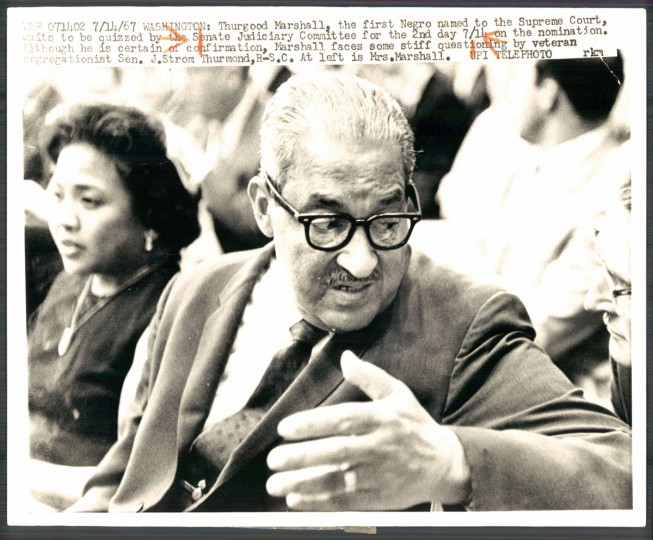 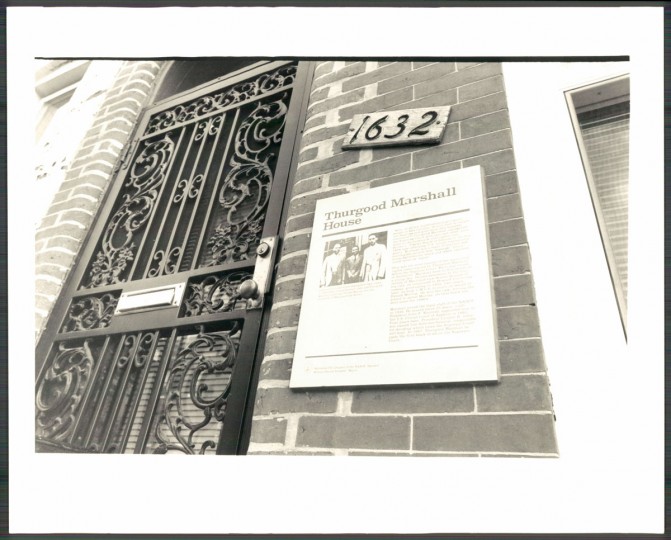 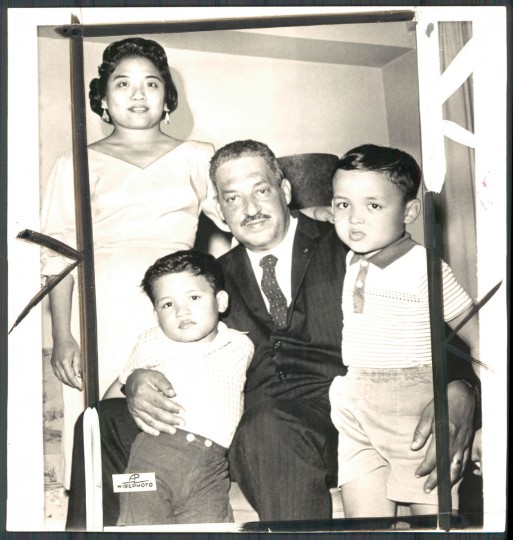 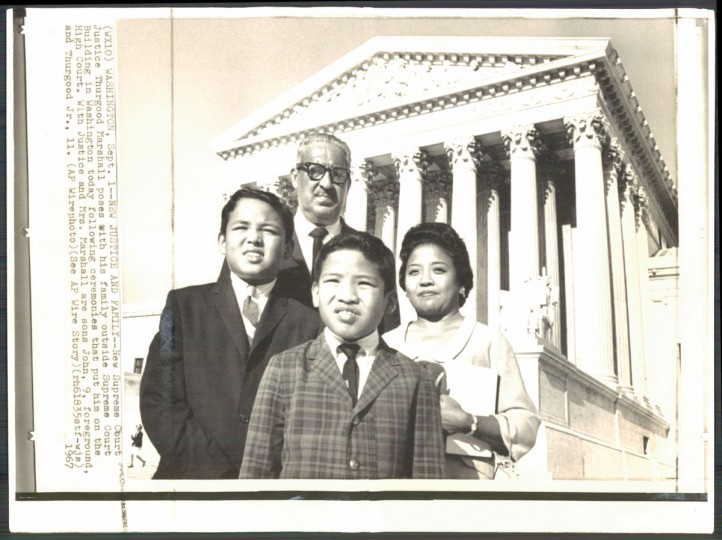 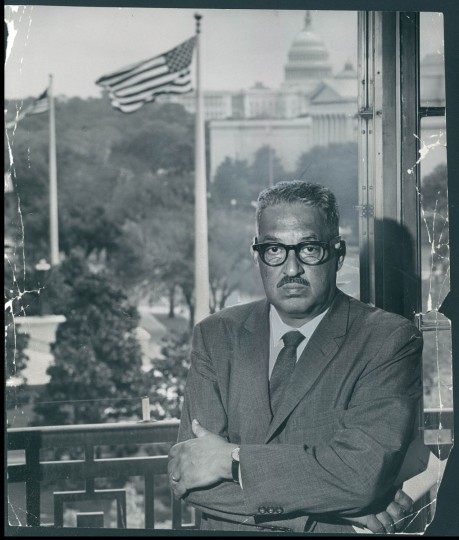 February 20, 1966-THURGOOD MARSHALL–Austere and imposing in a picture taken in his Washington office, Thurgood Marshall, Baltimore born U.S. Solicitor General, can be informal enough to put everyone at ease, has a fund of jokes and stories to illustrate every point. Photo by Sun photographer Richard Stacks. (Baltimore Sun archives) 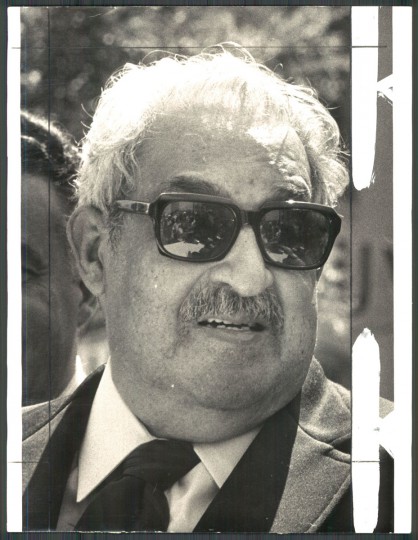 Thurgood Marshall, the first African-American Supreme Court Justice, was sworn into office 50 years ago this fall. He grew up in Baltimore, and his time here helped shape his commitment to civil rights. (Baltimore Sun archives) 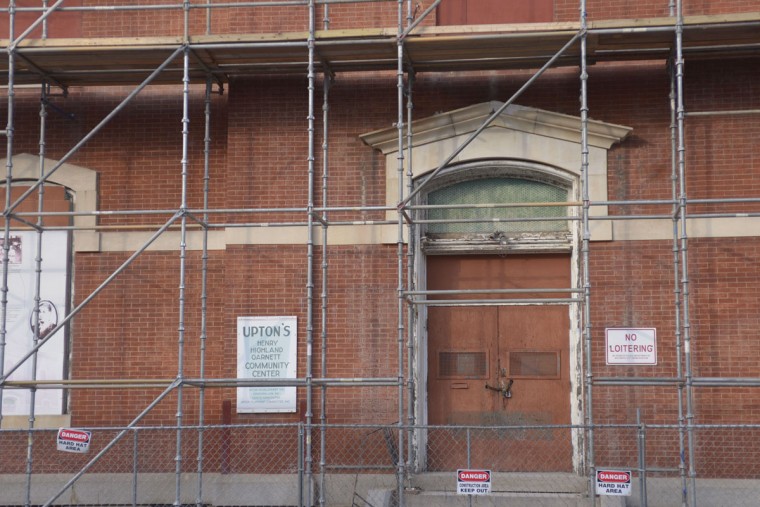 The exterior of 103, also known as the Division Street School, where Thurgood Marshall attended elementary and middle school. It was once considered the best school for blacks in the city. However, today it’s largely in ruins. (Christina Tkacik/Baltimore Sun) 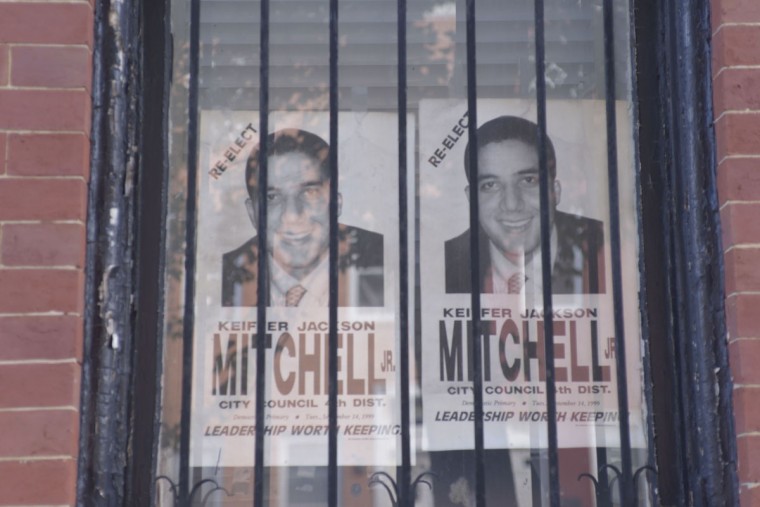 Mitchell campaign posters from the 1990s serve as a reminder of the Mitchell family’s political prominence. (Christina Tkacik/Baltimore Sun)

A sign for “Marble Hill” pays homage to the neighborhood’s historic past as home to prominent African-American families. (Christina Tkacik/Baltimore Sun) 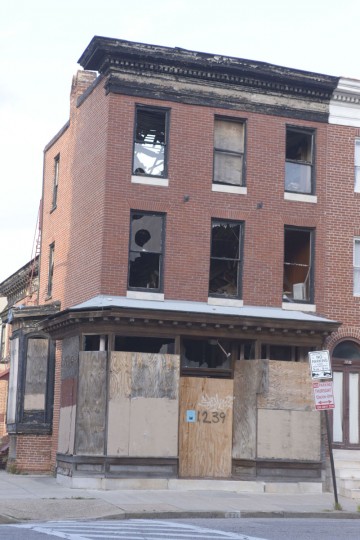 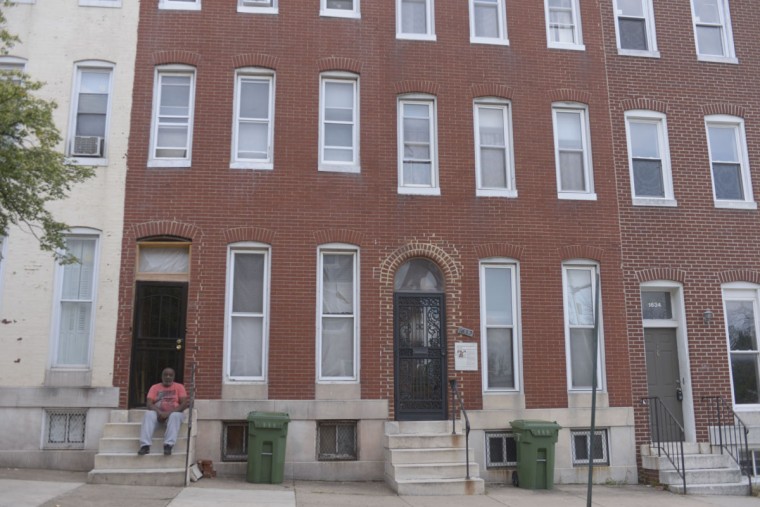 Orlando Bartee remembers the old days of Division Street. “That world yielded a certain kind of respect that no one even knows about anymore.” (Christina Tkacik/Baltimore Sun) 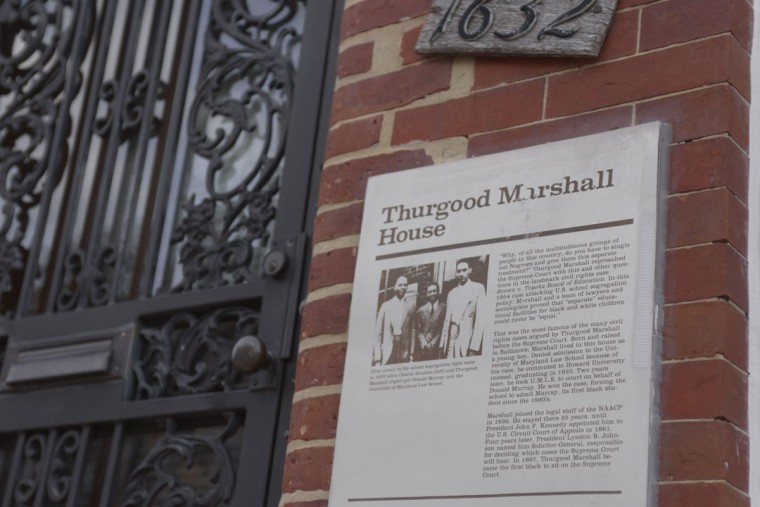 Thurgood Marshall’s childhood home on Division Street in West Baltimore. The neighborhood was once one of the city’s thriving African-American areas. Today, many houses are vacant, and crime is high. (Christina Tkacik/Baltimore Sun) 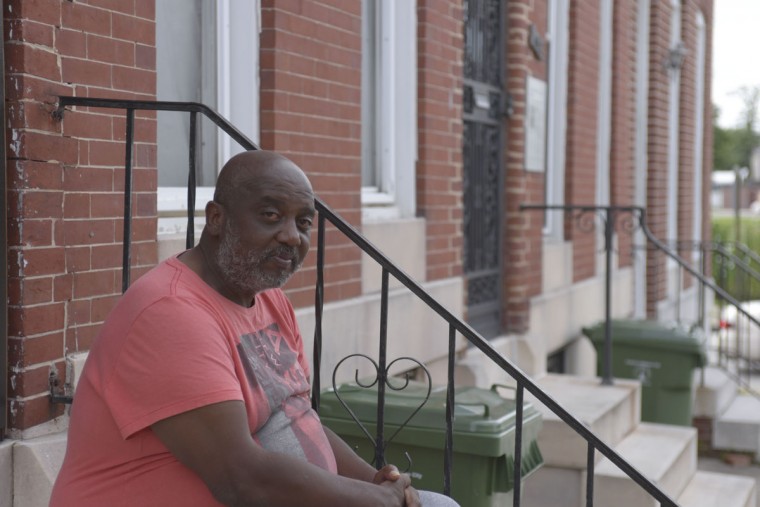 Orlando Bartee, 63, grew up in the house next door to Thurgood Marshall. He also attended the same elementary school just down the street, before transferring to the newly-desegregated Mt. Royal. (Christina Tkacik/Baltimore Sun)

“It was a different world,” Olando Bartee said, sitting on the marble steps of his house on Division Street.

Next door used to live Thurgood Marshall, the first African-American Supreme Court Justice, sworn in 50 years ago this fall. Marshall’s own father used to sit on the front marble steps, too, according to biographer Larry S. Gibson. He’d wear his undershirt to annoy his wife, who was more refined.

The house on Division Street belonged to Marshall’s uncle, Fearless, or “Fee” for short. The family moved in when Thurgood was 6. Both sets of grandparents owned grocery stores; one, on the corner of Dolphin and Division streets, was the largest black-owned grocery store in the city.

“At that time you had a lot of prominent families living in this neighborhood,” reminisced Bartee, who, at 63, was born nearly 50 years after Marshall. He never knew Marshall personally, although he did know his aunt and attended the same primary school, at least for a while.

He rattles off some names of former neighbors: The Murphys, the Mitchells, long the top black political family in Baltimore. The families supported one another, and kept an eye on each other’s kids.

Marshall’s life was circumscribed by segregation. Discriminatory housing laws meant blacks couldn’t buy houses on majority white blocks. Though they shopped at the stores along neighboring Pennsylvania Avenue, they couldn’t get jobs at the same shops.

Down the street, 103, or the “Division Street School” was considered the best school for black children in the city. It was there that Marshall changed his name from “Thoroughgood” to “Thurgood” – because, he said, he got tired of writing out the longer name.

But Thurgood Marshall’s own memory suggests some jagged edges to the smooth lines of the past.

“We lived on a respectable street, but behind us there were back alleys where the roughnecks and tough kids hung out,” Marshall said, according to biographers Roger Goldman and David Gallen. “When it was time for dinner, my mother used to go back to the front door and call my older brother. Then she’d go to the back door and call me.”

Marshall occasionally got in fights with local kids, including the Italians who attended a neighboring Catholic School, according to Gibson. But he excelled in school, eventually opting to become a lawyer.

He couldn’t attend Maryland Law because he was black; he commuted to Howard instead. After graduating, he became a community organizer, helping lead campaigns like the 1933 Buy Where You Can Work effort to boycott stores in Baltimore that wouldn’t hire African-Americans. Later, he became the landmark civil rights lawyer, helping to end segregation once and for all.

As a student, Bartee experienced firsthand the enormous impact of Marshall’s work on Brown v. Board. After the end of segregation, Bartee left the Division Street School and attended one of Baltimore’s first integrated schools, Mt. Royal.

“It was the first time I had ever been around any whites,” he said.

The school was state of the art, Bartee said. Back at 103, he said, “We were still on the ‘Dick and Jane books.’” But at Mt. Royal, “Everything was new. As a matter of fact it was like a slingshot to a better education in those days.

He remembers also getting roughed up by police officers who questioned what he was doing in the predominantly white neighborhood of Bolton Hill.

Today, Bartee said he’s one of the only longtime residents that still lives in the neighborhood, which has become a hotspot for drug dealers and crime. Many of the neighboring houses on Division Street are vacant now. The old Division Street School building burned down and is covered in scaffolding.

But Bartee still has his memories. “That was this block. That world yielded a certain kind of respect that no one even knows about anymore.”