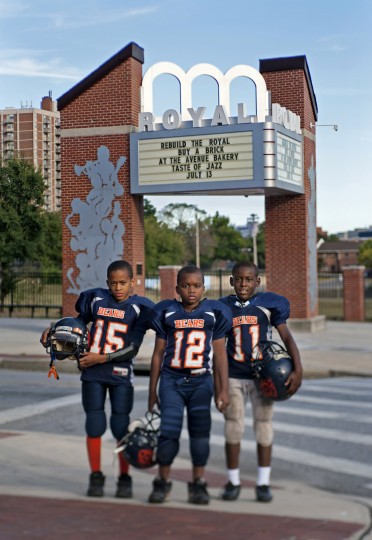 Royal -1329 Pennsylvania Avenue — From left, Tyler Saunders, Traveis Howell and Jawuan Maultsby were ready for football practice in 2013 on the field that replaced the Royal and other businesses. The Royal, much beloved in the African-American community for its superb live entertainment, was torn down in 1971. From “Flickering Treasures: Rediscovering Baltimore’s Forgotten Movie Theaters,” © Amy Davis. 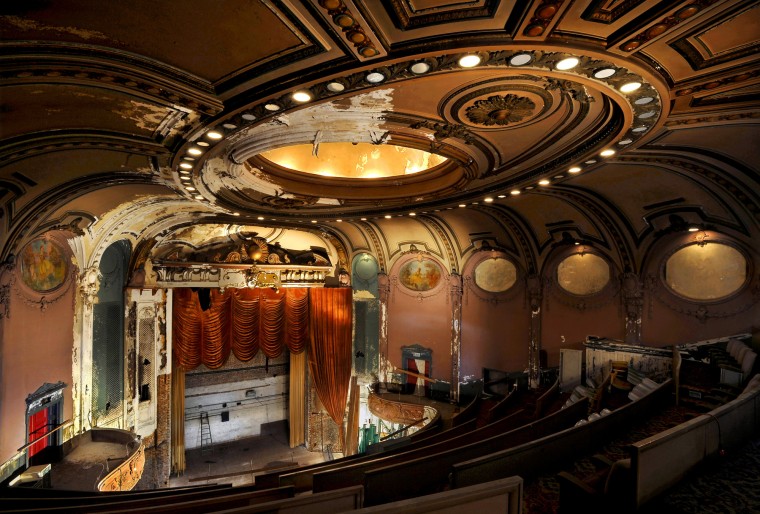 Parkway – 5 West North Avenue, 2012 — The auditorium of the Stavros Niarchos Foundation Parkway Theater retains much of its Baroque glory, despite several decades of abandonment . It’s been revived as the home of the Maryland Film Festival. The current auditorium is called a “rescued ruin” because it retains aesthetic elements of its decay. From “Flickering Treasures: Rediscovering Baltimore’s Forgotten Movie Theaters,” © Amy Davis. 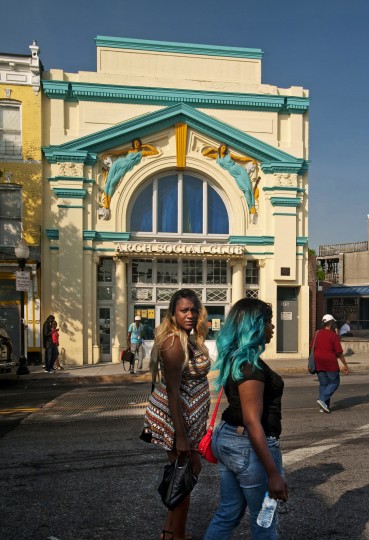 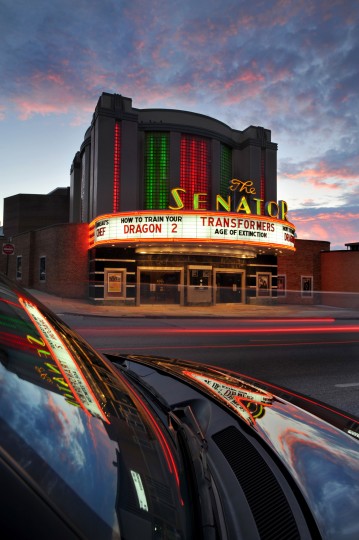 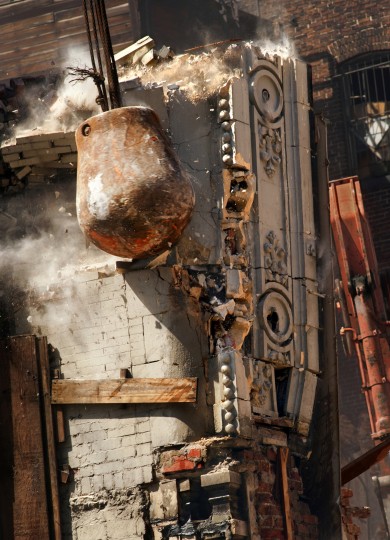 New – 210 West Lexington Street — The wrecking ball brings down the century-old New Theater in 2010. The New, one of Baltimore’s downtown theater palaces, was in operation from 1910 to 1986. From “Flickering Treasures: Rediscovering Baltimore’s Forgotten Movie Theaters,” © Amy Davis. 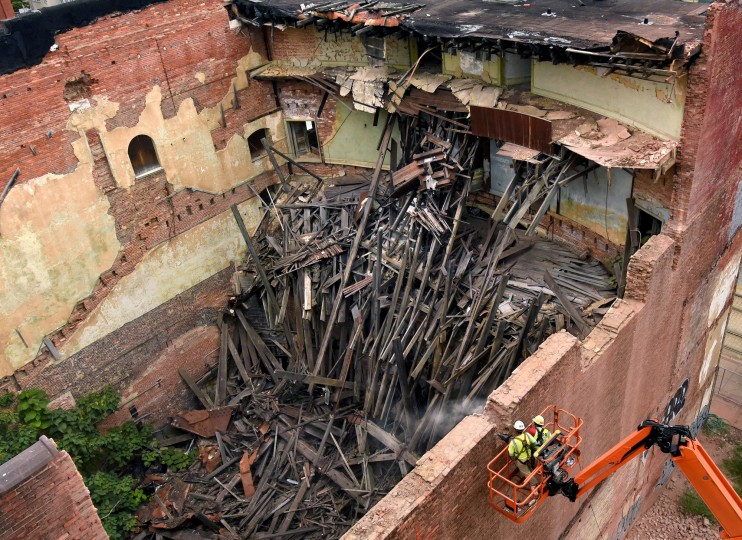 Mayfair – 508 North Howard Street — Partial demolition of the venerable 1904 Mayfair began in the fall of 2016. All that remains now is the handsome facade and a portion of the side walls. From “Flickering Treasures: Rediscovering Baltimore’s Forgotten Movie Theaters,” © Amy Davis. 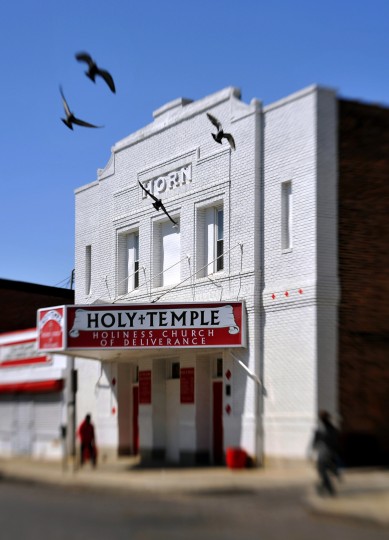 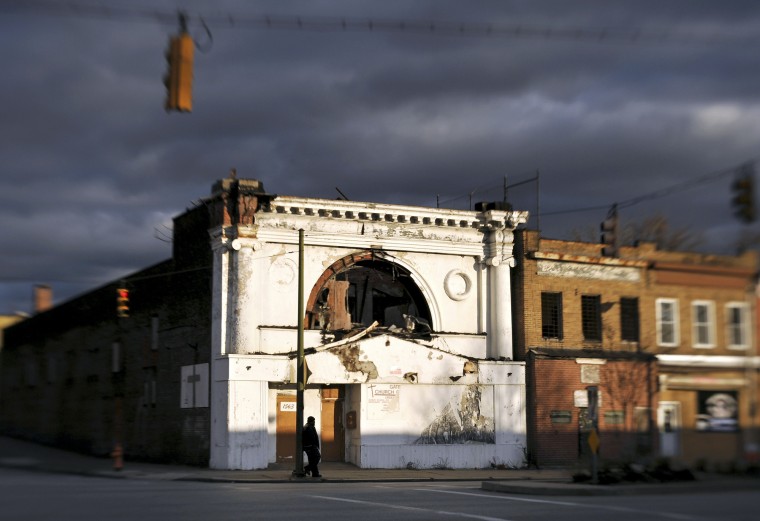 Fulton -1563 North Fulton Avenue — The church which owned the Fulton Theater abandoned the building after a fire in 2007. The dark sky in this 2012 image provides a sense of foreboding for the theater’s doomed fate. The building was razed by the city in early 2017. From “Flickering Treasures: Rediscovering Baltimore’s Forgotten Movie Theaters,” © Amy Davis. 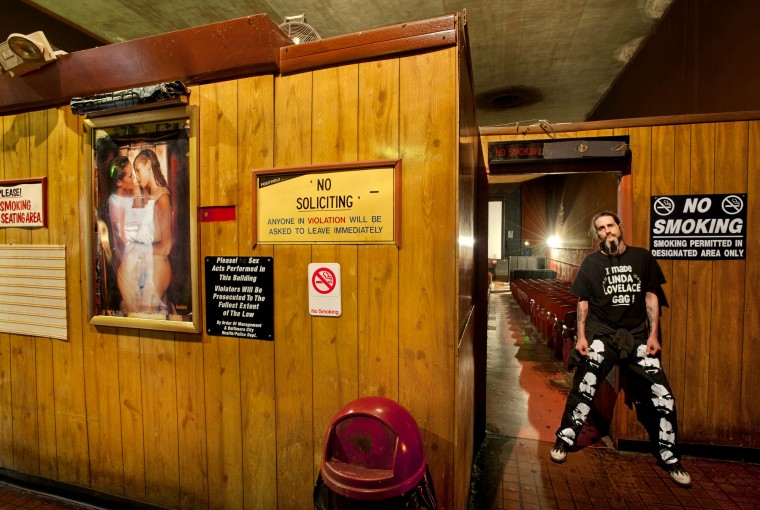 Apex, 110 South Broadway, 2013 — Andrew Gore, one of the visitors to the Apex on the day the theater was auctioned in 2013. Baltimore’s last adult movie theater became a convenience store in 2014. From “Flickering Treasures: Rediscovering Baltimore’s Forgotten Movie Theaters,” © Amy Davis. 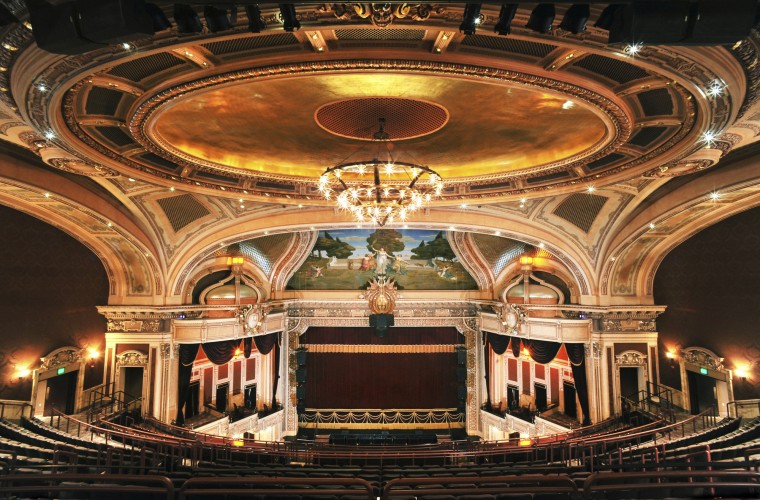 Hippodrome – 12 North Eutaw Street — The meticulous restoration of the Hippodrome to its original 1914 appearance was completed in 2004. Now a venue for national touring theater productions, the Hippodrome was popular for its vaudeville, big bands and celebrity performers in its first four decades. From “Flickering Treasures: Rediscovering Baltimore’s Forgotten Movie Theaters,” © Amy Davis.

With her book “Flickering Treasures,” Baltimore Sun photojournalist Amy Davis invokes the ghosts of dozens of Baltimore movie theaters past.

Through archival photographs of 72 theaters, dating back to the early years of the 20th century, Davis’ book shines a spotlight on architectural ghosts the city has long forgotten. And each historic picture serves as a preface to the real meat of the book: Davis’ own photographs, revealing the modern uses for these glorious structures. Some have been razed, a few are still showing movies. Most have been re-purposed — into churches, warehouses, food stores, even, in one case, a community college. Many sit vacant, crumbling and sad, waiting for a savior.

We asked Davis, who has been shooting photographs for The Sun since 1987, to talk about her book, the inspiration for it and some of the revelations she experienced during the near-decade she spent putting it together.

Why movie theaters?
My interest was sparked by the Senator Theatre, which is near my home. When that was facing foreclosure [in 2007], I was upset. I had an attachment to that theater. Later on, I realized a lot of people had attachments to their neighborhood theaters. That got me curious about what happened to all the other theaters.

Why do you think people have that kind of attachment?
The experience of going to your neighborhood theater was entwined with your sense of neighborhood, and the sense of identity that you get from your neighborhood. That’s one of the reasons people really love them.

The neighborhood theaters were also where people spent their entire Saturdays when they were children growing up. So those are indelible memories.

Since you began this project, 11 of the buildings you photographed have been razed. Is there a surviving building you’re especially concerned about?
I’m really worried about the Ambassador [in Park Heights]. I think the Ambassador is the most beautiful art deco building in Baltimore, certainly the most beautiful art deco theater. And it’s criminal what’s happened to that. The facade is still salvageable, but I’m not sure what will become of it.

Does the city lose something, by not having theaters like these anymore.
The question really is, what happens to the health of the city when you have neighborhoods that aren’t healthy. Theaters are just endemic of a neighborhood that’s not healthy.

So many of the theaters that are in neighborhoods, they are on commercial strips that were once bustling, and now they’re commercial strips filled with bail bondsmen and liquor stores and dollar stores, and they’re not doing well. And the neighborhoods are not doing well overall. That’s a bigger issue than that particular building that happened to be a theater at one time.