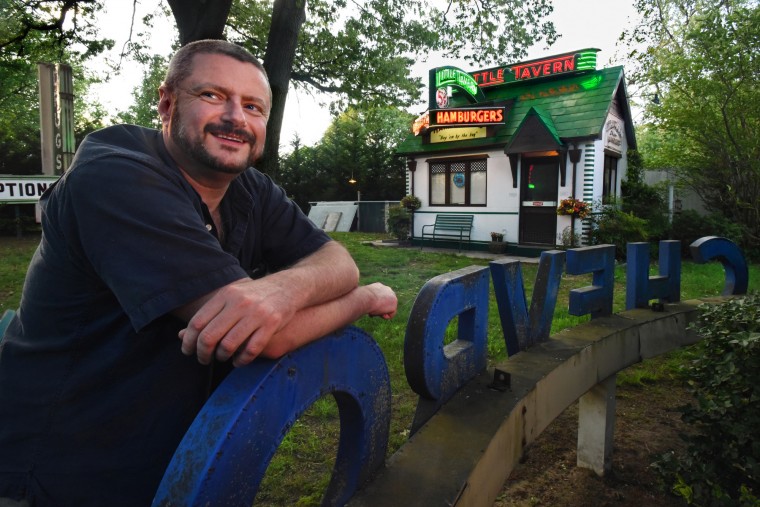 Norman James, 52, leans against the Luby Chevrolet sign, in his private backyard sign garden. He transformed a shed into an accurate replica of a Little Tavern to showcase his restored neon signs from the popular hamburger chain. (Amy Davis / Baltimore Sun) 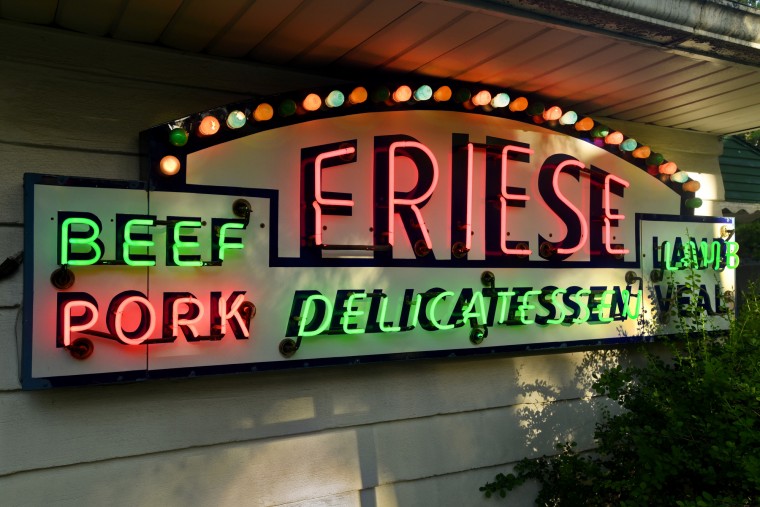 The Friese Delicatessen was part of a four-sided sign that hung over a stall at the Cross Street Market. It dates from 1952, when the market was rebuilt after a fire. The multi-colored incandescent bulbs scroll in sequence. (Amy Davis / Baltimore Sun) 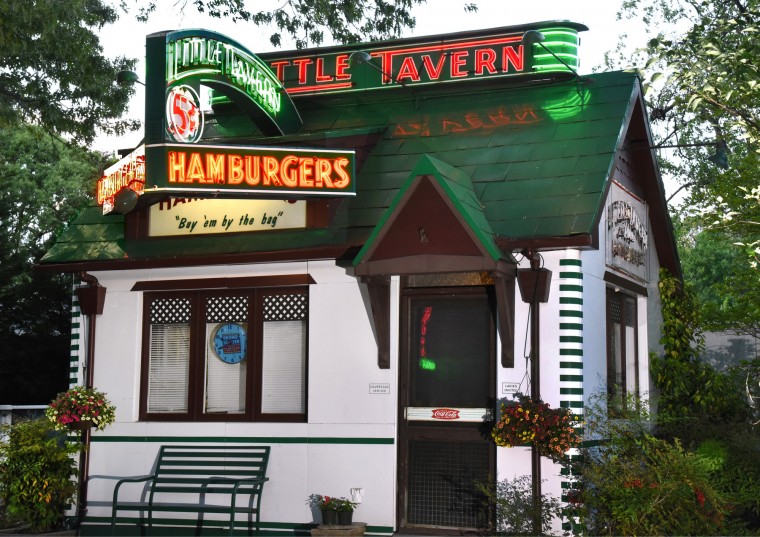 Norman James restored the salvaged neon signs from Little Tavern, and created a replica of the Laurel shop in the beloved hamburger chain to display the signs properly. (Amy Davis / Baltimore Sun) 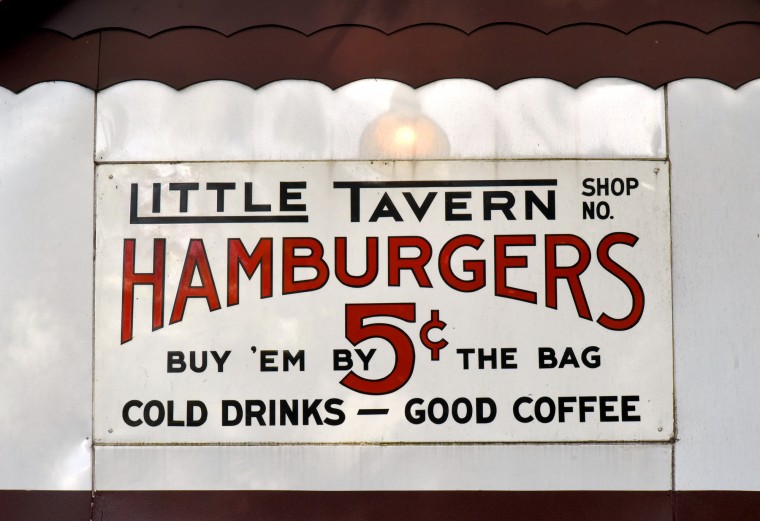 A pristine Little Tavern Hamburgers sign was found by Norman James at a sign company. There is no shop number, indicating that it was never used. (Amy Davis / Baltimore Sun) 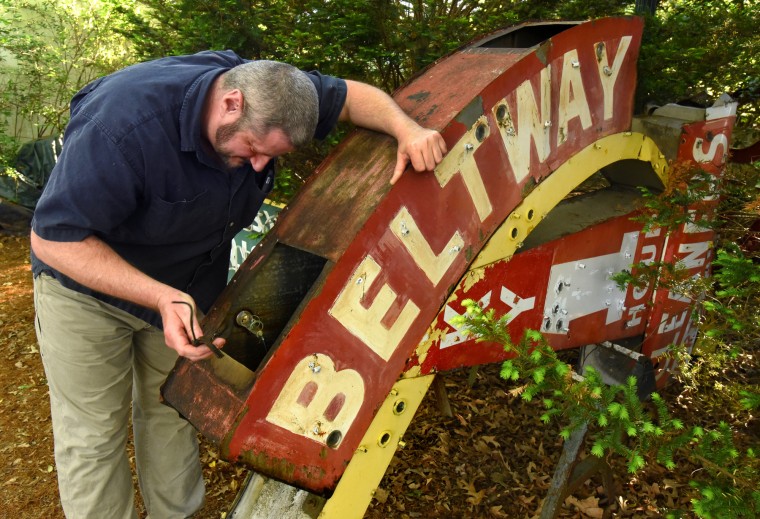 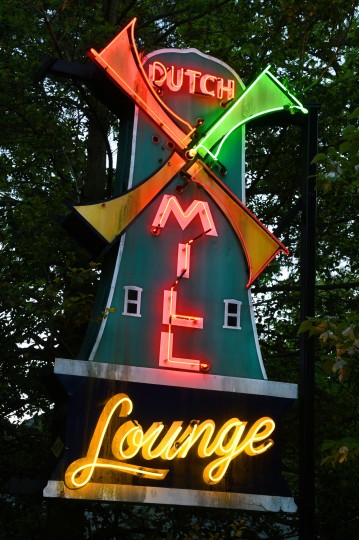 The Dutch Mill Lounge sign, from around 1952, was at Harford Road and Northern Parkway. When the animated neon windmill blades light up in sequence they appear to be spinning. The sign can be seen in John Waters’ movie, “A Dirty Shame.” (Amy Davis / Baltimore Sun) 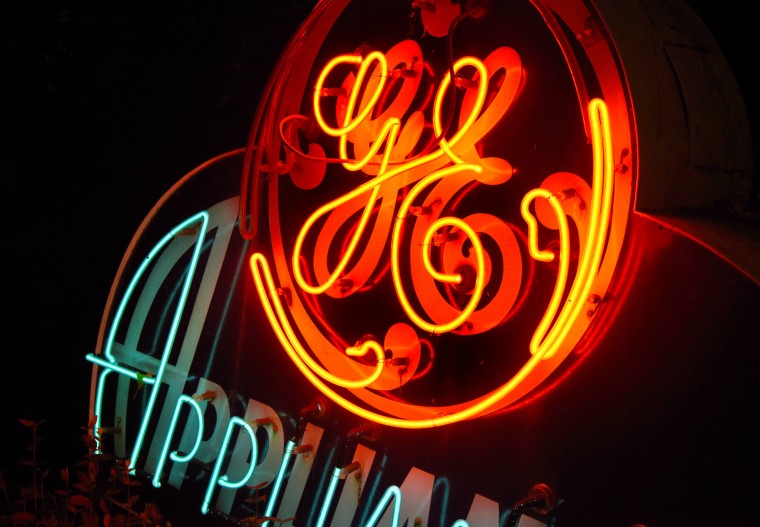 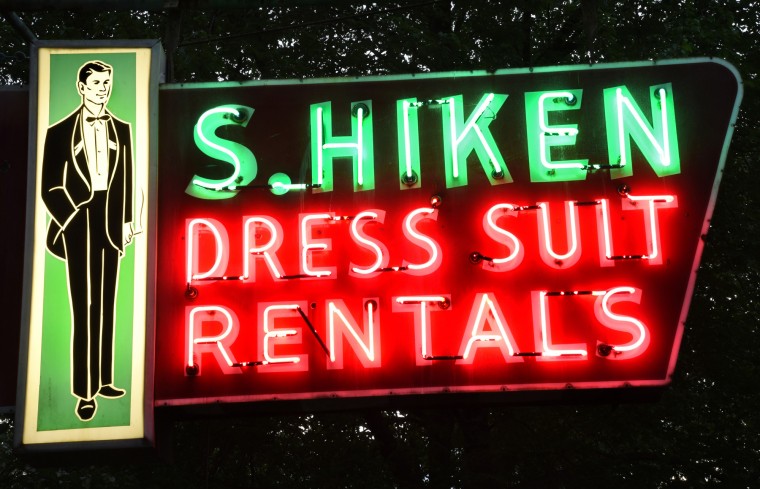 S. Hiken Dress Suit Rentals is from the flagship store for the formalwear chain, at Broadway and Baltimore Street. The 1954 combination sign represents the transition from neon on porcelain to backlit plastic in the 1950s. (Amy Davis / Baltimore Sun) 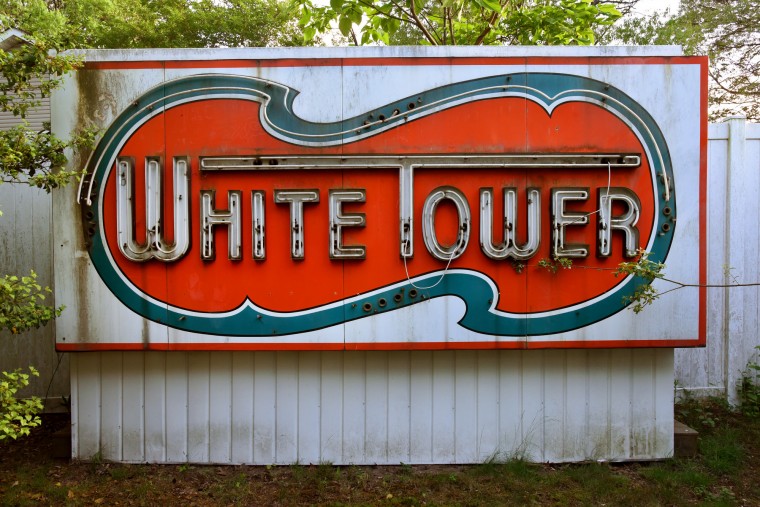 Neon was added to this White Tower sign in the mid-1950s, and it awaits rewiring by Norman James, who rescued it from the hamburger chain restaurant on Washington Boulevard and South Monroe Street near Montgomery Ward. The eight-foot high porcelain enamel sign was built by Belsinger Sign Works. (Amy Davis / Baltimore Sun) 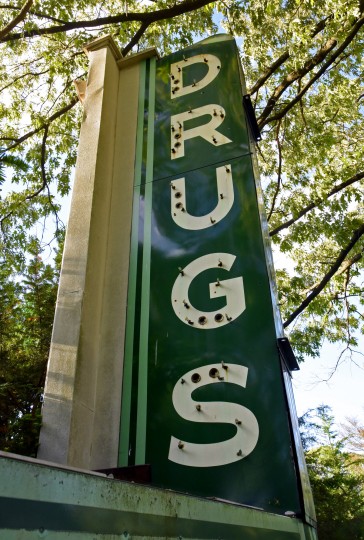 The center tower of the Woodlawn Pharmacy sign, a landmark on Windsor Mill Road, is 12-feet high and weighs 400 pounds. The green neon lettering needs to be recreated. (Amy Davis / Baltimore Sun) 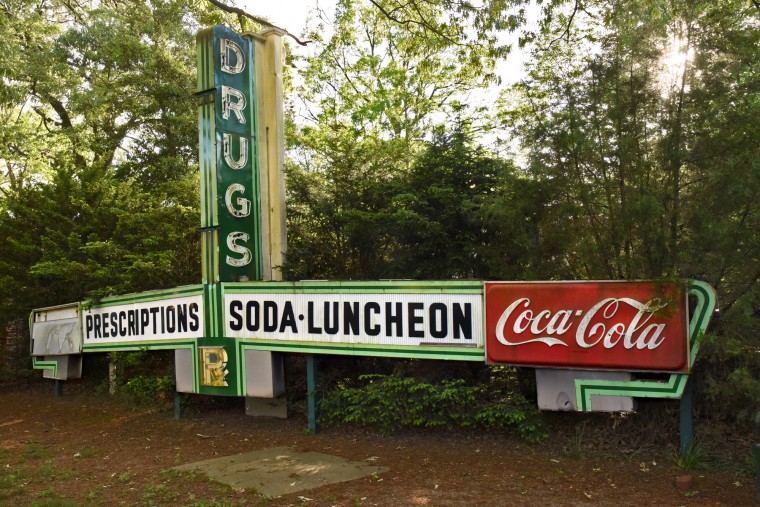 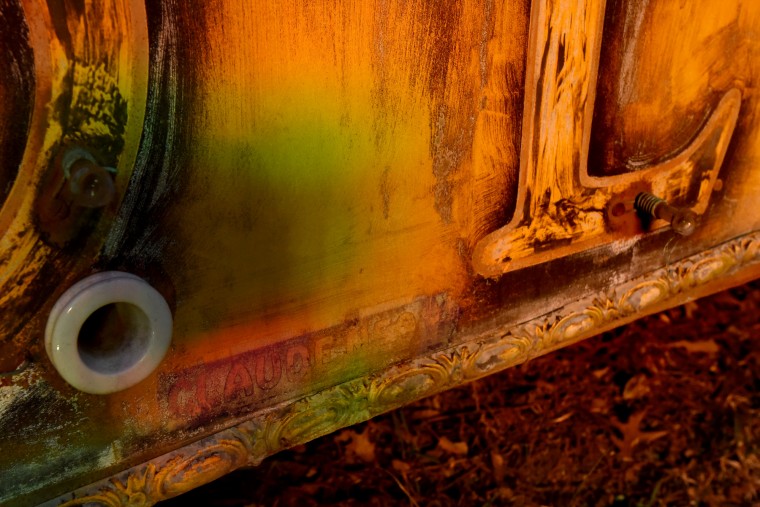 At the base of an elongated sign for the Carrollton Bank headquarters building at 1201 West Baltimore Street, above the pressed tin molding, is the name of one of early neon sign manufacturers, a Claude Neon franchise. (Amy Davis / Baltimore Sun) 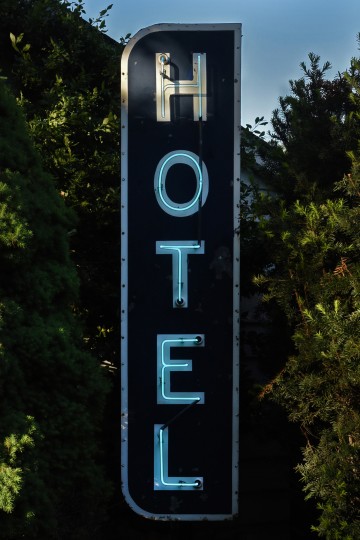 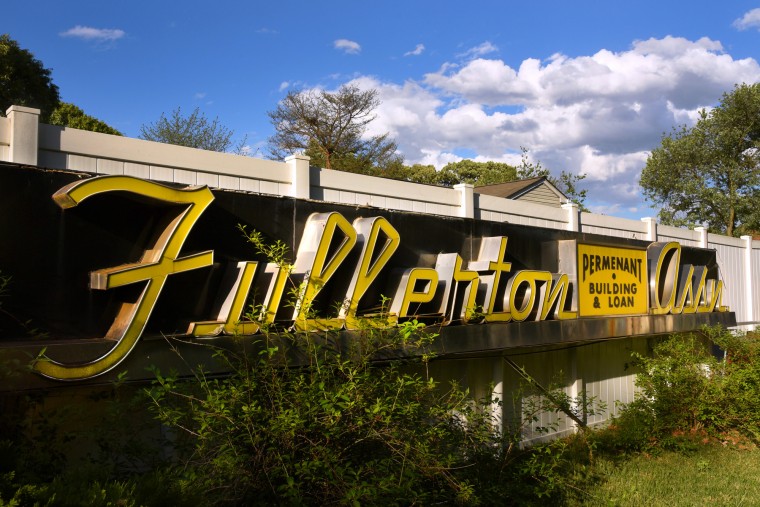 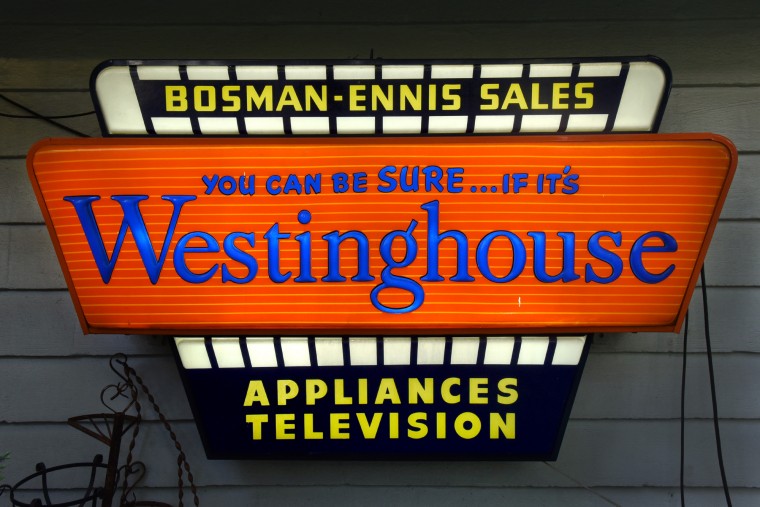 An example of a backlit fluorescent sign, from Bosman-Ennis Appliances in downtown Dundalk. These 1950s space-age plexiglas signs are rare because they are very brittle. (Amy Davis / Baltimore Sun) 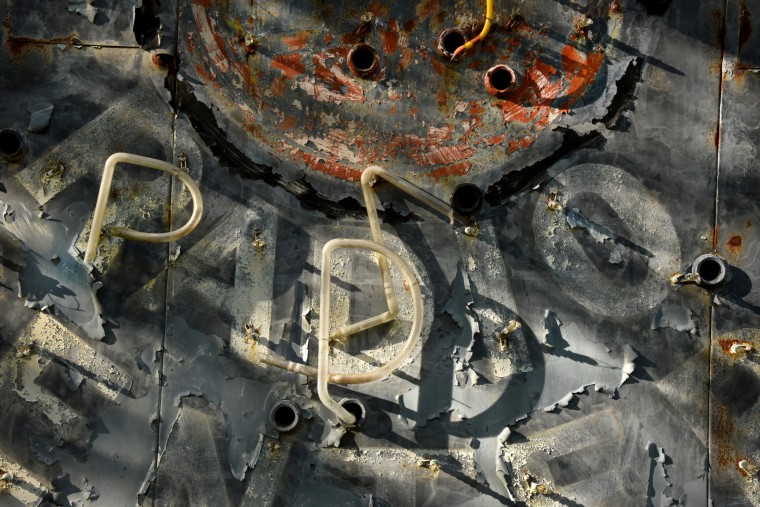 Detail of the 1952 RCA Victor Record Radio Center sign, in the shape of a record, which was at Greenmount Avenue and 32nd Street in Waverly. It awaits a complete restoration by Norman James. (Amy Davis / Baltimore Sun) 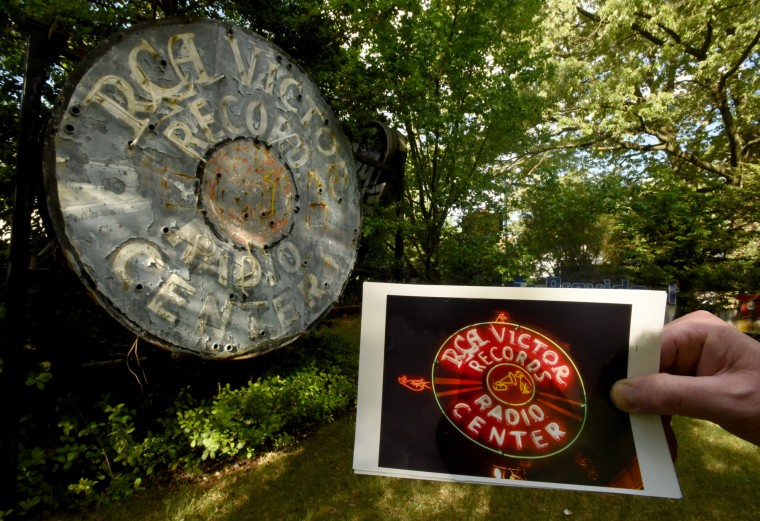 This very unusual steel sign from 1952 for the RCA Victor Record Radio Center was at Greenmount and 32nd Street in Waverly. Norman James holds a photo of how it appeared in operation, which will assist him in the restoration. The RCA dog, Little Nipper, was positioned as an eight-point flasher, and appeared to be running around the record. The record itself appeared to be spin, thanks to the sequence of flashing neon. (Amy Davis / Baltimore Sun) 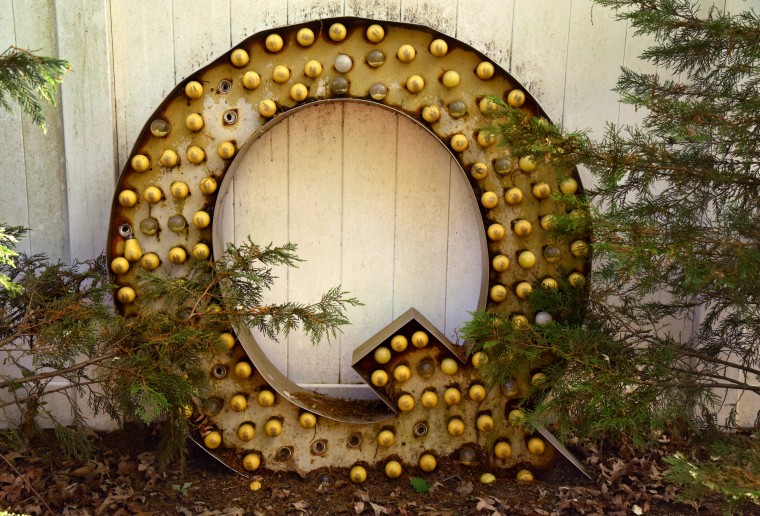 The 12-foot high stainless steel “Q” from the Circle BAR-B-Q on Dundalk Avenue is still recognizable to many who remember the popular drive-in restaurant. (Amy Davis / Baltimore Sun) 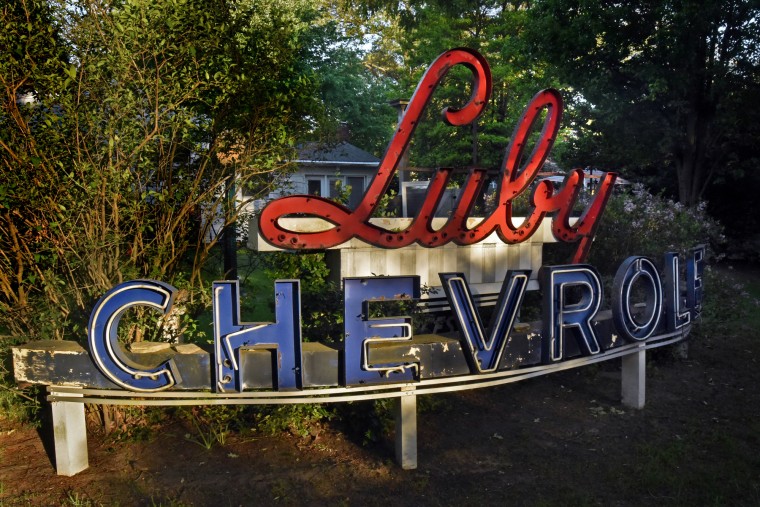 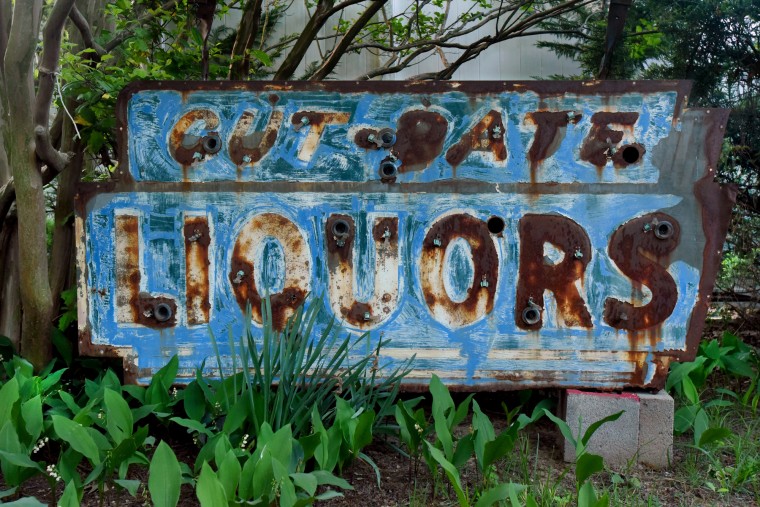 An example of a rescued sign bereft of its neon, with rust and faded paint, is from My Brother’s Place, a package goods store on Eastern Boulevard near Dundalk Avenue. (Amy Davis / Baltimore Sun) 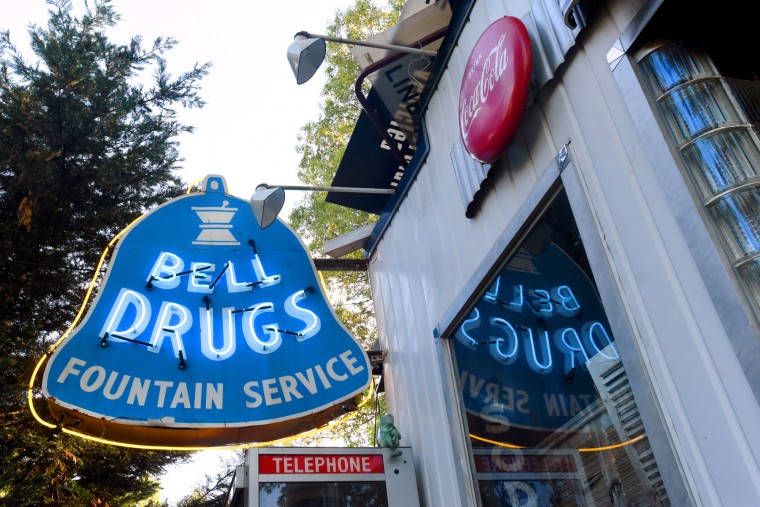 Norman James restored the neon in the 1952 Bell Drugs sign, from the pharmacy at Belair Road and Northern Parkway. It didn’t ring, but the flashing neon outline around the bell made it a landmark. (Amy Davis / Baltimore Sun) 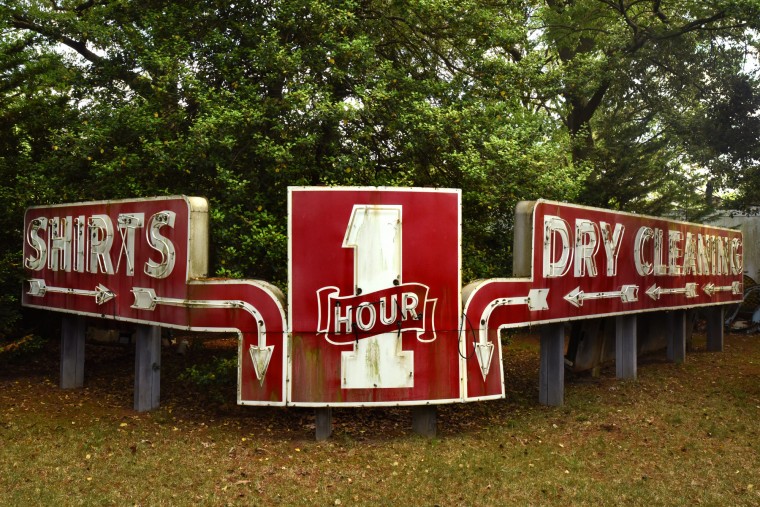 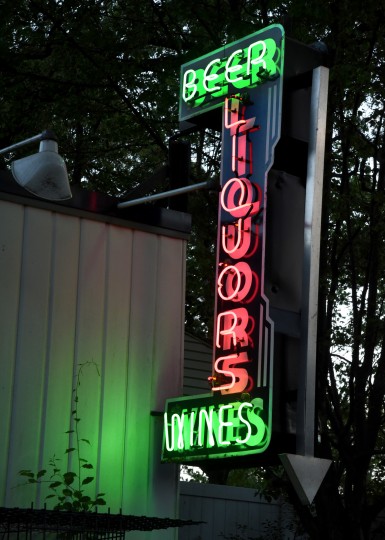 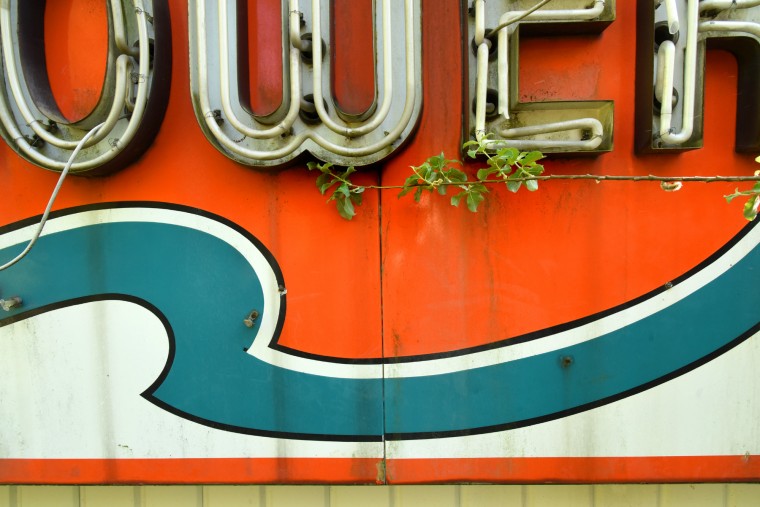 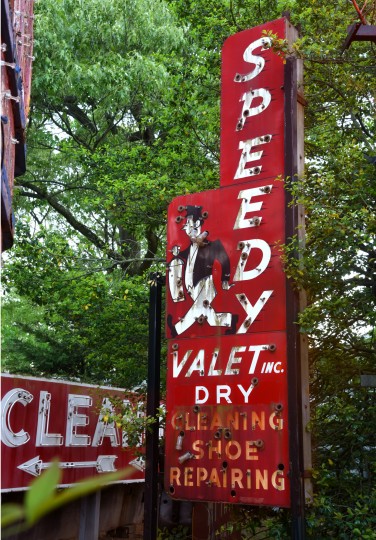 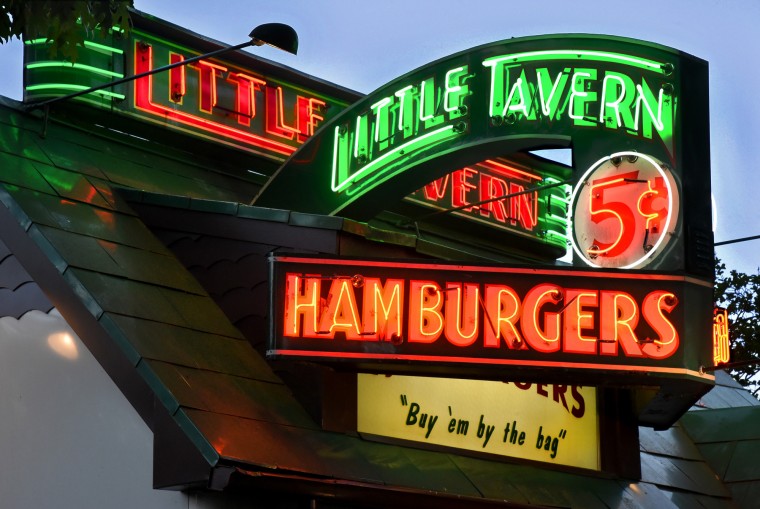 Norman James completely restored the iconic Little Tavern Hamburgers signs and built a replica restaurant from a shed to display them. He fabricated every tile on the roof by hand. (Amy Davis / Baltimore Sun) 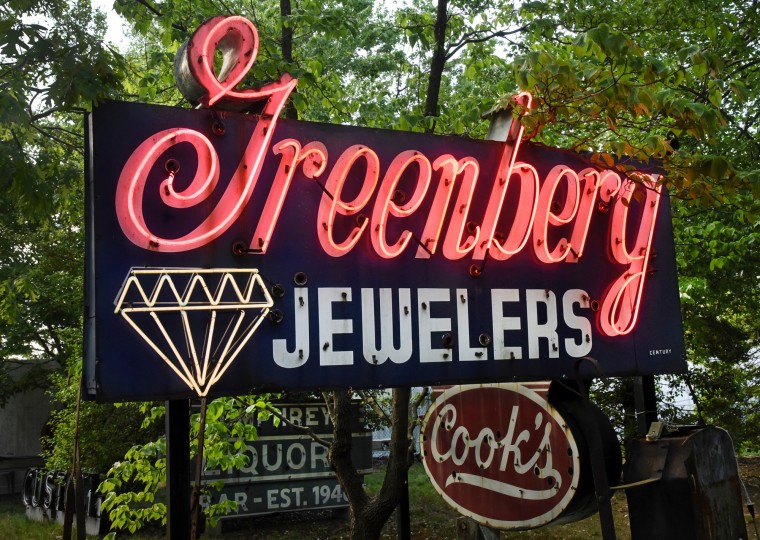 The animated diamond in the 1956 Greenberg Jewelers sign flashed as cars drove past on Ritchie Highway at Church Street in Brooklyn Park. (Amy Davis / Baltimore Sun) 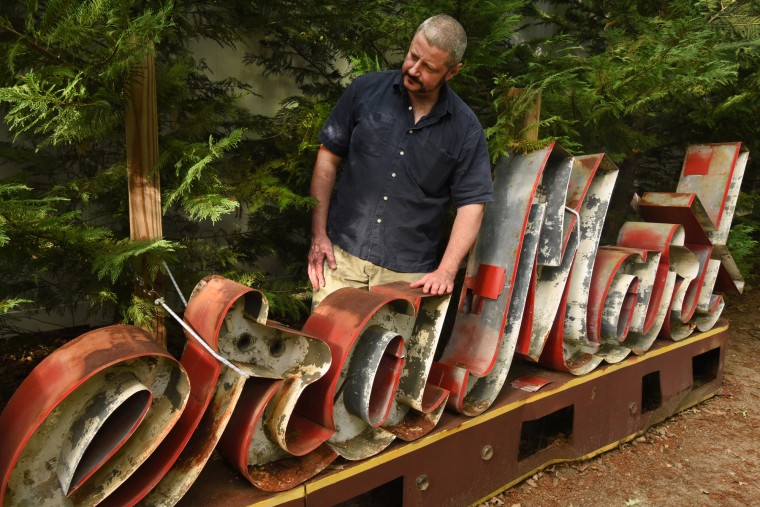 Norman James examines a two-color channel neon sign from the 1950s, which was displayed on the roof of Cooper’s Camera Mart on Harford Road in Hamilton. James carefully removes the rust, repaints and rewires these salvaged signs. He traces the shape of the channel letters so that a neon glass craftsman can create the exact form for the neon letters. (Amy Davis / Baltimore Sun) 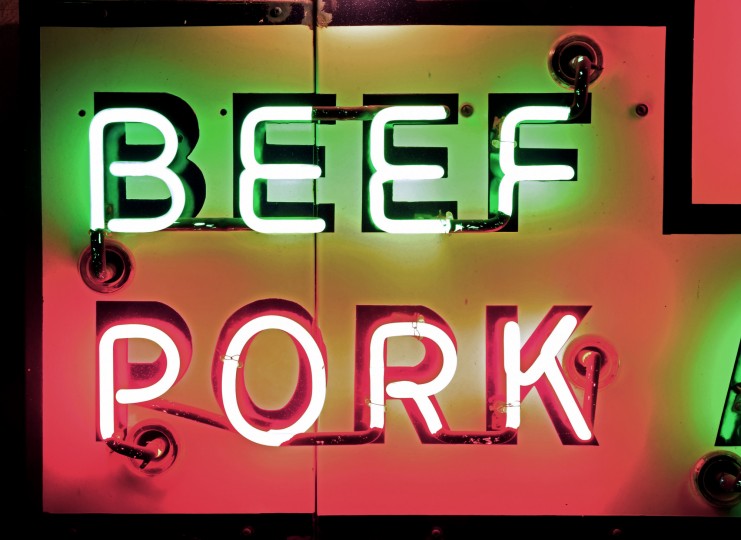 Green and pink neon reflects off the porcelain backing of the Friese Delicatessen sign from the Cross Street Market. The sign dates back to 1952, when the South Baltimore market was rebuilt after a fire. (Amy Davis / Baltimore Sun) 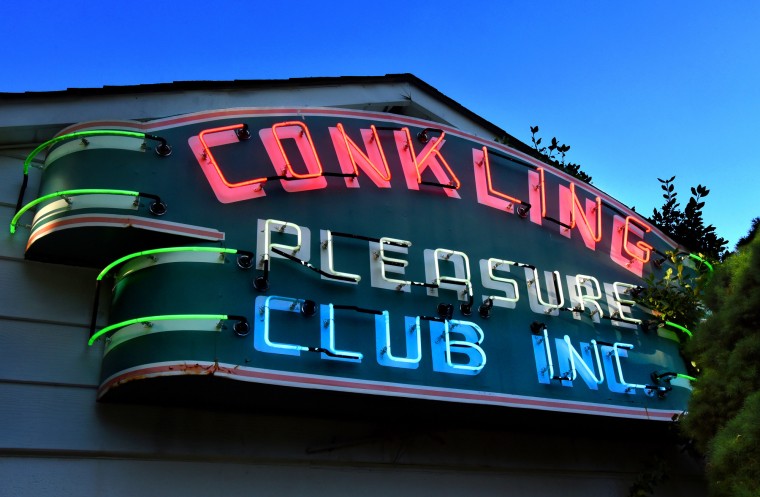 The 1930s Conkling Pleasure Club Inc. neon sign hung outside an old school Democratic club at Conkling and Dillon Streets. James got the sign, which still had its original neon units, when the building was torn down. (Amy Davis / Baltimore Sun)

Unusual man-made perennials sprout between the shrubs in a secluded backyard garden in suburban Glen Burnie. Some are blooming brightly, in glowing shades of green, yellow, pink, blue and red neon. Other specimen plantings need more tending, their stalwart steel frames in need of maintenance. The gardener of this remarkable sign garden is Norman James, 52, who has been saving these beauties since he was 19. A veteran craftsman in the sign trade in Baltimore, James rehabilitates his private garden with the same tools he uses to create custom signage. His irrigation system is electricity, but before these rusted relics can flourish again, they need sanding, painting, safer wiring, and replacement parts that James meticulously fabricates or commissions from neon craftsmen.

When Norman James was a child, he enjoyed drawing commercial buildings and the elaborate neon signs he saw on Ritchie Highway. Each sign is a paean to vanished Baltimore businesses that hawked their services with bright neon, flashing lights, and colorful backlit plastic signs that often became neighborhood landmarks. Perhaps none resonates more than his homage to the Little Tavern. To properly display the signs he restored from this iconic restaurant chain, James constructed a full-scale replica building, modeled after the former hamburger shop in Laurel.

James recalls that “They disappeared so gradually, and no one noticed. There was competition between the sign men to outdo each other. No computers; you had to be an artist of light.” Sadly, the city equated projecting signage with blight. “With rare exceptions, they all came down, ” James lamented. Like any garden, this homage to Baltimore’s past requires costly and time-consuming ongoing maintenance. Norman James hopes his preserved signs will “be there for future generations to look at in museums. I don’t collect signs, I rescue them.”