On Friday, Sotterley Plantation in St. Mary’s County opened its only remaining slave cabin to the public and dedicated it to the memory of Agnes Kane Callum, a genealogist whose own grandfather was a slave at Sotterley. 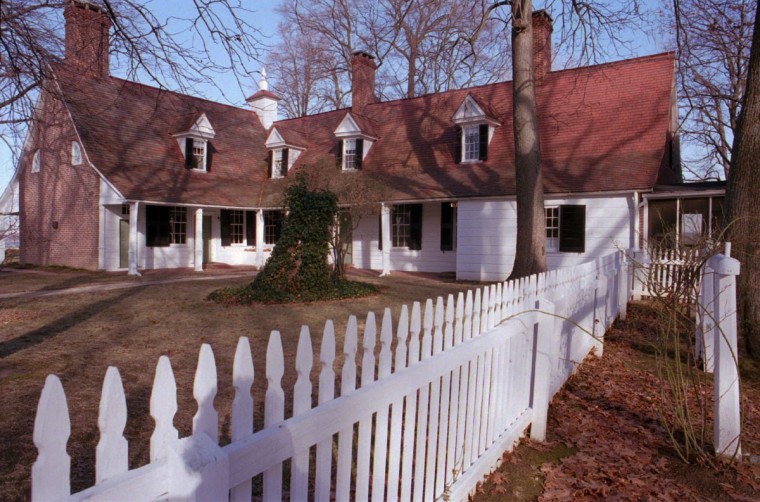 Hollywood, MD–Sotterley Plantation, dating back to 1717, is closed due to lack of funds, and needs expensive structural repairs. Sotterly Mansion exterior, views from driveway side, where people enter. 1/4/96 Photo by Amy Davis/Staff 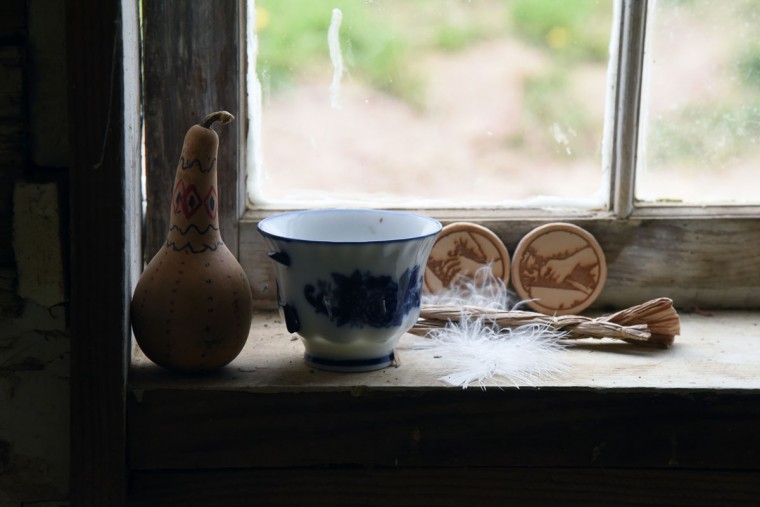 Hollywood, Md–4/19/17–Items placed in the window in the Slave Cabin Exhibit at Sotterley Plantation. The exhibit will be dedicated to the memory of Agnes Kane Callum on Friday. Kim Hairston/Baltimore Sun. 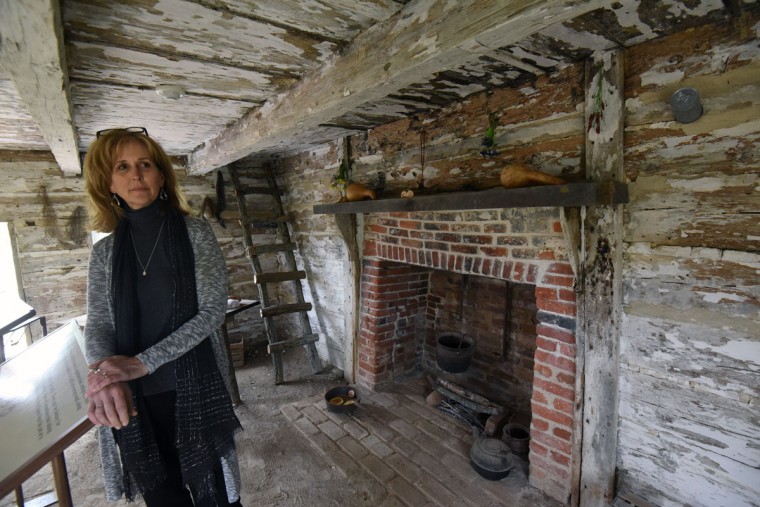 Hollywood, Md–4/19/17–Nancy Easterling, executive director of Sotterley Plantation, inside the Slave Cabin Exhibit that will be dedicated to the memory of Agnes Kane Callum on Friday. Kim Hairston/Baltimore Sun. 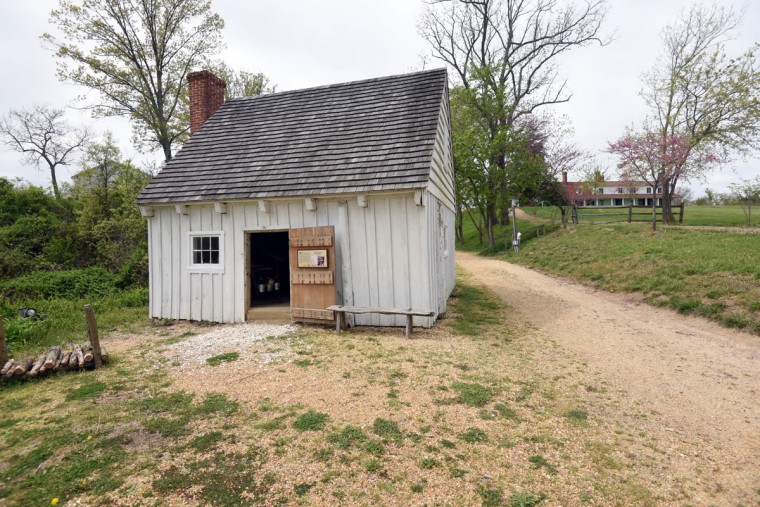 Hollywood, Md–4/19/17–The only remaining slave cabin at Sotterley Plantation will be opened as an exhibit and dedicated to the memory of Agnes Kane Callum on Friday. Kim Hairston/Baltimore Sun. 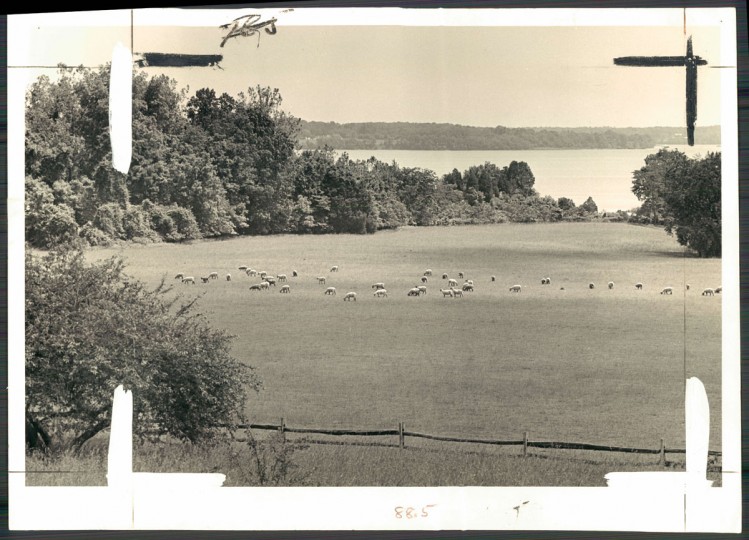 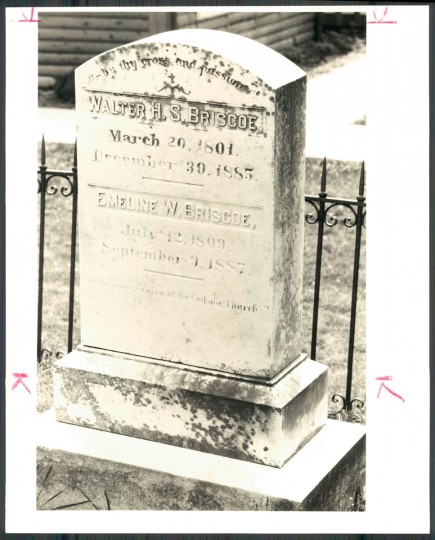 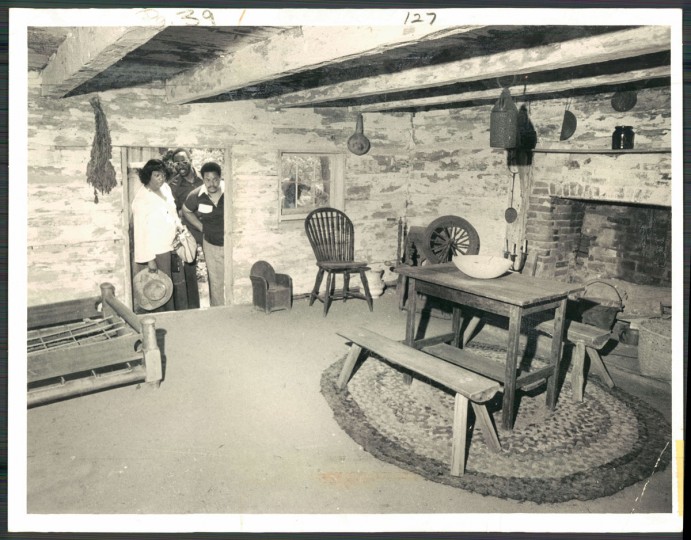 Inside the cabin at Sotterley Plantation, photo dated May 22, 1978. (Baltimore Sun archives) 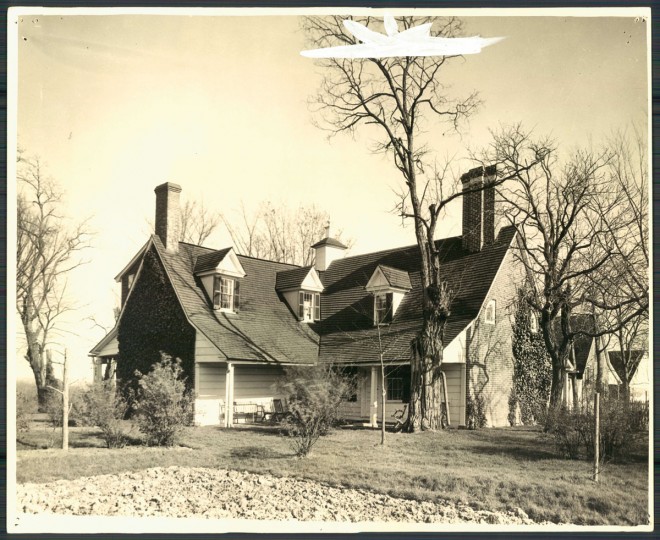 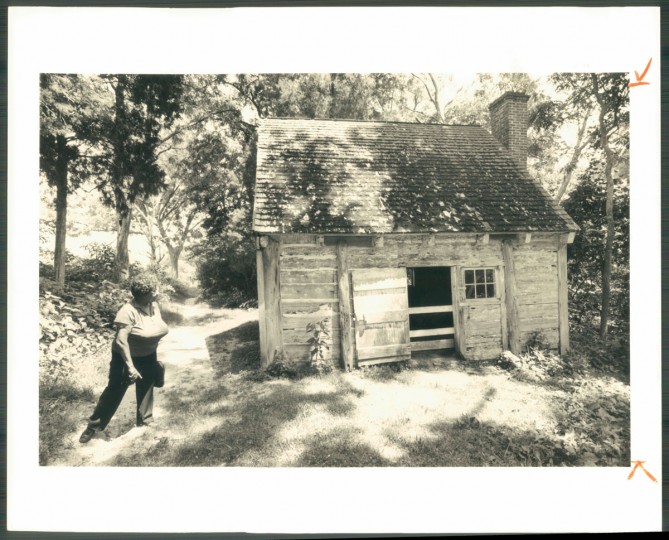 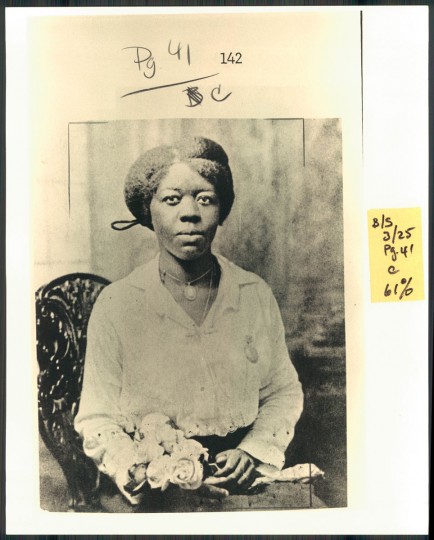 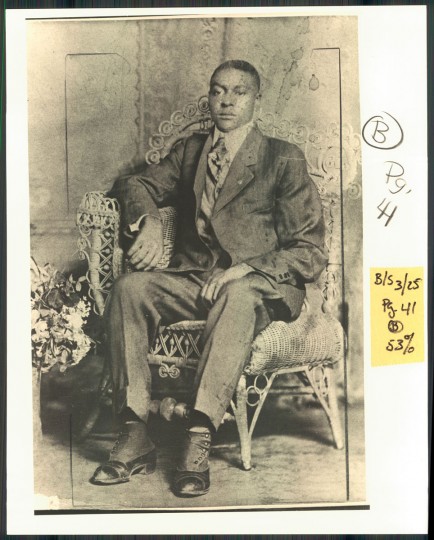 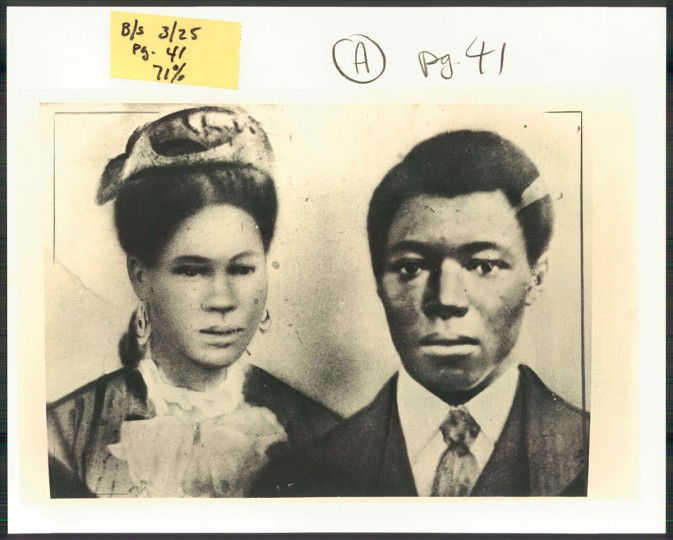 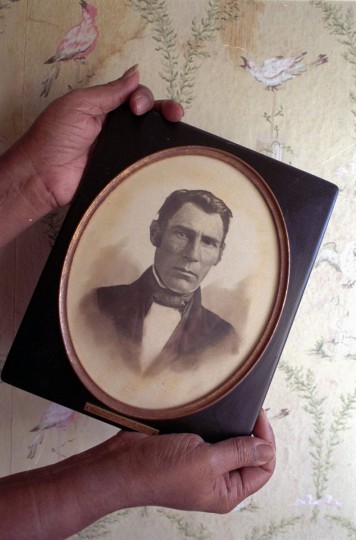 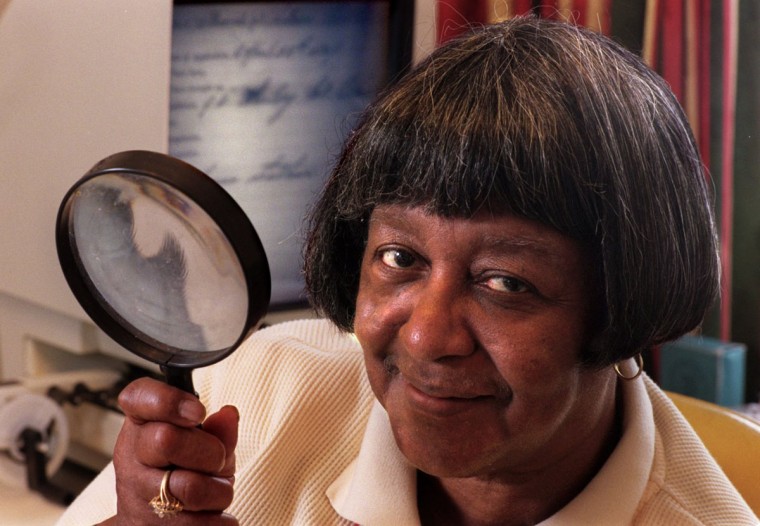 BALTIMORE, MD – February 4, 1999 – Staff/Amy Davis — Agnes Kane Callum, the dean of African-American genealogists, at home in Northeast Baltimore, where she does research on Maryland black history. She uses a magnifying glass to decipher documents on her microfilm reader, which is behind her. 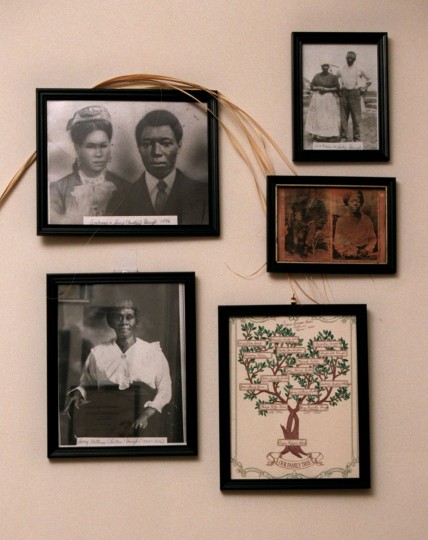 BALTIMORE, MD – February 4, 1999 – Staff/Amy Davis — Agnes Callum, dean of African-American genealogists, has display of old photographs in herdining room, where she does her genealogy research. The three largest photos (top left, top right, and bottom left) are of her maternal grandparents, Lucy and Ambrose Gough. At bottom right is her family tree, and above that, newspaper reproductions of her parents, Philip and Mary Kane. 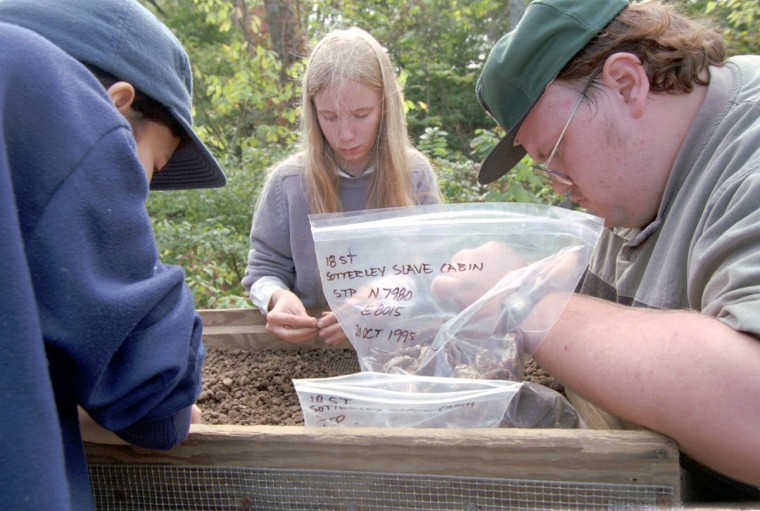 October 20, 1995–Sotterley is a 1717 plantation house. Its slave cabin is one of the oldest in MD still in its original location. The Sotterley Mansion Foundation, the MD Historical Trust, Preservation MD and others have funded restoration of the cabin. As part of that work, archaelogists with the Colonial Williamsburg Foundation and St. Mary’s College are doing excavations in and around the cabin to learn more about the lives of the slaves. L to R: Maggie Eng, 18, Carolyn Proctor, 20, and James Beaver, 21 from St. Mary’s archaelogy class help to pick oyster shells and piece of pottery from the dirt. Photo by Chiaki Kawajiri/staff 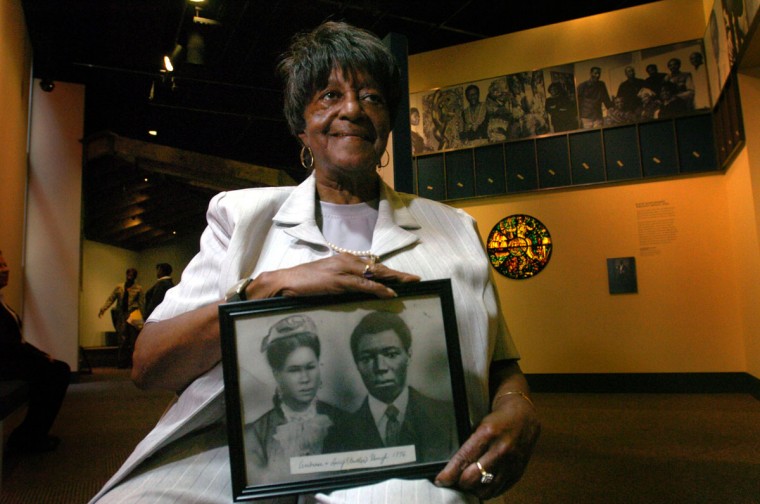 Baltimore, MD–6/21/05–Agnes Kane Callum, 80, went to college for the first time as an adult and won a Fulbright after age 50. She has traced her family back to the 17th century. The photo she holds is of her grandmother, Lucy V. (Butler) Gough (1851-1932) and grandfather, Ambrose F. Gough (1852-1930). Images of her grandparents and other family members will be on display along with her genealogy chart in the Reginald F. Lewis Museum of Maryland African American History & Culture. Kim Hairston/Baltimore Sun staff. digital image 0096. 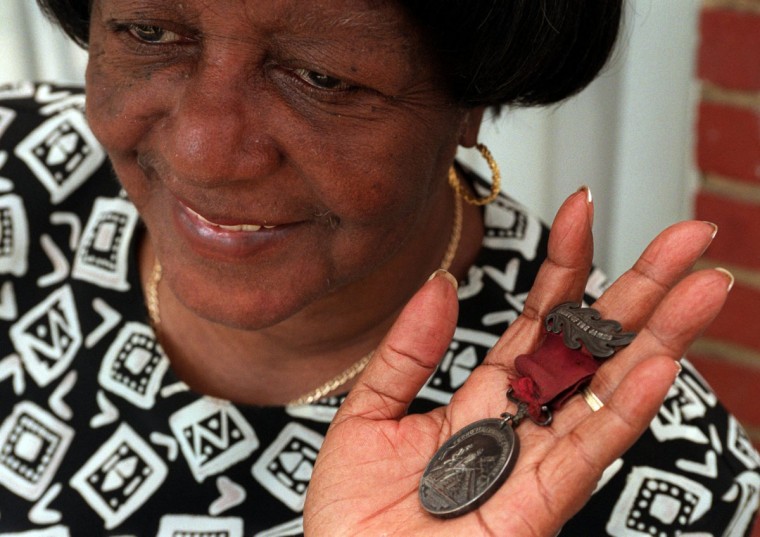 Baltimore, MD–July 17, 2001–staff photo/Barbara Haddock Taylor. Agnes Kane Callum of Baltimore holds a Butler medal which was given to African American soldier Gilbert Harris during the Civil War. It is one of only 4 of such medals which survive today. It was given to her by a friend many years ago. It belonged to the friend’s grandfather, who was Gilbert Harris.

Agnes Callum Kane only slept four and a half hours a night. She must have spent much of the remaining 19.5 hours doing research.

On her maternal side, Callum could trace her own lineage back to the 1600s: to an Irish woman named Eleanor Butler who had come to the New World as an indentured servant, a washerwoman for the third Lord Baltimore. In Maryland, Butler fell in love with an enslaved man, whose name in public records was “Negro Charles.” The couple got married, against the advice of Lord Baltimore, as Meredith Newman wrote for The Capital Gazette last year.

The couple’s children sued for their freedom; the long and complex court case that resulted provided Callum substantial documentation to learn about her ancestors.

“I feel glad to know that I had such a vested interest in Maryland,” Callum said in a 1991 Sun interview. “In 1681, my people weren’t even in Africa. They were in Maryland.”

Callum also discovered that her father’s ancestors had been slaves at Sotterley Plantation around the time of the Civil War.

“I know this,” she said. “After the Civil War my people stayed on the plantation until (their former slave owner) died. They didn’t have to.”

The first time she came to visit Sotterley, Callum found that the slave cabin was off-limits to the public. Undeterred, she spent years bringing relatives, friends and students to the plantation by bus (it’s about a two-hour drive from Baltimore) and sharing stories about the lives of enslaved people she had heard from family members.

Though many Americans, have avoided talking extensively about slavery due to shame and discomfort with the past, Callum was proud of her enslaved family members, she told The Sun in 1984. Not because they did anything outstanding or memorable, but simply because they survived in the face of such an oppressive system.

“I feel so proud to be one of them,” she told The Sun’s Dan Rodricks. “As far as I have researched, I have not found any incidents where my people did anything outstanding, nor did they do anything criminal or unjust against anyone. So I’m proud that they could survive the system [of slavery]. I look at the slave cabins, 12-by-12 rooms with a dirt floor and cracks in the walls, and yet they still survived.”

In the 1990s, Callum became the first African-American member of the museum’s board of directors. This past weekend, Sotterley paid tribute to her life’s work by naming the 1830s-era slave cabin near the main mansion in her honor.

Callum would not live to see it. The woman who needed so little sleep finally died in 2015 at the age of 90.