From the vault: Remembering ‘The Greatest Show on Earth’

A look back at the Ringling Bros. circus, which first came to Baltimore in 1898. 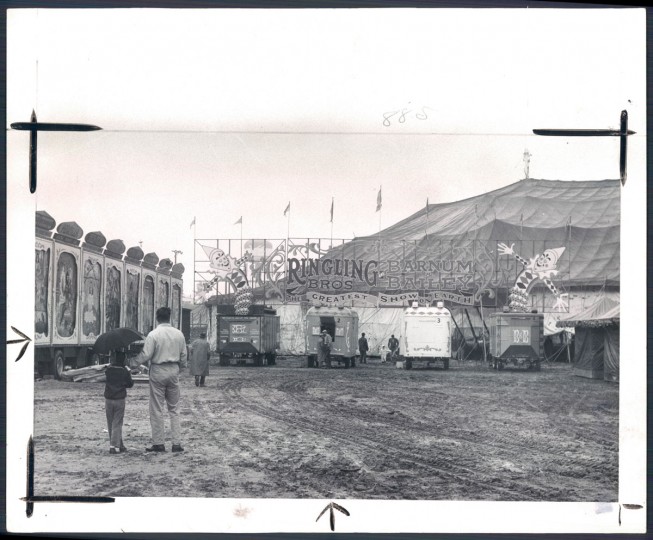 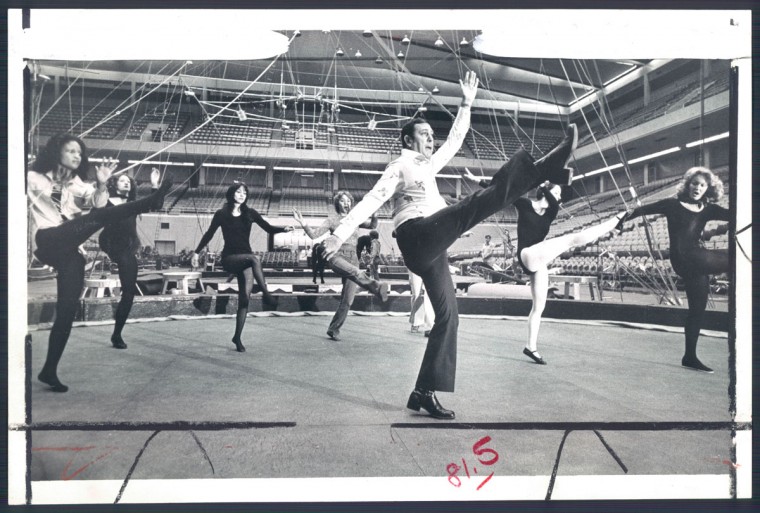 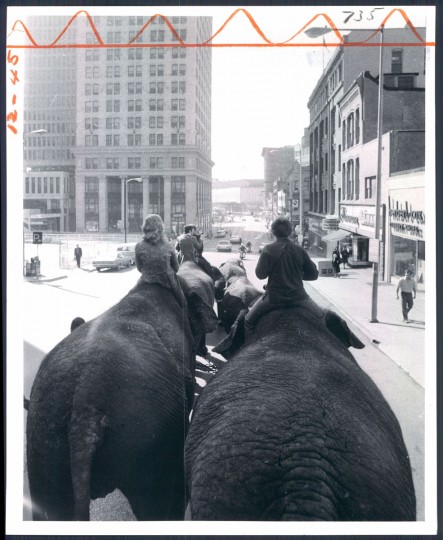 Elephants with the Ringling Brothers Circus parade through Baltimore in 1972. (Baltimore Sun) 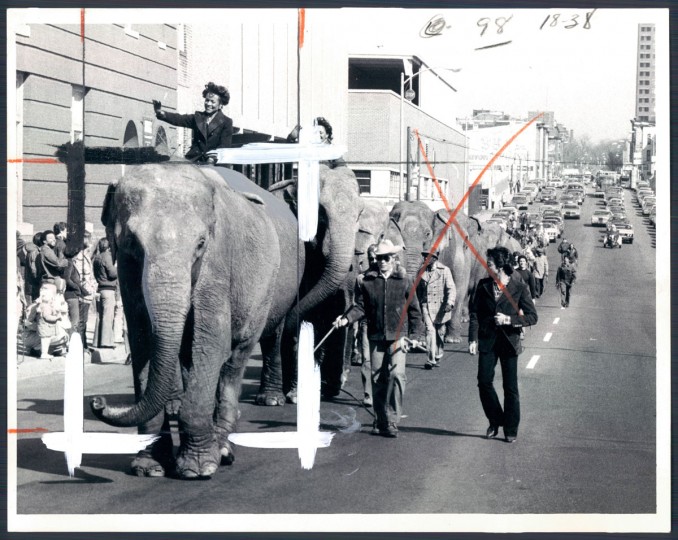 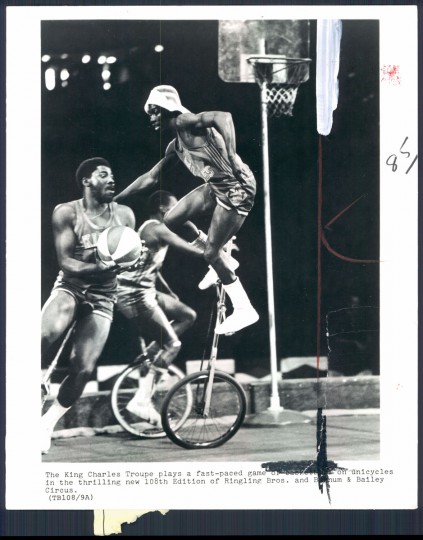 Performers with the Ringling Brothers Circus in 1978. (Baltimore Sun) 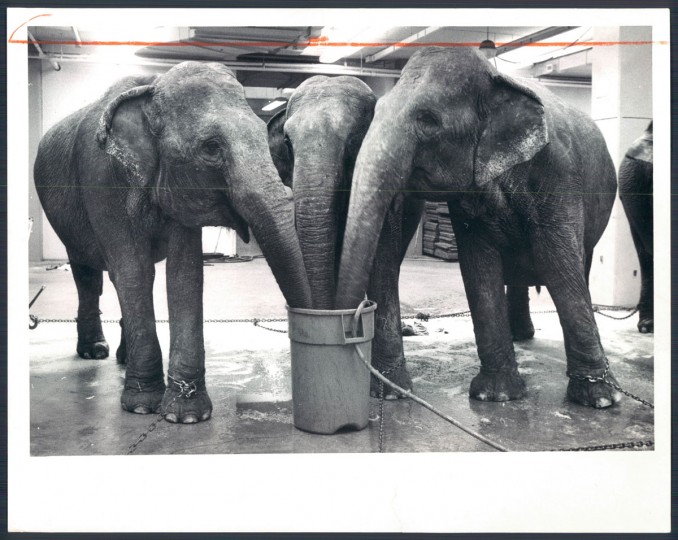 Elephants with the Ringling Brothers Circus in 1977. (Baltimore Sun) 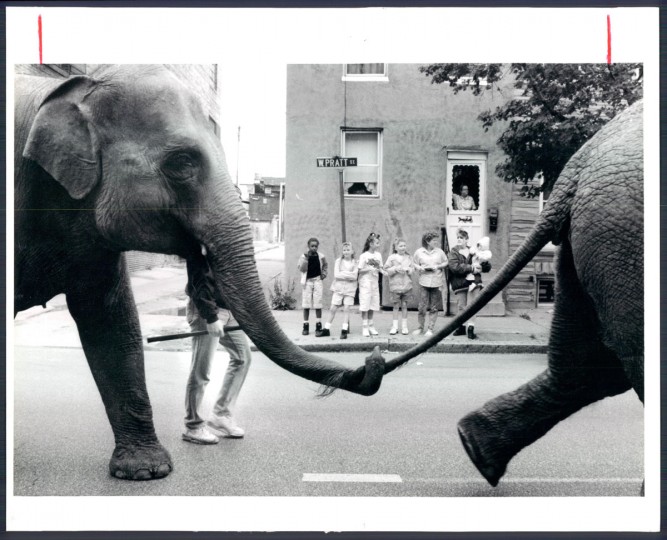 West Baltimore Residents watch as the Ringling Bros. Circus animals travel east on West Pratt as they parade to the Baltimore Arena in 1992. (Baltimore Sun) 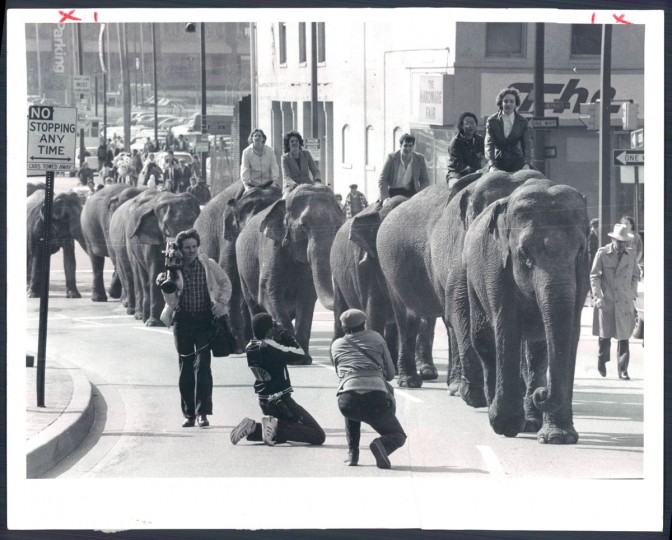 Elephants parade through the city in 1983. (Baltimore Sun) 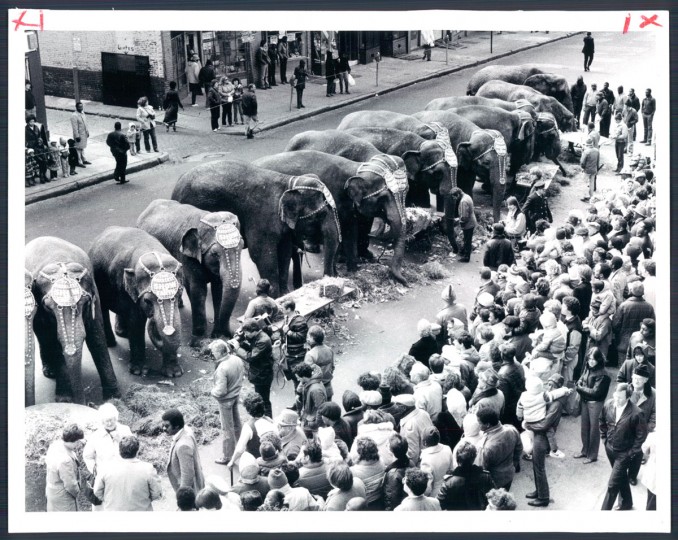 Jumbo luncheon Lexington Market merchants treated rs fr ant ley Circu to lunch at the yesterday giving the hard working pachyderms a chance to relax and make pigs of themselves. At meal s end the elephants had consumed more than 100 pounds of kale hay potatoes carrots oranges apples and tomatoes. Though the elephants swept their tables clean with their trunks the stars of The Greatest Show on Earth still managed to leave behind the greatest mess on Lexington street in 1983. (The Sun/Joseph A. DiPaola) 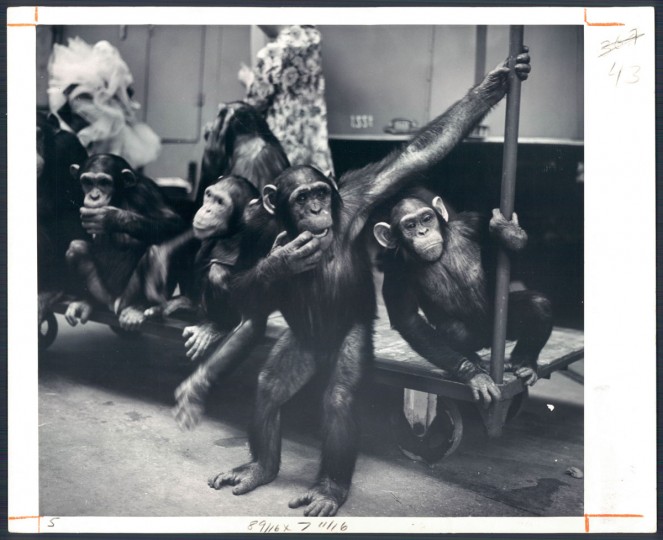 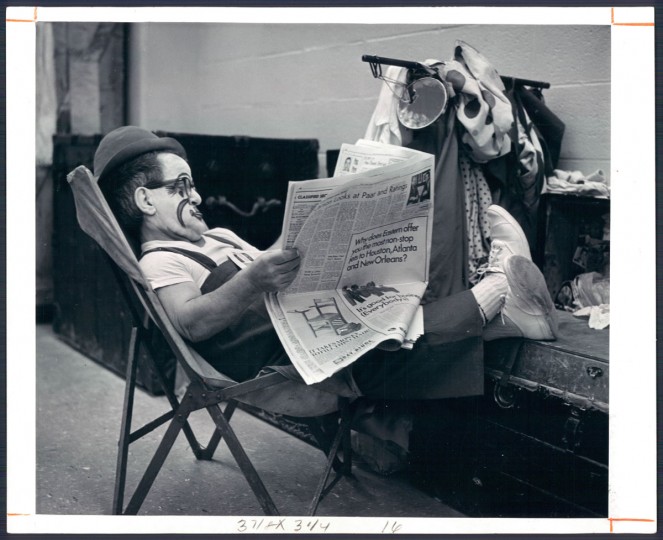 Performer with Ringling Brothers reads the newspapers in 1966. (Baltimore Sun) 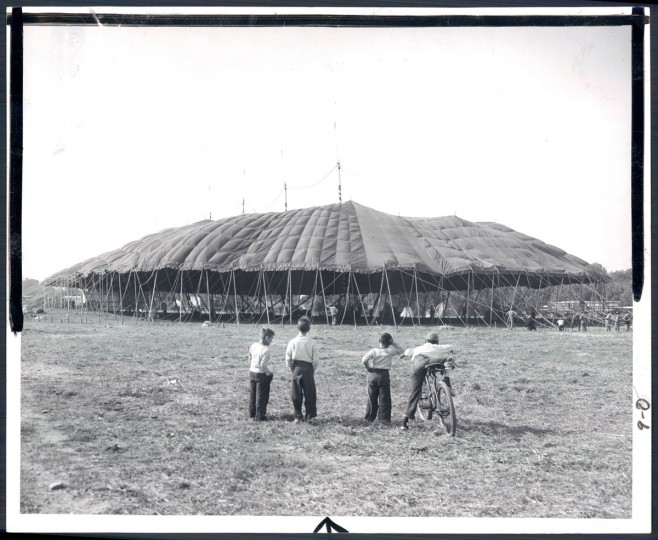 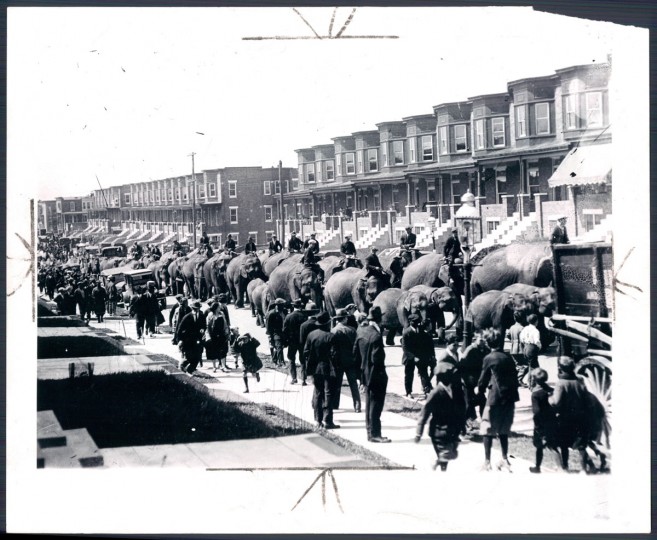 May 20, 1956 – Ringling BARNUM AND BAILEY CIRCUS — This photograph taken over 30 years ago depicts elephants arriving at Edmondson Street and parading up Bentalou Street to circus grounds. Photo taken by Baltimore Sun Staff Photographer Leroy B. Merriken. 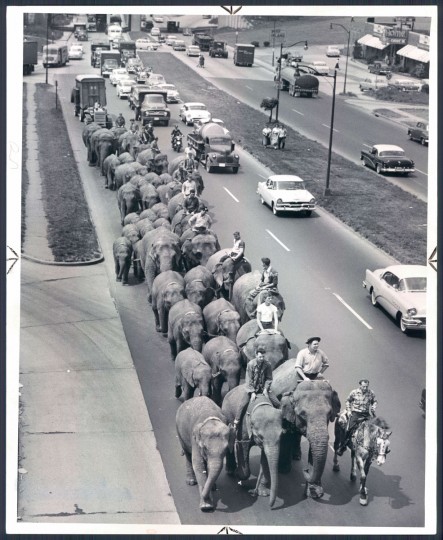 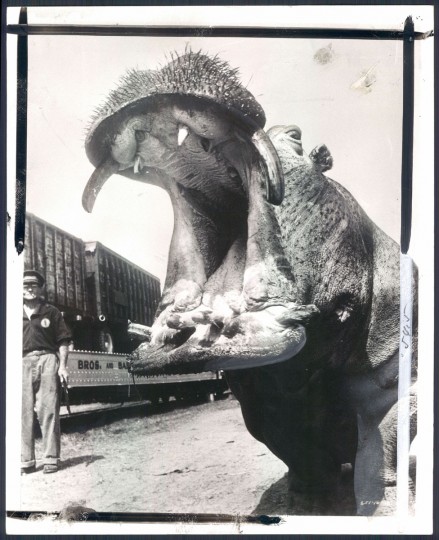 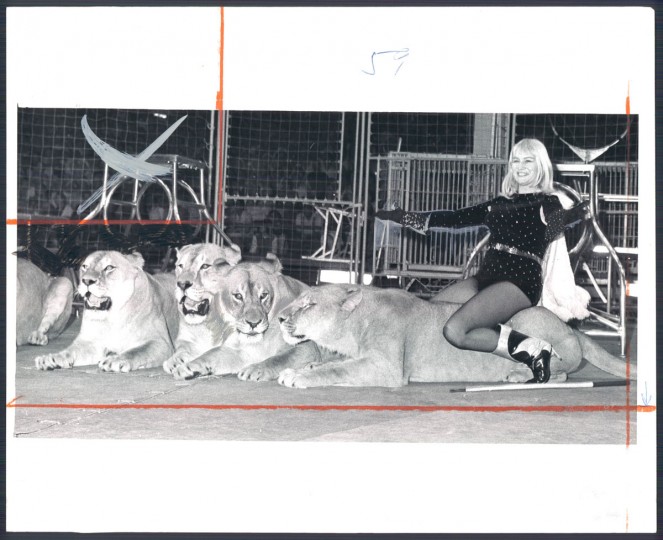 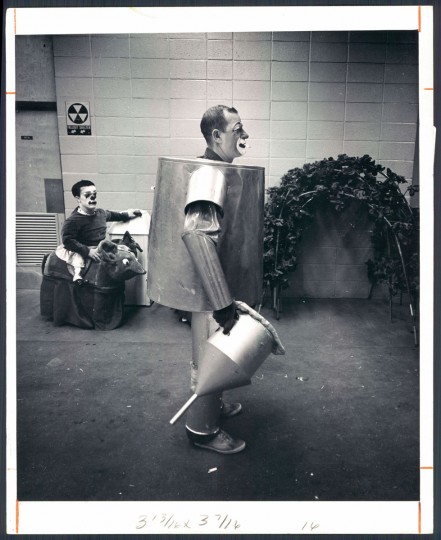 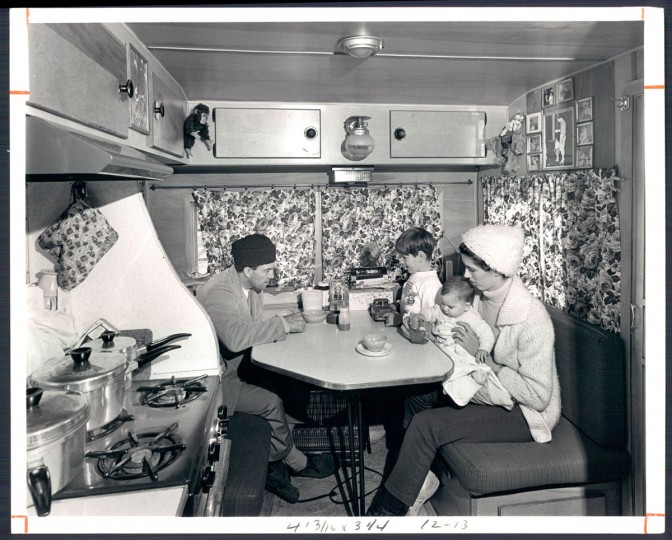 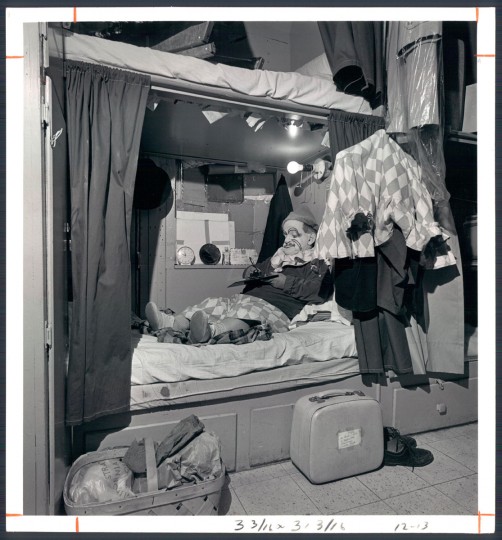 Behind-the-scenes of the Ringling Brothers Circus in 1968. (Baltimore Sun) 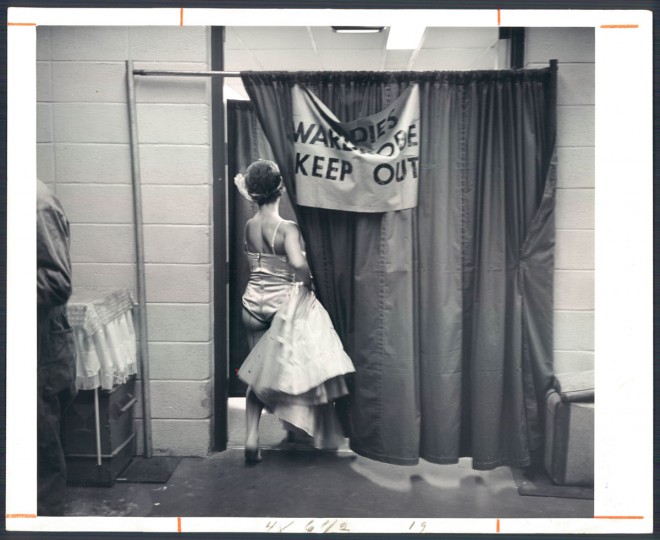 1966: A temporary curtain marks off the Ladies Wardrobe section and warns all others to Keep Out. (Baltimore Sun) 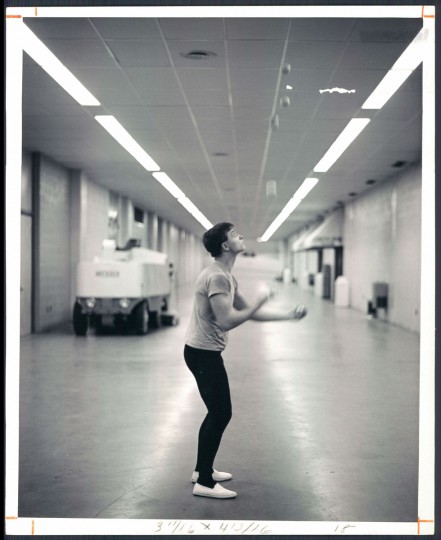 Warming up for his juggling act, 1966. (Baltimore Sun) 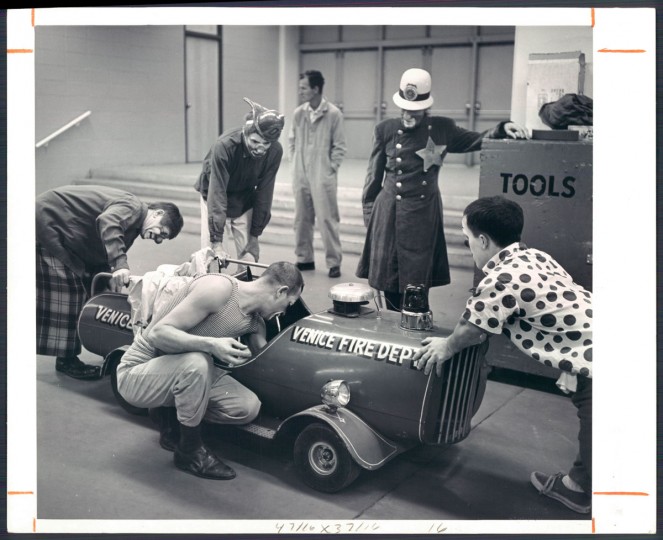 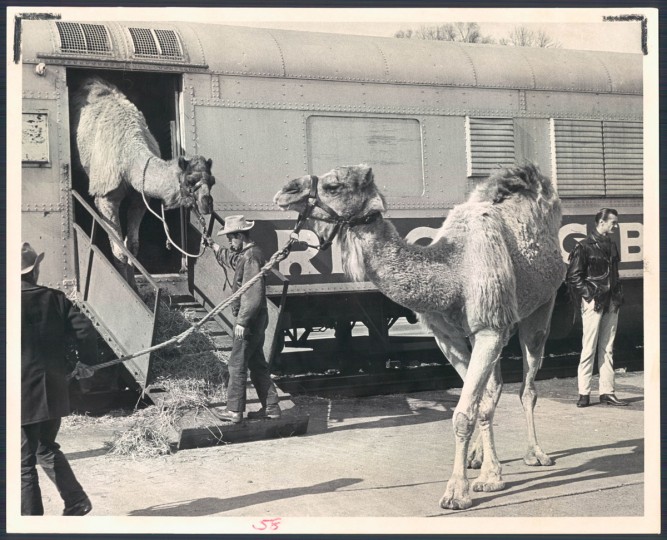 Camels at the Ringling Brothers circus in 1967. (Baltimore Sun) 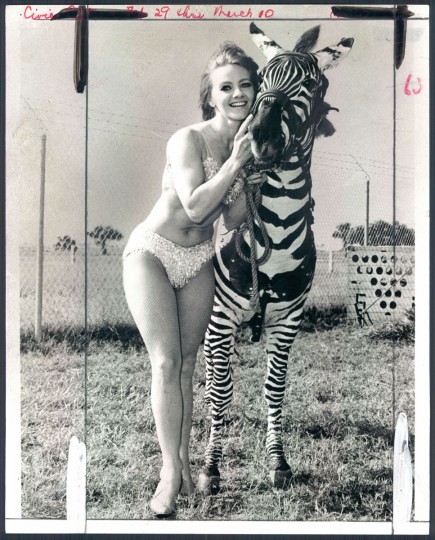 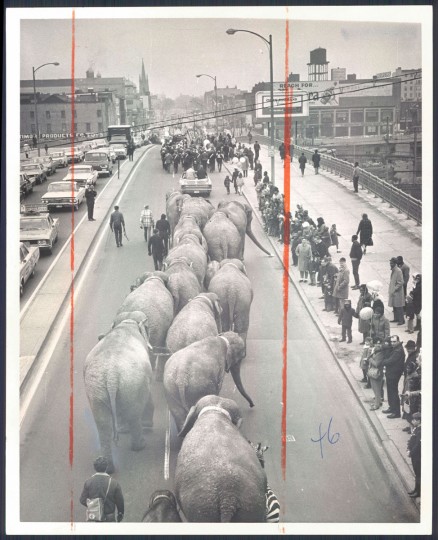 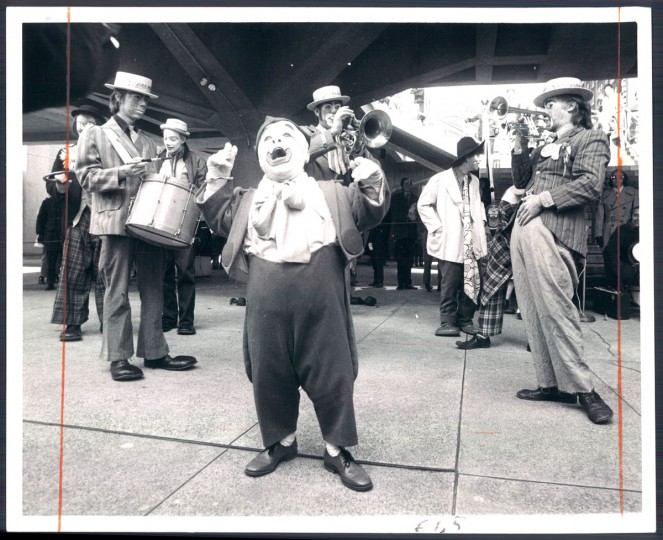 Performers with the Ringling Brothers circus in 1972. (Baltimore Sun) 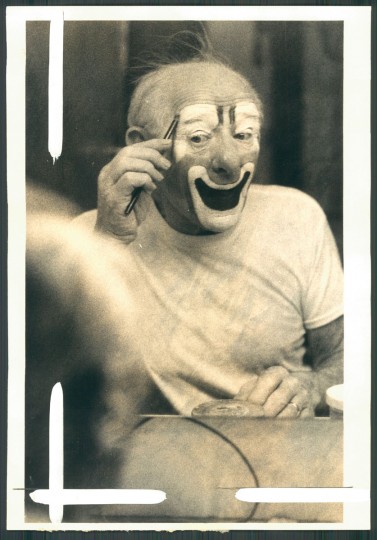 1977: THE ROAR OF THE GREASEPAINT With the smell of the crowd waiting out front, Lou Jacobs, the veteran of the Ringling Brothers clown troupe prepares for another opening another show at the Civic Center last night. (Baltimore Sun)

Circus performances date back to Rome; but Ringling Brothers circus made its first stop in Baltimore around the turn of the last century. “Most Resplendent Free Parade ever witnessed upon the streets of Baltimore,” read an ad that ran in The Sun on April 23, 1898. “See the Parade and then decide whether or not to see the Show.” Certainly, the circus organizers must have imagined, few could watch the wonder of 25 pachyderms trudging through town and resist shelling out fifty cents to see the full show. That year, the exhibition grounds were at Old Union Park on York Road, though in other years it was at Edmonson Avenue, Greenmount Avenue, or Pimlico race track.

The pre-circus parade through the streets of Baltimore became an annual tradition into this century. (In 1922, it was a rallying point for a Sun editor leading an initiative to bring an elephant to Baltimore’s zoo.) But not everyone enjoyed the spectacle of animals roaming through the streets of Baltimore. In 1902 a horse pulling a US mail wagon got spooked by the sight of the elephants and ran into a crowd of bystanders, knocking over four men.

The Sun dutifully covered the annual parade and the circus setup in Baltimore. “Tents, stables and sleeping quarters spring up as though by a touch of magic,” the paper reported in 1925. In 1937, the reporter assigned to the story instead simply ran the previous decade’s worth of stories from The Sun archives, with the explanation “At this season an event occurs which requires the same sort of newspaper coverage. It is the circus.” Perhaps the Great Depression dimmed his enthusiasm for such frivolities.

In 1962, retired circus employee Frank J. Mayer reminisced in The Sun about the “traveling town” of Ringling Bros. & Barnum & Bailey setting up at Pimlico in the 1930s. Ringling Bros. purchased Barnum & Bailey in 1907, creating “The Greatest Show on Earth” after years of feuding between the two circuses. In those years, he recalled, “We lived much like townspeople. We had our doctor, our postman, our store, our restaurant, even a few of our own little social clubs.” Baltimore was not regarded as a good circus town among the workers, since it was a racehorse town, “and where there are horse races there is never much spare money left over for circuses.”

Racehorse town or no, that apparently did little to keep the circus from coming back year after year.

Performers, equipment and animals had arrived via train. While circus cooks prepared food for thousands of employees, workers raised the canvas for the sideshow tent, while chanting “Rock, muss, buss, shape, break, run along!” according to an article in The Sun from 1956.

At the circus, pink lemonade was the beverage of choice, peanuts and popcorn and ice cream cones were the treats. “And day laborer and millionaire with their kiddies jostled one another and stood side by side in the democracy of the big show,” The Sun reported in 1914. That year saw 700 horses as well as camels and elephants partake in a performance of “The Wizard Prince of Arabia,” followed by a dizzying array of acts that left spectators wishing “he possessed for the time six pairs of eyes and half a dozen sets of brains in order to be able to take it all in.”

Modifications and upgrades were made each year to entice new patrons. In 1928, The Sun reported an exciting new act: an elephant trainer thrust his head in the mouth of a pachyderm, who then lifted him up in his mouth, his feet in the air. In 1939, Sun reporter Avery McBee wrote of a new and improved “Greatest Show on Earth.” Costumes were designed by famous designer LeMaire, and the big top was now equipped with an early form of air conditioning that supposedly used 60 tons of ice in the span of 3 hours to cool circus spectators. Ringing Bros. & Barnum & Bailey had gone modern.

In 1956, Ringling announced it was “quitting the road.” To cut costs from transporting the canvas across the country, the circus would only perform in closed arenas.

Still, the circus returned to Baltimore the following year; this time to Memorial Stadium. It later moved to the Civic Center.

In March 1979, a 37 year-old aerialist named Evelyn Takacs was performing a trick with her husband when she fell 20 feet to the ground, her fall broken only by a thin rubber mat on the concrete floor of the Civic Center. Takacs, who spoke no English, was taken to University Hospital with back and arm injuries while clowns were called in on stage for an emergency performance to distract the audience in the half-filled arena. The show must go on.

Takac’s fall might have been a reminder of the dangers performers faced — a fact lost on later, more jaded audiences. According to an article that ran in 1993, the circus’s one-time owner Irvin Feld, a man born in Hagerstown and credited with saving the circus after it left the big top, complained that modern kids “raised in the glare of TV screens seemed to have a hard time believing that the dangers in the acts of wire walkers, sway-pole riders and tiger tamers were sit-on-the-edge-of-the-seat real.” There was a trick, they thought.

This week, the final nail in the coffin. The circus told The Associated Press they’ll close forever in May. Its stop at Baltimore’s Royal Farms Arena April 20-30 will be one of the last in history. The end of an era.