From the vault: A ghost tour of the Admiral Fell Inn, formerly the Anchorage

The Admiral Fell Inn in Fells Point is haunted. But not like, The Shining haunted, insists the hotel’s general manager Mario Corrado Jr. 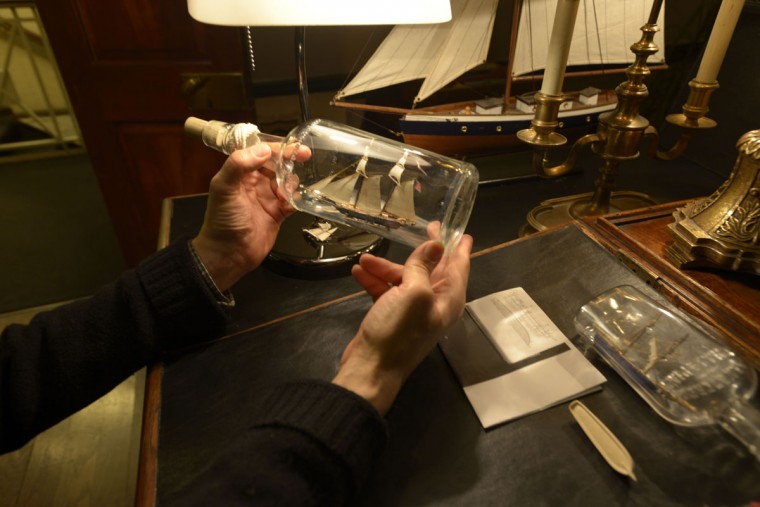 In addition to working as a guide at the hotel, historian Steven Foote makes model ships in bottles, a nod to Fells Point’s history as a shipbuilding center. (Christina Tkacik/Baltimore Sun) 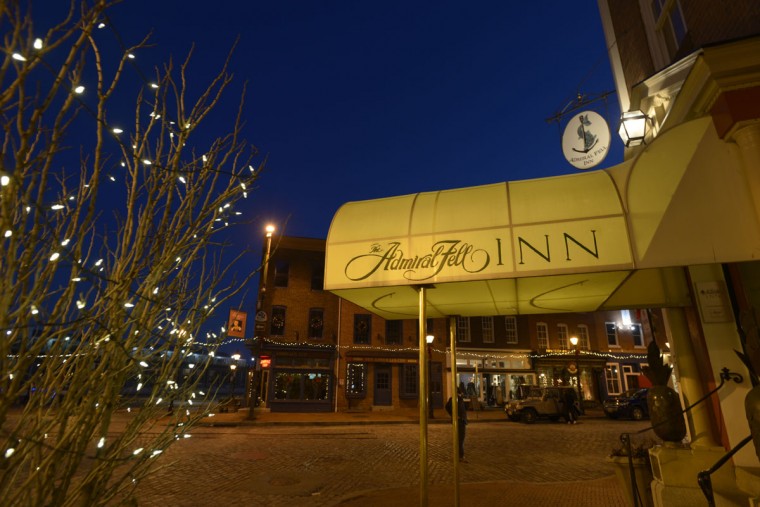 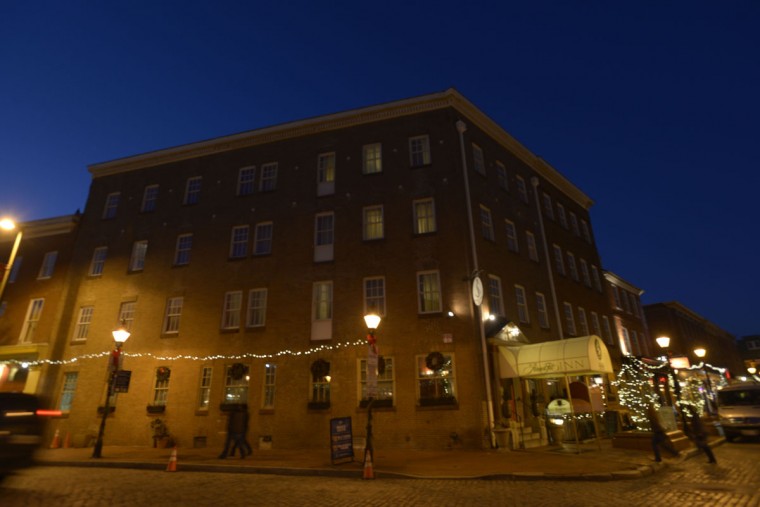 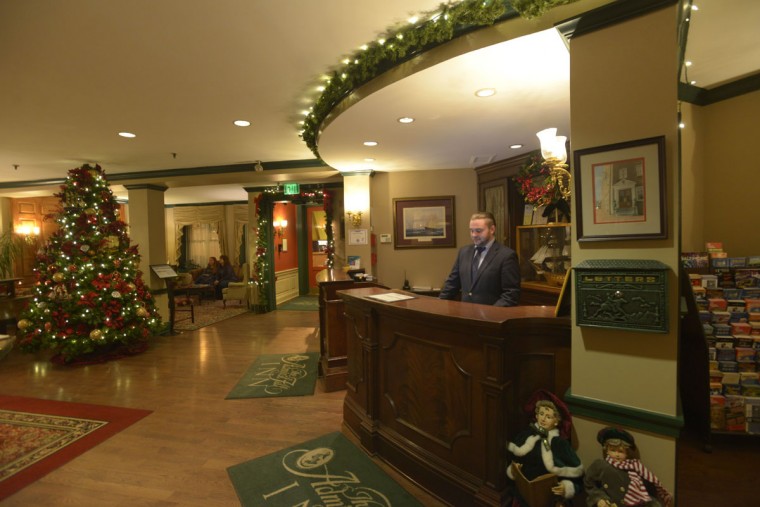 The lobby in the Admiral Fell, formerly known as the Anchorage. The front desk sometimes fields calls from guests who report parties happening in the room nextdoor — parties that mysteriously go silent once the phonecall is placed. (Christina Tkacik/Baltimore Sun) 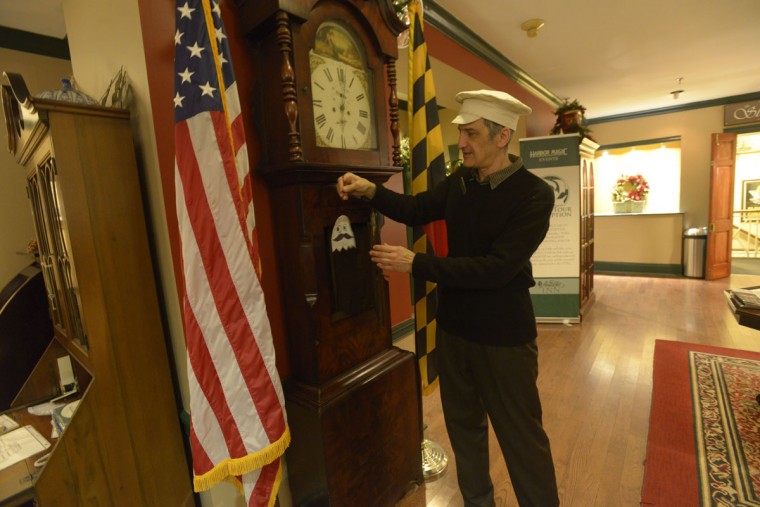 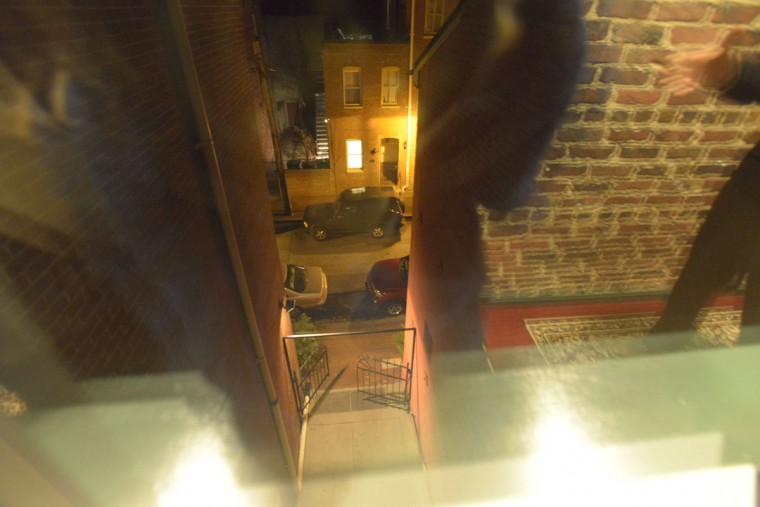 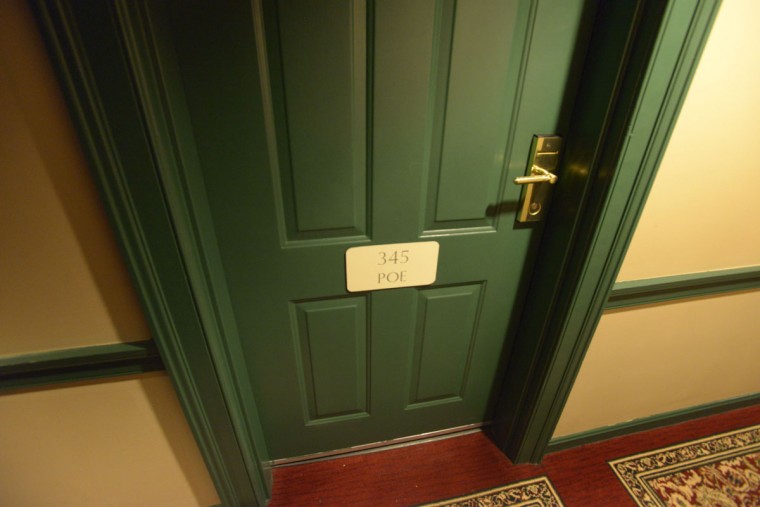 The rooms at the Admiral Fell bear the names of prominent Baltimoreans such as Edgar Allan Poe. (Christina Tkacik/Baltimore Sun) 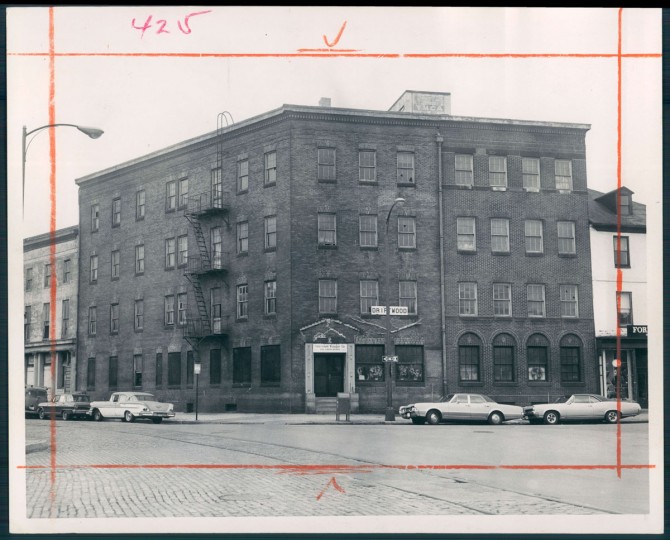 The site of the Anchorage Hotel in photo dated October 12, 1967. The hotel, once a destination for seamen staying in the Baltimore harbor, closed in 1955. (Baltimore Sun) 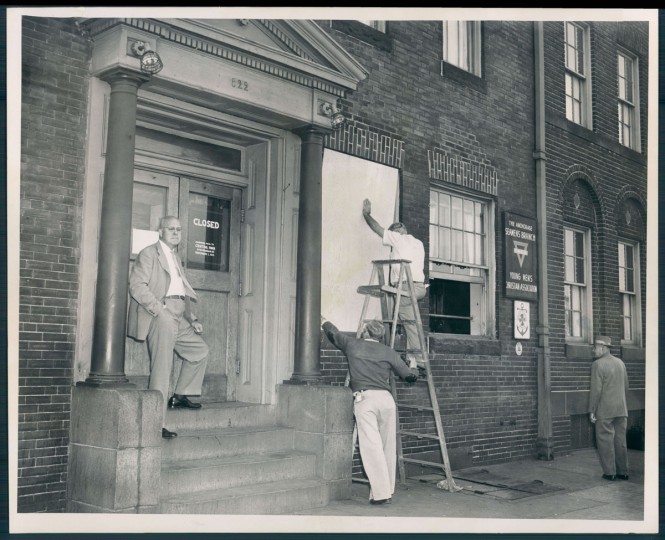 A photo of the Anchorage Hotel in the year that it closed, 1955. Helen Delich, then a Sun reporter, called its closing part of a “final curtain to a definite era in this port.” 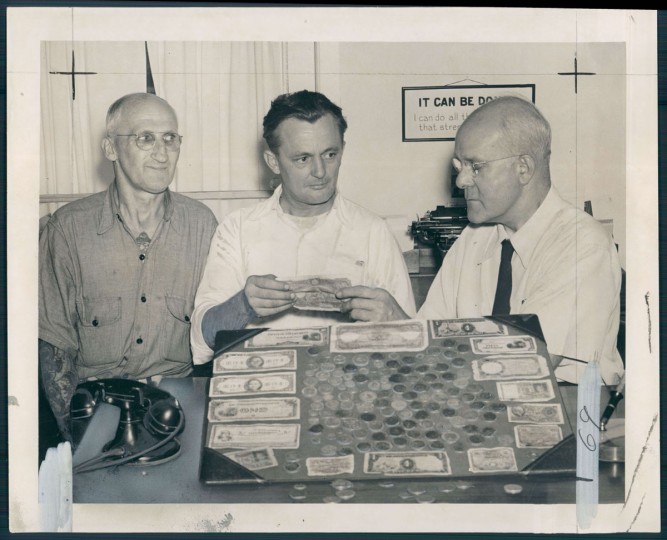 The Anchorage Hotel was a refuge in Fells Point for sailors from around the world. Photo dated 1949. (Baltimore Sun) 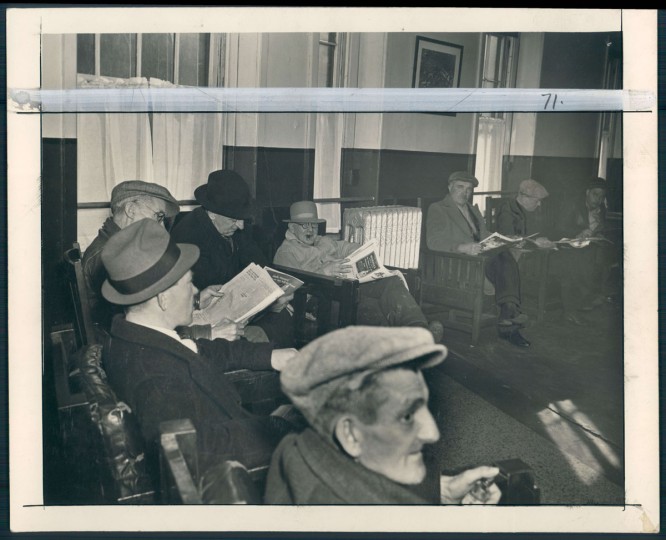 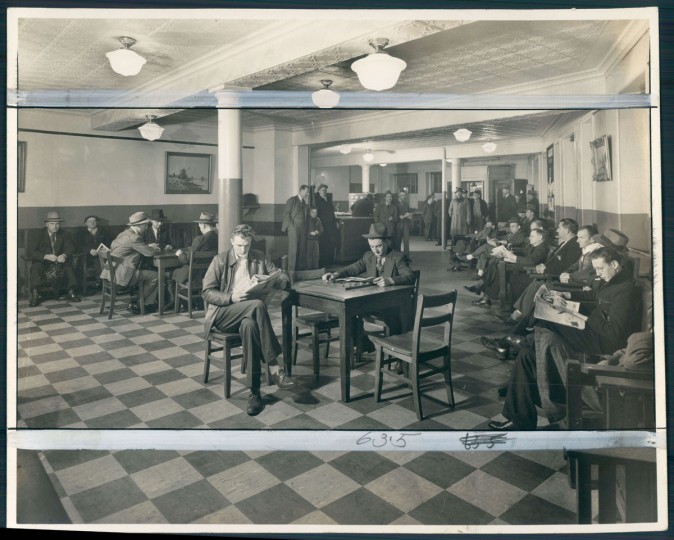 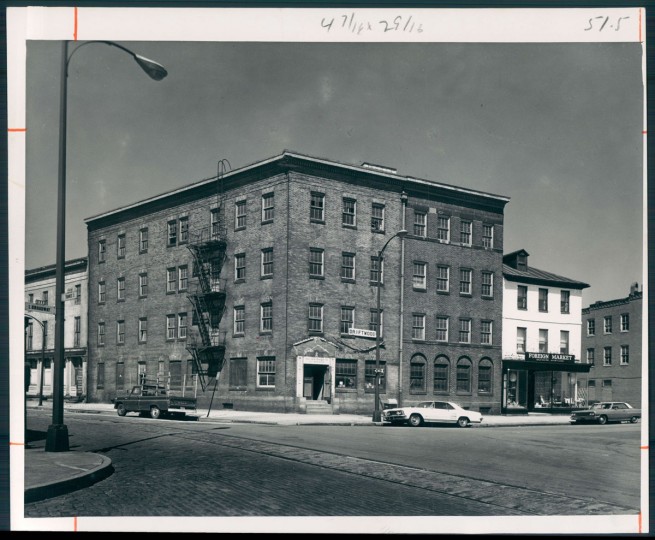 Dozens of sailors died at the Anchorage over the years. Today at the Admiral Fell Inn, guests sometimes report ghost sightings and other supernatural occurrences. (Baltimore Sun) 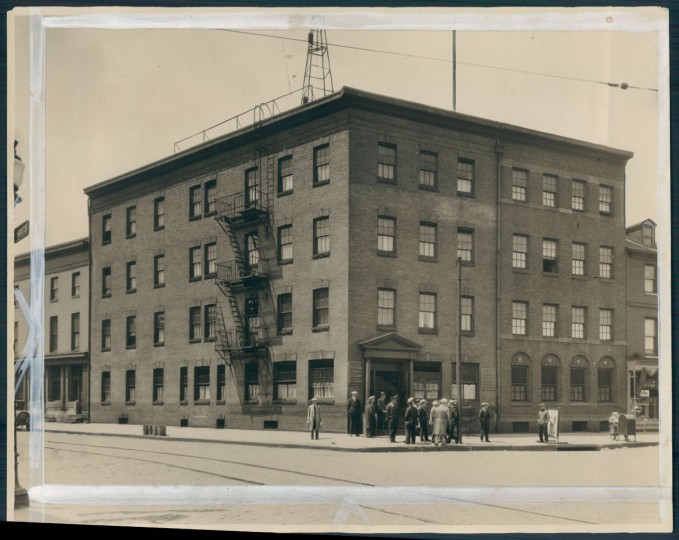 The Anchorage Hotel was a refuge in Fells Point for sailors from around the world. Photo dated 1929, the year the YMCA took over the hotel. (Baltimore Sun) 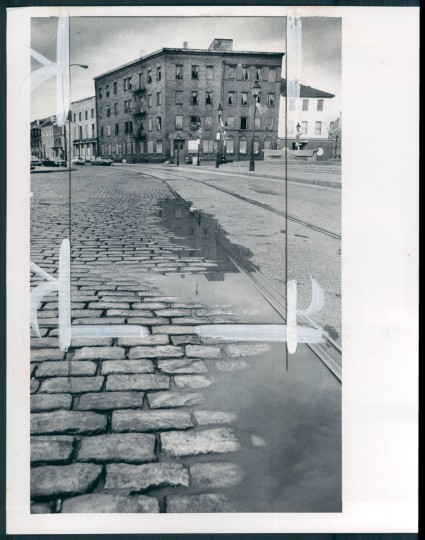 In the 1980s, the Anchorage reopened as the Admiral Fell Inn. The current building combines around seven different properties, extending as far as the Horse You Came on Saloon. Where the rooms were once 35 cents per night, they can now cost around $200. (Baltimore Sun)

“We’re not the Stanley,” he says, referring to the hotel in Colorado that inspired Stephen King’s famous novel.

The ghosts at the Admiral Fell Inn are not mean. Guests sometimes call the front desk late at night to complain that there’s a party is happening in the room next door.

Without fail, the clerk at the front desk will find that there is no one checked in to the room next door.

Then, again without fail: the noise stops.

Ghosts don’t like being found out, says Steven Foote, who leads a nightly ghost tour at the hotel.

At the Admiral Fell Inn, ghosts are a means of uniting with the past. The nightly ghost tour combines tales of spooky encounters with a history of the neighborhood.

“I see myself as one of the custodians of the mysteries and secrets of Fells Point,” Foote says.

Gathered for the tour on a recent evening were two women who’d heard about it after tasting the hotel’s winning eggnog at a nearby eggnog contest. Another couple wandered in from the hotel’s downstairs bar, drinks in hand. The bartender (and maker of the winning eggnog) had let them know the tour was about to begin.

Foote, lanky and dressed in an apron and historic sailor’s cap, introduced the tourists to Edward Fell, whose portrait hangs in the lobby. Fell was the wealthy landowner who founded the town of Fells Point. In the 1800s Fells Point became a destination for shipbuilding and for sailors and vice that came with it. Seamen from around the world came ashore to throngs of bars, brothels and overpriced boarding houses that would quickly separate them from their wages.

“It was an unholy place, a pit,” said Foote.

Hoping to ameliorate this disgrace, the Christian Port Mission opened a hotel in the late 19th century where sailors could get a decent room at a decent price. It was called the Anchorage. Mass was held on Sundays for those interested in attending. Neighbors baked cookies for the seamen on holidays. In the 1920s, the inn was taken over by the Young Men’s Christian Association.

Thousands of sailors passed through the Anchorage through the decades. Naturally, some of them got sick. They might even die. “I mean, check out, permanently,” Foote said. If their families couldn’t be contacted — perhaps they were from a distant land, like Japan or Germany — the sailor might be buried at a nearby plot. The Sun reported that a German sailor once shot himself in the hotel, terrified of going blind from a disease he had contracted in North Africa.

Their presence lingers on.

Foote tells of a guest who came to the Admiral Fell Inn and woke up in his hotel bed to the sound of footsteps. He saw a woman in old fashioned clothing walk through the wall. She urged the guest to lie back down, before she moved on to check on the person in the next bed. She disappeared just as quickly.

The Anchorage closed in 1955. More men were sleeping on board their ships. The “Y,” wanted to focus their energies elsewhere. Helen Delich, then a reporter here, covered it for The Sun, calling its closure, along with the retirement of its executive secretary, the “final curtain to a definite era in this port.”

In the 1980s, the Anchorage reopened as the Admiral Fell Inn. Today, it’s an inviting boutique hotel on the corner of Thames and S. Broadway. Where the rooms were once 35 cents per night, they can now cost around $200. The current building combines around seven different properties, artfully stitched together through careful renovation. There’s a maze-like feel as guests wander through the hallways, past doors named for prominent Baltimoreans like Edgar Allan Poe and H.L. Mencken.

Despite their jokes, they believe. Their own house in Calvert County is haunted, they say, by Kelly’s grandfather.