Excerpt from an article published on January 8, 1996

One of the biggest winter storms of the century slammed into Maryland yesterday, paralyzing the state with a blinding mix of fast-falling snow and ferocious winds that could turn this morning’s commute into a slow, agonizing crawl.

If there’s a commute at all.

Motorists were expected to face nearly 2 feet of powdery snow. Forecasters say the snow, driven by winds with gusts topping 30 mph, will make it tough — if not impossible — for plows to keep major highways clear before the first commuters venture out around dawn. 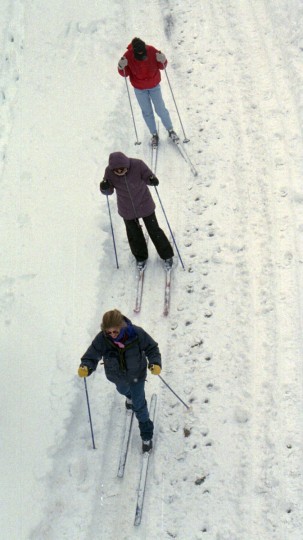 Skiing down Light St. next to the Light St. Pavilion are front to back: Priscilla Henderer, Helen Holden and Susan Holden, all from Federal Hill. (Algerina Perna/Baltimore Sun) 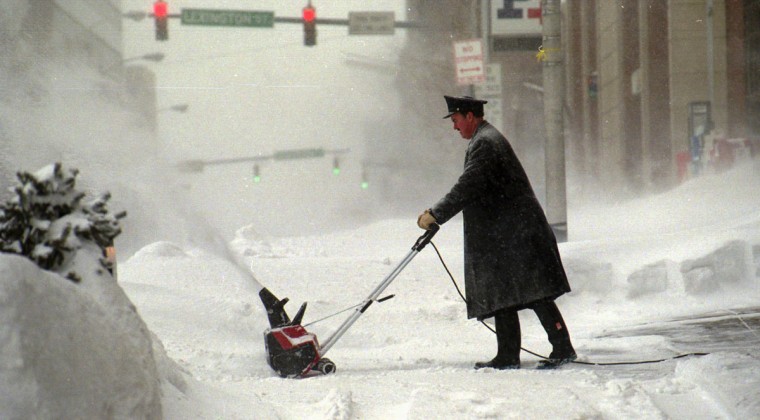 Don Hamilton, the Doorman at the Tremont Plaza Hotel on St. Paul St., clears the sidewalk with a snow blower. (Algerina Perna/Baltimore Sun) 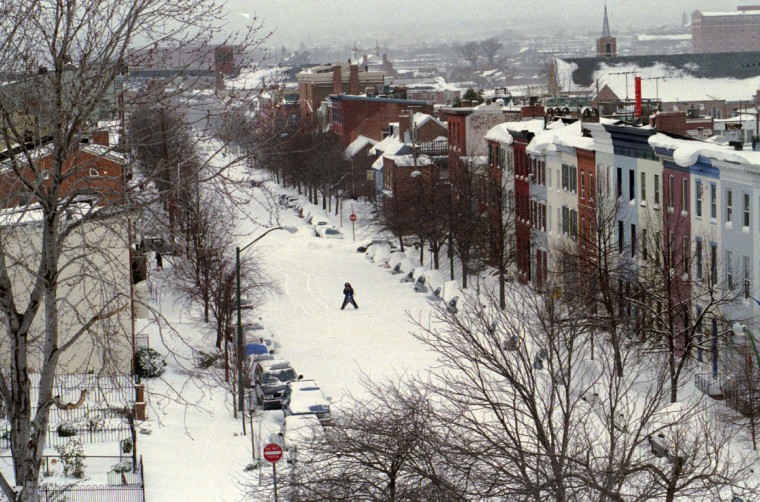 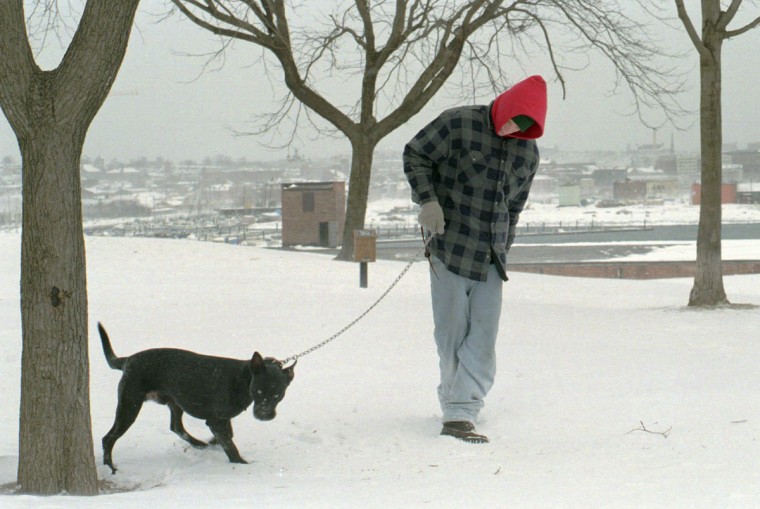 Patrick Frazier walks his dog, “Buster”, in Federal Hill. He lives across the street from the park. (Algerina Perna/Baltimore Sun) 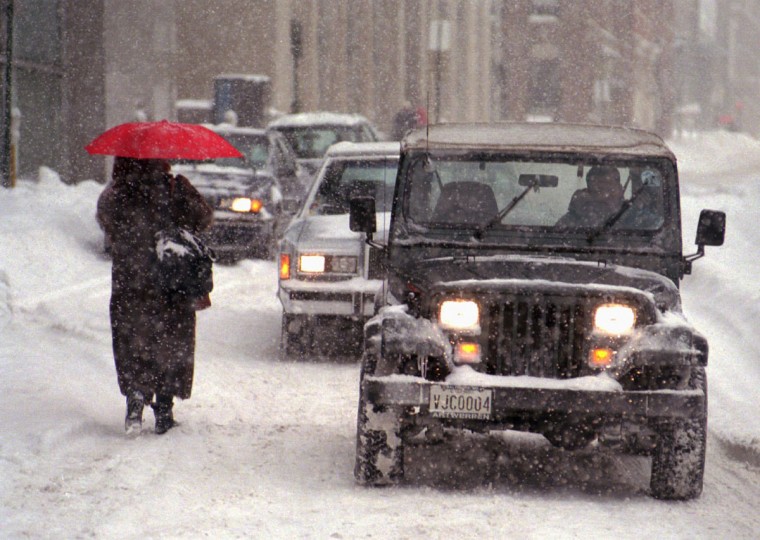 Melanie Alfano, Baltimore, makes her way towards her car through the traffic at St. Paul Place. (Algerina Perna/Baltimore Sun) 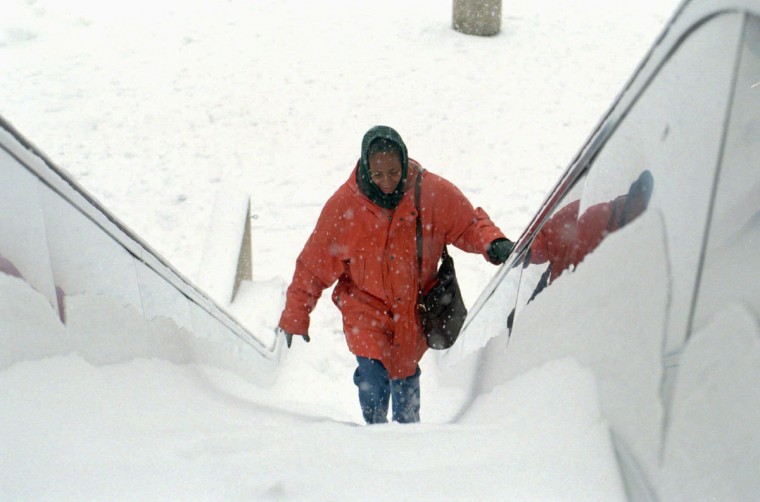 Barbara Edwards walks up a snow-covered escalator to her credit union at 1 East Pratt St., only to find that they had closed early due to today’s snowfall. She drove all the way from Belcamp in Harford Co. (Algerina Perna/Baltimore Sun) 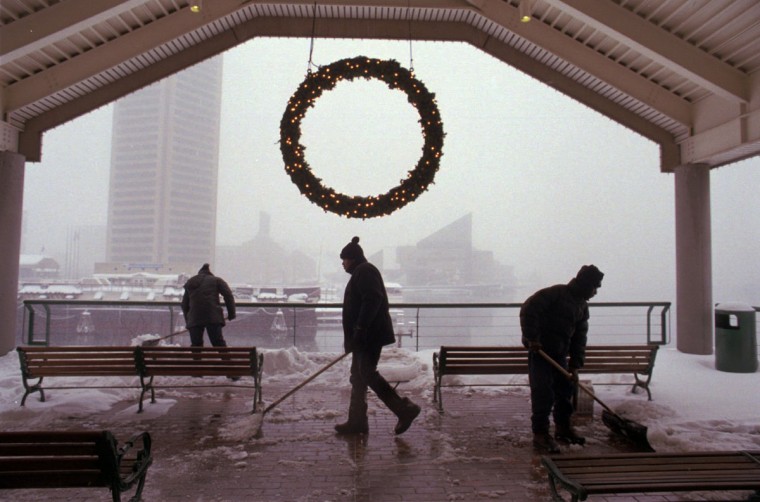 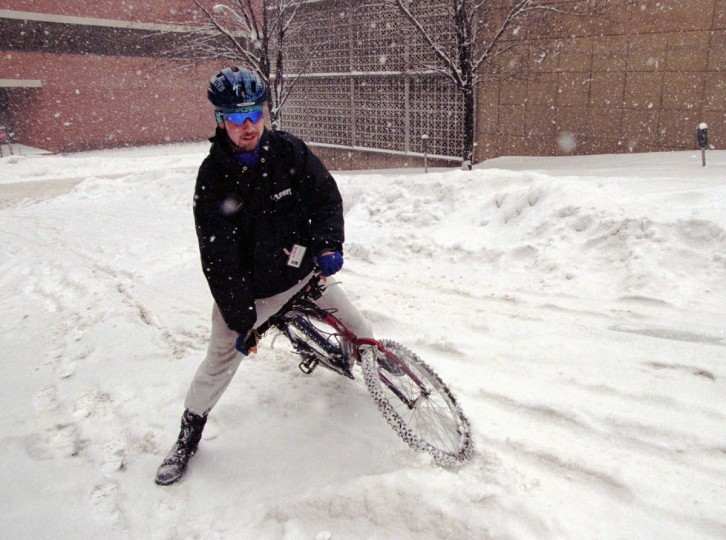 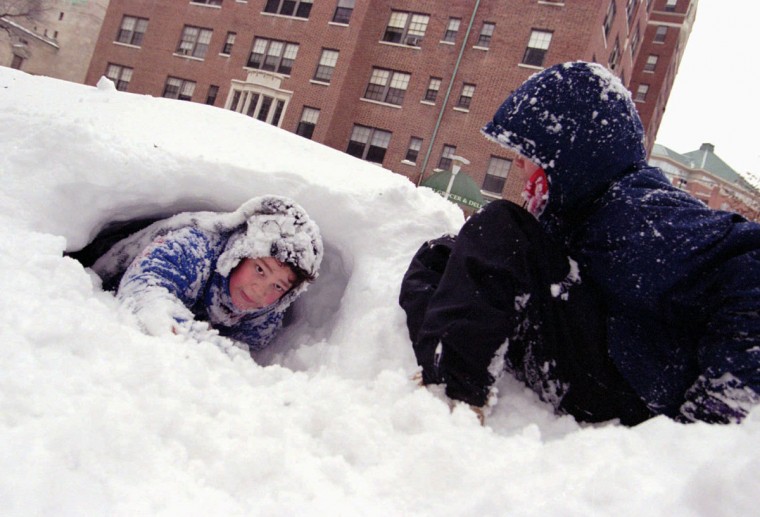 Carter Erwin, 10, left, and his 13-year-old brother Benson have dug at least eight tunnels, since Sunday, in the three feet of snow around their home at W. 39th street and Canterbury Road. (Kenneth K. Lam/Baltimore Sun) 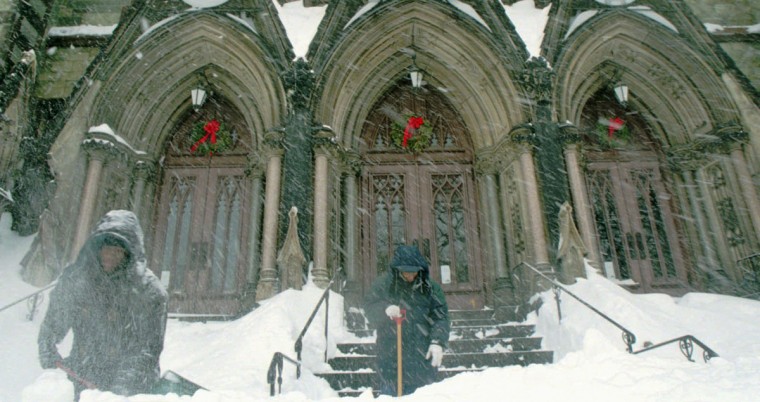 Daniel Jones (left) and John Moore are trying to keep the church clear for anyone who feels the need to worship during the storm. This is Mount Vernon Place United Methodist Church. (Hillery Smith/Baltimore Sun) 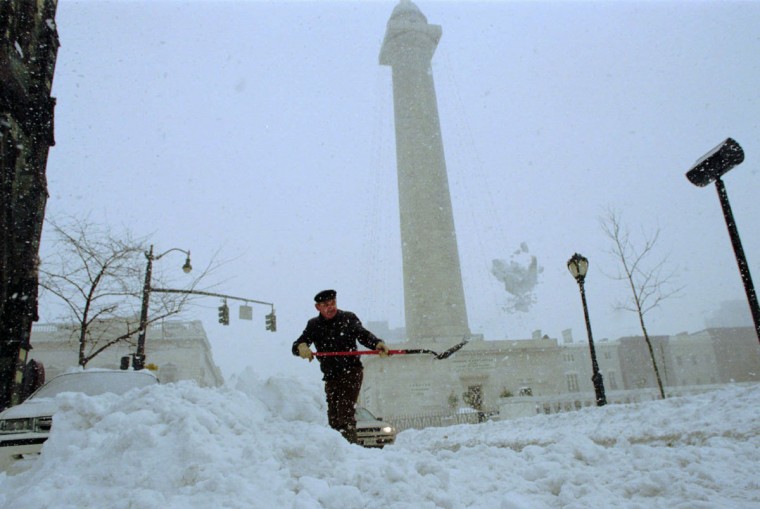 Julius Zulver has a very solemn need for his car. He shovels because his wife died yesterday and he needs to get to the funeral home. (Hillery Smith/Baltimore Sun) 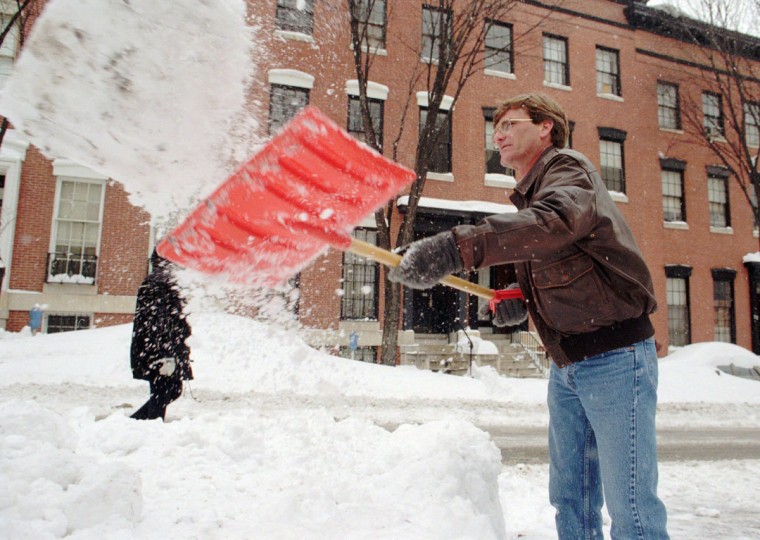 Michael Gosselin shovels out a space for himself at work. He works for Enhansco. (Hillery Smith/Baltimore Sun) 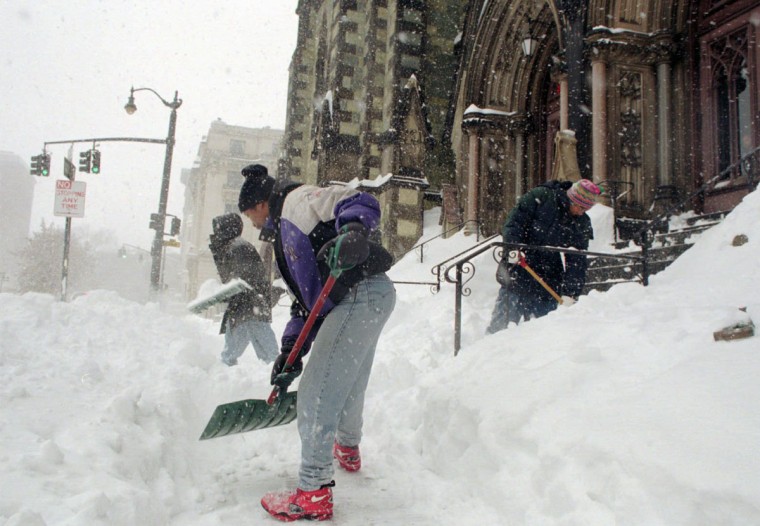 Ron Corbin (front) is the Custodian for the Mount Vernon Place United Methodist Church. He and Daniel Jones (left) and John Moore Right are trying to keep the church clear for anyone who feels the need to worship during the store. (Hillery Smith/Baltimore Sun) 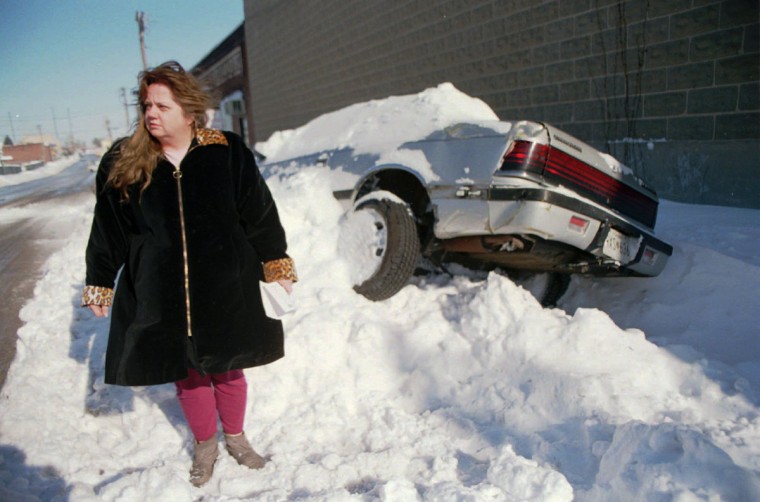 Drema Anderson’s 1988 Chrysler LeBaron was hit by a snowplow on the 100 block of N. Haven St. (Jed Kirschbaum/Baltimore Sun) 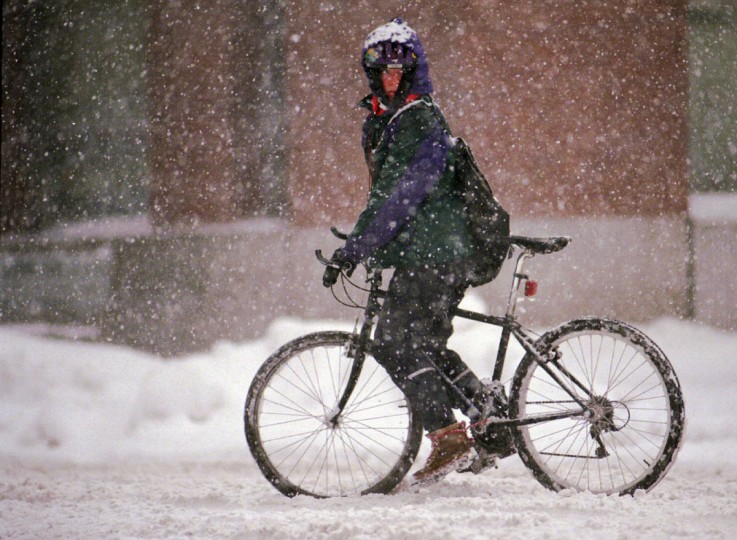 Jessica Grimes, a messenger for VMW Express, pedals on Baltimore St. despite the morning snowstorm. When asked why she would cycle in weather like this, she replied, “I have to make money.” (Amy Davis/Baltimore Sun) 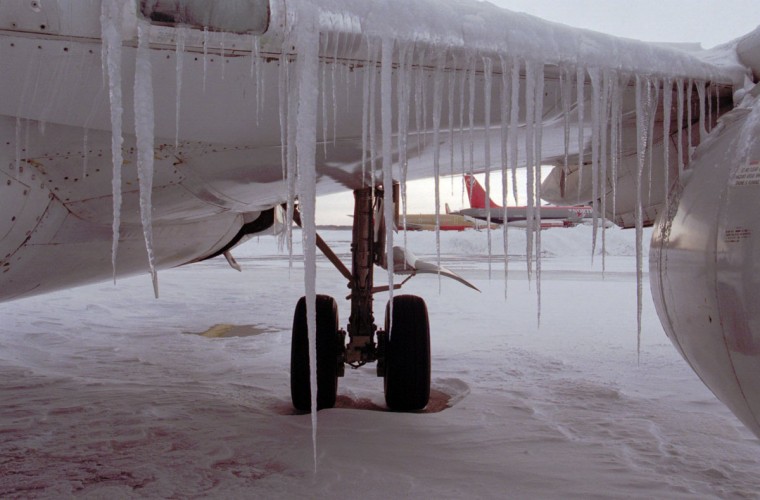 Icicles dangle from the left wing of a USAir passenger jet from melting snow that refreezes at the gate of Baltimore Washington International Airport Mon., Jan. 8, 1996. BWI Airport remained closed for another day as crews struggled to keep blowing snow from accumulating on the runways. (Baltimore Sun/Karl Merton Ferron) 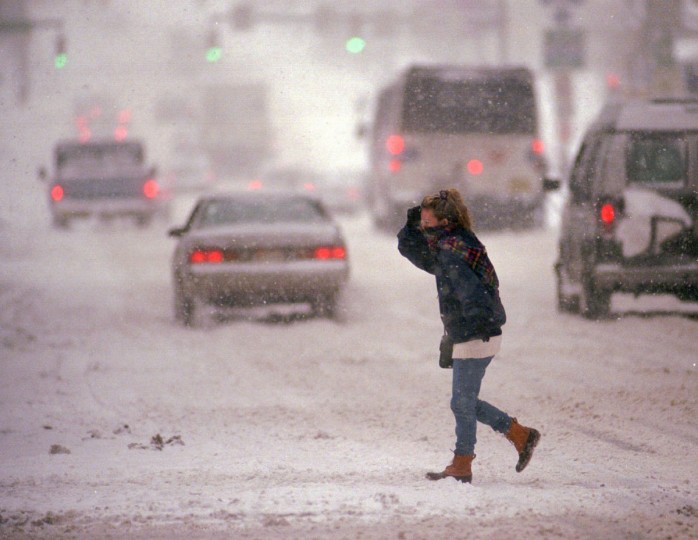 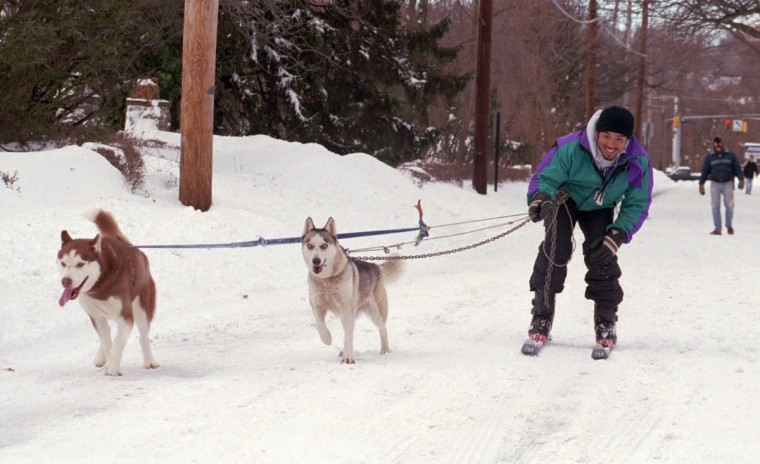 Darryl Burnett, of Baltimore, enjoys a day of skiing with the help from his two Siberian huskies named Dallas, left, and Chedai. (Kenneth K. Lam/Baltimore Sun) 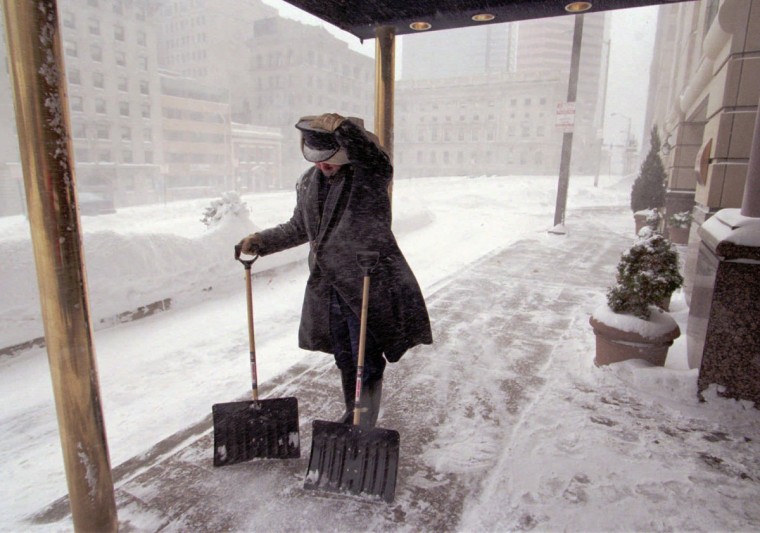 Don Hamilton, of Baltimore, a doorman at The Tremont Plaza Hotel, covers his head during a gust of wind that sent snow flying. (Kenneth K. Lam/Baltimore Sun) 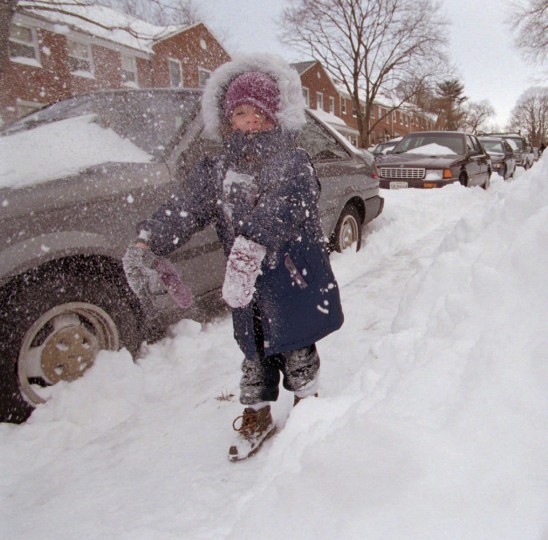 Three-year-old Kaylee Lantini enjoys her first snow storm as she throws snow balls at her parent near their home on Briarwood Road in Catonsville. (Kenneth K. Lam/Baltimore Sun) 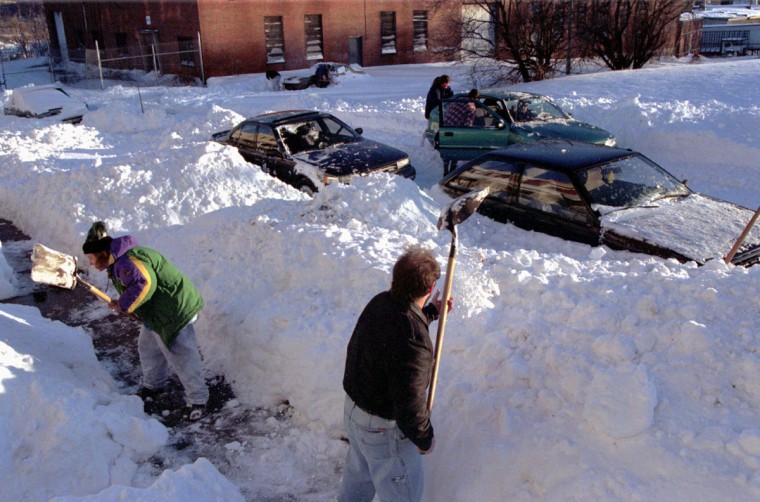 Residents along Indiana St in the Westport section of southern Baltimore shovel snow from around cars and in front of homes this afternoon Jan. 8, 1996. The neighborhood effort helped get all the cars free from being pinned by the snowdrifts. (Baltimore Sun/Karl Merton Ferron) 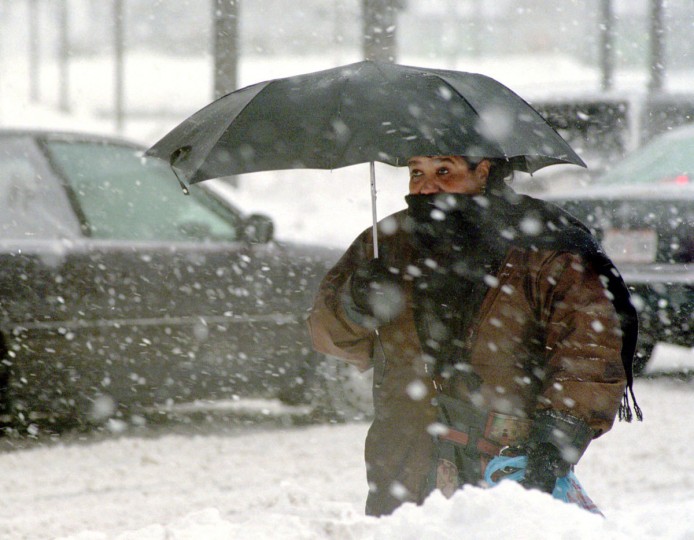 Beverly Mills of Baltimore, waiting for a bus so she can get to work at the Baltimore Detention Center. She is waiting on Light Street, in downtown Baltimore. (Lloyd Fox/Baltimore Sun) 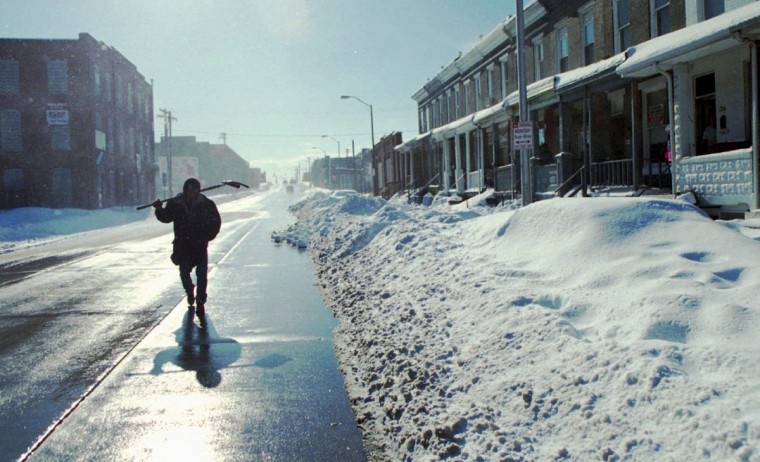 Scenes from the Blizzard of 1996. ( Jed Kirschbaum/Baltimore Sun) 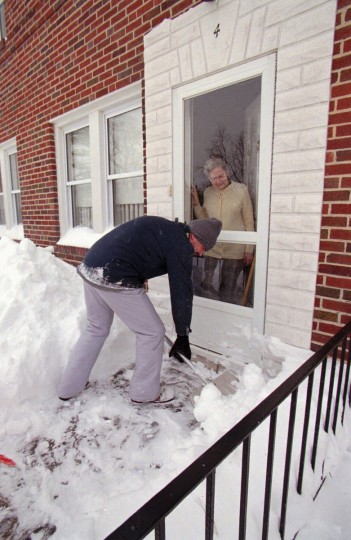 Mark Kaler, left, shuffles snow from the front door and sidewalk of Doris LaPaglia, who is over 70 years old, who lives at 4 Briarwood Road. Kaler has shuffled LaPaglia’s sidewalk four times since Saturday. Kaler and his wife, Paulette, has shuffled their own sidewalk plus three other neighbors’. (Kenneth K. Lam/Baltimore Sun)

“Somebody’s got to do it,” says aircraft fueler Kevin Herrin of Glen Burnie, with Henson Services trudges through a snow drift with a hose to fuel the APU (auxiliary power unit) a Northwest Airlines jet that sits out the second day of BWI’s closure Monday, Jan. 8, 1996. The APU is run throughout cold temperatures when a jet is idle to keep the system warm. If a jet is completely shut down, lines could freeze. (Baltimore Sun/Karl Merton Ferron) 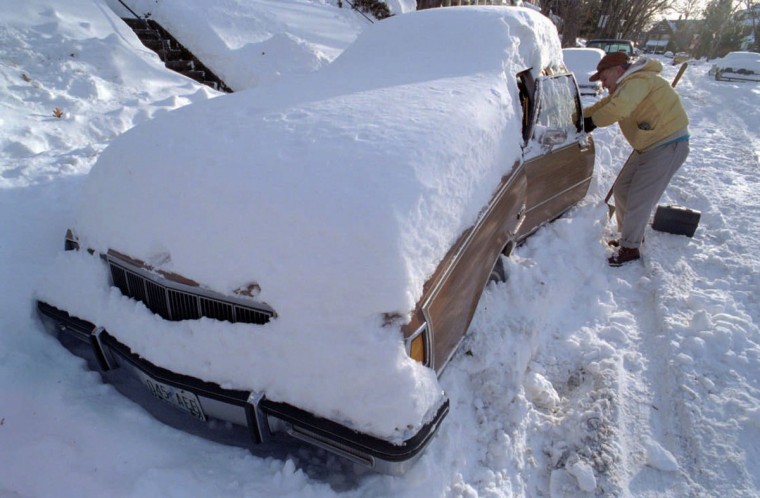 Frank Fico ventures out to his snow-covered station wagon to retrieve a few items. He was not planning to drive anytime soon. (Amy Davis/Baltimore Sun) 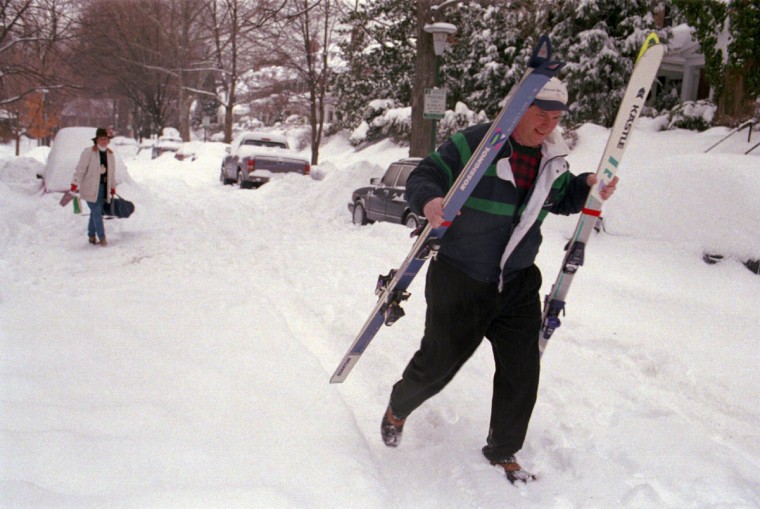 Jeff Harris, the only block resident with a 4 wheel drive vehicle, helped others during the week. By Friday, he was ready for more snow – packing skis, wife Ann (in back, left) and baby son in a 4×4 to visit relatives and do some skiing in PA. (Amy Davis/Baltimore Sun) 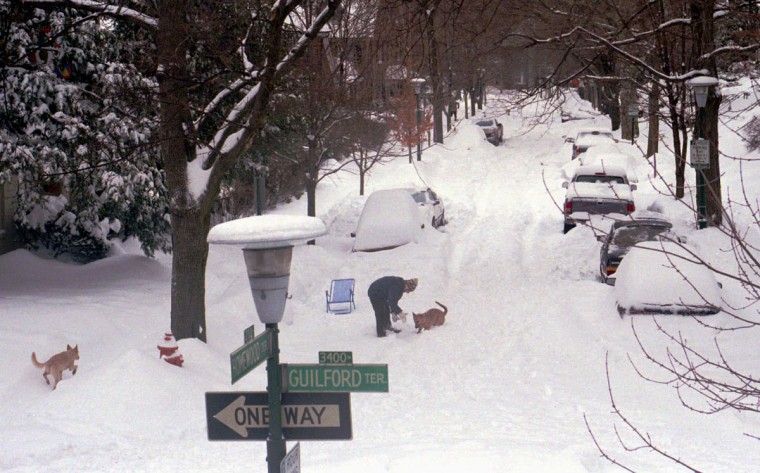 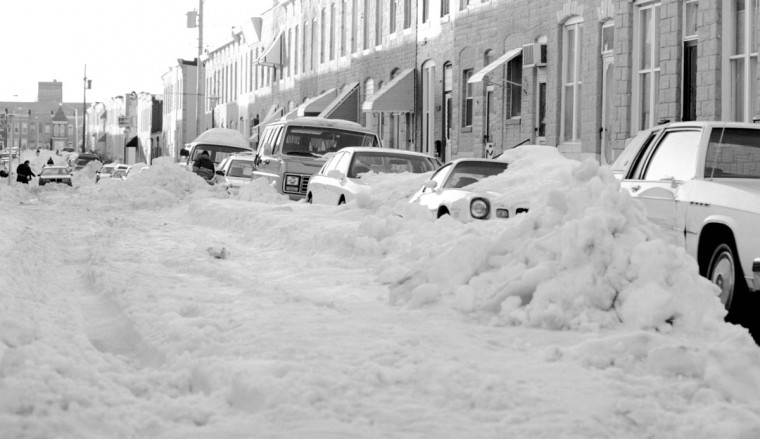 George Balog insists that 98% of the city roads are plowed. That may be so, but many of the roads are 1 lane and some in Highland Town still haven’t been touched. Shown is Mt. Pleasant Street off Pratt Street which still appears to have snow on it from Sunday’s blizzard. (Gene Sweeney Jr./Baltimore Sun) 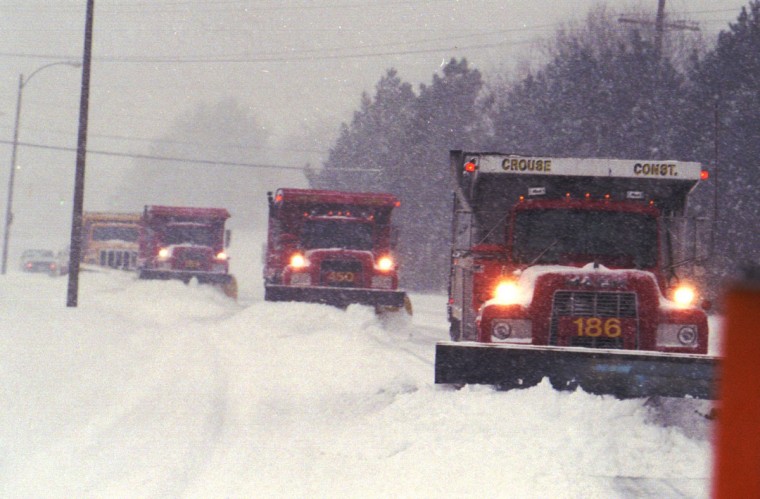 Trucks from the Baltimore County Snow Emergency Center plow roads in Towson during the Blizzard of ’96. (Algerina Penra/Baltimore Sun)

“The snow will return an hour after the plows leave,” said Richard Diener, a National Weather Service forecaster at Baltimore-Washington International Airport. “We have a massive, king-size gorilla on our hands.”

More snow is forecast to hit the region Thursday or Friday.

The Blizzard of 1996 struck states as far south as Kentucky and moved north to Philadelphia, Newark and New York. It closed Interstate 65 in Alabama, choked major highways on the East Coast with small mountains of drifting snow and stranded thousands of people caught in its wide, white path.

Forecasters say the blizzard dumped 2 inches of snow per hour on Baltimore yesterday, and it could wind up depositing about 18 inches by the time the system leaves Maryland today.