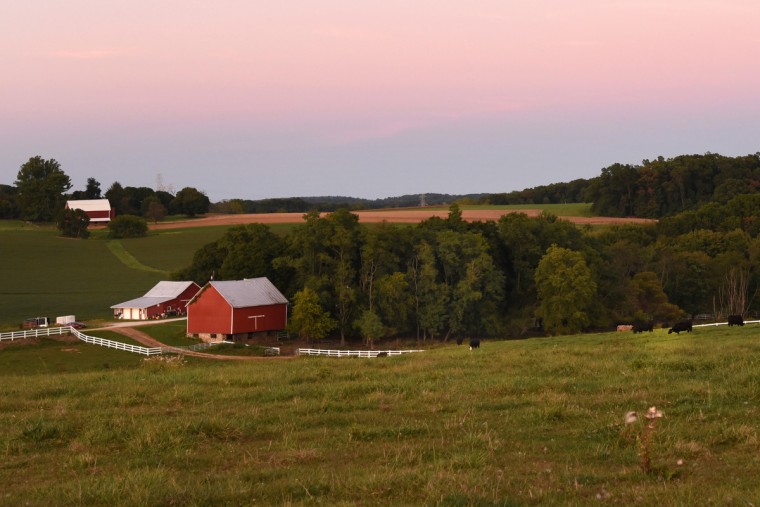 Rolling farmland can be seen on either side of Old York Road in the area once called Trump. It is now known as West Liberty, a neighborhood that is part of White Hall. In the far distance, about five miles to the north, is the Pennsylvania state line. (Amy Davis/Baltimore Sun) 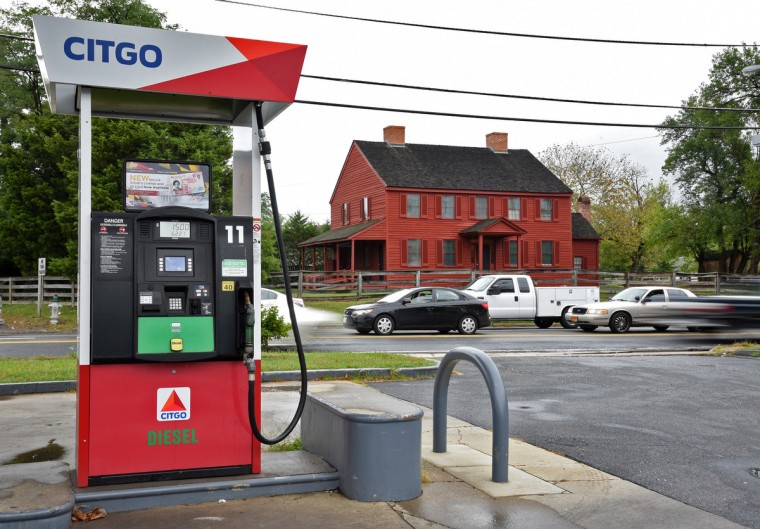 The Surratt House Museum, famous for the assistance its owner, Mary Surratt, gave to John Wilkes Booth after the assassination of Abraham Lincoln, sits serenely on Brandywine Road, surrounded by modern-day traffic and a gas station. When it was a tavern, hotel and post office, travelers relied on its livery stable and the nearby blacksmith shop. (Amy Davis/Baltimore Sun) 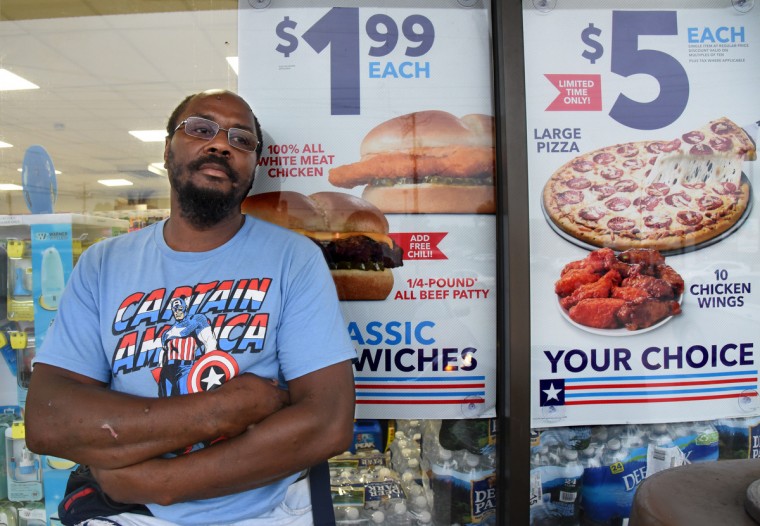 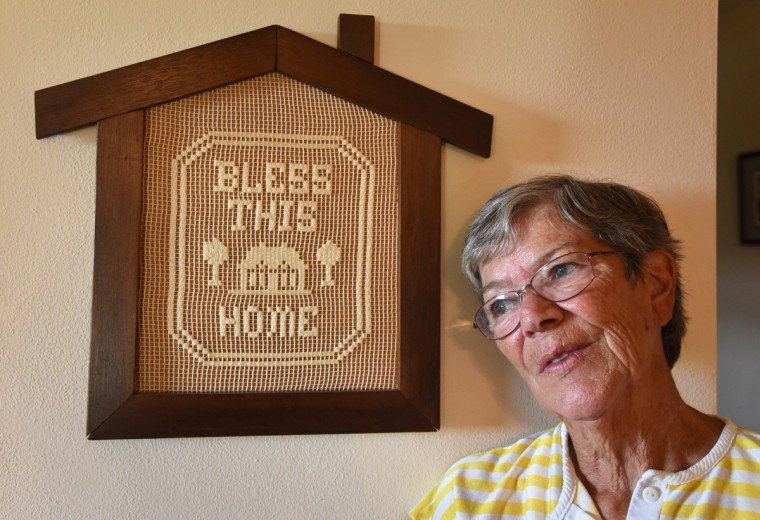 Fran Chenoweth, 73, of Parkton, used to operate a farm with her husband in the area once called Trump. Chenoweth was optimistic that Trump “will work with people, help people out, and maybe change some things. She was critical of the example set by Bill Clinton. (Amy Davis/Baltimore Sun) 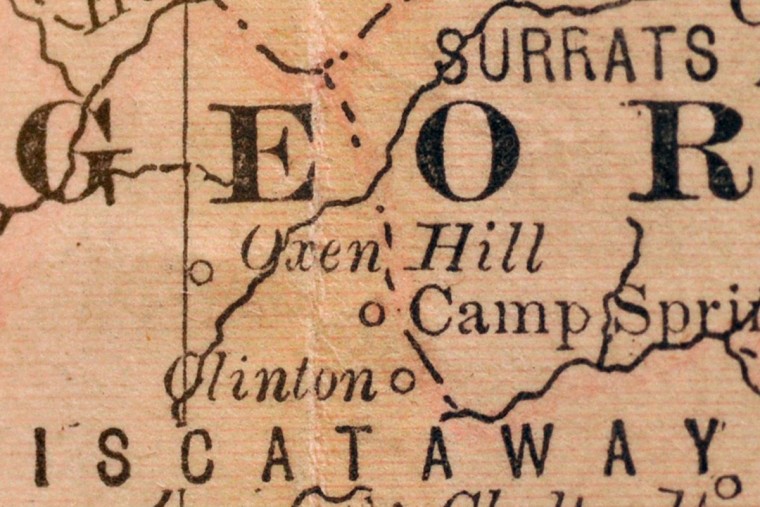 Detail of Clinton, in Prince George’s County, from an 1882 Rand, McNally & Company’s Atlas. Clinton is in the lower left corner, and its former name, Surrattsville, lives on in an area at the upper right of this detail, called Surrats. Courtesy of the Enoch Pratt Free LIbrary, Maryland’s State Library Resource Center. (Amy Davis/Baltimore Sun) 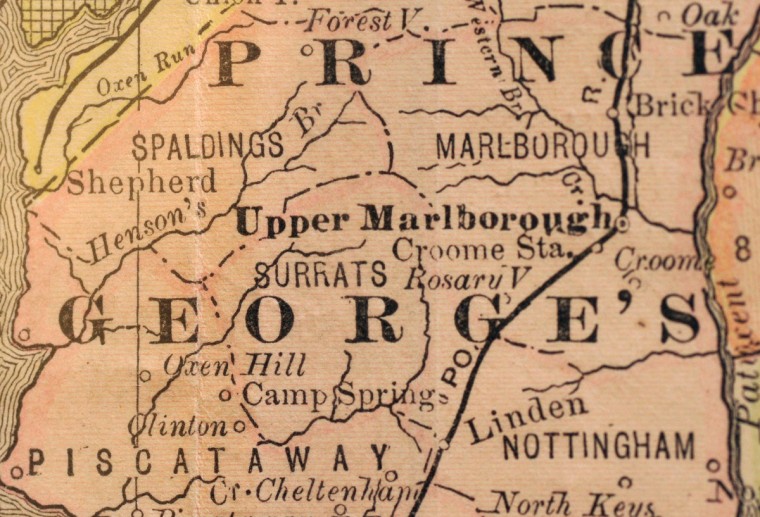 Detail of Clinton, in Prince George’s County, from an 1882 Rand, McNally & Company’s Atlas. Clinton is in the lower left corner, and its former name, Surrattsville, lives on in an area at the center of this detail, called Surrats. Courtesy of the Enoch Pratt Free LIbrary, Maryland’s State Library Resource Center. (Amy Davis/Baltimore Sun) 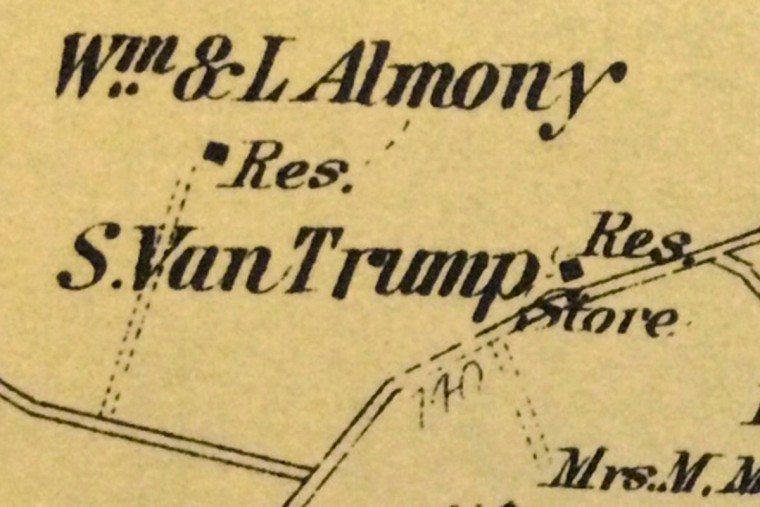 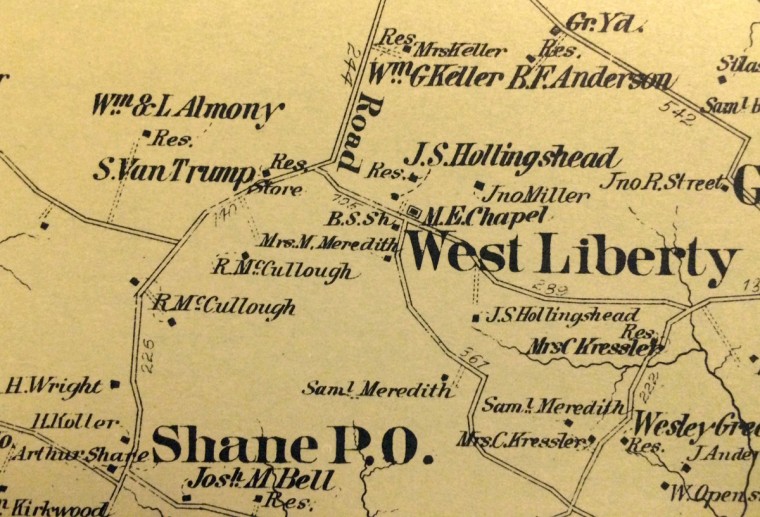 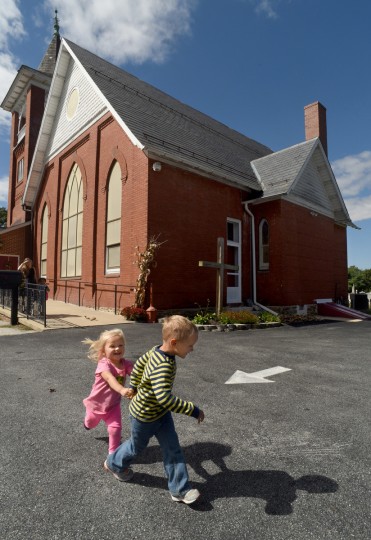 Branson Taylor, 4, with his sister Paislee, 2, run outside the West Liberty United Methodist Church, as they leave the daycare center at the church. The area once called Trump is now known as West Liberty, a neighborhood within the unincorporated community of White Hall in northern Baltimore County. (Amy Davis/Baltimore Sun) 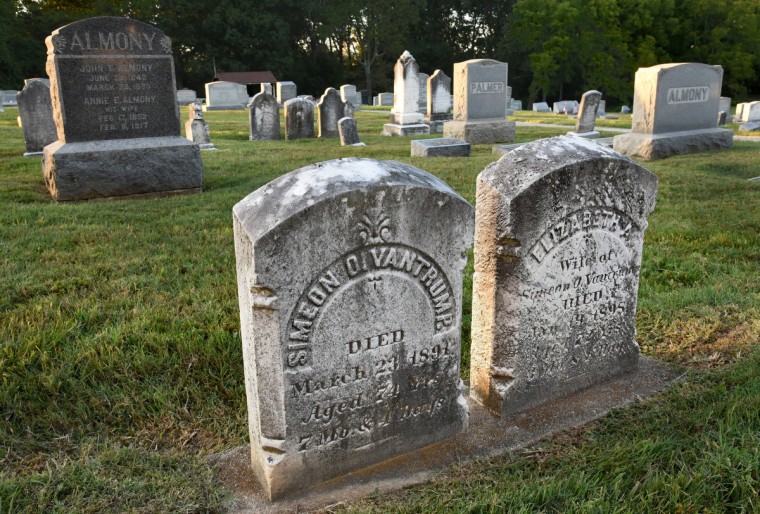 Simeon O. Van Trump, a 19th century settler who had a house and grocery store on Old York Road, just west of West Liberty Road, is buried with his wife Elizabeth at the cemetery for the Methodist Chapel now called West Liberty United Methodist Church. The crossroads area once called Trump is now known as West Liberty, a neighborhood within the unincorporated community of White Hall in northern Baltimore County. (Amy Davis/Baltimore Sun) 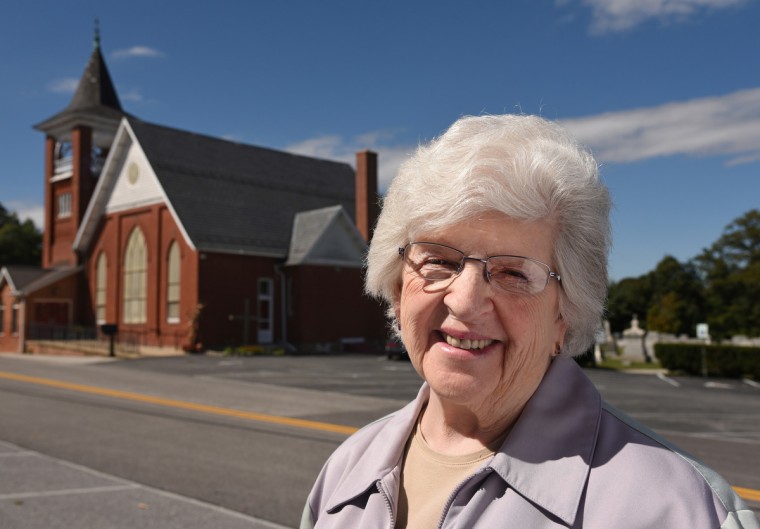 Janet Bushie, 76,has been active in the West Liberty United Methodist Church for more than fifty years. “I think our election is really important, Bushie said, adding that “I’m not really happy with either, to be truthful.” (Amy Davis/Baltimore Sun) 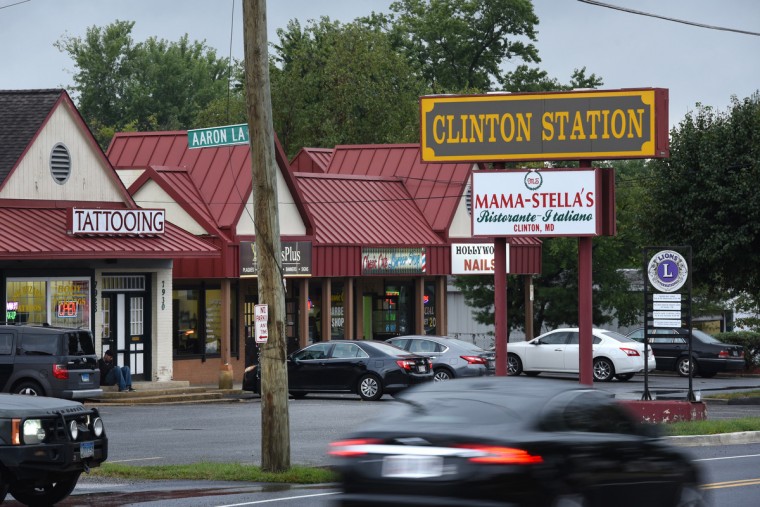 Traffic whizzes by the stores at Clinton Station on Old Branch Road, a heavily traveled route in this bedroom community for many workers who commute to Andrews Air Force Base or Washington, D.C. (Amy Davis/Baltimore Sun) 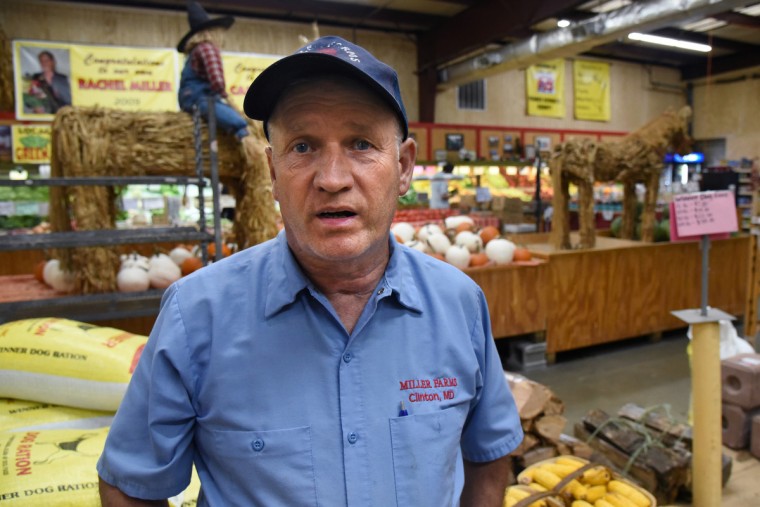 Ronnie Miller, 55, who runs Miller Farms with other family members, is the fifth generation to work at the farm, which dates back to 1840. Miller said it’s the last working farm in Prince George’s County. He was reluctant to express a preference in the presidential race, but observed that “If Trump gets in, it’s going to be different and if Clinton gets in, it’s going to be the same.” (Amy Davis/Baltimore Sun) 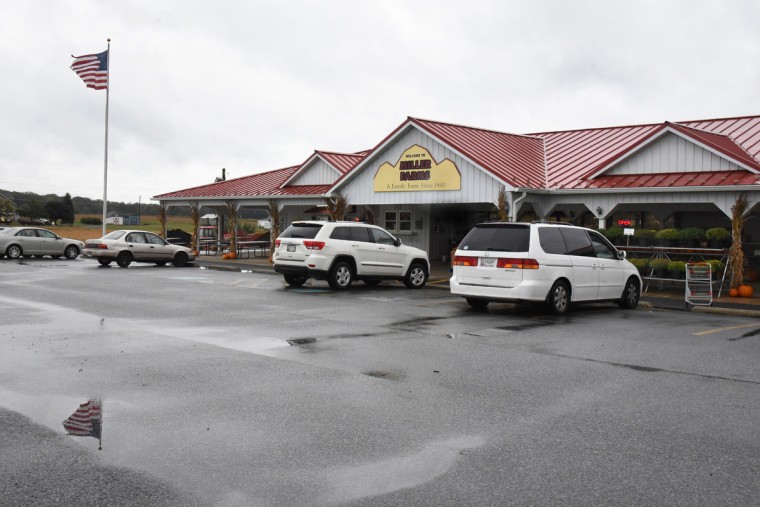 A flag is reflected in a puddle in front of the store for Miller Farms on Piscataway Road. Miller Farms, which dates back to 1840, calls itself the last active farm in Prince George’s County. (Amy Davis/Baltimore Sun) 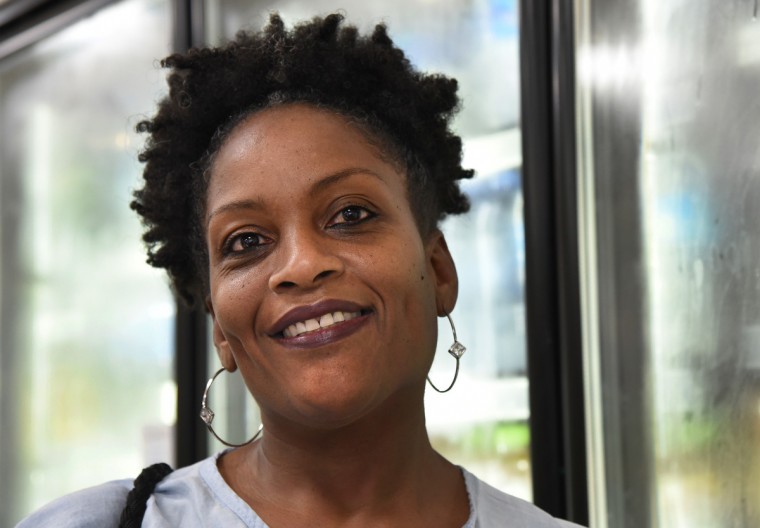 Sheila Jones, 51, who recently moved to Clinton, was attracted to the area by the affordable housing. About the election, Jones said: “Hillary to me, she’s worked hard to get to this point. I’m definitely going to support her.” She added, “We’ll be in trouble If Trump gets in the White House…to me, he’s a racist.” (Amy Davis/Baltimore Sun) 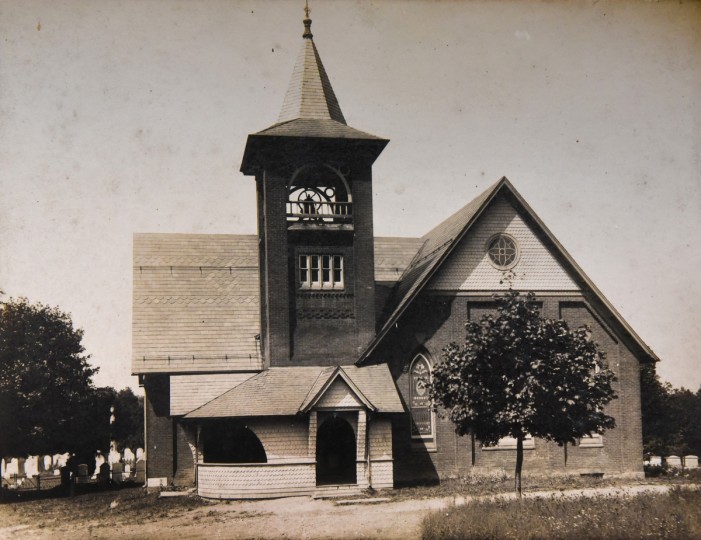 This undated early 20th c. photograph, on display at the West LIberty United Methodist Church, shows the building some time after it was built in 1898. It replaced the Meredith Meeting House of 1819. The earliest Methodist worshippers in the late 18th century in this community were served by circuit riders. The area, once called Trump, is now known as West Liberty, a neighborhood within the unincorporated community of White Hall in northern Baltimore County. (Amy Davis/Baltimore Sun) 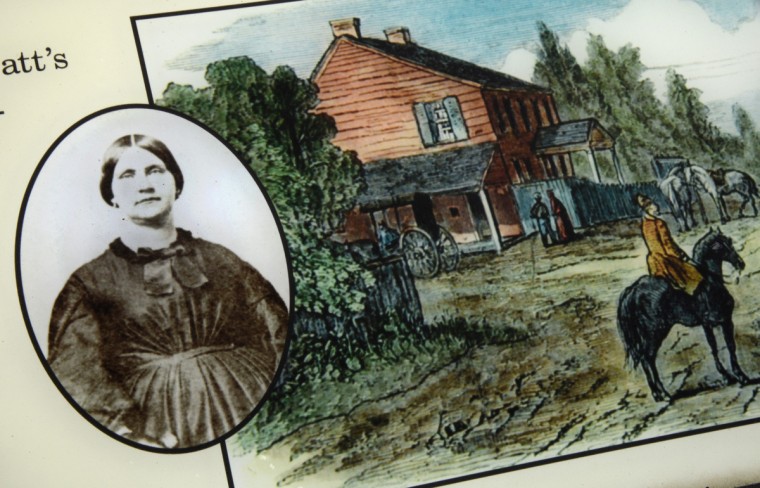 Mary Surratt, at left on an educational panel outside the Surratt House Museum, was a Confederate sympathizer who was hung for her aid to John Wilkes Booth after his assassination of President Abraham Lincoln. The Surratt Tavern, pictured in the illustration, also operated the Post Office, which gave the area its name, Surrattsville. The notoriety led to the name change from Surrattsville to Robeysville, and in 1879, the area was renamed Clinton. (Amy Davis/Baltimore Sun) 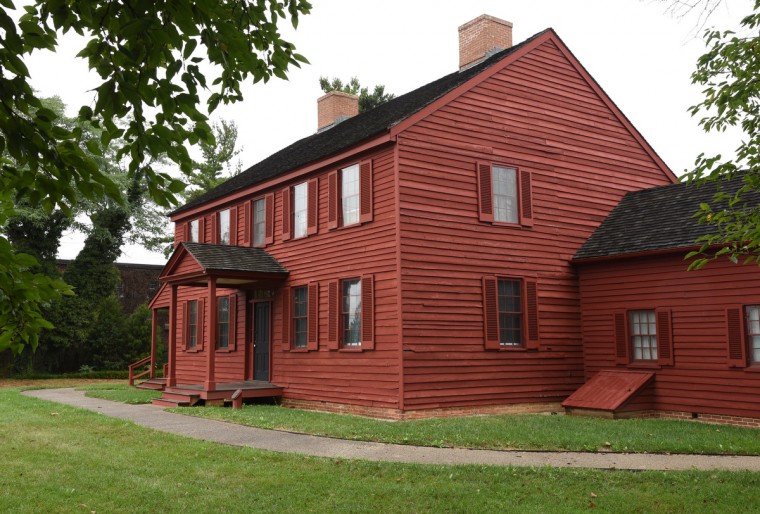 The home built for John and Mary Surratt in 1852 served as a tavern, hotel, and post office, which gave the area the name Surrattsville. After Mary Surrat was hung for aiding Lincoln assassin John Wilkes Booth, the town’s name was changed briefly to Robeysville, and then in 1879 to its present name of Clinton. The property on Brandywine Road is now the Surratt House Museum. (Amy Davis/Baltimore Sun) 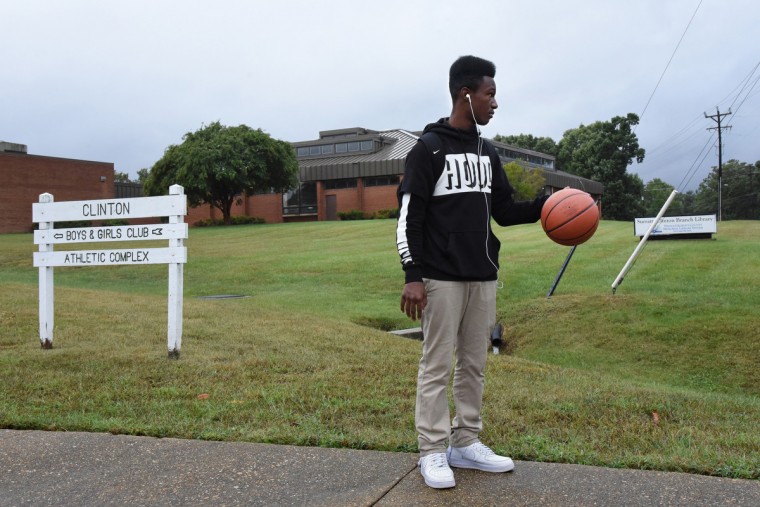 Amman Aryeetey, 15, bounces a basketball as he waits for a ride home to Accoceek. His family has roots in Clinton because his grandfather worked at Andrews Air Force Base, and his grandparents still live in Clinton. (Amy Davis/Baltimore Sun) 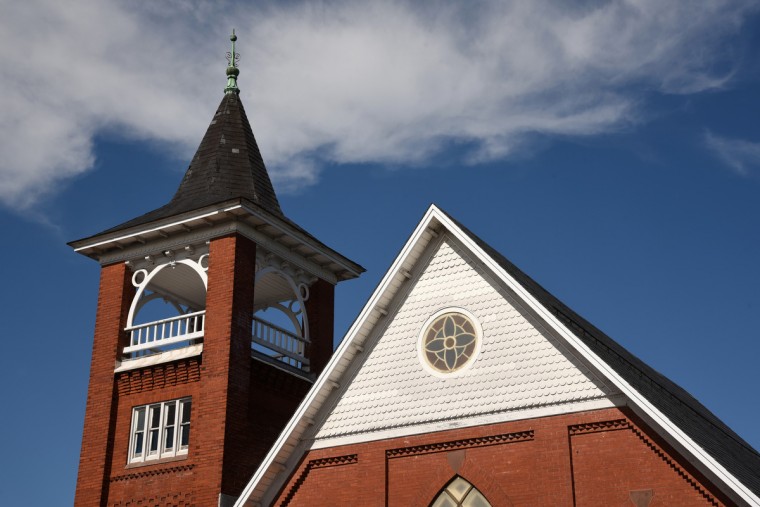 The well-maintained West Liberty United Church was built in 1898 using bricks from the 1819 Methodist chapel on this site. The 228-year old church is the heart of the West Liberty community, which included the area known as Trump in the 19th century, but is now part of White Hall in northern Baltimore County. (Amy Davis/Baltimore Sun) 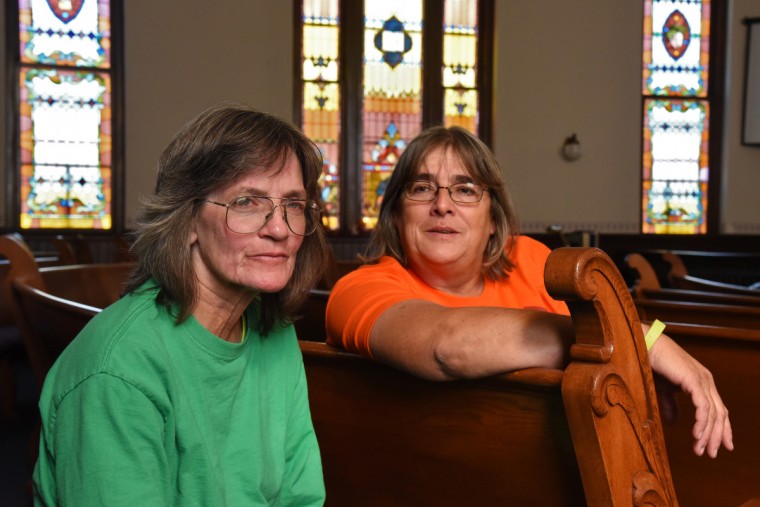 Mary Beth Gemmill, 57, left, and Alice Ensor, 59, right, grew up together in the West Liberty community. Both said they would wait until after the debates to choose their candidate, but Mary Beth Gemmill commented that the first debate was a “pretty even draw.” When asked how she would vote If the election were held tomorrow, Gemmill said, “I’d probably have to vote for Trump.” They were photographed at the West Liberty United Methodist Church, where they both work part-time. (Amy Davis/Baltimore Sun) 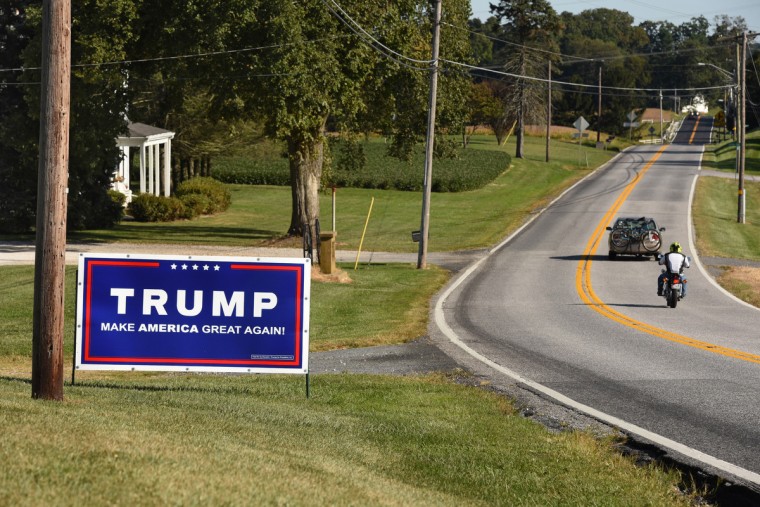 Maryland is not a battleground state, but the fiery first debate has pulled even those not engaged in the sport of politics into the fractious national conversation about Donald Trump and Hillary Clinton. I thought it would be fun to visit the communities of Clinton and Trump to see if these residents had any special allegiances to the presidential candidates who share their community’s name.

Clinton is a middle class, predominantly African-American community in Prince George’s County, filled with government workers who commute to Washington, DC, Virginia or the nearby Andrews Air Force Base. Its unusual brush with presidential history stems from its most famous resident, Mary Surratt, the tavern owner who aided John Wilkes Booth after his assassination of President Lincoln. The notoriety spelled the end for the village’s name of Surrattsville. It was briefly renamed Robeysville, and became Clinton in 1879.

Trump, a small crossroads in Baltimore County, about five miles from Pennsylvania, was named after a nineteenth century settler named Simeon O. Van Trump, who ran a grocery store at Old York Road near West Liberty Road. Today few remember the Trump name, though it is still a neighborhood labeled on street maps. The farming community retains many descendants from the families of Van Trump’s day, and their names can be found on street signs, and on the gravestones behind the 228-year old West Liberty United Methodist Church. The West Liberty neighborhood, as Trump is now known, is part of White Hall.

By coincidence, in a very informal and limited survey of area residents, political preferences seem to match up consistently with the name of each community. This pair of quiet, settled communities also reflects the polarity of the country at large. The theme of change came up frequently, but means different things to different people.

« Olympians at the White House » Scenes from Paris Fashion Week