From the vault: Terrapin, the forgotten Maryland delicacy 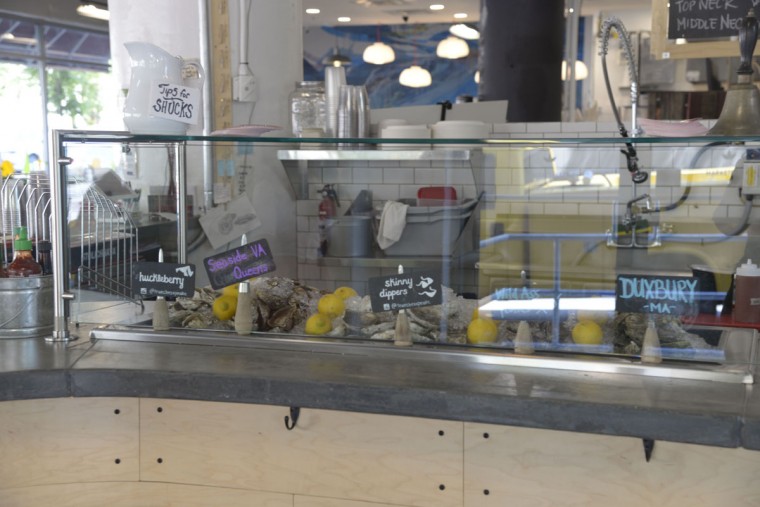 Don’t expect this old-school delicacy to make a comeback anytime soon. For one thing, terrapin fishing is illegal in the state of Maryland. “It’s kind of like sharfkin soup, you don’t see that around anymore now that everyone’s hip to environmental issues,” says Jordie Miller, kitchen manager at the Local Oyster. (Christina Tkacik/Baltimore Sun) 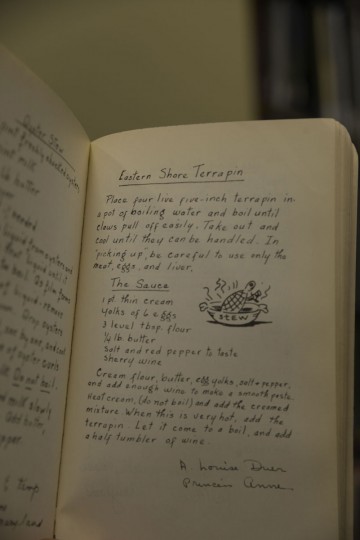 A recipe for terrapin stew in a book of Maryland cooking. A heavy pour of sherry or madeira would “help cut the weird taste,” says Sun columnist Jacques Kelly, who tasted the stuff at the Maryland Club, once famous for their terrapin stew. (Christina Tkacik/Baltimore Sun) 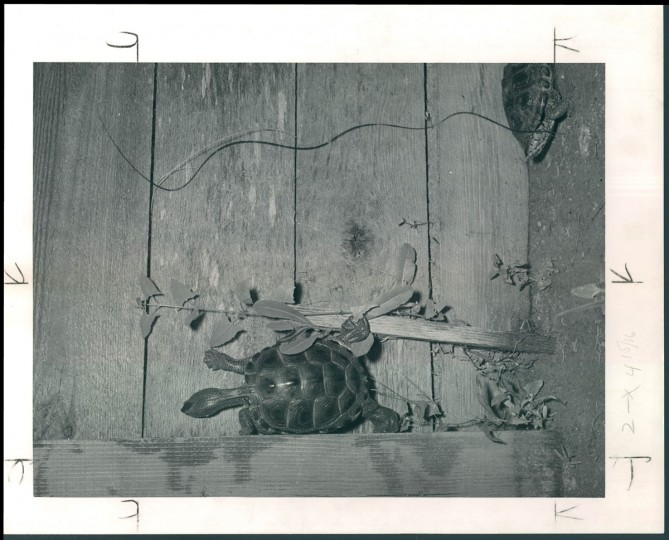 This photo from November 14, 1948 shows a captured terrapin on its way to the marketplace. Though terrapin was once the signature delicacy in Maryland cuisine, by the 1940s, it had declined substantially. The Sun reported in 1952 that “The fishermen don’t know what to do with them, because people won’t eat them.” (Bodine/Baltimore Sun) 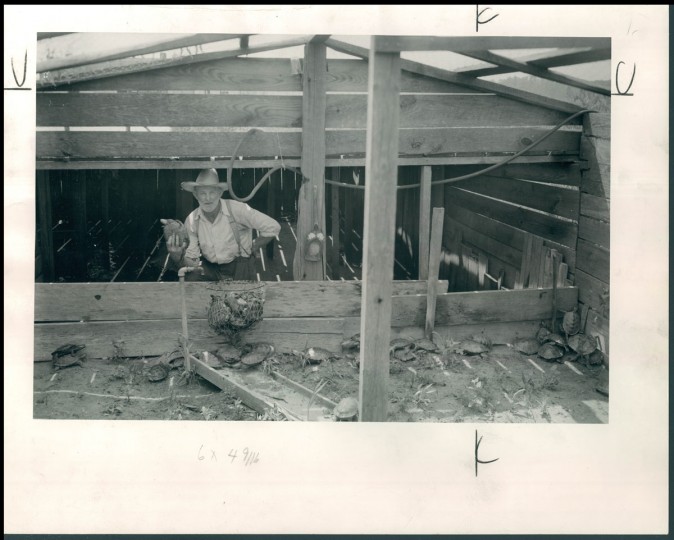 November 14, 1948-Miles Hancock and terrapins. Though terrapin was once the signature delicacy in Maryland cuisine, by the 1940s, it had declined substantially. The Sun reported in 1952 that “The fishermen don’t know what to do with them, because people won’t eat them.” (Bodine/Baltimore Sun) 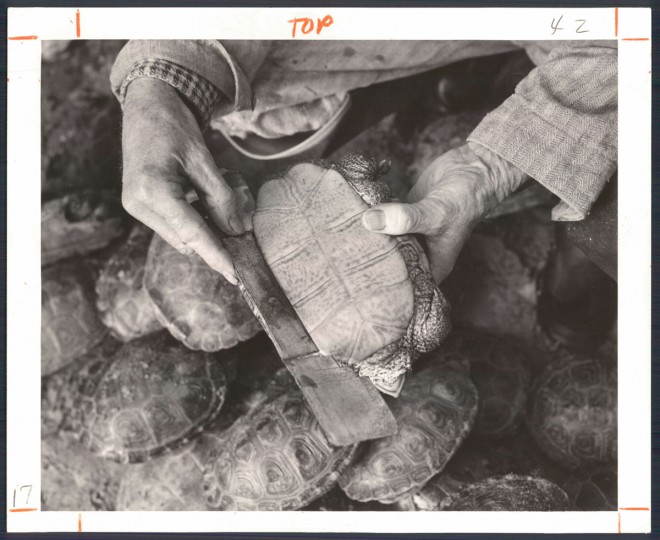 A 1962 photo illustrates how a terrapin is measured. Marketable sizes at the time ranged from 4 to 7 inches and more. The prices at that point ranged from $6 to $24 per dozen. (Bodine/Baltimore Sun) 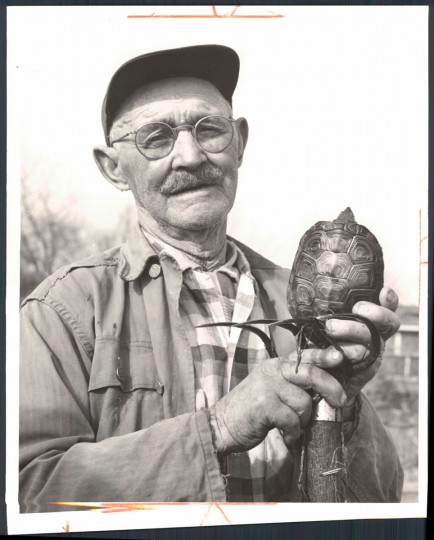 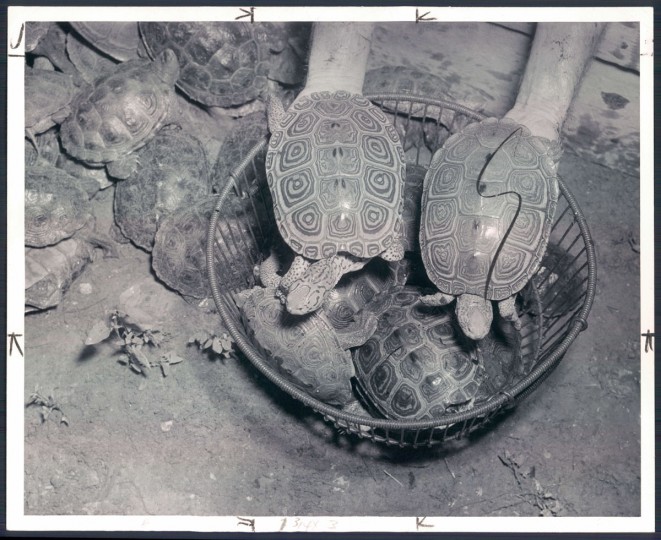 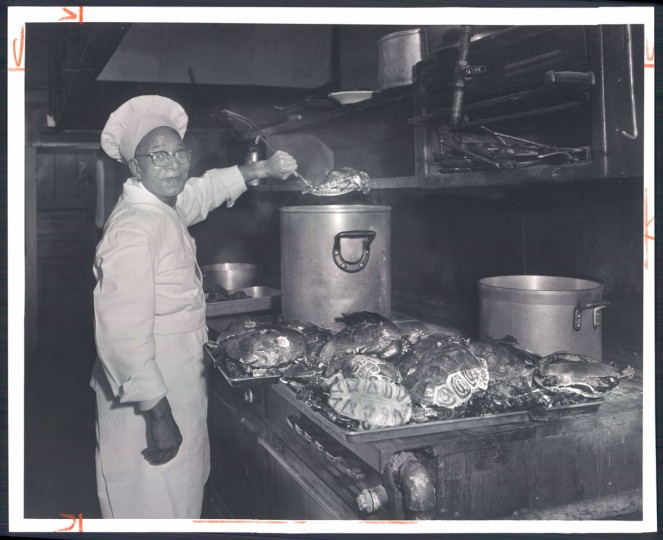 February 18, 1962-DIAMONDBACK TERRAPIN–Arthur C. Branch a terrapin cook for 20 years preparing some at the Maryland Club, where 150 to 200 are used each week in season. The Maryland Club was long considered (Bodine/Baltimore Sun) 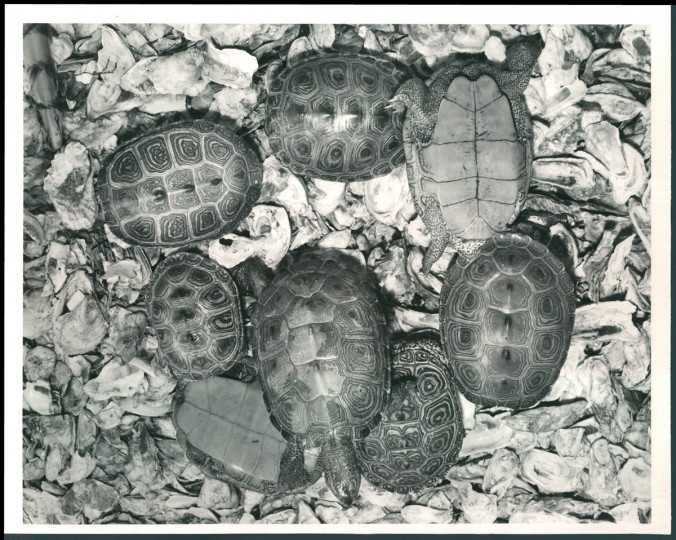 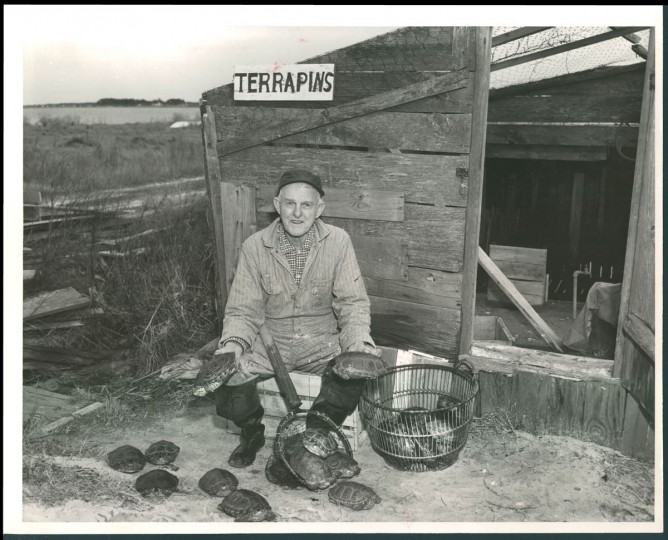 Miles Hancock with his terrapins, 1962. He pronounced the word “tappen” in his soft Virginia tidewater accent, according to The Sun. (Bodine/Baltimore Sun) 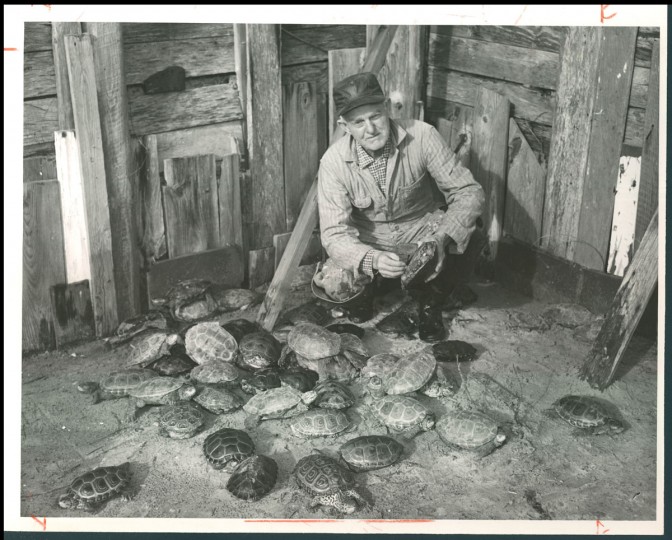 Photo from February 18, 1962 shows Miles Hancock and part of his terrapin “herd.” A Chincoteague Islander he rounds up terrapin in nearby marshes and sells up to 4,000 in a year. (Bodine/Baltimore Sun) 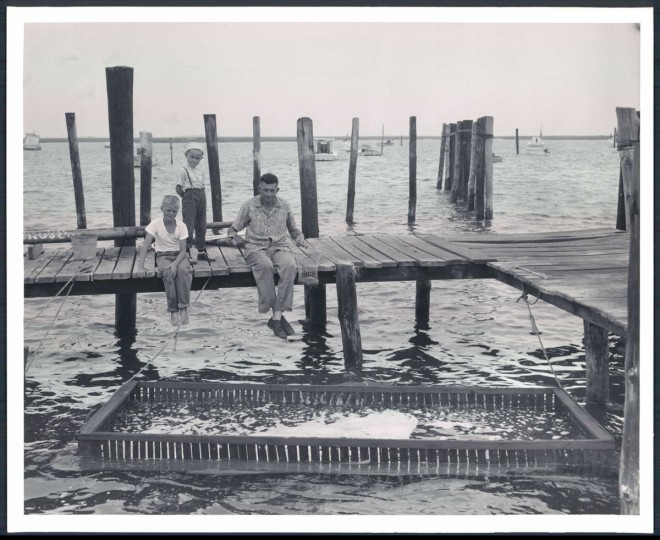 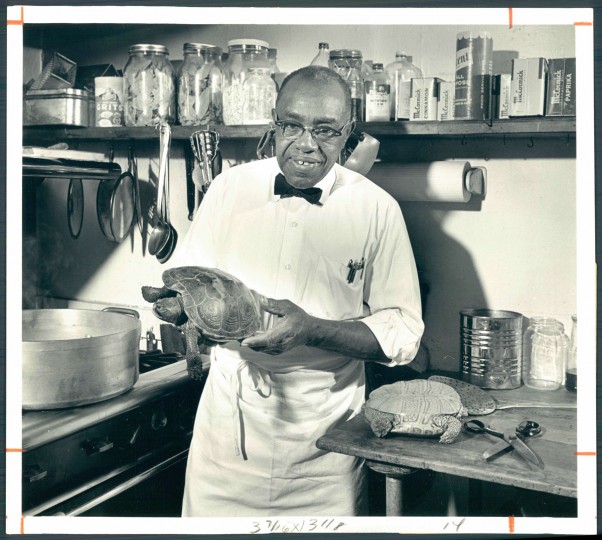 September 18, 1966-Chef Milford E. Jefferson, caterer of 534 Gold Street prepares terrapin. Terrapin was the beluga caviar of Maryland until around the mid 20th-century. At one point, wealthy homeowners in Mount Vernon reportedly kept elegantly-designed pools in their basement for the safekeeping of the diamondbacks, til they were ready for the pot. (William L. Klender/Baltimore Sun) 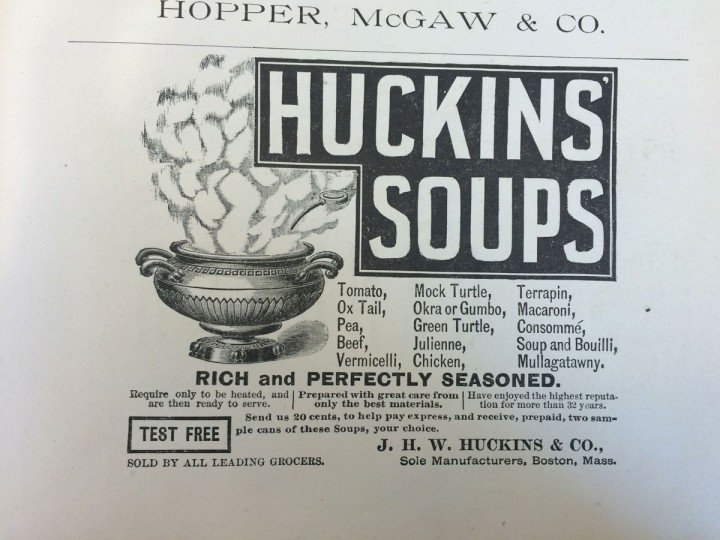 An 1890 advertisement for terrapin soup, once considered a delicacy in Maryland. (Christina Tkacik/Baltimore Sun) 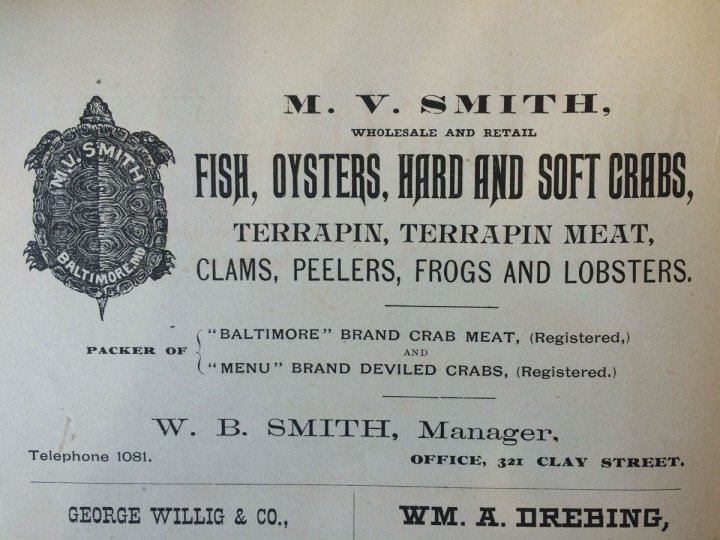 An 1890 advertisement for terrapin, once considered a delicacy in Maryland. (Christina Tkacik/Baltimore Sun) 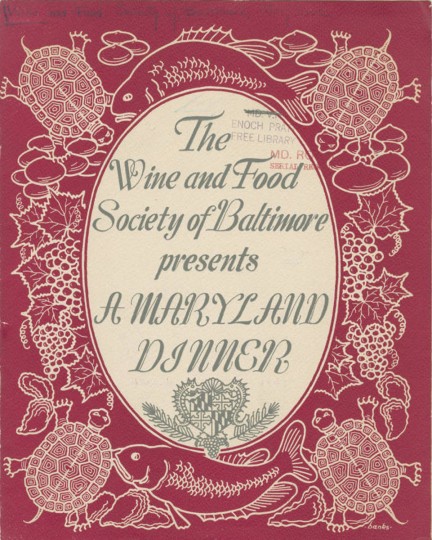 Terrapin was a staple at fancy banquets and dinners in the 18th and 19th centuries, as this menu from a 1947 dinner at the Belvedere Hotel demonstrates. The inside menu reveals lists the courses for the “terrapin and seafood dinner,” presented by the Wine and Food Society of Baltimore, Maryland. “The Maryland diamond-back terrapin” was served as the third course, along with Maryland beaten biscuits. (Image courtesy of Digital Maryland/Enoch Pratt Free Library/State Library Resource Center in Baltimore) 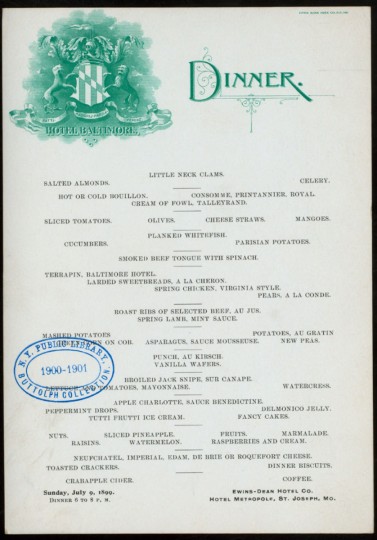 Terrapin even found its way West to St. Louis, Missouri, onto the 1899 menu of the Hotel Baltimore. (Image courtesy of the New York Public Library)

Today, the terrapin is known for being the mascot of the University of Maryland. But there was a time when the diamondback was the signature delicacy of Maryland cuisine. Today one might wear a Rolex; in the “Gay Nineties” of the 1890s, you’d be eating turtle. Hoity toity residents of Baltimore’s Mount Vernon neighborhood even designed special pools in their basements to keep terrapin before they were ready for the chopping block. It was said that the great French General Marquis de Lafayette returned to the United States after the American Revolution mainly so he could try the dish again.

(Ironically, the same way lobster was once considered garbage food and served only to prisoners, the elite dish was originally restricted as food for slaves in the Tidewater region. But tastes change.)

By the 1900s, terps had been fished near to the point of extinction several times, and quotas had to be placed on their capture. Their prices reflect their scarce supply: in 1899, a dozen six-inch terrapin could cost up to $45.

Recipes called for the poor things to be boiled live like lobster, then served with copious amounts of butter as well as sherry or dry madeira.

“The sherry helped cut the weird taste,” says Sun columnist Jacques Kelly, who tried terrapin at an event at the Maryland Club – once considered “the very shrine of terrapin-eating,” according to a 1952 article in The Sun. “The taste was kind of a marshy woodland – you couldn’t help but think of a turtle when you ate it.”

What’s more, it had a weird gummy, slimy texture – but not a pleasant one. “A lot of people tried it once,” Kelly said, “but for every one who tried it, probably only one in 50 actually went back and loved it to have more.”

Terrapin eating seems to have dropped off during the Great Depression — though it was still on the menu at selected restaurants like the Maryland Club until fairly recently. There were rumors the expensive tortoise might make a comeback in gourmet restaurants in the 1950s, but that seems to have never materialized. A major factor was price: in 1952, they were selling at $18 for a dozen six-inch terrapin, which may be a steal compared to those 1899 prices, but is still a lot of money to pay for something that tastes like “marshy woodland.”

The Maryland Club says they no longer serve diamondback, and you won’t see it on menus in Baltimore restaurants anytime soon. For one thing, terrapin fishing is illegal, and the last remaining commercial terrapin fishery closed in 2007.

“I feel like there’s a stigma against turtles – serving turtles on a menu,” says Jordie Miller, 28, the kitchen manager at the Local Oyster in Mount Vernon Marketplace, which serves sustainably sourced meats and seafood.

“It’s kind of like sharfkin soup. You don’t see that around anymore now that everyone’s hip to environmental issues.”