From the vault: Dolphins at the National Aquarium

Dolphins have never been native to Baltimore, but the city has had them anyway for years thanks to the National Aquarium, which acquired its first flippers when it opened in the early 1980s. This week, the institution announced plans to relocate their eight remaining dolphins to a sanctuary by 2020. Here’s a look back at the history of these mammals in Baltimore. 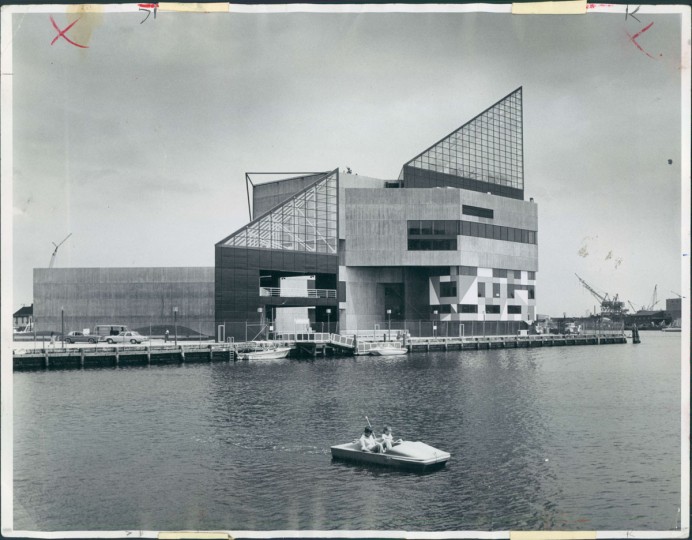 The National Aquarium seen from across the Inner Harbor, September 15, 1983. (Klender/Baltimore Sun) 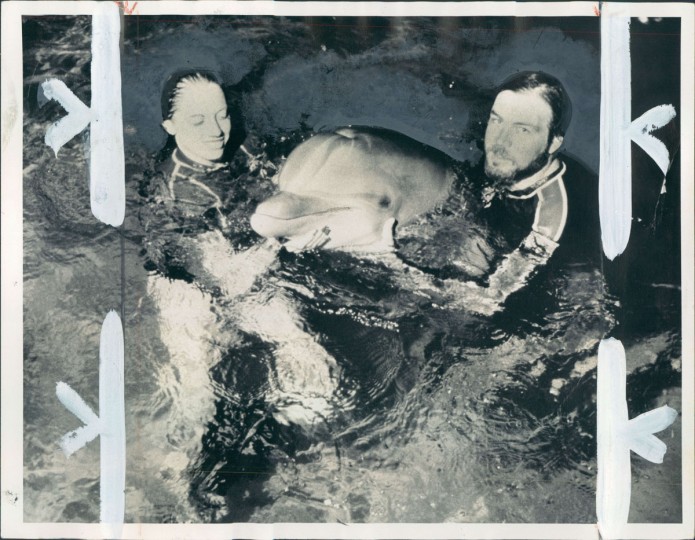 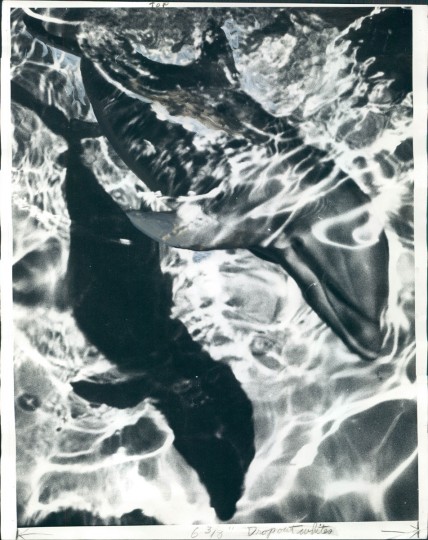 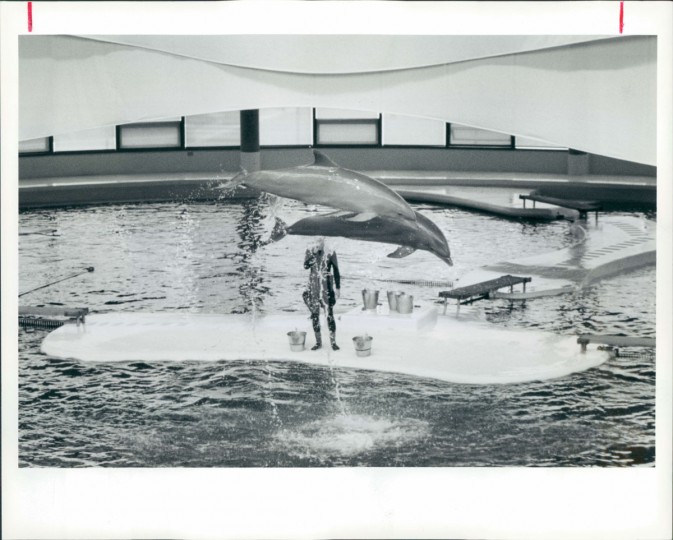 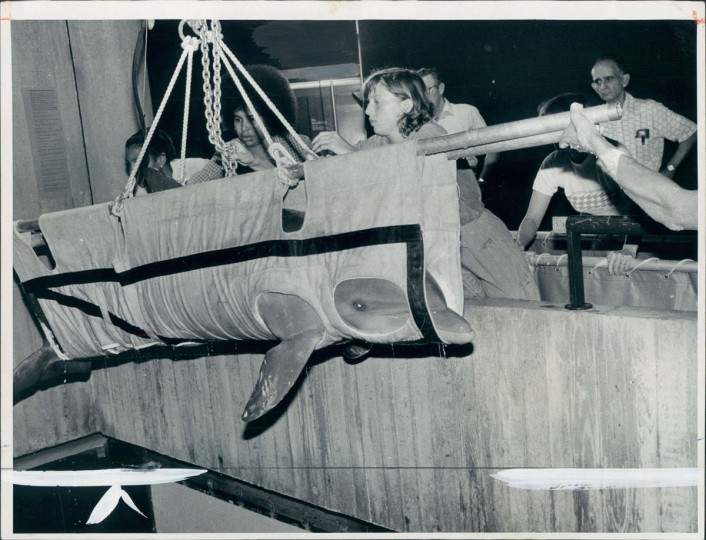 August 10, 1983: A docile Aphrodite takes her last look at the dolphin pool in the National Aquarium as workers hoist her out for her retirement trip to Florida. (Pearson/Baltimore Sun) 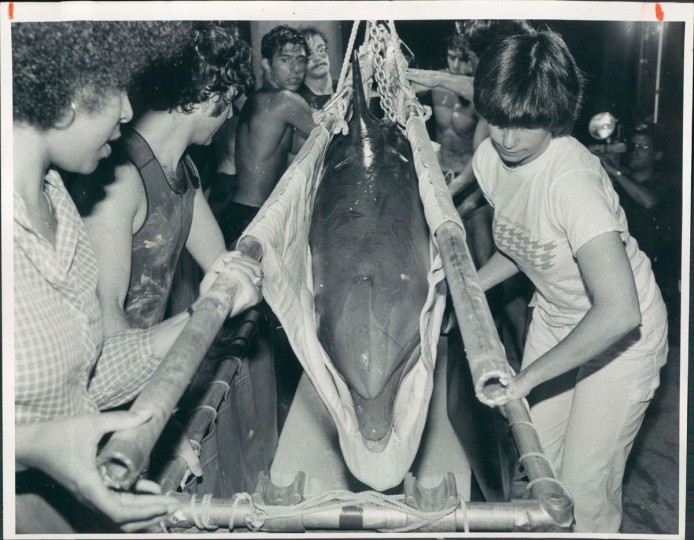 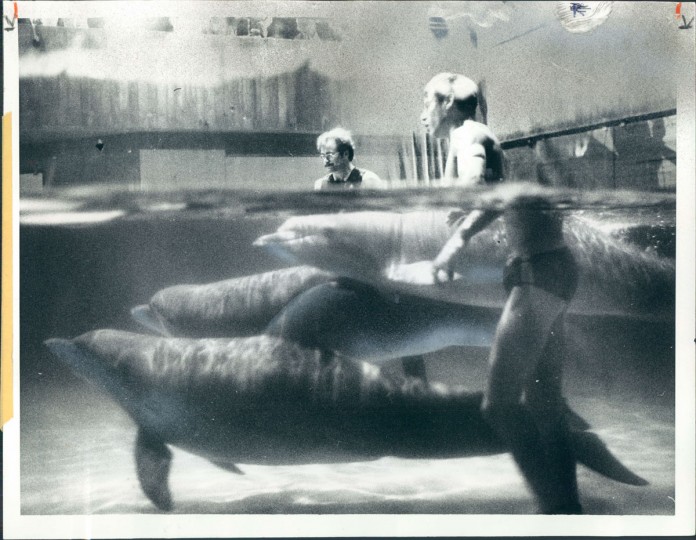 August 12, 1982: Workers at Baltimore’s National Aquarium–their figures distorted in this view through the transparent tank–herded three dolphins toward special slings yesterday for a trip to their likely retirement home in Florida. The dolphins–Mimi, Aphrodite and Kibby… have developed ulcers and other stress-related problems which aquarium officials believe were caused by design deficiencies in their tank. The dolphins were flown to the Flipper Sea School at Grass Key. (Pearson/Baltimore Sun) 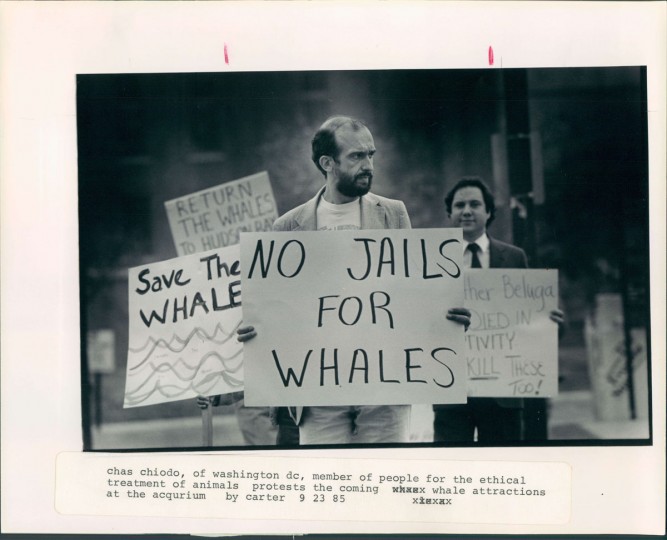 September 24, 1985: Charles Chiodo (Chlodo) of PETA protests the presence of marine mammals at the National Aquarium in Baltimore. (Carter/Baltimore Sun)

Dolphins have had a somewhat rocky tenure at the Aquarium. In 1982, three of the dolphins then held at the aquarium were sent to live in a “retirement home” in Florida after developing ulcers. “Their symptoms are both psychological and physical,” said the Aquarium’s associate director, William S. Flynn. They had become stressed: Aphrodite, the dominant female dolphin, was reacting negatively to sexual advances from Kibby, the dominant male. Flynn said part of the problem was that the dolphins lacked any access to sunlight in their tank, since a skylight wasn’t considered “aesthetically desirable” at the time.

Controversy marred the opening of the aquarium’s $35 million marine mammal pavilion in 1990, with conservationists criticizing the aquarium’s efforts to capture wild dolphins in Florida and transport them to Baltimore. For Benjamin White Jr. of the Sea Shepherd Conservation Society, the chief injustice was that the animals were in captivity at all. “Those dolphins in the aquarium are screaming to me, ‘Get me the hell out of here,'” White told The Sun. “That’s what I am trying to do.”

That year, the pavilion opened with an exhibition the aquarium was careful to term a “presentation” and not a “performance” – which would have connoted something along the lines of a zoo. Sun reporter Patrick McGuire lampooned the terminology in the paper: “On a Saturday morning when Uncle Bob, Aunt Lucy and the twins are visiting from Binghamton and getting fidgety, you can raise an index finger, cock an eyebrow and say, ‘What ho! Let’s motor down to the aquarium and observe a dolphin presentation.'”

If the Aquarium seemed to be having a crisis of identity back in the 1990s – that is, whether it was a circus-style, money-making attraction or an educational facility – the new announcement should help it transition more easily into a center for conservation.

And there’s no more need to worry about Aphrodite’s chilly reception.