Scenes of a slow progression toward prison closure at Guantanamo

WASHINGTON (AP) — The top U.S. general overseeing the Guantanamo Bay, Cuba, detention center says claims that the Pentagon has delayed the release of detainees are nonsense. But he acknowledged concerns that some detainees have returned to the battlefield.

Marine Gen. John Kelly, head of U.S. Southern Command, says there has been an increase in the number of officials from foreign countries visiting Guantanamo to finalize decisions to transfer a detainee to their nation.

The Defense Department has long been criticized over the slow pace of transfers.

He dismissed suggestions that the expected transfer of 17 detainees this month adds credence to the argument that approvals have previously been slow.

Here is a non-comprehensive, reverse-chronological gallery of Guantanamo images, from current protests back to the early days. 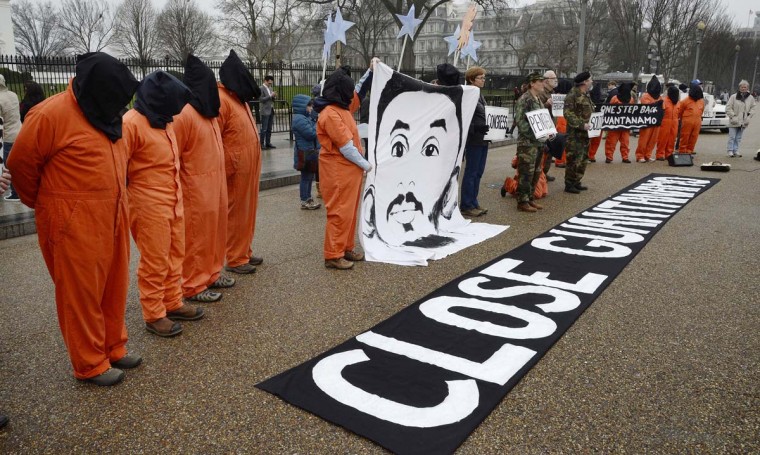 Protesters wearing orange jumpsuits and bags over their heads rally outside of the White House to protest Guantanamo Bay on the incoming 14th anniversary of the first prisoners arriving at the detention facility, on Jan. 8, 2016 in Washington, D.C. On January 11 it will be the 14th anniversary of the opening of the prison at Guantanamo Bay, and the start of its 15th year of operations. (Olivier Douliery/Abaca Press/TNS) 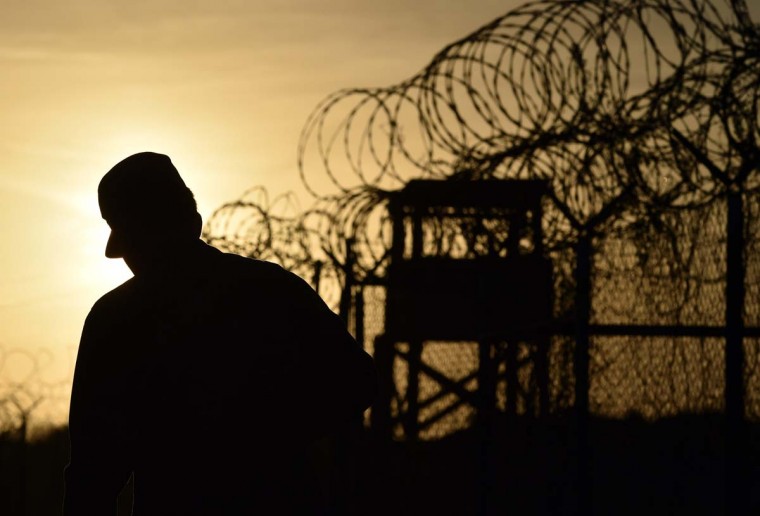 FULL, UNCHANGED ARCHIVE WIRE CAPTION:
This photo made during an escorted visit and reviewed by the US military, shows an US soldier walking next to the razor wire-topped fence at the abandoned “Camp X-Ray” detention facility at the US Naval Station in Guantanamo Bay, Cuba, April 9, 2014. || CREDIT: MLADEN ANTONOV (PHOTO CREDIT SHOULD READ – AFP/GETTY IMAGES 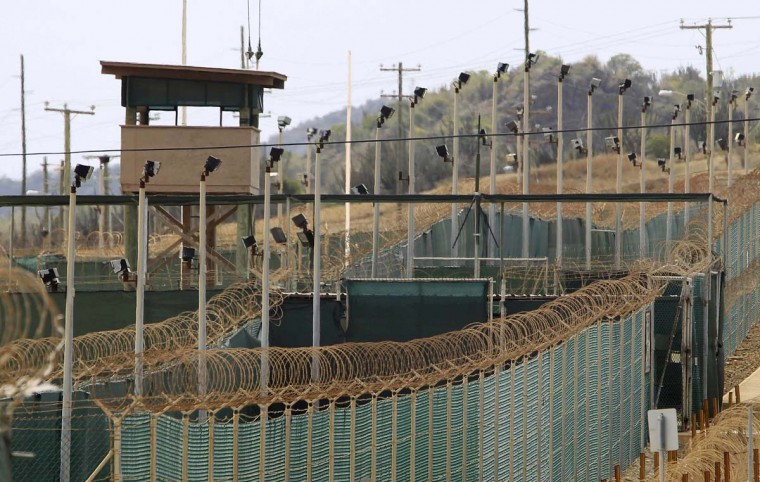 FULL, UNCHANGED ARCHIVE WIRE CAPTION:
The exterior of Camp Delta is seen at the U.S. Naval Base at Guantanamo Bay in this file photo taken March 6, 2013. With his renewed vow to close the detention camp for foreign terrorism suspects at Guantanamo Bay, U.S. President Barack Obama has effectively assigned himself a list of possible ways to take the prison’s population down from 166 to zero. || PHOTO CREDIT: BOB STRONG/FILES – REUTERS 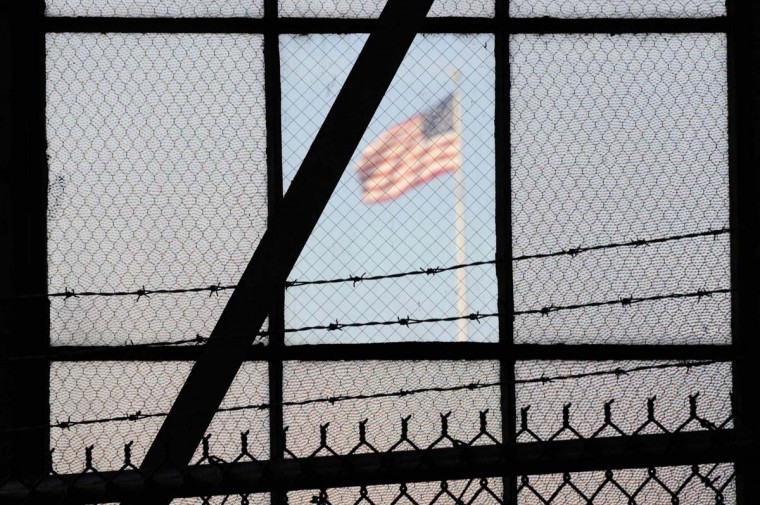 FULL, UNCHANGED ARCHIVE WIRE CAPTION:
The flag over a war crimes courtroom in Camp Justice at US Naval Base Guantanamo Bay in Cuba in this photo reviewed by the U.S. Department of Defense on October 17, 2012, day three of pre-trial hearings for the five Guantanamo prisoners accused of orchestrating the 9/11. || PHOTO CREDIT: MICHELLE SHEPHARD/TORONTO STAR/POOL – REUTERS 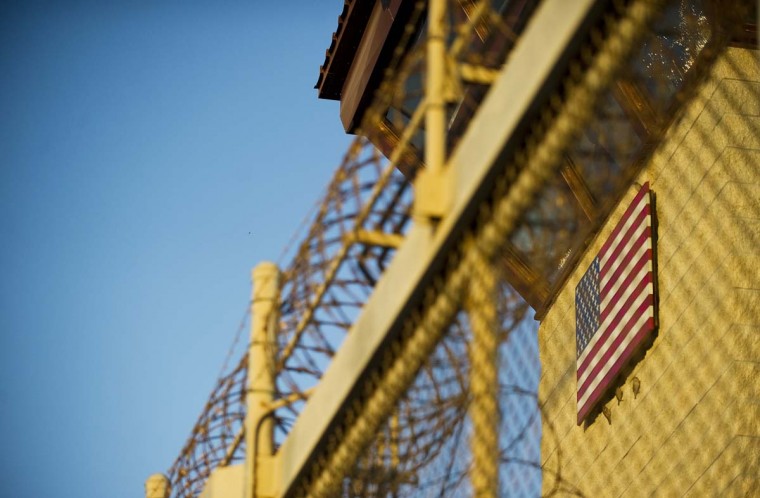 FULL, UNCHANGED ARCHIVE WIRE CAPTION:
(FILES) This January 19, 2012 file image reviewed by the US military shows the guard tower at the front gate of “Camp Five” and “Camp Six” detention facility of the Joint Detention Group at the US Naval Station in Guantanamo Bay, Cuba . The alleged mastermind of the September 11, 2001 attacks and his four accused co-plotters will be formally arraigned by a military tribunal on May 5, 2012 at Guantanamo Bay, US officials said on April 10, 2012. || CREDIT: JIM WATSON/FILES (PHOTO CREDIT SHOULD READ – AFP/GETTY IMAGES 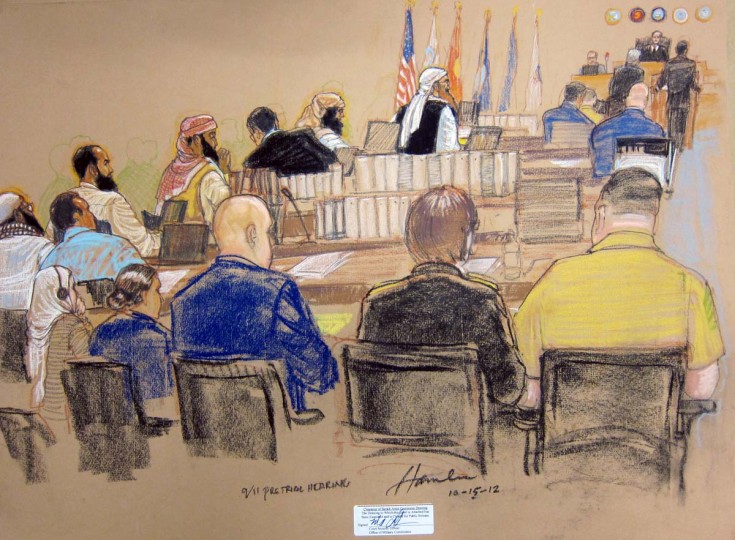 FULL, UNCHANGED ARCHIVE WIRE CAPTION:
This courtroom sketch by artist Janet Hamlin shows the alleged five men(above) accused of conspiracy in the September 11, 2001 attacks shown sitting at their Military Commissions hearing on October 15, 2012 at the US Navy base Guantanamo Bay, Cuba. Long-delayed efforts to try Khalid Sheikh Mohammed and four Al-Qaeda co-defendants finally got under way on Monday with a pre-trial hearing at Guantanamo. Eleven years after the attacks and nine-and-a-half years after his capture in Pakistan, KSM sat on a court bench wearing a white turban, his beard dyed with henna, as victims’ family members looked on from behind a glass screen. EDITORS NOTE-A court security officer approved this sketch for release in a sticker on the bottom. SHOWN FROM LEFT, Mustafa Hawsawi, Ammar al Baluchi, Ramzi bin al Shibh, Walid bin Attash and Khalid Sheik Mohammed. Also shown are support staff along the bottom, and the judge, US Army Col.James L. Pohl, at the bench. = RESTRICTED TO EDITORIAL USE – MANDATORY CREDIT ” || CREDIT: JANET HAMLIN/POOL ” – NO MARKETING NO ADVERTISING CAMPAIGNS – DISTRIBUTED AS A SERVICE TO CLIENTS = – AFP/GETTY IMAGES 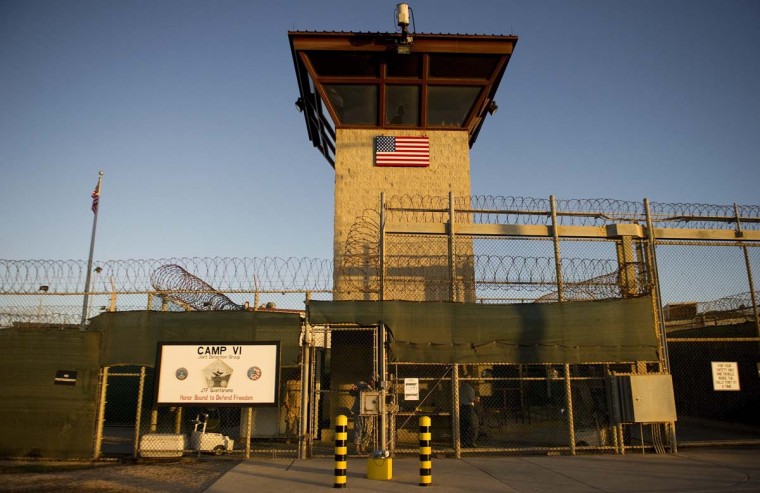 FULL, UNCHANGED ARCHIVE WIRE CAPTION:
(FILES)This January 19, 2012 file photo reviewed by the US military shows the front gate of “Camp Six” detention facility of the Joint Detention Group at the US Naval Station in Guantanamo Bay, Cuba. More than half of the 166 detainees held at the US-run Guantanamo military prison have joined a rapidly growing hunger strike to protest their indefinite detention, an official said April 21, 2013. There are 84 inmates who are refusing food, including 16 on feeding tubes, five of whom are hospitalized, Lieutenant Colonel Samuel House said in a statement, adding that none had “life-threatening conditions.” House said that as recently as Friday there were 63 inmates who were refusing to eat. On Tuesday of last week just 45 were taking part. || CREDIT: JIM WATSON / FILES – AFP/GETTY IMAGES 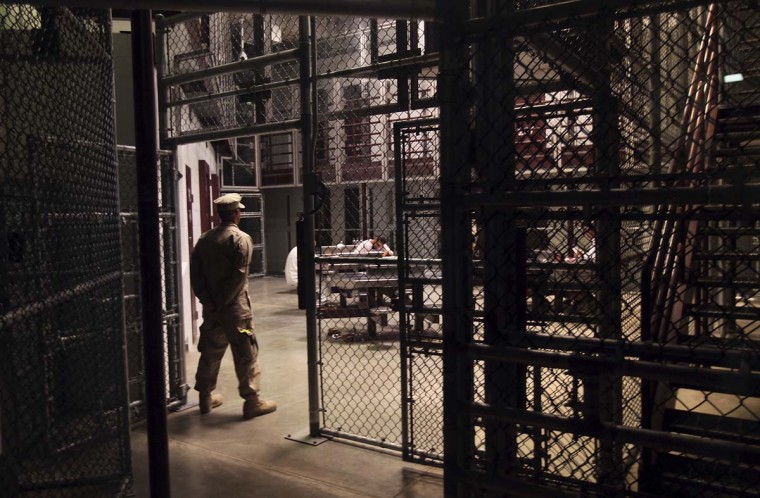 FULL, UNCHANGED ARCHIVE WIRE CAPTION:
GUANTANAMO BAY, CUBA – MARCH 29: (EDITORS NOTE: Image has been reviewed by the U.S. Military prior to transmission.) A U.S. Navy sailor stands guard in a cell block of Camp 6 in the Guantanamo Bay detention center on March 29, 2010 in Guantanamo Bay, Cuba. U.S. President Barack Obama pledged to close the prison by early 2010 but the administration has struggled to transfer, try or release the remaining detainees from the facility, located at the U.S. Naval base on the Caribbean island. (Photo by John Moore/Getty Images) ** TCN OUT ** ORG XMIT: CHI1105041630465072 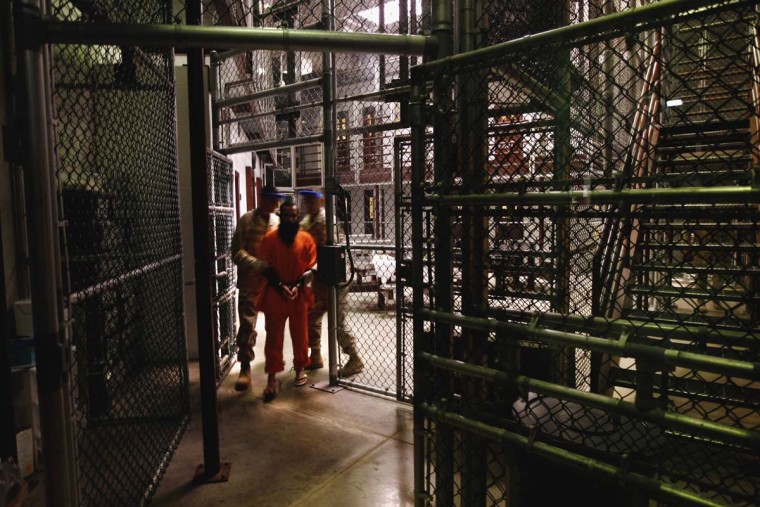 FULL, UNCHANGED ARCHIVE WIRE CAPTION:
GUANTANAMO BAY, CUBA – FILE: (EDITORS NOTE: Image has been reviewed by U.S. Military prior to transmission.) A “non-compliant” detainee is escorted by guards after showering inside the U.S. military prison for “enemy combatants” on October 27, 2009 in Guantanamo Bay, Cuba. According to reports, U.S. President Barack Obama approved March 7, 2011 the resumption of military trials for detainees being held at Guantanamo Bay after a ban of two-years. (Photo by John Moore/Getty Images) ORG XMIT: 92352179 ** TCN OUT ** ORG XMIT: CHI1103071452021360 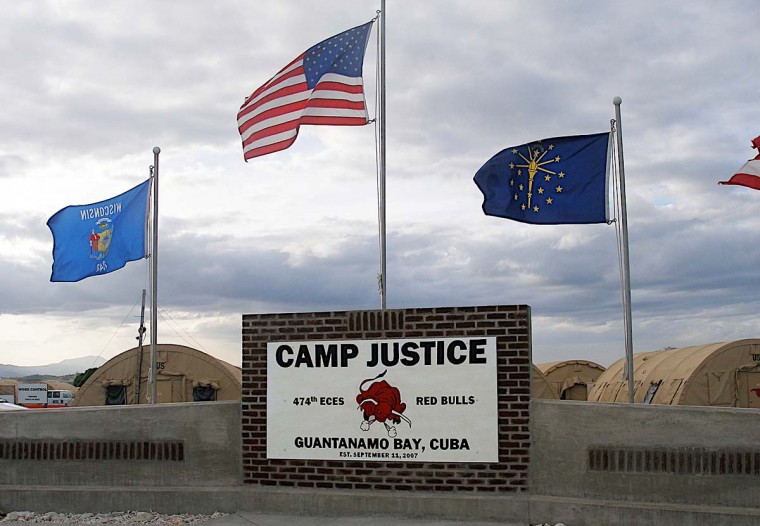 (FILES): This January 8, 2008 file photo shows an exterior view of the Pentagon’s new prefabricated high-tech court complex at Guantanamo Bay naval base called “Camp Justice”, comprised of temporary structures. In the midst of the barbed wire and watchtowers dotting Guantanamo’s green hills, workers continue to build despite US President Barack Obama’s promise to close the prison. Nearly 10 years since the first handful of prisoners arrived from Afghanistan to the US naval base in southern Cuba, 778 terror supects have passed through Guantanamo and been locked up behind the infamous metal fencing. AFP PHOTO / FILES (Photo credit should read -/AFP/Getty Images) ORG XMIT: 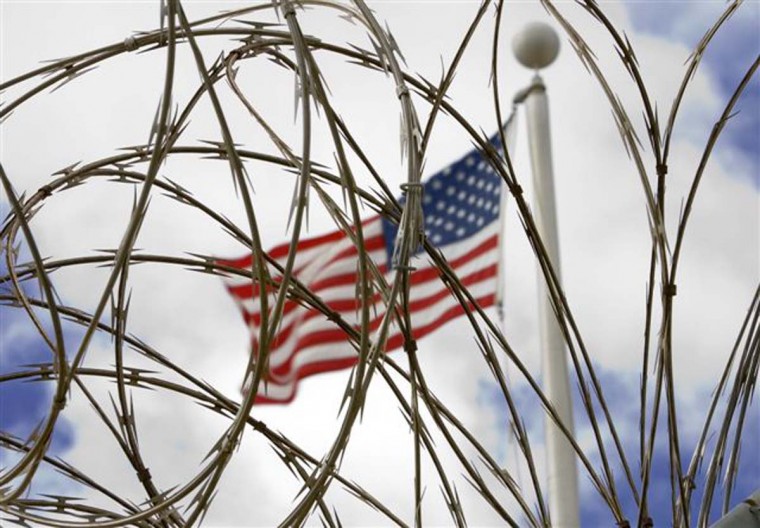 (FILES)The US flag flies above the Camp Delta Maximun Security area in this December 5, 2006 on the US Naval Base at Guantanamo Bay, Cuba. The tenth anniversary of the arrival of the first prisoners to Guantanamo is January 11, 2012. AFP Photo/Paul J. Richards (Photo credit should read PAUL J. RICHARDS/AFP/Getty Images) ORG XMIT: 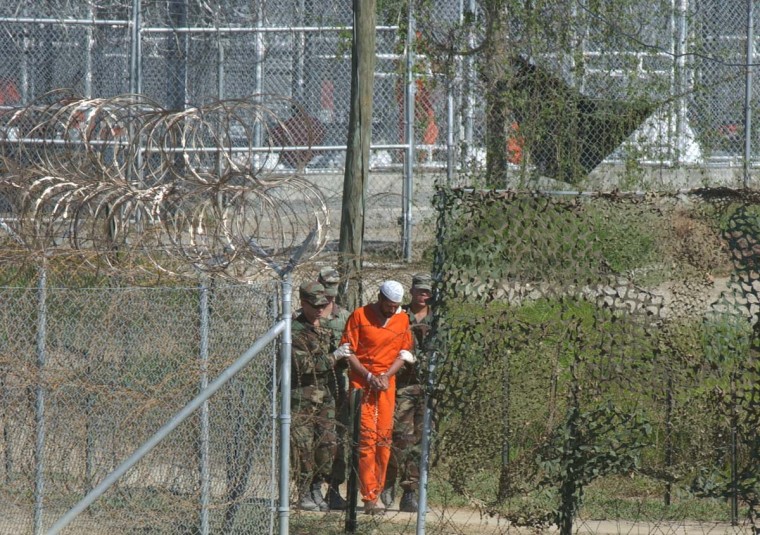 FULL, UNCHANGED ARCHIVE WIRE CAPTION:
FILE – In this March 1, 2002 file photo, a detainee is escorted to interrogation by U.S. military guards at Camp X-Ray at Guantanamo Bay U.S. Naval Base, Cuba. The U.S. government announced Tuesday Dec. 30, 2014, that five men who were held for a dozen years without charge at the U.S. Navy base at Guantanamo Bay, Cuba, have been sent to the Central Asian nation of Kazakhstan for resettlement. || CREDIT: ANDRES LEIGHTON, FILE – AP PHOTO

The CIA kidnapping ordeal of an unlucky German tourist [Gallery]