25 of our favorite snow photos from the Baltimore-area blizzard

Baltimore Sun Media Group photographers and reporters took hundreds of pictures while covering last weekend’s record winter storm. Here are 25 of our favorite staff images of the snowfall and aftermath, taken throughout the Baltimore region. 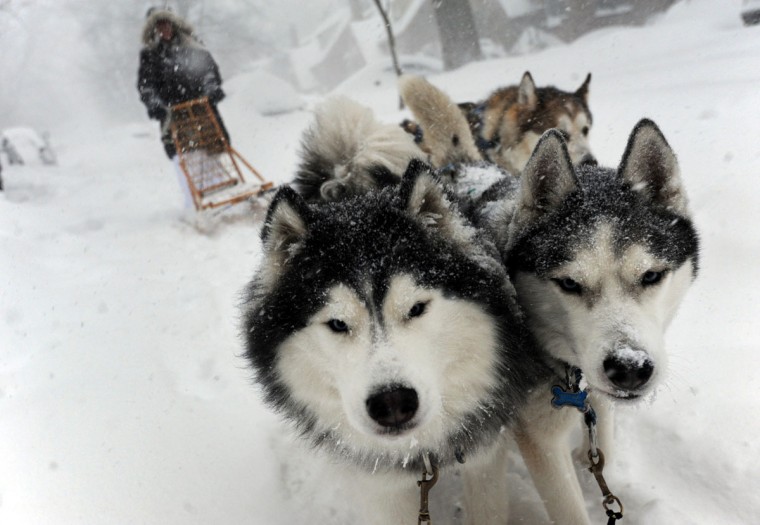 Huskies Merlin, left, and Misty May lead Babs Levedahl as they dog sled in Anneslie on the first full day of the blizzard. Running with them is Ollie, a friend’s Malamut. (Algerina Perna / Baltimore Sun) 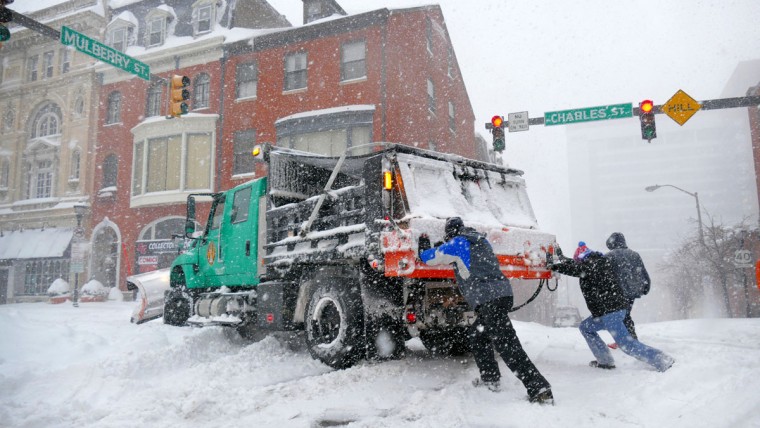 Chris Holder, left, and Chris Hauger try to push a loaded six-wheel dump truck and salt spreader that got stuck at Mulberry and Charles Streets. The Mount Vernon residents were not having much luck, as the truck can weigh upwards of 30,000 pounds while empty. It got stuck as a strong blizzard pummeled the region Saturday. (Karl Merton Ferron / Baltimore Sun) 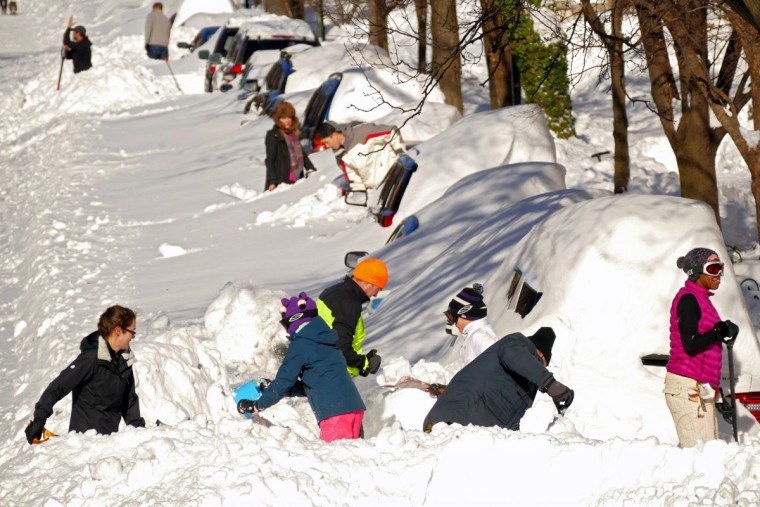 Residents dig out Sunday in Bolton Hill. It could take days to clear away snow, officials warned, with plows and snowblowers not expected to start getting ahead of the more than 2 feet of drifting snow until Sunday. (Karl Merton Ferron / Baltimore Sun) 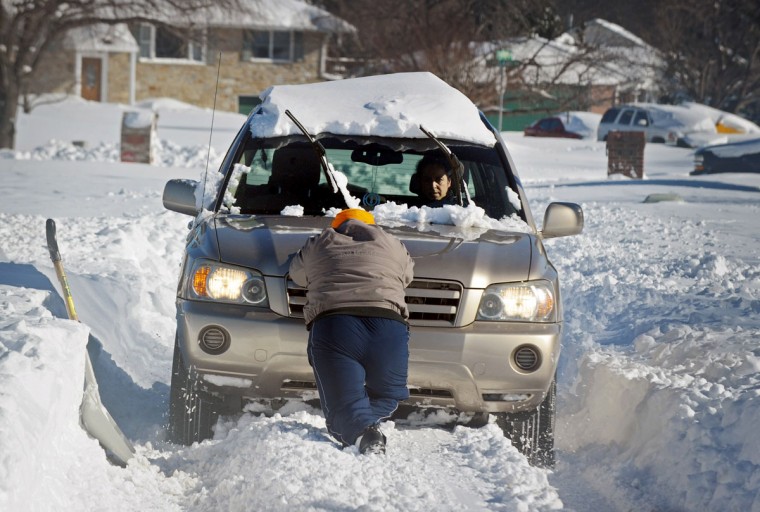 Beljinber Singh, center, pushes his stuck car with his wife Varinder Kaur at the wheel. Singh tries to get his car out of an unplowed road onto Mountain Road, which has been plowed, so he can go to work. Winter storm Jonas dumped over 29 inches of snow in the Baltimore area. (Kenneth K. Lam / Baltimore Sun) 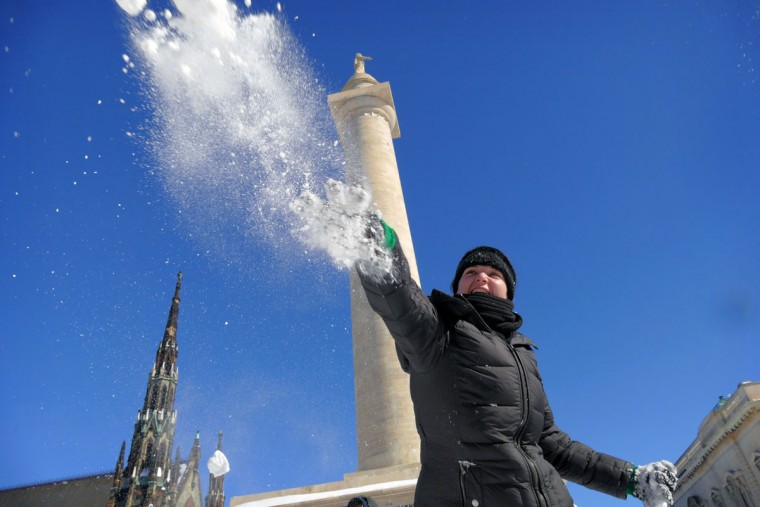 Hundreds of people participate in a snowball war at the base of Baltimore’s Washington Monument in Mount Vernon on the first day since a powerful nor’easter snowstorm hammered the east coast. (Karl Merton Ferron / Baltimore Sun) 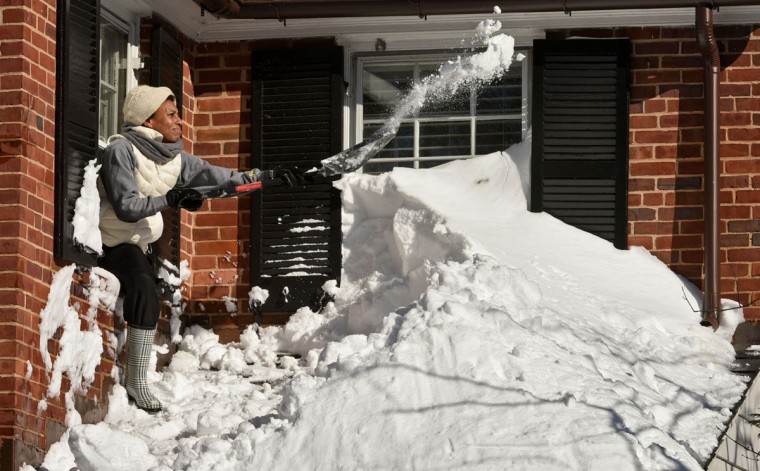 Apryl Doyle leans out her second floor window to shovel snow from her porch roof on Southfield Place in Homeland. The Baltimore region started digging out from a record snowstorm on Saturday. (Amy Davis / Baltimore Sun) 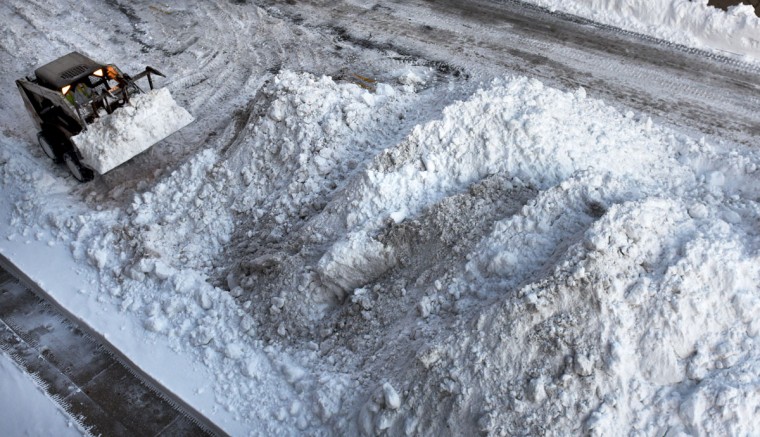 A Bobcat adds to a growing snow pile on Monument Street as it is removed from the 700 block of Calvert Street on Monday morning. (Jerry Jackson/Baltimore Sun) 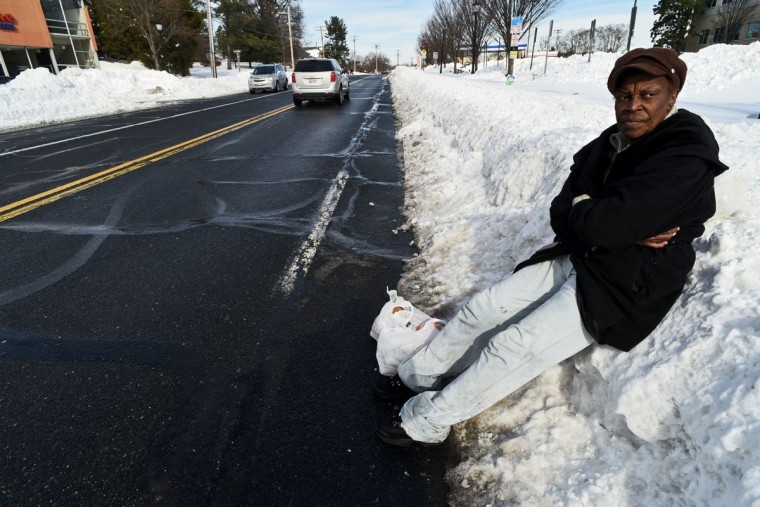 Rose White waited about 45 minutes for No. 8 bus back to Towson after buying groceries at York Road Plaza. (Amy Davis / Baltimore Sun) 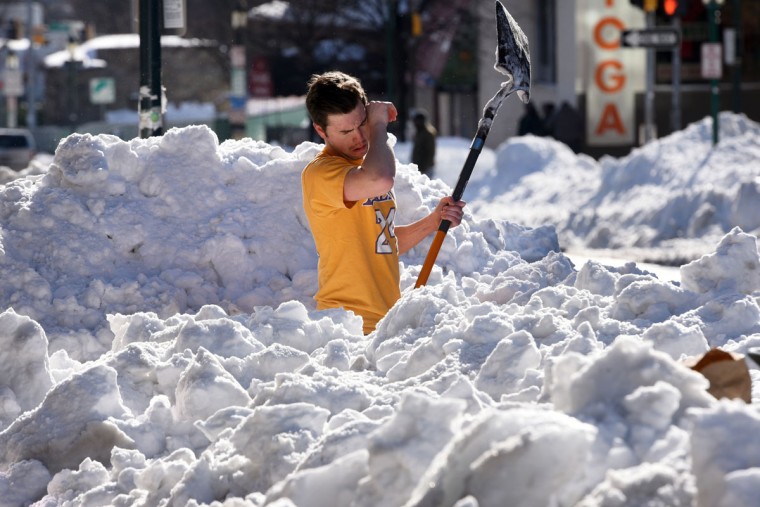 Rhett Reidpath, assistant manager at the Melting Pot restaurant in Towson, pauses as he shovels a path from the entrance to York Road. He said the snow was too compacted to use a snowblower. The restaurant will reopen tonight after being closed for two days. (Amy Davis / Baltimore Sun) 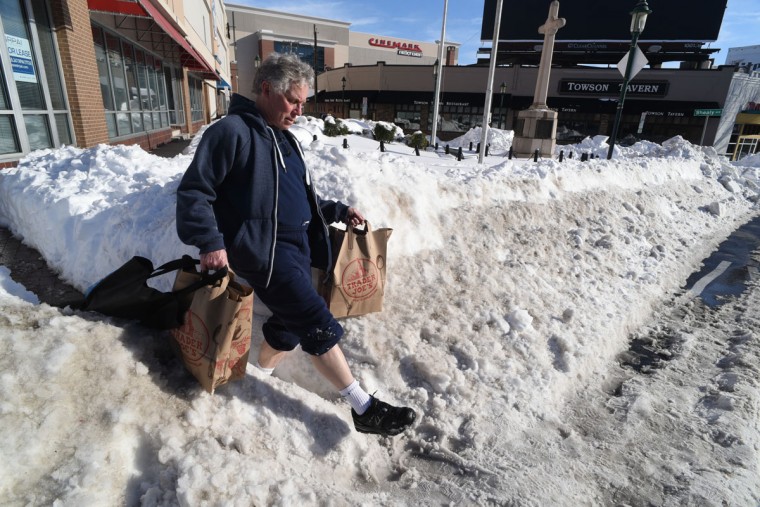 Ronn Pineo of Towson navigates a narrow opening in the snow banks near Towson Circle, after completing some food shopping. Pedestrians in many areas were forced to walk in the street due to uncleared sidewalks. (Amy Davis / Baltimore Sun) 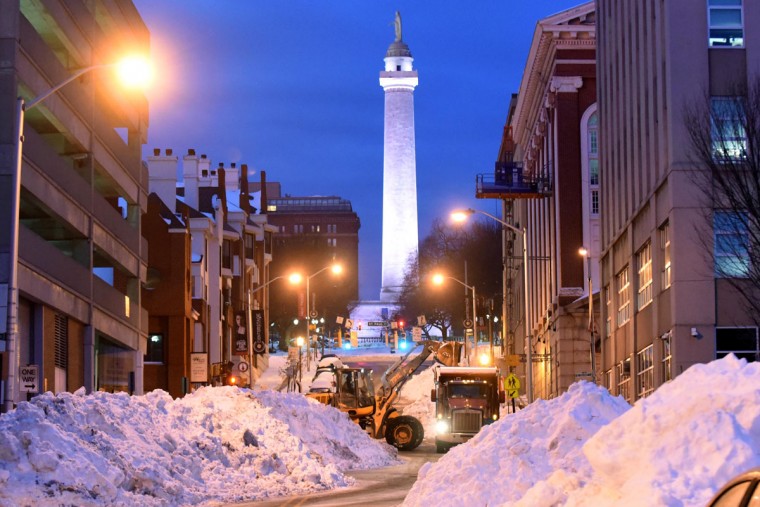 A front-end loader works to remove snow piles on Monument Street at Calvert before dawn on Tuesday. (Jerry Jackson/Baltimore Sun) 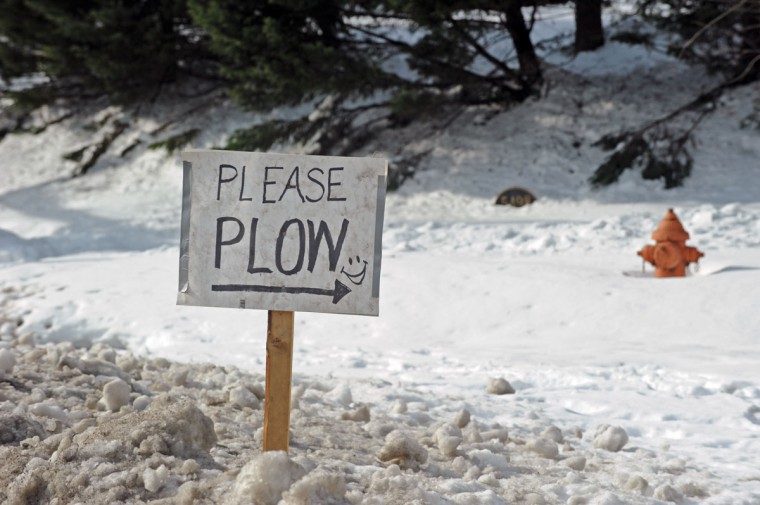 A “Please Plow” sign put up by Craig Kirby, a resident on Springlake Way and Northern Parkway, pleads for a plow truck to go down his street. (Kenneth K. Lam / Baltimore Sun) 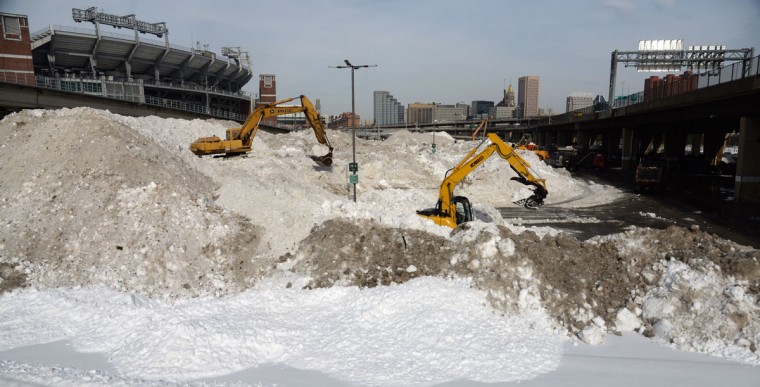 Excavators pile up snow brought in by dump trucks in a parking lot near M&T Bank Stadium. (Kim Hairston/Baltimore Sun) 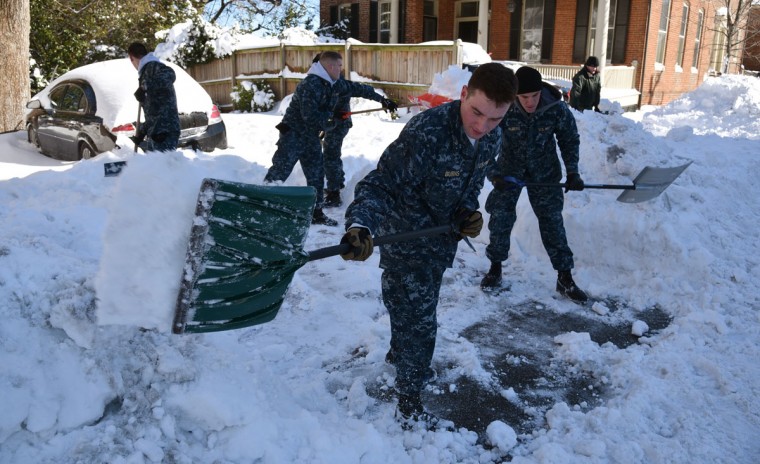 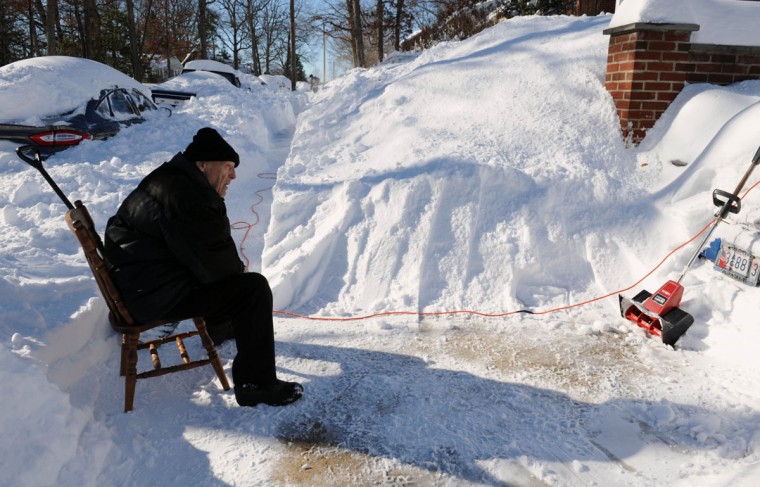 After many hours of shoveling with his power shovel, Mario Ciliotta takes a break on his clean sidewalk in the 700 block of Overbrook Road in the unplowed Anneslie neighborhood Sunday afternoon. (Karen Jackson / Baltimore Sun Media Group) 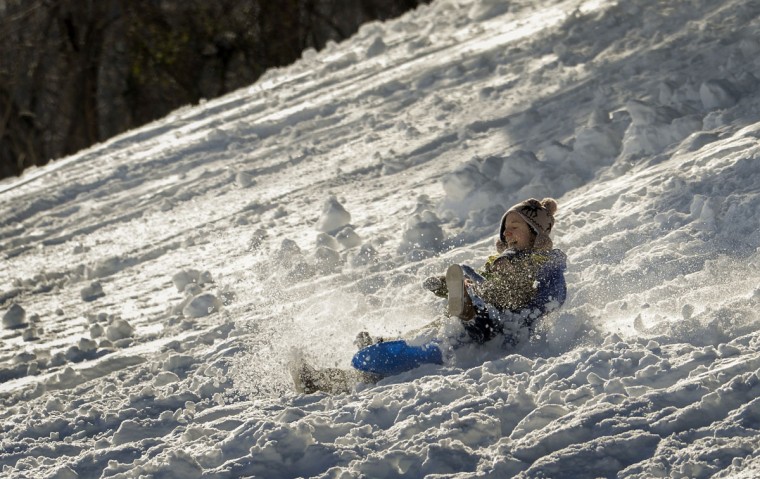 Amanda Ackerman and her three-year-old son, Michael Berardi slide down the steep hill at the Grand Pointe apartment complex in the Columbia village of Oakland Mills on Monday afternoon. They join many others enjoying the snow there in the wake of the Blizzard of 2016. (Doug Kapustin / Baltimore Sun Media Group) 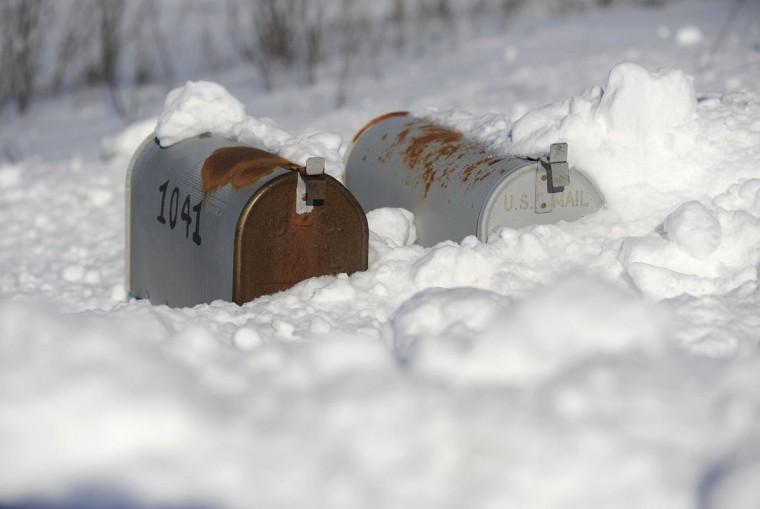 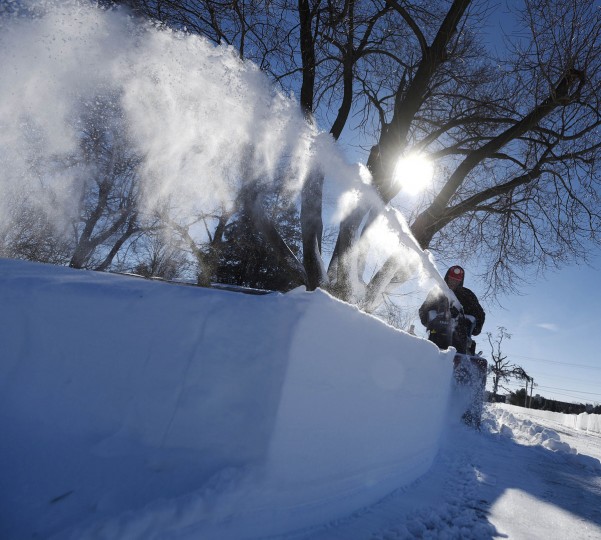 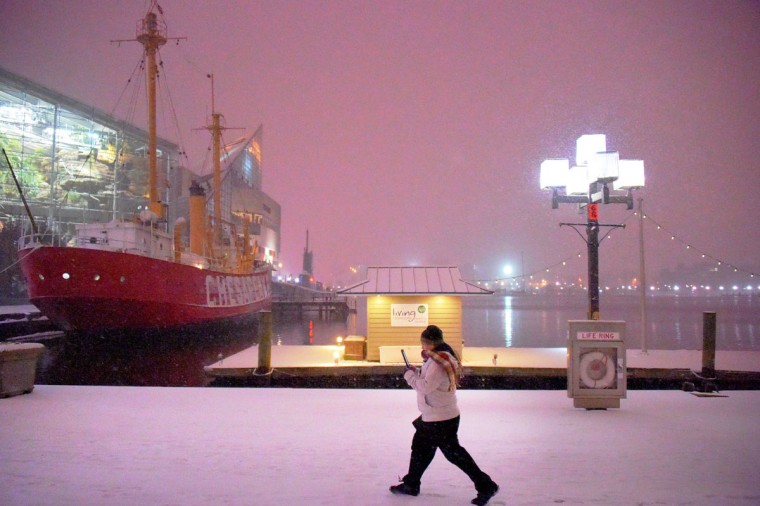 Andres Palestina of Baltimore walks at the Inner Harbor on his way home from work, taking photos as he walks past the ship Chesapeake while the East Coast is hit with a major blizzard this weekend. (Karl Merton Ferron / Baltimore Sun) 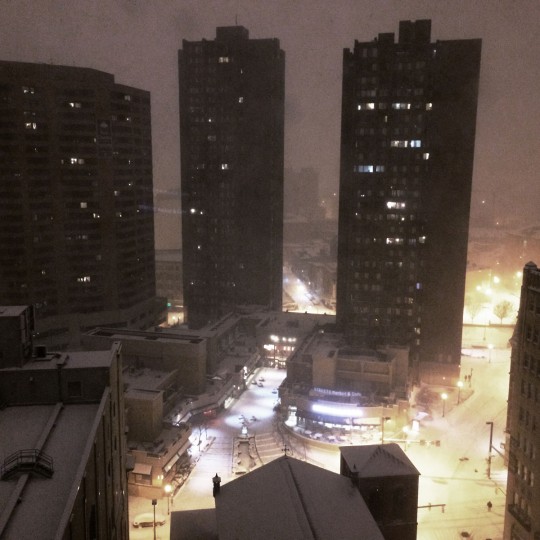 The Charles Towers and the intersection of E. Saratoga and N. Charles Streets in Baltimore are pictured as the blizzard blows through just after midnight on Jan. 23, 2016. Seen from the 23rd floor of the Embassy Suites. (Christopher T. Assaf/Baltimore Sun) 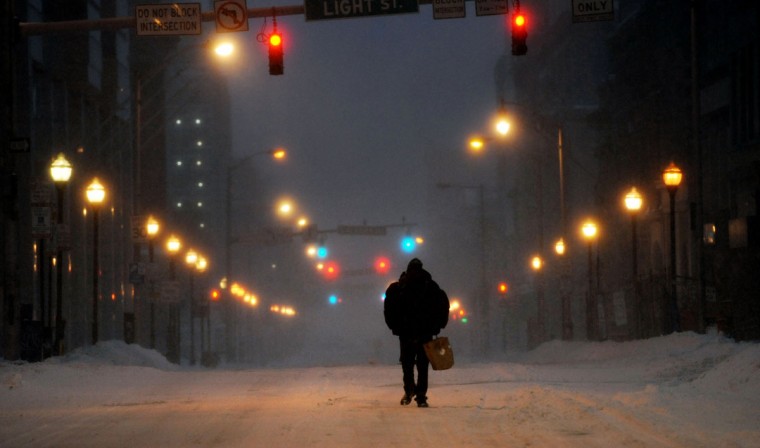 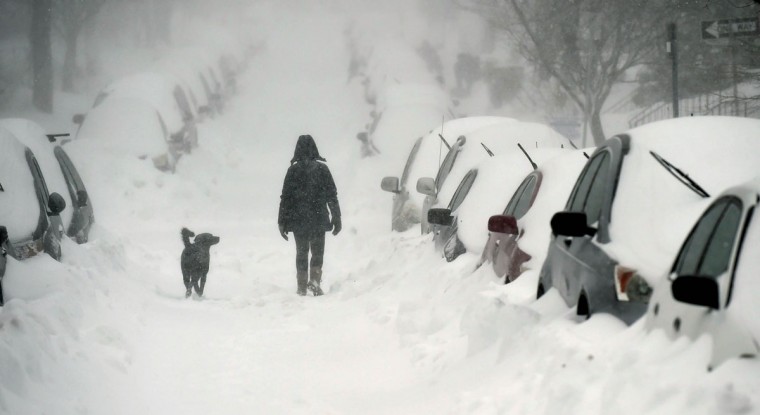 A dog and his owner walk down a snow-covered Hopkins Road in Rodgers Forge Saturday morning. (Jerry Jackson/Baltimore Sun) 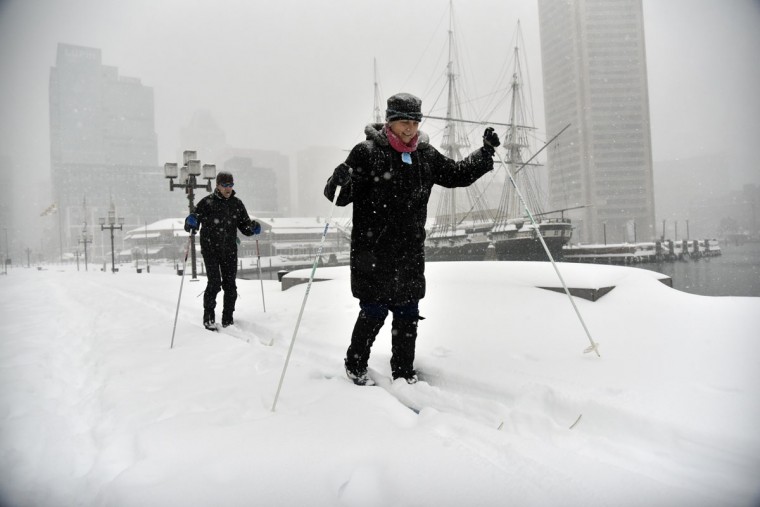 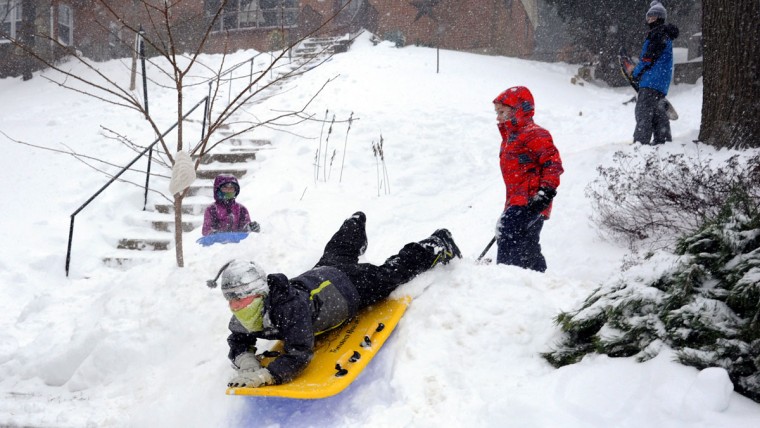 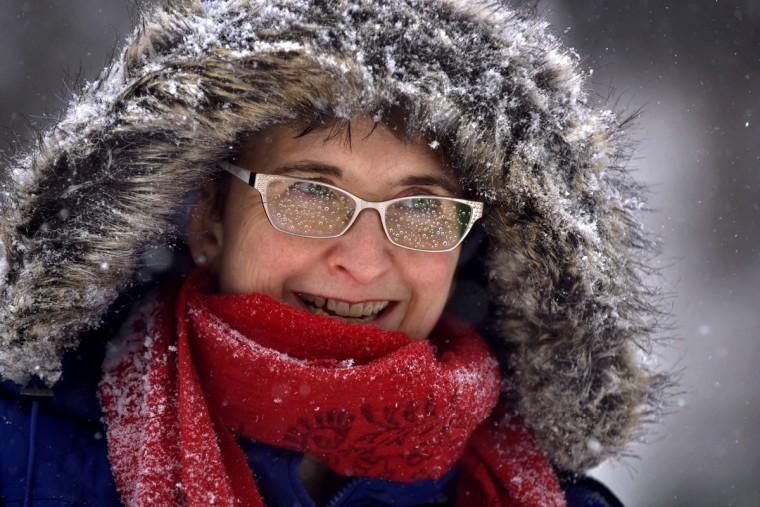 Driving snow melts on Stasia Edmonston’s glasses as she walks her dog in the Anneslie neighborhood in Towson as the blizzard squawked loudly through the region. (Algerina Perna / Baltimore Sun)