Thirty years ago today the Challenger Space Shuttle rocketed into the sky aimed at history.

On board were six astronauts and a teacher, bound to prove that with training, any American could dream of helping explore beyond our world. But as the Challenger rocketed into the sky disaster struck. The moment of human achievement lasted 73 seconds before it became human tragedy.

That night, instead of giving the State of the Union Address, President Ronald Reagan spoke to a grieving nation. Several quotes from that speech have been echoed over the past three decades, but perhaps one that might best capture the spirit of the crew is this one: “The future doesn’t belong to the fainthearted; it belongs to the brave.” 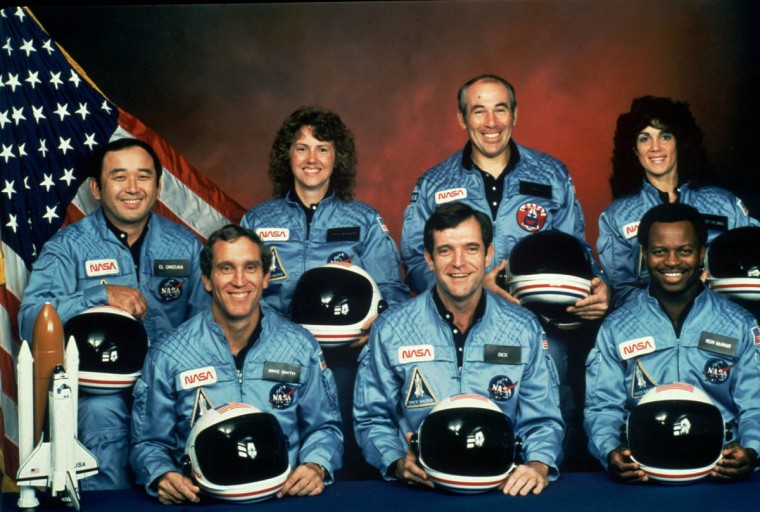 This photo provided by NASA shows the crew of the Space Shuttle Challenger mission 51L. All seven members of the crew were killed when the shuttle exploded during launch on Jan. 28, 1986. Front row from left are Michael J. Smith, Francis R. (Dick) Scobee, and Ronald E. McNair. Front row from left are Ellison Onizuka, Christa McAuliffe, Gregory Jarvis, and Judith Resnik. (NASA via AP) 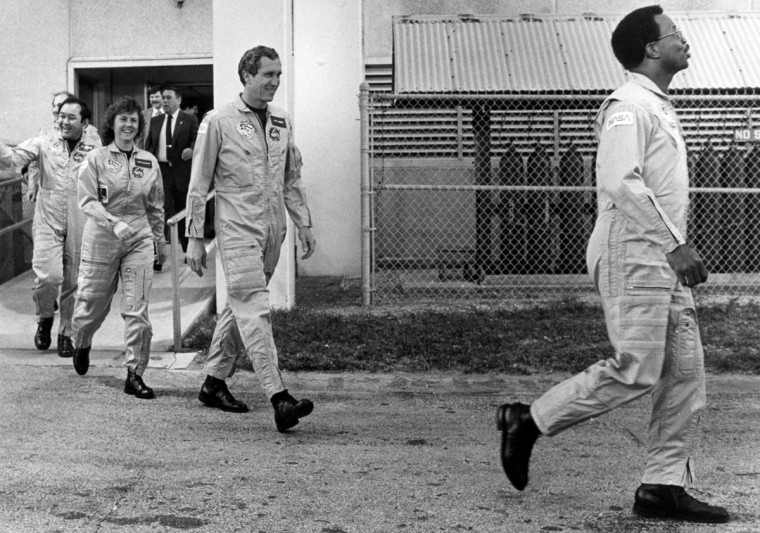 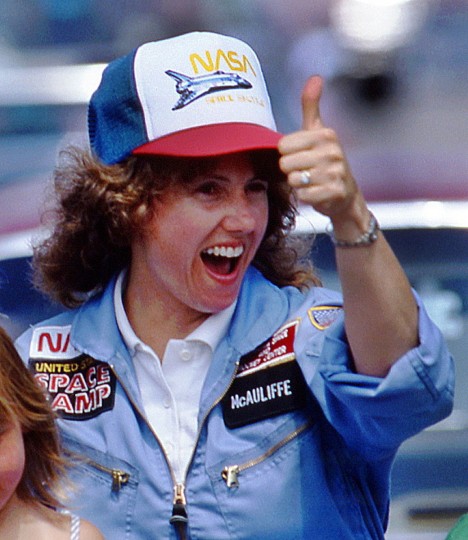 In this 1985 photo, high school teacher Christa McAuliffe gives a thumbs-up during a parade down Main Street in Concord, N.H. McAuliffe was one of seven crew members killed in the Space Shuttle Challenger explosion on Jan. 28, 1986. (AP Photo/Jim Cole)

In this series of Jan. 28, 1986 photos, the space shuttle Challenger explodes shortly after lifting off from the Kennedy Space Center in Cape Canaveral, Fla. A family from Michigan watches the explosion from Shepard Park in Cocoa Beach. (Malcolm Denemark/Florida Today via AP) 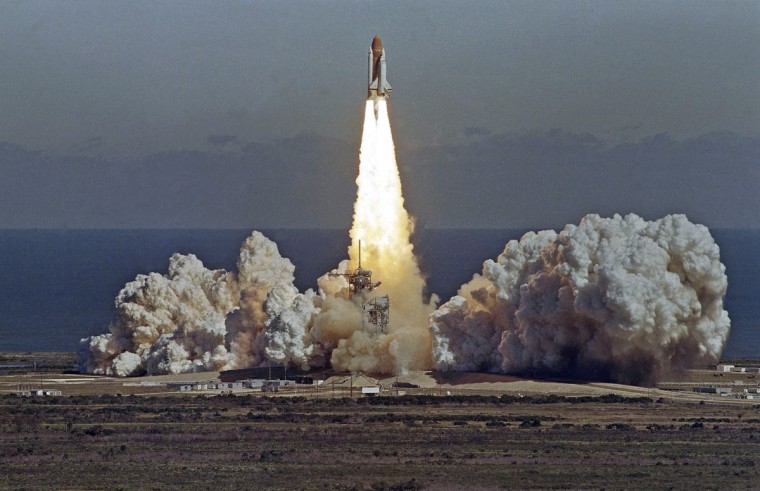 In this Jan. 28, 1986 picture, the space shuttle Challenger lifts off from the Kennedy Space Center in Cape Canaveral, Fla. shortly before it exploded with a crew of seven aboard. (AP Photo/Thom Baur) 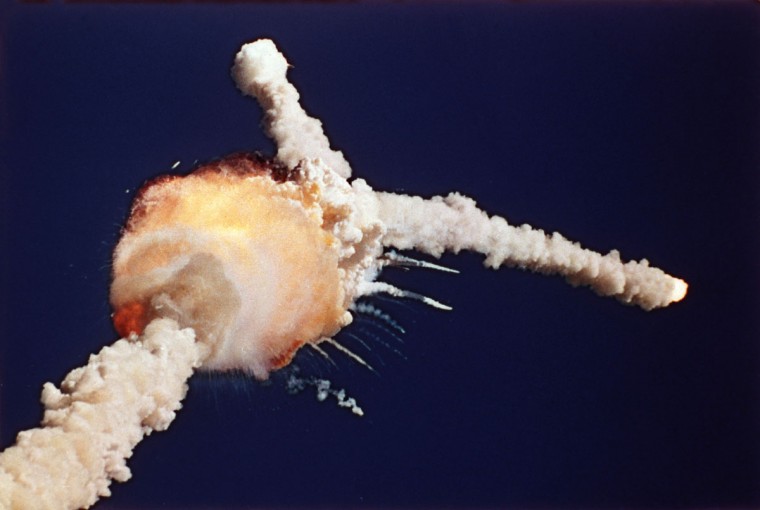 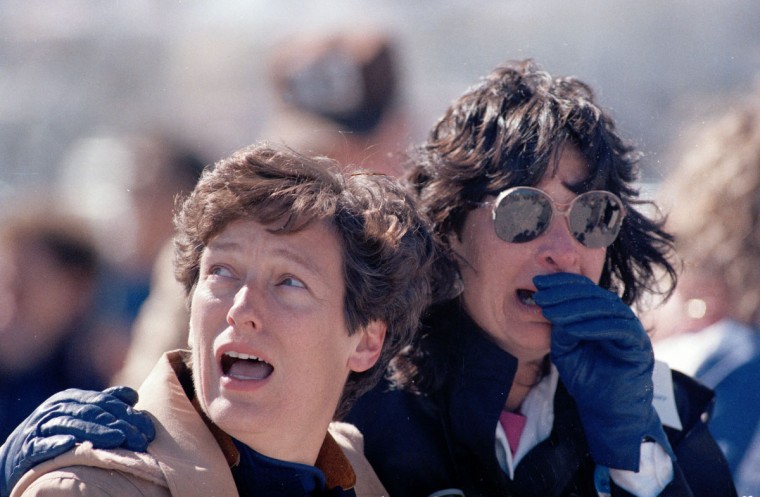 In this Jan. 28, 1986 file picture, spectators at the Kennedy Space Center in Cape Canaveral, Fla. react after they witnessed the explosion of the space shuttle Challenger. (AP Photo/File) 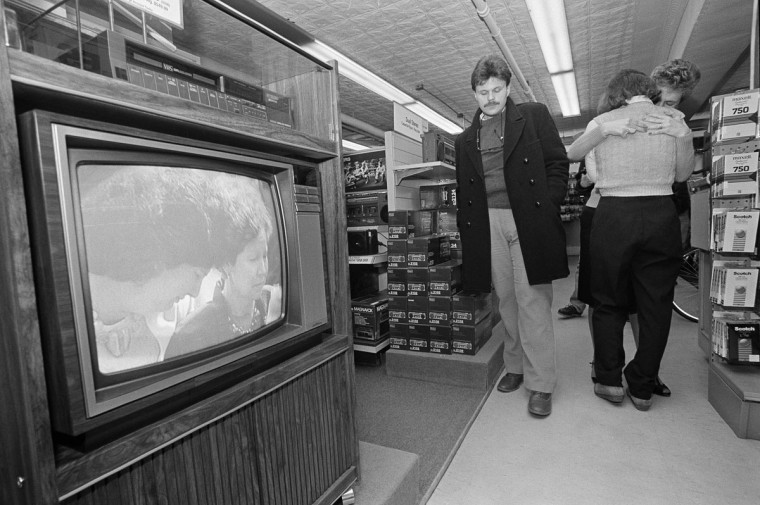 In this Friday, Feb. 1, 1986 file photo, customer David Kimball of Manchester, N.H. reacts as store employees Lynne Beck of Salisbury, N.H. and Lisa Olson, far right, of Manchester, N.H., embrace each other as they watch the Houston memorial service for the astronauts who died in the space shuttle Challenger explosion on a television in a store in Concord, N.H. Pictured on the television screen are family members of one of the astronauts. (AP Photo/Charles Krupa) 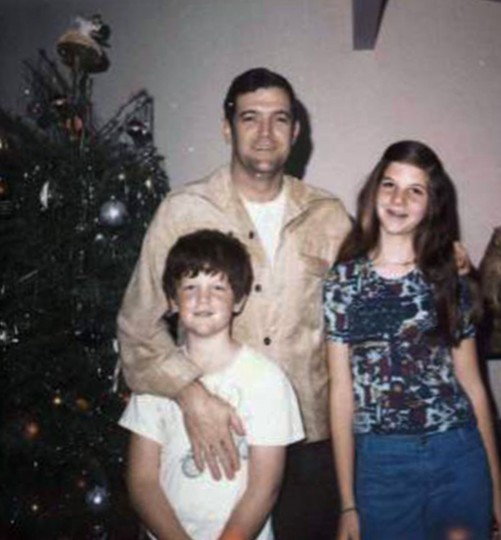 This Dec. 25, 1972 photo provided by June Scobee Rodgers shows her late husband, Dick Scobee and their children, and Rich and Kathie. On the 30th anniversary of the space shuttle Challenger accident, June Scobee Rodgers, longtime spokeswoman for the families of the lost astronauts is passing the torch to daughter Kathie Scobee Fulgham. Fulgham, not Rodgers, will be on the speaker platform for the ceremony on Thursday, Jan. 28, 2016. (Courtesy June Scobee Rodgers via AP) 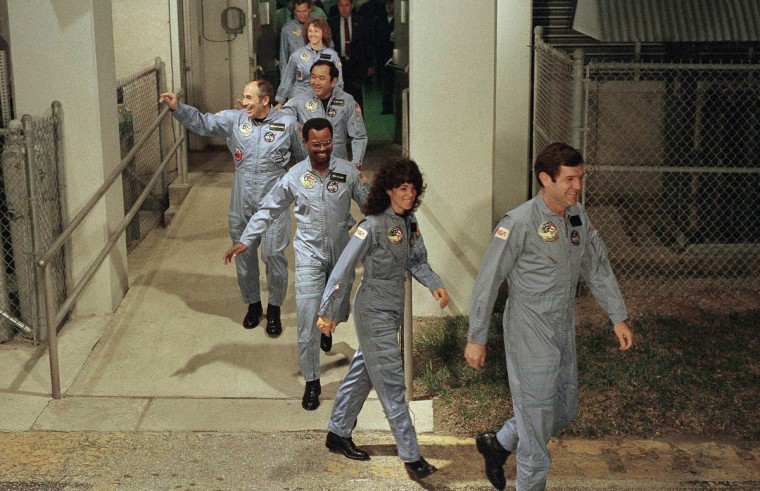 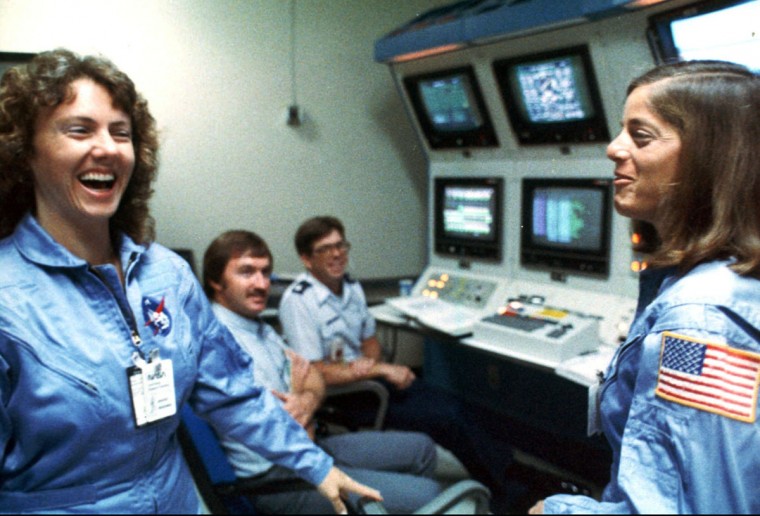 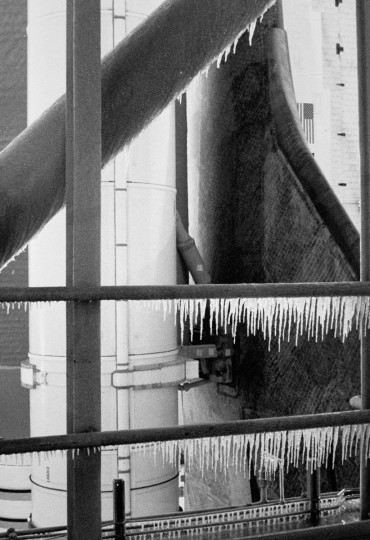 This Jan. 28, 1986 photo provided by NASA shows icicles on hand rails of the space shuttle Challenger’s service structure on the morning of its final launch from Kennedy Space Center, Fla. The cold weather affected O-ring seals on a solid rocket booster, causing the explosion during launch. (AP Photo/NASA) 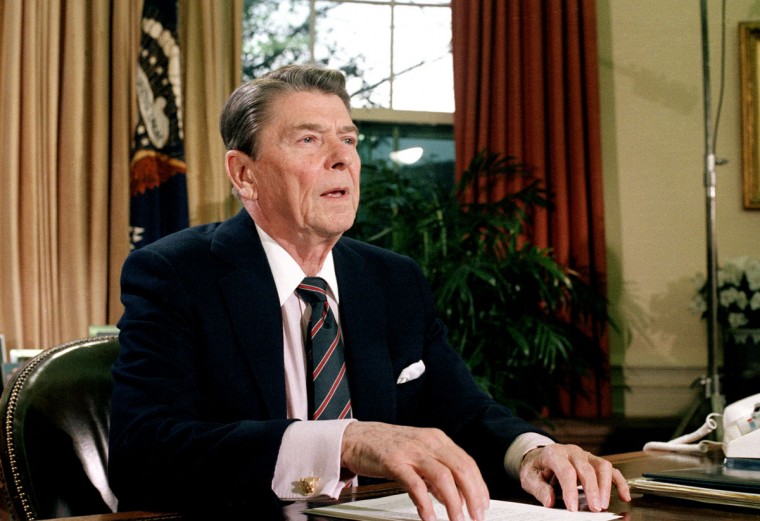 This Jan. 28, 1986 file picture shows U.S. President Ronald Reagan in the Oval Office of the White House after a televised address to the nation about the space shuttle Challenger explosion. (AP Photo/Dennis Cook) 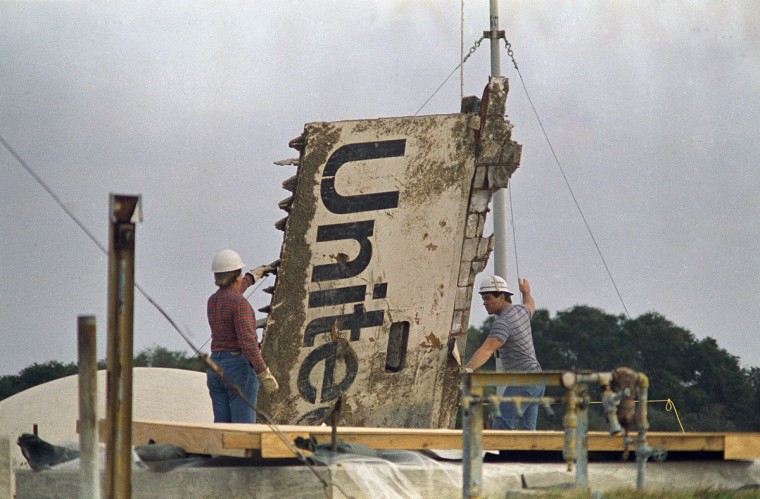 In this 1986 file photo, workers transport debris from the space shuttle Challenger, recovered after the Jan. 28, 1986 explosion, to a storage site on the Canaveral Air Force Station in Cape Canaveral, Fla. (AP Photo/James Neihouse) 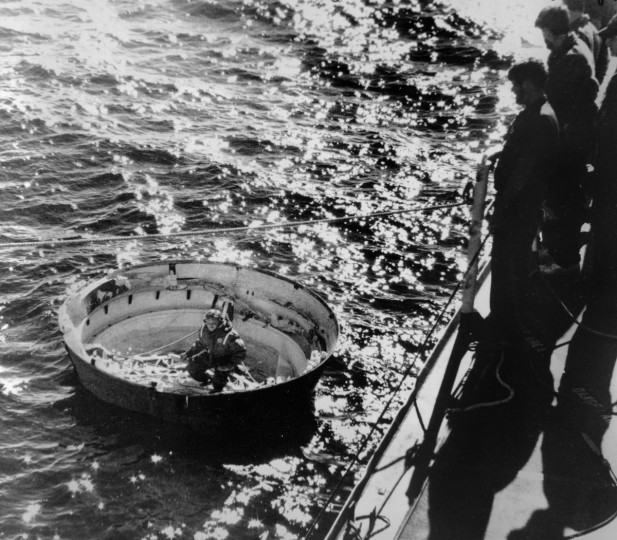 In this Jan. 31, 1986 file photo, Coast Guardsmen prepare to hoist the fulcrum of one of the space shuttle Challenger’s solid rocket boosters onto the deck of U.S. Coast Guard cutter Dallas during salvage operations off the Florida coast. The Challenger exploded shortly after takeoff on Jan. 28. (AP Photo/File) 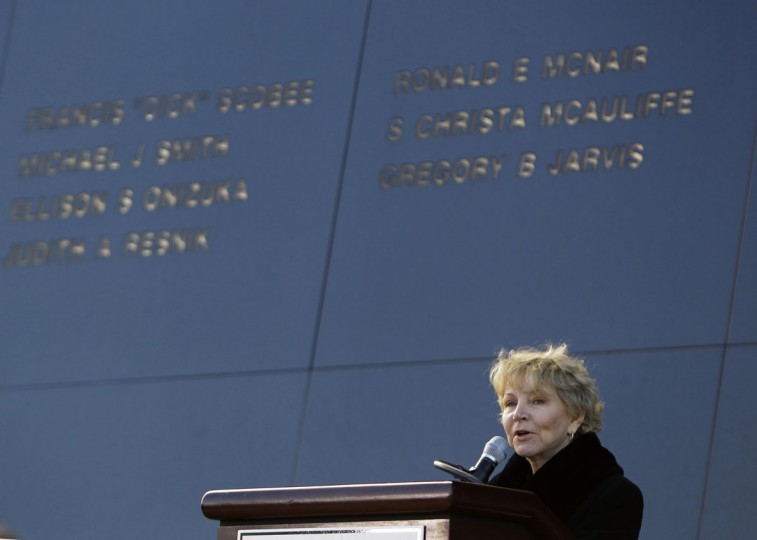 In this Friday, Jan. 28, 2011 file photo, June Scobee Rodgers, widow of Dick Scobee, commander of space shuttle Challenger, speaks in front of the Space Mirror Memorial during a remembrance ceremony to mark the 25th Anniversary of space shuttle Challenger at the Kennedy Space Center visitor complex in Cape Canaveral, Fla. On the memorial behind her are the names of the astronauts that perished aboard Challenger. (AP Photo/John Raoux) 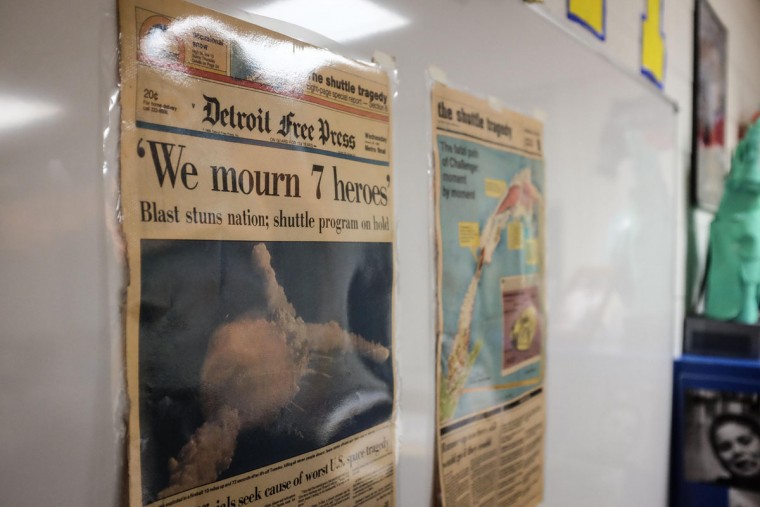 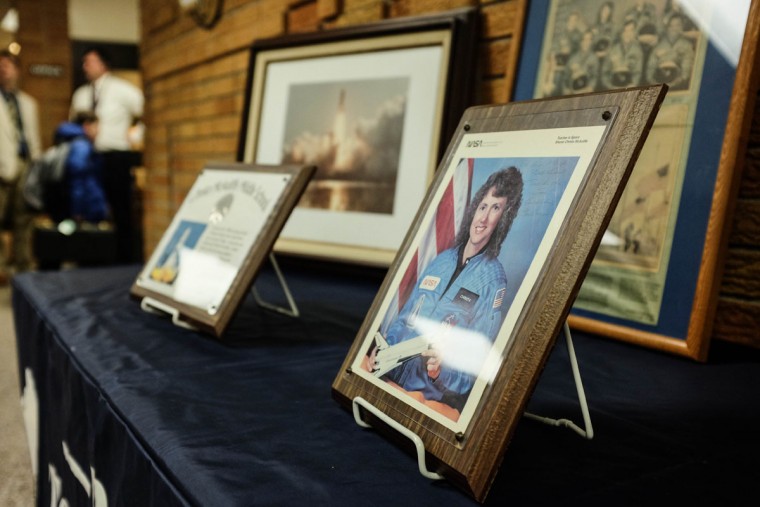 A display in the lobby of Christa McAuliffe Middle School in Bay County’s Bangor Township, Mich., Thursday, Jan. 28, 2016, honors the teacher-astronaut who died in the Challenger explosion 30 years ago. (Andrew Dodson/The Bay City Times via AP) 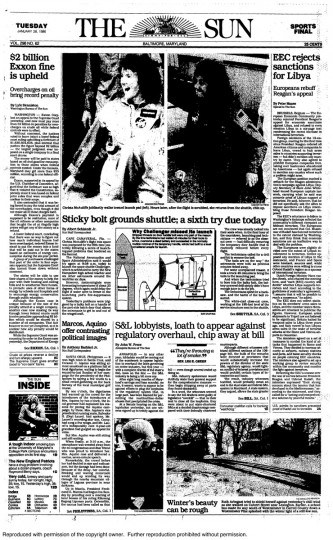 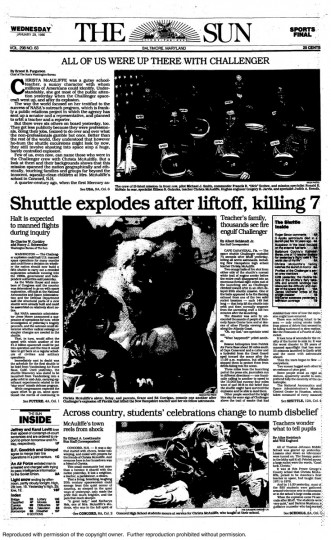 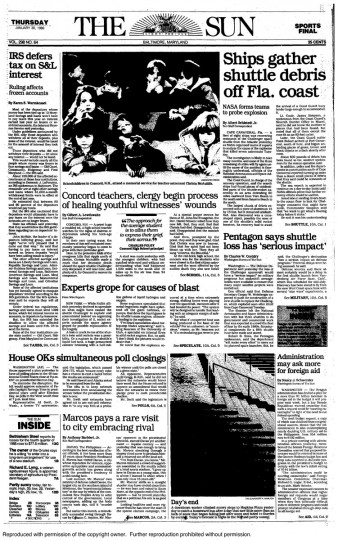 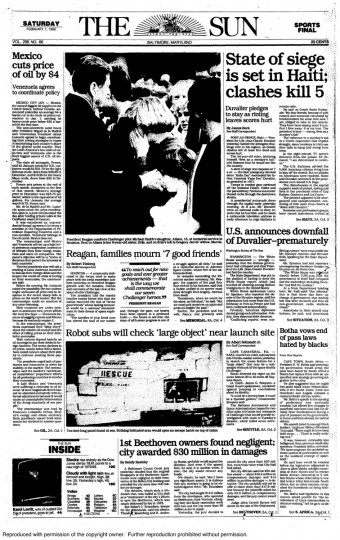