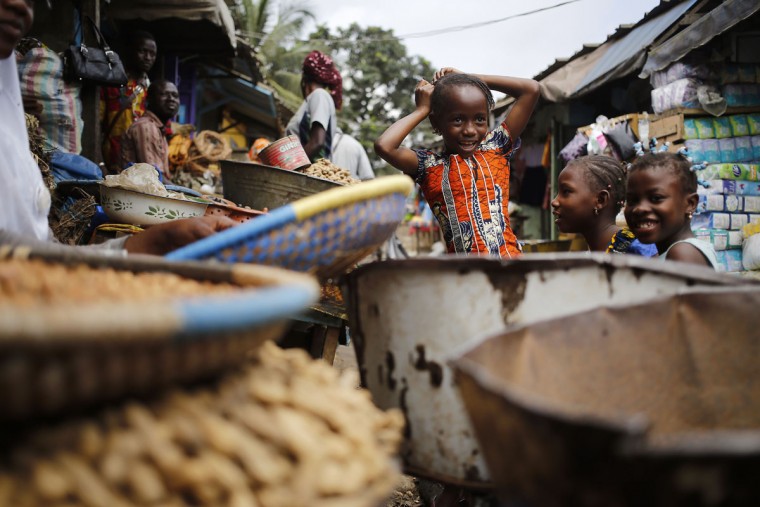 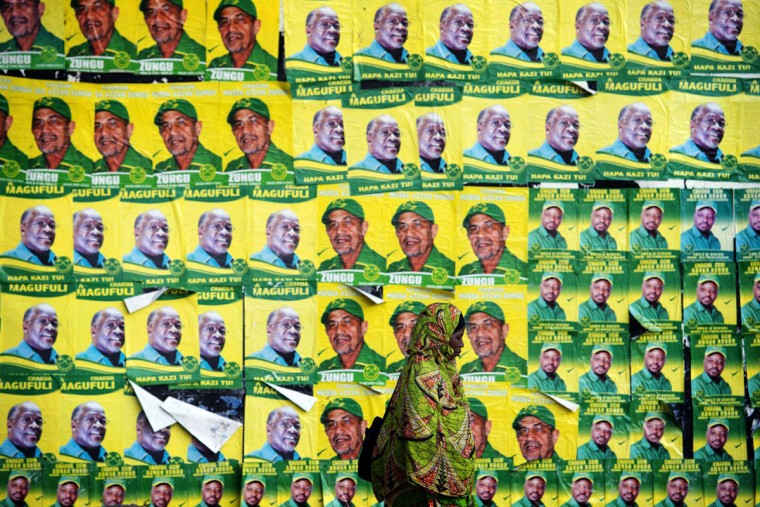 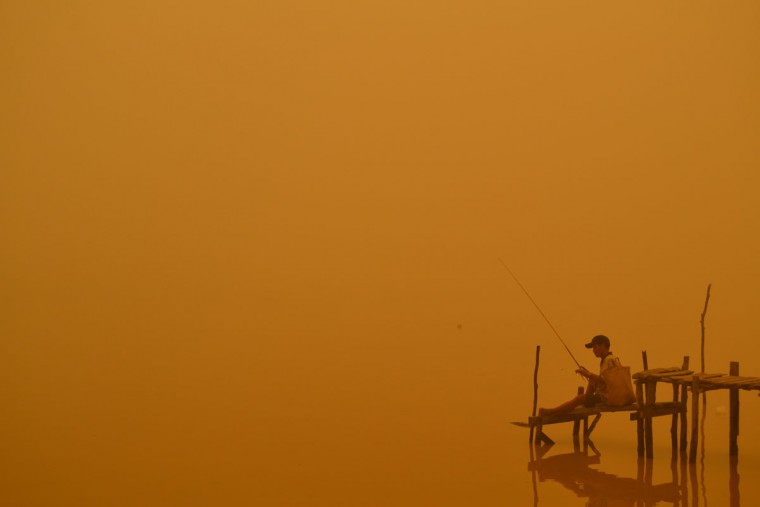 A resident fishes by the river in Palangkaraya city, one of worst-hit by haze in central Kalimantan province, on October 21, 2015. Indonesian forest and agricultural fires cloaking Southeast Asia in acrid haze are spewing more greenhouse gases into the atmosphere each day than all US economic activity, according to an environmental watchdog. (AFP Photo/Haris Sadikin) 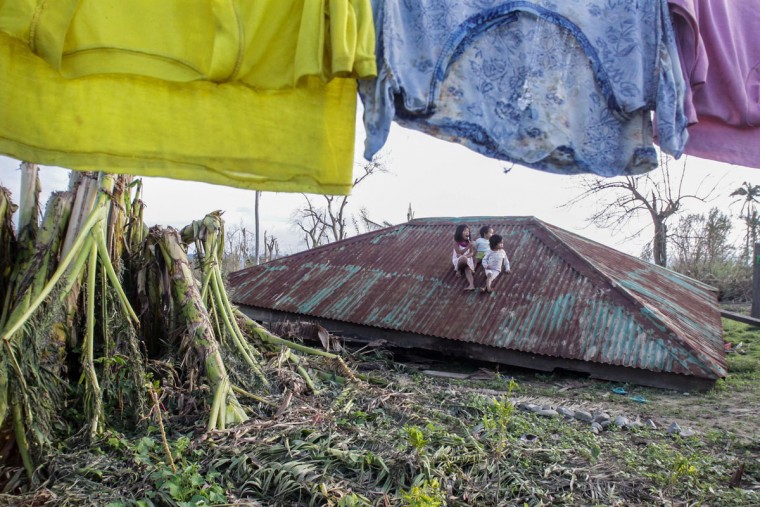 Children sit on the roof of a house blown over by typhoon Koppu in Casiguran town, Auroran province northeast of Manila on October 21, 2015, days after the typhoon devastated the province. Widespread flooding in the Philippines caused by a powerful typhoon eased on October 21 but the storm’s death toll climbed to 47 and tens of thousands of people remained in evacuation centres. (AFP Photo/Dante Diosina jr) 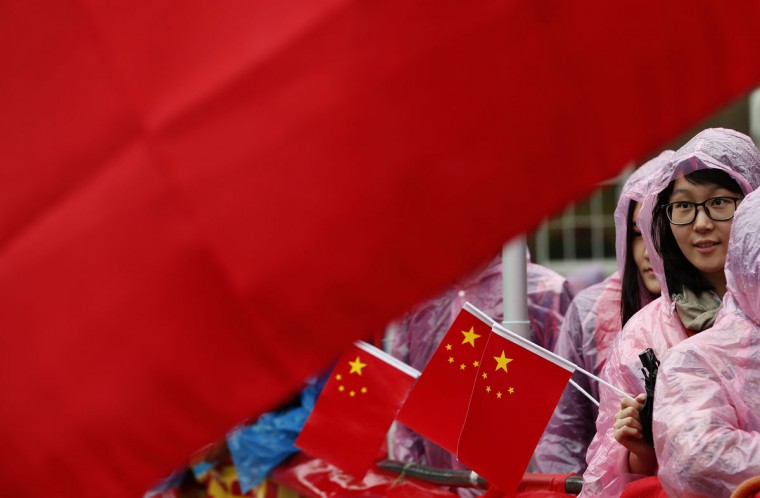 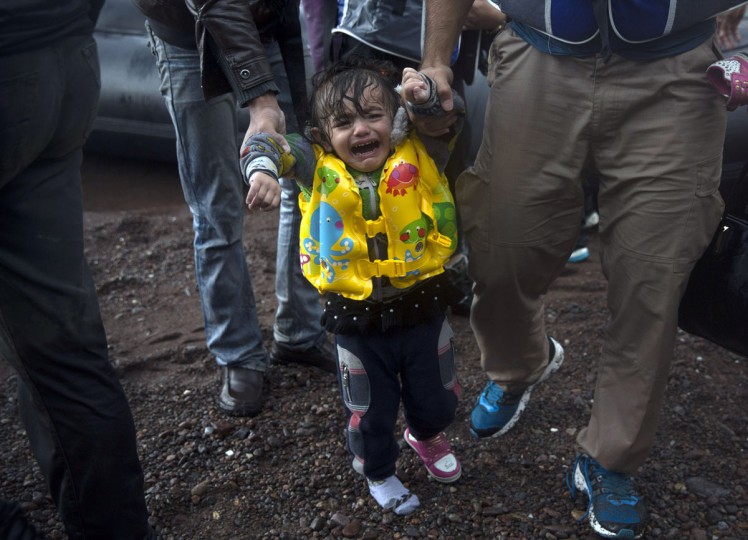 A young girl with a lost shoe cries after her arrival on a dinghy with her family from the Turkish coast to Skala Sikaminias village on the northeastern Greek island of Lesbos, Wednesday, Oct. 21, 2015. Greece is the main entry point for those fleeing violence at home and seeking a better life in the European Union. More than 500,000 people have arrived so far this year on Greece’s eastern islands, paying smugglers to ferry them across from nearby Turkey. (AP Photo/Santi Palacios) 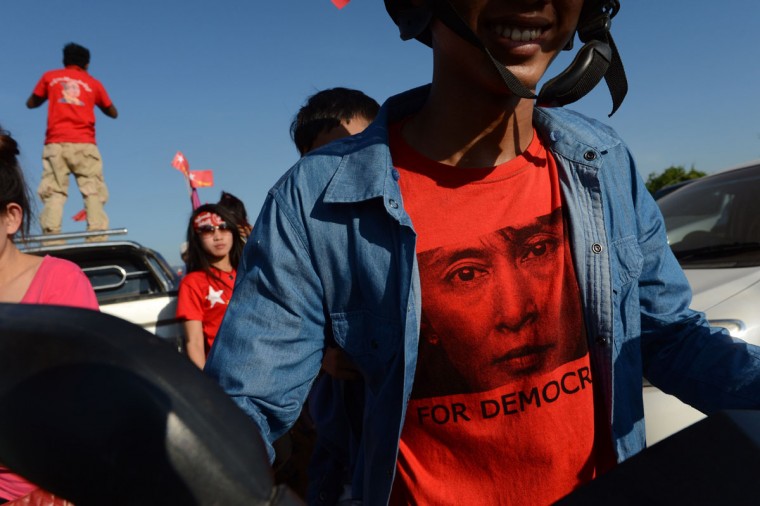 Supporters of Myanmar opposition leader Aung San Suu Kyi arrive at the National League for Democracy (NLD) campaign rally attended by thousands of supporters and Shan ethnic minorities at Tachileik in Shan State on October 21, 2015. European Union observers will be given access to voting on military bases for next month’s Myanmar election, an official said, a move to bolster oversight of a poll billed as the country’s fairest in decades. (AFP Photo/Romeo Gacad) 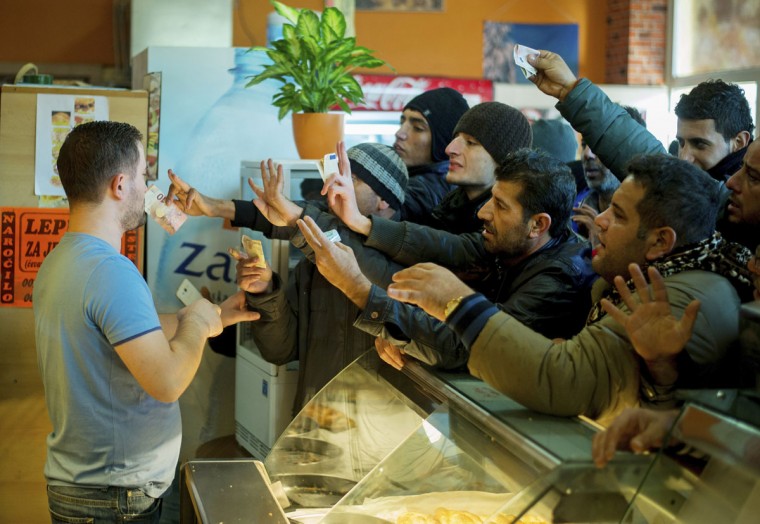 Migrants try to buy some food at a takeaway after they crossed the Austrian-Slovenian border in Spielfeld, Austria, Wednesday, Oct 21, 2015. Thousands of people are trying to reach central and northern Europe via the Balkans but often have to wait for days in mud and rain at the Serbian, Croatian and Slovenian borders. (AP Photo/Christian Bruna) 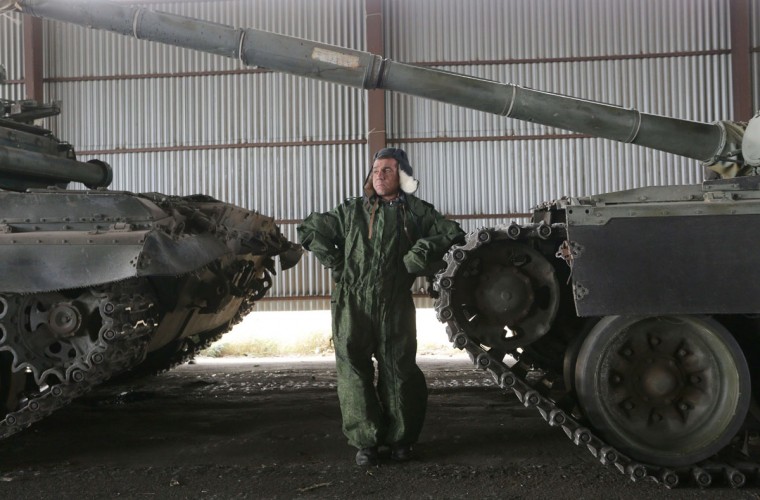 A pro-Russian separatists soldiers stands next to T-72 battle tanks parked in a warehouse away from the frontline, after being withdrawn from their positions near the town of Novoazovsk in the Donetsk region on October 21, 2015. Ukrainian forces and pro-Russian insurgents said today they had begun withdrawing tanks and smaller weapons from the front line in the devastated Donetsk region in the ex-Soviet state’s eastern war zone. (AFP Photo/Aleksey Filippov) 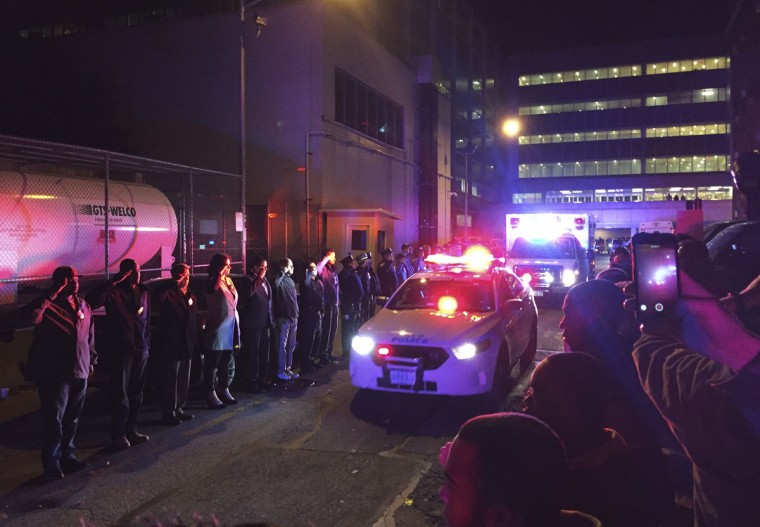 Police salute outside Harlem Hospital Center as the body of New York Police Department Officer Randolph Holder passes by in an ambulance, early Wednesday, Oc. 21, 2015, in New York. Holder, 33, died after being shot in the head in a gun battle Tuesday while pursuing a suspect following a report of shots fired, police said. (AP Photo/Michael Balsamo) 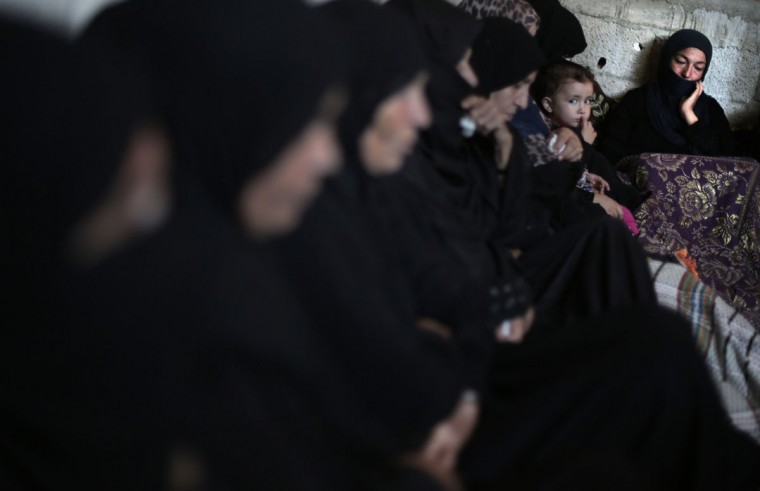 Palestinian women mourn at the family house of Ahmed Al-Serhi, 27, who was killed during clashes with Israeli troops near the Israeli border with Gaza, during his funeral in Deir el-Balah, in the central Gaza Strip, Wednesday, Oct. 21, 2015. (AP Photo/ Khalil Hamra) 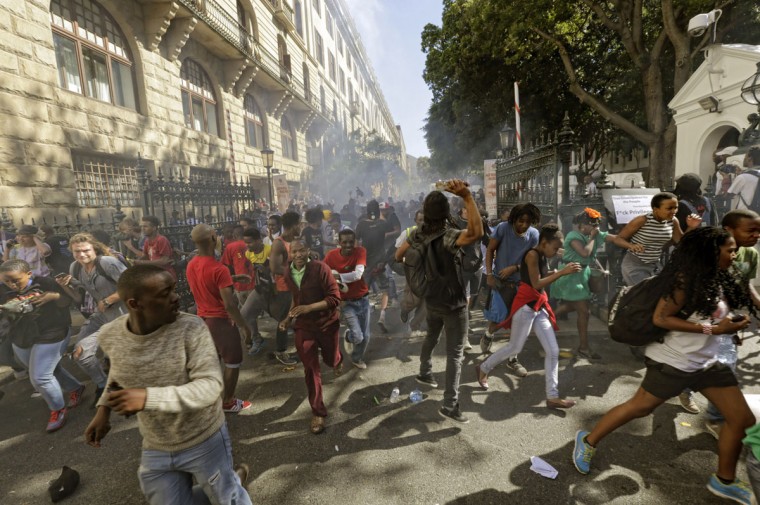 Protesting university students flee as police fire stun grenades outside Parliament in Cape Town, South Africa, Wednesday Oct. 21, 2015. The protests are part of a wave of nationwide protests that have shut down many South Africa universities, which say they are struggling with higher operational costs as well as inadequate state subsidies. (AP Photo) 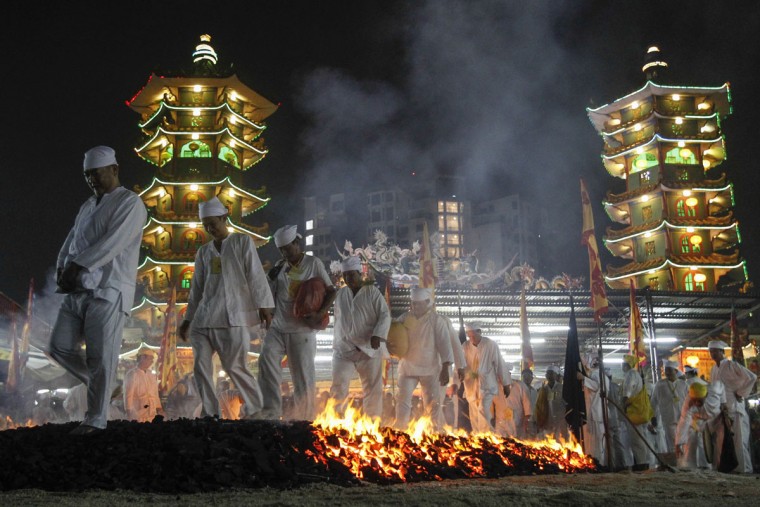 Malaysian ethnic Chinese men walk barefoot on a bed of burning coals on the final day of the Nine Emperor Gods festival at a temple in Kuala Lumpur, Malaysia, Wednesday, Oct. 21, 2015. The men have abstained from meat for the past nine days in order to purify their bodies in preparation for this ritual, in which women are barred from participating. (AP Photo/Joshua Paul) 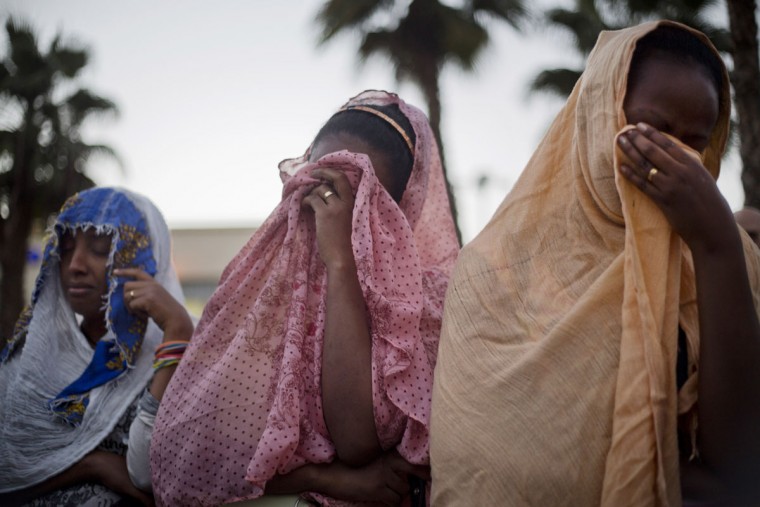 Eritrean migrants women mourn during a memorial gathering for Habtom Zerhom, in Tel Aviv, Israel, Wednesday, Oct. 21, 2015. Zarhum died of his wounds after an Israeli security guard fired at him and later was beaten by a mob that mistakenly believed he was a Palestinian attacker during a shooting in the southern city of Beersheba on Sunday. Israeli security officials said a 21-year-old Arab Israeli carried out the attack, killing an Israeli soldier and wounding 10 people. (AP Photo/Ariel Schalit) 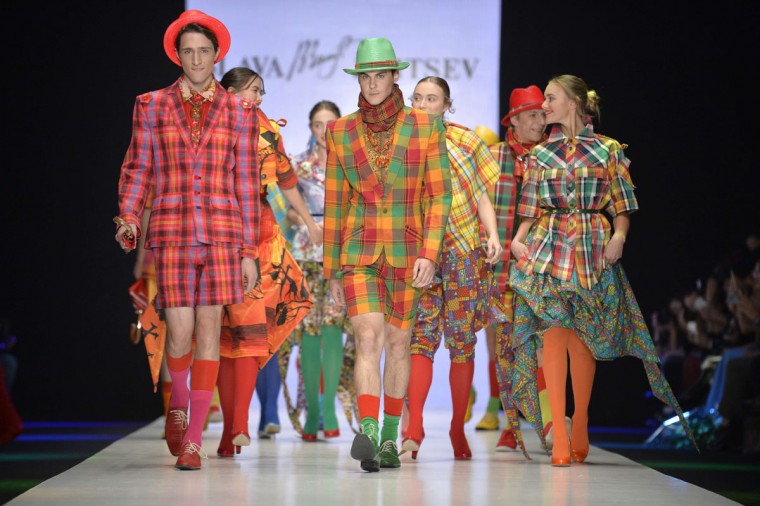 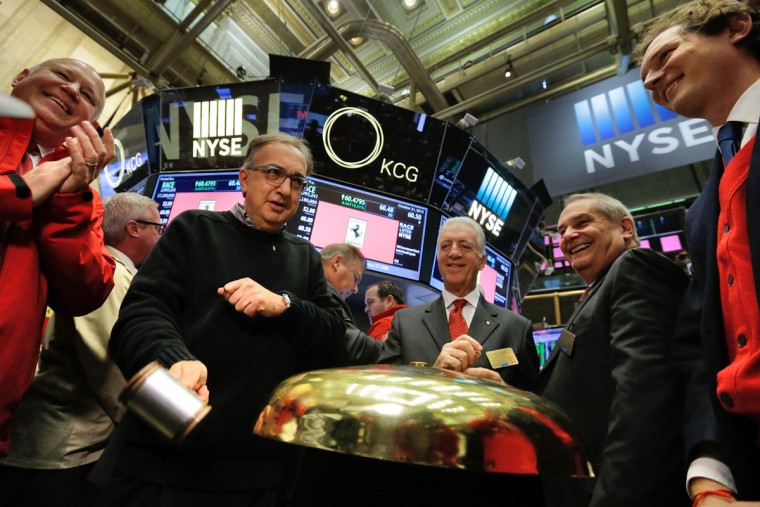 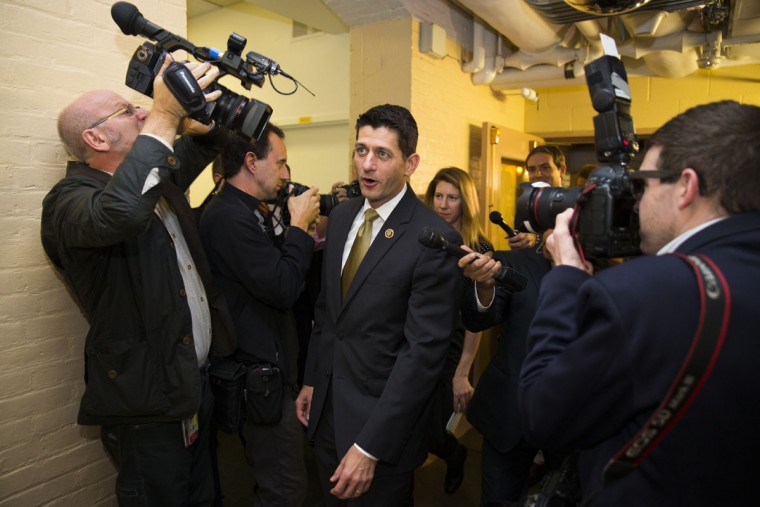 Rep. Paul Ryan, R-Wis., is surrounded by media as he arrives for a House GOP conference meeting in Capitol Hill in Washington, Wednesday, Oct. 21, 2015. Ryan is seeking unity in a place it’s rarely found, telling House Republicans he will serve as their speaker only if they embrace him by week’s end as their consensus candidate. (AP Photo/Evan Vucci) 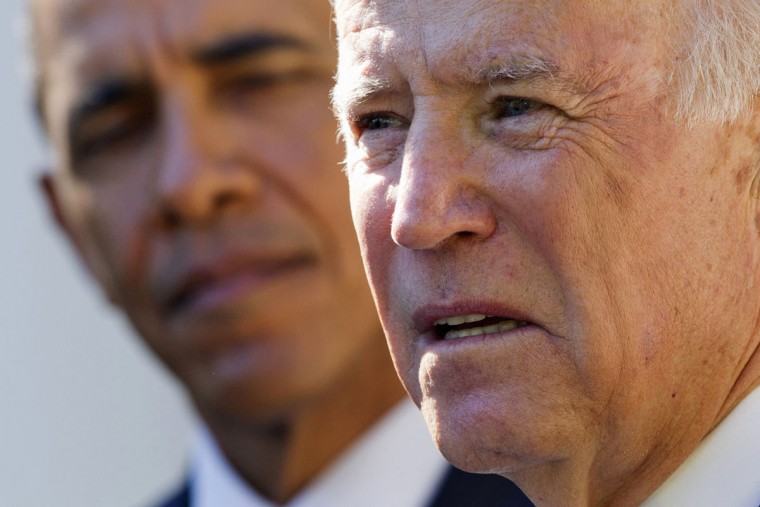 President Barack Obama listens as Vice President Joe Biden speaks in the Rose Garden of the White House in Washington, Wednesday, Oct. 21, 2015, to announce that he will not run for the presidential nomination. (AP Photo/Jacquelyn Martin) 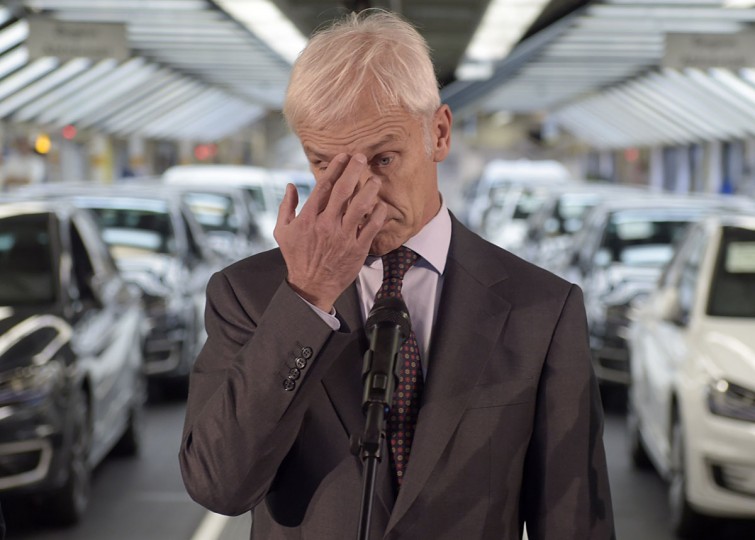 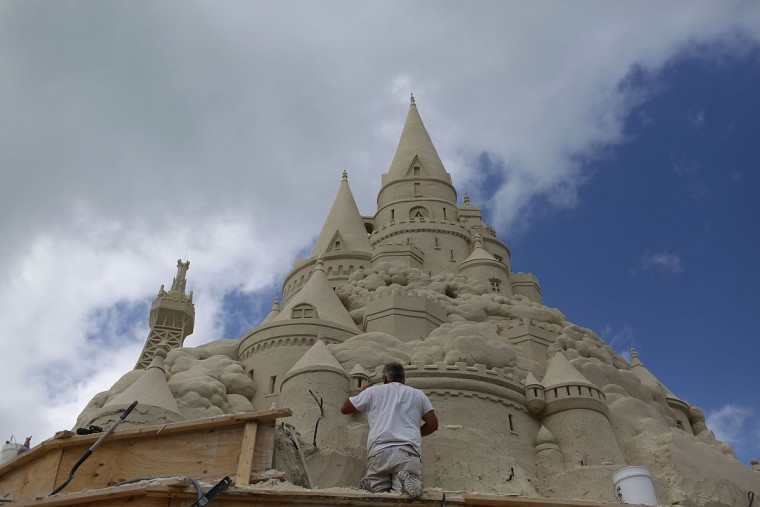 Sand sculptor, Ted Seibert, works on creating what is hoped to be the world’s tallest sand castle when it is completed at the Virginia Key Beach on October 20, 2015 in Key Biscayne, Florida. The Turkish Airlines is sponsoring the castle that is being built by the Sand Sculpture co., the sculptors will use about 1,800 tons of sand in their attempt to beat the current world record of 41 feet and 3.67 inches. (Photo by Joe Raedle/Getty Images)