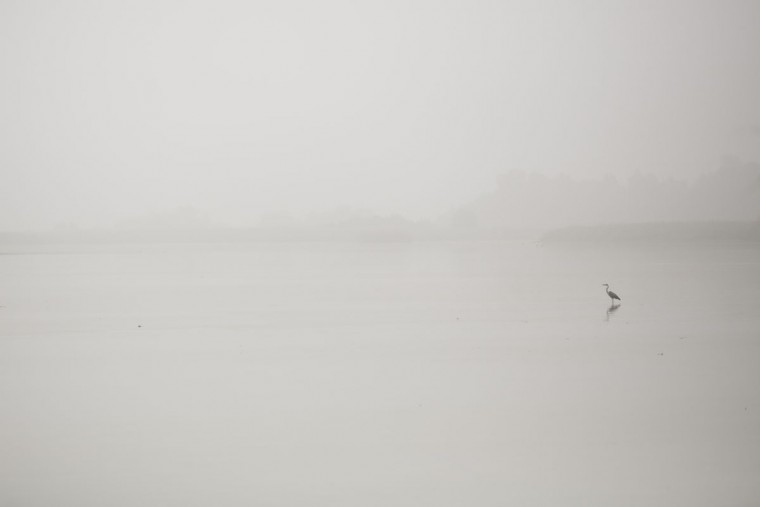 A grey heron stands in the water as an unseasonal sandstorm cover the Hula Lake conservation area, north of the Sea of Galilee, in northern Israel, Wednesday, Sept. 9, 2015. The unseasonal sandstorm has swept across the Mideast, blanketing Beirut, Cairo and Damascus and causing the deaths of at least five people and sending hundreds of others to hospitals with breathing problems. (AP Photo/Ariel Schalit) 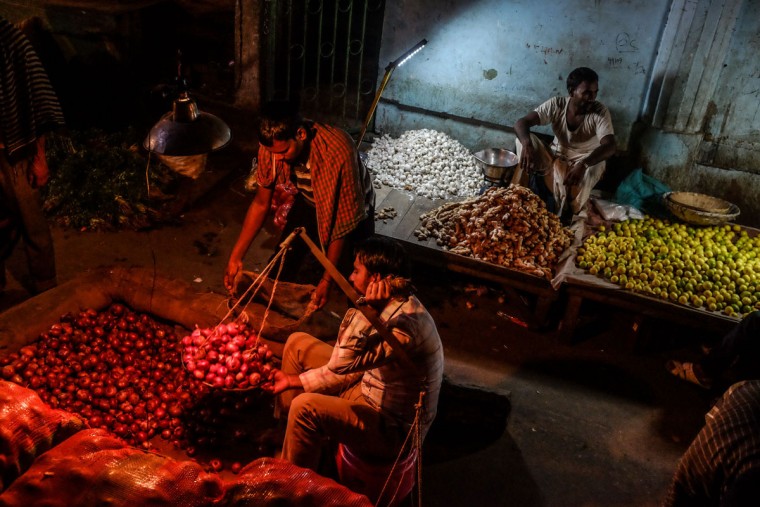 An Indian seller weighs a measure of onions on a hand-held scale (L) at a local market in south New Delhi on September 9, 2015. The cost of India’s staple vegetable — an essential ingredient in curries and eaten daily by almost everyone — soared in August to an eyewatering 60 rupees (90 US cents) a kilo on wholesale markets, up from 25 rupees in June. (AFP Photo/ Roberto Schmidt) 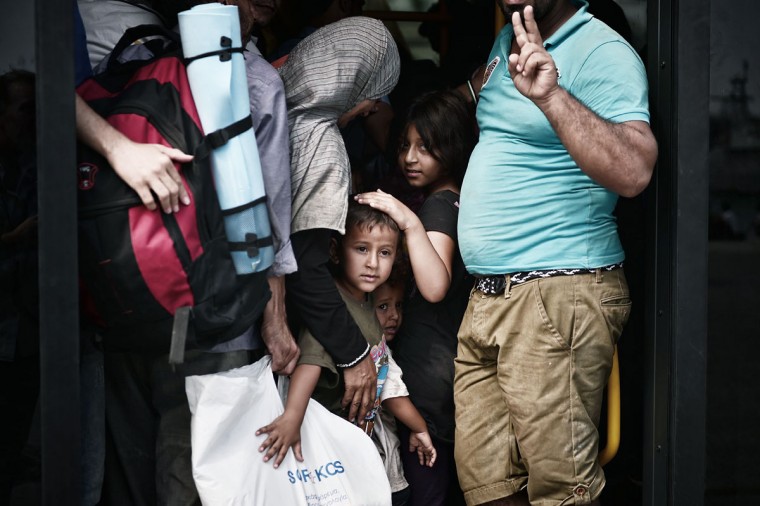 Children peer out from an overcrowded bus after disembarking with other migrants and refugees from the Greek government chartered Eleftherios Venizelos ferry in the port of Piraeus on September 9, 2015. Thousands of refugees arrived to Piraeus from the overcrowdedGreek islands, especially the island of Lesbos, in the last two days. EU Commission chief Jean-Claude Juncker unveiled major plans Wednesday to force the bloc to share 160,000 refugees and ease the pressure on border states from the worst migration crisis since World War II. (AFP Photo/Louisa Gouliamaki) 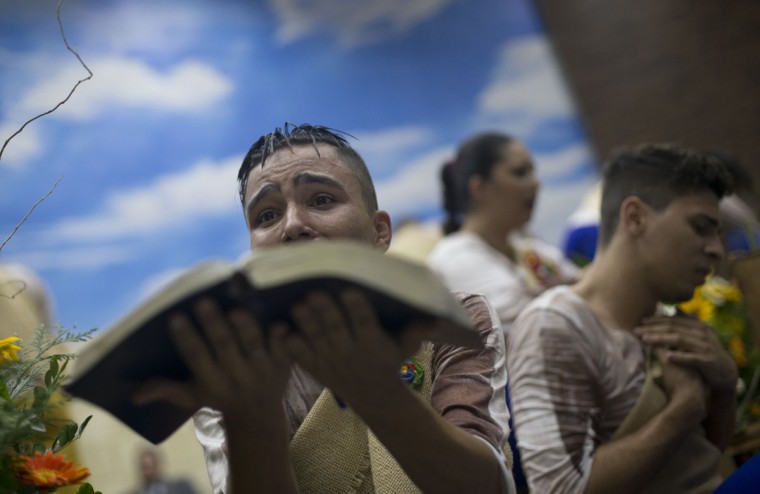 A young devotee performs while holding a Bible during a service at the Contemporary Christian Church in Rio de Janeiro, Brazil, Monday, Sept. 7, 2015. At the Contemporary Christian Church, which on Monday celebrated its ninth anniversary and the opening of its ninth branch with a raucous, theatrical service, homosexuality is celebrated rather than stigmatized. (AP Photo/Silvia Izquierdo) 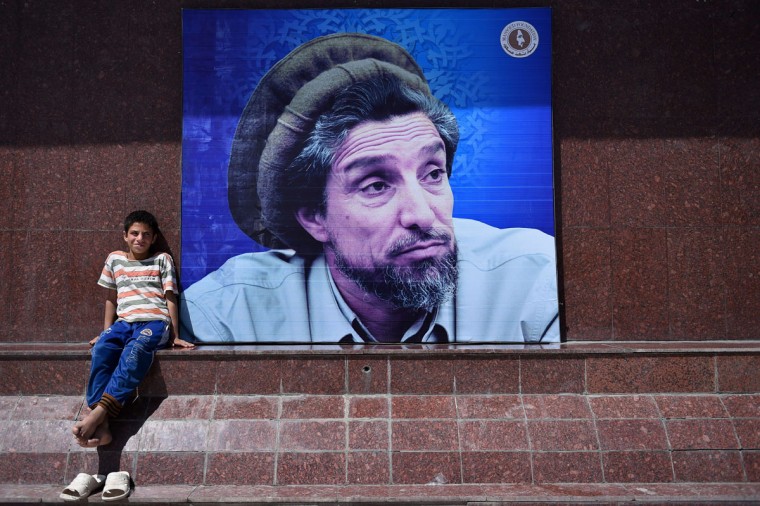 An Afghan boy sits next to poster bearing the image of the late resistance leader Ahmad Shah Massoud as his fourteenth death anniversary is marked in Kabul on September 9, 2015. Massoud, nicknamed the “Lion of the Panjshir” for his armed struggle against the Taliban that ruled Afghanistan at the time, died September 9, 2001 when two Tunisians posing as journalists with fake Belgian passports detonated a bomb hidden in the camera as they pretended to interview him. His death, just two days before the September 11 attacks in New York and Washington, has been linked to Osama bin Laden’s al-Qaeda network by US officials. (AFP Photo/Wakil Kohsar) 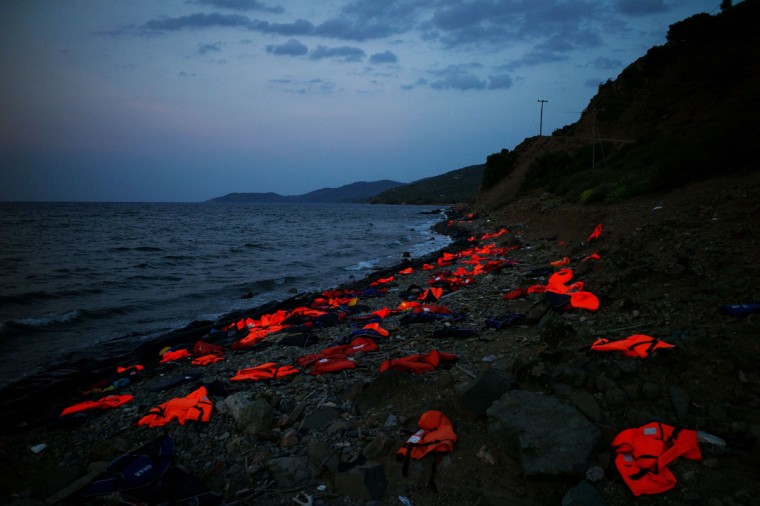 This photo taken on September 8, 2015 on the Greek island of Lesbos shows life vests left on the shore by incoming refugees. Overwhelmed by the 20,000 refugees and migrants currently camped on the holiday island, authorities hastily set up a refugee registration centre September 8 on a parched old football pitch. Local authorities have found it impossible to keep up with the pace of the influx, and tensions have boiled over. (AFP Photo/Angelos Tzortzinis) 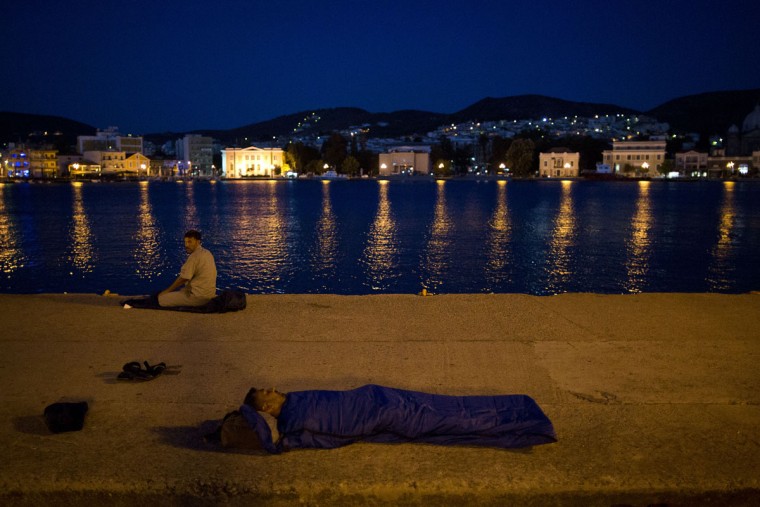 A refugee sleeps on the ground near the port of Mitylene on the northeast Greek island of Lesbos while waiting to get on board a ferry traveling to Athens, Wednesday, Sept. 9, 2015. The head of the European Union’s executive says 22 of the member states should be forced to accept another 120,000 people in need of international protection who have come toward the continent at high risk through Greece, Italy and Hungary. (AP Photo/Petros Giannakouris) 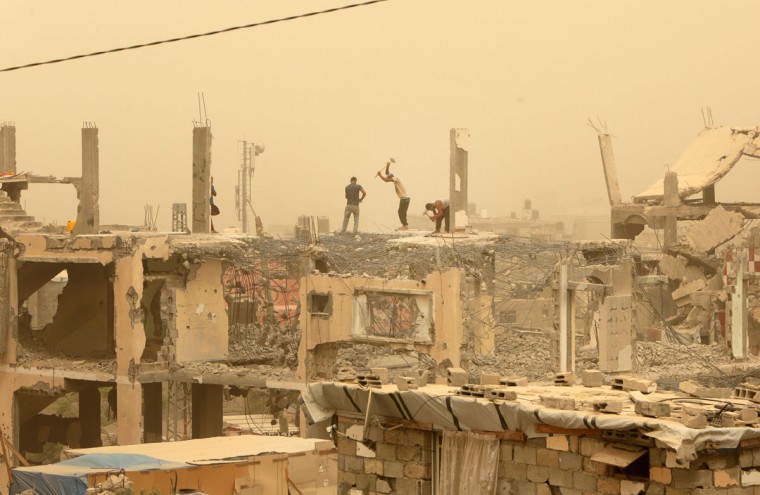 Palestinian laborers work on the rubble of buildings that were destroyed in the 50-day war between Israel and Hamas militants in the summer of 2014, during a sandstorm in Gaza City on September 9, 2015. A dense sandstorm engulfing parts of the Middle East left at least eight people dead and hundreds suffering from respiratory problems, as officials warned residents to stay indoors. (AFP Photo/Mahmud Hams) 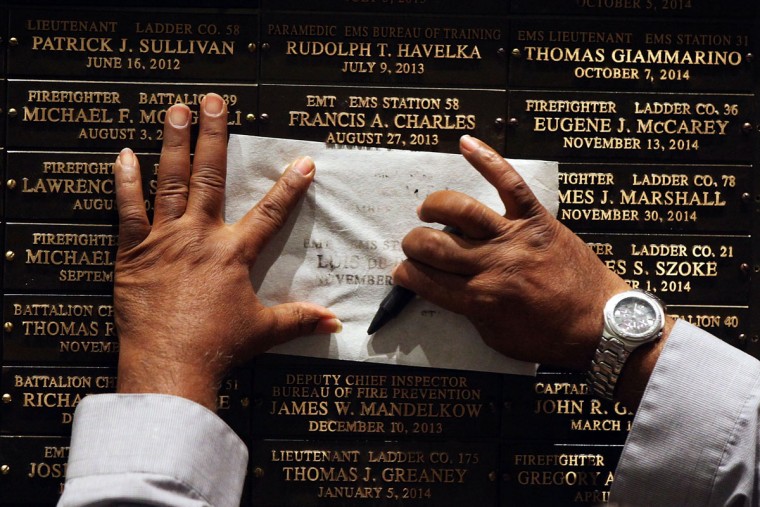 Family members copy the names of loved ones at a ceremony at the Fire Department of New York headquarters where names were added to a memorial wall for deaths related to World Trade Center illnesses on September 8, 2015 in New York City. A total of 21 names were added to the memorial which was unveiled in September 2011 and already lists the names of 89 FDNY members who died of illnesses related to their work at the World Trade Center site during and after the 9/11 attacks. (Photo by Spencer Platt/Getty Images) 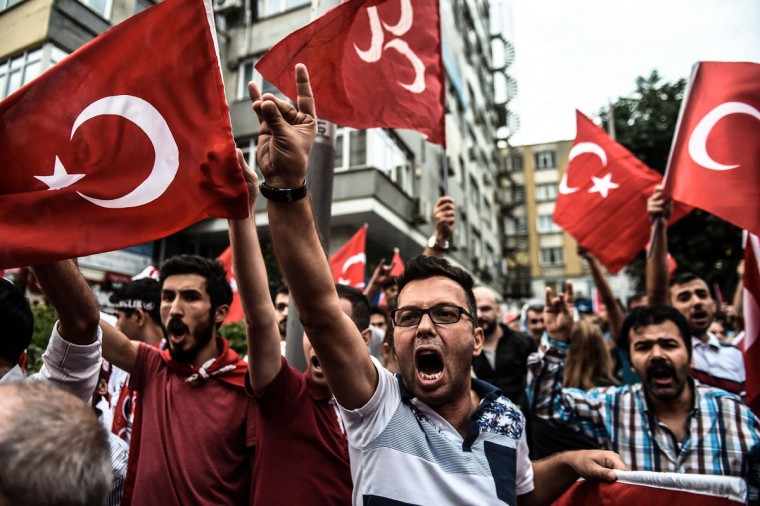 Turkish nationalists demonstrate against the Kurdish Workers Party (PKK) in Istanbul on September 8 ,2015. Turkish forces crossed into northern Iraq to pursue Kurdish militants on September 8 after the deadliest rebel attacks in years left dozens dead as the decades-long conflict escalated. Thirteen Turkish police were killed on September 8 in a new attack by PKK militants as violence in the east threatened to spiral out of control. That attack came two days after 16 Turkish soldiers were killed in a twin roadside bomb attack in Daglica in the southeastern Hakkari region, the army said, in the deadliest strike on troops in months. (AFP Photo/Ozan Kose) 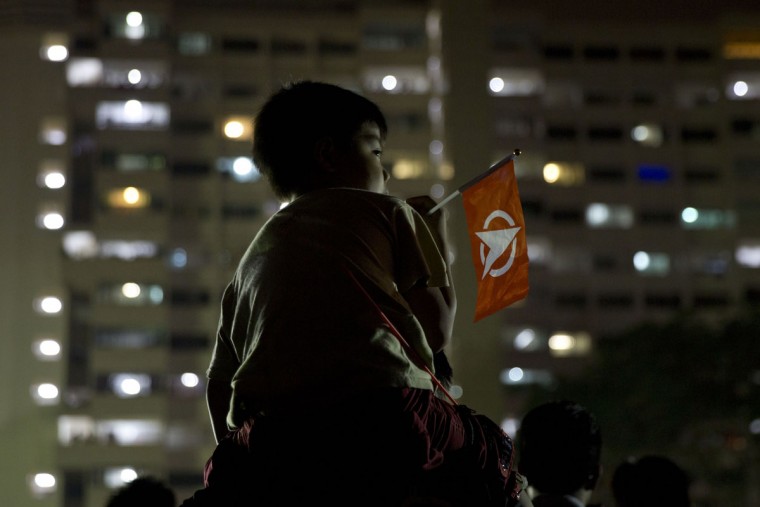 A child holds the flag for the opposition Singapore Democratic Party during a final rally before the Sept. 11 general elections in Singapore, Wednesday, Sept. 9, 2015. For the first time in Singapore’s history, opposition parties are contesting all 89 seats at stake. (AP Photo/Ng Han Guan) 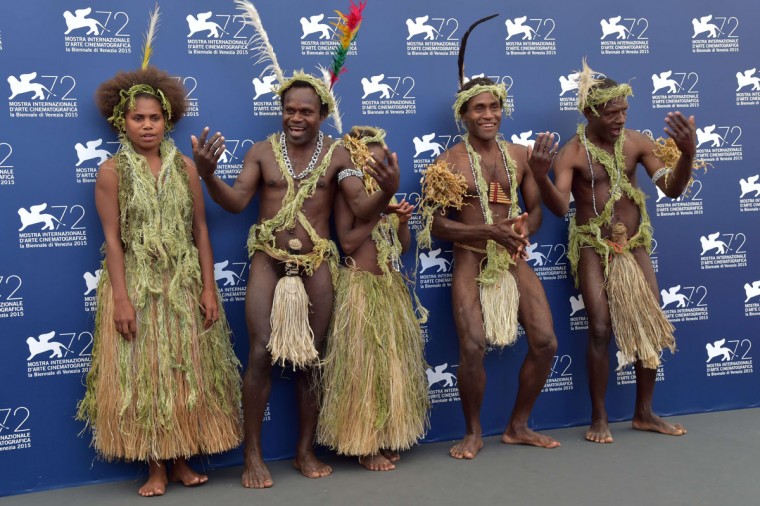 Members of a tribe from Vanuatu island pose during the photocall of the movie “Tanna” presented during the Film Critics Week at the 72nd Venice International Film Festival on September 8, 2015 at Venice Lido. (AFP Photo/Tiziana Cacace) 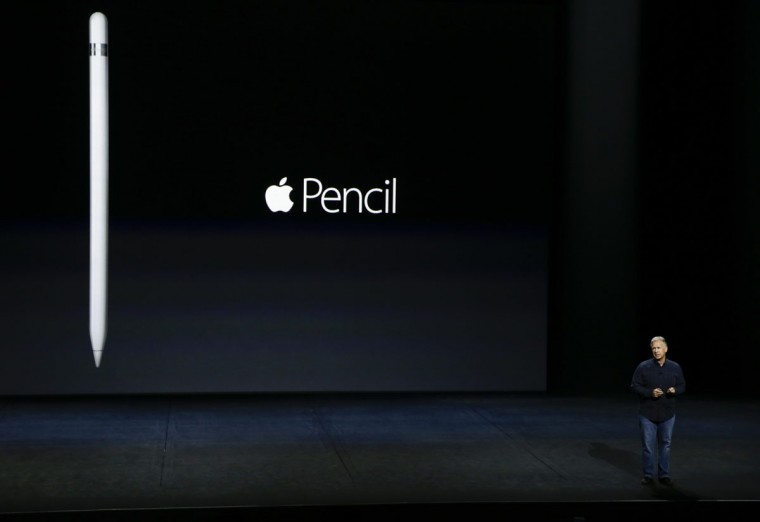 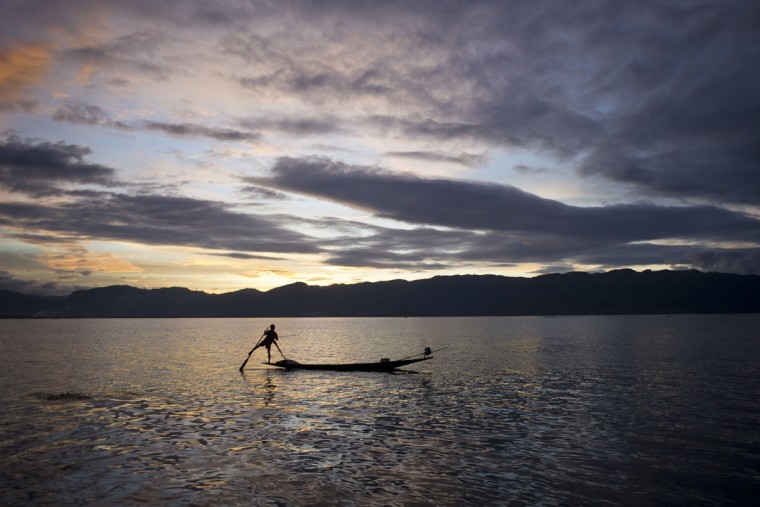 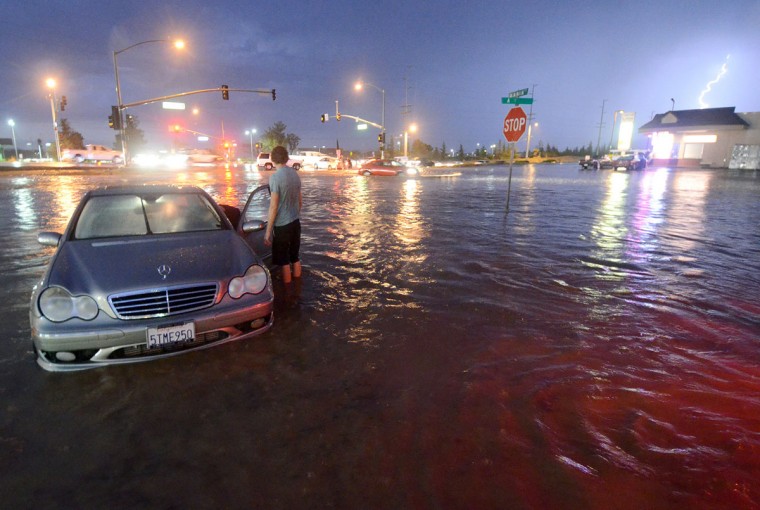 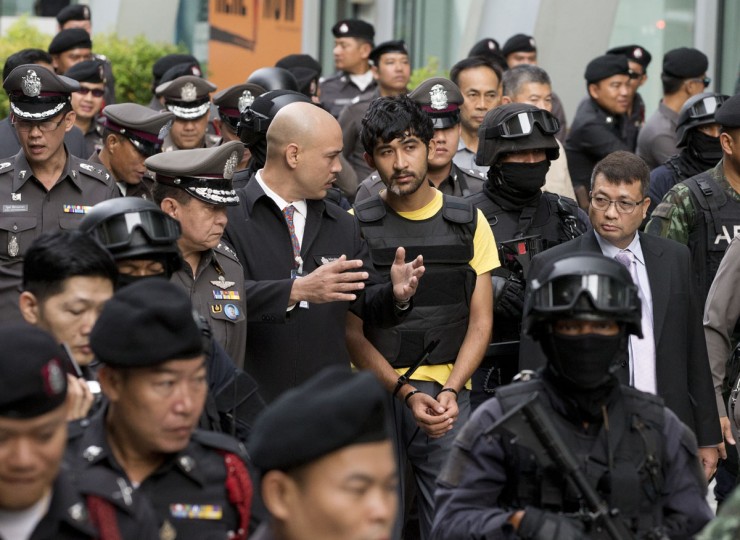 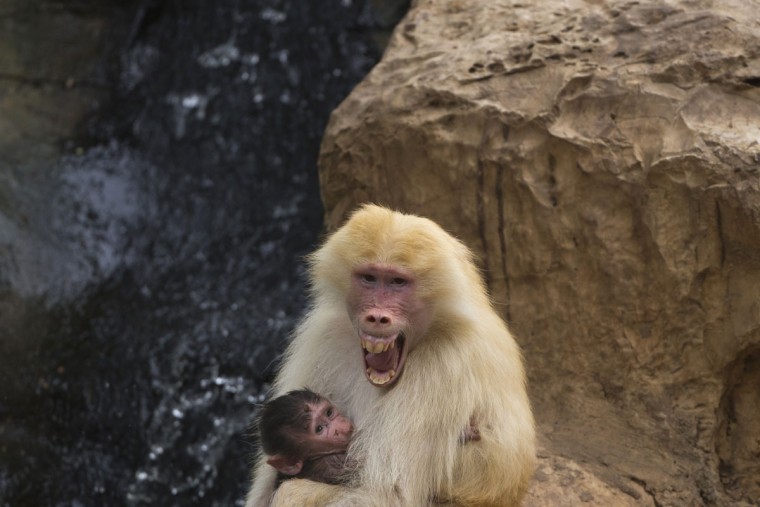 Sahara, a rare red-haired female Hamadryas Baboon holds 3 weeks old dark-furred baby in the Ramat Gan Safari Park near Tel Aviv, Israel, Wednesday, Sept. 9, 2015. A rare red-haired baboon gave birth recently to a dark-haired infant at an Israeli zoo, the first time in decades that one of these light-furred primates has given birth at the zoo. Mor Porat, a zookeeper, said the Safari is ecstatic about the birth of the baby and hopes that the mother’s light-furred gene will be passed on to other baboon offspring. (AP Photo/Ariel Schalit) 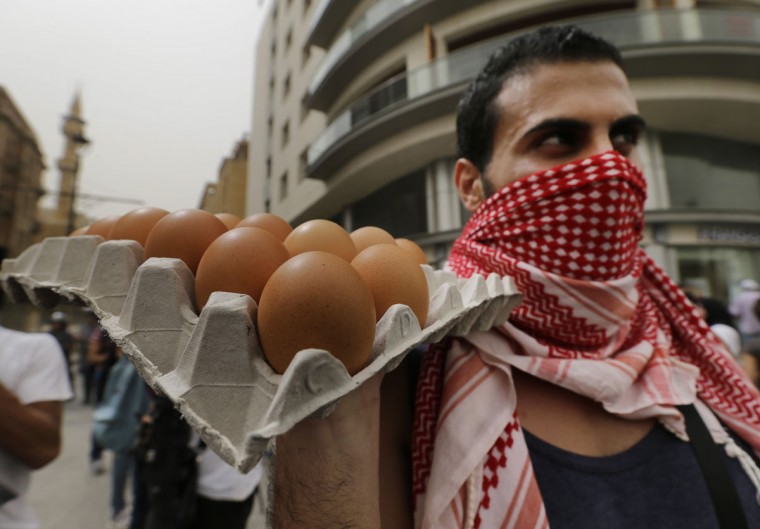 A Lebanese anti-government protester holds eggs, to throw them on the convoys of Lebanese politicians arriving at the parliament building, during a protest against the on-going trash crisis and government corruption, in downtown Beirut, Lebanon, Wednesday, Sept. 9, 2015. Lebanon’s prime minister says he hopes that political talks between senior politicians will help end government paralysis that has sparked angry street protests. (AP Photo/Hassan Ammar) 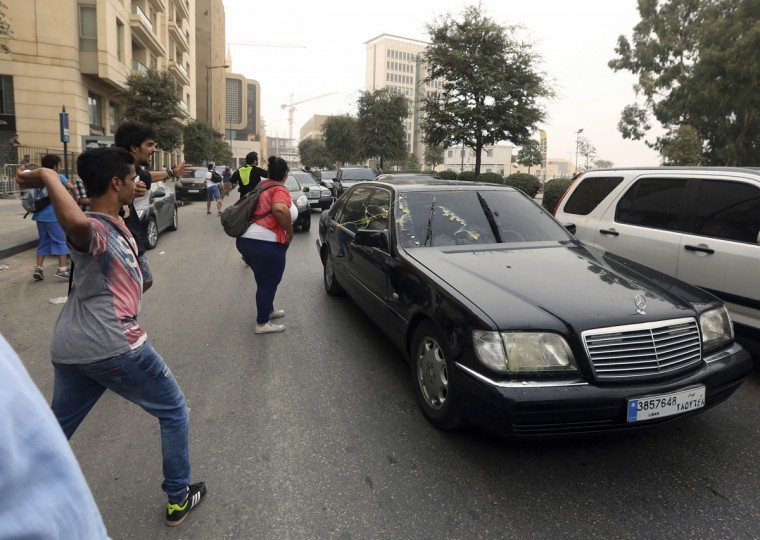 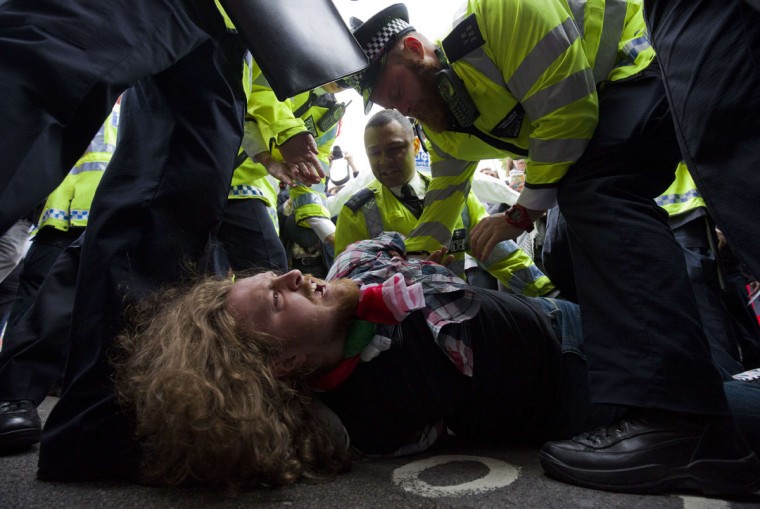 A pro-Palestinian demonstrator is restrained by police during a protest outside the gates of Downing Street in London on September 9, 2015. Over 100 pro-Israeli demonstrators and hundreds of pro-Palestinian activists rallied in front of Downing Street in London ahead of a planned visit of Israeli Prime Minister Benjamin Netanyahu. Netanyahu visits Britain this week for talks with his counterpart David Cameron as the right-wing Israeli leader faces diplomatic pressure over West Bank settlements and stalled peace efforts. (AFP Photo/Justin Tallis)