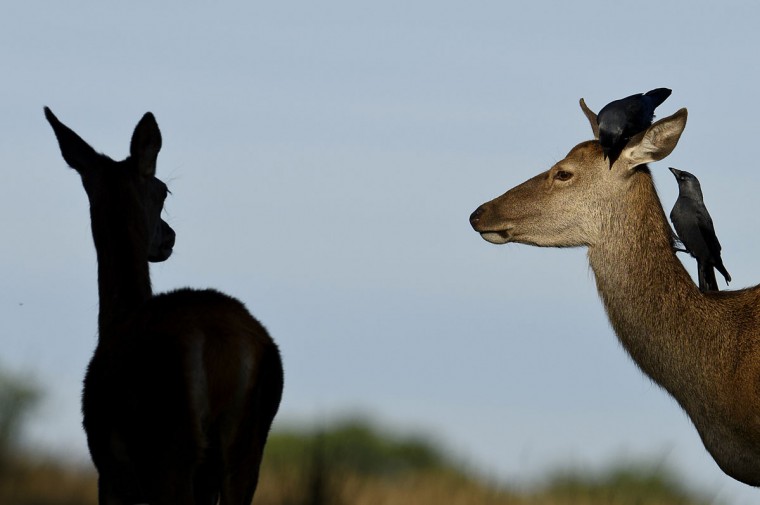 A deer is seen in Richmond Park on the first day of autumn on September 23, 2015 in London, England. The autumnal equinox usually falls around September 22 or 23 as the sun crosses the celestial equator, when day and night are roughly equal length. (Photo by Ben Pruchnie/Getty Images) 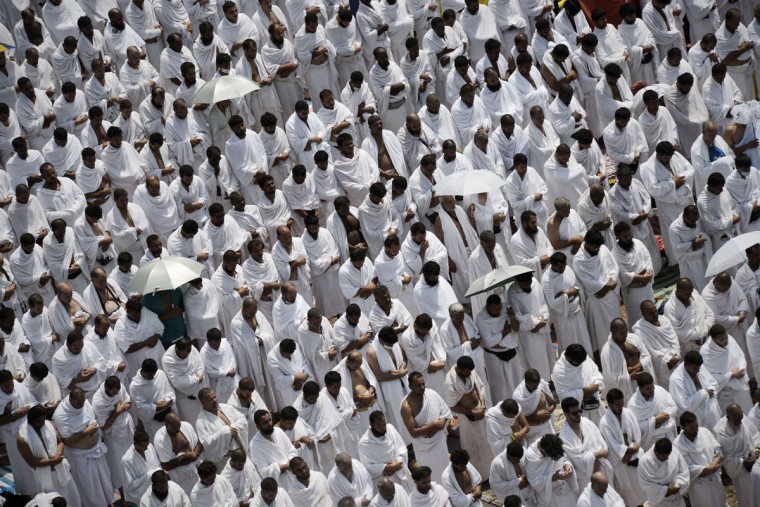 Muslim pilgrims gather to perform noon and afternoon prayers at Namira Mosque in Mount Arafat, southeast of the Saudi holy city of Mecca, on September 23, 2015. Arafat Day, on the 9th of the Islamic month of Dhul Hijja, is the climax of the hajj season. Pilgrims gather on the hill known as Mount Arafat, and its surrounding plain, where they remain until evening for prayer and Koran recitals. Prophet Mohammed is believed to have delivered his final hajj sermon there. (AFP Photo/Mohammed Al-Shaikh) 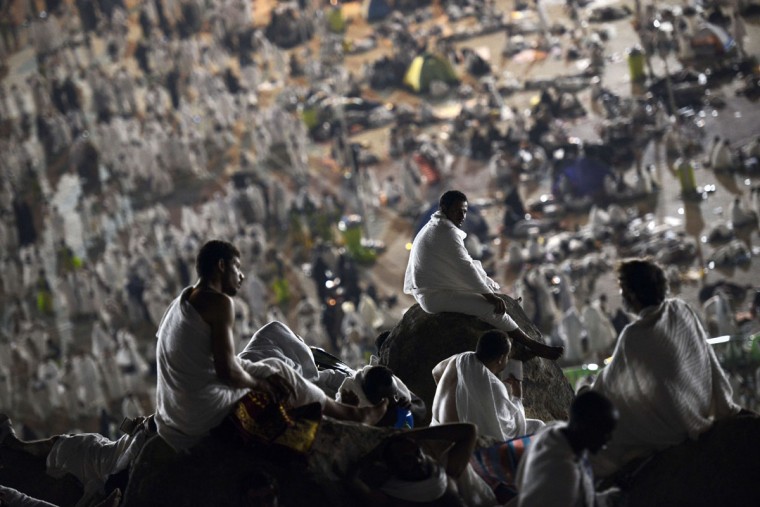 Muslim pilgrims join one of the Hajj rituals on Mount Arafat near Mecca early on September 23, 2015. Arafat Day, on the 9th of the Islamic month of Dhul Hijja, is the climax of the hajj season. Pilgrims gather on the hill known as Mount Arafat, and its surrounding plain, where they remain until evening for prayer and Koran recitals. Prophet Mohammed is believed to have delivered his final hajj sermon there. (AFP Photo/Mohammed Al-Shaikh) 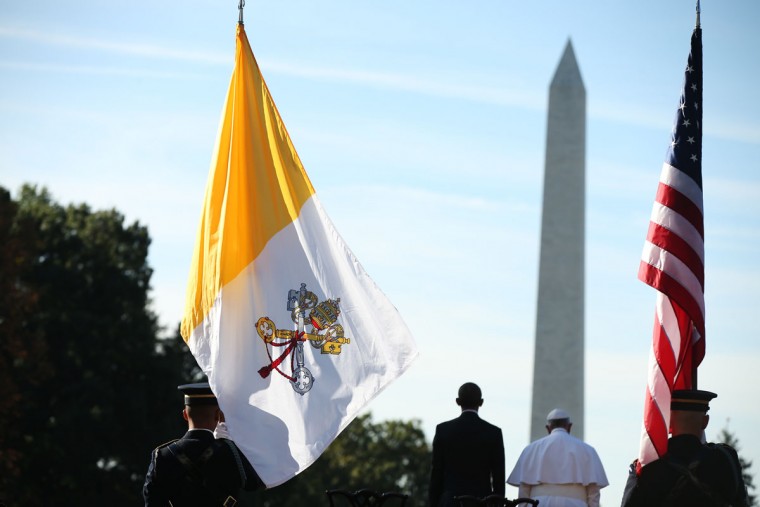 President Barack Obama and Pope Francis are flanked by a U.S. and Vatican flag during a state arrival ceremony on the South Lawn of the White House in Washington, Wednesday, Sept. 23, 2015. The Washington Monument is in the background. (AP Photo/Andrew Harnik) 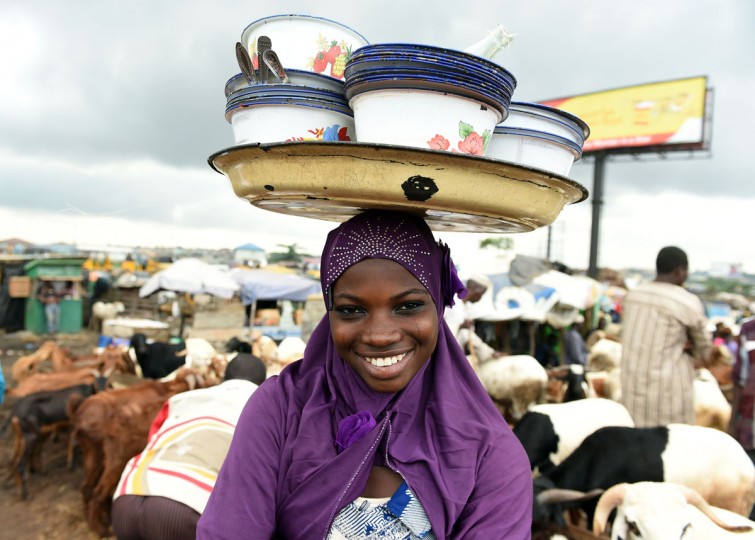 A young vendor hawks food on a market in Kara in the state of Ogun, on September 23, 2015. Nigeria imposed tight movement restrictions in the restive northeast after Boko Haram bombings that killed more than 100 raised fears of fresh attacks over the Eid al-Adha festival. The military said the use of all vehicles would be banned throughout Borno state during the Muslim festival, which is known as Sallah in Nigeria and marked with two days’ public holiday from Thursday. (AFP Photo/Pius Ekpeipius Utomi Ekpei) 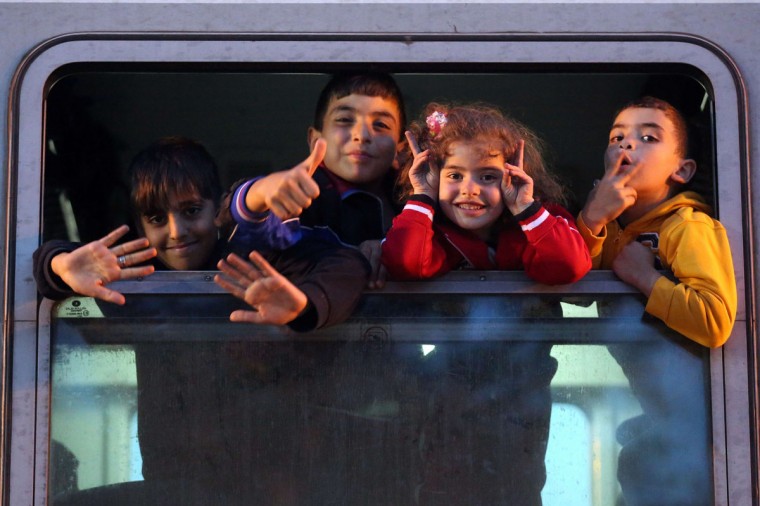 Migrant children gesture in a train heading to the Croatian-Hungarian border, at the train station of the east-Croatian town Tovarnik on September 22, 2015. More than 300,000 migrants have arrived by sea in Greece since January, the majority of whom continue their journey through Macedonia and Serbia on their way to EU countries Hungary and Croatia. (AFP Photo/Stringerstr/afp/getty Images ) 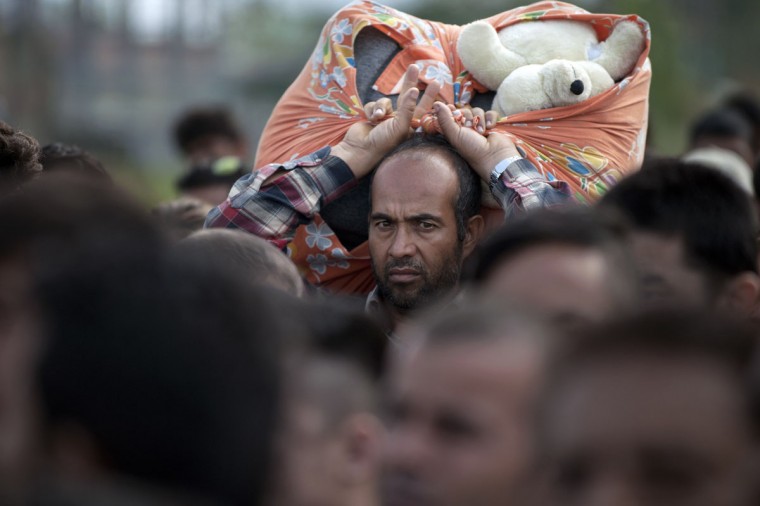 A man carries a bundle with a teddy bear in it as migrants and refugees wait in line to enter a camp after crossing the Greek border into Macedonia near Gevgelija on September 23, 2015. European Union leaders hold an emergency migration summit on September 23 amid a growing east-west split after ministers forced through a controversial deal to relocate 120,000 refugees. (AFP Photo/Nikolay Doychinov) 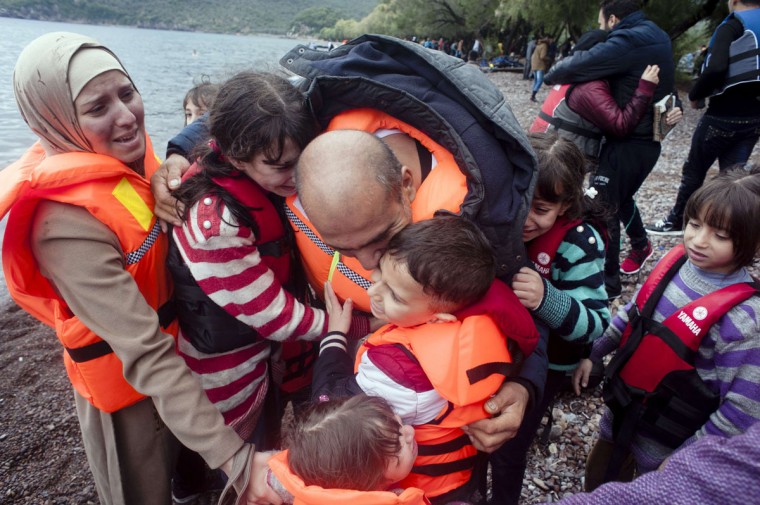 Migrants and refugees arrive on Kagia beach near the village of Sykamia, west of the port of Mytilene, on the Greek island of Lesbos after crossing the Aegean sea from Turkey on September 23, 2015. EU ministers neared a compromise on plans to relocate 120,000 refugees at emergency talks despite deep divisions over how to handle Europe’s worst migration crisis since World War II. (AFP Photo/Iakovos Hatzistavrou) 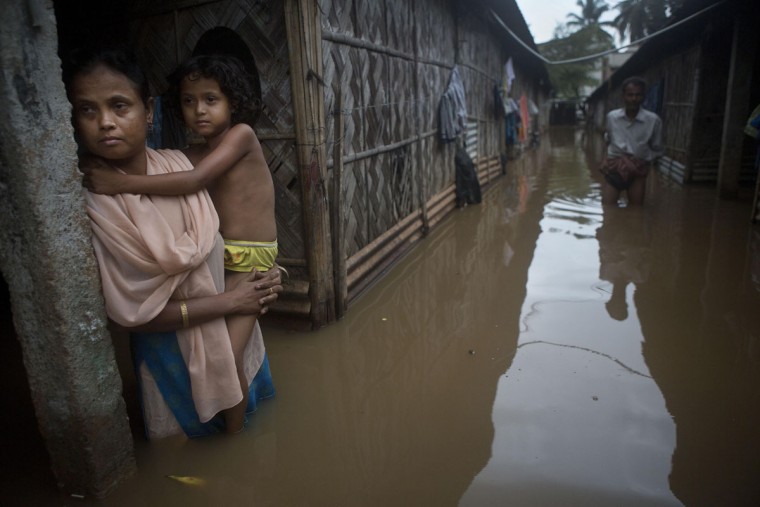 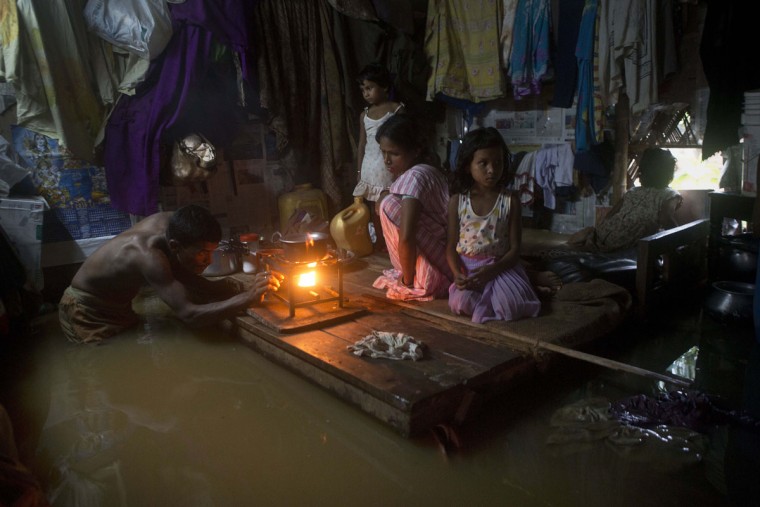 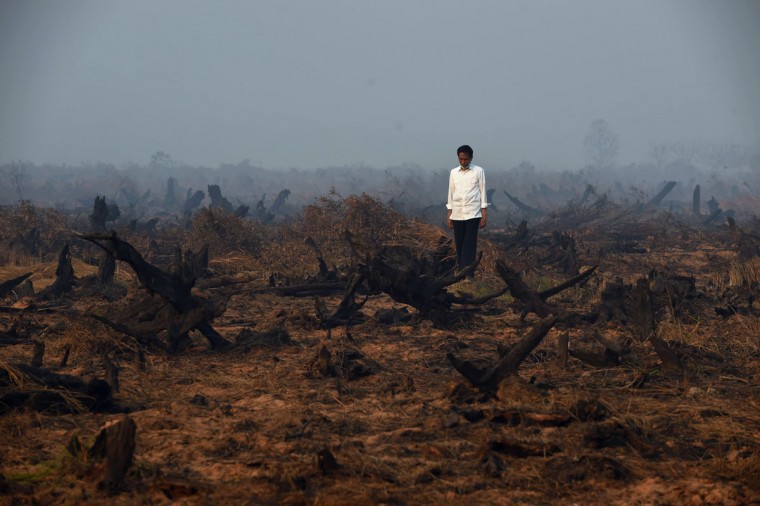 Indonesia’s President Joko Widodo inspects a peatland clearing that was engulfed by fire during an inspection of a firefighting operation to control agricultural and forest fires in Banjar Baru in Southern Kalimantan province on Borneo island on September 23, 2015. Indonesia has revoked the licence of a timber supplier and suspended the operations of three palm oil plantation operators over fires that have blanketed Southeast Asia in haze, while President Widodo has pledged this year that law-breakers will be punished. (AFP Photo/Romeo Gacad) 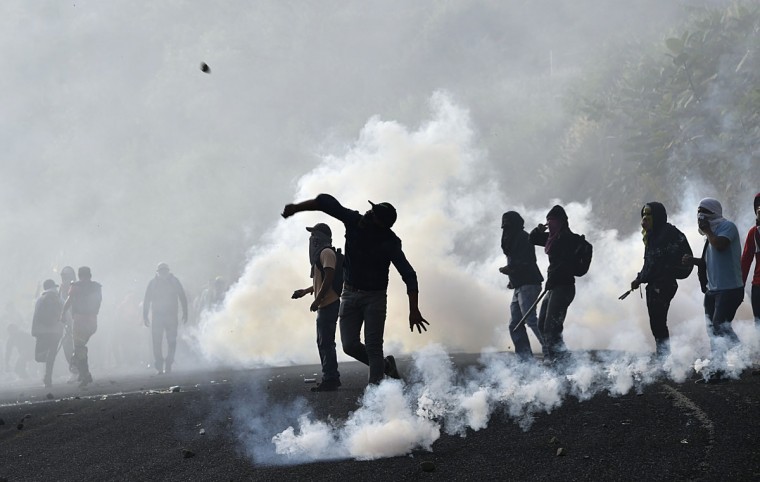 Student teachers from Ayotzinapa angry for the disappearance of 43 students clash with the riot police along the Tixtla-Chilpancingo highway in Tixtla, Guerrero State, Mexico, on September 22, 2015. Its almost a year since the teachers-in-training vanished on the night of September 26-27 in the southern Guerrero state city of Iguala. The fate of 42 of them remains a mystery, only one of the missing students has been confirmed dead. (AFP Photo/Yuri Cortez) 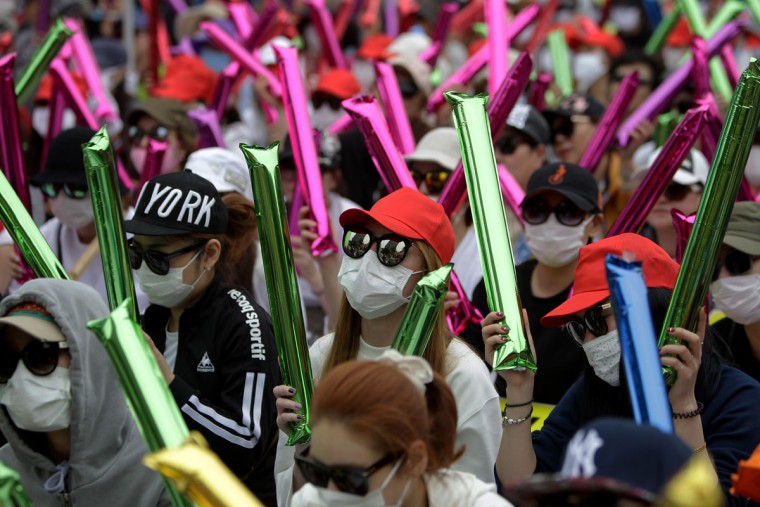 South Korean prostitutes hide their identities as they participate in a rally against anti-sex law on September 23, 2015 in Seoul, South Korea. Prostitutes rallied against government law aimed at the sex industry. The government began enforcing new laws eleven years ago to target human traffickers, pimps and prostitutes. Nearly seven years after tough laws began driving thousands of South Korean prostitutes out of business, sex workers of the red-light districts are fighting back, spurred by what they say is an unprecedented campaign of police harassment. (Photo by Chung Sung-Jun/Getty Images) 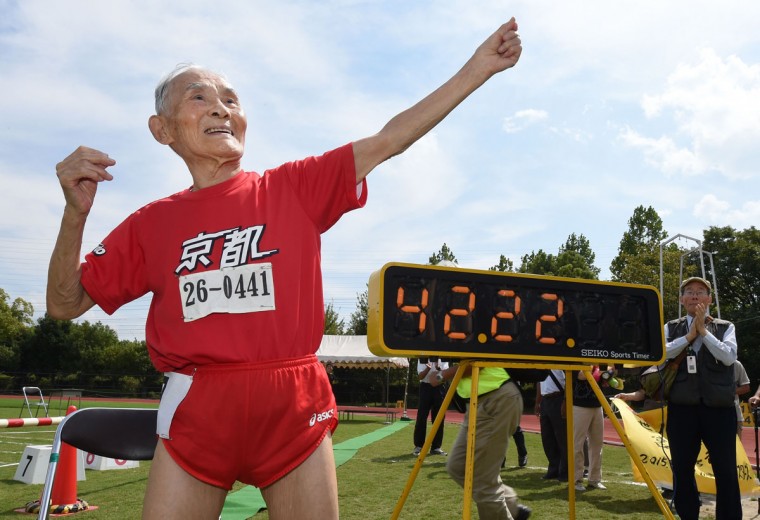 Hidekichi Miyazaki (in red), 105, imitates the pose of Usain Bolt after running with other competitors over eighty years of age during a 100-metre-dash in the Kyoto Masters Autumn Competiton in Kyoto, western Japan, on September 23, 2015. Miyazaki was authorised as the oldest sprinter who competed in a 100-metre-dash by the Guinness World Records. (AFP Photo/Toru Yamanaka) 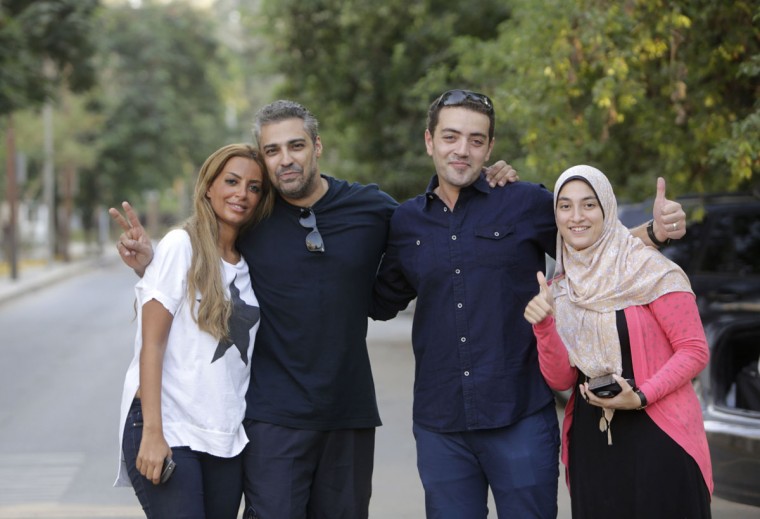 Canadian Al-Jazeera English journalist Mohamed Fahmy second left, and his Egyptian colleague Baher Mohammed, celebrate with their wives after being released from Torah prison in Cairo, Egypt, Wednesday, Sept. 23, 2015. Fahmy and his colleague Baher, were among a group of 100 people pardoned by Egyptian President Abdel-Fattah el-Sissi on the eve of the major Muslim holiday of Eid al-Adha. The pardon also comes a day before the Egyptian leader is to travel to New York to attend the United Nations General Assembly. (AP Photo/Amr Nabil) 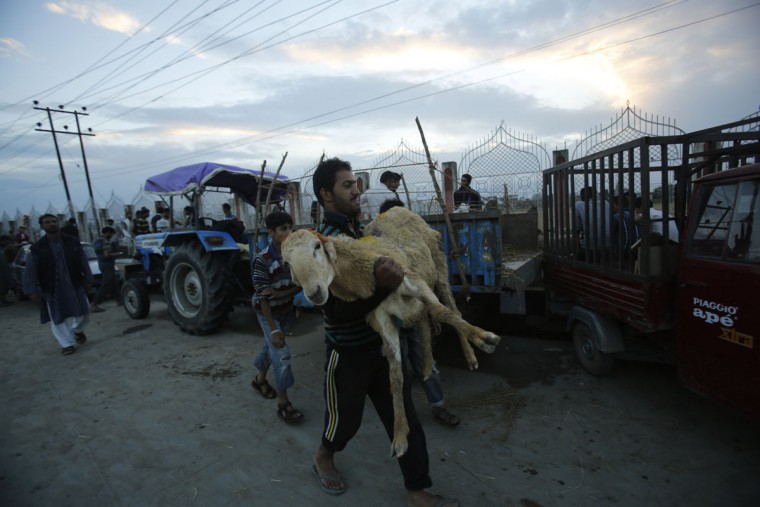 A Kashmiri Muslim man carries a sheep after buying it from a market ahead of the Muslim festival Eid al-Adha in Srinagar, Indian controlled Kashmir, Wednesday, Sept. 23, 2015. Muslims around the world celebrate Eid al-Adha, or the Feast of the Sacrifice, by sacrificing animals to commemorate the prophet Ibrahim’s faith in being willing to sacrifice his son. (AP Photo/Mukhtar Khan) 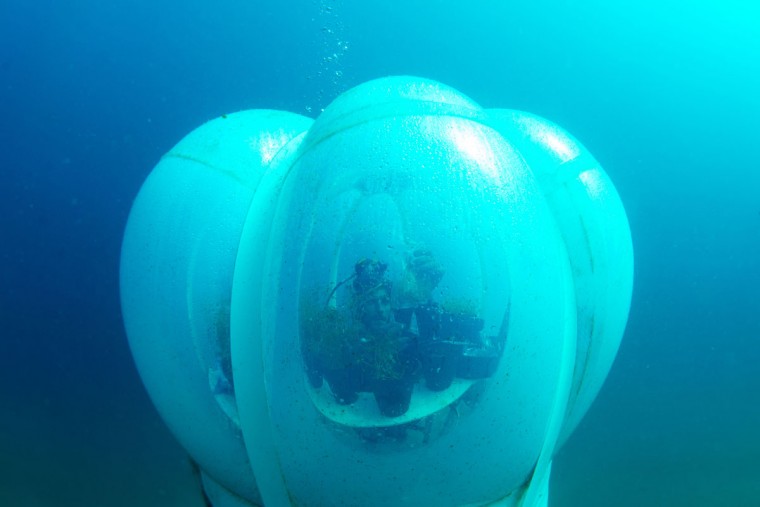 Italy’s Project coordinator of Nemo’s Garden, Gianni Fontanesi (C) harvests basil in an immerged Biosphere on September 20, 2015 in Noli. 3 biospheres with air have welcome seeds of basilic and others green plants to study their grows immerged at 8m in complete autonomy thanks to the natural Photosyntesis process, protected from any pollution from the outdoor plantations. This project is part of the Italian Pavillon theme at the EXPO2015 , “how to feed the planet”. (AFP Photo/Olivier Morin) 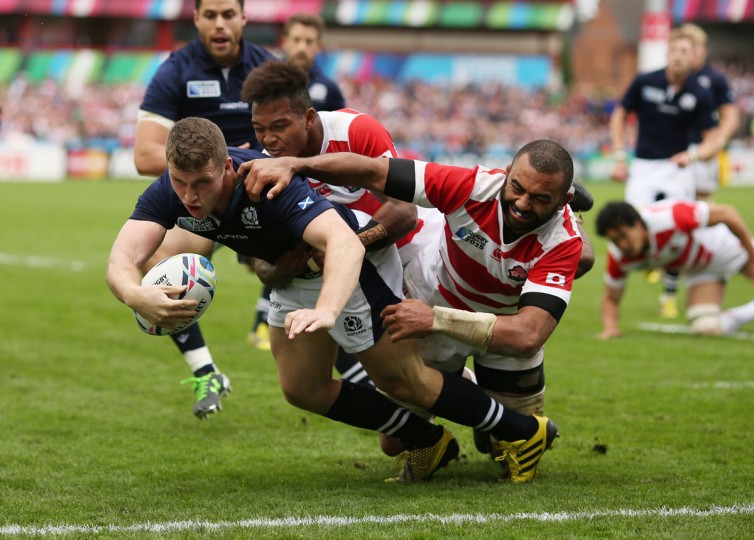 Mark Bennett of Scotland goes over to score his teams 4th try despite a tackle by Michael Leitch (R) of Japan during the 2015 Rugby World Cup Pool B match between Scotland and Japan at Kingsholm Stadium on September 23, 2015 in Gloucester, United Kingdom. (Photo by Ben Hoskins/Getty Images) 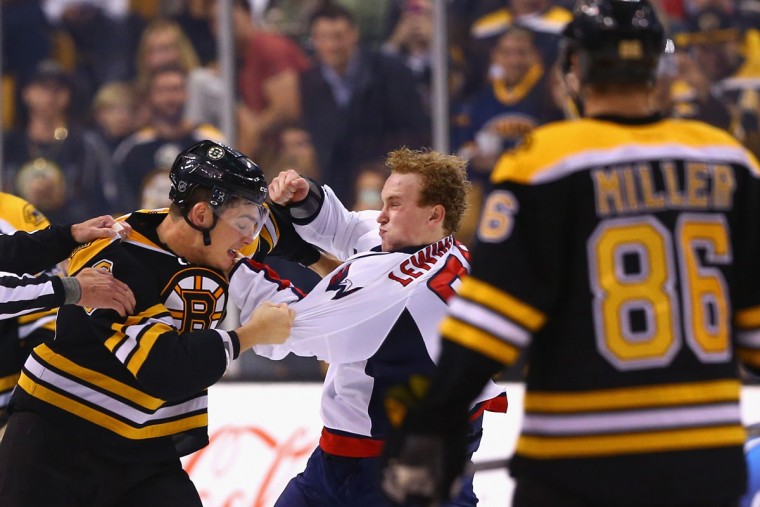 Tyler Lewington #78 of the Washington Capitals and Justin Hickman #60 of the Boston Bruins fight during the second period at TD Garden on September 22, 2015 in Boston, Massachusetts. (Photo by Maddie Meyer/Getty Images) 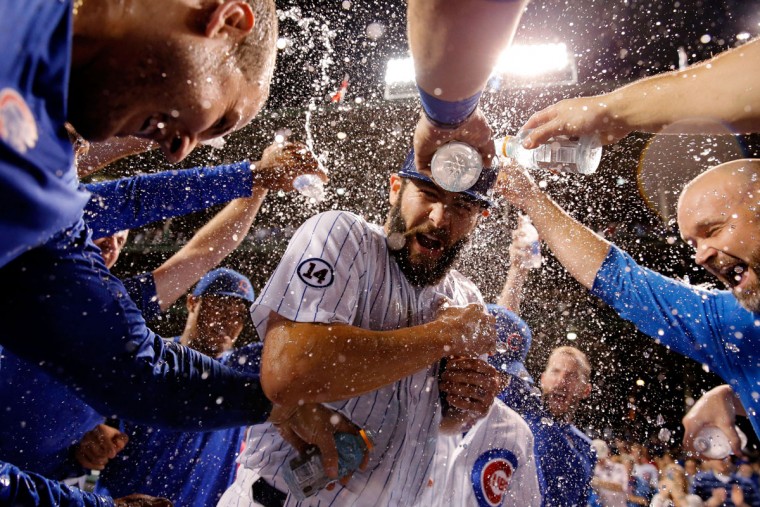 The Chicago Cubs celebrate with Jake Arrieta #49 on his 20th win of the season against the Milwaukee Brewers at Wrigley Field on September 22, 2015 in Chicago, Illinois. The Chicago Cubs won 4-0. (Photo by Jon Durr/Getty Images)