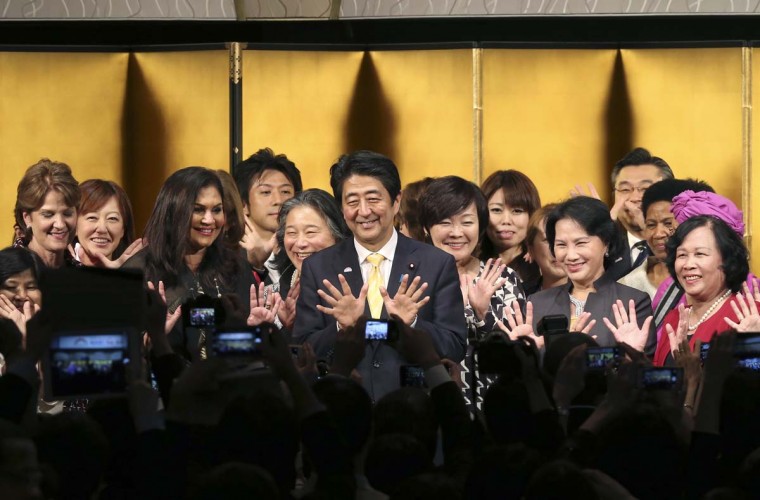 Japanese Prime Minister Shinzo Abe, center, poses for a photo with participants during a reception of WAW!, or the World Assembly for Women, in Tokyo, Friday, Aug. 28, 2015. More than 100 people from about 40 countries participated in the open forum for women. Japanese lawmakers approved a law Friday requiring large employers to set and publicize targets for hiring or promoting women as managers. The law approved by a vote of 230-1 in the House of Councillors is intended to promote greater gender equality and counter labor shortages that are arising as Japan’s population ages and declines. The decision coincided with the international conference showcasing Abe’s commitment to increasing the share of women in leadership positions to 30 percent. || CREDIT: KOJI SASAHARA, POOL – AP PHOTO 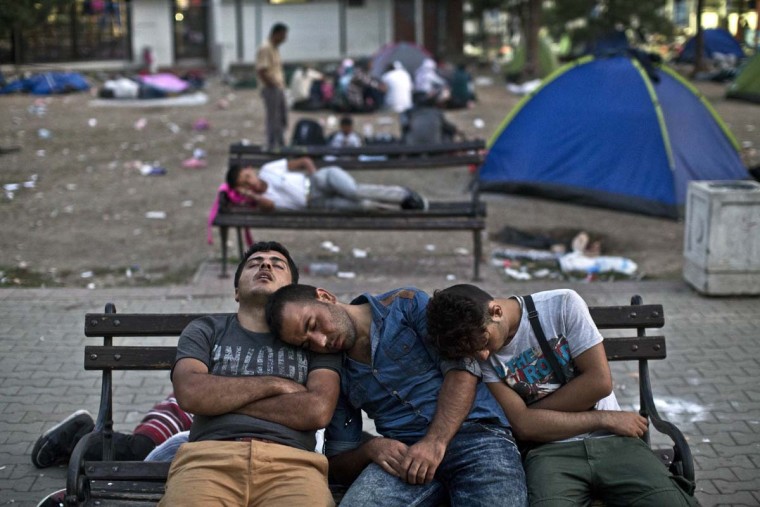 Migrants sleep on a bench at a park in Belgrade, Serbia, Friday, Aug. 28, 2015. Over 10,000 migrants, including many women with babies and small children, have crossed into Serbia over the past few days and headed toward Hungary and the EU Schengen Area, a zone with no internal border checks between member countries. || CREDIT: MARKO DROBNJAKOVIC – AP PHOTO 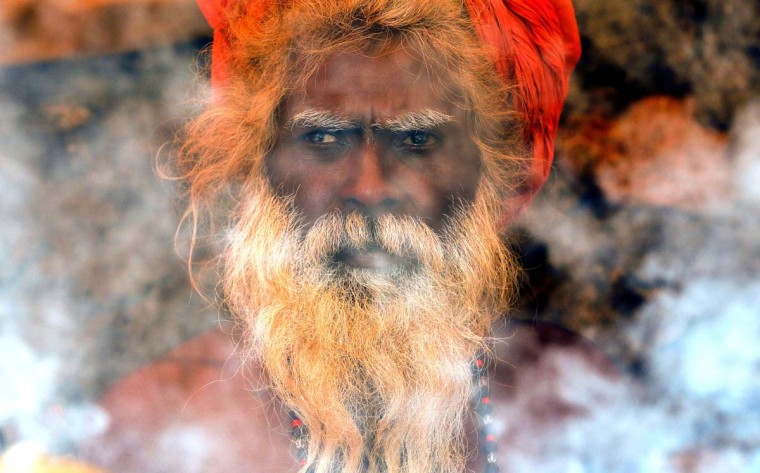 A Naga sadhu, or naked Hindu holy man, performs a ritual inside his tent during Kumbh Mela, or Pitcher festival, at Trimbakeshwar, India, Friday, Aug. 28, 2015. Hindus believe taking a dip in the waters of a holy river during the festival will cleanse them of their sins. The festival is held four times every 12 years. || CREDIT: RAJANISH KAKADE – AP PHOTO 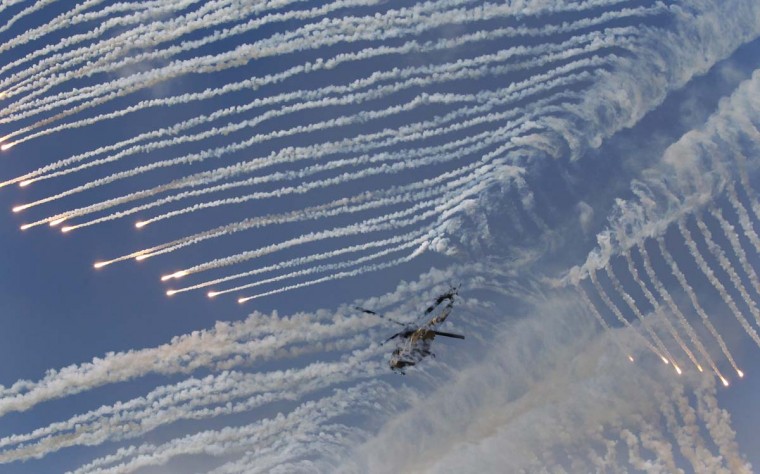 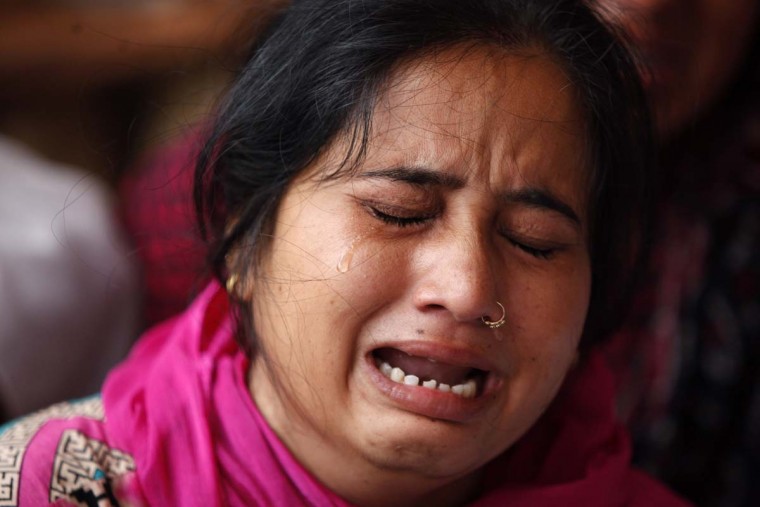 Daughter of Indian civilian Banso Devi, who was killed in alleged firing from the Pakistan side into a residential area, wails at Sai village, in Ranbir Singh Pura near the India-Pakistan international border, about 40 kilometres (25 miles) from Jammu, India, Friday, Aug. 28, 2015. Indian and Pakistani border guards traded gunfire in the divided region of Kashmir, striking homes at villages near the disputed border region after midnight. || CREDIT: CHANNI ANAND – AP PHOTO 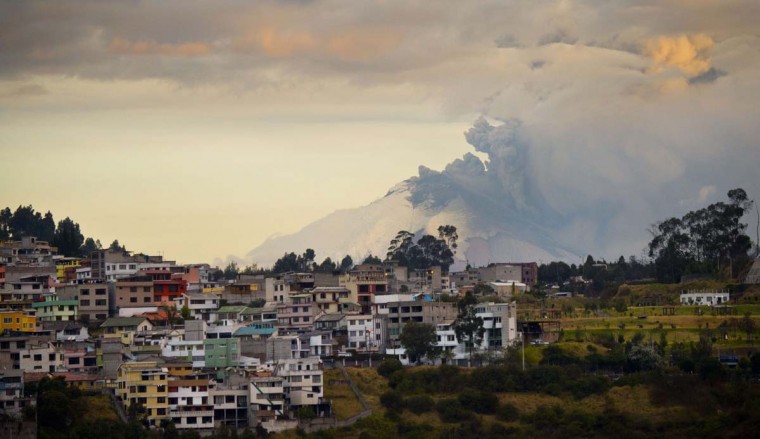 The Quito of the Cotopaxi volcano continues spewing ash on August 27, 2015. 5. The volcanic activity, which began August 14 after 138 years of silence, has continued with “steam emissions and a moderate load of ash” the country’s Security Ministry has said. || CREDIT: MARTIN BERNETTI – AFP/GETTY IMAGES 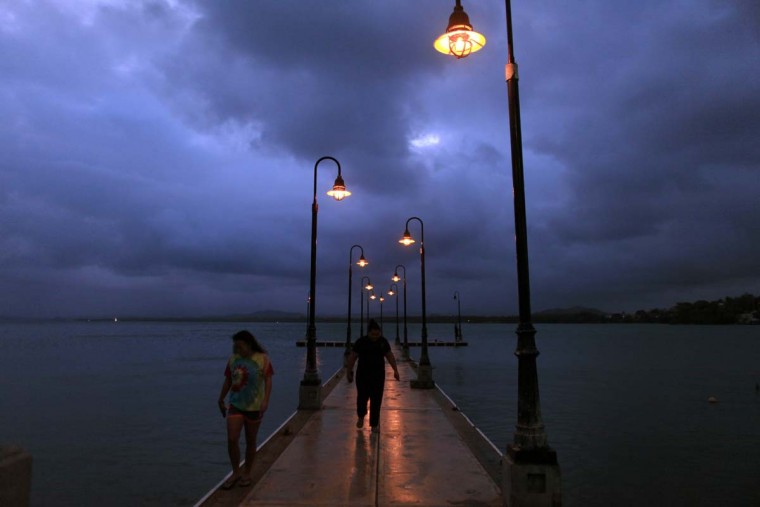 A couple walks on a pier under cloudy skies as Tropical Storm Erika approaches the island in Naguabo, Puerto Rico, Thursday, Aug. 27, 2015. Erika was expected to move near Puerto Rico and the Virgin Islands on Thursday and be near or just north of the Dominican Republic on Friday as it heads toward Florida early next week, possibly as a hurricane. || CREDIT: RICARDO ARDUENGO – AP PHOTO 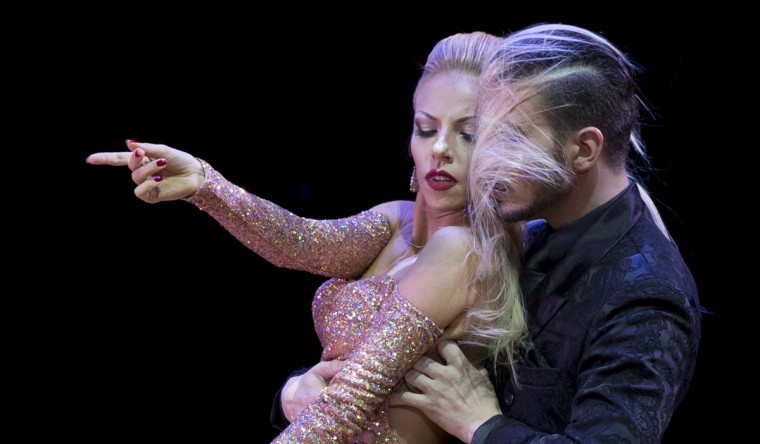 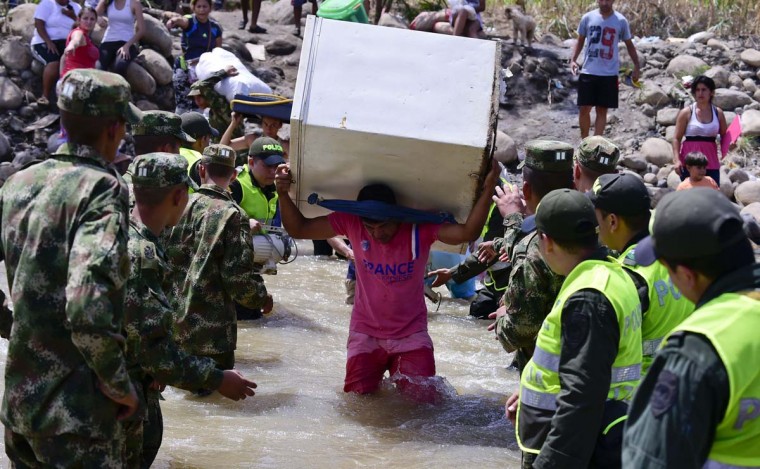 Colombians leaving Venezuela with their belongings cross the bordering Tachira River to arrive in Cucuta, Colombia, on August 27, 2015. Hundreds of Colombians are fleeing Venezuela, opting to leave the country with their belongings rather than be deported empty-handed like more than 1,000 people sent home in an escalating border crisis. Venezuelan President Nicolas Maduro ordered the border between Tachira and the Colombian department of Norte de Santander closed last week in response to an attack by unidentified assailants on a military patrol, which wounded a civilian and three soldiers on an anti-smuggling operation. || CREDIT: LUIS ACOSTA – AFP/GETTY IMAGES 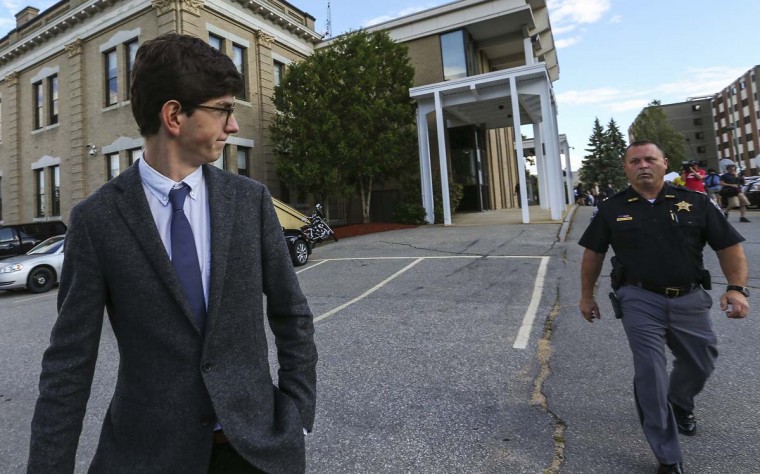 While the jury still deliberates, former St. Paul’s School student Owen Labrie, left, leaves the Merrimack Superior Court at the end of day with security in tow Thursday, Aug. 27, 2015, in Concord, N.H. Labrie is charged with raping a 15-year-old freshman as part of Senior Salute, in which seniors try to romance and have intercourse with underclassmen before leaving the prestigious St. Paul’s School in Concord. || CREDIT: CHERYL SENTER, POOL – AP PHOTO 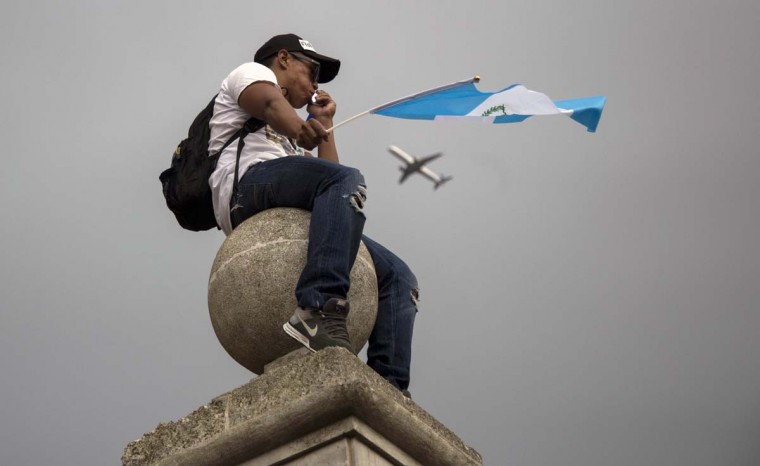 A protester waving a Guatemalan flag sits on a column at the Metropolitan Cathedral during a national strike demanding the resignation of Guatemalan President Otto Perez Molina in Guatemala City, Thursday, Aug. 27, 2015. Pressure grew on Perez Molina to resign as business and government offices closed, protesters marched and the attorney general’s office urged him to step down “to prevent ungovernability that could destabilize the nation.” || CREDIT: LUIS SOTO – AP PHOTO 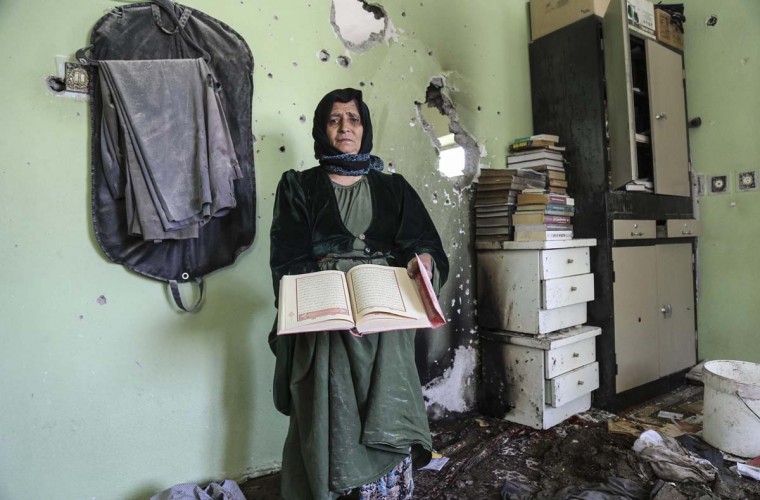 A Kurdish woman holds the Quran in a damaged house after clashes between Kurdish activists and Turkish government forces on August 27, 2015, at Yuksekova, in Hakkari. At least three people were reportedly killed in clashes overnight between Turkish security forces and Kurdish activists in the southeastern Turkish district of Yuksekova, according to activist and local media reports. STRINGER – AFP/GETTY IMAGES 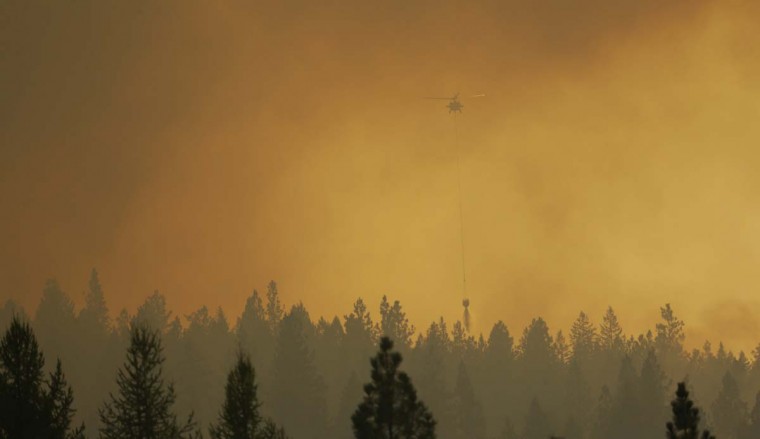 A helicopter makes a water bucket drop as it flies through smoky air while fighting a wildfire that flared up in the late afternoon near Omak, Wash., Thursday, Aug. 27, 2015. Firefighters were holding their own Thursday against the largest wildfire on record in Washington state, even as rising temperatures and increased winds stoked the flames. || CREDIT: TED S. WARREN – AP PHOTO 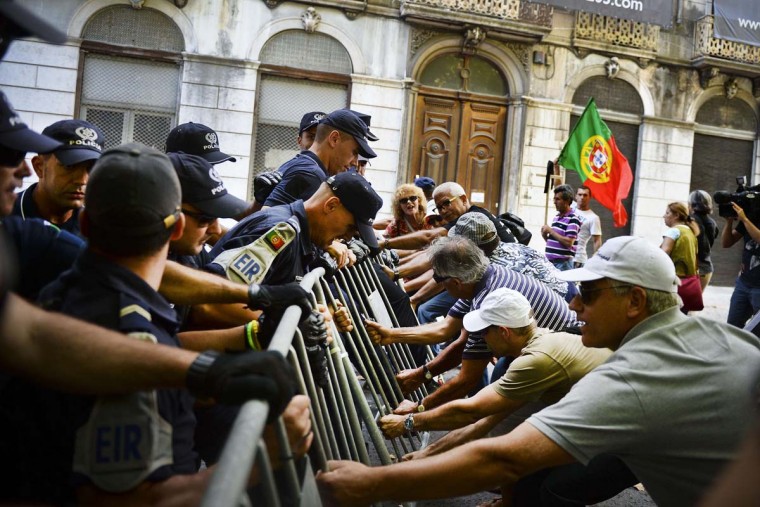 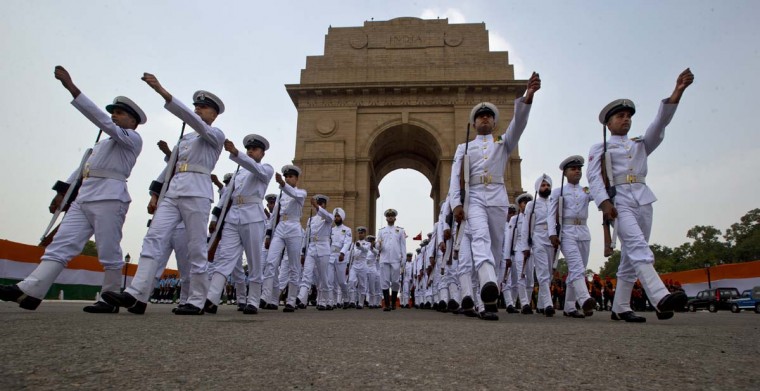 Indian soldiers leave after a ceremony to honor soldiers killed in action on occasion of 50th anniversary of India’s win over Pakistan in the war of 1965, at the India Gate war memorial in New Delhi, India, Friday, Aug. 28, 2015. India and Pakistan have fought three wars, two of them over Kashmir. || CREDIT: SAURABH DAS – AP PHOTO 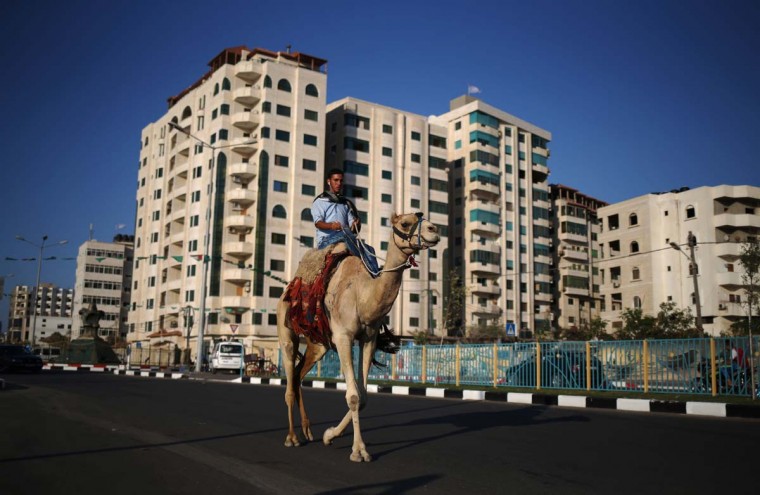 A Palestinian man rides a camel in a street in Gaza City on August 27, 2015. || CREDIT: MOHAMMED ABED – AFP/GETTY IMAGES 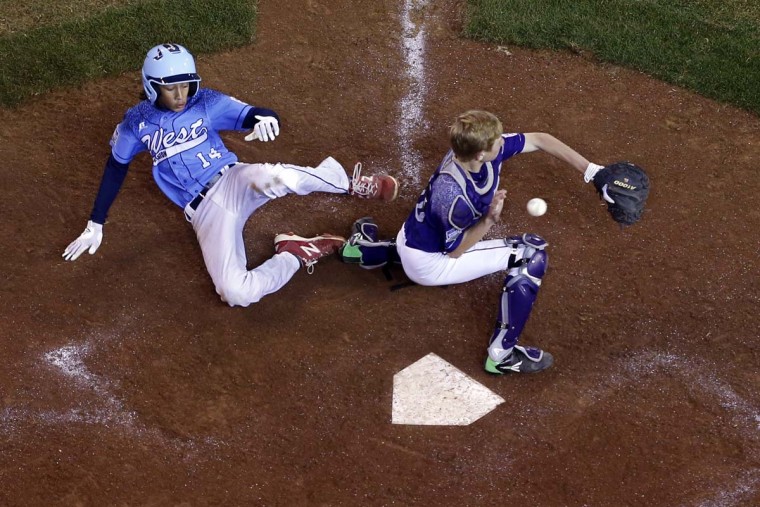 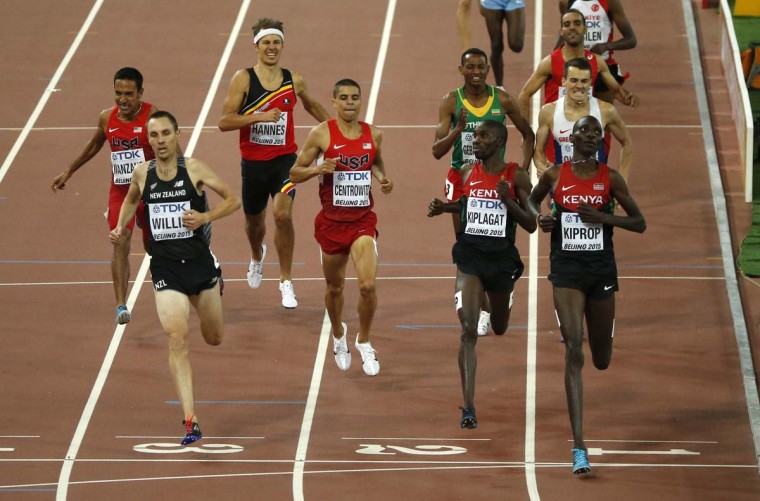