Michael Phelps was back in the pool Monday at the Phillips 66 National Championships after securing three victories through Sunday; David Conley, who authorities say fatally shot a woman he’d previously dated, her husband and six children – including a boy believed to be his own son – made his first court appearance; flooding in Myanmar spreads to affect more than a million people; and more, in the day in photos from around the world. 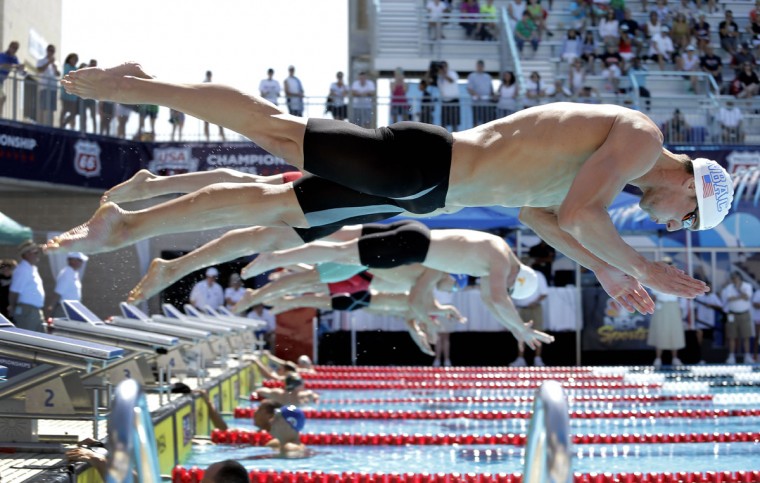 Michael Phelps, front, competes in the preliminary round of the men’s 200-meter breaststroke at the the U.S. swimming nationals, Monday, Aug. 10, 2015, in San Antonio. (AP Photo/Eric Gay) 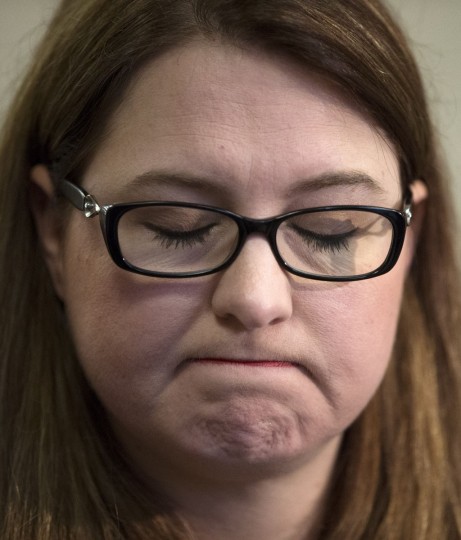 Lead prosecutor Alycia Harvey pauses as she talks about the charges against David Conley after his first court appearance, Monday, Aug. 10, 2015, in Houston. Conley, who has a violent criminal history, entered a Houston home through an unlocked window and fatally shot a woman he’d previously dated, her husband and six children, including a boy believed to be his own son, authorities said. He is charged with capital murder in the deaths. (AP Photo/David J. Phillip) 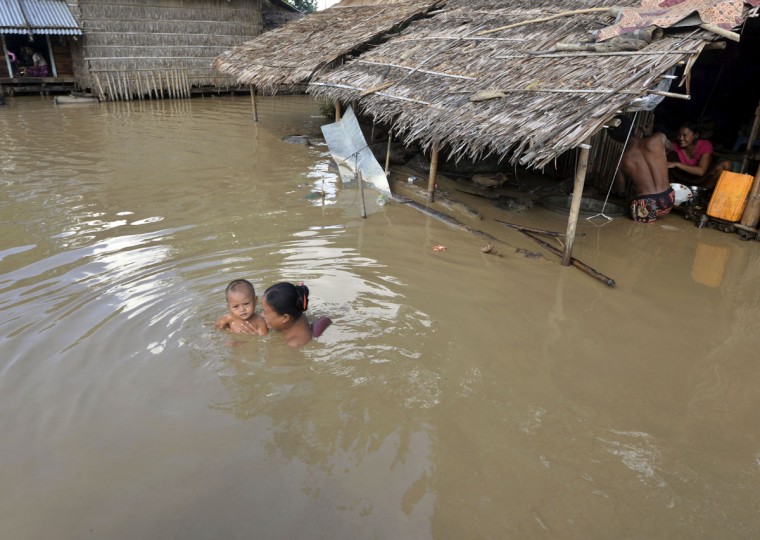 In this Sunday, Aug. 9, 2015 photo, a woman swims with her child near their half-submerged residence in Zalun township, Ayeyarwaddy delta, Myanmar. The number of people affected by flooding across Myanmar was approaching 1 million on Sunday, with waters in the low-lying southwestern delta inundating homes and forcing villagers into temporary shelters, the government said. (AP Photo/Khin Maung Win) 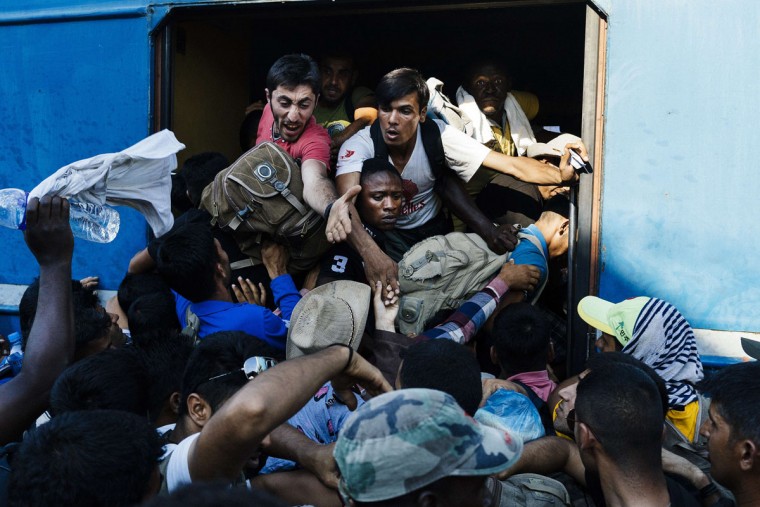 Migrants rush as they try to get on a train heading to the border with Serbia at the train station of Gevgelija, on the Macedonian-Greek border, on August 9, 2015. Non-EU Serbia’s frontier with Hungary, which is in the bloc’s passport-free Schengen zone, has become a major crossing point for the huge numbers of migrants entering the EU. (AFP Photo/Dimitar Dilkoff) 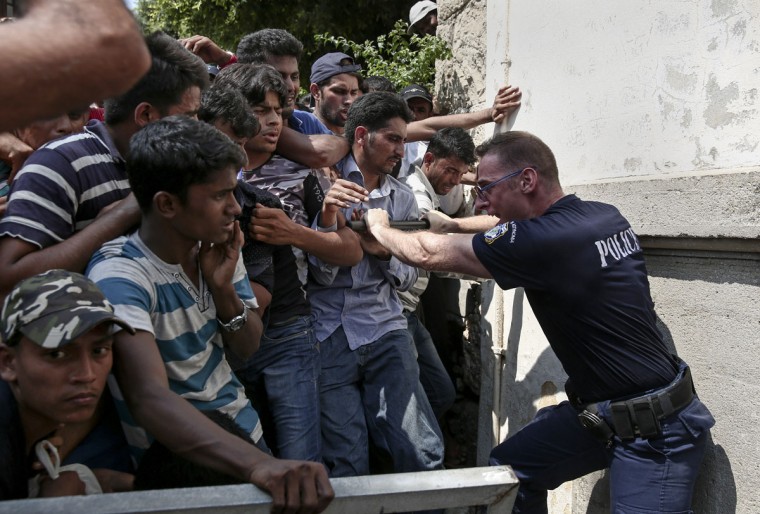 A Greek policeman tries to hold migrants behind a fence as they wait for a registration procedure outside a police station at southeastern island of Kos, Monday, Aug. 10, 2015. Greece’s coast guard rescued more than 1,400 migrants in nearly 60 search and rescue operations near several Greek islands in the eastern Aegean Sea over the past three days as the pace of new arrivals increase, authorities said Monday. (AP Photo/Yorgos Karahalis) 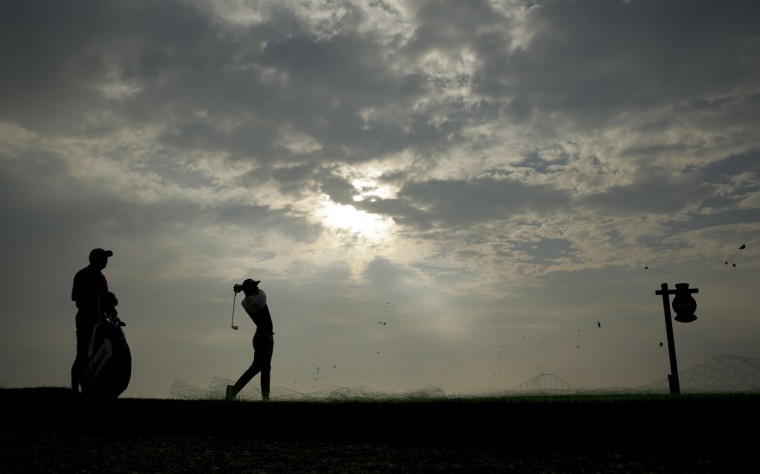 Adam Scott, of Australia, watches his tee shot on the third hole during a practice round for the PGA Championship golf tournament at Whistling Straits Golf Course on Monday, Aug. 10, 2015, in Haven, Wis. (AP Photo/Chris Carlson) 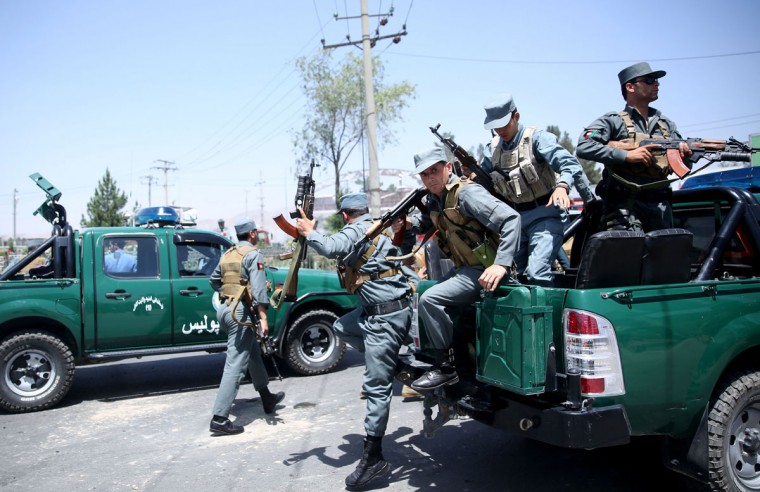 Afghan police arrive at the site of an attack at the main gate of International Hamed Karzai Airport in Kabul, Afghanistan, Monday, Aug. 10, 2015. An explosion on Monday at a busy roundabout near the entrance to Kabul’s international airport that wounded at least seven people appears to have been caused by a suicide car bomb, officials said. (AP Photo/Massoud Hossaini) 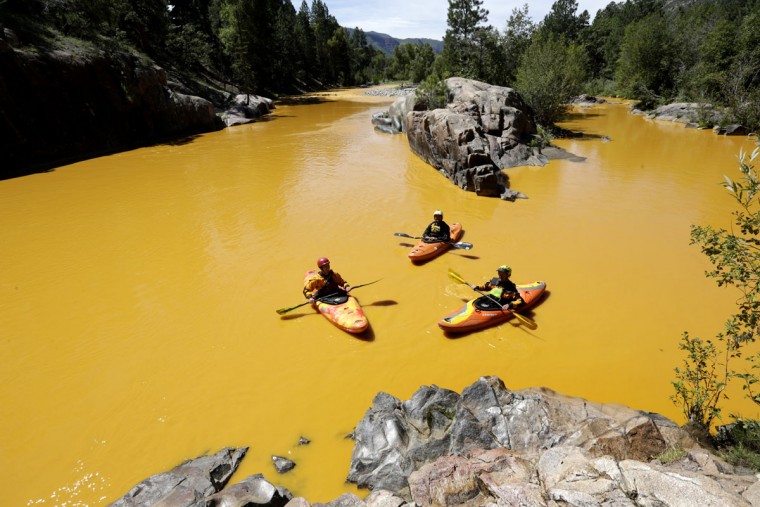 People kayak in the Animas River near Durango, Colo., Thursday, Aug. 6, 2015, in water colored from a mine waste spill. The U.S. Environmental Protection Agency said that a cleanup team was working with heavy equipment Wednesday to secure an entrance to the Gold King Mine. Workers instead released an estimated 1 million gallons of mine waste into Cement Creek, which flows into the Animas River. (Jerry McBride/The Durango Herald via AP) 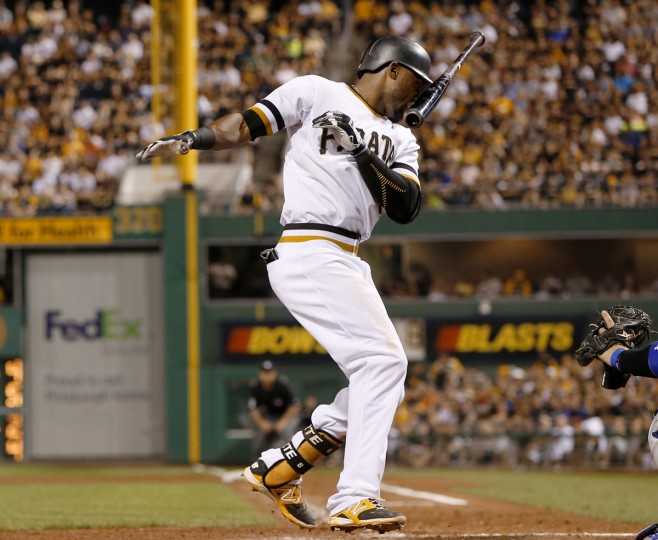 Pittsburgh Pirates’ Starling Marte loses his bat as he is hit by a pitch by Los Angeles Dodgers relief pitcher Juan Nicasio in the sixth inning of a baseball game, Sunday, Aug. 9, 2015, in Pittsburgh. The Pirates won 13-6. (AP Photo/Keith Srakocic) 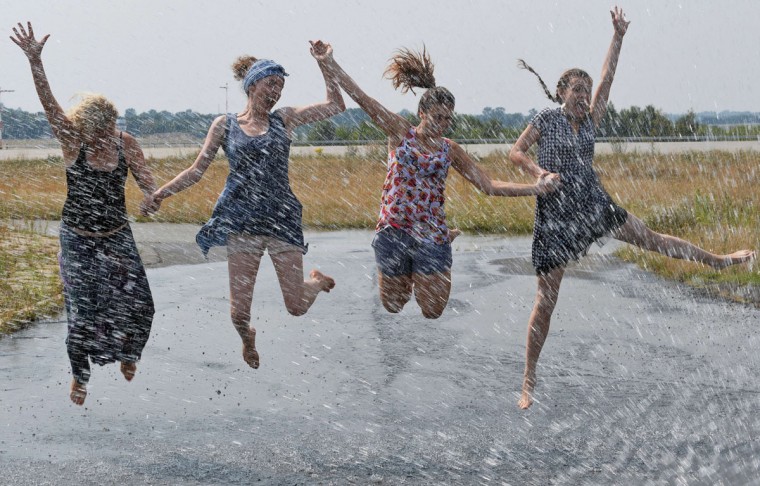 Girls who help to organize the first TPG Deafblind Race cool off in a hydrant’s water squirt on August 9, 2015, at the airport in Lodz, central Poland, as temperatures reached 35 degrees Celsius. (AFP Photo/Janek Skarzynski) 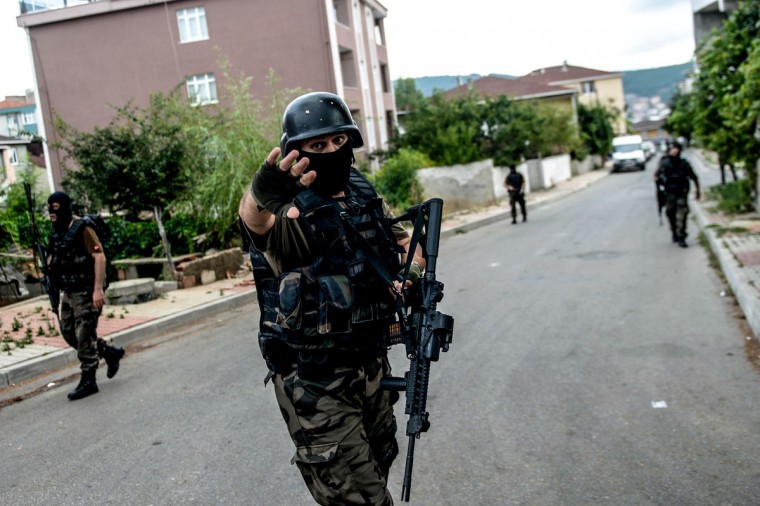 Turkish special force police officers take cover during clashes with attackers on August 10, 2015 at the Sultanbeyli district in Istanbul. Turkey’s largest city Istanbul was Monday shaken by twin attacks on the US consulate and a police station as tensions spiral amid the government’s air campaign against Kurdish militants. (AFP Photo/Ozan Kose) 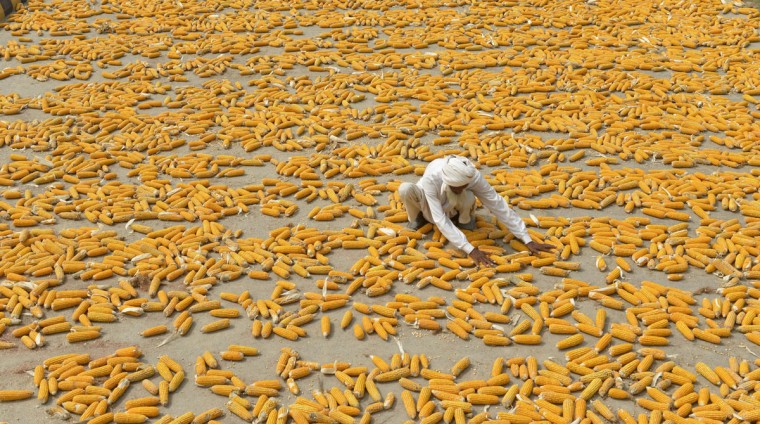 A Pakistani farmer dries his corn in a field on the outskirts of Lahore on August 9, 2015. (AFP Photo/Arif Ali) 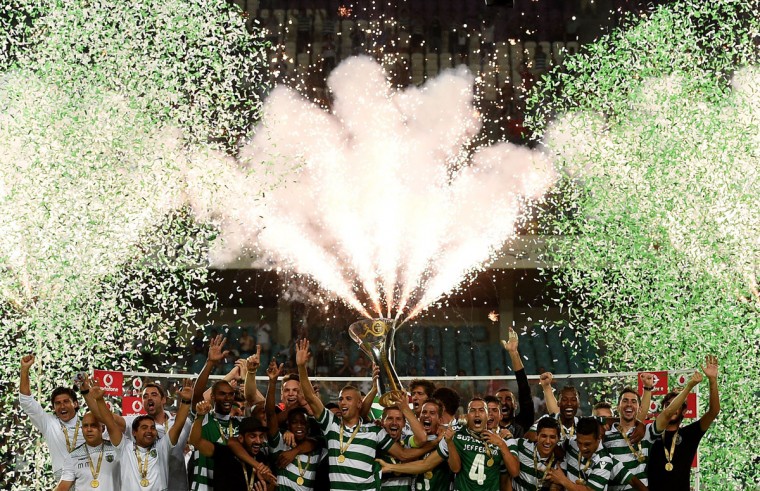 Fireworks explode as Sporting’s players raise the trophy after their 1-0 victory on the Super Cup football match SL Benfica vs SC Sporting at the Algarve stadium in Faro on August 9, 2015. (AFP Photo/Francisco Leong)