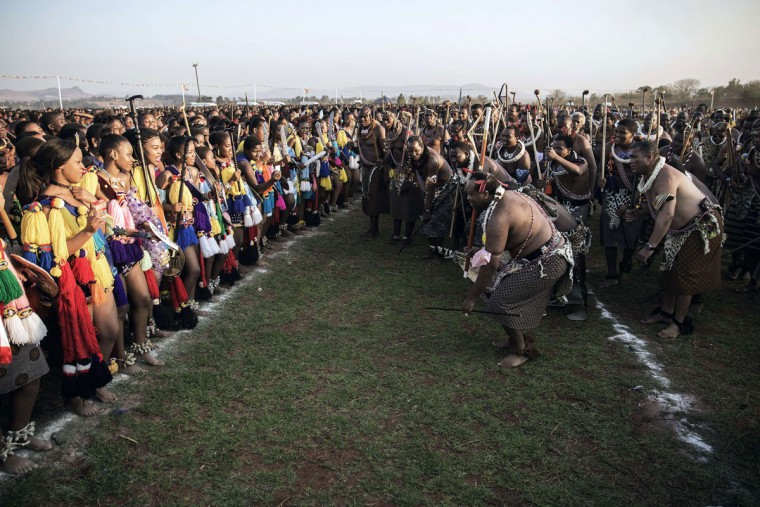 King Mswati III of Swaziland (2nd R) kneels down in atraditional show of appreciation for the maidens as they sing and dance on the last day of the annual royal Reed Dance at the Ludzidzini Royal palace on August 31, 2015 in Lobamba, Swaziland. Umhlanga, or Reed Dance ceremony, is an annual Swazi cultural event where tens of thousands of Swazi girls travel from the various chiefdoms to the Ludzidzini Royal Village to participate in the eight-day event. The Reed Dance is a beauty pageant at which King Mswati III can choose a new wife from one of tens of thousands of young virgins who come to dance before him. (AFP Photo/Gianluigi Guercia) 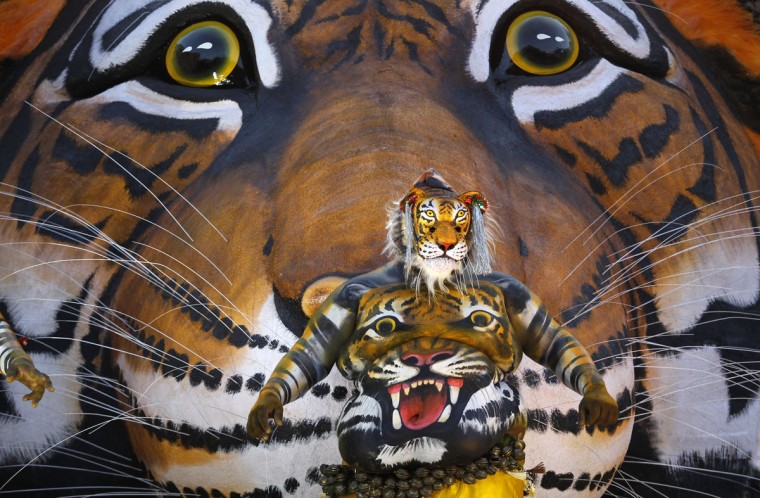 An Indian artist with his body painted with the likeness of a tiger dances before a tableau with a picture of tiger during the ‘Pulikali’ or Tiger Dance procession in Thrissur, Kerala state, India, Monday, Aug. 31, 2015. This folk art festival is held every year in this town to entertain people during the harvest festival Onam. (AP Photo/Arun Sankar K.) 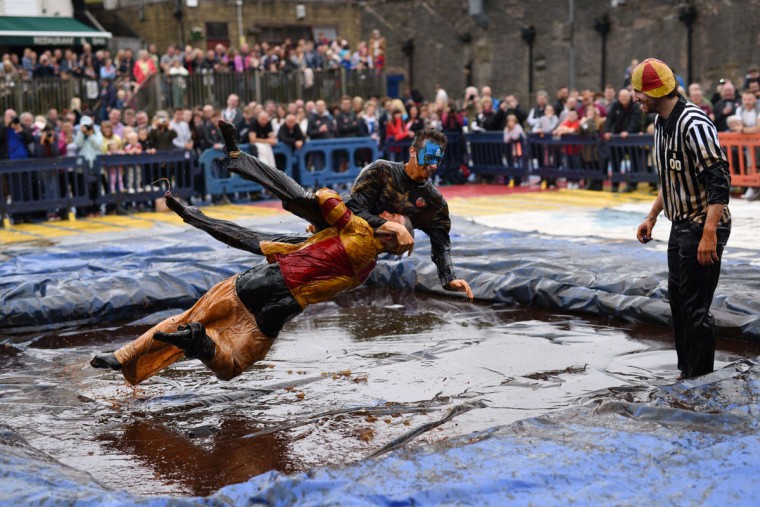 Competitors take part in the 8th annual World Gravy Wrestling Championships at the Rose n Bowl Pub in Bacup, north west England on August 31, 2015. Contestants must participate in fancy dress and wrestle in a pool of Lancashire Gravy for 2 minutes whilst being scored for a variety of wrestling moves. (AFP Photo/Oli Scarff) 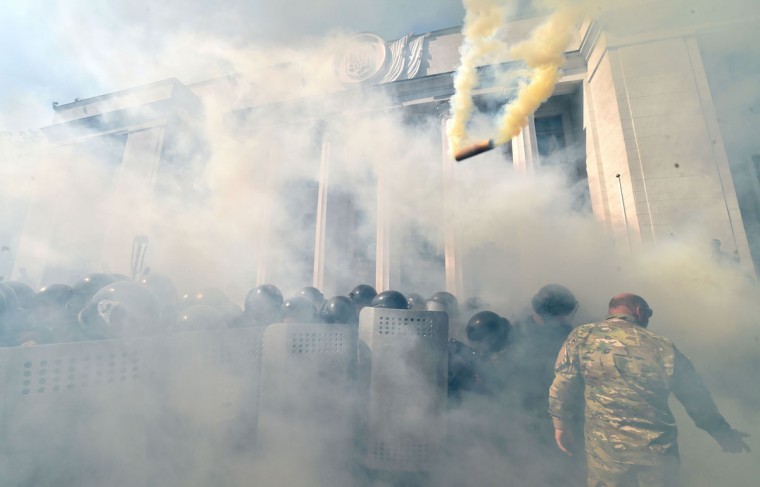 Smoke rises from the parliament building in Kiev as activists of radical Ukrainian parties, including the Ukrainian nationalist party Svoboda (Freedom), clash with police officers on August 31, 2015. At least 20 were wounded in clashes outside parliament in Kiev after lawmakers gave initial approval to constitutional changes granting more autonomy to pro-Russian separatists in eastern Ukraine. A loud blast was heard outside parliament shortly after the bill was passed, an AFP journalist said. Ukrainian interior ministry advisor and top lawmaker Anton Gerashchenko wrote on Facebook that attackers threw a hand grenade at National Guard troops guarding the building in what he called an “act of provocation.” (AFP Photo/Sergei Supinsky) 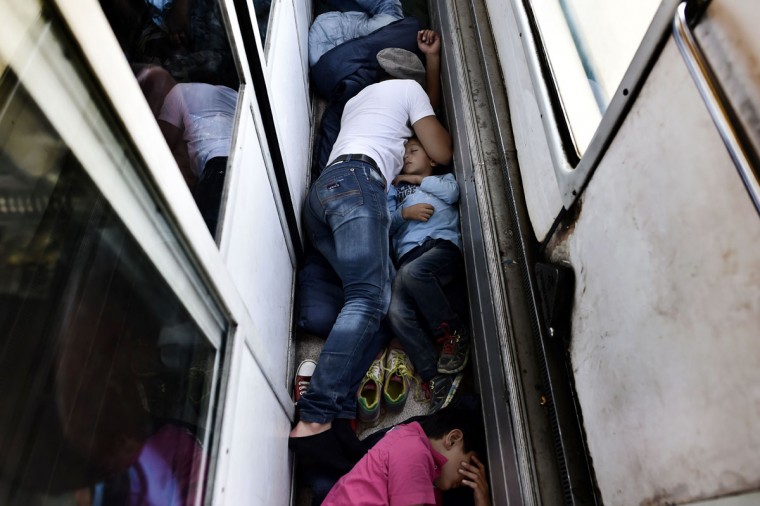 Syrian refugees and migrants sleep on the floor of a carriage as they travel on a train taking them from Macedonia (Also referred to as the Former Yugoslav Republic of Macedonia) to the Serbian border, on August 30, 2015. The EU is grappling with an unprecedented influx of people fleeing war, repression and poverty in what the bloc has described as its worst refugee crisis in 50 years. (AFP Photo/Aris Messinis) 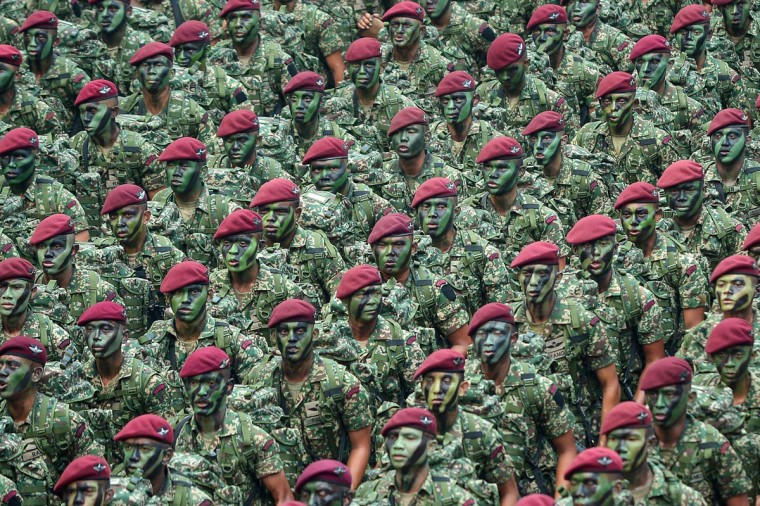 Members of Malaysia’s military parade past during National Day celebrations at Independence Square in Kuala Lumpur on August 31, 2015. Malaysia’s government reclaimed the streets of the capital on August 31 after massive weekend protests demanding the premier’s ouster, staging its own show of force with colourful National Day celebrations attended by thousands. (AFP Photo/Mohd Rasfan) 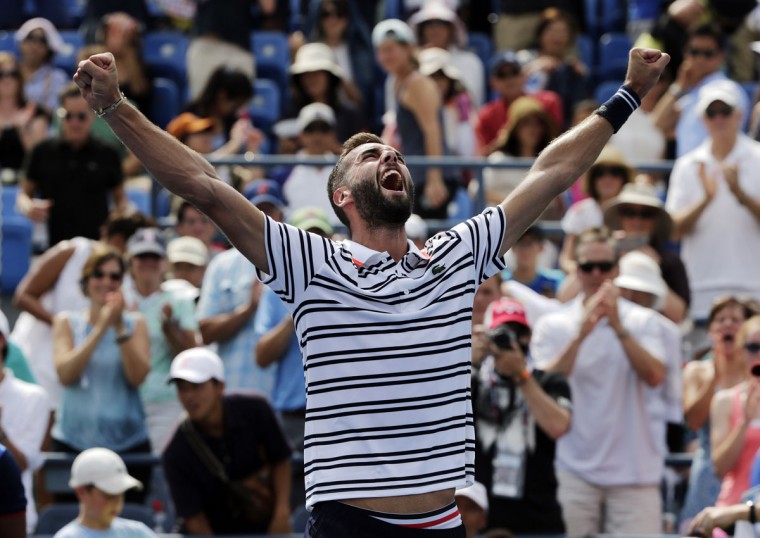 Benoit Paire, of France, reacts after defeating Kei Nishikori, of Japan, during the first round of the U.S. Open tennis tournament, Monday, Aug. 31, 2015, in New York. (AP Photo/Charles Krupa) 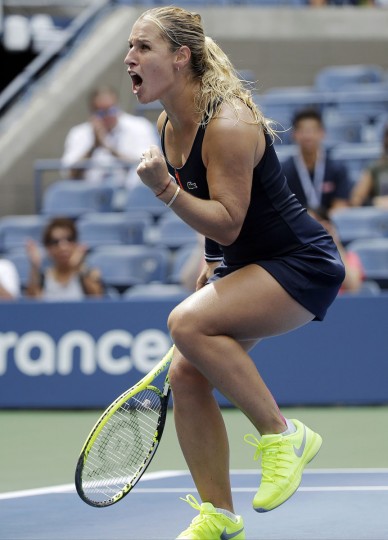 Dominika Cibulkova, of Slovakia, reacts after defeating Ana Ivanovic, of Serbia, during the first round of the U.S. Open tennis tournament, Monday, Aug. 31, 2015, in New York. (AP Photo/Matt Rourke) 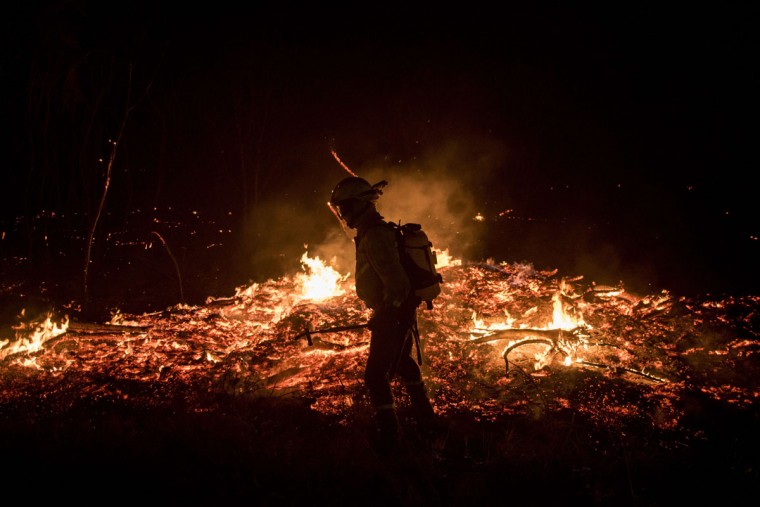 A firefighters tries to extinguish flames at the site of a wildfire in Cualedro, near Ourense on August 30, 2015. A fire broke out today around noon in the Cualedro town in Galicia, northwest Spain, affecting at least 1,000 hectares of forest, as seven fires continued to burn in Spain, three in Galicia, one in Cantabria, one in Castile and Leon, one in Catalonia and Extremadura. (AFP Photo/Pedro Armestre) 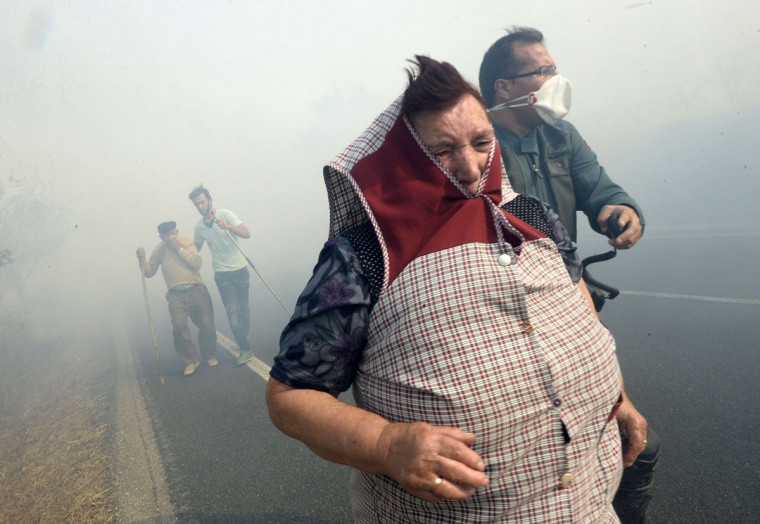 A Civil Guard helps villagers during a fire in the village of Cabreiro, some 60 km from Ourense, northwestern Spain, on August 30, 2015. (AFP Photo/Miguel Riopa) 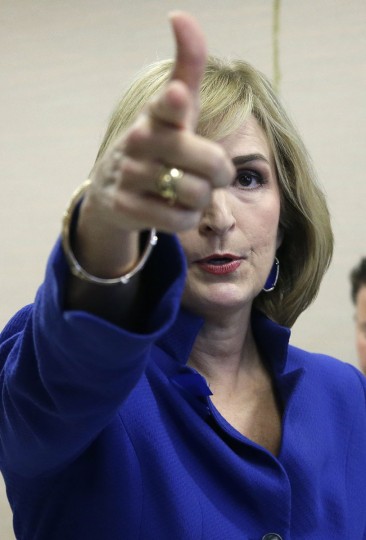 Harris County District Attorney Devon Anderson explains outside state district court, on Monday, Aug. 31, 2015, in Houston, how Sheriff’s Deputy Darren Goforth was gunned down. Shannon Miles has been charged with capital murder in the death. Miles first shot the 10-year veteran in the back of the head and fired multiple times, authorities said Monday. (AP Photo/Pat Sullivan) 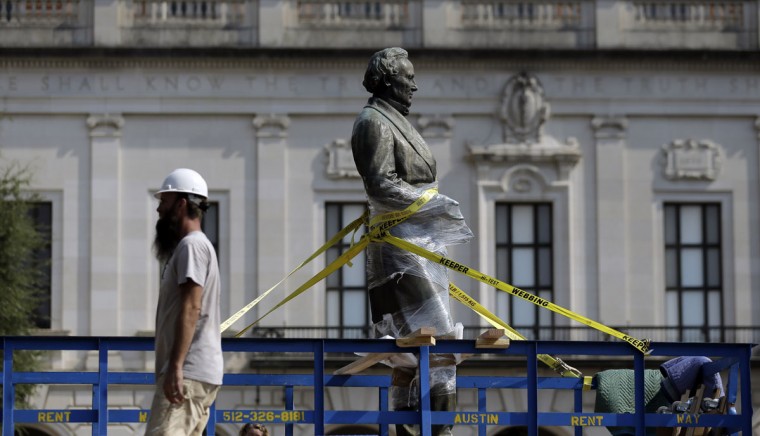 A statue of Confederate President Jefferson Davis is moved from its location in front of the school’s main tower the University of Texas campus, Sunday, Aug. 30, 2015, in Austin, Texas. The Davis statue, which has been targeted by vandals and had come under increasing criticism, will be moved and placed in the school’s Dolph Briscoe Center for American History as part of an educational display. (AP Photo/Eric Gay) 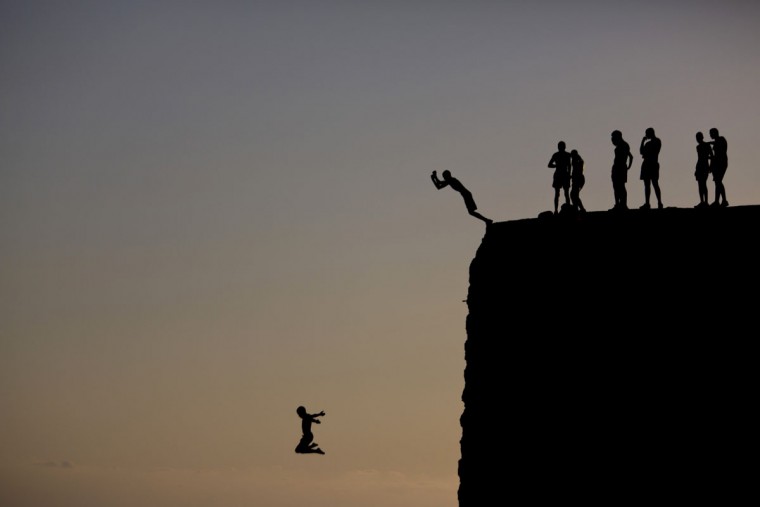 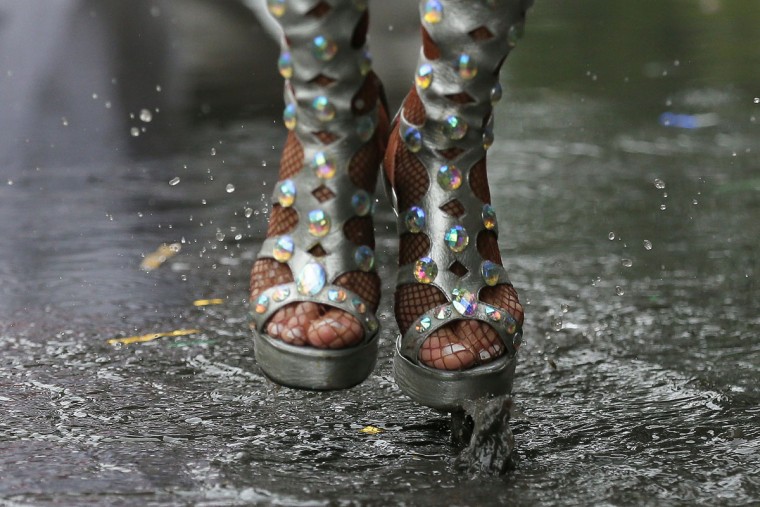 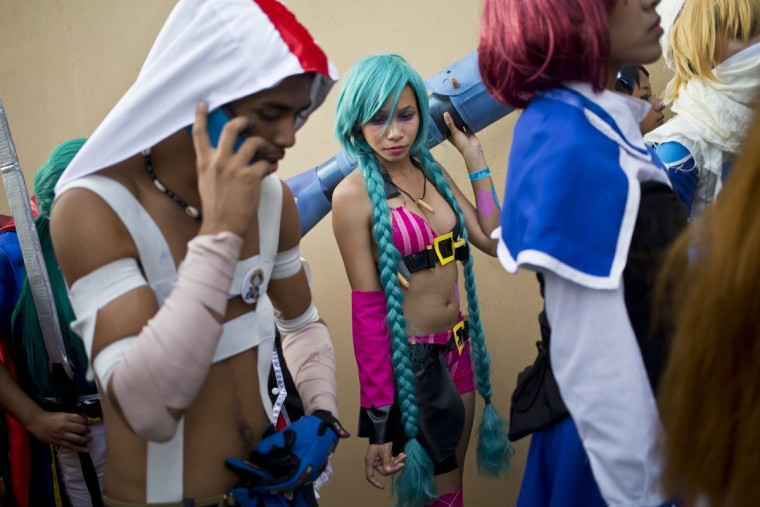 Gixell Guadamuz, dressed as League of Legends Jinx, shoulders her toy rocket launcher as she waits to take part in the parade of costumes, during the Yuukai Expo, in Managua, Nicaragua, Sunday, Aug. 30, 2015. The expo is celebrating its second annual one day event for fans of Japanese culture and anime. (AP Photo/Esteban Felix) 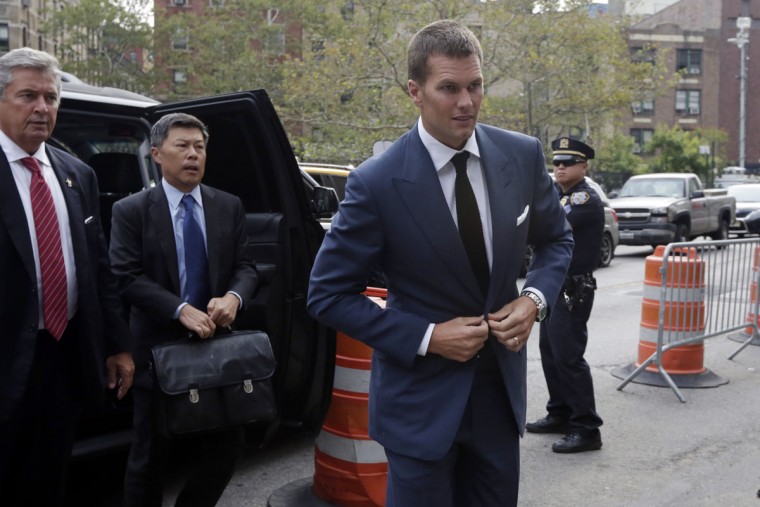 New England Patriots quarterback Tom Brady arrives at Federal court in New York, Monday, Aug. 31, 2015. Even as negotiations aimed at settling “Deflategate” drag on, lawyers are seeking every legal advantage in a quest to win over a federal judge. Repeating arguments they made at a hearing last week, lawyers are sending Judge Richard Berman letters reminding him of their legal positions. (AP Photo/Richard Drew)