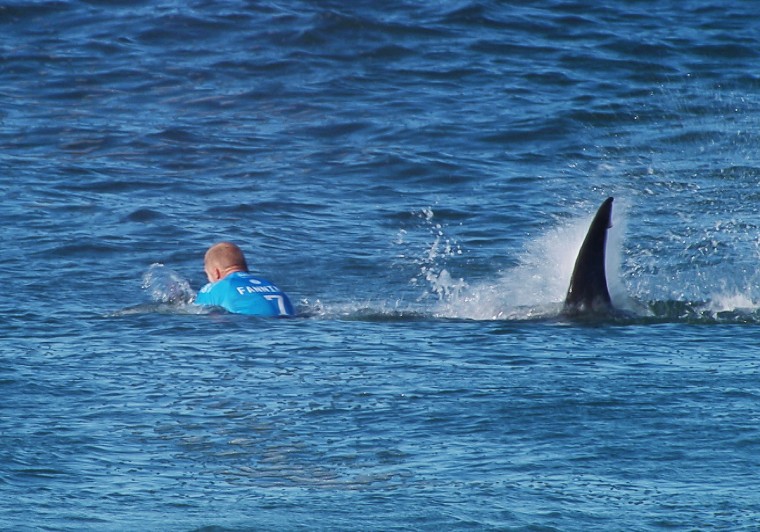 Australian surfer Mick Fanning is attacked by a shark during the Final of the JBay surf Open on Sunday July 19, 2015 in Jeffreys Bay. Mick Fanning, 34, was competing in the final heat of a world tour event at Jeffreys Bay in the country’s Eastern Cape province when a looming black fin appeared in the water behind him. He fought back against the shark, escaping from the terrifying scene without injury. (Getty Images/WSL) 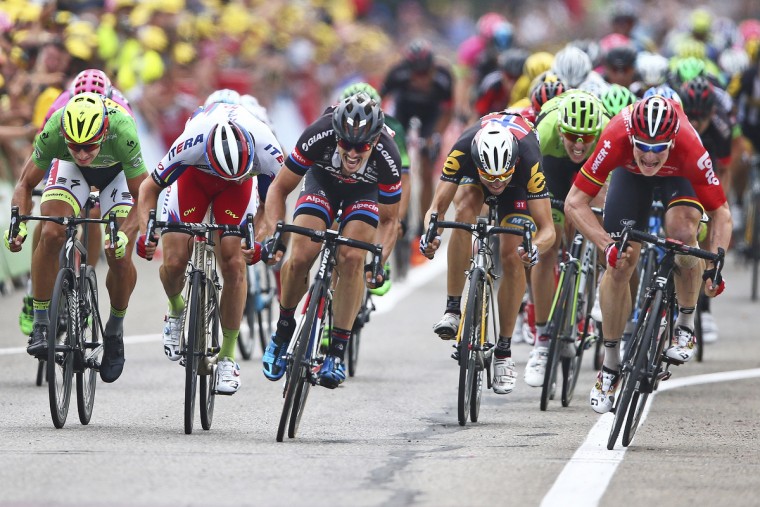 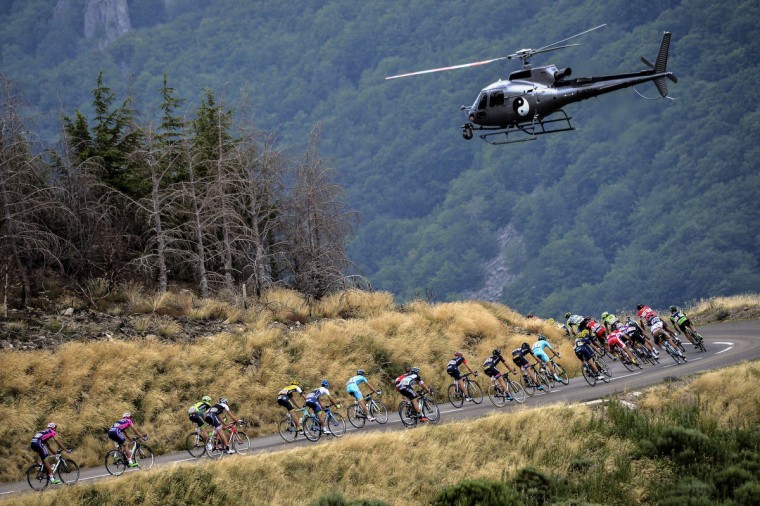 A media helicopter flies over the pack during the 183 km fifteenth stage of the 102nd edition of the Tour de France cycling race on July 19, 2015, between Mende and Valence, southern France. (Jeff Pachoud/Getty Images) 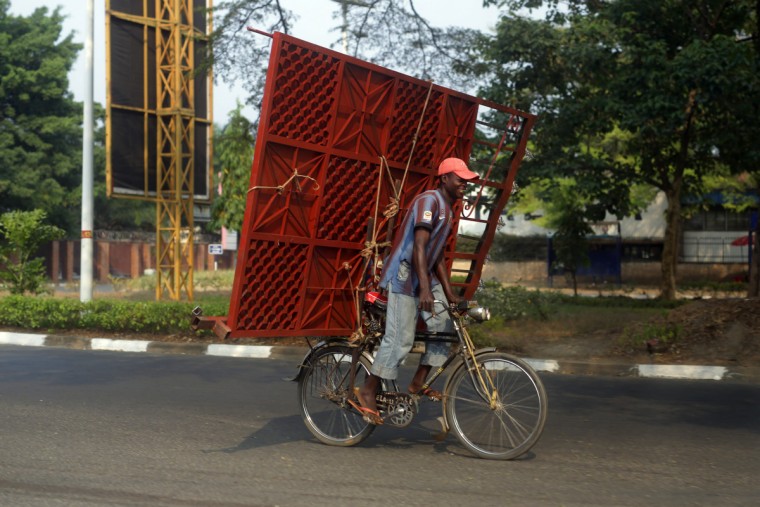 A cyclist carries a metal gate on the back of his bicycle in Bujumbura, Burundi, Sunday July 19, 2015. As Burundians are getting ready to go to the poll Tuesday July 21, three candidates, including two former presidents, announced their withdrawal from Burundi’s upcoming presidential race, predicting the contest in this restive African nation will not be free and fair. (AP Photo/Jerome Delay) 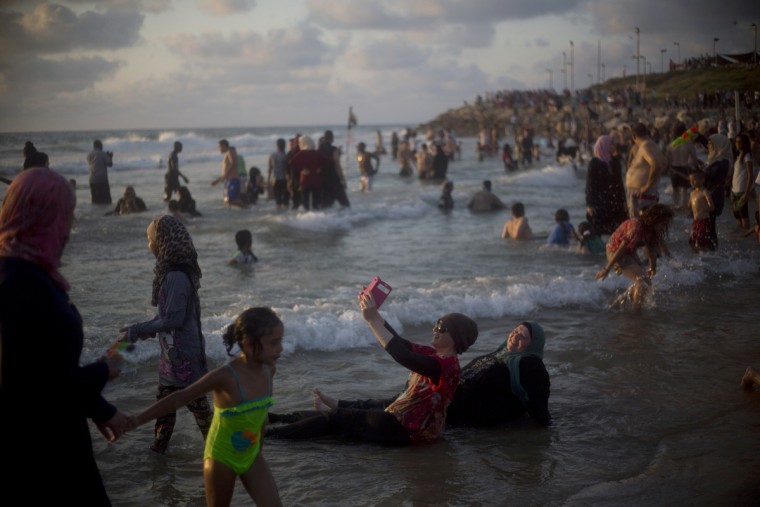 Palestinians, many of whom came from the West Bank, bathe in the Mediterranean Sea during the last day of the Eid al-Fitr holiday as the sun sets in Tel Aviv, Israel, Sunday, July 19, 2015. The three-day Eid al-Fitr holiday marks the end of the holy fasting month of Ramadan. One of the most important holidays in the Muslim world, Eid al-Fitr, is observed with prayers, family reunions and other festivities. (AP Photo/Ariel Schalit) 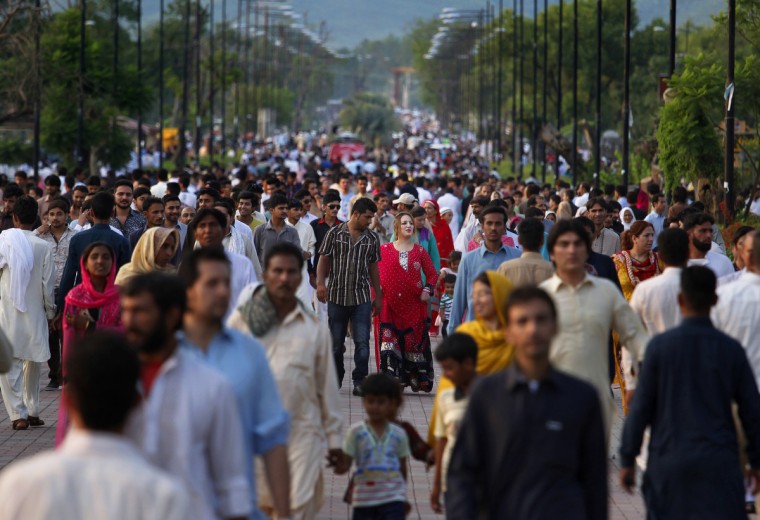 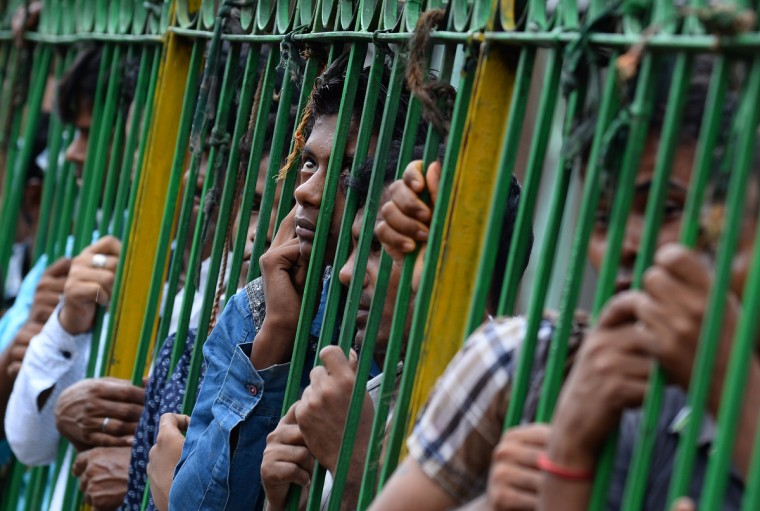 Indian neighbors watch personnel of the National Disaster Response Force (NDRF) as they clear the rubble of a collapsed four-story building in New Delhi on July 19, 2015. Rescuers in the Indian capital scrambled to find a little girl in the ruins of a four-story building after its collapse killed four people and injured several, with a senior police official citing faulty drainage repair work in the neighbourhood and rain for weakening the building. (Sajjad Hussain/Getty Images) 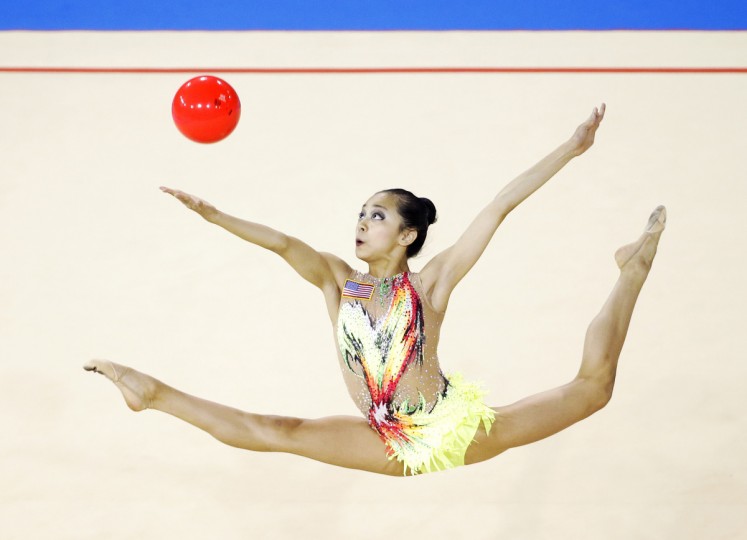 Laura Zeng, of the United States, performs in the rhythmic gymnastics competition at the Pan Am Games Sunday, July 19, 2015, in Toronto. (AP Photo/Mark Humphrey) 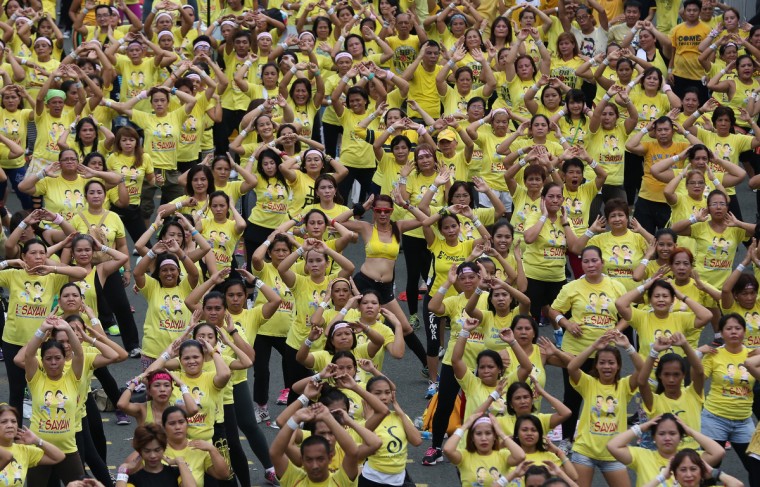 Filipinos dance during a Zumba class as they attempt to break a Guinness world record in suburban Mandaluyong, east of Manila, Philippines Sunday, July 19, 2015. Guinness representative Alan Pixley announced that Mandaluyong city in the Philippines now holds the new world record for the title largest Zumba class with a total participant of 12,975. (AP Photo/Aaron Favila) 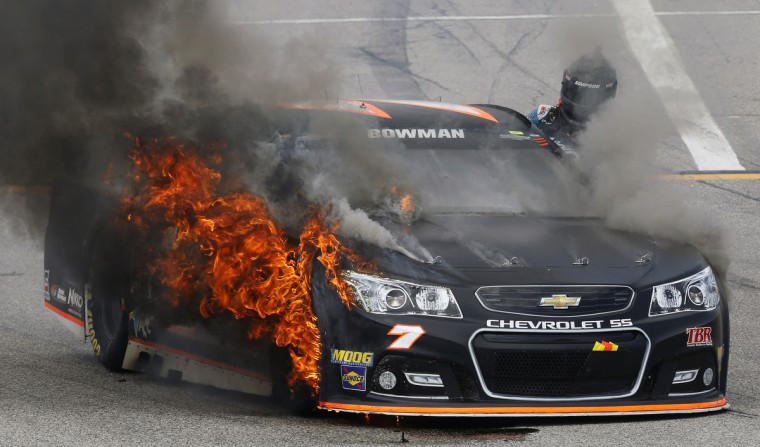 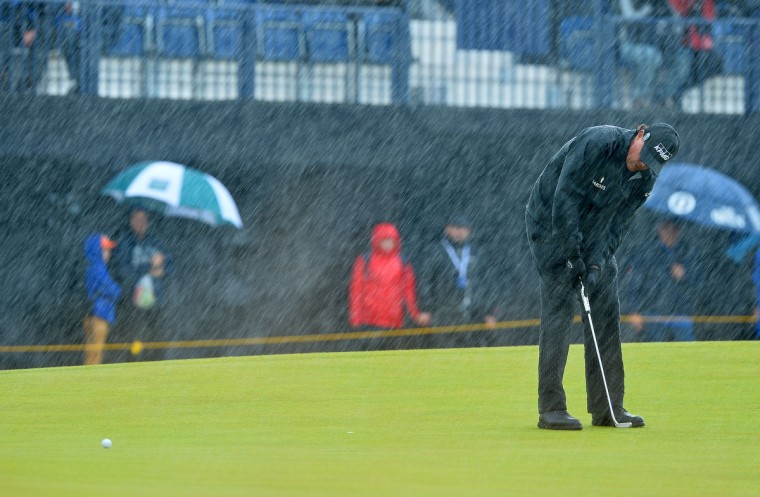 US golfer Phil Mickelson putts in the rain on the 5th green during his third round 70, on day four of the 2015 British Open Golf Championship on The Old Course at St Andrews in Scotland, on July 19, 2015. Friday’s high winds, which forced organizers to announce only the second Monday finish to the tournament in its history, gave to cool, rainy weather as play in the third round started on Sunday. (Glyn Kirk/Getty Images) 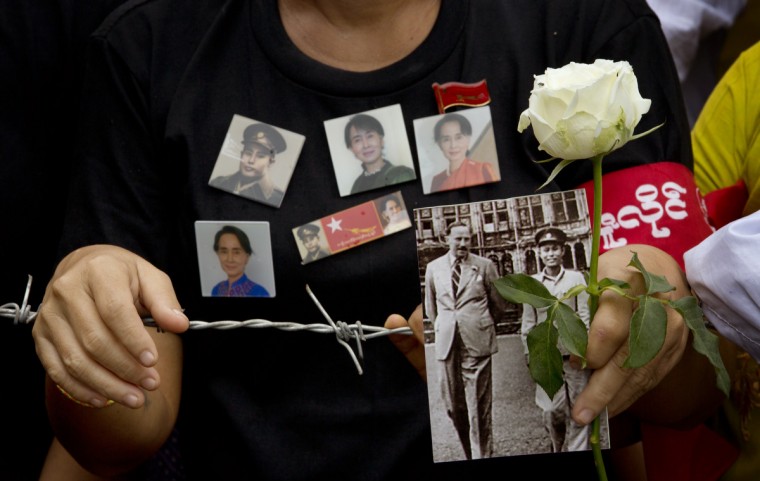 A woman holds a picture of Gen. Aung San and a white rose at a barricade leading to Martyrs’ Mausoleum in Yangon, Myanmar, Sunday, July 19, 2015. Hundreds of people gathered to pay respect at the tomb of Myanmar’s Independence hero and opposition leader Aung San Suu Kyis father, Aung San to mark the 68th anniversary of his 1947 assassination. (AP Photo/Gemunu Amarasinghe) 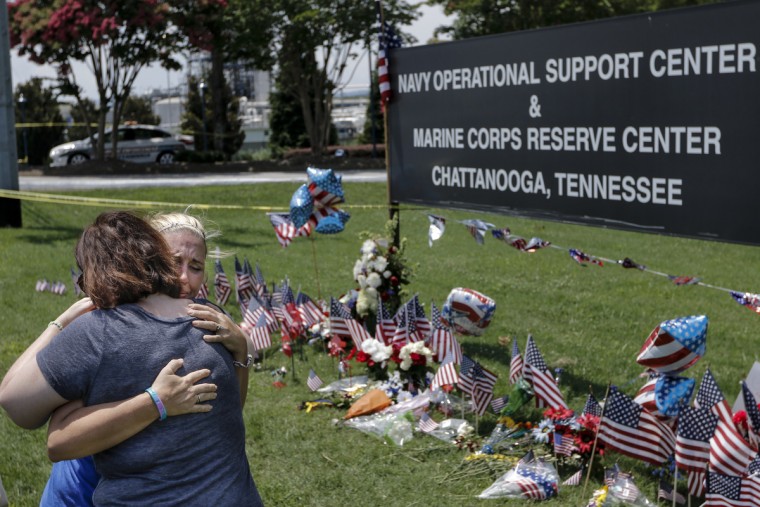 Sophia Ensley, right, and Barbie Branum embrace in front of a makeshift memorial at the Navy Operational Support Center and Marine Corps Reserve Center, Saturday, July 18, 2015, for the victims of the July 16 shootings in Chattanooga, Tenn. The U.S. Navy says a sailor who was shot in the attack on a military facility in Chattanooga has died, raising the death toll to five people. (Doug Strickland/Chattanooga Times Free Press via AP) 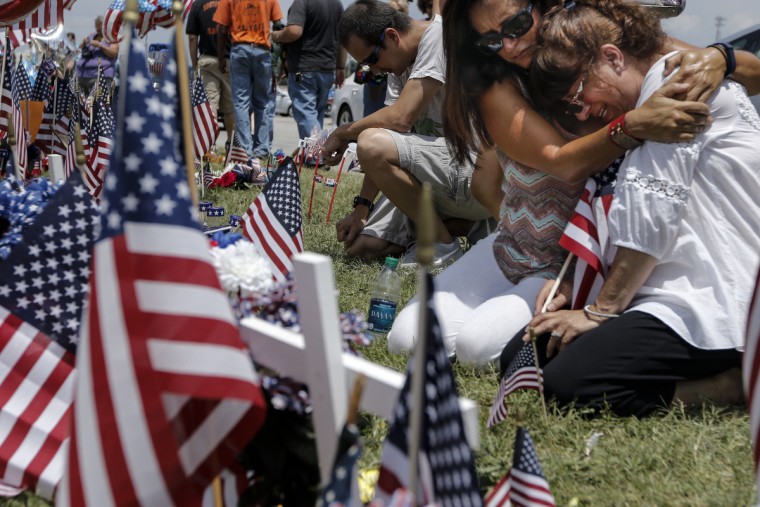 Two women mourn at a makeshift memorial near the Armed Forces Career Center, Saturday, July 18, 2015, for the victims of the July 16 shootings in Chattanooga, Tenn. The U.S. Navy says a sailor who was shot in the attack on a military facility in Chattanooga has died, raising the death toll to five people. (Doug Strickland/Chattanooga Times Free Press via AP) 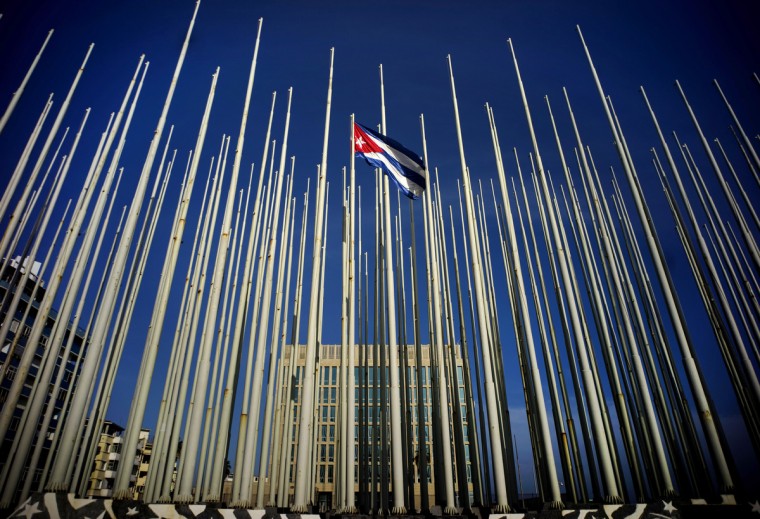 A Cuban flag flies among empty flag polls near the U.S. Interests Section building, behind, in Havana, Sunday, July 19, 2015. Washington and Havana plan to officially restore diplomatic relations on Monday with the reopening of their embassies. While no formal ceremony is planned Monday for the U.S. Interests Section in Havana, it too will become a full-fledged embassy just after midnight as the Cold War foes formally enter a new era of engagement. (AP Photo/Ramon Espinosa) 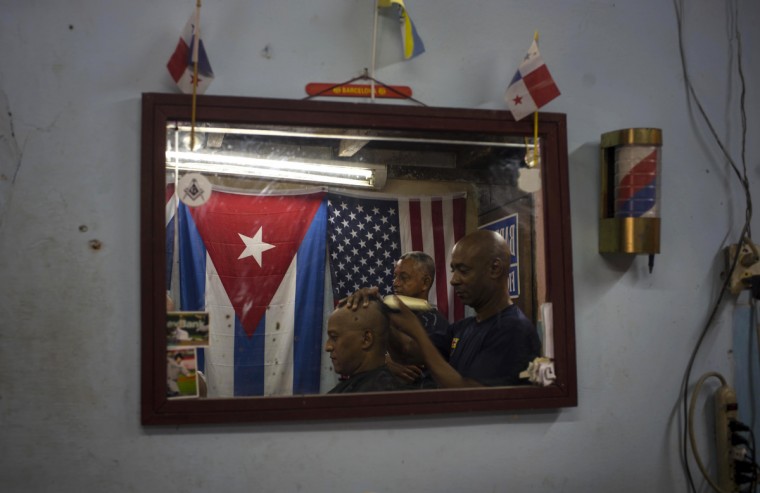 Eugenio Lafargue is reflected in a mirror as he cuts a client’s hair inside his barbershop decorated with a Cuban and U.S. flag in Havana, Cuba, Saturday, July 18, 2015. Washington and Havana plan to officially restore diplomatic relations on Monday with the reopening of their embassies. (AP Photo/Ramon Espinosa) 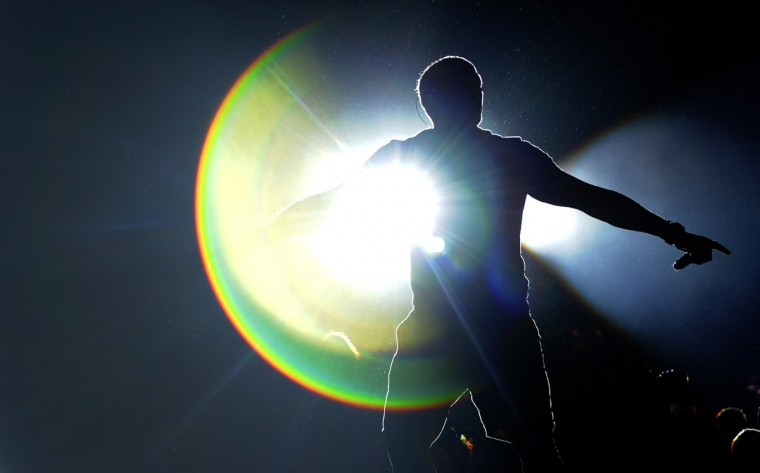 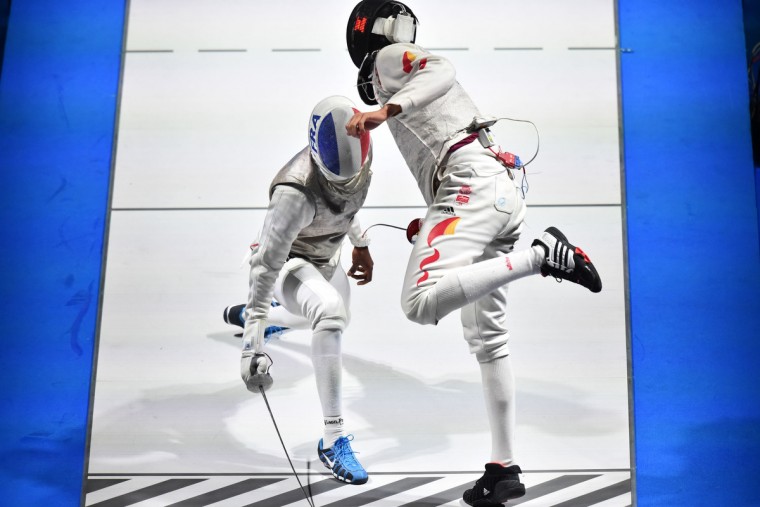 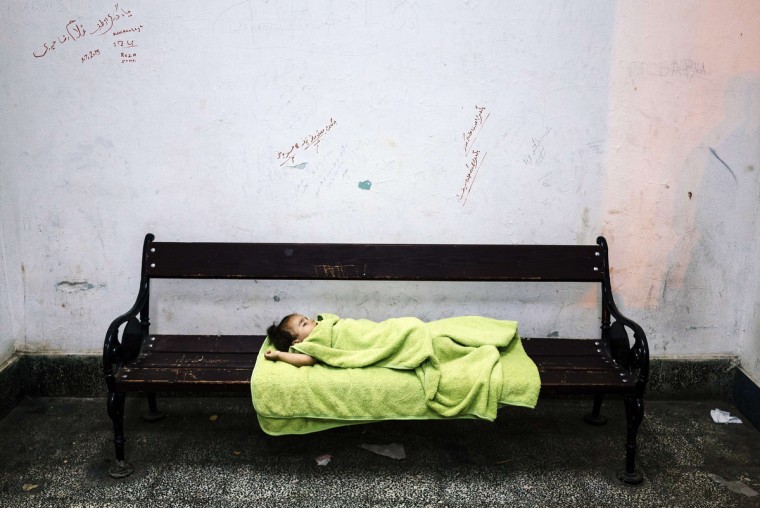 The baby of Syrian migrants sleeps in the waiting room of the trade station of the southern Serbian town of Presevo, near the border with Macedonia on July 16, 2015. Illegal immigrants cross into Serbia on their way to other European countries as it has land access to three members of the 28-nation bloc — Romania, Hungary and Croatia. The number of people apprehended crossing the Serbia-Hungary border alone has risen by more than 2,500 percent since 2010 — from 2,370 to 60,602, Amnesty International said in a report. (Dimitar Kilkoff/Getty Images) 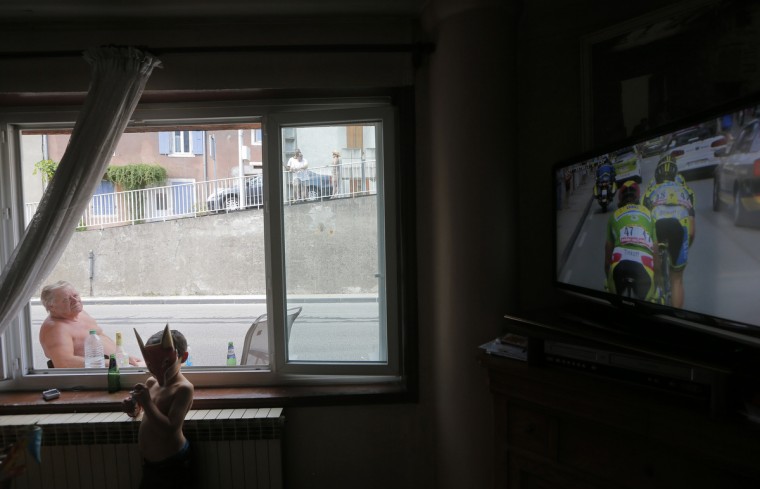 A man waits outside his house for the riders to pass while a child wearing a mask plays inside during the fifteenth stage of the Tour de France cycling race over 183 kilometers (113.7 miles) with start in Mende and finish in Valence, France, Sunday, July 19, 2015. (AP Photo/Christophe Ena)