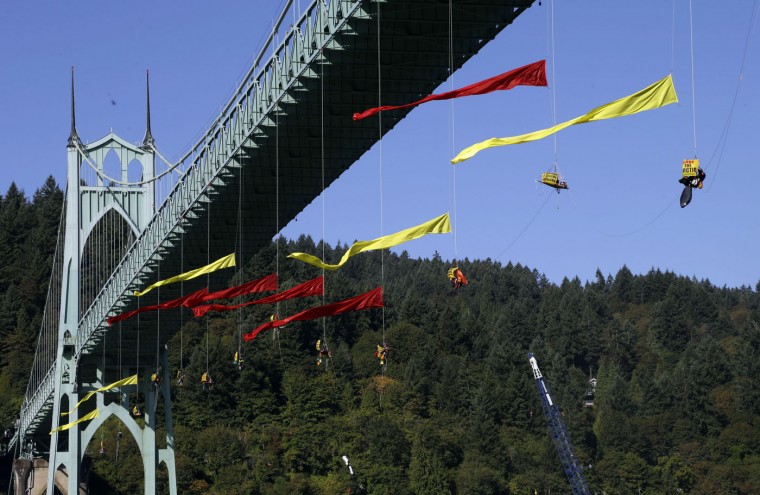 Activists hang from the St. Johns bridge in an effort to block the Royal Dutch Shell PLC icebreaker Fennica from leaving for Alaska in Portland, Ore., Thursday, July 30, 2015. The icebreaker, which is a vital part of Shell’s exploration and spill-response plan off Alaska’s northwest coast, stopped short of the hanging blockade, turned around and sailed back to a dock at the Port of Portland. (AP Photo/Don Ryan) 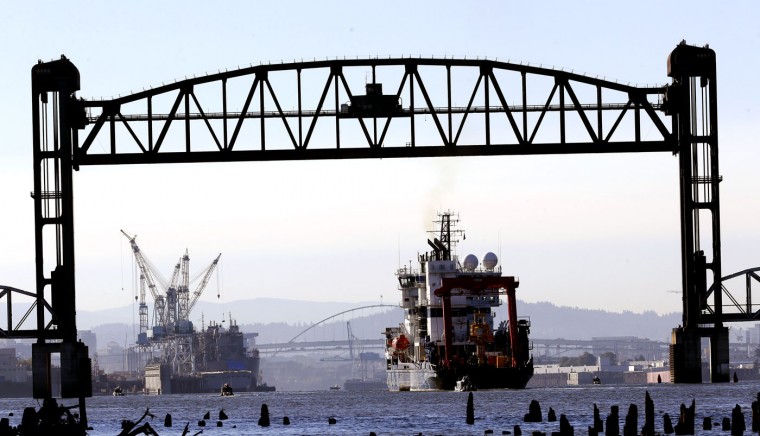 Royal Dutch Shell PLC icebreaker Fennica heads back to the Portland of Portland, at left, after it was blocked on its way to Alaska by activists hanging from the St. Johns bridge in Portland, Ore., Thursday, July 30, 2015. The icebreaker is a vital part of Shell’s exploration and spill-response plan off Alaska’s northwest coast. Environmental activists on St. Johns Bridge and kayakers on the Willamette River below have been blocking the icebreaker from heading to the Arctic for a drill operation. (AP Photo/Don Ryan) 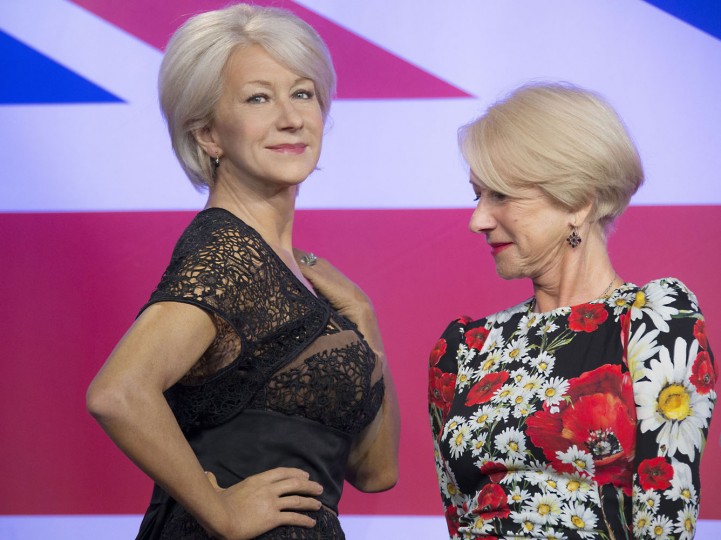 British actress Helen Mirren looks at one of three wax figures of herself, made in celebration of her recent 70th birthday, at Madame Tussauds in central London, Thursday, July 30, 2015. (Joel Ryan/Invision/AP) 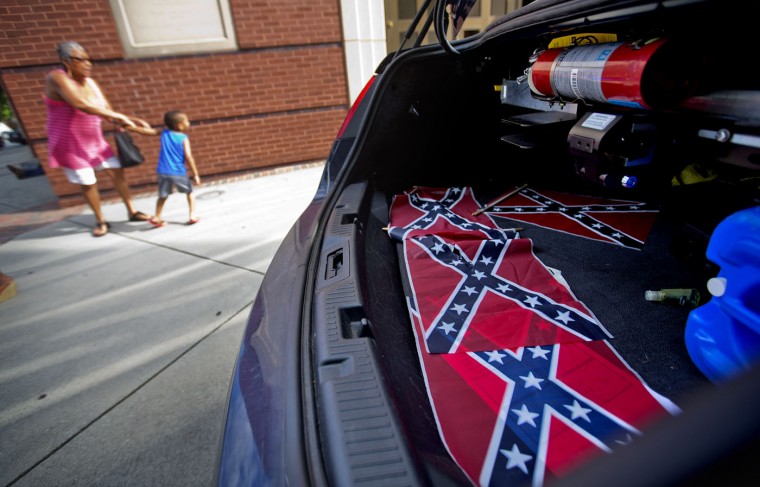 Confederate flags sit in the back of a police car as tourists walk by Ebenezer Baptist Church Thursday, July 30, 2015, in Atlanta. U.S. authorities are investigating after several Confederate battle flags were discovered near the church and a civil rights center named after Martin Luther King, an iconic leader in the African-American Civil Rights Movement, Thursday morning. (AP Photo/David Goldman) 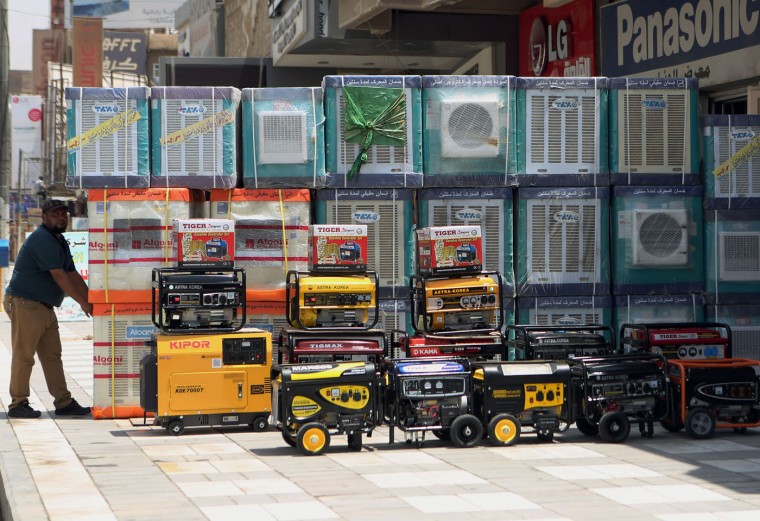 Air conditioners and power generators are displayed on a street in central Baghdad, Iraq, Thursday, July 30, 2015. Scorching temperatures are normal this time of year, but an unprecedented heat wave prompted Iraqi authorities to declare a mandatory four-day holiday beginning Thursday. For some Iraqis, heat waves mean big business. With rampant power cuts, some generators, which could sell anywhere from $200 to $800, are flying off the shelves. (AP Photo/ Khalid Mohammed) 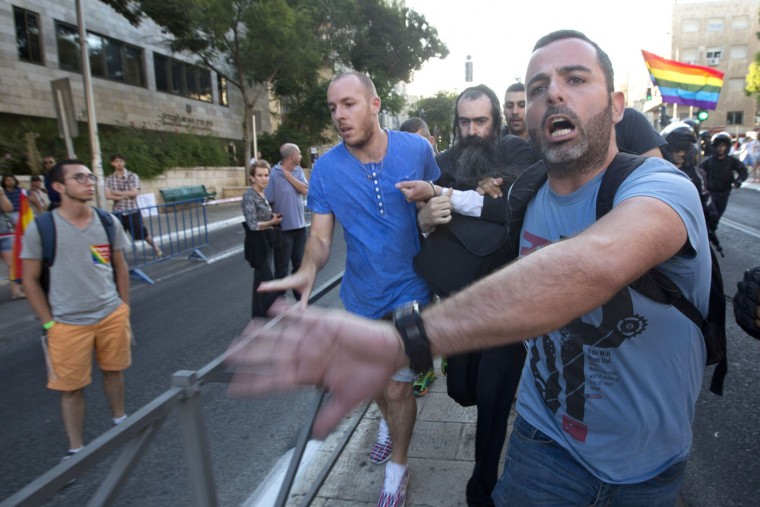 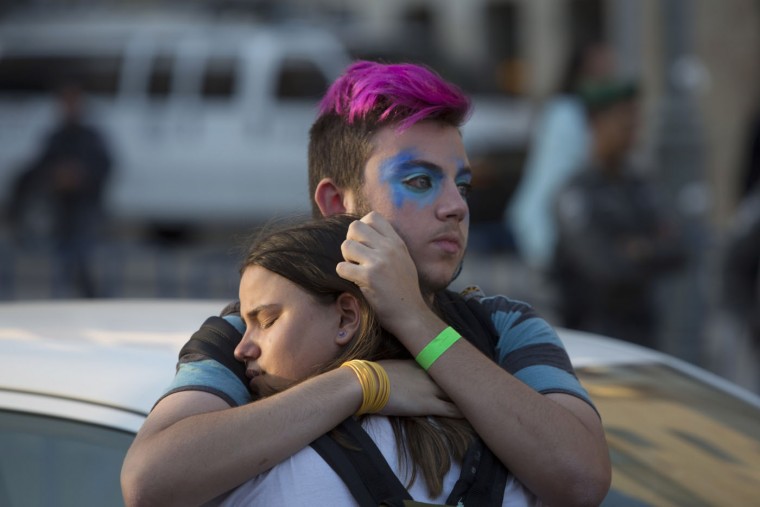 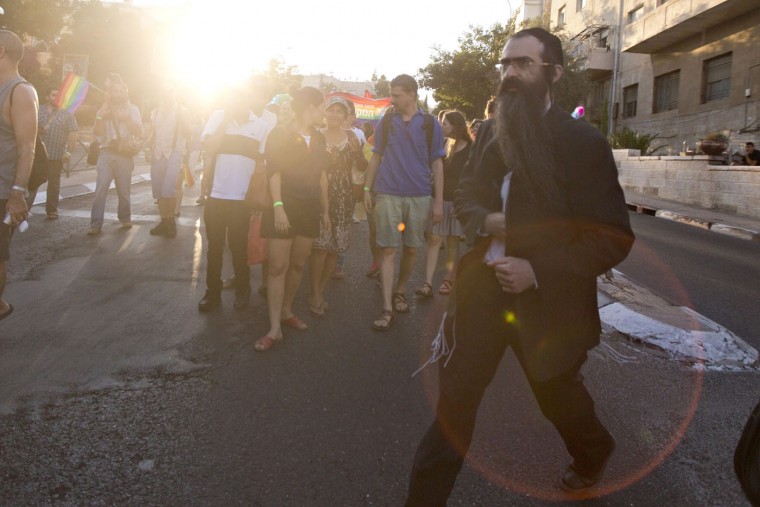 Ultra-Orthodox Jew Yishai Schlissel walks through a Gay Pride parade and is just about to pull a knife from under his coat and start stabbing people in Jerusalem Thursday, July 30, 2015. Schlissel was recently released from prison after serving a term for stabbing several people at a gay pride parade in 2005, a police spokeswoman said.(AP Photo/Sebastian Scheiner) 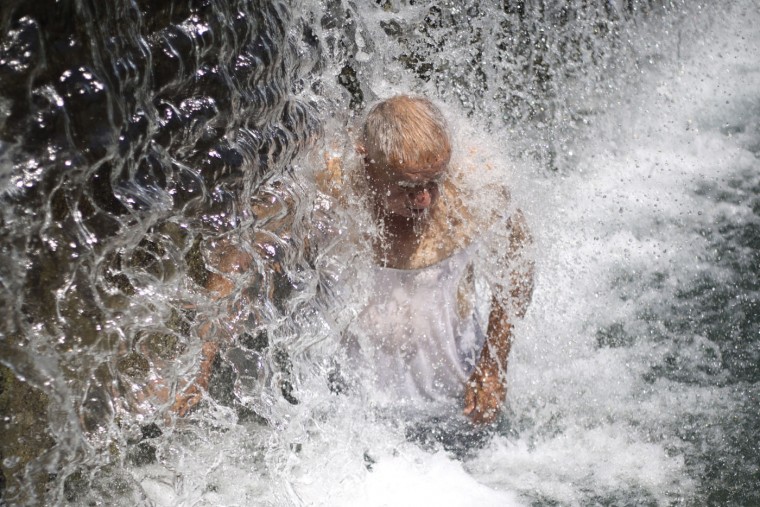 An Arab man cools off under a waterfall at the Gan HaShlosha national park near the northern Israeli town of Beit Shean in Israel on Thursday, July 30, 2015. The temperature there reached 37 degrees Celsius (98.6 F). (AP Photo/Ariel Schalit) 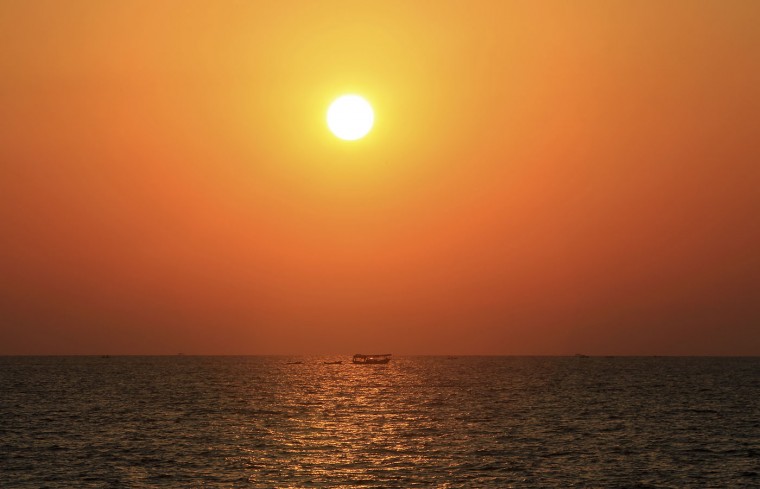 Palestinian fishermen sail into waters of the Mediterranean Sea at sunset in Gaza in the northern Gaza Strip on Thursday, July 30, 2015. (AP Photo/Adel Hana) 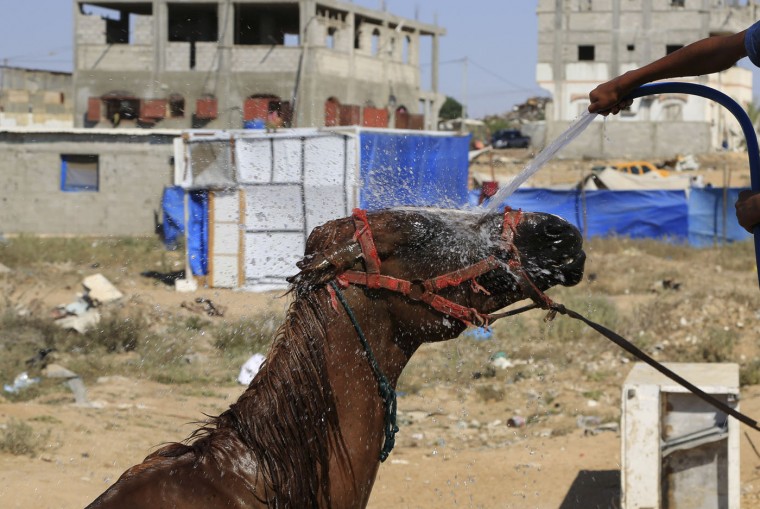 Mohammed al-Masri cools off his family horse near the ruins their house, which was destroyed in the last summer’s Israel-Hamas war, in Beit Hanoun, in the northern Gaza Strip, Thursday, July 30, 2015, where the high temperature was 36 degrees Celsius (97F). Chronic electricity and water cuts in conflict-ridden countries make heat waves like the present one even more unbearable  particularly for the more than 14 million people displaced by violence across the Middle East region. (AP Photo/Adel Hana) 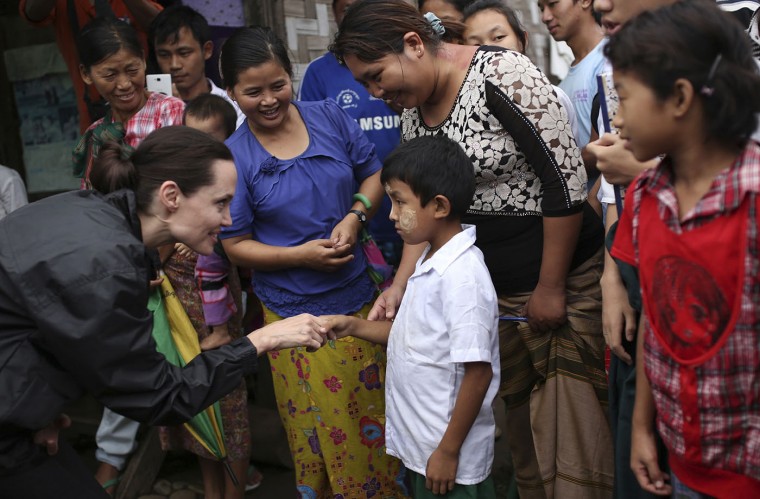 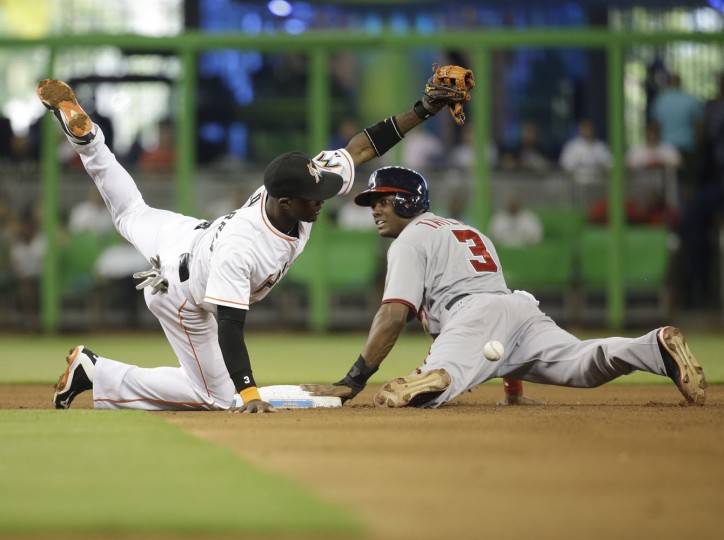 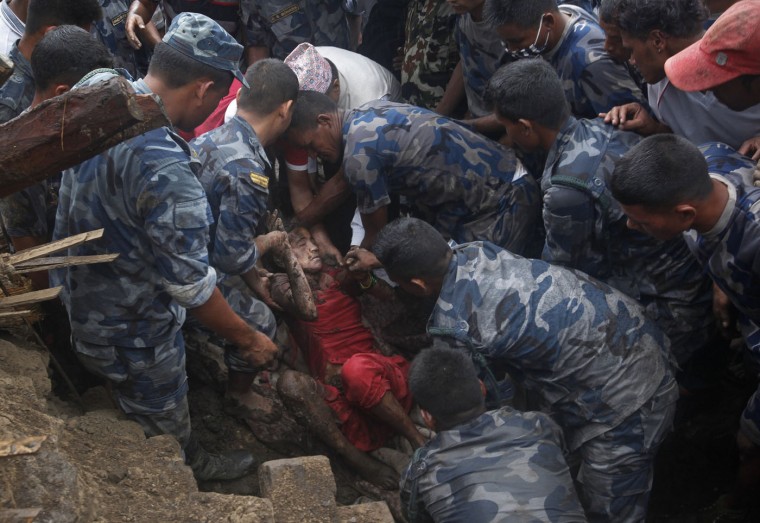 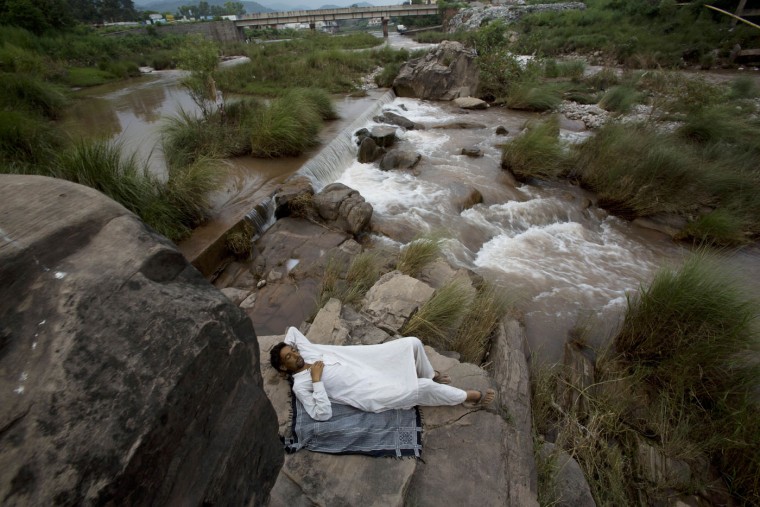 A Pakistani man takes a nap at waterside during a hot afternoon in Islamabad, Pakistan, July 30, 2015. (AP Photo/B.K. Bangash) 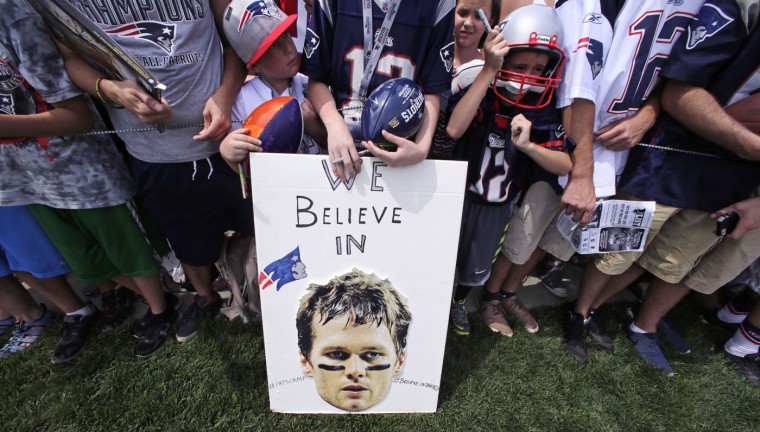 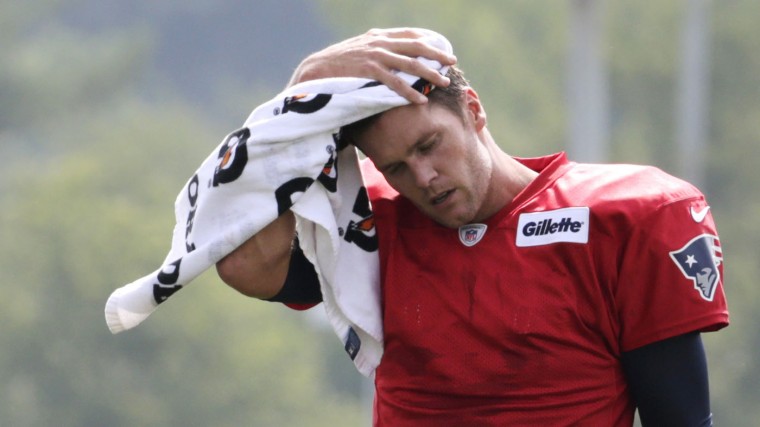 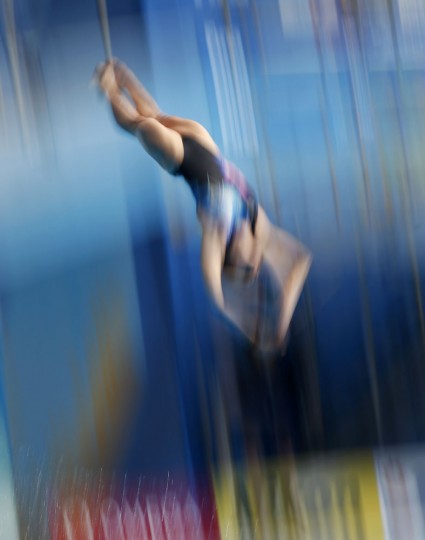 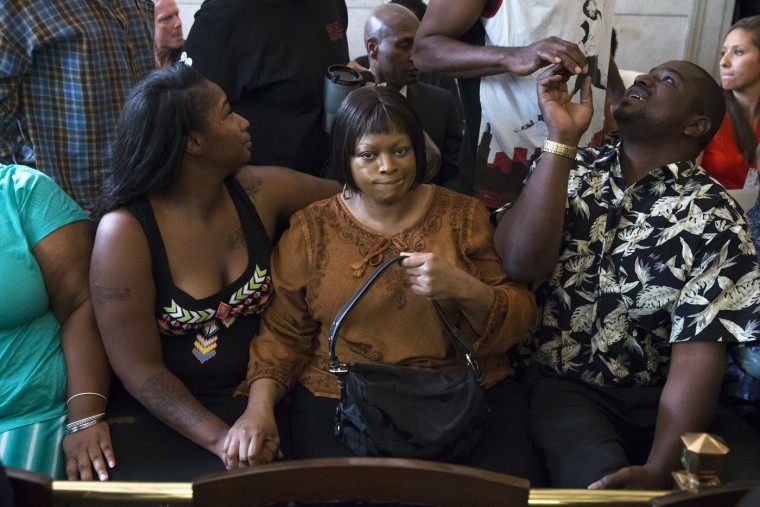 Terina Allen, sister of Samuel DuBose, sits with family members as she reacts in the courtroom following the arraignment of former University of Cincinnati police officer Ray Tensing at Hamilton County Courthouse for the shooting death of motorist DuBose, Thursday, July 30, 2015, in Cincinnati. Tensing, who was indicted and fired from his job on Wednesday, shot and killed Dubose on July 19. Tensing pleaded not guilty to charges of murder and involuntary manslaughter. (AP Photo/John Minchillo) 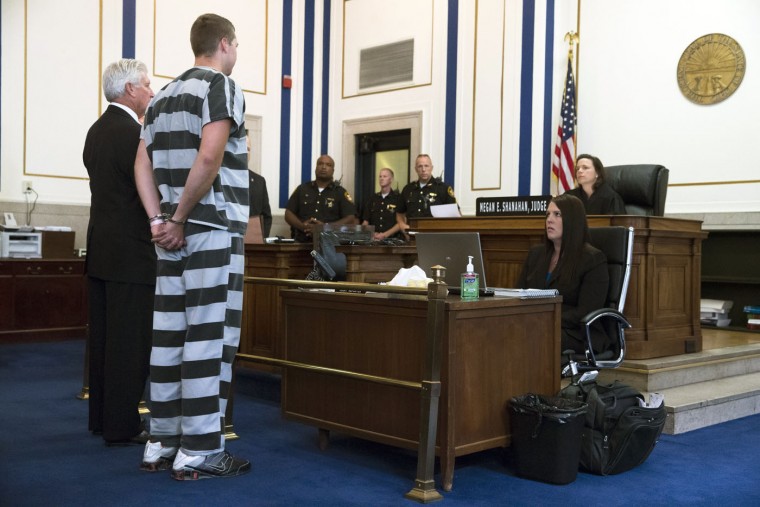 « Inside Baltimore’s jail through the years » This week in history… Michael Phelps, Jimmy Hoffa and MTV