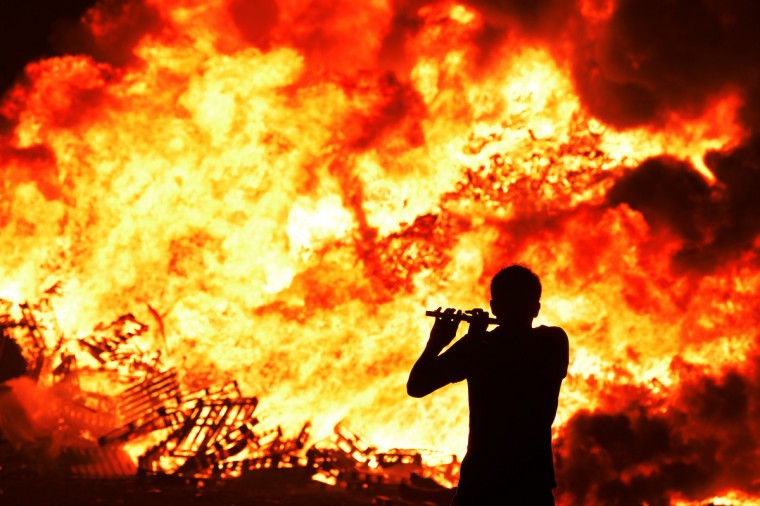 Iain McFarland, an Orange bandsman, plays his flute during the 11th night bonfire at the New Mossley housing estate on July 12, 2015 in Belfast, Northern Ireland. New Mossley is widely recognised as the largest bonfire in the province. Tradition holds that the bonfires commemorate the lighting of fires on the hills to help Williamite ships navigate through Belfast Lough at night when Protestant King William III and his forces landed at Carrickfergus to fight the Catholic Jacobites, supporters of the exiled Catholic King James II. The bonfires also mark the beginning of the annual 12th of July Orange parades. (Charles McQuillan/Getty Images)

A woman walks through fountain spray with children as they cool down in a fountain beside the Manzanares river in Madrid, Spain, Sunday, July 12, 2015. One person has reportedly died of heat stroke in Spain and Madrid’s emergency service says it has seen 11 other cases in the last 24 hours as Spain swelters under a prolonged heat wave. Spain’s meteorological agency issued a warning Saturday saying temperatures would continue to be as high as 104 degrees Fahrenheit (40 degrees centigrade) until at least July 16, describing the heat wave as “unusually long.” (AP Photo/Oscar del Pozo) 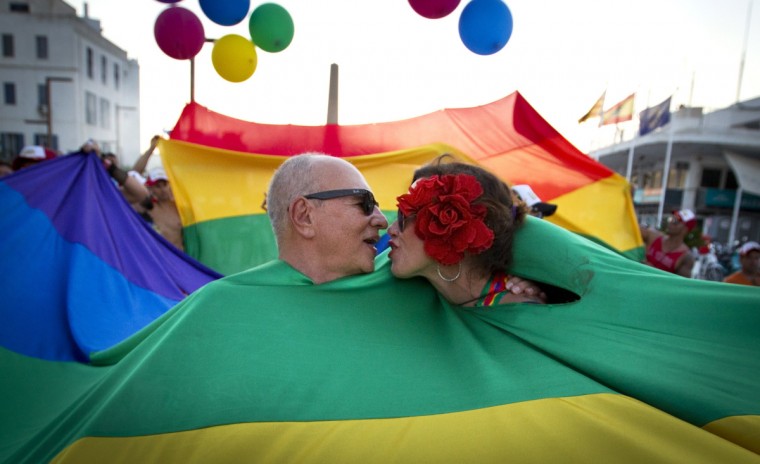 Two revelers kiss in a rainbow flag during the Gay Pride Parade in Ibiza on July 11, 2015. (Jaime Reina/Getty Images) 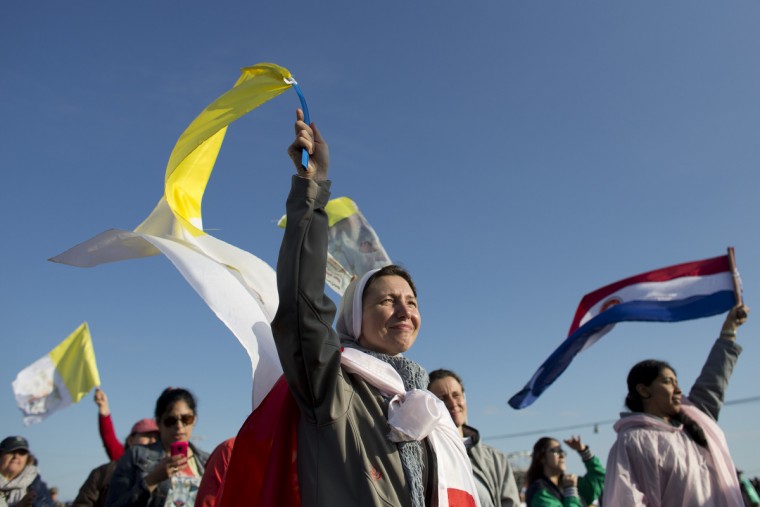 Nuns from Paraguay and Poland wave flags and sing as they wait for Pope Francis to celebrate mass in Asuncion, Paraguay, Sunday, July 12, 2015. Hundreds of thousands gathered on a huge swampy and muddy field called Nu Guazu inside a military base to attend the mass. (AP Photo/Victor R. Caivano) 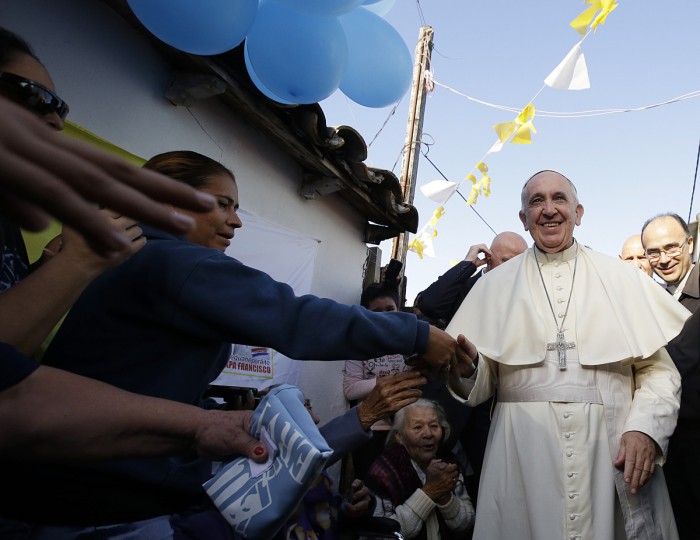 Pope Francis is greeted by the faithful during his visit to the Banado Norte neighborhood in Asuncion, Paraguay, Sunday, July 12, 2015. Pope Francis began the last day of a weeklong South American tour with a stop to the Asuncion slum that borders the Paraguay river that frequently floods it and makes its dirt roads impassable pools of mud. (AP Photo/Gregorio Borgia, Pool) 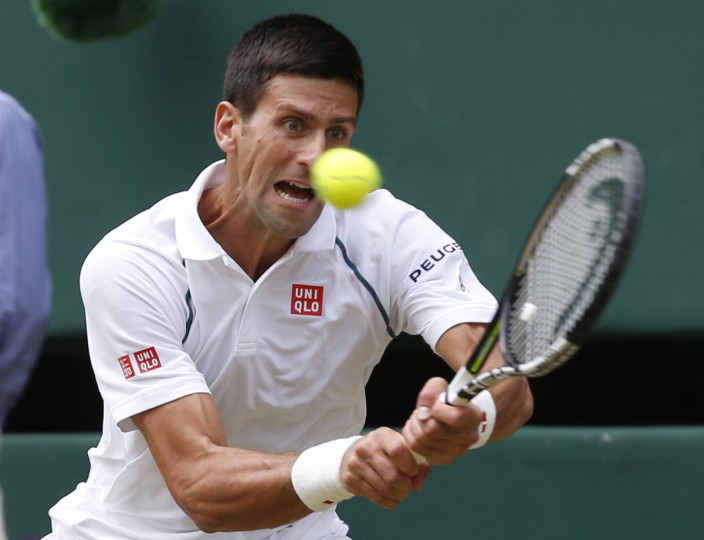 Novak Djokovic of Serbia plays a return to Roger Federer of Switzerland during the men’s singles final at the All England Lawn Tennis Championships in Wimbledon, London, Sunday July 12, 2015. (AP Photo/Alastair Grant) 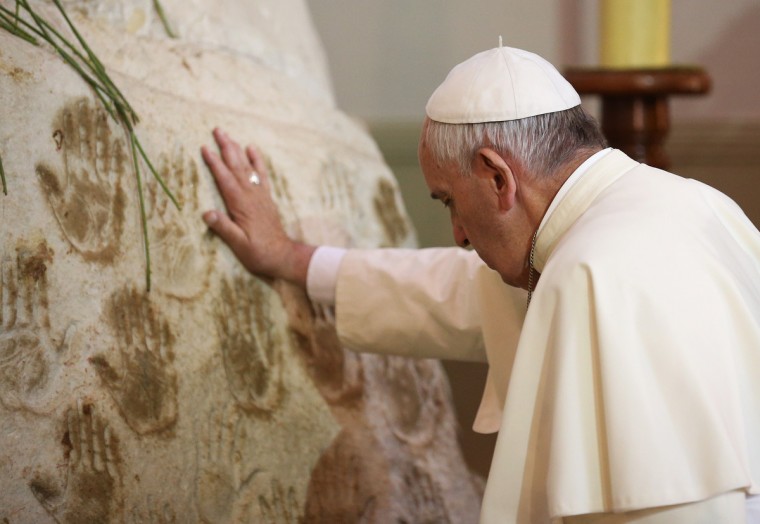 Pope Francis prays in front of a statue of the Virgin Mary at the Marian Shrine of Caacupe, 50 km from Asuncion, before delivering mass before hundreds of thousands of pilgrims, on July 11, 2015. Pope Francis brought his message of equality to Paraguay Friday, on the third and final stop of a South America tour that has burnished his reputation as a powerful voice for the downtrodden. (Alessandro Bianchi/Getty Images) 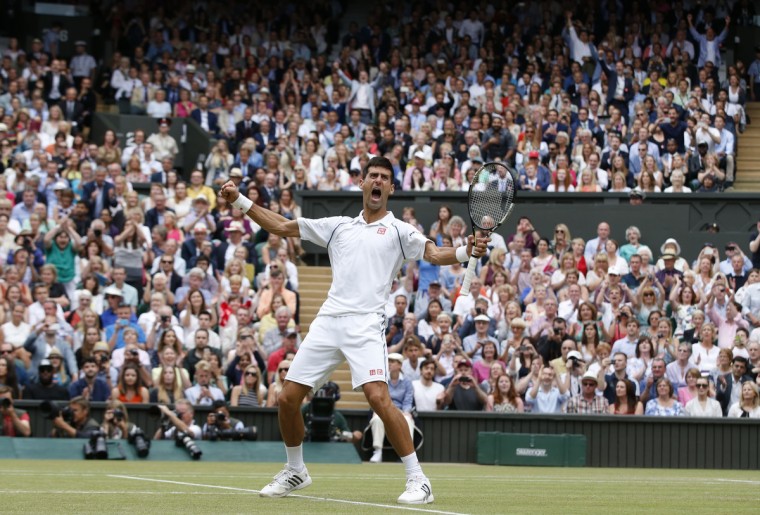 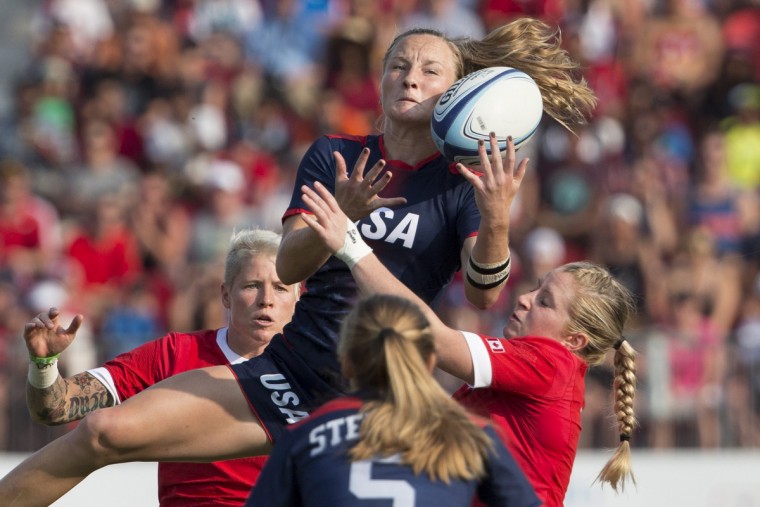 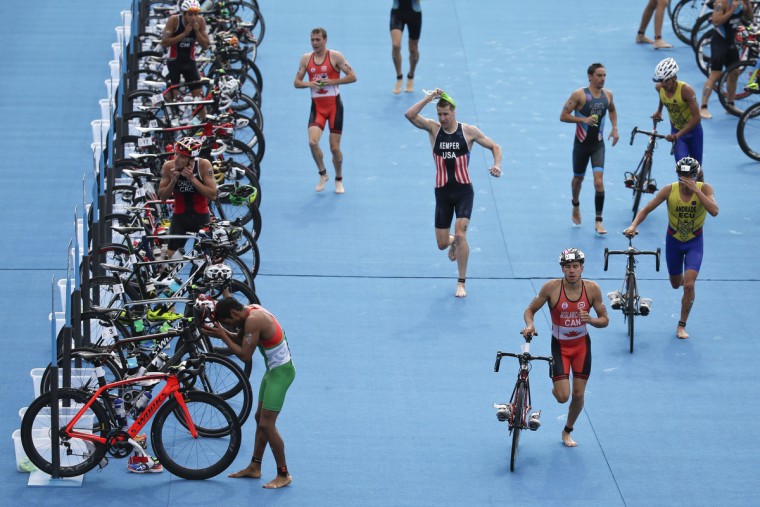 Competitors transition to bikes during the Men’s Triathlon at the Pan Am Games in Toronto, Ontario, Sunday, July 12, 2015. (AP Photo/Felipe Dana) 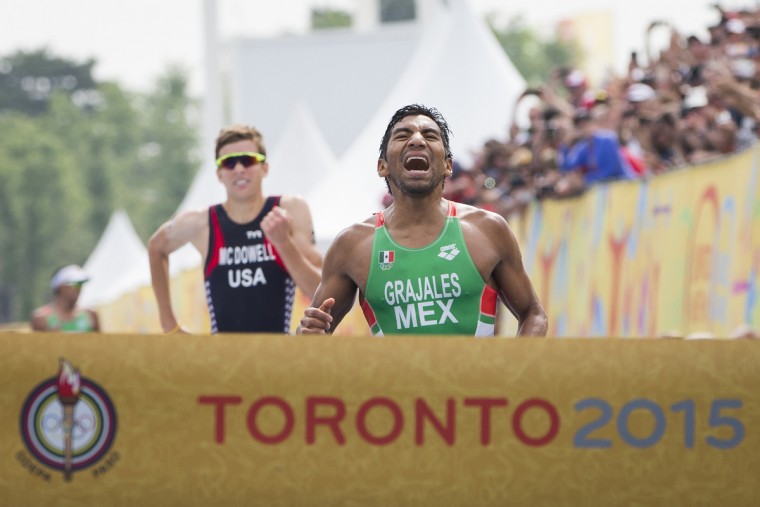 Mexico’s Crisanto Grajales, right, reacts before crossing the finish line to win the gold medal ahead of United States’ Kevin McDowell during the Men’s Triathlon at the Pan Am Games in Toronto, Ontario, Sunday, July 12, 2015. (AP Photo/Felipe Dana) 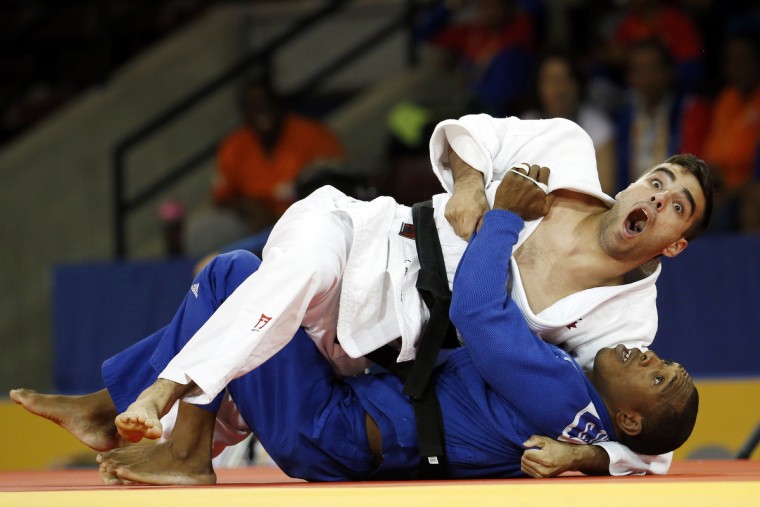 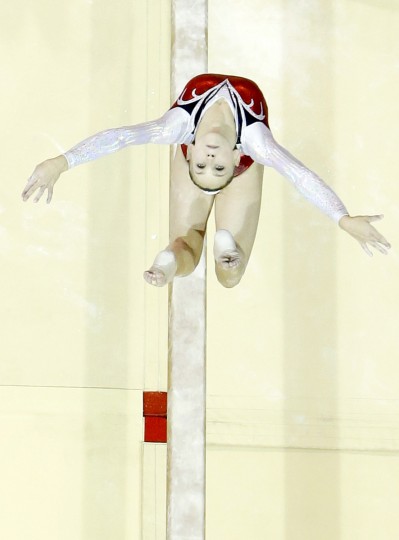 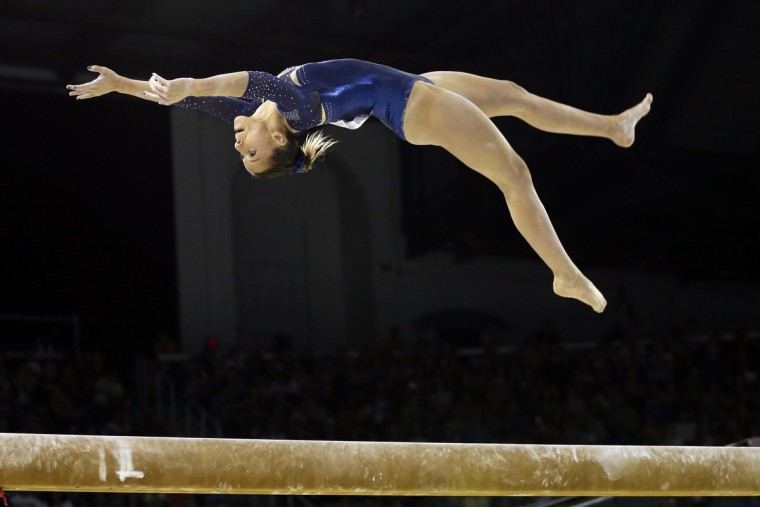 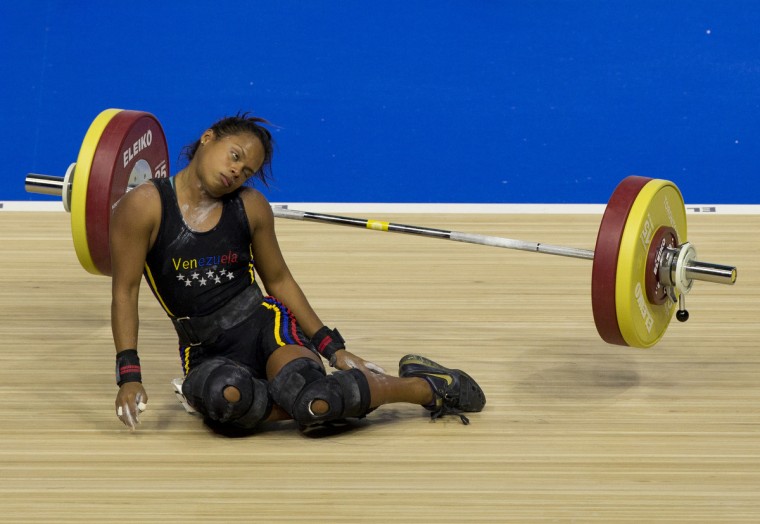 Venezuela’s Genesis Rodriguez Gomez collapses during a lift attempt in the women’s 53kg weightlifting at the Pan Am Games in Oshawa, Ontario, Sunday, July 12, 2015. Rodriguez took silver in the event. (AP Photo/Rebecca Blackwell) 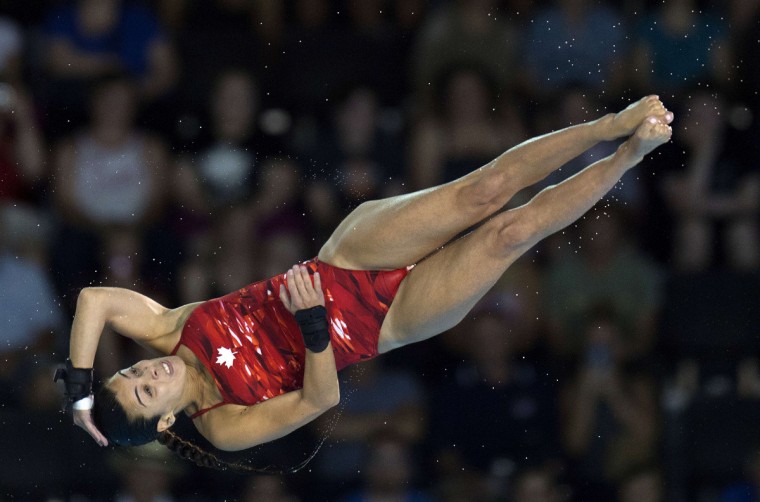 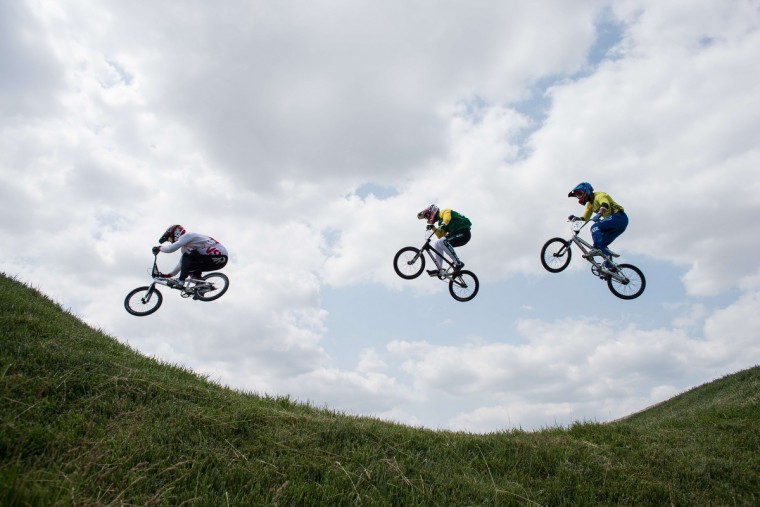 Cyclists clear a jump during the BMX competition at the 2015 Pan American Games in Toronto, Canada, July 11, 2015. (Geoff Robins/Getty Images) 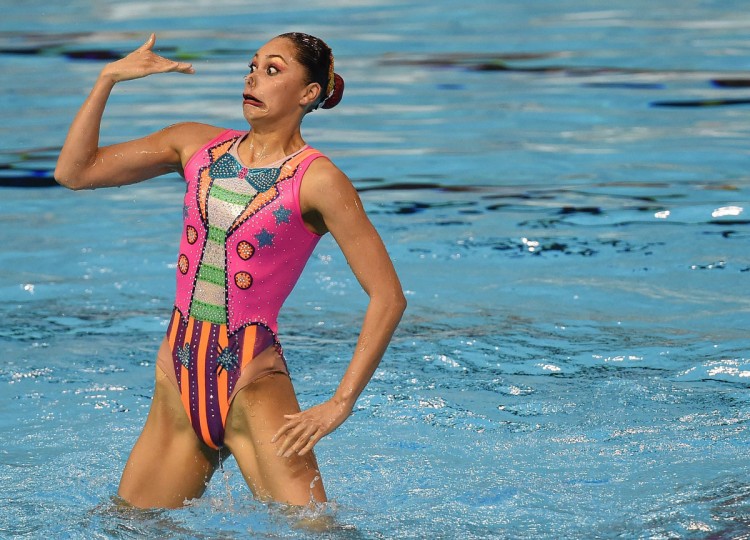 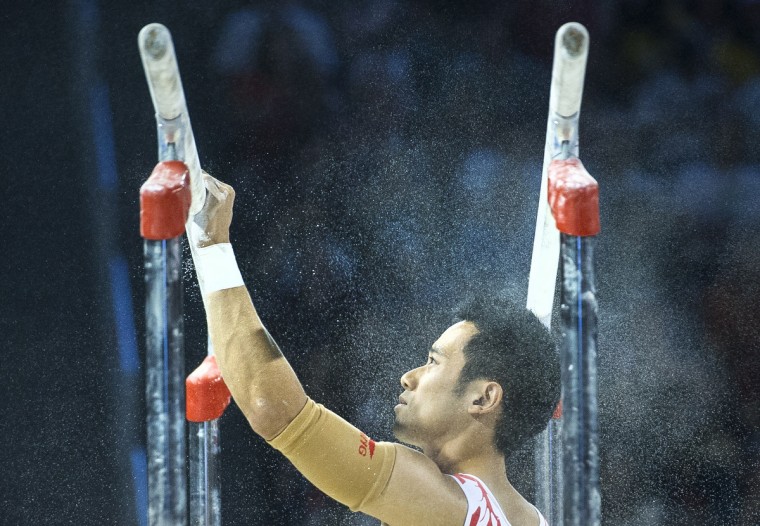 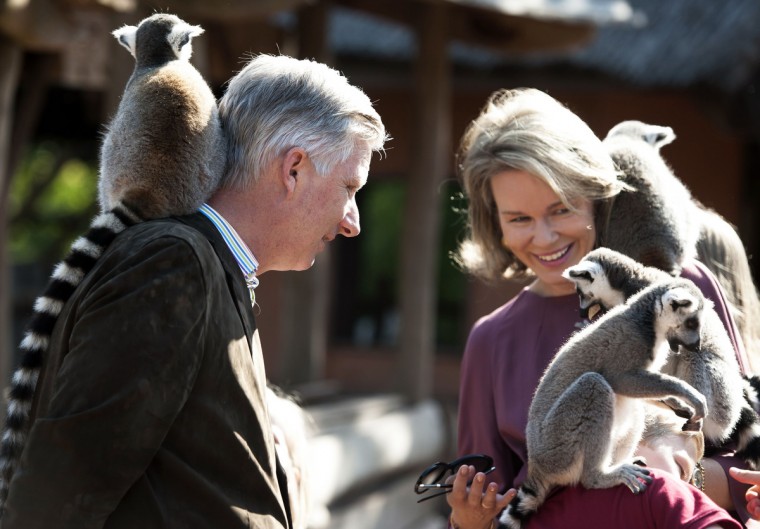 King Philippe of Belgium and Queen Mathilde of Belgium pictured with a lemur during a photoshoot of the Belgian Royal Family’s vacation at animal park Pairi Daiza in Cambron-Casteau, Brugelette, on July 11, 2015. (Michel Gouverneur/Getty Images) 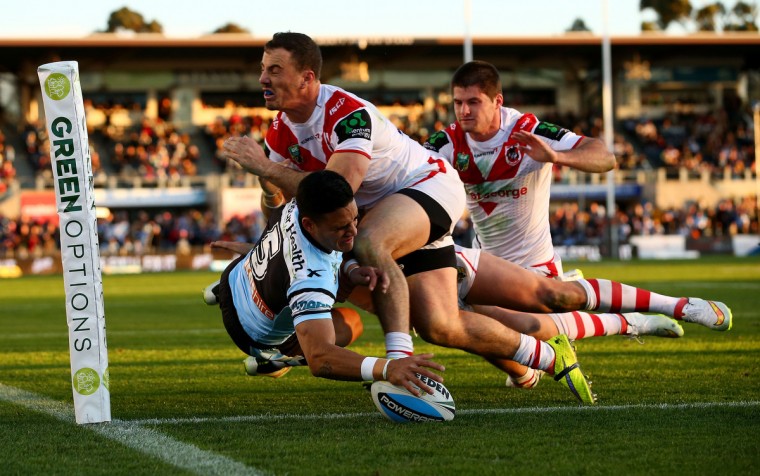 Valentine Holmes of the Sharks scores a try during the round 18 NRL match between the Cronulla Sharks and the St George Illawarra Dragons at Remondis Stadium on July 12, 2015 in Sydney, Australia. (Mark Nolan/Getty Images) 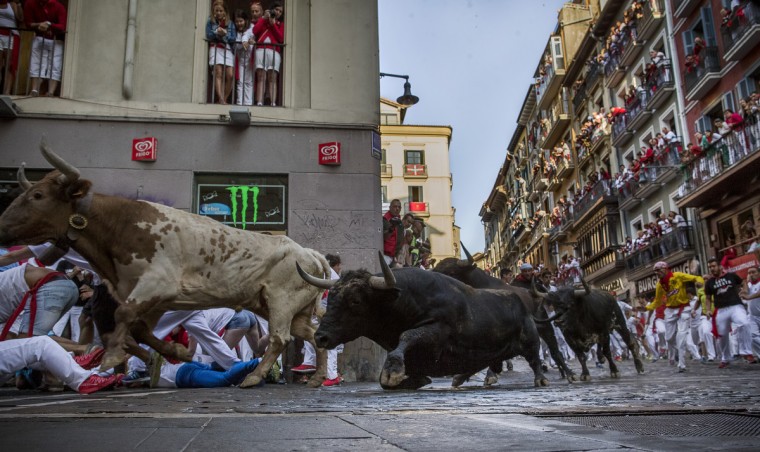 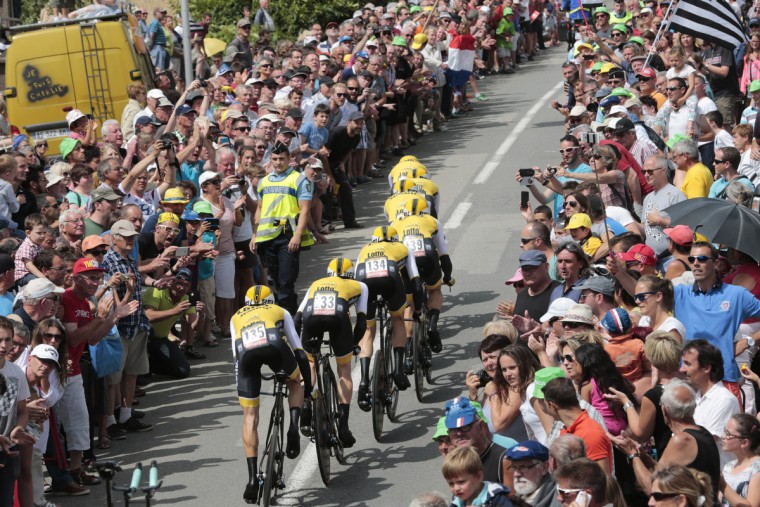 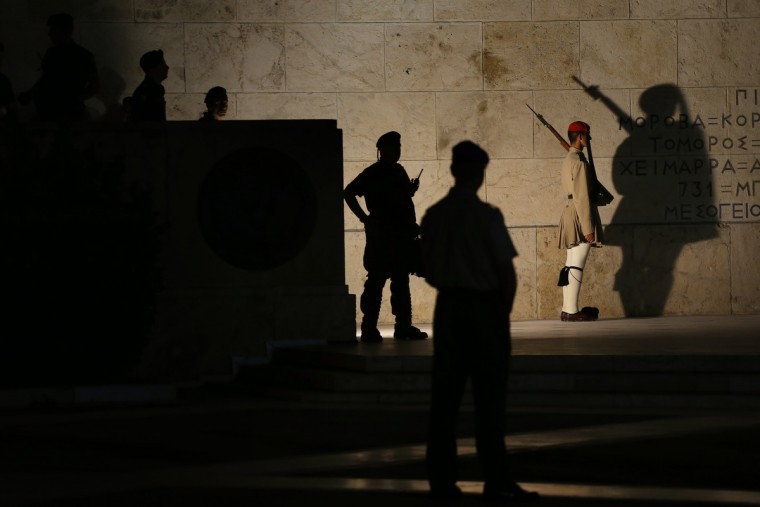 A presidential guard, right, stands guard at the tomb of the unknown soldier as riot police officers guard one of the entrances to the parliament during a demonstration of supporters of the no vote in central Athens, Sunday, July 12, 2015. Greece has another chance Sunday to convince skeptical European creditors that it can be trusted to enact wide-ranging economic reforms which would safeguard its future in the common euro currency. (AP Photo/Emilio Morenatti) 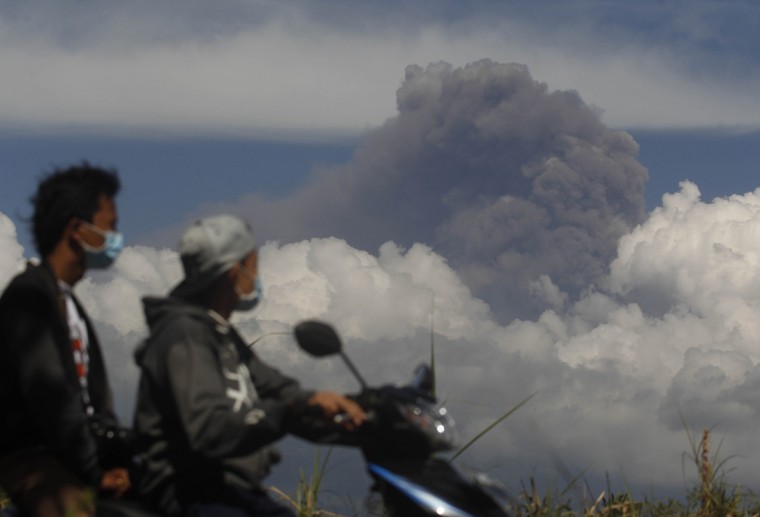