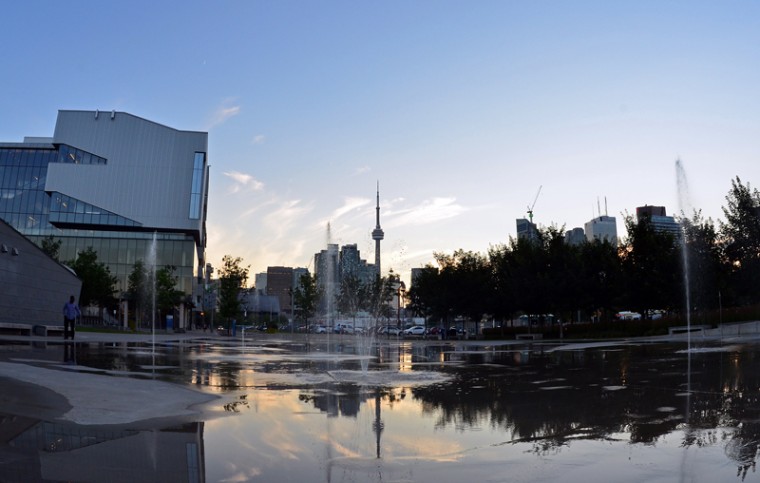 The CN Tower is reflected in water puddles in Toronto, Canada, on Monday during the 2015 Pan American Games. (EVA HAMBACH/AFP/Getty Images) 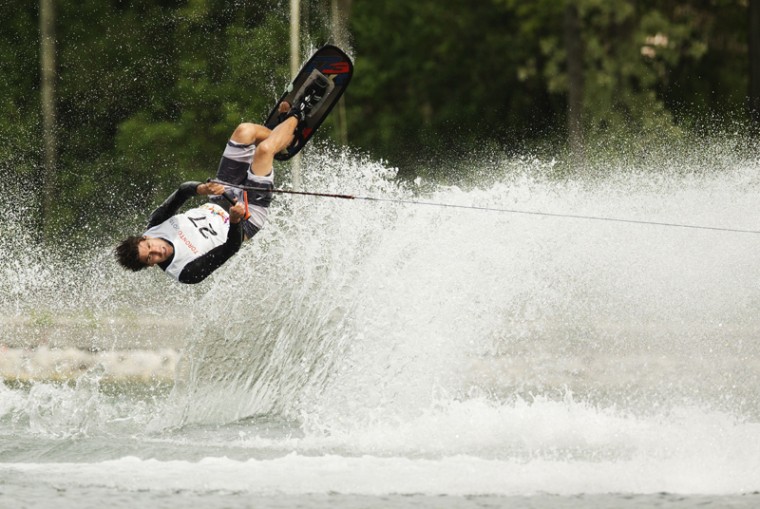 Alvaro Lamadrid of Mexico during the men’s waterski tricks preliminary round at the Pan Am Games in Toronto on Monday. (MARK BLINCHMARK BLINCH/AFP/Getty Images) 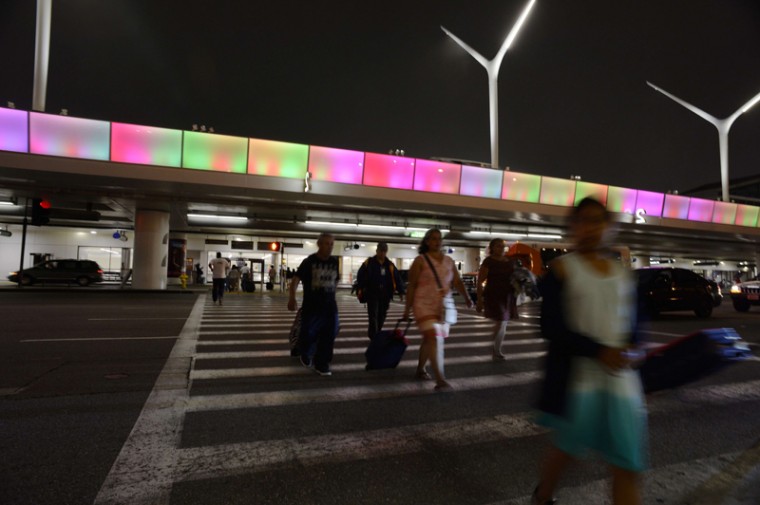 Pedestrians cross the street under a new mile-long programmable lightband is unveiled at Los Angeles International Airport. The polychromatic LED lightband, along with 91 new sculptural light poles, represent completion of Phase II of the airport’s $118 milion facelift, which began last year. The unveiling’s specially created light show was programmed with the colors of the Special Olympics World Summer Games, which open on July 25 in Los Angeles. (ROBYN BECK/AFP/Getty Images) 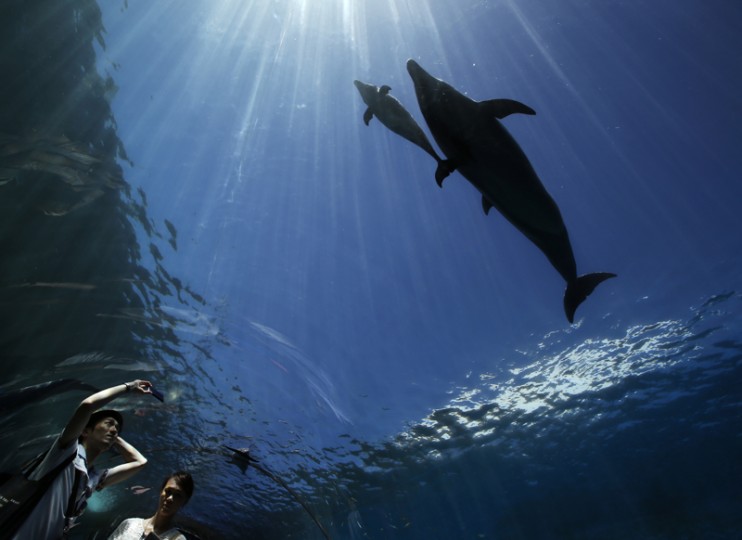 A six-day old baby bottlenose dolphin, along with its mother dolphin, swims over visitors at the Hakkeijima Sea Paradise aquarium-amusement park complex in Yokohama, southwest of Tokyo, on Tuesday. Temperatures in Tokyo’s metropolitan area neared around 96 degrees on Tuesday. (Shuji Kajiyama/AP) 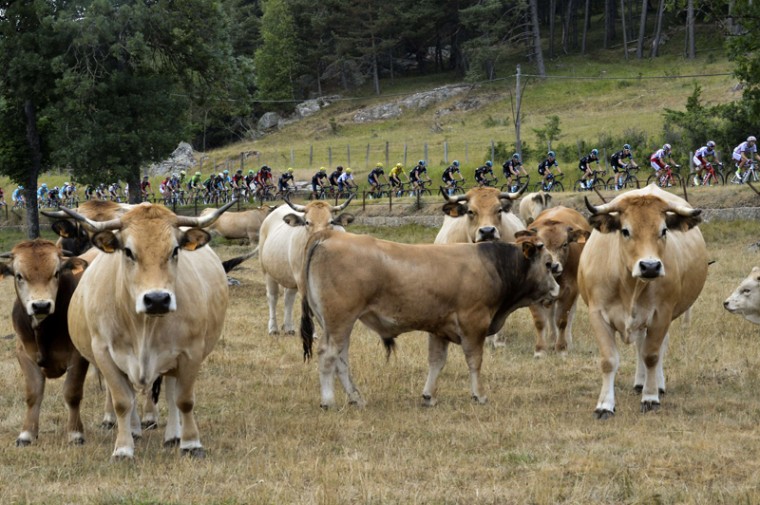 The pack rides past cows during the 15th stage of the 102nd Tour de France cycling race on Sunday, between Mende and Valence, southern France. (JEFF PACHOUD/AFP/Getty Images) 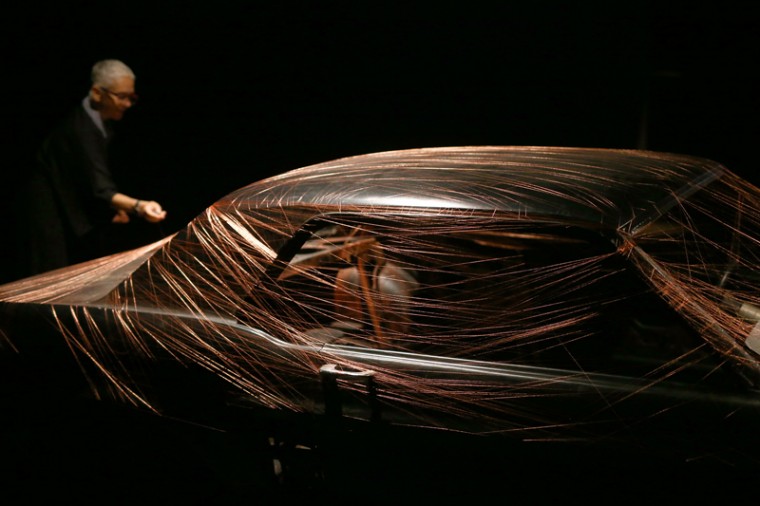 An artists’ assistant wraps a car in cotton thread during a press preview for an exhibition by French-British artist Alice Anderson entitled “Memory Movement Memory Objects” at the Wellcome Collection on Tuesday in London. The exhibition, which is due to run from Wednesday through Oct. 18, showcases work where Anderson has entirely mummified everyday objects in copper thread. (Carl Court/Getty Images) 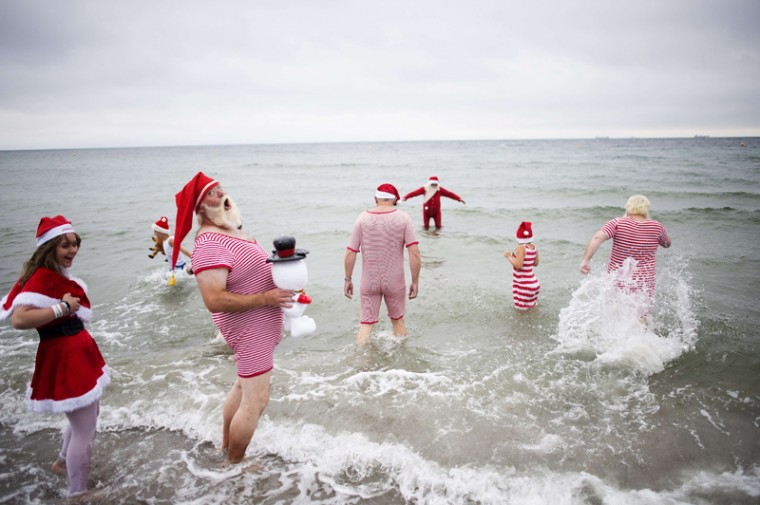 Participants of the 2015 World Congress of Santa Clauses take a bath at Bellevue beach north of Copenhagen, Denmark. on Tuesday. (ERIK REFNER/AFP/Getty Images) 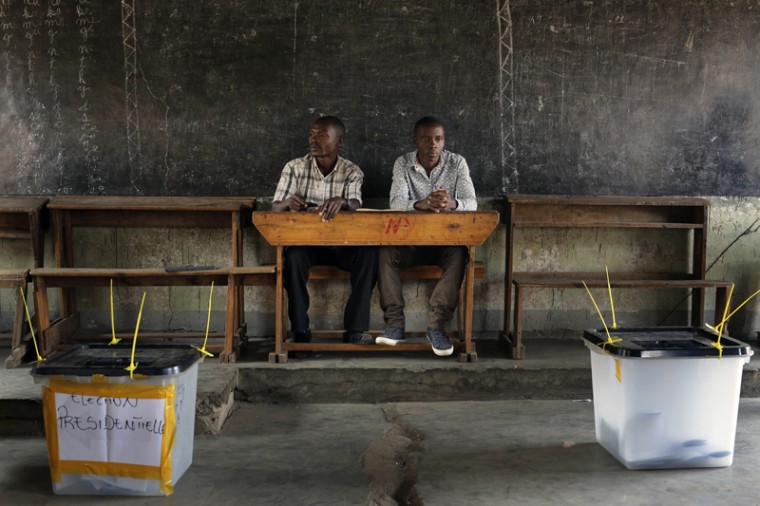 Election observers sit in an empty polling station for the presidential elections in Bujumbura, Burundi, on Tuesday. A low turnout was experienced in several polling stations in the Burundis capital at the start of voting following a night of explosions and gunfire in at least two opposition strongholds that oppose President Pierre Nkurunziza’s candidacy for a third term in office. (Jerome Delay/AP) 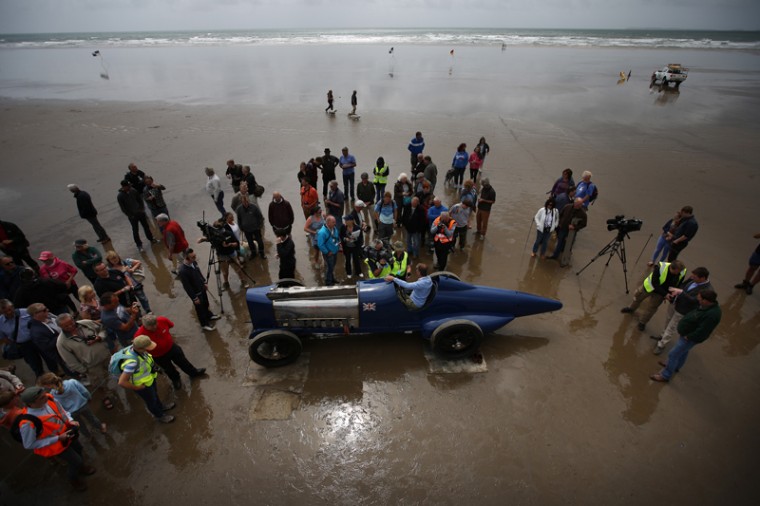 Don Wales sits in the original Sunbeam car as he prepares to recreate his grandfather’s 1925 land speed world record at Pendine Sands on Tuesday in Carmarthen, Wales. Sir Malcolm Campbell drove his 350 hp Sunbeam on July 21, 1925, on the sands at Pendine to reach a new world record of speed of 150.76 miles per hour. The car was bought in 1957 and restored by Lord Montague for his National Motor Museum at Beaulieu in Hampshire. (Peter Macdiarmid/Getty Images) 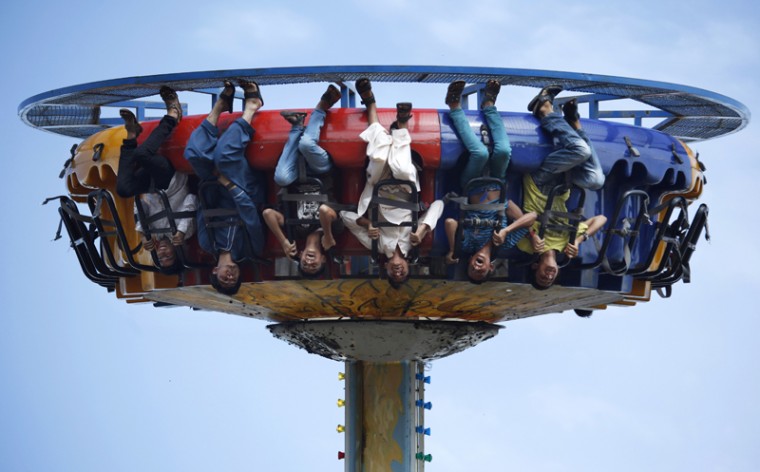 Pakistani youngsters react while taking a ride at a park in Rawalpindi, Pakistan, on Tuesday. (Anjum Naveed/AP) 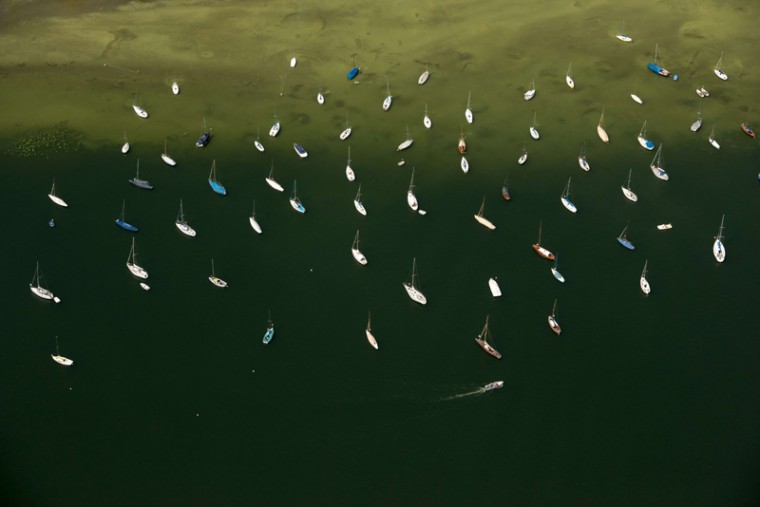 Boats are pictured on Sunday at the Ammer lake, Germany. (PETER KNEFFEL/AFP/Getty Images) 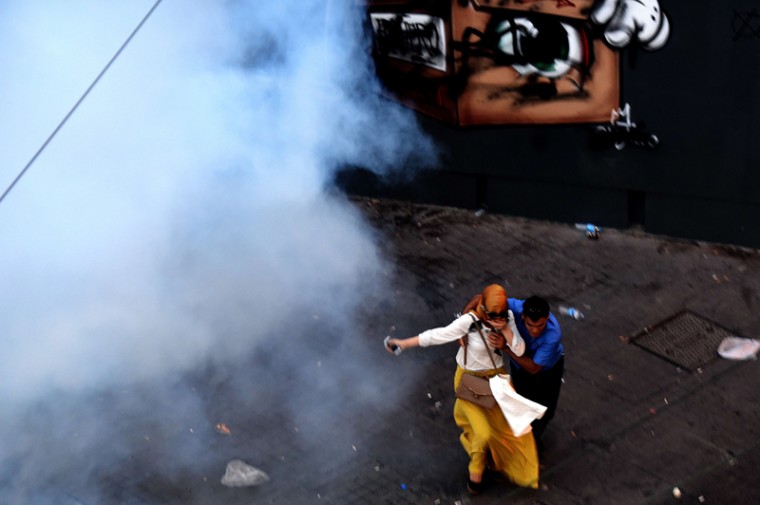 A man and a woman run away from tear gas during a demonstration on Monday in Istanbul following an explosion in Turkey’s southern town of Suruc. A suspected Islamic State suicide bomber killed at least 31 people in an attack on a Turkish cultural center where activists had gathered to prepare for an aid mission in the nearby Syrian town of Kobane. (OZAN KOSE/AFP/Getty Images) 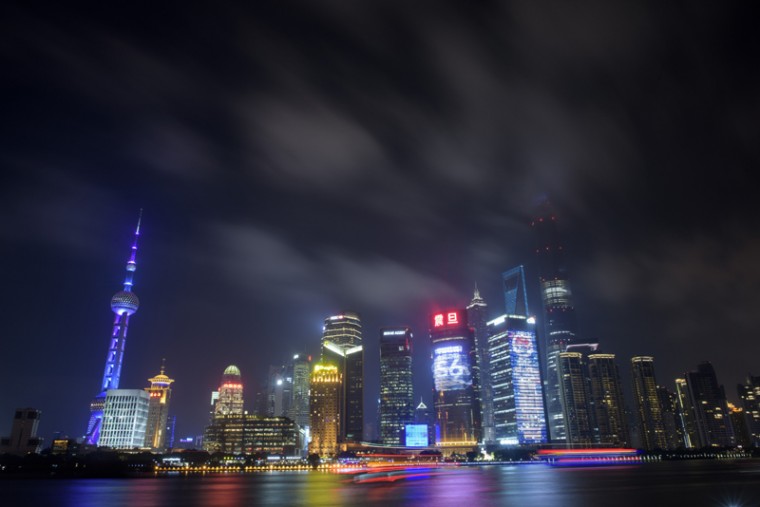 This photo taken on Monday shows clouds above the financial district of Pudong in Shanghai. (JOHANNES EISELE/AFP/Getty Images)