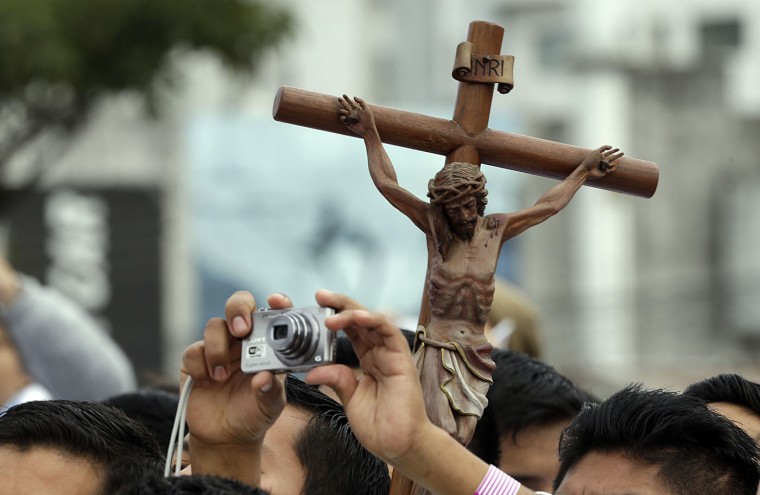 Backdropped by a crucifix, a seminarian reaches up to make a photo as he waits with other seminarians for the arrival of Pope Francis, at Christ the Redeemer square in Santa Cruz, Bolivia, Thursday, July 9, 2015. Hundreds of thousands packed the square and the streets beyond. Overnight, several thousand slept in square to get a spot close to the front. Francis arrived in the Andean nation late Wednesday after three days in Ecuador. (AP Photo/Gregorio Borgia) 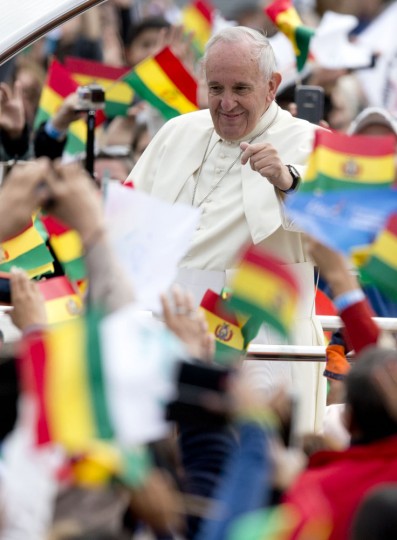 Pope Francis waves from his popemobile as he arrives to celebrate Mass at Christ the Redeemer square in Santa Cruz, Bolivia, Thursday, July 9, 2015. Francis arrived in the Andean nation late Wednesday after three days in Ecuador. (AP Photo/Eduardo Verdugo) 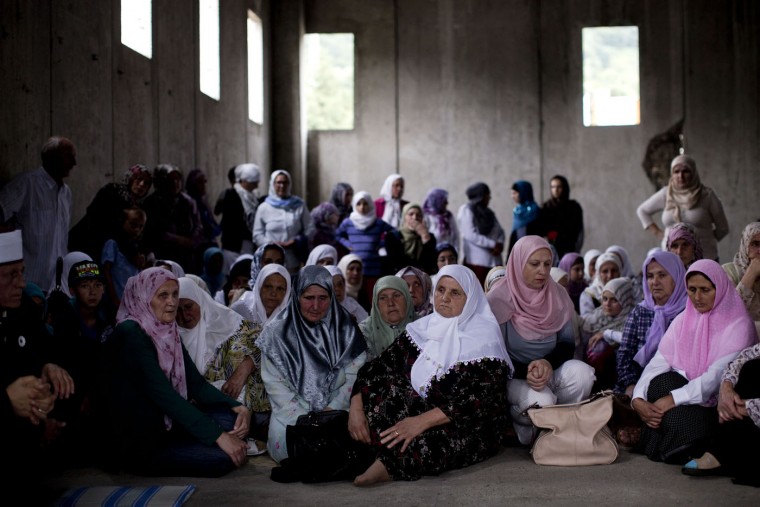 People pause before praying at the Potocari memorial complex, close to Srebrenica, 150 kilometers northeast of Sarajevo, Bosnia and Herzegovina, Thursday, July 9, 2015. The 20th anniversary of the Srebrenica massacre, the worst crime in Europe after the Nazi era, will be marked on Saturday, July 11, 2015. (AP Photo/Marko Drobnjakovic) 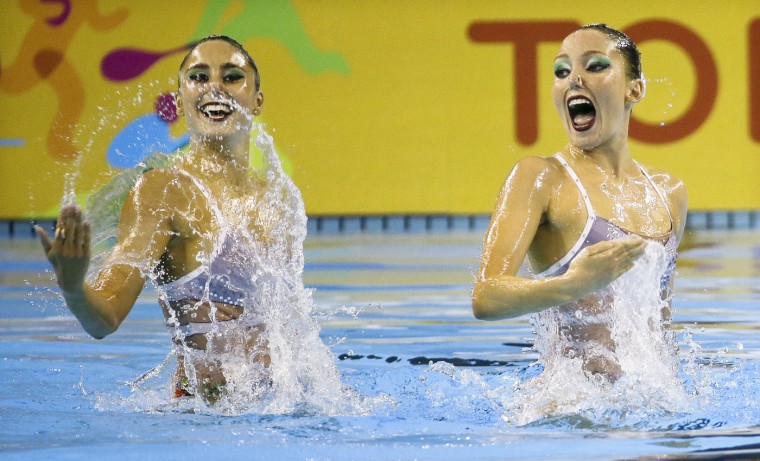 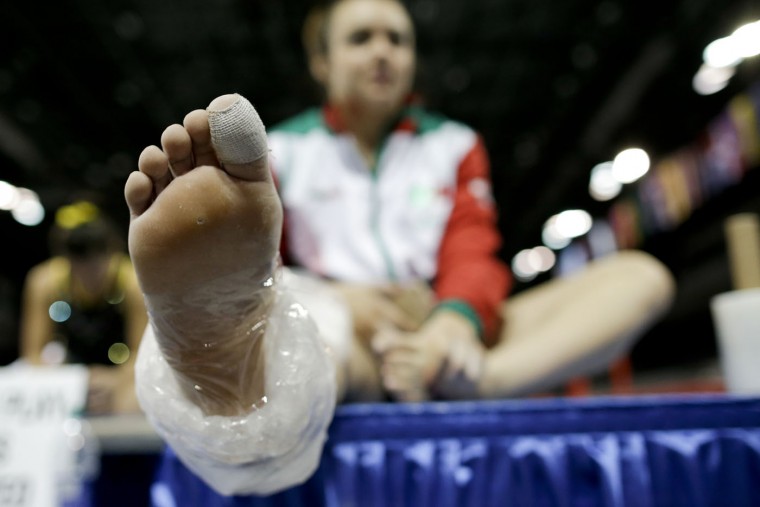 Mexico’s Ana Lago sits with ice around her foot during a training session for the Pan Am Games women’s artistic gymnastics competition in Toronto, Thursday, July 9, 2015. (AP Photo/Gregory Bull) 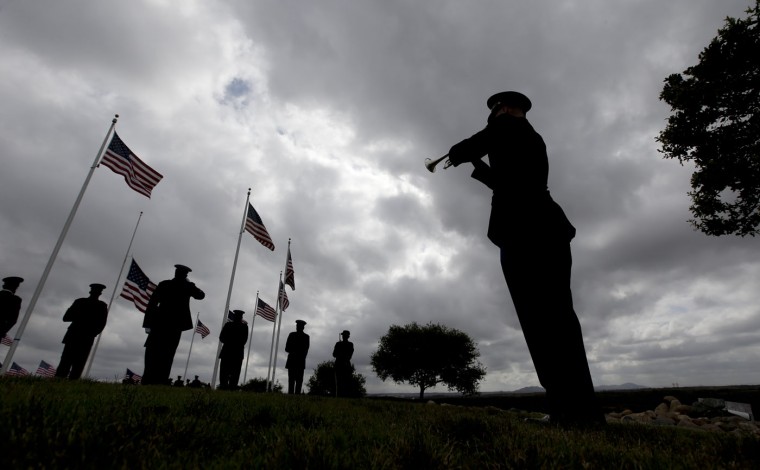 A rifle squad fires a salute at the conclusion of the ceremony as a bugler plays taps for Army Sgt. Charles Schroeter, who was awarded the Congressional Medal of Honor for gallantry in an 1869 battle during the Indian Wars, during a service with full military honors at Miramar National Cemetery, Thursday, July 9, 2015, in San Diego. Schroeters remains were located only recently, when the Congressional Medal of Honor Historical Society traced them to San Diegos Greenwood Memorial Park, where they had rested since 1921. The remains were interred in an unmarked crypt, along with other unclaimed remains. (AP Photo/Chris Carlson) 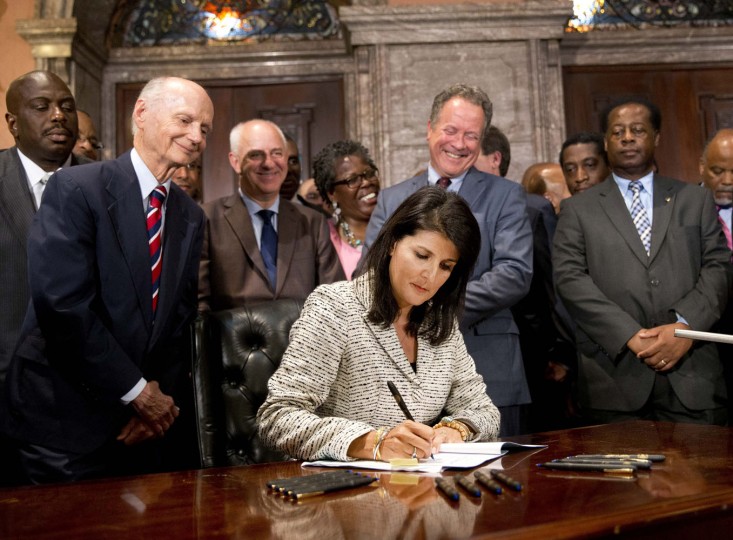 South Carolina Gov. Nikki Haley signs a bill into law as former South Carolina governors and officials look on Thursday, July 9, 2015, at the Statehouse in Columbia, S.C. The law enables the removal of the Confederate flag from the Statehouse grounds more than 50 years after the rebel banner was raised to protest the civil rights movement. (AP Photo/John Bazemore) 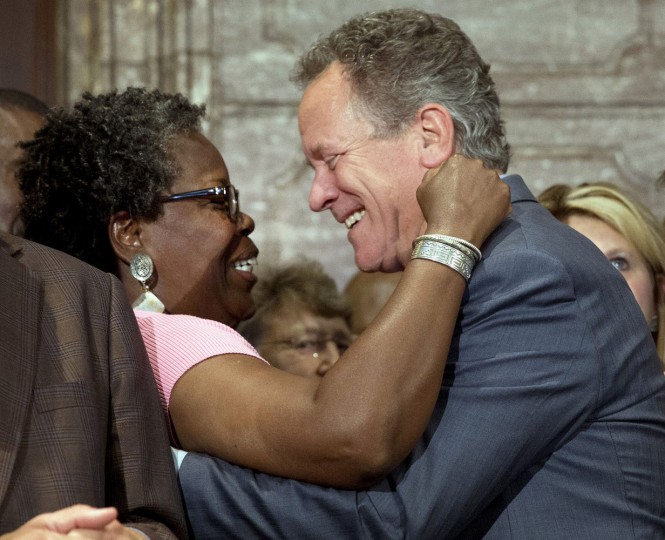 Rep. Gilda Cobb-Hunter, D-Orangeburg, left, reacts with former South Carolina Gov. David Beasley after a ceremony where Gov. Nikki Haley signed a bill into law, Thursday, July 9, 2015, at the Statehouse in Columbia, S.C. The law enables the removal of the Confederate flag from the Statehouse grounds more than 50 years after the rebel banner was raised to protest the civil rights movement. (AP Photo/John Bazemore) 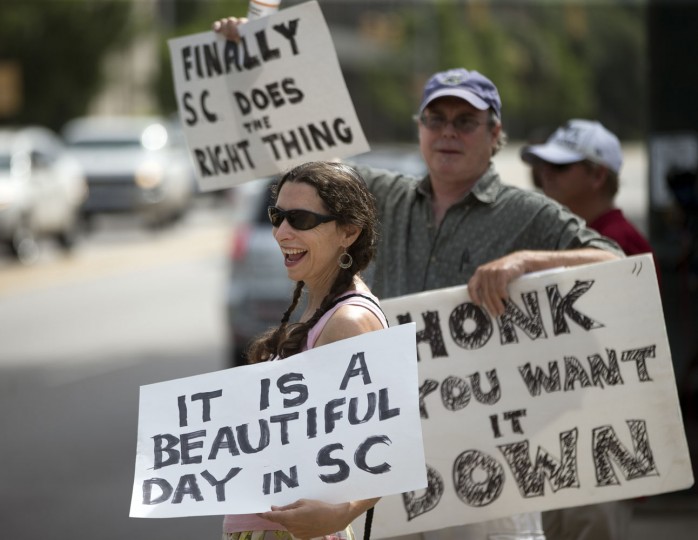 Leslie Minerd, of Columbia, S.C., holds a sign as she celebrates outside the South Carolina Statehouse, Thursday, July 9, 2015, in Columbia, S.C. More than 50 years after South Carolina raised a Confederate flag at its Statehouse to protest the civil rights movement, the rebel banner will be removed Friday in a state where such a reversal seemed unthinkable a month ago. (AP Photo/John Bazemore) 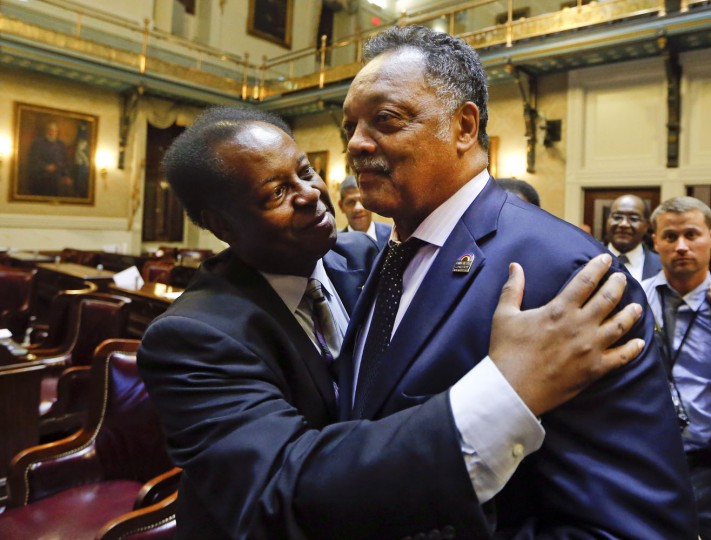 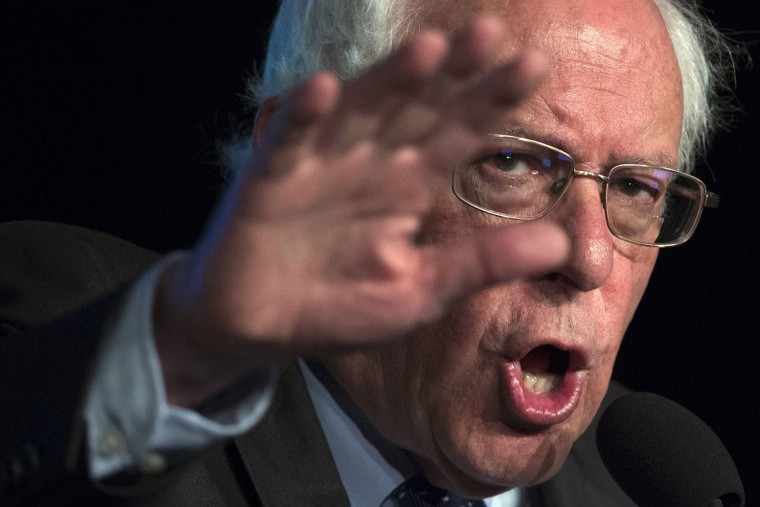 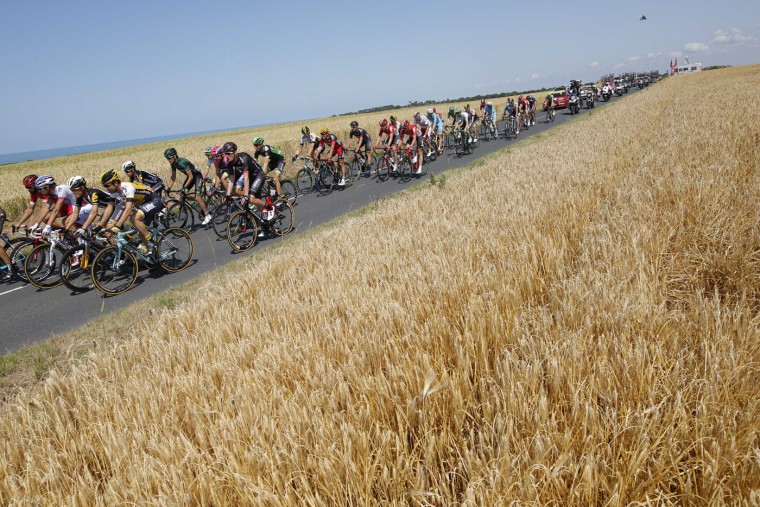 The pack rides along the English Channel on France’s Normandy west coast during the sixth stage of the Tour de France cycling race over 191.5 kilometers (119 miles) with start in Abbeville and finish in Le Havre, France, Thursday, July 9, 2015. (AP Photo/Laurent Cipriani) 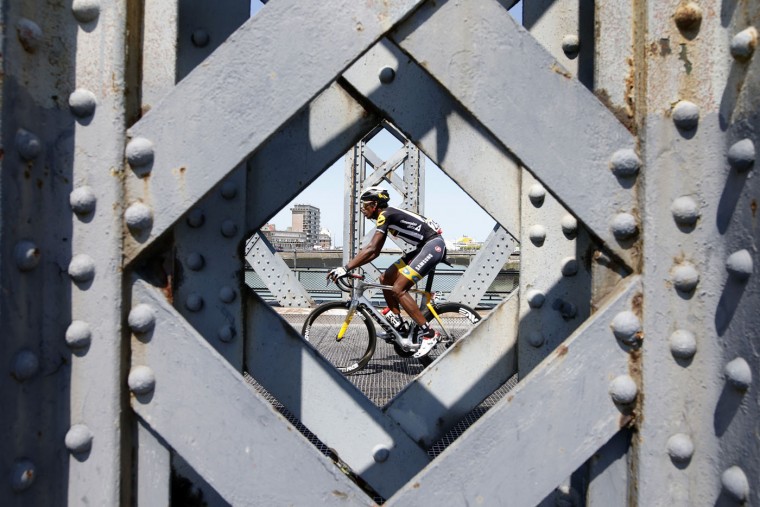 Eritrea’s Daniel Teklehaimanot passes over a bridge as he rides in the breakaway group of three riders in Dieppe during the sixth stage of the Tour de France cycling race over 191.5 kilometers (119 miles) with start in Abbeville and finish in Le Havre, France, Thursday, July 9, 2015. (AP Photo/Laurent Cipriani) 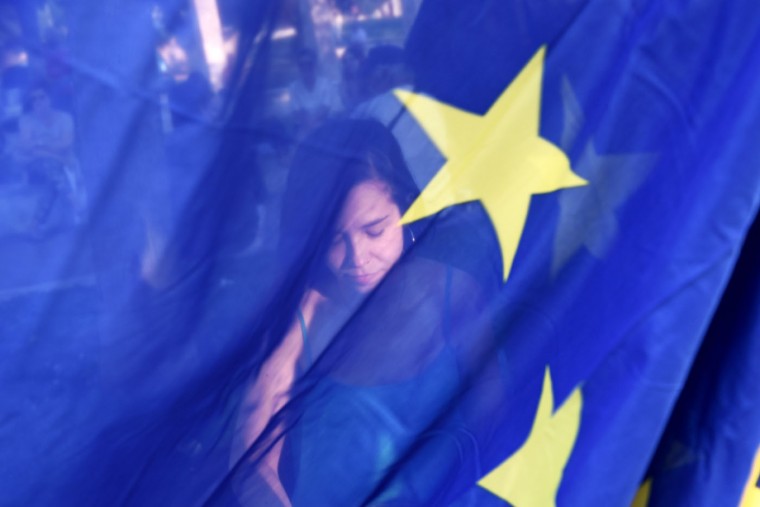 A pro-Euro demonstrator is seen behind a European Union flag during a rally in the northern Greek port city of Thessaloniki, Thursday, July 9, 2015. Hopes that Greece can get a rescue deal that will prevent a catastrophic exit from the euro rose on Thursday, after key creditors said they were open to discussing how to ease the country’s debt load, a long-time sticking point in their talks. (AP Photo/Giannis Papanikos) 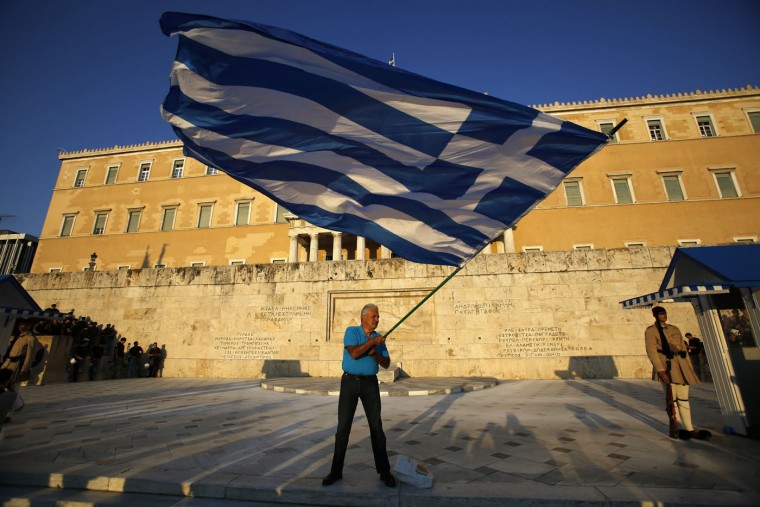 A pro-Euro demonstrator waves a Greek flag in front of the Greek Parliament as riot police, left, block an entrance of a building during a rally at Syntagma square in Athens, Thursday, July 9, 2015. Greece’s government is racing to finalize a plan of reforms for its third bailout, hoping this time the proposal will meet with approval from its European partners and stave off a potentially catastrophic exit from Europe’s joint currency, the euro, within days. (AP Photo/Petros Karadjias) 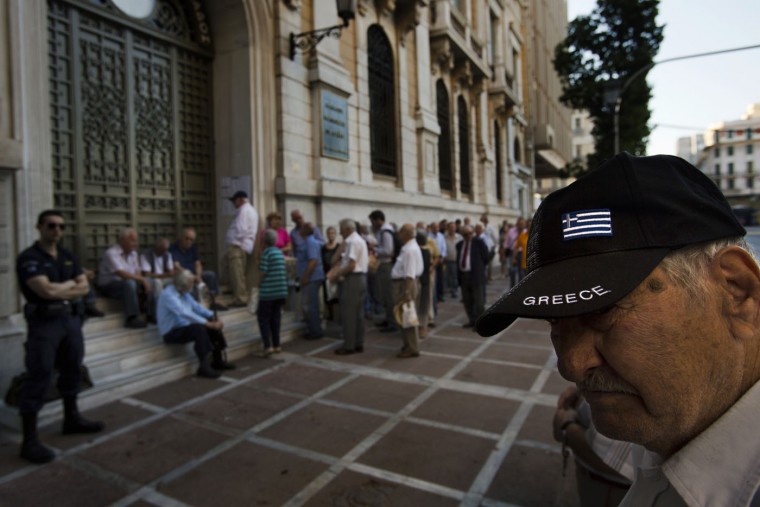 Pensioners wait outside the main gate of the national bank of Greece to withdraw a maximum of 120 euros ($134) in central Athens, Thursday, July 9, 2015. With a deadline just hours away to come up with a detailed economic reform plan, Greece requested a new three-year rescue from its European partners Wednesday as signs grew its economy was sliding toward free-fall without an urgently needed bailout. (AP Photo/Emilio Morenatti) 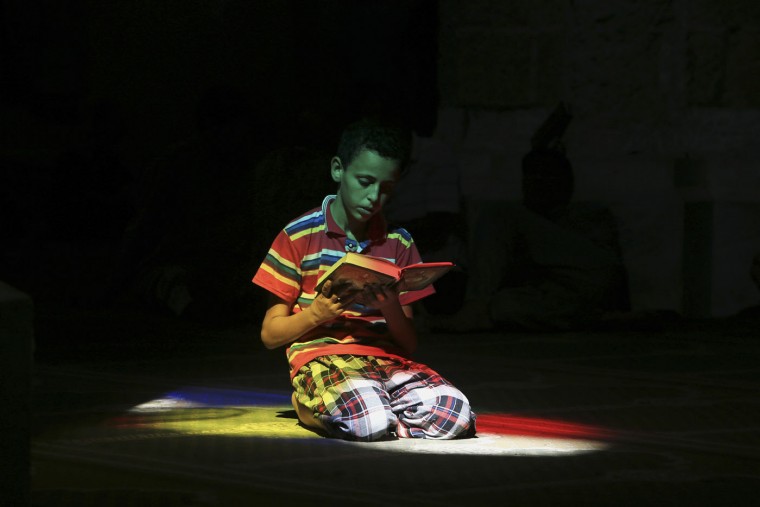 A Palestinian child recites verses from the Quran, Islam’s holy book, as he waits for the noon prayer at a mosque during the holy month of Ramadan in Gaza City in the northern Gaza Strip, Thursday, July 9, 2015. Muslims throughout the world are marking the month of Ramadan, the holiest month in the Islamic calendar during which devotees fast from dawn till dusk. (AP Photo/Adel Hana) 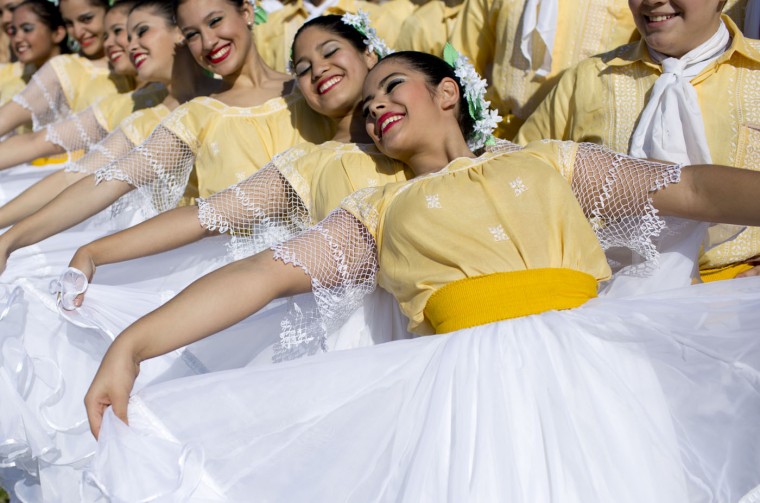 Dancers pose for a picture as they rehearse the performance they’ll do during Pope Francis’ visit to Asuncion, Paraguay, Thursday, July 9, 2015. The pontiff arrives to Paraguay on July 10, the last country he’s visiting during his three-nation South American tour. (AP Photo/Natacha Pisarenko) 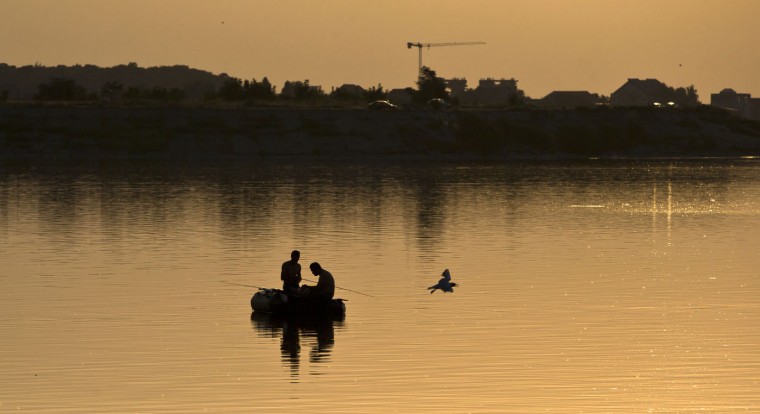 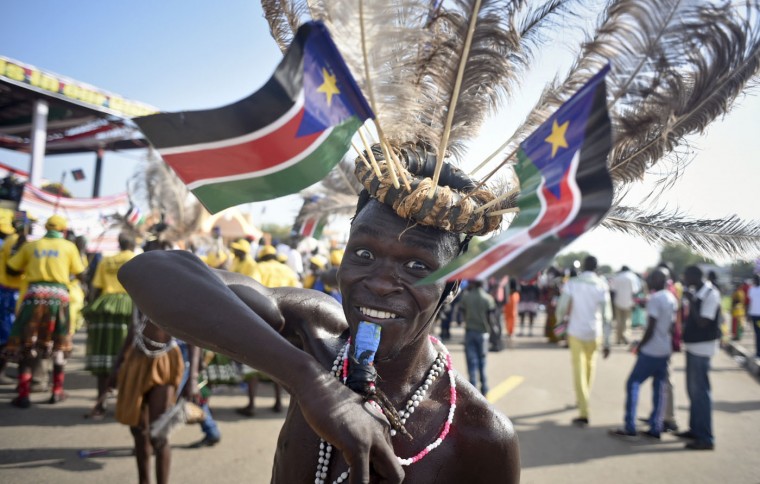 A South Sudanese man wears a headdress of feathers and the national flag, as he attends an independence day ceremony in the capital Juba, South Sudan, Thursday, July 9, 2015. South Sudan marked four years of independence from Sudan on Thursday, but the celebrations were tempered by concerns about ongoing violence and the threat of famine. (AP Photo/Jason Patinkin) 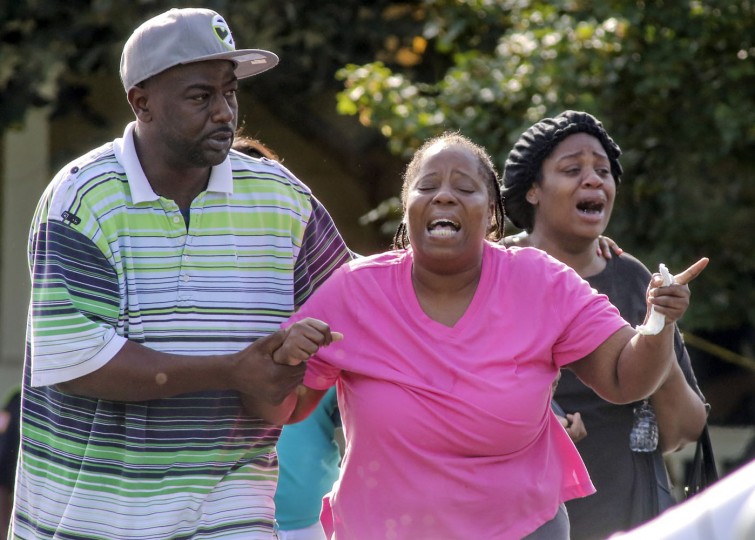 People react near the scene of a shooting, Thursday, July 9, 2015, in the East Lake neighborhood of Atlanta. Police say a 16-year-old girl was shot in the chest and killed in a bedroom of her family’s apartment in The Villages of East Lake. (John Spink/Atlanta Journal-Constitution via AP) 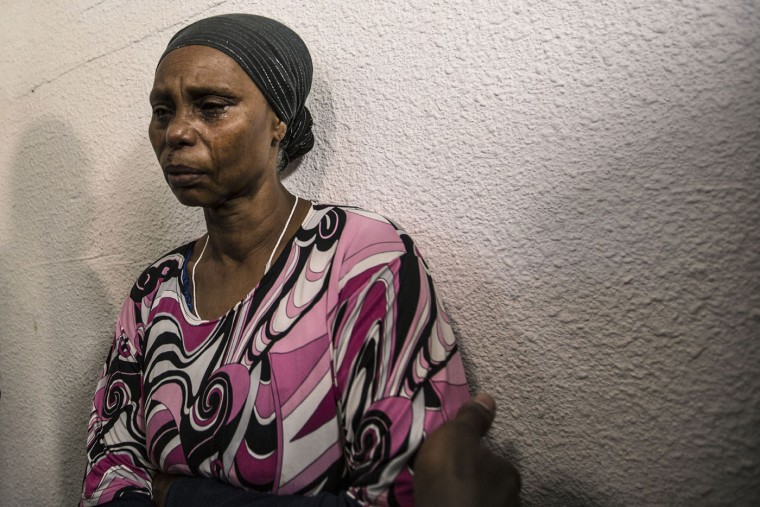 The mother of Ethiopian-Israeli Avraham Mengistu, cries after a family press conference in the costal city of Ashkelon, Israel, Thursday, July 9, 2015. An Israeli security official said Thursday the Hamas militant group has been holding Mengistu in the Gaza Strip for nearly a year. The Israeli defense body responsible for Palestinian civilian affairs, said Mengistu, born in 1986 from the Israeli city of Ashkelon, independently crossed the border fence into the Gaza Strip in September last year, nearly two weeks after the end of the Israel-Gaza war. (AP Photo/Tsafrir Abayov)