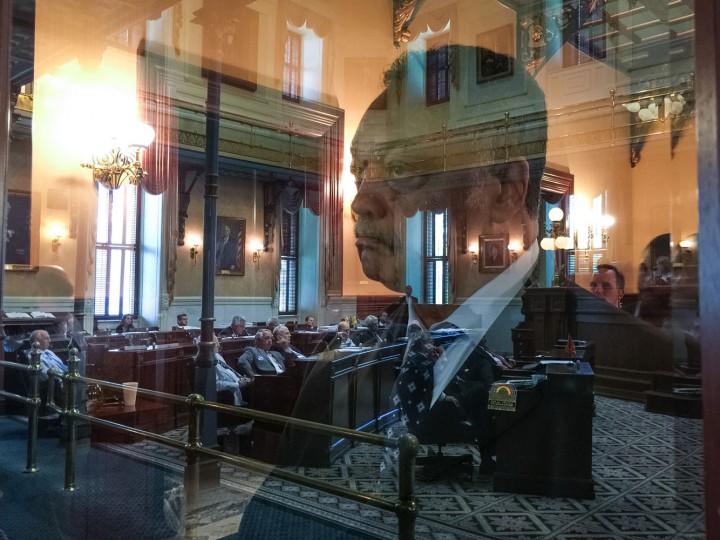 Rev. Jessie Jackson watches the South Carolina senate debating a bill that calls for the removal of the Confederate flag from the State House grounds, Monday, July 6, 2015, in Columbia, S.C. The South Carolina Senate voted Monday to remove the Confederate flag from a pole on the Statehouse grounds, though the proposal still needs approval from the state House and the governor. (Tim Dominick/The State via AP) 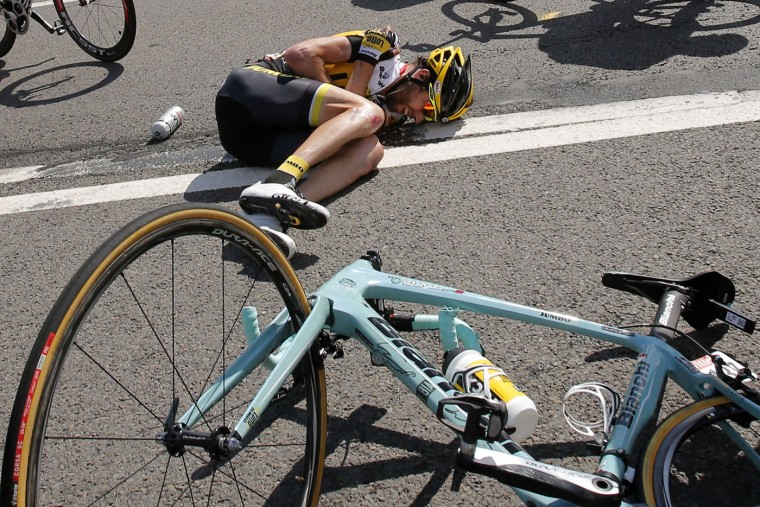 Laurens ten Dam of the Netherlands lies on the road after crashing with several of other riders during the third stage of the Tour de France cycling race over 159.5 kilometers (99.1 miles) with start in Antwerp and finish in Huy, Belgium, Monday, July 6, 2015. (AP Photo/Christophe Ena) 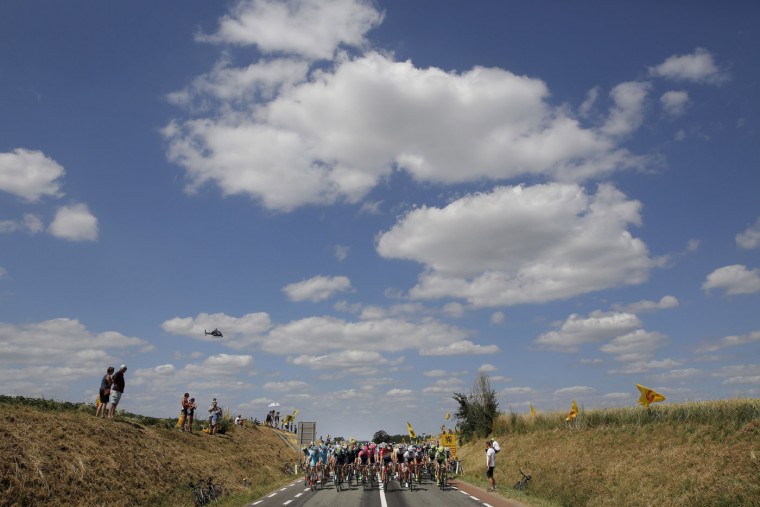 The pack rides during the third stage of the Tour de France cycling race over 159.5 kilometers (99.1 miles) with start in Antwerp and finish in Huy, Belgium, Monday, July 6, 2015. (AP Photo/Laurent Cipriani) 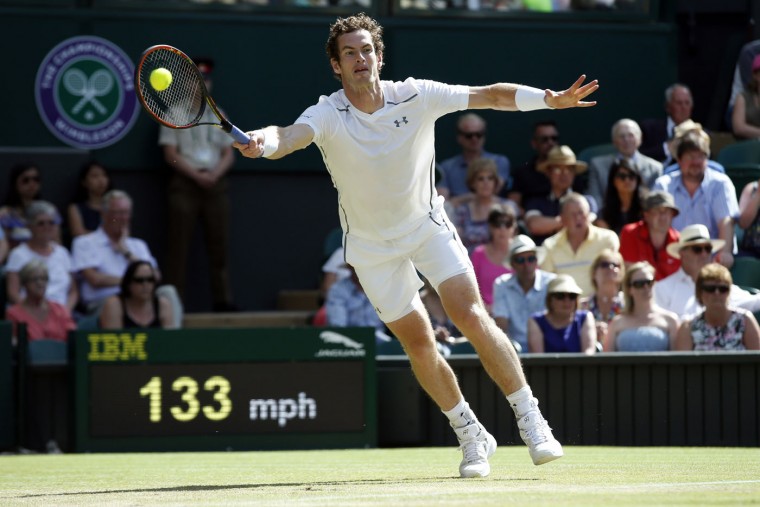 Andy Murray of Britain returns a ball to Ivo Karlovic of Croatia, during their singles match at the All England Lawn Tennis Championships in Wimbledon, London, Monday July 6, 2015. (AP Photo/Alastair Grant) 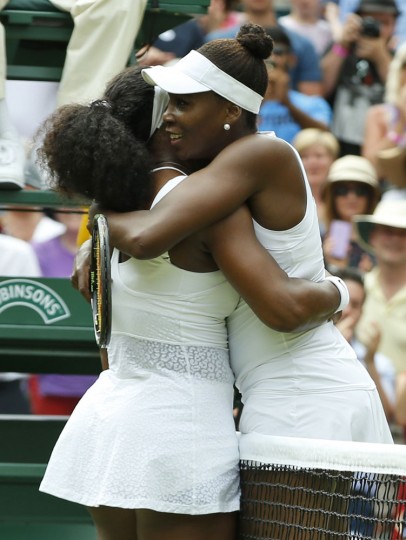 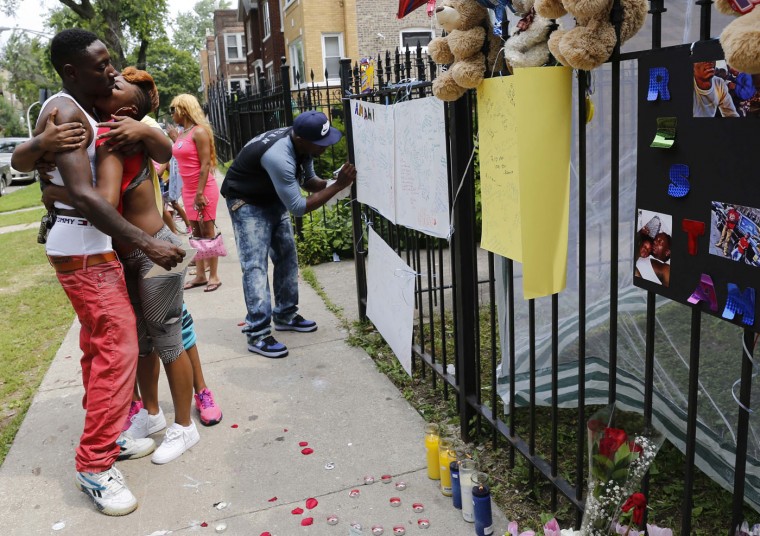 Antonio Brown, left, father of Amari Brown, is embraced by a community member, Monday, July 6, 2015, in Chicago. Authorities say 7-year-old Amari Brown, who was celebrating the Fourth of July with his family, was among three people who were shot and killed overnight during a weekend outbreak of gun-related violence in Chicago. (AP Photo/Christian K. Lee) 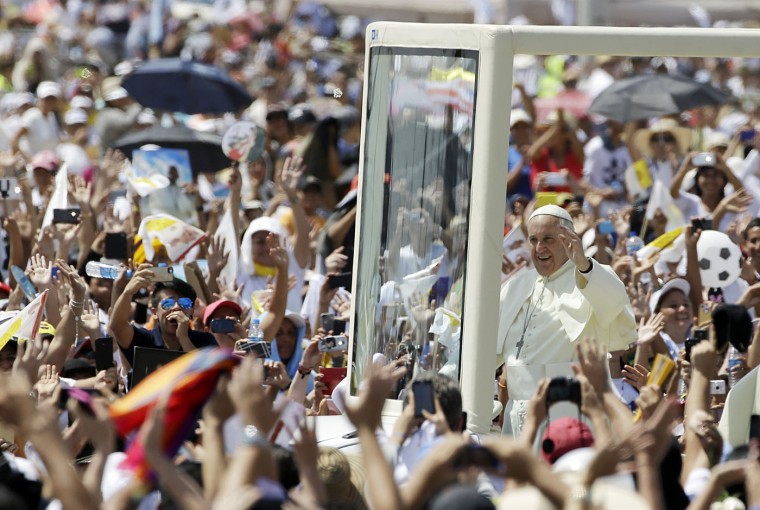 Pope Francis greets the crowd as he makes his way to the main altar in the popemobile to celebrate Mass at Samanes Park in Guayaquil, Ecuador, Monday, July 6, 2015. The Pontiff is visiting Ecuador, Bolivia and Paraguay on the occasion of his Apostolic trip from July 5 to July 12. (AP Photo/Gregorio Borgia) 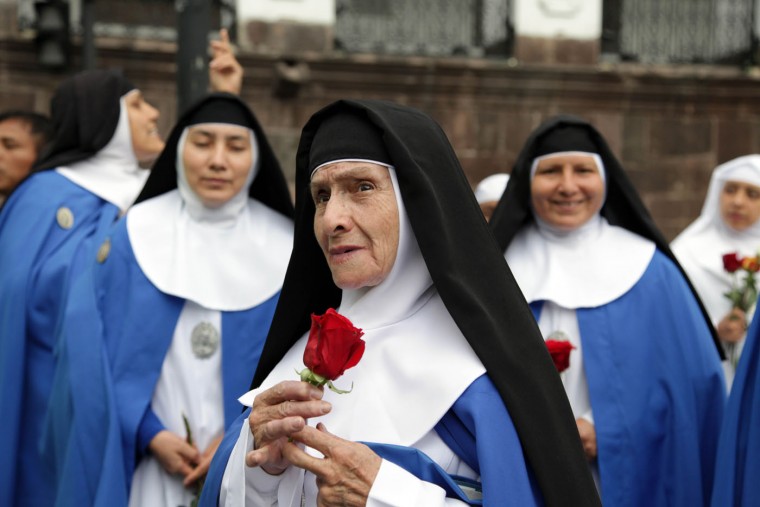 Nuns arrive at Independence square, invited to attend the meeting of Pope Francis and Ecuador’s President Rafael Correa in Quito, Ecuador, Monday, July 6, 2015. After a Mass in the port city of Guayaquil where hundreds of thousands listened to Pope Francis while standing in the hot sun, he will return to the Capital of Quito. Francis is making his first visit as pope to his Spanish-speaking neighborhood. He’ll travel to three South American nations, Ecuador, Bolivia and Paraguay. (AP Photo/Ana Buitron) 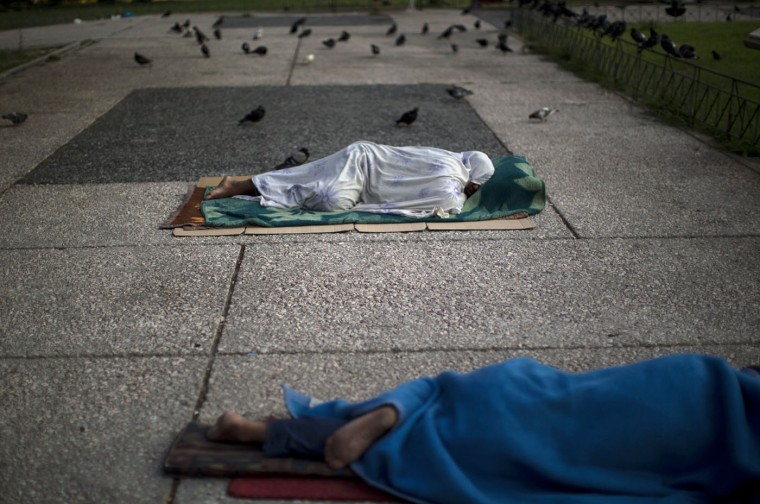 Homeless sleep on the ground in central Athens, Monday, July 6, 2015. Greeces finance minister has resigned following Sundays referendum in which the majority of voters said no to more austerity measures in exchange for another financial bailout. (AP Photo/Emilio Morenatti) 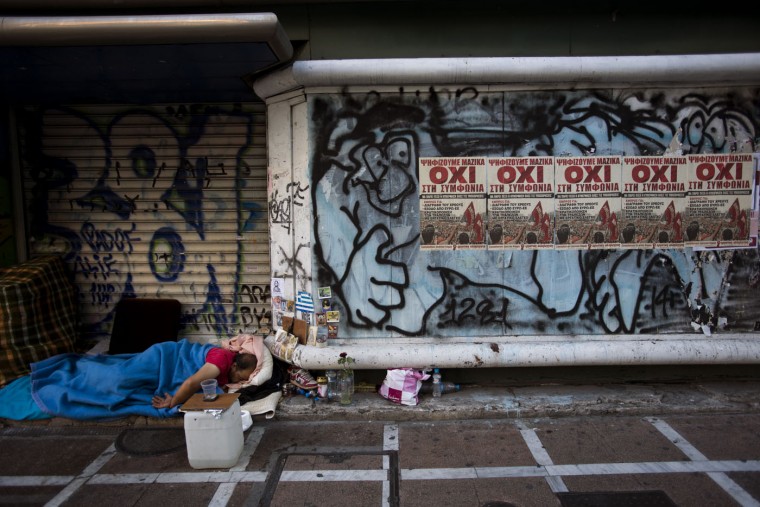 A homeless sleeps at the entrance of a closed store with posters reading ”No” in central Athens, Monday, July 6, 2015. Greeces Finance Minister Yanis Varoufakis has resigned following Sundays referendum in which the majority of voters said no to more austerity measures in exchange for another financial bailout. (AP Photo/Emilio Morenatti) 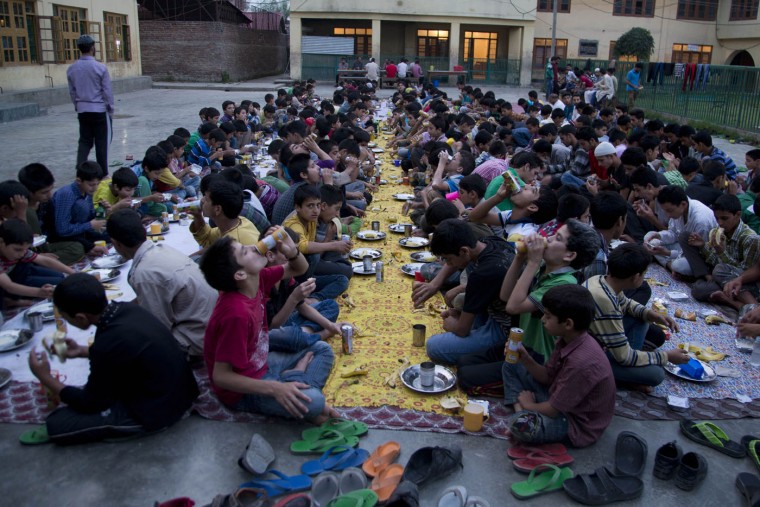 Kashmiri Muslim orphan children break their day long fast, at the Rahat Manzil Orphanage in Srinagar, Indian controlled Kashmir, Monday, July 6, 2015. Muslims across the world are observing the holy fasting month of Ramadan, where they refrain from eating, drinking and smoking from dawn to dusk. (AP Photo/Dar Yasin) 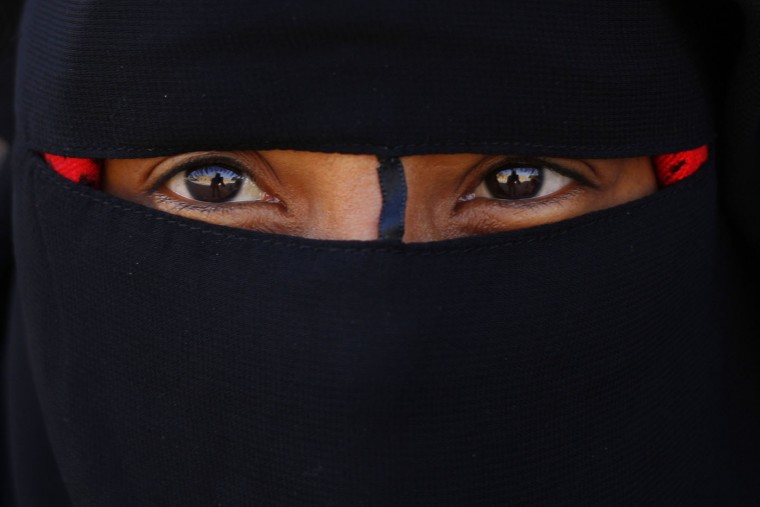 A veiled Egyptian woman poses for a picture as she sits outside her home situated at a cemetery in the so-called City of the Dead, a slum where half a million people live among tombs in Cairo, Egypt, Monday, July 6, 2015. (AP Photo/Hassan Ammar) 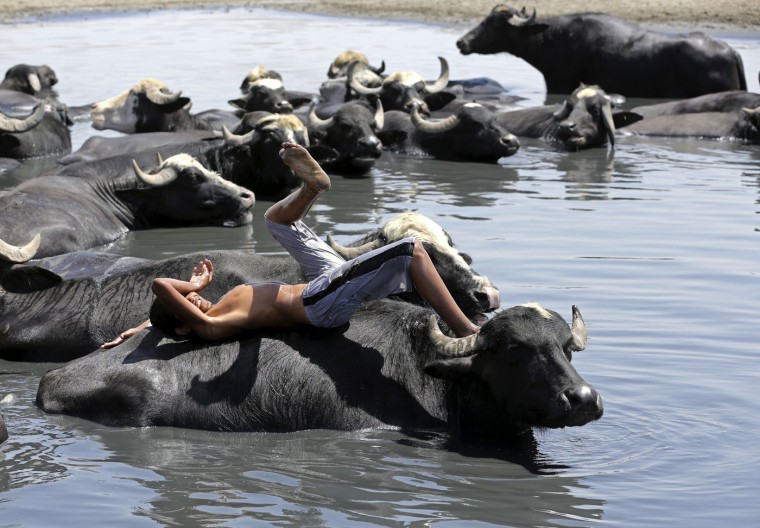 A child rests on the back of a water buffalo in the Diyala River in Baghdad, Iraq, Monday, July 6, 2015. The animals are bathed daily to help keep them free of diseases and to protect them from the heat. (AP Photo/Hadi Mizban) 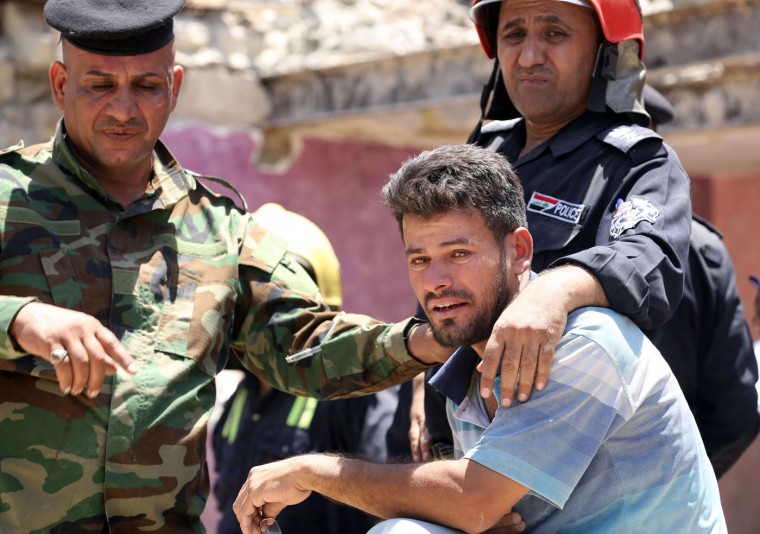 An Iraqi man grieves after losing several members of his family after a bombing in the eastern neighborhood of New Baghdad. Iraq, Monday, July 6, 2015. At least a dozen civilians were killed on Monday when a Russian-made fighter jet accidentally dropped a bomb over a Baghdad neighborhood, officials said. (AP Photo/Hadi Mizban) 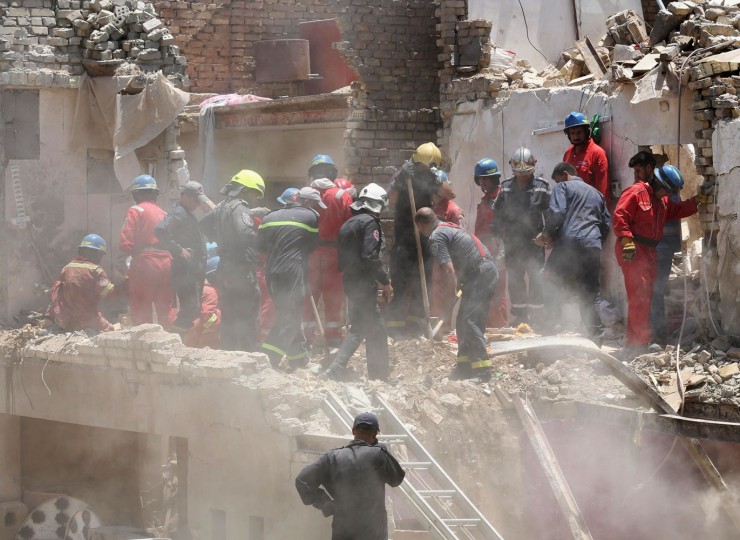 Iraqi security forces search for survivors after a bombing in the eastern neighborhood of New Baghdad. Iraq, Monday, July 6, 2015. At least a dozen civilians were killed on Monday when a Russian-made fighter jet accidentally dropped a bomb over a Baghdad neighborhood, officials said. (AP Photo/ Hadi Mizban) 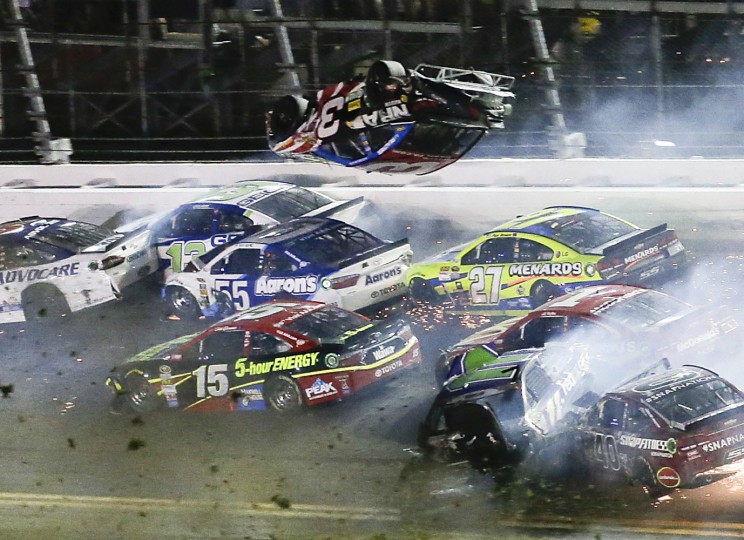 Austin Dillon (3) goes airborne and hits the catch fence as he was involved in a multi-car crash on the final lap of the NASCAR Sprint Cup series auto race at Daytona International Speedway, Monday, July 6, 2015, in Daytona Beach, Fla. (AP Photo/Terry Renna) 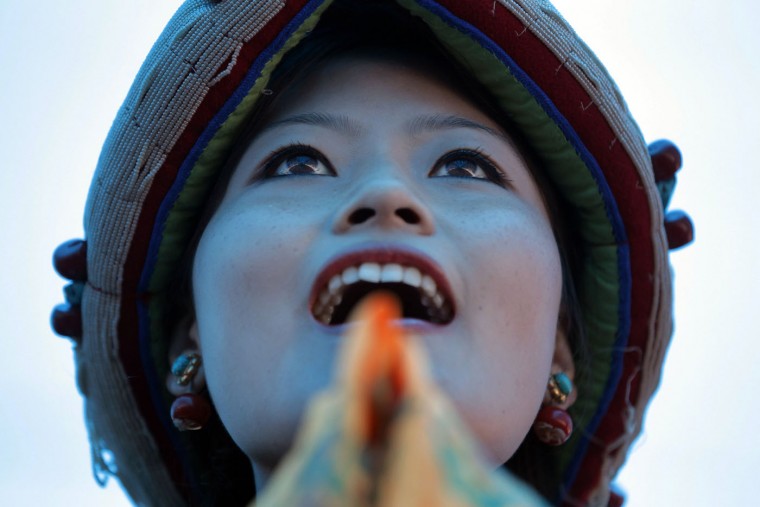 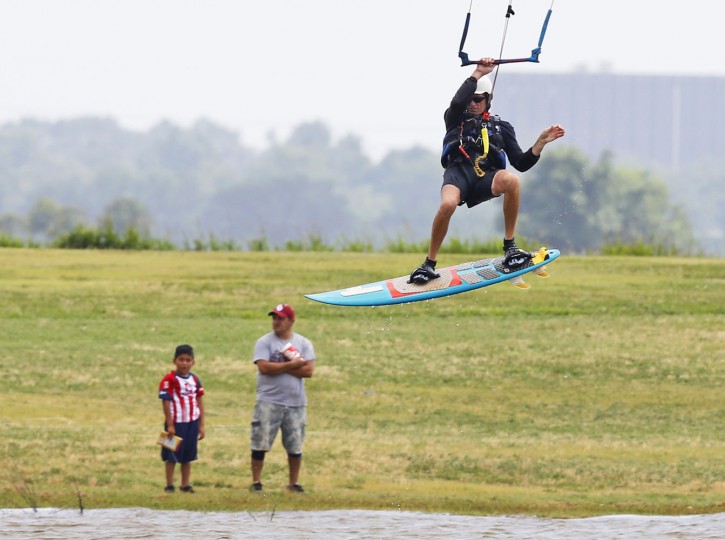 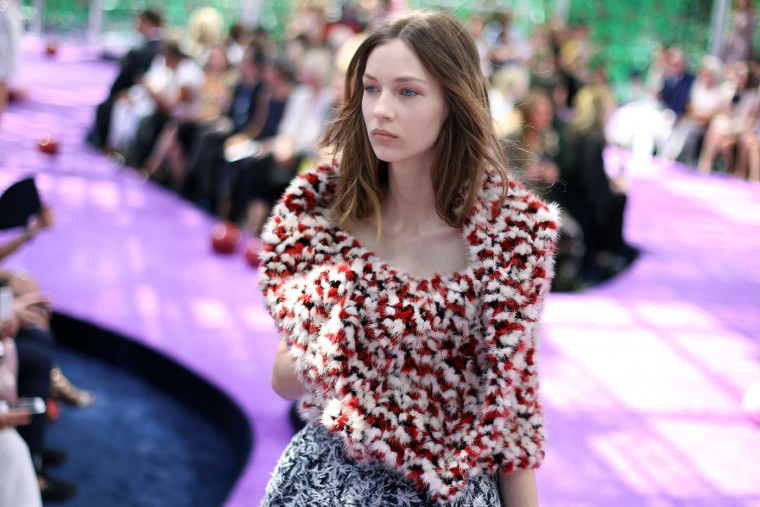 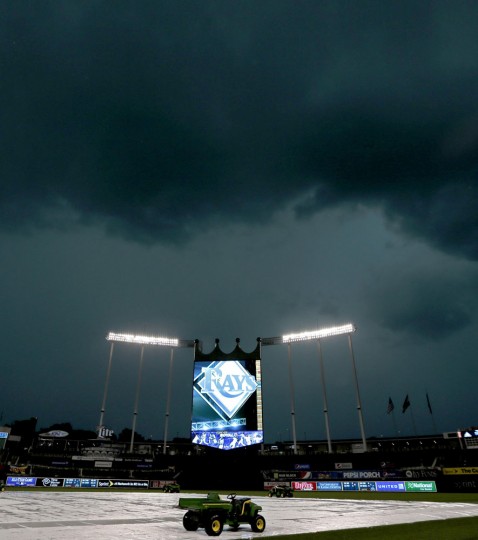 Dark clouds hang over Kauffman Stadium as as severe thunderstorm passes though before a baseball game between the Kansas City Royals and the Tampa Bay Rays Monday, July 6, 2015, in Kansas City, Mo. The game was postponed and will be replayed Tuesday as the first game of a doubleheader. (AP Photo/Charlie Riedel) 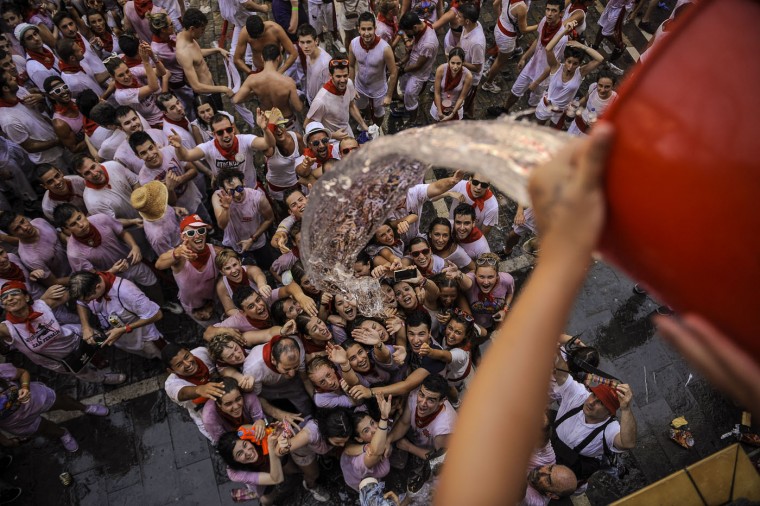 Revelers cool off with water thrown from a balcony during the launch of the ‘Chupinazo’ rocket, to celebrate the official opening of the 2015 San Fermin Fiestas, in Pamplona, northern Spain, Monday, July 6, 2015. Revelers from around the world kick off the festival with a messy party in the Pamplona town square, one day before the first of eight days of the running of the bulls glorified by Ernest Hemingway’s 1926 novel “The Sun Also Rises.” (AP Photo/Alvaro Barrientos) 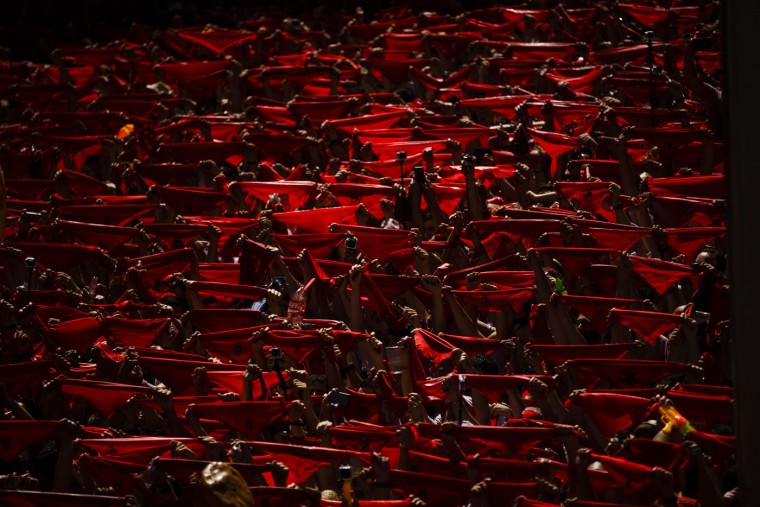 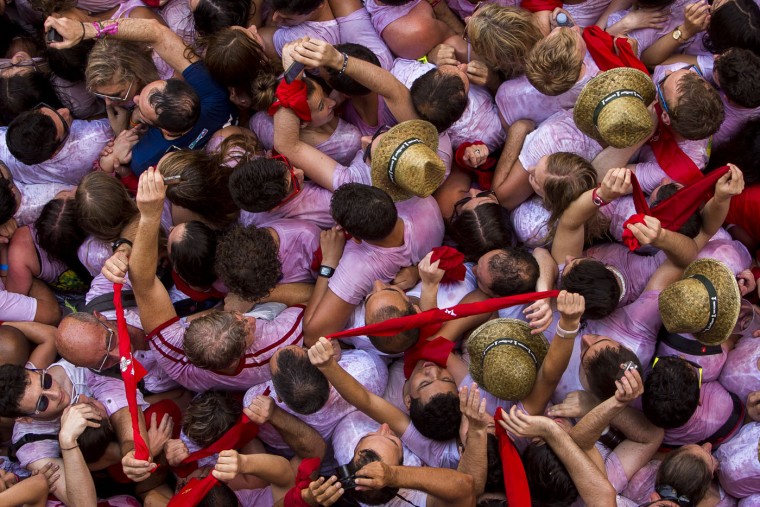