10th anniversary of the London 7/7 bombings 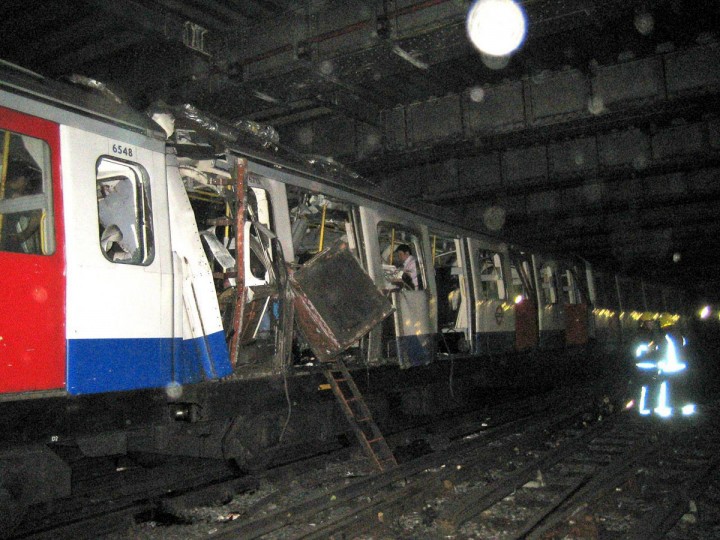 A damaged train in the London subway, between Liverpool Street and Aldgate subway stations, Thursday, July 7, 2005. Four explosions tore through the London subway and demolished a double-decker bus during the morning rush hour in London. (KRT PHOTOGRAPH BY MIKE PARTRIDGE/EXPRESS SYNDICATION) 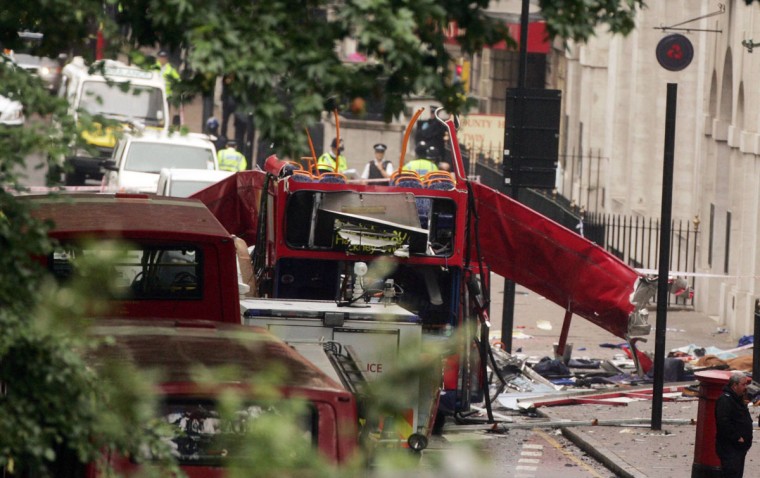 A double-decker bus is torn open from an explosion at Tavistock Place in London, one of several explosions that tore through the London subway during the morning rush hour, Thursday, July 7, 2005 in London, England. (KRT PHOTOGRAPH BY HUMPHREY NEMAR/EXPRESS SYNDICATION) 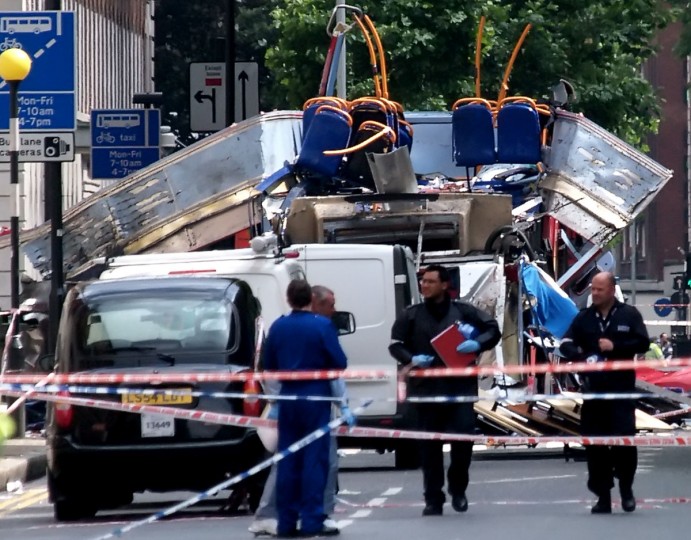 British police forensic experts walk away from the wreckage of a double-decker London bus which was ripped apart by an explosion in Russell Square in central London, Thursday July 7, 2005. (AP PHOTO/Max Nash) 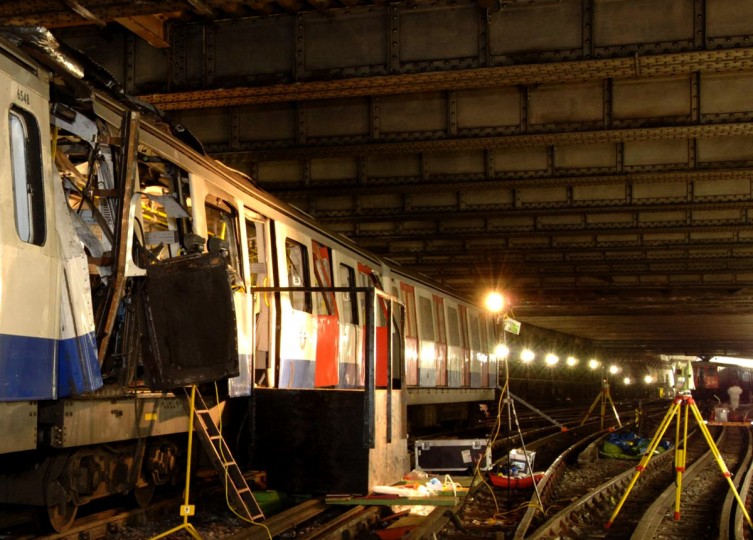 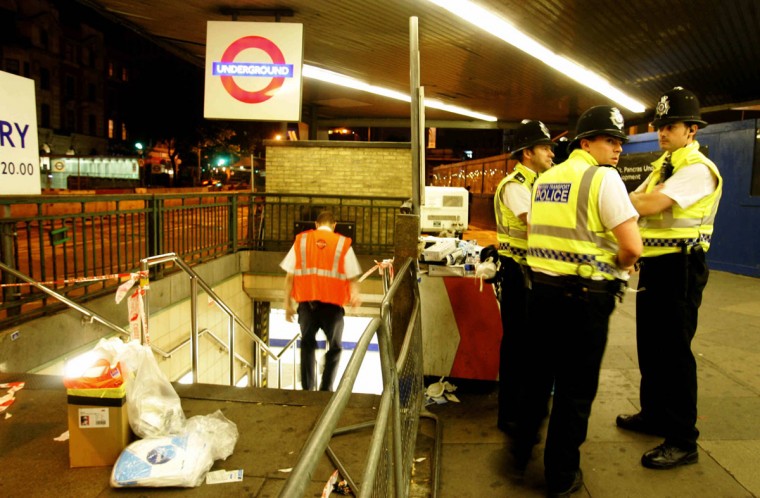 British police guard the entrance of Kings Cross station, where a bomb went off inside the station’s tube network on July 7, 2005. (CARL DE SOUZA/AFP/Getty Images)

Police block access to a double-deck bus that was destroyed after a terrorist bomb exploded on it near Tavistock Square in London on July 7, 2005. (EVA-LOTTA JANSSON/AFP/Getty Images) 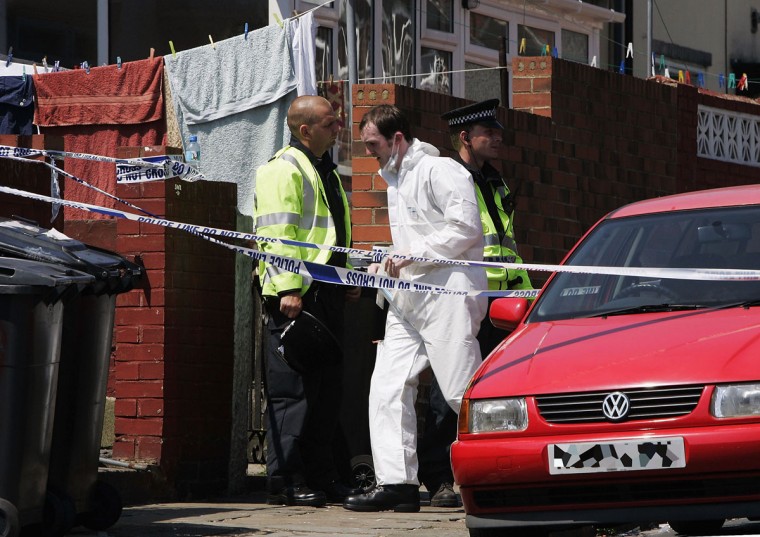 Police officers are seen outside of a house as a search is made of properties suspected of being linked to terrorist activity in connection with the 7/7 bomb attack on the London transport network. (Photo by Matthew Roberts/Getty Images) 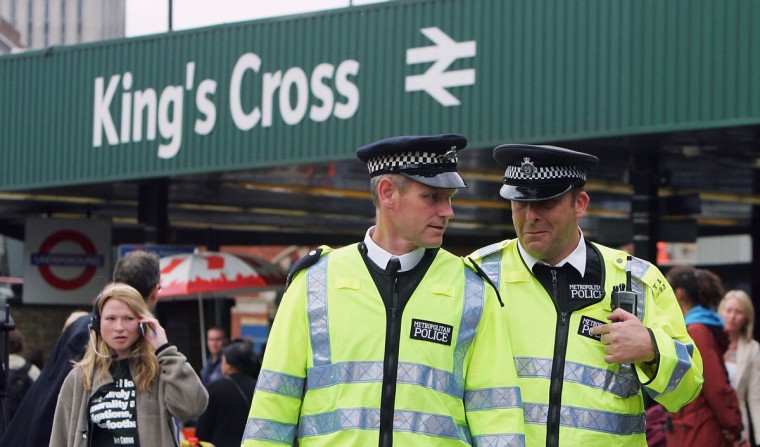 British police officers patrol outside of King’s Cross Station on July 8, 2005 in London, England. More than 50 people were killed and 700 injured during a series of explosions in the morning rush hour the previous day. (Photo by Scott Barbour/Getty Images) 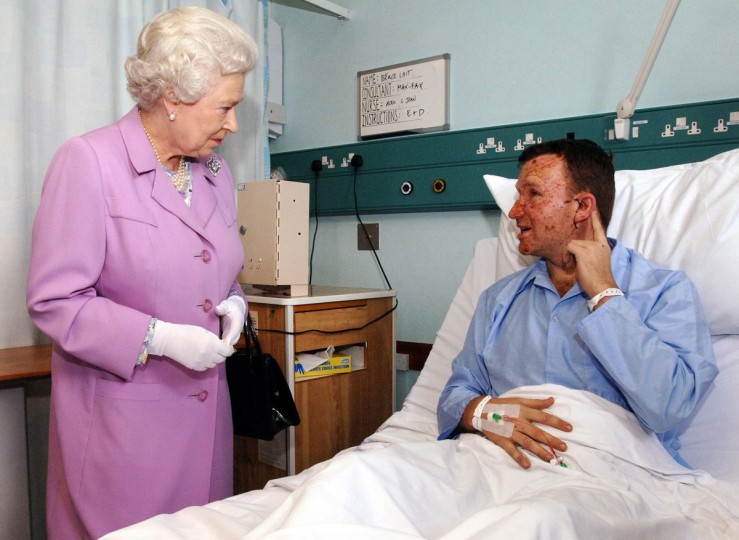 Britain’s Queen Elizabeth II meets Bruce Lait, 32, a professional dancer from Ipswich at the Royal London Hospital in London’s east end, on July 8, 2005. Lait was on the tube train travelling between Aldgate Station and Liverpool Street Station when a bomb exploded. He is explaining to the Queen how the hearing in his left ear was damaged by the blast. He was travelling to London to rehearse for a show he was scheduled to appear in with dance partner Crystal Main. (FIONA HANSON/AFP/Getty Images) 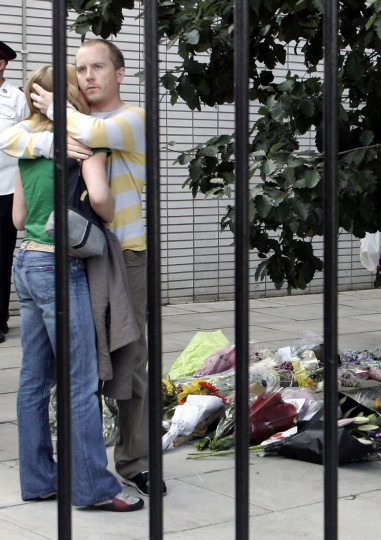 A couple hugs near flowers left in memory of the victims of the bomb attacks at King’s Cross in London on July 9, 2005. In London’s hushed streets, rapidly expanding floral shrines and anguished posters appealing for scraps of information about missing loved ones were a constant reminder of the bombing attacks. (PHILIPPE HUGUEN/AFP/Getty Images) 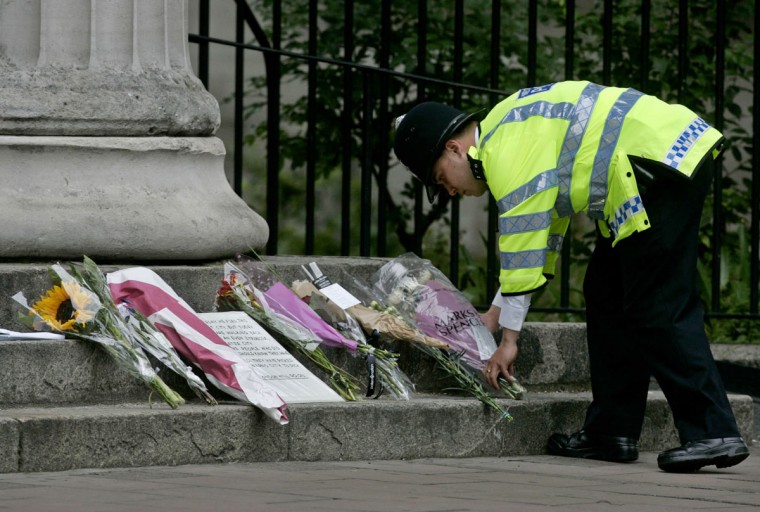 A British police officer lays flowers from a member of the public near the scene where an explosion on a bus took place in central London on July 8, 2005. Commuters in London reluctantly descended into the Underground on Friday morning, attempting to return to routine in the aftermath of four rush-hour blasts that killed at least 50 people. (AP Photo/Matt Dunham) 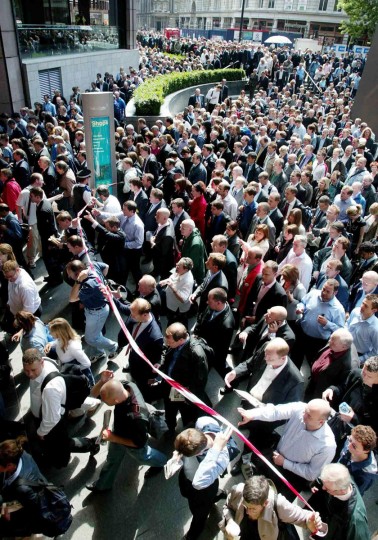 Commuters surge toward Liverpool Street Station as it re-opens July 7, 2005, after a terror attack earlier in the morning, when a bomb exploded in the tunnel near the station. (AP Photo/Gareth Fuller/PA) 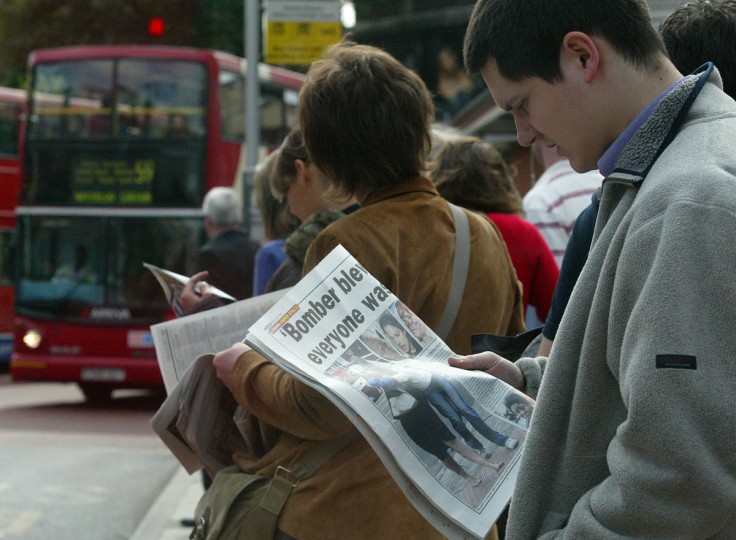 An early morning commuter reads newspaper reports while waiting for a bus at Waterloo Station, London on July 8, 2005. Commuters in London reluctantly descended into the Underground Friday morning, attempting to return to routine in the aftermath of four rush-hour blasts. (AP Photo / Sergio Dionisio) 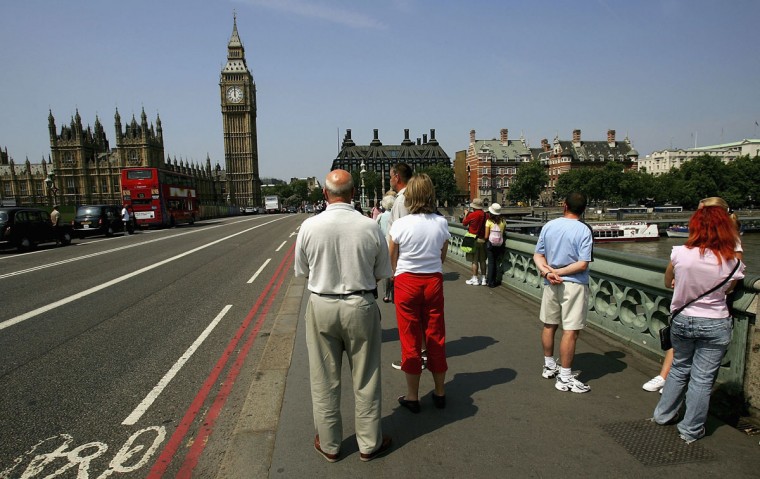 People pause for a two-minute silence in memory of the London bomb victims at Westminster Bridge where traffic stopped on July 14, 2005 London, England.(Photo by Daniel Berehulak/Getty Images) 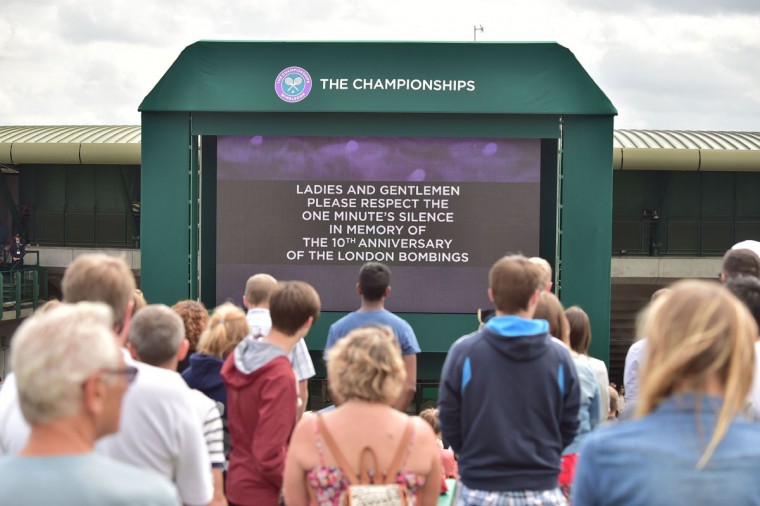 Spectators on Murray Mound (Henman Hill) stand to observe a minute’s silence in memory of the 52 people who were killed in the 2005 London 7/7 suicide bombings on Day Eight of the 2015 Wimbledon Championships at The All England Tennis Club in Wimbledon, southwest London, on July 7, 2015. (LEON NEAL/AFP/Getty Images) 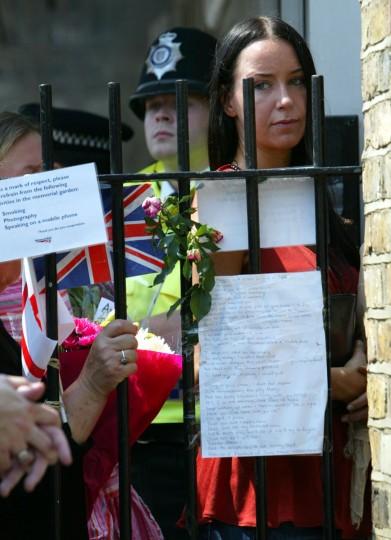 A woman stands in silence in front of King’s Cross station in London, Thursday July 14, 2005, moments after a two-minute silence was held across Britain in memory of the victims of last week’s bomb attacks on the capital which claimed at least 52 lives. (AP Photo/Remy de la Mauviniere) 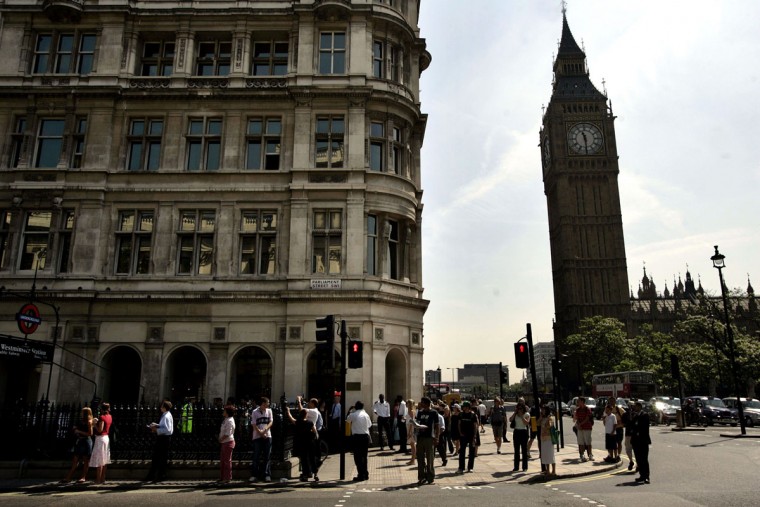 People wait for the alert to finish to go about their normal lives as British police officers block Whitehall, close to Prime Minister Tony Blair’s official residence at 10 Downing Street, in central London, after a suspicious object was spotted, Wednesday July 13, 2005. St. Stephen’s tower is seen on the right. New evidence suggests four suicide bombers, including at least three Britons of Pakistani descent, carried out the terror attacks in London, officials said. Surveillance cameras captured the men as they arrived in the capital 20 minutes before the explosions began. (AP Photo/Lefteris Pitarakis) 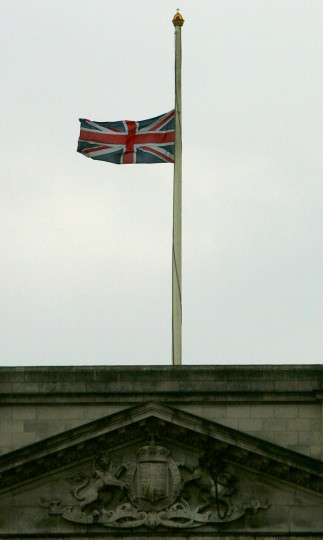 A Union flag flies at half-staff over Buckingham Palace after a series of terrorist blasts that took place in London, Thursday July 7, 2005. (AP Photo/Matt Dunham) 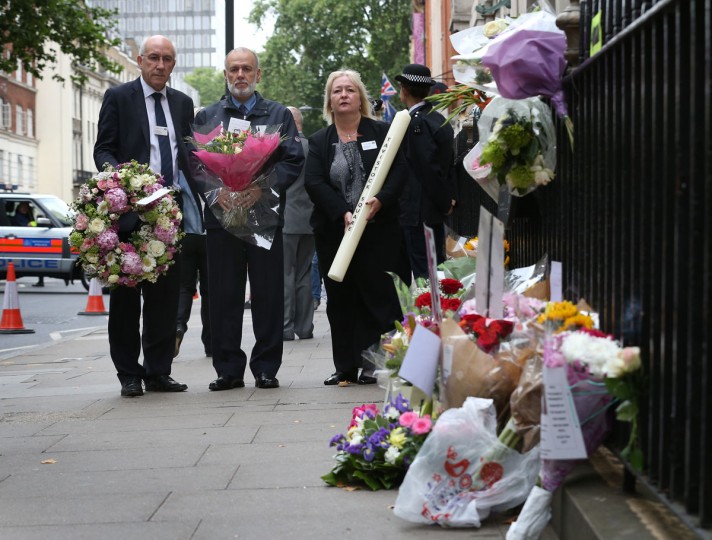 George Psaradakis (second from left), driver of the double decker bus that was targeted by bomber Hasib Hussain in 2005, stands with transport officials as he carries flowers during a remembrance ceremony near Tavistock Square on July 7, 2015 in London, England. Today is the 10th anniversary of the 7/7 bombings, when four suicide bombers struck transport system in central London on July 7, 2005, killing 52 people and injuring more than 770 in simultaneous attacks. (Photo by Peter Macdiarmid/Getty Images) 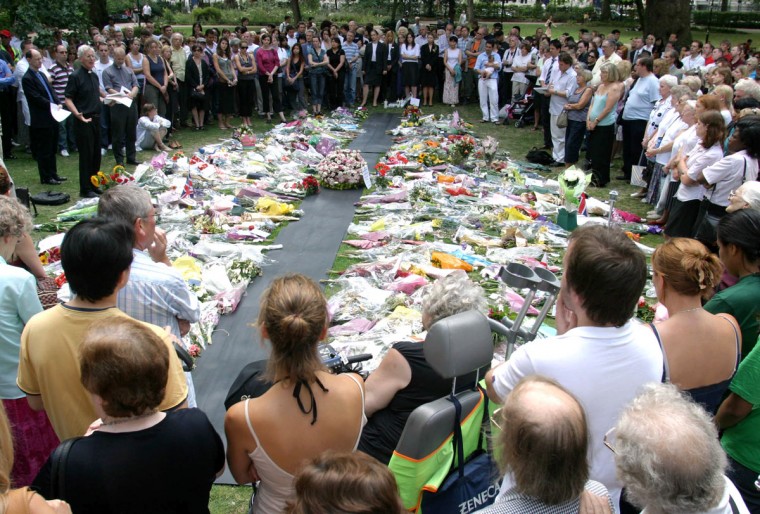 Hundreds of locals and visitors mourn the 53 confirmed dead during an Act of Remembrance ceremony at Russell Square Gardens, in London, Friday, July 15, 2005. (AP Photo/Sergio Dionisio) 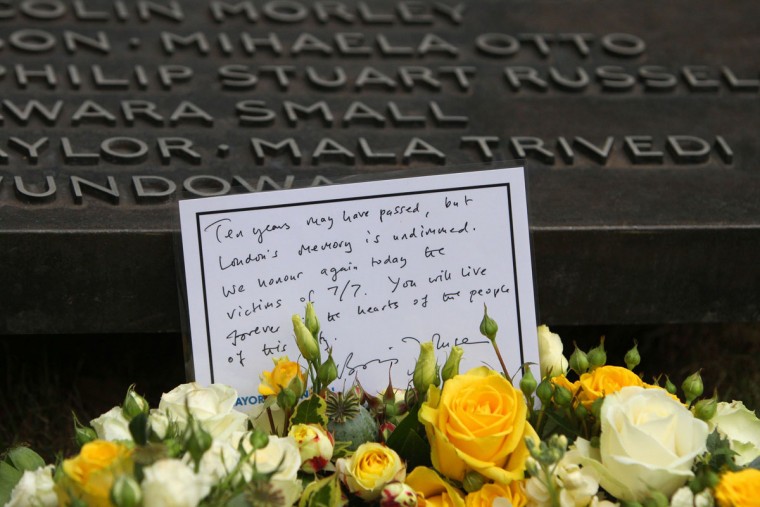 A wreath laid by London Mayor Boris Johnson is left at the July 7 memorial in Hyde Park on July 7, 2015 in London, England. Today is the 10th anniversary of the 7/7 bombings, when four suicide bombers struck transport system in central London, killing 52 people and injuring more than 770 in simultaneous attacks. (Photo by Steve Parson- WPA Pool/Getty Images) 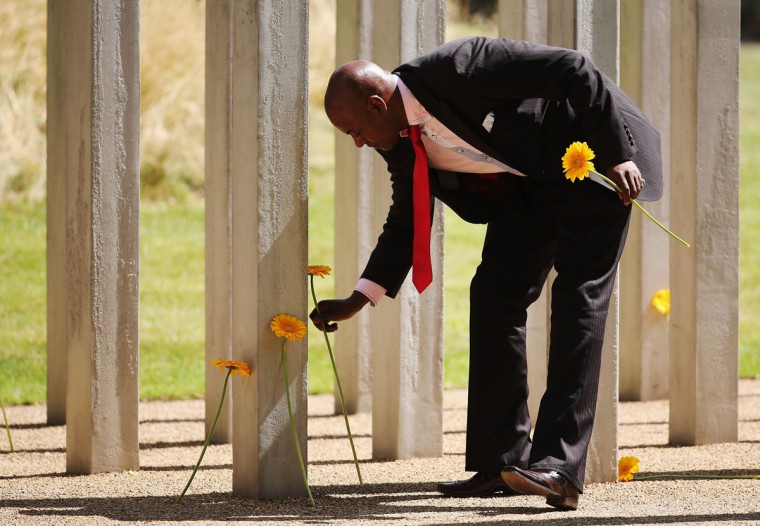 A man lays flowers at the 52 steel pillars memorial to the victims of the July 7, 2005 London bombings in Hyde Park on July 7, 2015 in London, England. It is the 10th anniversary of the 7/7 London bombings. (Photo by Dan Kitwood/Getty Images) 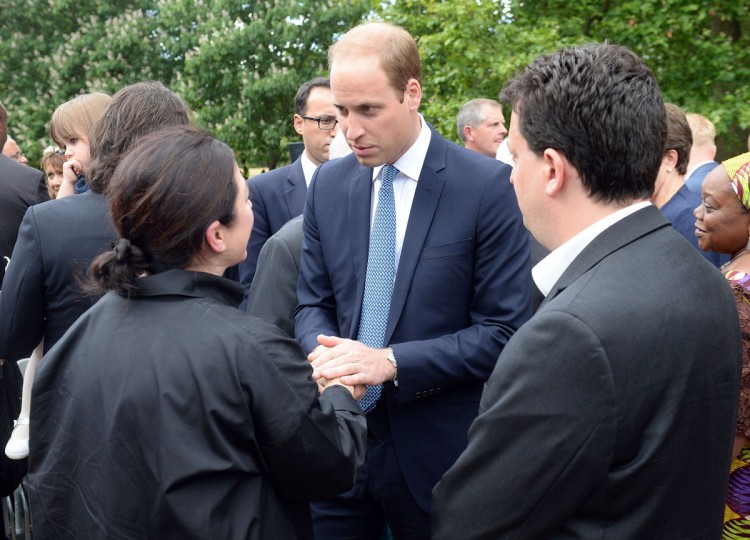 Prince William, Duke of Cambridge speaks to 7/7 survivor Gill Hicks (left) following a service at the July 7 memorial in Hyde Park to commemorate the 10th anniversary of the London 7/7 bombings on July 7, 2015 in London, England. (Photo by Anthony Devlin – WPA Pool/Getty Images)