Like ancient striated canyons shaped from water pulsing through the earth, David Knopp’s wood sculptures form flowing layers that evoke the essence of the natural world. The veneered pieces suggest movement, like wind rustling a branch, or waves swirling in a stormy ocean. Both artistic and practical, the sculptures serve as tables, chairs and lamps. “I just like the idea of functionality in art. I always have,” Knopp says. Only one of the 20 or so wood items is purely aesthetic: “Metamorphosis,” a thirteen-foot colossus, took about six months to complete 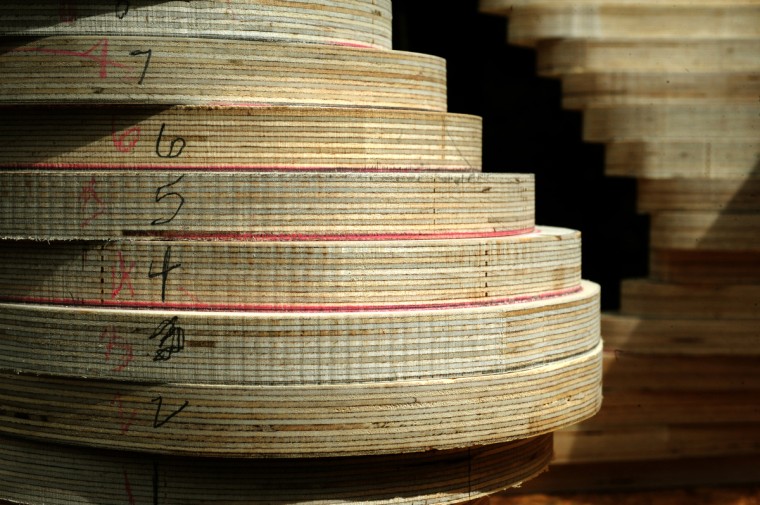 David Knopp numbers each laminate piece before gluing them together. These wooden layers will be sculpted into a chair. (Algerina Perna/Baltimore Sun) 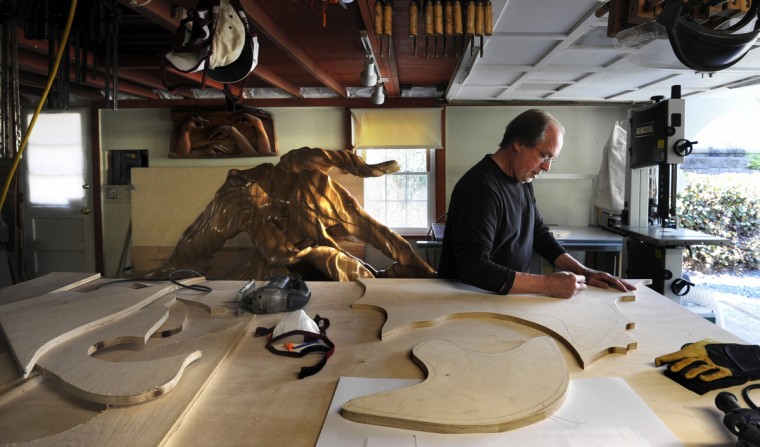 Artist David Knopp draws a pattern on plywood for a chair part before cutting it out with a band saw. In the background is a stack laminate sculpture he named, “Metamorphosis.” The thirteen-foot work of art took about six months to create, and is so named because it’s his first sculptural piece that does not serve a practical function. (Algerina Perna/Baltimore Sun) 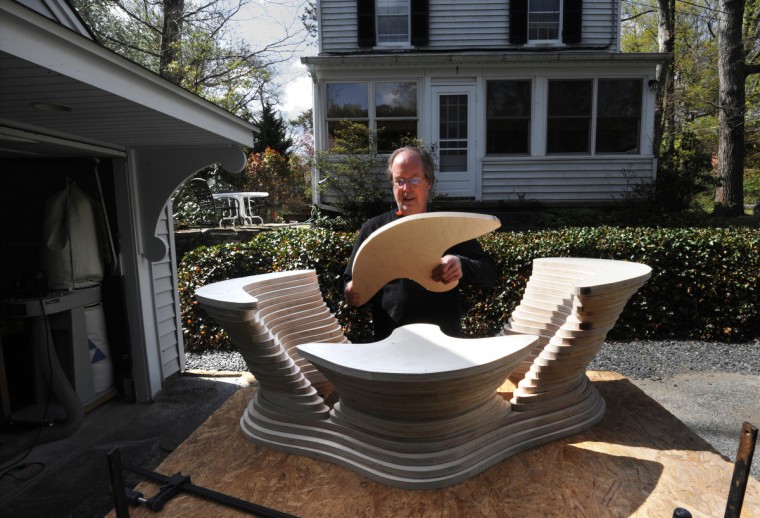 Outside his workshop at home, artist David Knopp adds a layer of plywood to a sculpture that will also serve a practical purpose as a chair. (Algerina Perna/Baltimore Sun) 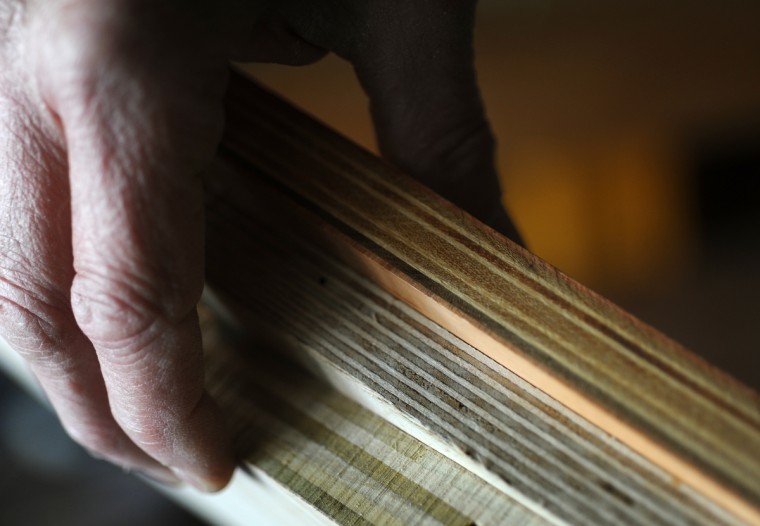 To make his functional sculpture, David Knopp uses many kinds of plywood for different effects, including from front to back: poplar, Baltic birch and tropical plywood. (Algerina Perna/Baltimore Sun) 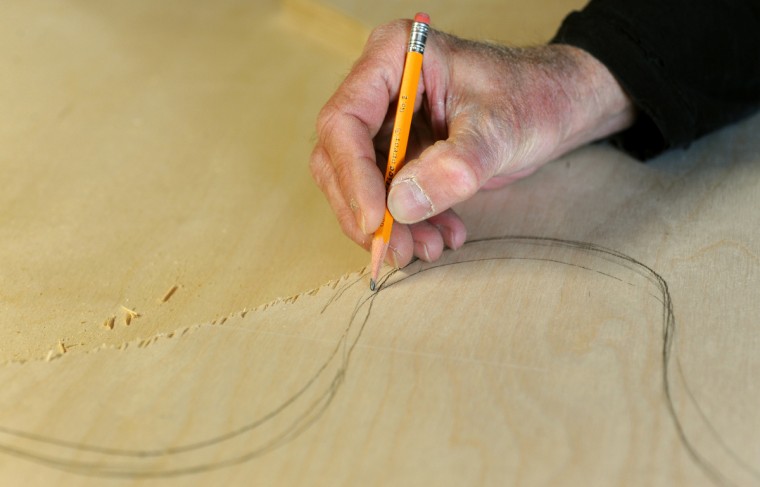 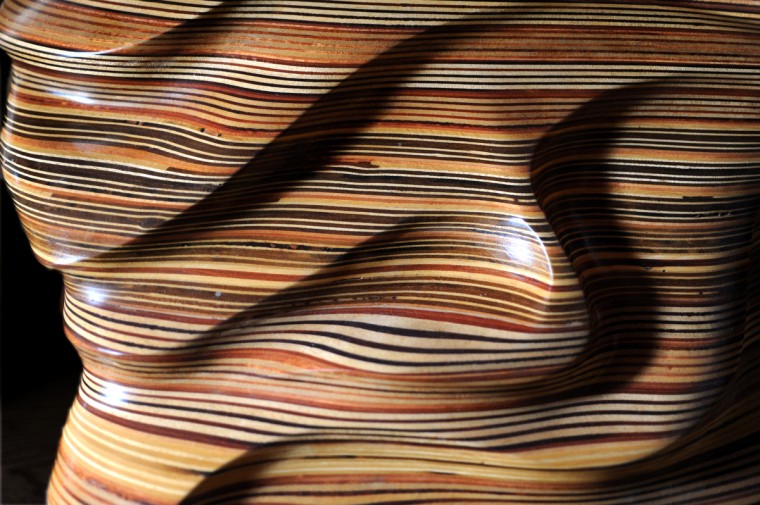 David Knopp uses stack lamination- gluing stacks of plywood together- to create functional sculptures, such as this table base. (Algerina Perna/Baltimore Sun) 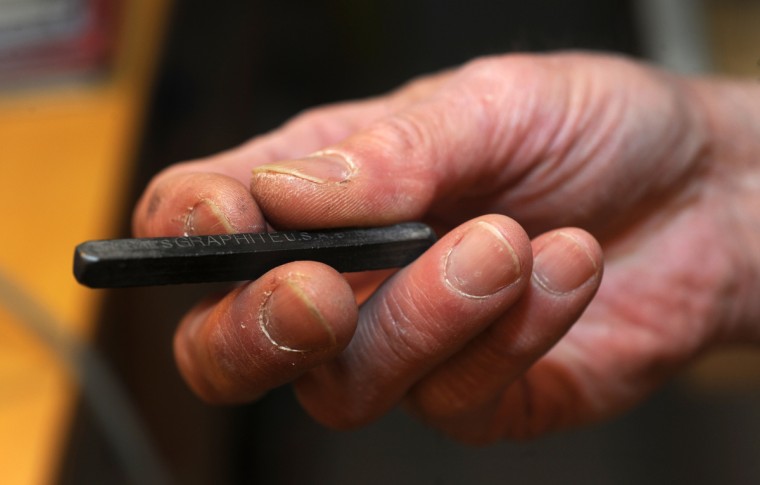 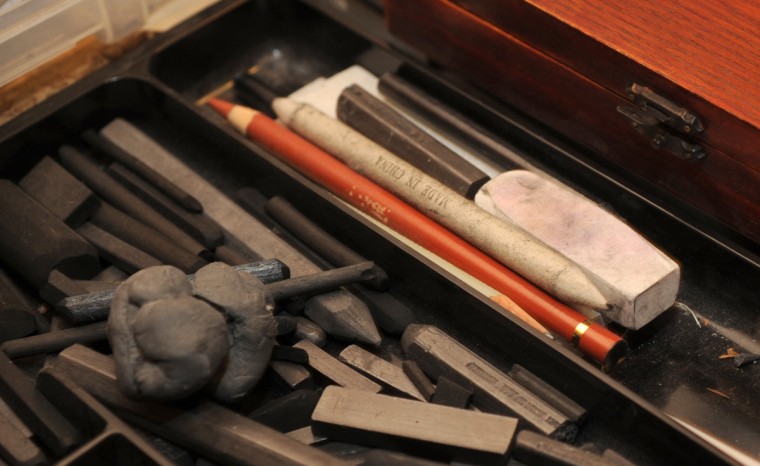 Charcoal and other drawing utensils fill a tray next to David Knopp’s easel where he draws mainly trees. (Algerina Perna/Baltimore Sun) 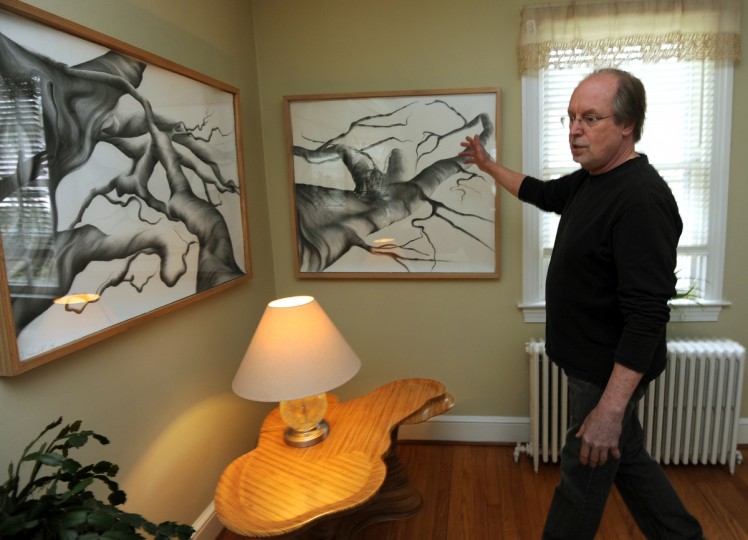 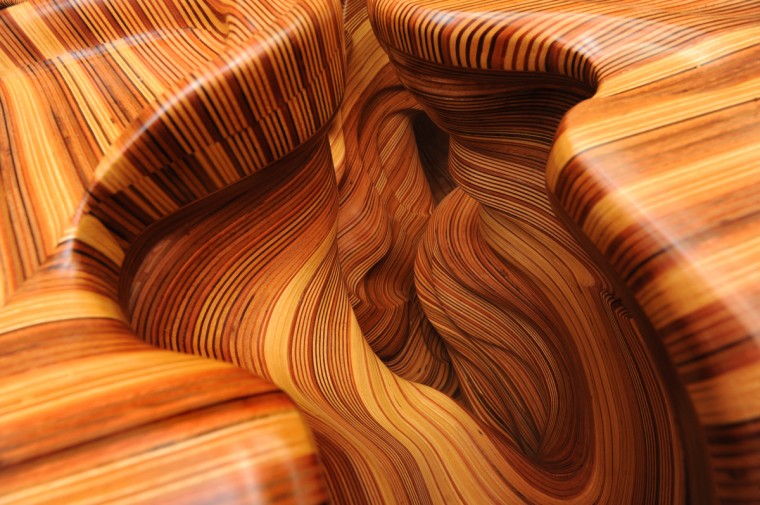 Like the narrow slots of Arizona’s Antelope Canyon, David Knopp’s stack laminated sculptures form flowing layers and substrata of patterns and colors, such as this table sculpture he created. (Algerina Perna/Baltimore Sun) 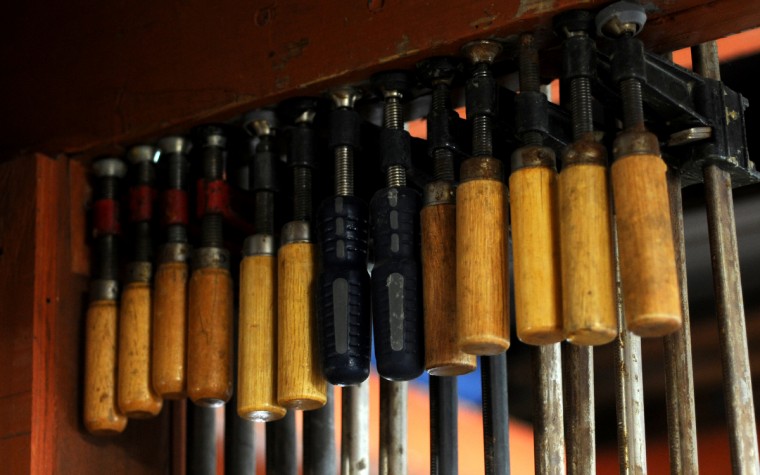 Wood tools hang from the ceiling in David Knopp’s workshop where he creates functional wooden sculptures such as tables and chairs. (Algerina Perna/Baltimore Sun) 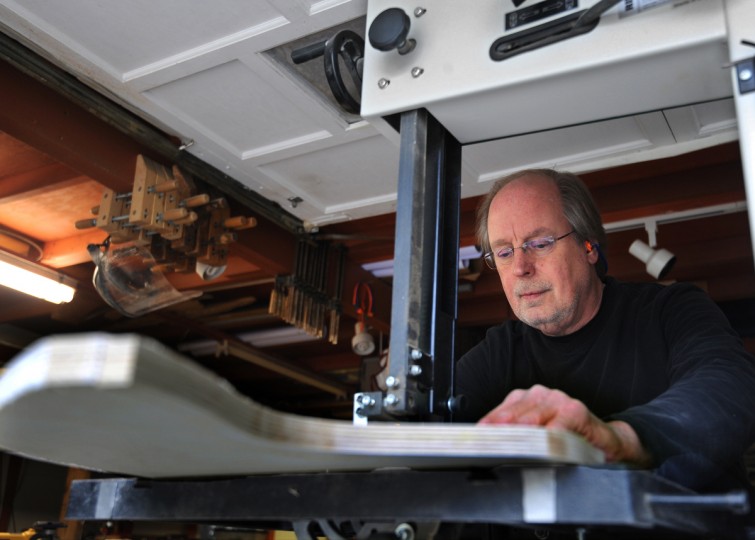 In his garage workshop, David Knopp guides a piece of plywood through a band saw. The plywood will be used to make a sculptural chair. (Algerina Perna/Baltimore Sun) 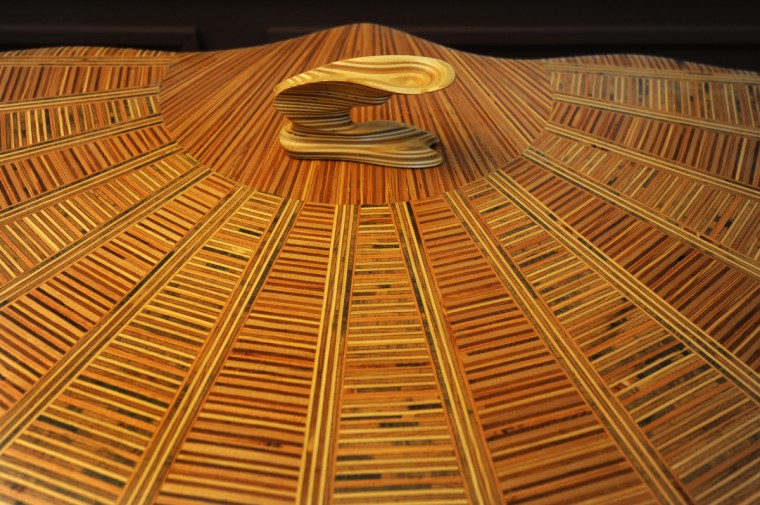 A miniature table sculpture sits on top of a large table top designed in the shape of a shell by David Knopp using a stack laminate process. Knopp creates forms from plywood shapes by gluing the pieces together in a terraced pattern which are then carved. (Algerina Perna/Baltimore Sun) 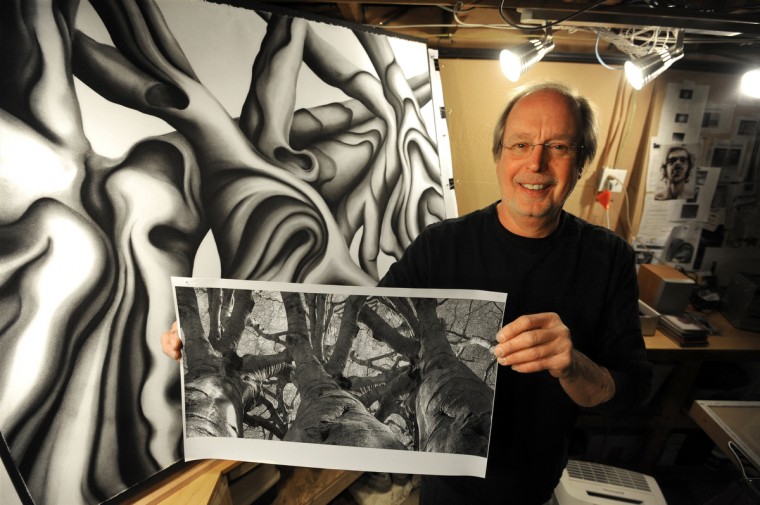 Artist David Knopp works on his drawings and wood sculpture at home. He took the photograph he’s holding and used photoshop to merge three trees together. Behind him is a drawing he did based on the photograph. (Algerina Perna/Baltimore Sun) 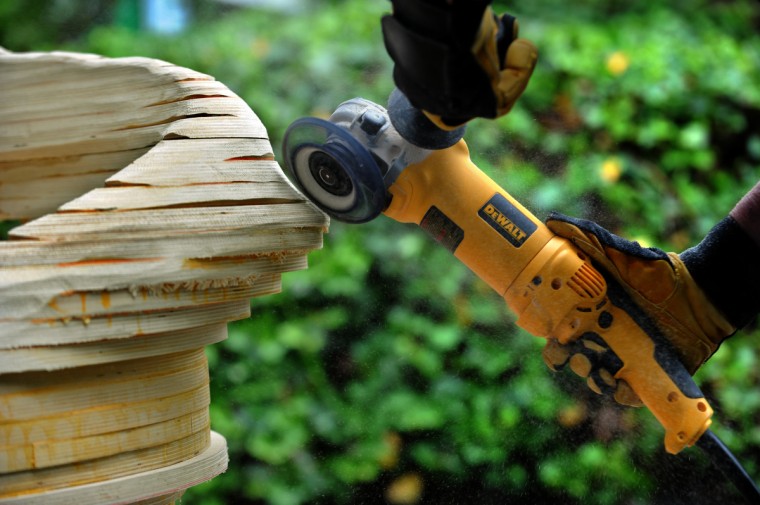 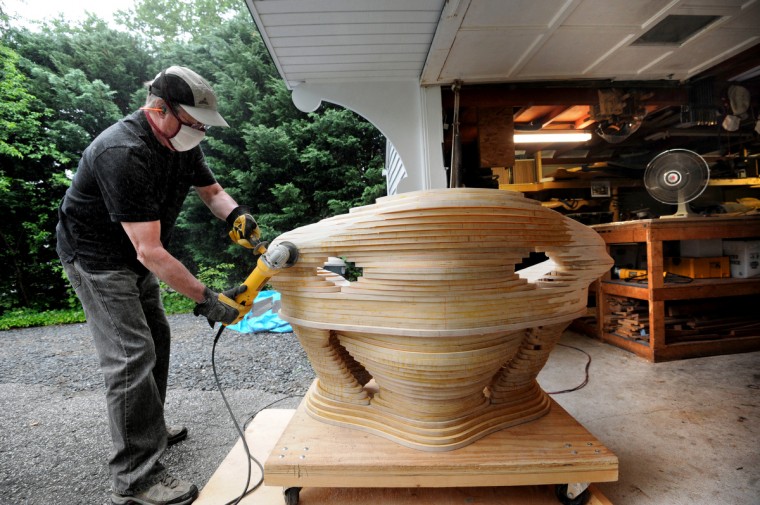 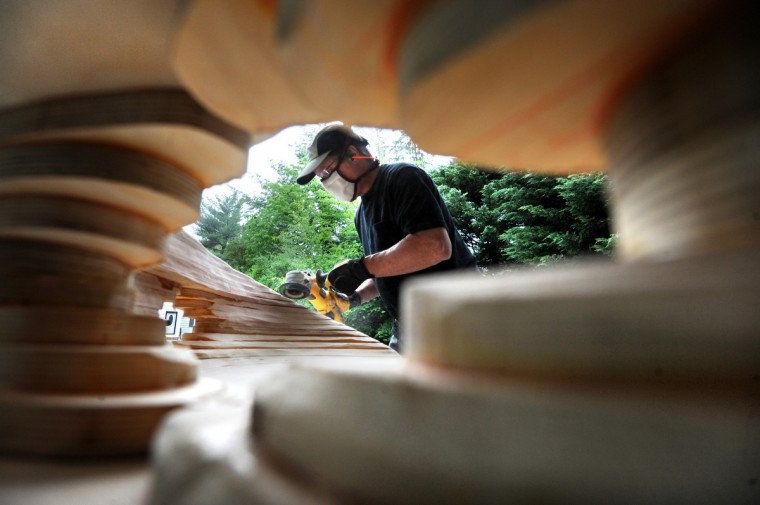 Wood sculptor and artist David Knopp is pictured through an opening in the back of a chair he is making as he uses an angle grinder to carve the chair. (Algerina Perna/Baltimore Sun)

Knopp, 65, uses a technique called “stack lamination” where several layers of a composite material -in this case, plywood- are laminated together, creating a unique pattern that is accentuated when oiled.

Depending on the pieces, he chooses a variety of woods including poplar, Baltic birch and tropical, based on durability and patterns within the wood.

Knopp is largely self-taught with the exception of drawing classes he took at what is now Community College of Baltimore County, Essex. His first finished piece, a coffee table he built in the 1970’s, convinced him to continue.

By his third sculpture, a table with a shell-shaped top, he described what he called an epiphany. “Oh My God! I can make these things any shape I like. There were no limits except for the functional aspect of it. If it’s going to be a table, it has to have a surface you can put things on, and it has to be a certain height.”

Trees have always held a fascination for Knopp. Remembering his high school years hiking through Loch Raven reservoir with friends, Knopp says, “I would be the guy to see the piece of driftwood that would look like something.”

As adept at drawing as he is in woodworking, many large charcoal likenesses of trees adorn several rooms in his home, and have been sold to the public. “I like a lot of movement in my drawings and I carry that into my sculpture,” Knopp says. In several of his drawings, trees transform into human forms, with branches becoming arms, and trunks transmuting into human faces.

His artwork has won recognition from many sources including the Baker Artist Award in 2012, and an exhibit at the Baltimore Museum of Art. That same year, he won an award from the Maryland State Arts Council. In 2013, he was a semi-finalist for The Sondheim Prize. Last year, one work of art was accepted in SOFA (Sculptural Objects and Functional Art) Chicago.

Knopp uses computers for his job at a commercial printing company, but works intuitively to create his art, starting with a pencil and paper to make sketches and templates for his sculptures before moving to the cutting, gluing, sculpting, and final stages. Knopp’s work style is as fluid as the character of his sculptures. While stacking or sculpting, he continually makes adjustments as he works based on his aesthetic eye.

Solid yet elegant, the sculptures infer what is not there: the missing pieces carved out of the undulating shapes that still remain. Knopp says, “You won’t find a straight line in my sculpture. It just doesn’t happen.” For more information, go to davidknopp.com

« Nationwide celebrations for the SCOTUS decision on same-sex marriage » President Obama delivers the eulogy at the funeral service for Rev. Clementa Pinckney