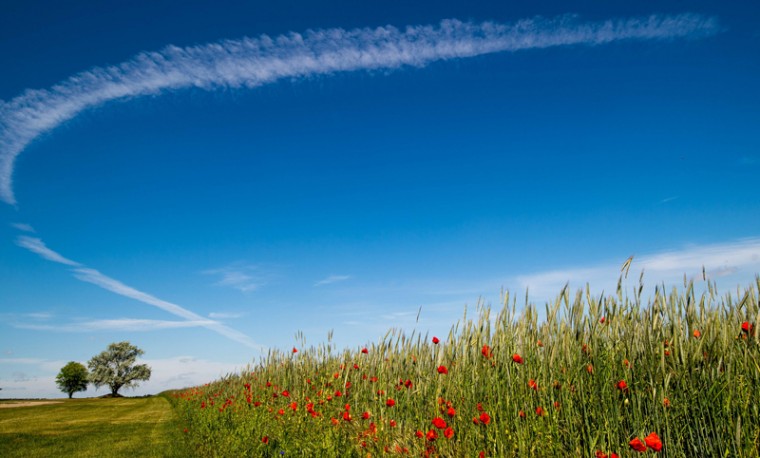 Red poppy flowers bloom in a field in Lietzen, eastern German on Tuesday as the sun shines. (PATRICK PLEUL/AFP/Getty Images) 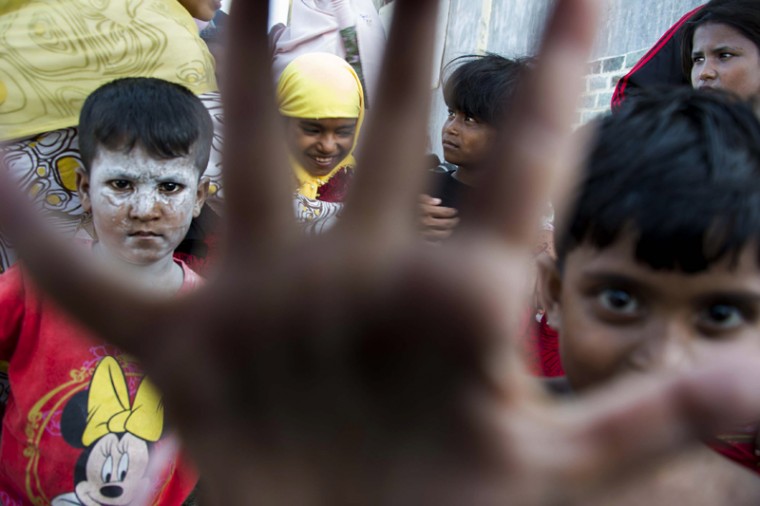 Rohingya migrant children from Myanmar play during a visit by U.S. Assistant Secretary of State Anne Richard (not seen) at the confinement camp for Rohingya and Bangladesh migrants in Kuala Cangkoi in Indonesia’s Aceh province on Tuesday. President Barack Obama has urged Myanmar to end discrimination against its ethnic Rohingya minority if it wants to succeed in its democratic transition from decades of junta rule. (CHAIDEER MAHYUDDIN/AFP/Getty Images) 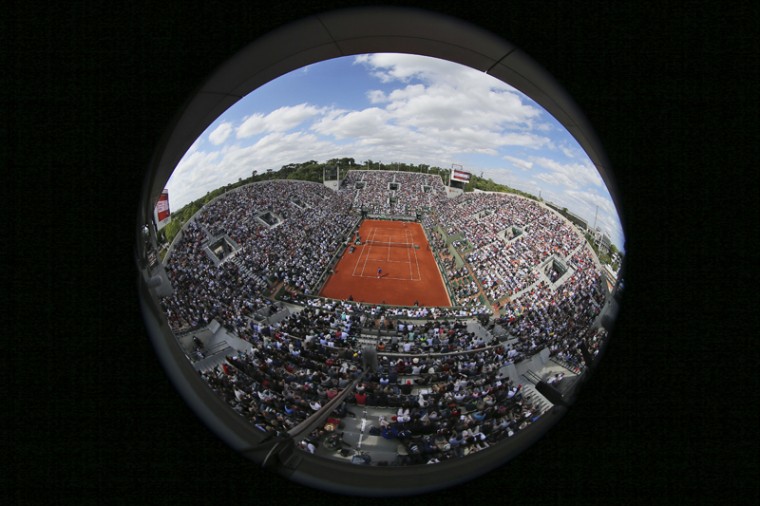 In this image taken with a circular fisheye lens, Switzerland’s Roger Federer plays the quarterfinal match of the French Open tennis tournament against Switzerland’s Stan Wawrinka on Suzanne Leglen court at the Roland Garros stadium, in Paris on Tuesday. (David Vincent/AP) 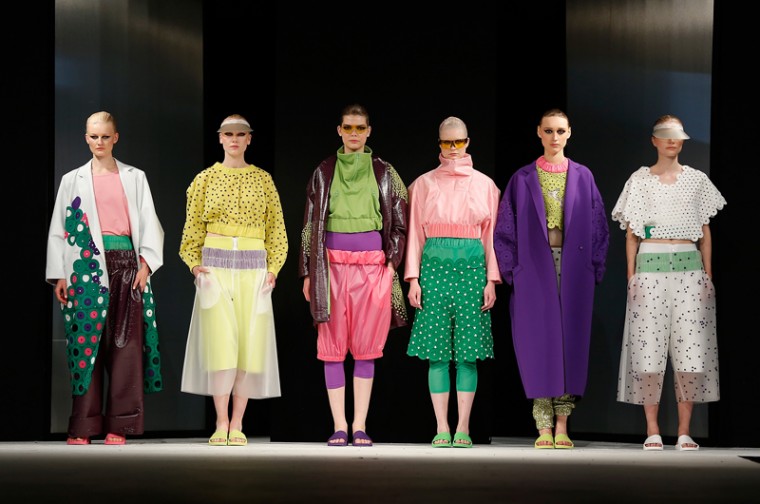 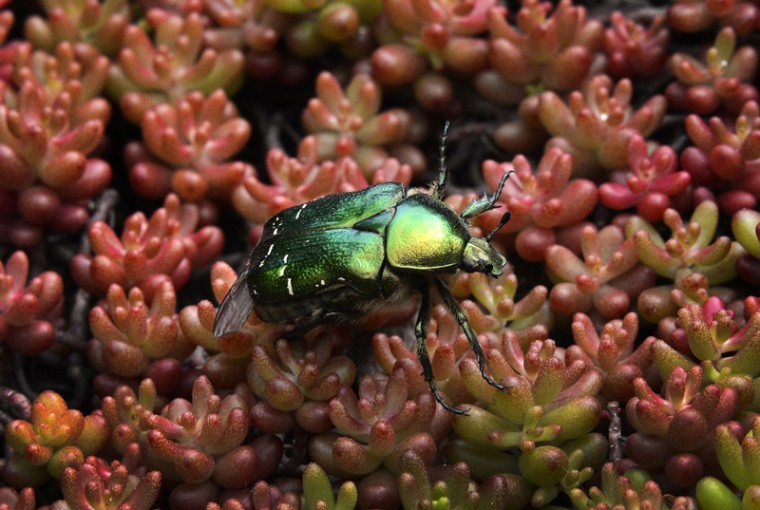 A goldsmith beetle crawls over stone-breaker flowers in a garden outside Moscow on Tuesday. (YURI KADOBNOVYURI KADOBNOV/AFP/Getty Images) 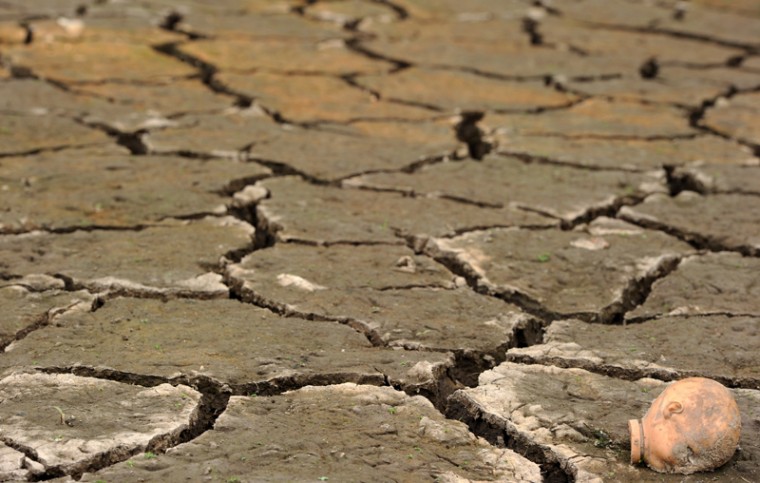 The head of a doll lies on the dried bottom of the Los Laureles dam reservoir that supplies water for Tegucigalpa, on the outskirts of the capital, on Tuesday. Honduras has been hit by a major drought caused by “El Nino” climate phenomenon, a band of unusually warm Pacific ocean temperatures, which in the past has been linked to numerous floods, droughts and bush fires from South America to Australia. The drought has killed thousands of cattle and dried up crops. (ORLANDO SIERRA/AFP/Getty Images) 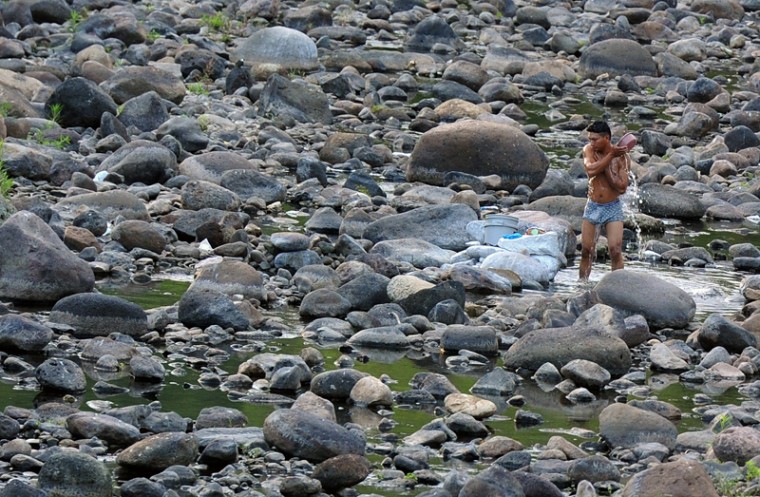 A man takes a bath at the Guacerique river – now a trickle – which flows into the Los Laureles dam reservoir that supplies water for Tegucigalpa, on the outskirts of the capital, on Tuesday. Honduras has been hit by a major drought caused by “El Nino” climate phenomenon, a band of unusually warm Pacific ocean temperatures, which in the past has been linked to numerous floods, droughts and bush fires from South America to Australia. The drought has killed thousands of cattle and dried up crops. (ORLANDO SIERRA/AFP/Getty Images) 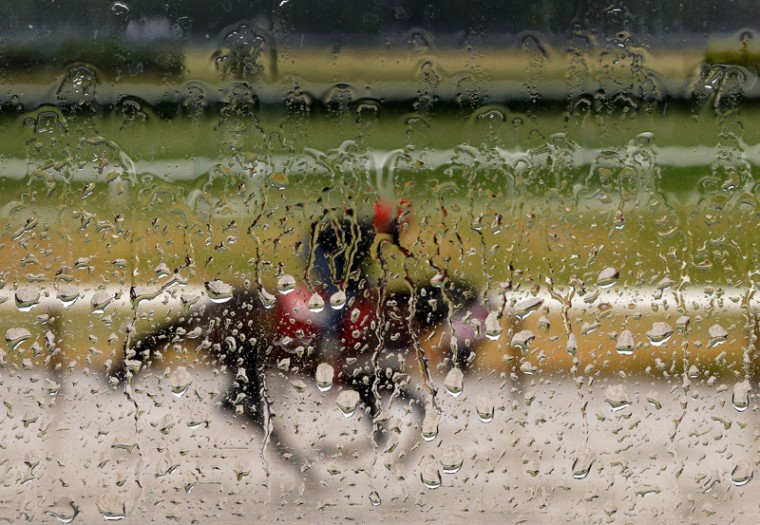 Rain water coats the window of an observation tower as an exercise rider guides a horse around the main track at Belmont Park on Tuesday. Kentucky Derby and Preakness Stakes winner American Pharoah will try for a Triple Crown on Saturday in the Belmont Stakes horse race. (Julie Jacobson/AP) 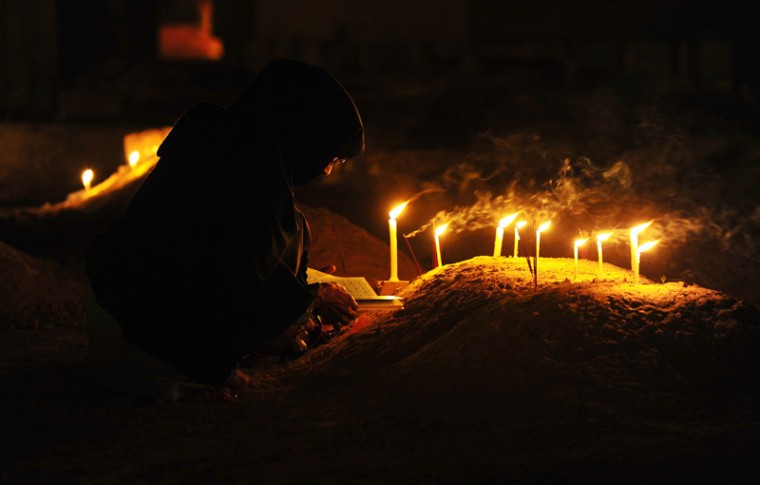 An Indian Muslim woman reads the Quran as she offers prayers beside the grave of a relative in a local graveyard on the occasion of Shab-e-Barat in Allahabad on Tuesday. Muslims across the country observe the holy Shab-e-Barat, the night of fortune, gathering at mosques offering nightlong special prayers besides visiting graves of their near and dear ones, as they seek Allah’s blessings for the departed souls. (Sanjay Kanojia/AFP/Getty Images) 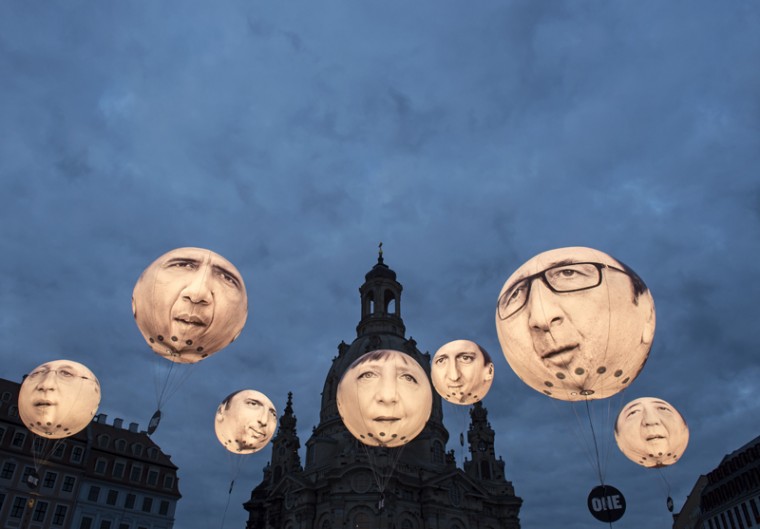 In this Wednesday file photo, activists of the international campaigning and advocacy organization ONE install illuminated balloons with portraits of the G7 heads of state in front of the Frauenkirche cathedral (Church of Our Lady) prior the G7 Finance Ministers meeting in Dresden, eastern Germany. The G7 Finance Ministers meeting was held in Dresden over the weekend. (Jens Meyer/AP) 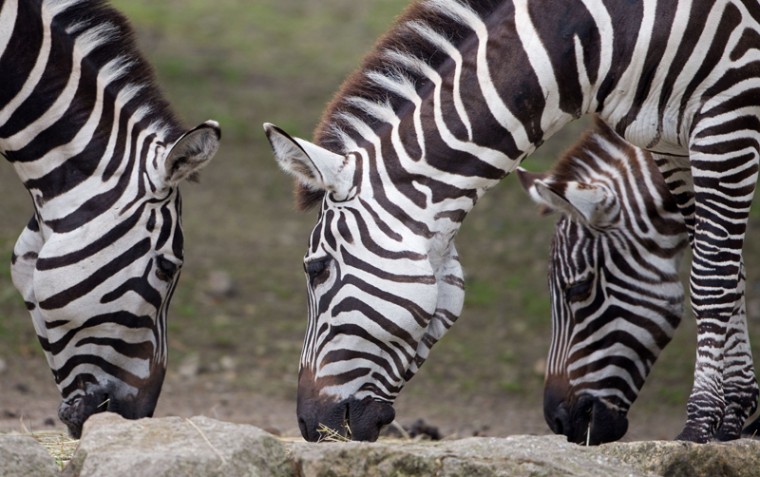 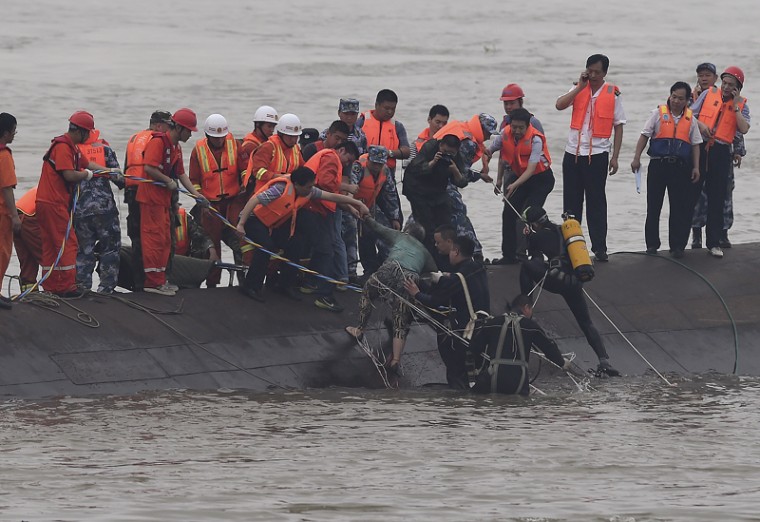 In this photo released by China’s Xinhua News Agency, rescuers save a survivor, center, from the overturned passenger ship in the Jianli section of the Yangtze River in central China’s Hubei Province on Tuesday. Rescuers pulled several survivors to safety after hearing cries for help from inside a capsized cruise ship that went down overnight in a storm on China’s Yangtze River, state broadcaster CCTV said. (Cheng Min/Xinhua via AP) 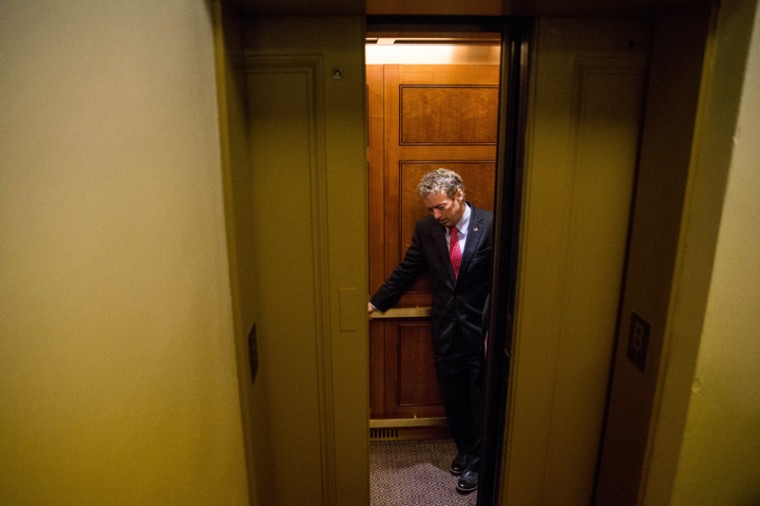 Republican presidential candidate, Sen. Rand Paul, R-Ky. departs in an elevator after speaking at a news conference on Capitol Hill in Washington on Tuesday, calling for the 28 classified pages of the 9/11 report to be declassified. Paul has been voicing his dissent in the Senate against a House bill backed by the president that would end the National Security Agency’s collection of American calling records while preserving other surveillance authorities. (Andrew Harnik/AP) 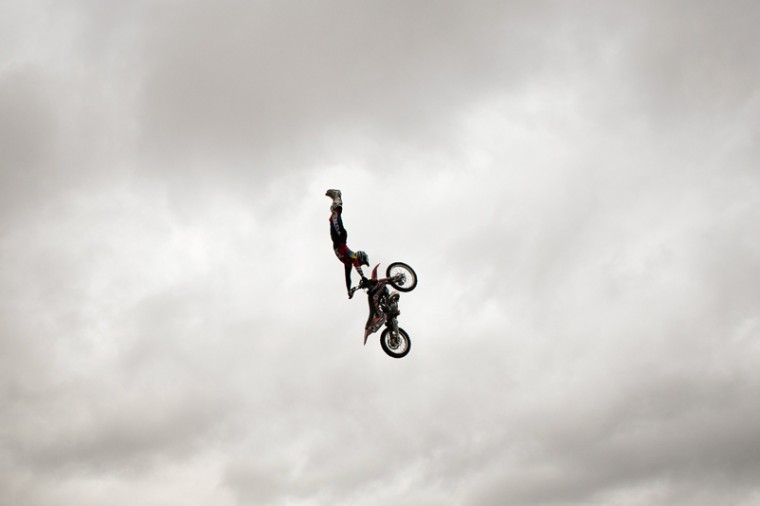 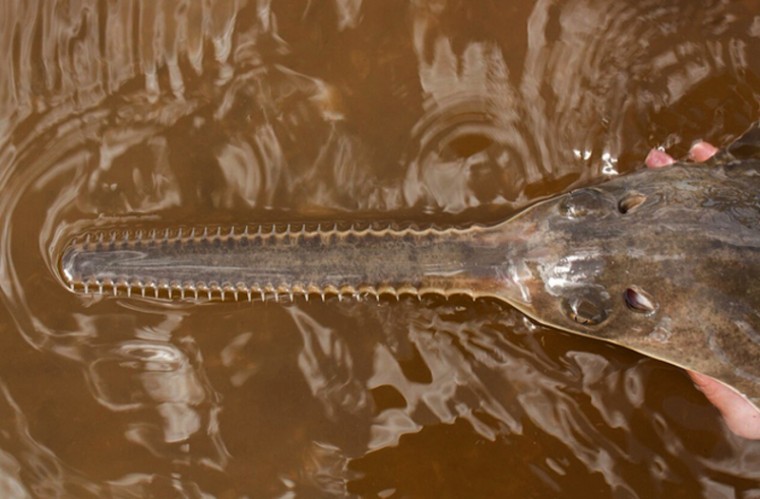 Smalltooth sawfish are on the verge of extinction. But scientists have discovered that some of the fish, perhaps in an effort to survive, have resorted to “virgin births” in the wild. (Florida Fish and Wildlife Conservation Commission)