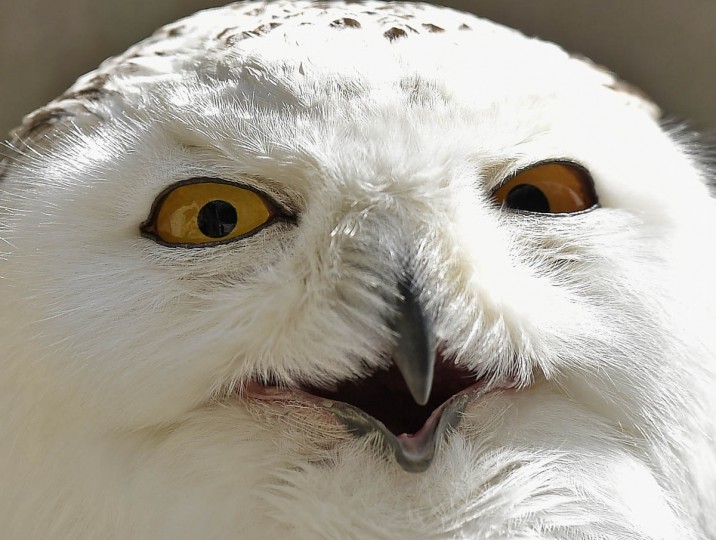 A snowy owl squints in the sun at the zoo in Gelsenkirchen, Germany, on a spring Wednesday, May 20, 2015. (AP Photo/Martin Meissner) 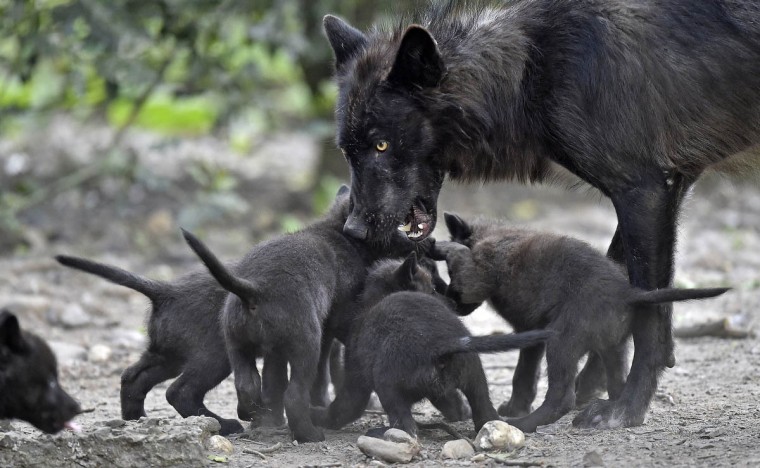 Little one month old wolves playing with the pack at the zoo in Gelsenkirchen, Germany, on a spring Wednesday, May, 20, 2015. (AP Photo/Martin Meissner) 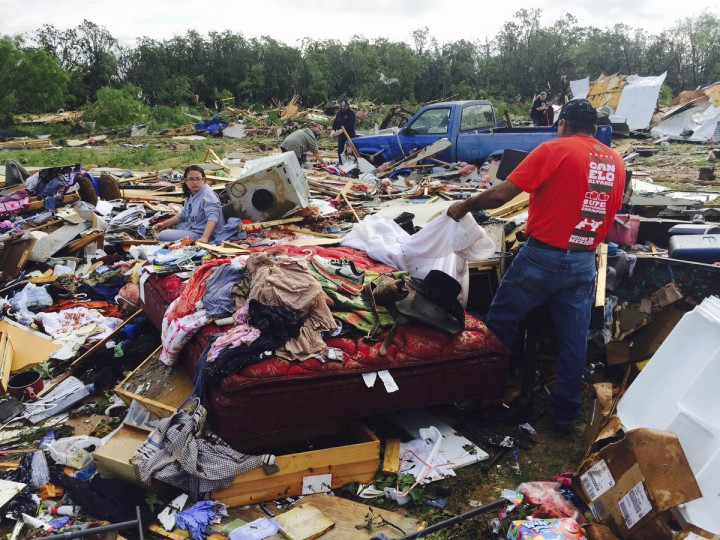 Residents sift through their belongings, Wednesday, May 20, 2015, after a tornado, the night before, destroyed homes near Balsora, Texas about 45 miles northwest of Fort Worth. A lingering storm system in North Texas has spawned at least two tornadoes, damaged buildings and flooded roads. The National Weather Service issued a flash flood watch Wednesday for the Dallas and Fort Worth areas. (Joyce Marshall/The Fort Worth Star-Telegram via AP) 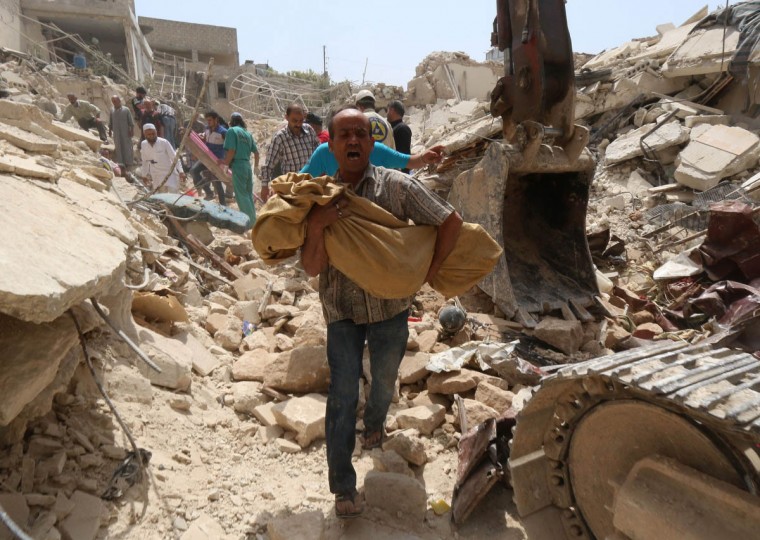 A Syrian man carries a body after it was removed from the rubble of buildings following a reported barrel bomb attack by government forces on the Qadi Askar district of the northern Syrian city of Aleppo on May 20, 2015. (Zein al-Rifai/Getty Images) 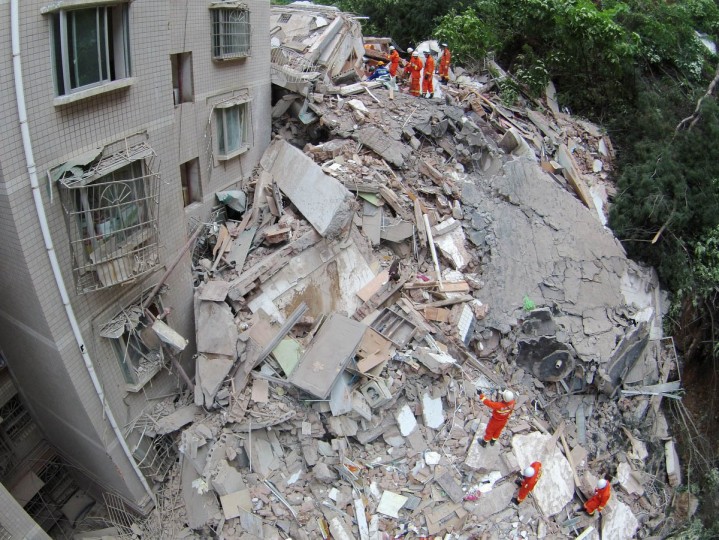 Rescuers look for survivors in the ruins of a collapsed nine story residential apartment in Guiyang, southwest China’s Guizhou province on May 20, 2015. The collapse, triggered by a landslide on a nearby hill, has affected 35 households with the death toll still unknown, state media reported. (Getty Images) 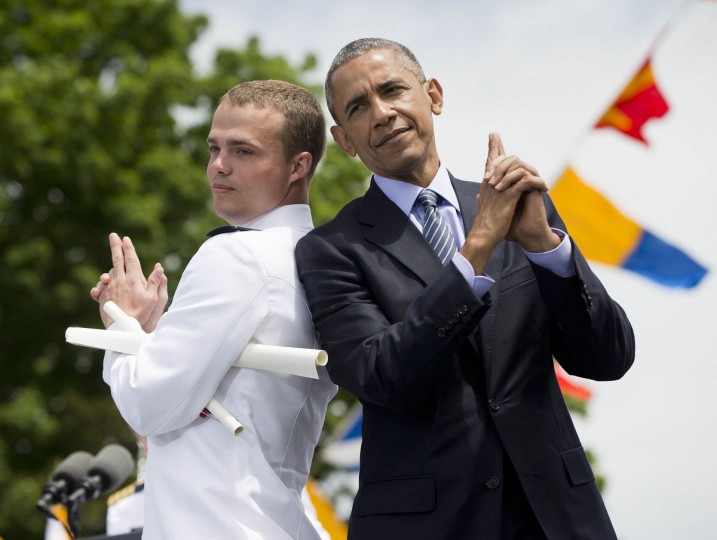 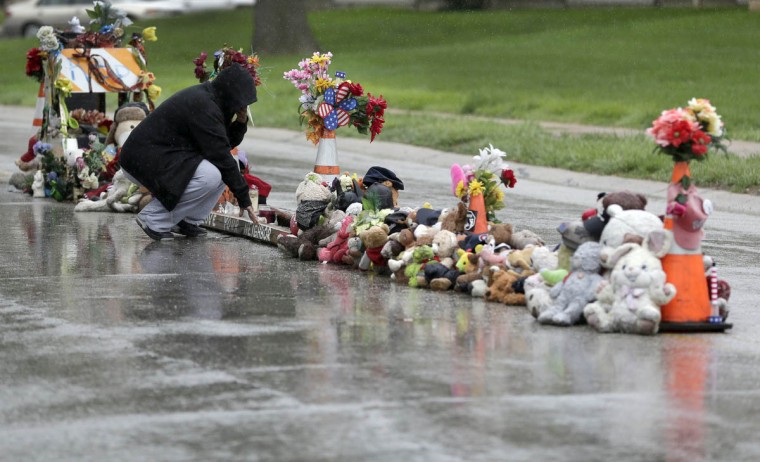 Lala Moore pauses silently before helping others remove items left at a makeshift memorial to Michael Brown Wednesday, May 20, 2015, in Ferguson, Mo. The memorial that has marked the place where Brown was fatally shot by a police officer in August has been removed and will be replaced with a permanent plaque, Ferguson’s Mayor James Knowles said Wednesday. (AP Photo/Jeff Roberson) 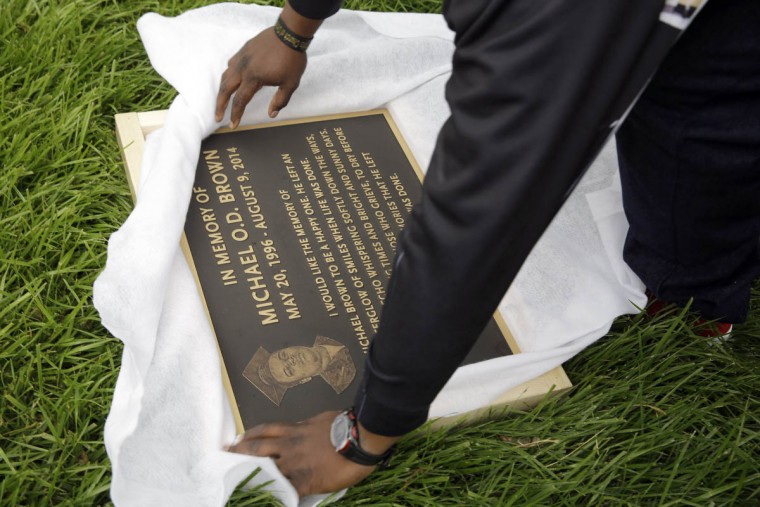 Michael Brown Sr. unwraps a plaque remembering his son, Michael Brown, to show volunteers as they remove items left at a makeshift memorial to Michael Brown Wednesday, May 20, 2015, in Ferguson, Mo. The memorial that has marked the place where Brown was fatally shot by a police officer in August has been removed and will be replaced with a permanent plaque. (AP Photo/Jeff Roberson) 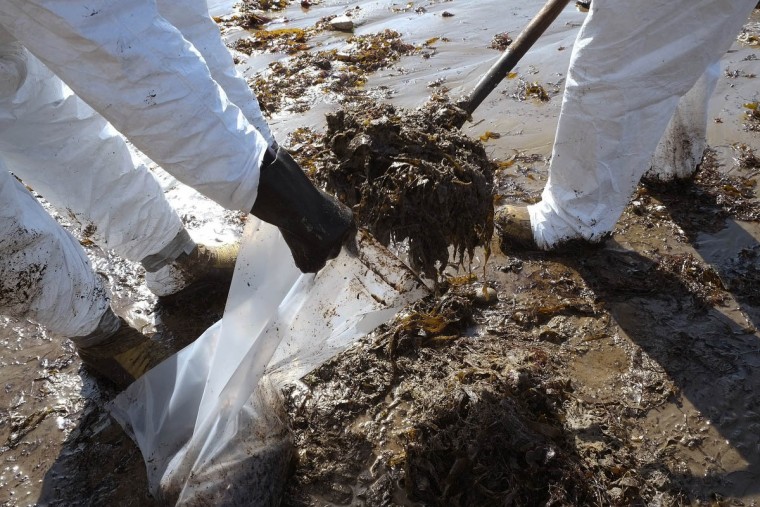 Crews from Patriot Environmental Services collect oil-covered seaweed and sand from the shoreline at Refugio State Beach, north of Goleta, Calif., Wednesday, May 20, 2015. A broken onshore pipeline spewed oil down a storm drain and into the ocean for several hours Tuesday before it was shut off, creating a slick some 4 miles long about 20 miles west of Santa Barbara. (AP Photo/Michael A. Mariant) 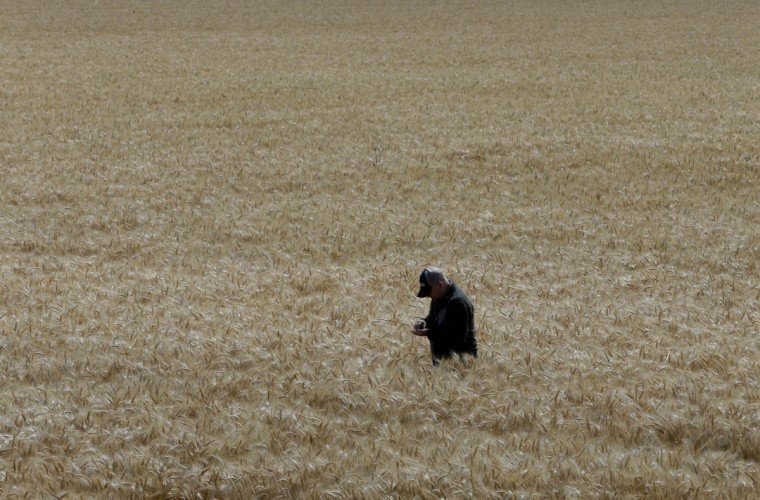 Gino Celli inspects wheat nearing harvest on his farm near Stockton, Calif. Celli, who farms 1,500 acres of land and manages another 7,000 acres, has senior water rights and draws his irrigation water from the Sacramento-San Joaquin River Delta. Farmers in the Sacramento-San Joaquin River Delta who have California’s oldest water rights are proposing to voluntarily cut their use by 25 percent to avoid the possibility of even harsher restrictions by the state later this summer as the record drought continues.(AP Photo/Rich Pedroncelli) 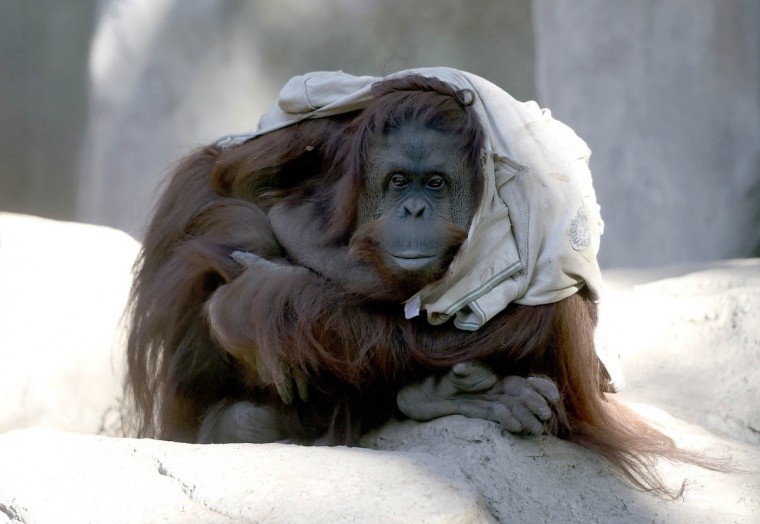 Sandra, a 29-year-old orangutan in her pit at Buenos Aires’ zoo, on May 20, 2015. Sandra got cleared to leave a Buenos Aires zoo that was her home for 20 years, after a court ruled she was entitled to more desirable living conditions. (Juan Mabromata/Getty Images) 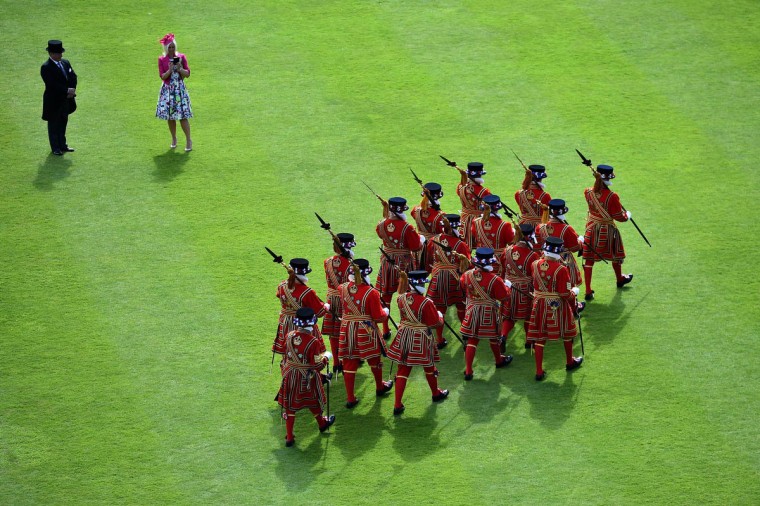 Yeomen of the Guard march during a garden party in the grounds of Buckingham Palace in central London, May 20, 2015. (Ben Stansall/Getty Images) 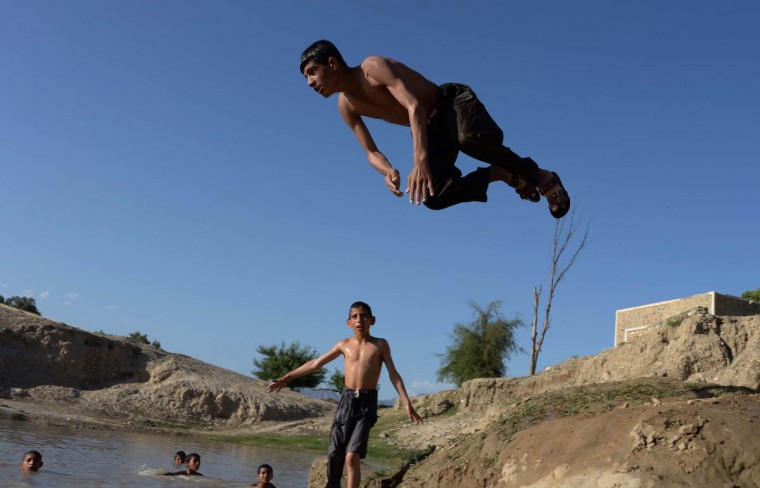 An Afghan youth dives into a ditch of muddy water to beat the heat on the outskirts of Jalalabad in Nangarhar province. (Noorullah Shirzada/Getty Images) 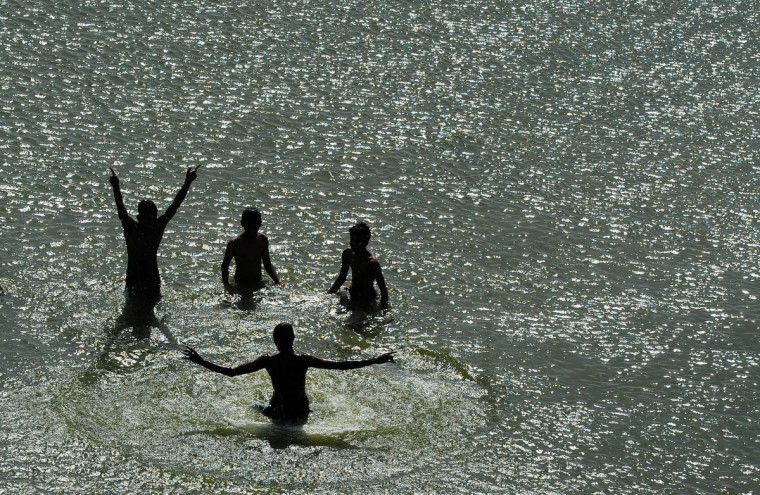 Indian children swim in the River Ganges amid soaring temperatures in Allahabad on May 20, 2015. (Sanjay Kanojia/Getty Images) 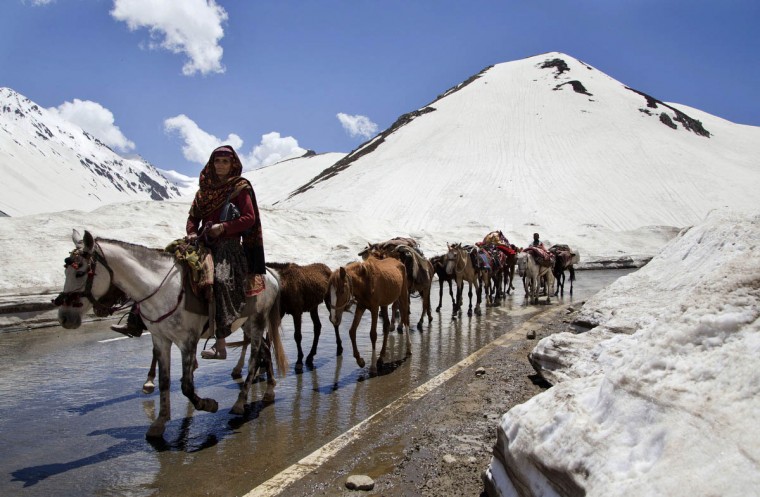 An elderly Kashmiri Bakarwal woman leads a heard of horse near Peer Ki Gali, 80 kilometers (50 miles) south of Srinagar, India, Wednesday, May 20, 2015. Bakarwals are nomadic herders of India’s Jammu-Kashmir state who wander in search of good pastures for their cattle. Every year in April-May more than one hundred thousand people from the nomadic Bakarwal tribes arrive in the meadows of Kashmir and parts of Ladakh from areas of the Jammu region with their flocks of cattle and sheep. After crossing snowy mountains with their cattle and belongings, Kashmir valley’s lush green meadows become their home from April to September, after which they begin their return journey. This seasonal shifting of ìhomesî ensures a regular flow of income for the families. (AP Photo/Dar Yasin) 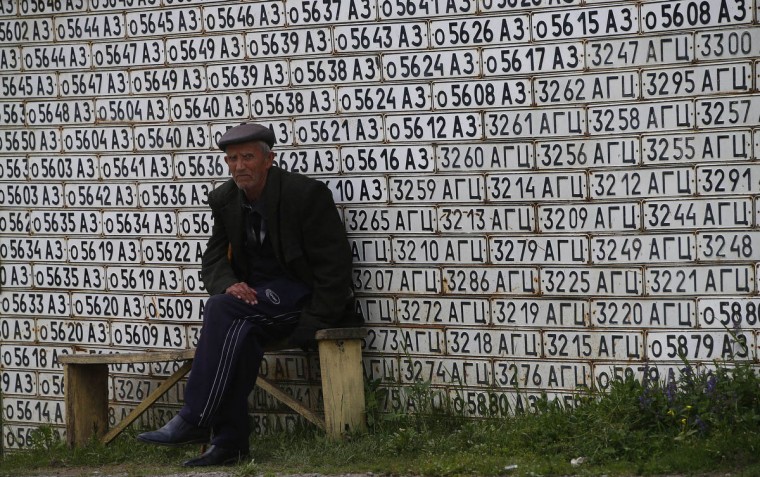 An elderly man sits on a bench near a fence made of old car numbers in Vank village not far from the city of Stepanakert in Armenian-seized Azerbaijani region of Nagorny Karabakh. (Andrey Golovanov/Getty Images) 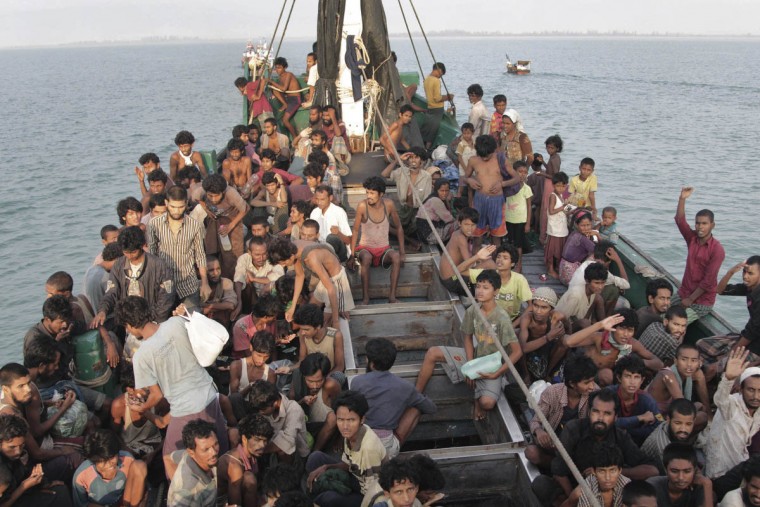 Migrants wait to be be rescued by Acehnese fishermen on their boat on the sea off East Aceh, Indonesia, Wednesday, May 20, 2015. In a potential breakthrough in Southeast Asia’s humanitarian crisis, Indonesia and Malaysia offered Wednesday to provide temporary shelter to thousands of migrants stranded at sea after weeks of saying they weren’t welcome. But they appealed for international help, saying the crisis was a global, not a regional, problem. (AP Photo/S. Yulinnas) 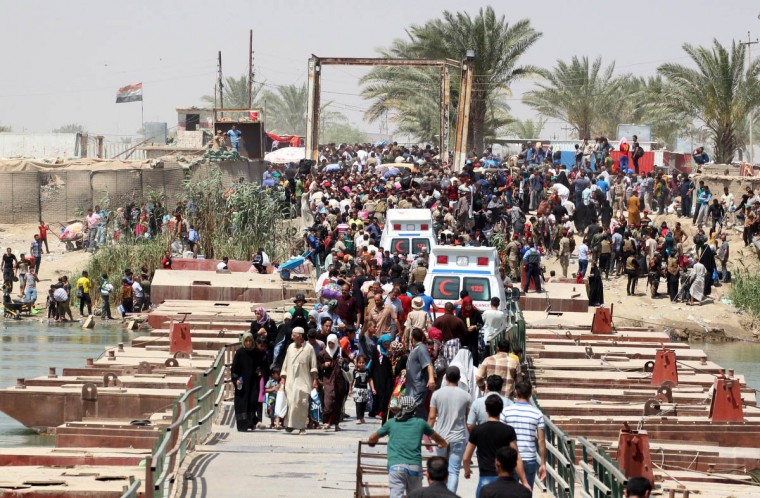 Iraqi residents from the city of Ramadi, who fled their homes as Islamic State (IS) group militants tightened their siege on the last government positions in the capital of Anbar province, wait to cross Bzeibez bridge, on the southwestern frontier of Baghdad, on May 20, 2015. Taking control of Ramadi would constitute the group’s most important victory this year in Iraq, and would give the jihadists control of the capitals of two of its largest provinces. (Sabah Arar/Getty Images) 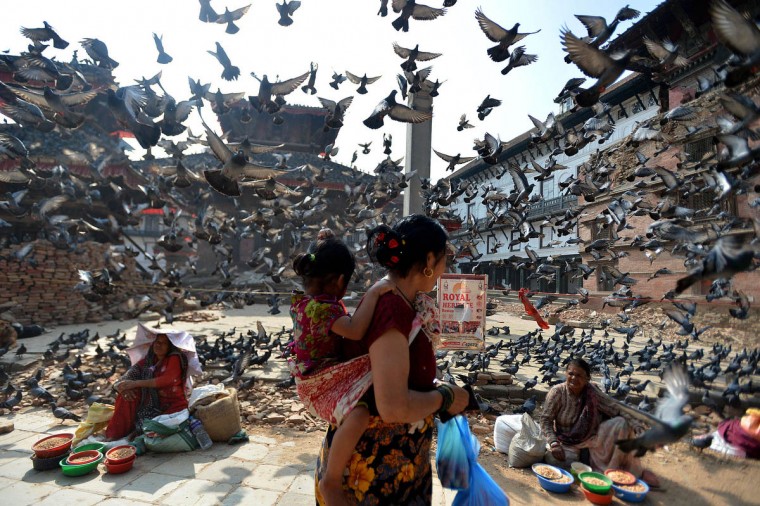 Flying pigeons pass over Nepalese street vendors near the earthquake damaged UNESCO World Heritage Site, Durbar Square in Kathmandu on May 20, 2015. Nearly 8,500 people have now been confirmed dead in the disaster, which destroyed more than half a million homes and left huge numbers of people without shelter with just weeks to go until the monsoon rains. (Ishara S. Kodikara/Getty Images) 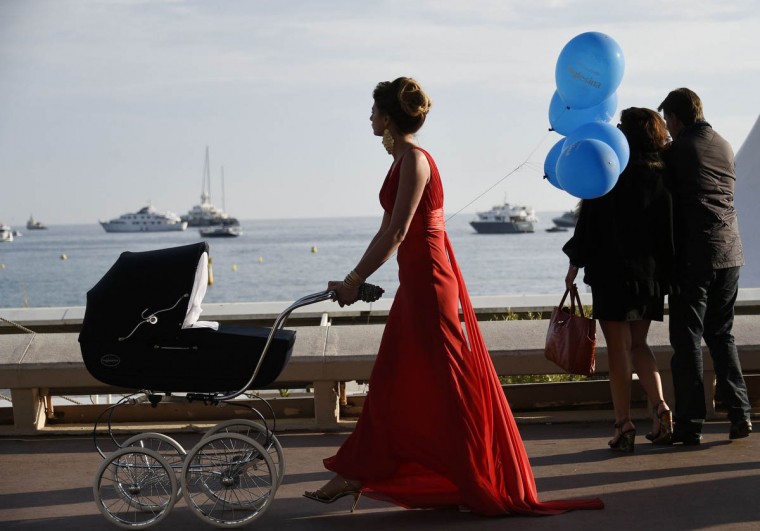 A model takes part in a photoshoot on the Croisette during the 68th Cannes Film Festival in Cannes, southeastern France, on May 19, 2015. (Loic Venance/Getty Images) 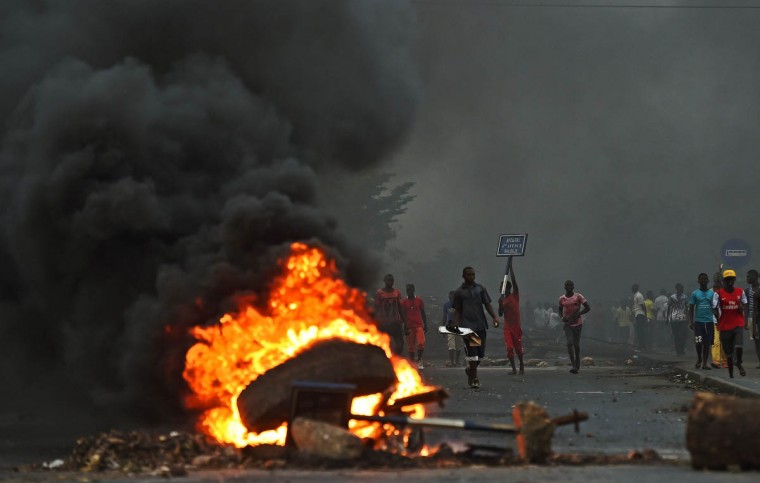 Protesters opposed to the Burundian president Pierre Nkurunziza’s third term in office gather by a burning barricade during a demonstration in the Cibitoke neighborhood of Bujumbura on May 19, 2015. Thousands of demonstrators opposed to Burundian President Pierre Nkurunziza defied warning shots and took to the streets of Bujumbura, as their leaders called for them to overcome their fears and continue the fight. (Carl de Souza/Getty Images) 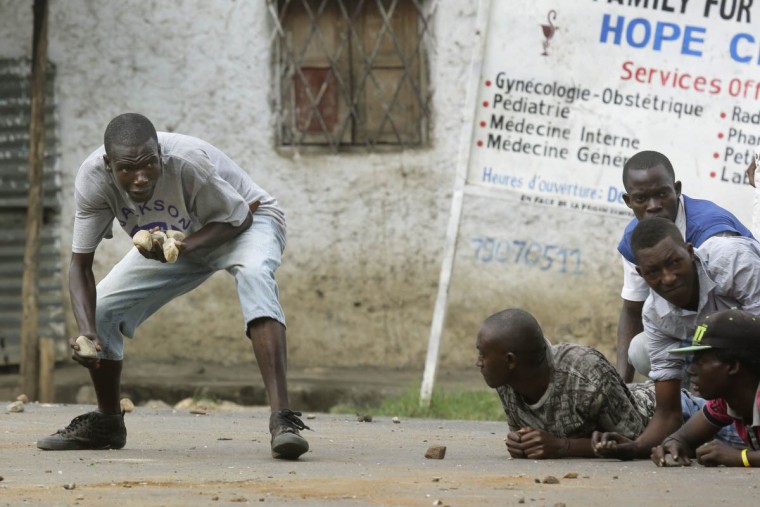 Demonstrators face off with police in the Musaga neighborhood of Bujumbura, Burundi, Wednesday May 20, 2015. Police returned to the neighborhood in full force Wednesday, firing live rounds and tear gas to disperse demonstrators protesting the president’s decision to seek a third term. ( AP Photo/Jerome Delay) 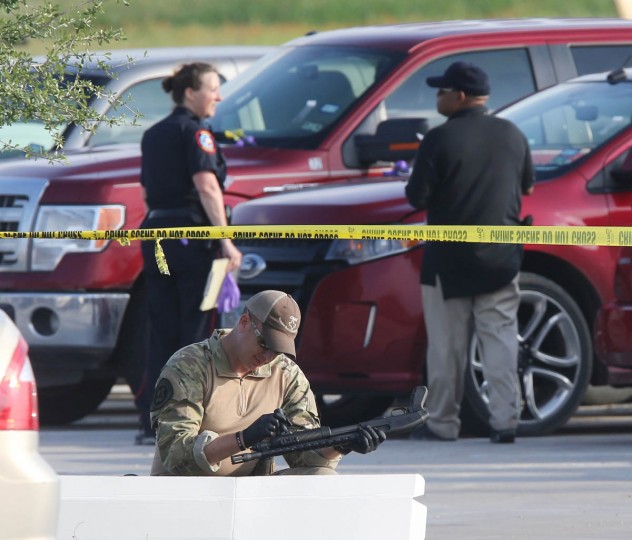 A police officer recovers a shotgun while sweeping through the parking lot of a Twin Peaks restaurant Tuesday, May, 19, 2015, in Waco, Texas. A deadly weekend shootout involving rival motorcycle gangs at the restaurant apparently began with a parking dispute and someone running over a gang member’s foot, police said Tuesday. (Jerry Larson/Waco Tribune-Herald via AP)