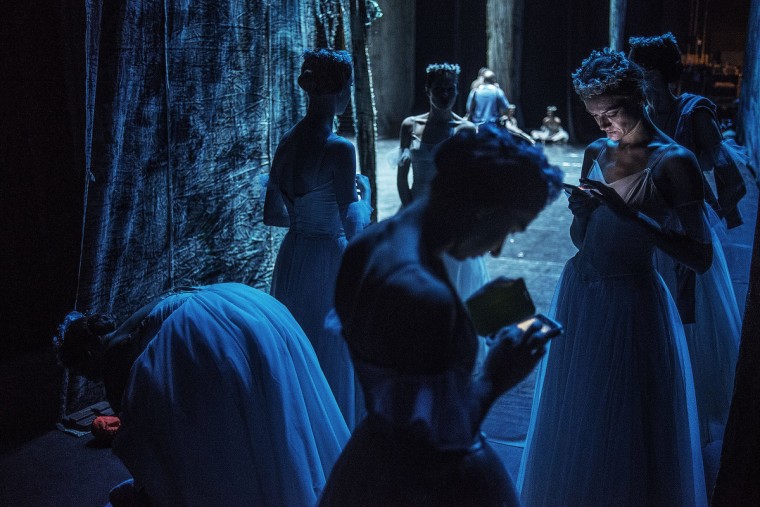 Ballerinas take a break during a “Giselle” dress rehearsal before the first official show on May 6, 2015 in Johannesburg, as the St. Petersburg Ballet Theater kicks off the South African leg of the global season. (Mujahid Safodien/Getty Images) 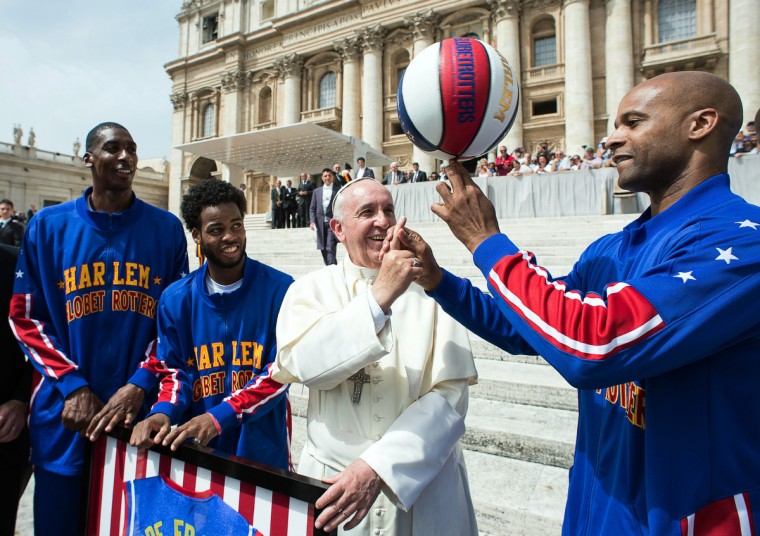 Harlem Globetrotters’ Hi-Lite Bruton, second from left, Ant Atitkson, third from left, look at teammate Flight Time Lang, right, helping Pope Francis spin the ball on his finger as they meet during the general audience in St. Peter’s Square at the Vatican, Wednesday, May 6, 2015. (L’Osservatore Romano/Pool Photo via AP) 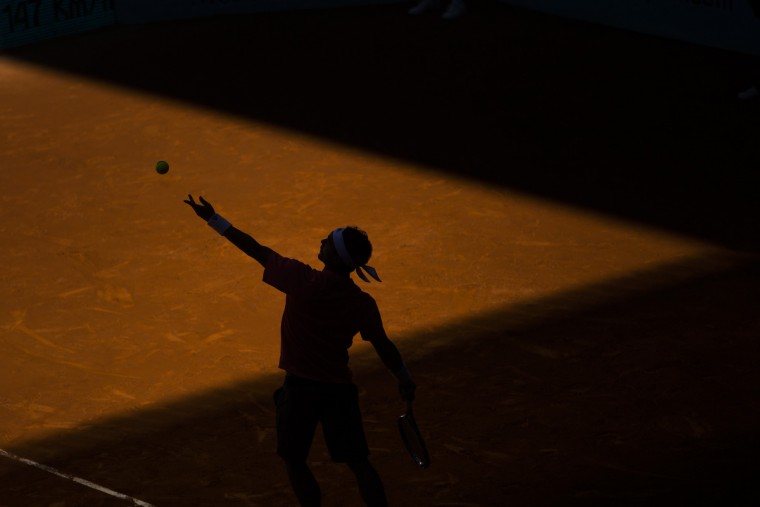 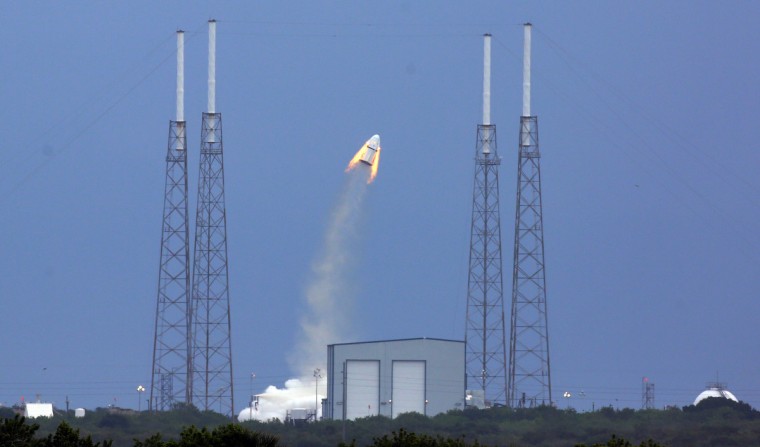 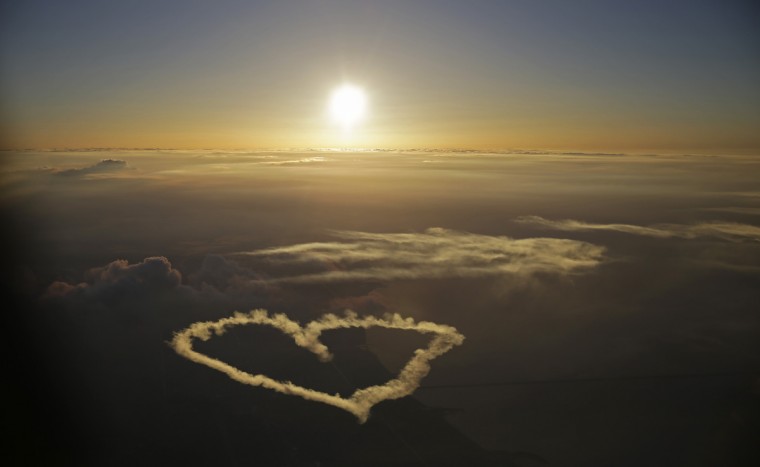 A giant heart hangs in the sky at sunset after skywriter Nathan Hammond wrote several days-worth of messages, relating to hope and love, over New Orleans, during the New Orleans Jazz & Heritage Festival. (AP Photo/Gerald Herbert) 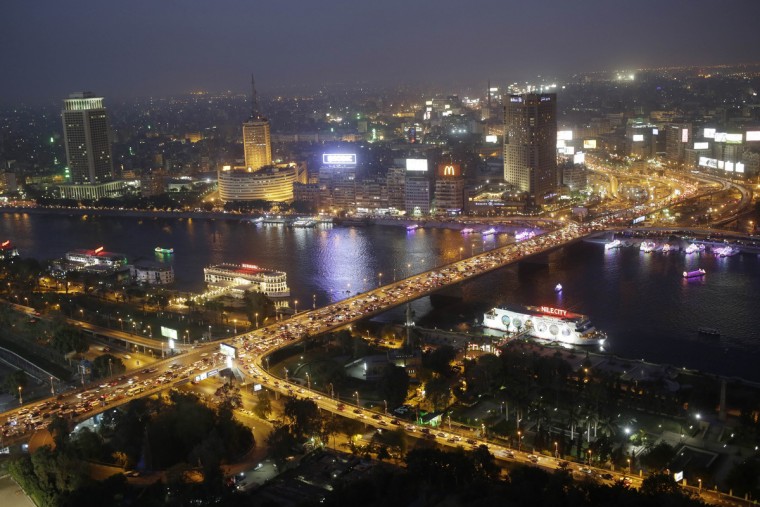 Rush hour traffic fills the October bridge over the Nile River in Cairo, Egypt. In a country where the population is around 90 million, bumper-to-bumper traffic has increased mostly in the country’s capital. (AP Photo/Hassan Ammar) 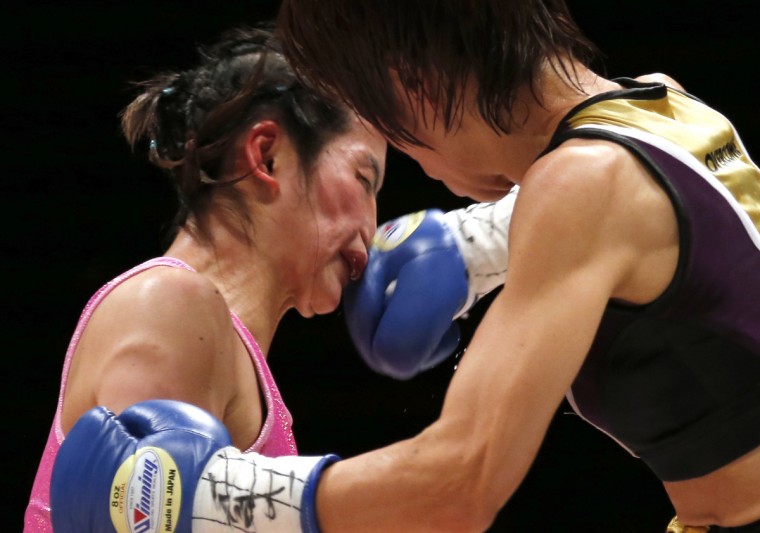 Japanese challenger Kayoko Ebata, right, lands a right on the face of her compatriot champion Kumiko Seeser Ikehara in the sixth round of their WBO female minimumweight boxing title match in Tokyo Wednesday, May 6, 2015. Ikehara defended her title by 2-1 decision. (AP Photo/Toru Takahashi) 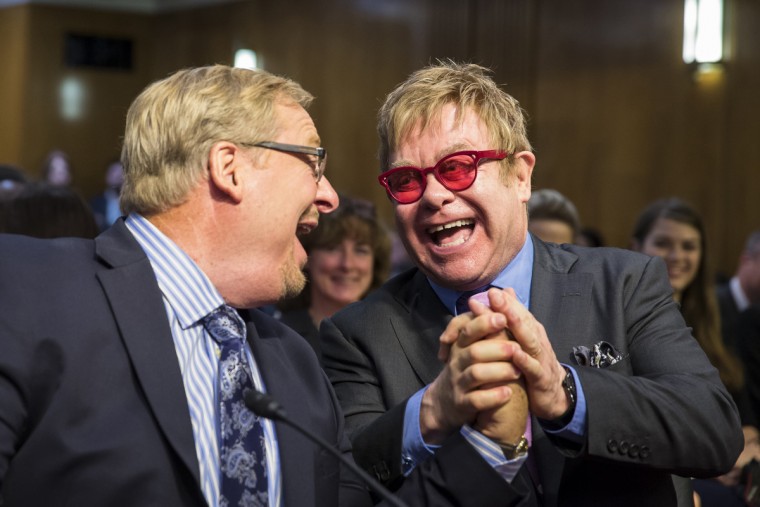 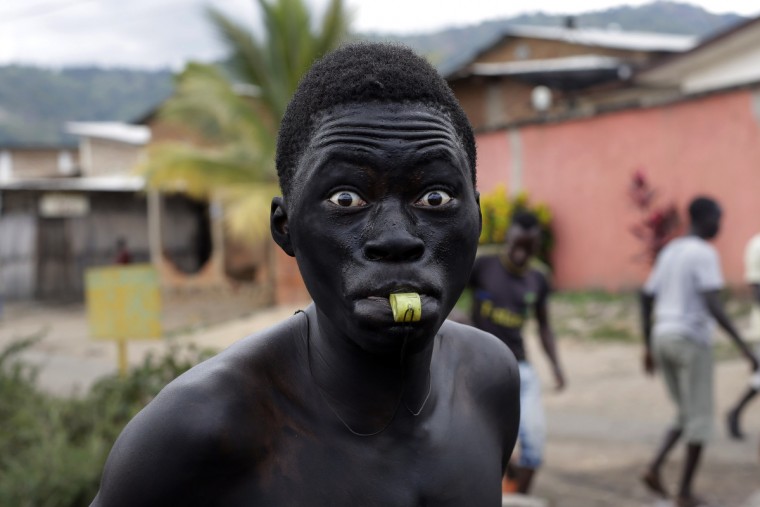 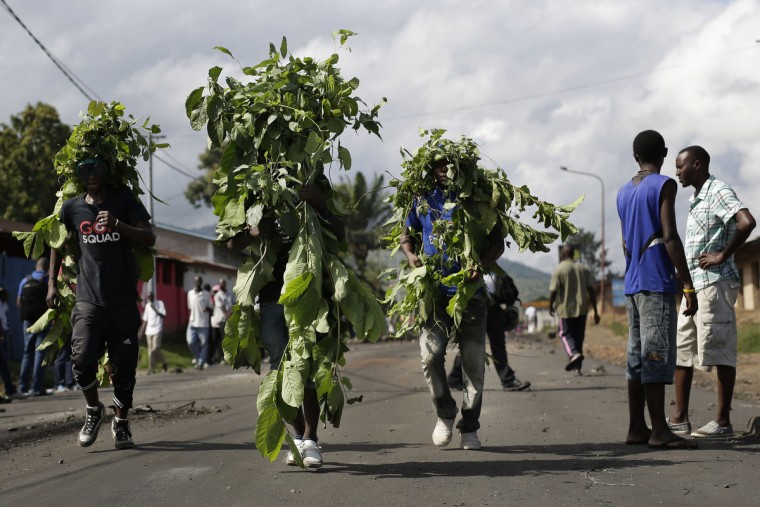 Demonstrators seem to be dressed as trees as they walk to a barricade in the Musaga district of Bujumbura, Burundi, Wednesday May 6, 2015. On Tuesday some protesters made hats out of branches, which seems to have progressed on Wednesday to this more elaborate millinery style adopted by some protesters, without any explanation for the fashion. Anti-government demonstrations continue Wednesday and protesters regularly set road blocks in Burundi’s capital after the constitutional court validated President Pierre Nkurunziza’s decision to seek a third term in office. (AP Photo/Jerome Delay) 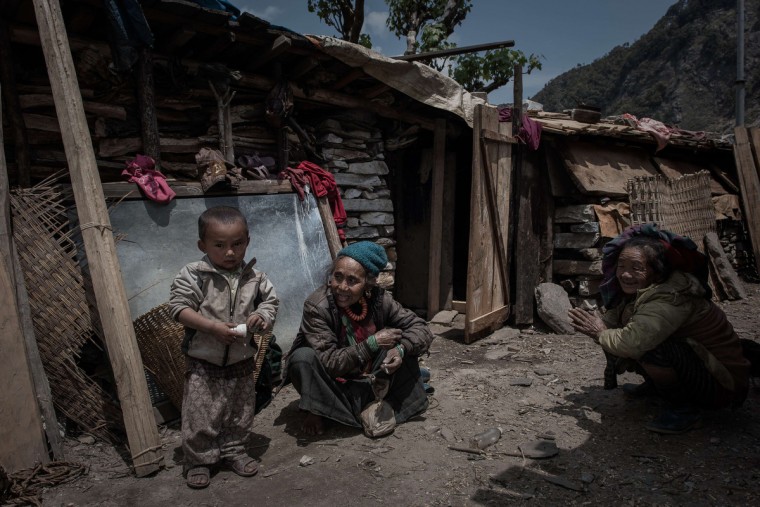 Nepalese earthquake survivors look after a child in the remote Kerauja village in Gorkha district on May 6, 2015. The earthquake that struck Nepal on April 25, 2015, killed more 7,600 people and injured another 16, 390 across the country, according to the Nepal Emergency Operation Centre. (Philippe Lopez/Getty Images) 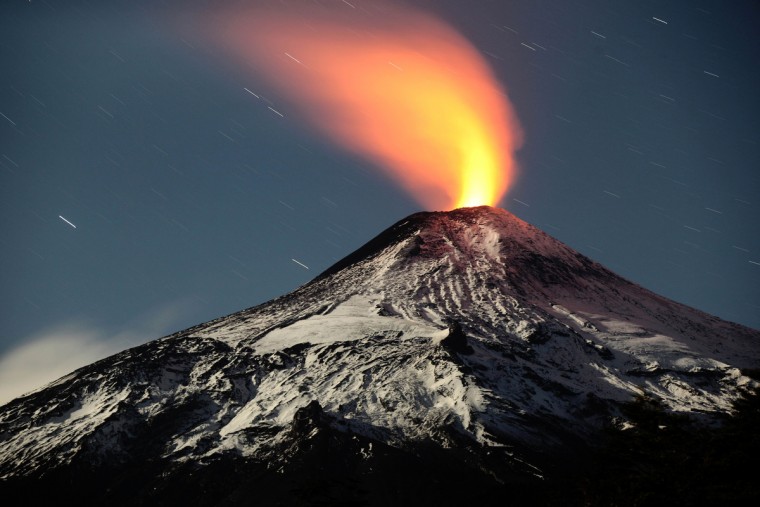 View of the Villarrica volcano, one of Chile’s most active, taken from Pucon, some 800 km south of Santiago, showing visible signs of activity on May 6, 2015. (Sebastian Escabar/Getty Images) 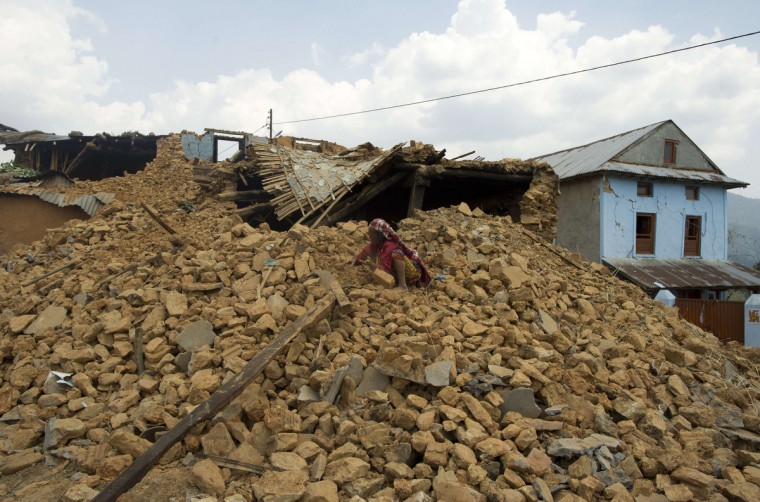 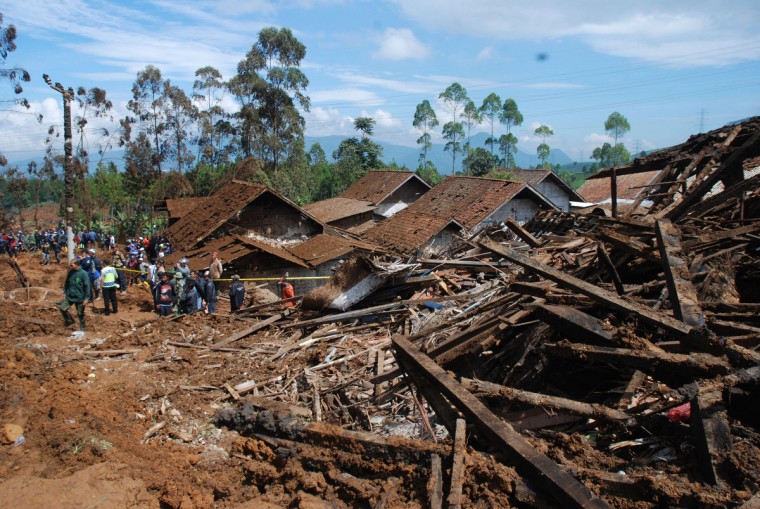 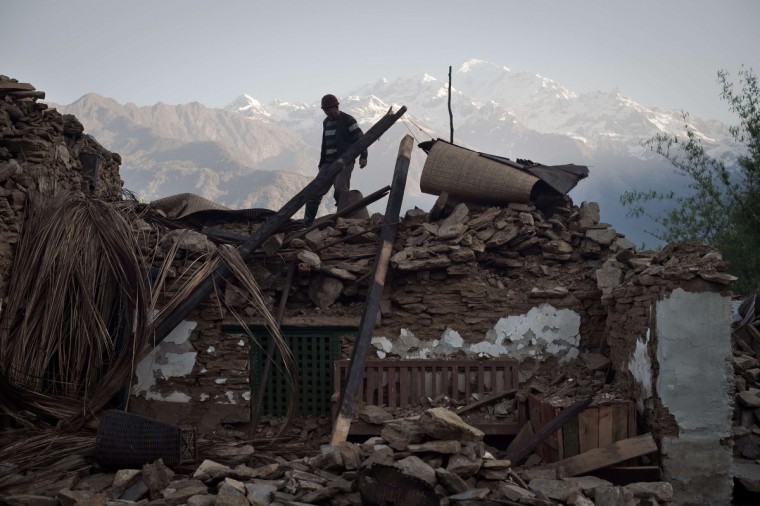 A villager walks on the roof of his destroyed house in Barpak village in north central Nepal, nine days after a 7.8 magnitude earthquake struck the Himalayan nation on April 25. The earthquake has had a devastating impact on the economy of Nepal where tourism attracted almost 800,000 foreign visitors in 2013 — many of them climbers heading straight to Mount Everest but also less adventurous tourists seeking the rich cultural history of Kathmandu. (Nicolas Asfouri/Getty Images) 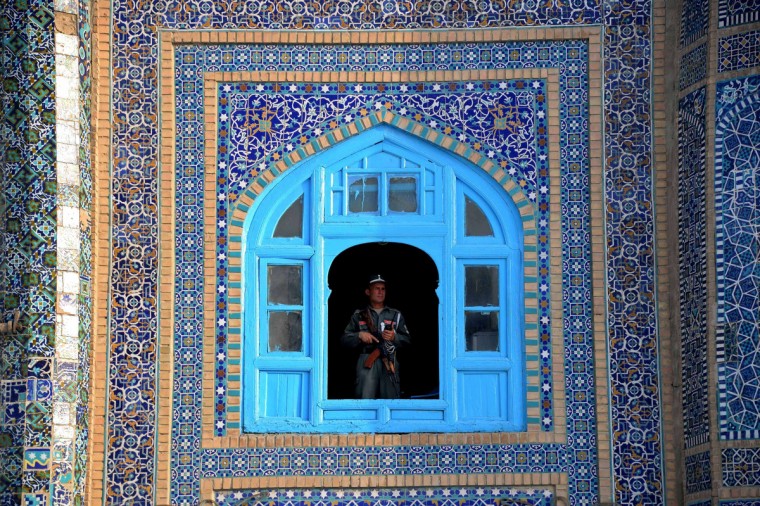 An Afghan policeman stands in a window of the Hazrat-e-Ali shrine, or Blue Mosque, in Mazar-i-Sharif on May 5, 2015. (Farshad Usyan/Getty Images) 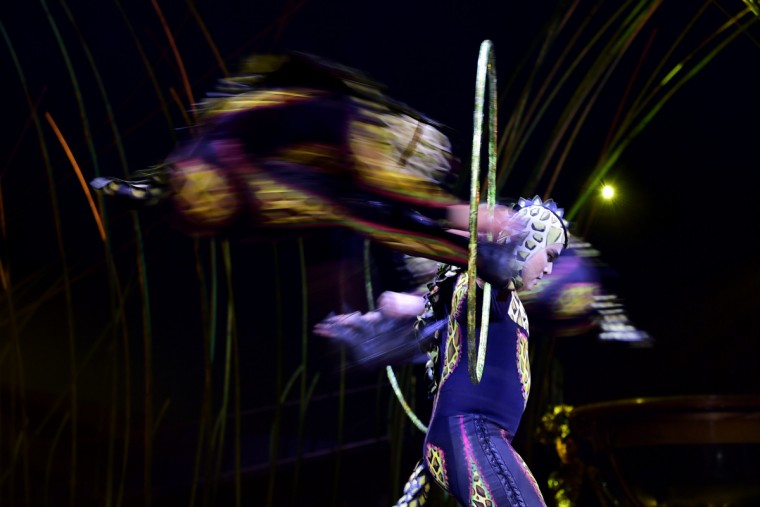 Members of the Cirque du Soleil perform during the European debut of their latest show “Amaluna” in Madrid on May 5, 2015. (Javier Soriano/Getty Images) 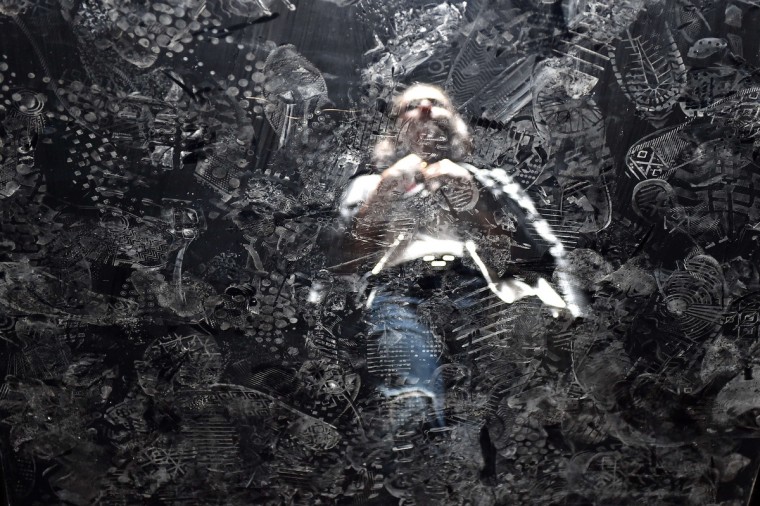 A visitor walks on glass ceiling at the pavilion of Russia during the 56th International Art Exhibition (Biennale d’Arte) titled “All the Worlds Futures” on May 5, 2015 in Venice. (Gabriel Bouys/Getty Images) 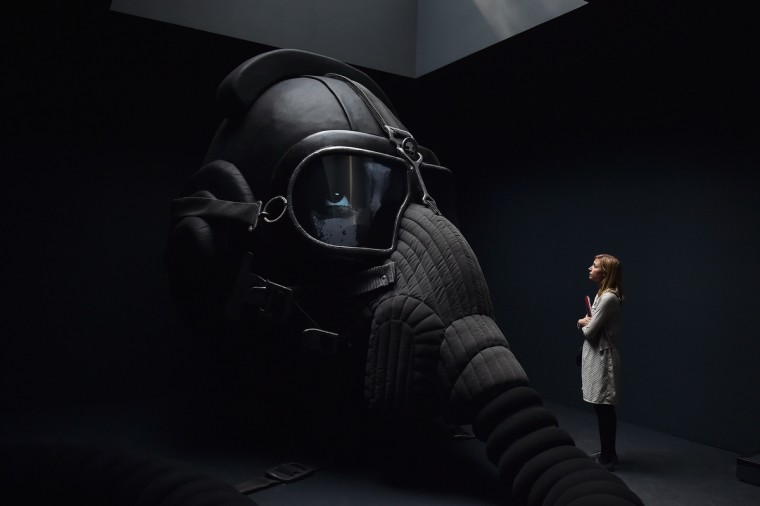 A visitor looks at a creation by Russian artist Irina Nakhova presented at the Russia’s pavilion during the 56th International Art Exhibition (Biennale d’Arte) titled “All the Worlds Futures” on May 5, 2015 in Venice. (Gabriel Bouys/Getty Images)