Flooding in Louisville, an agreement in Lausanne, celebrations in Tehran | April 3 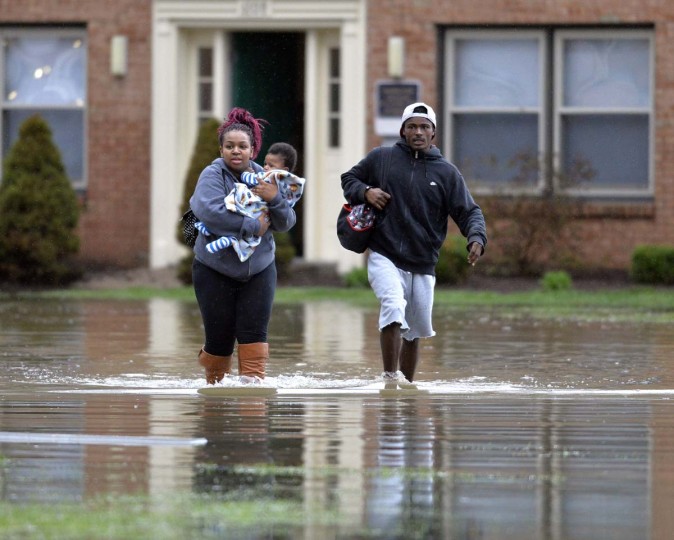 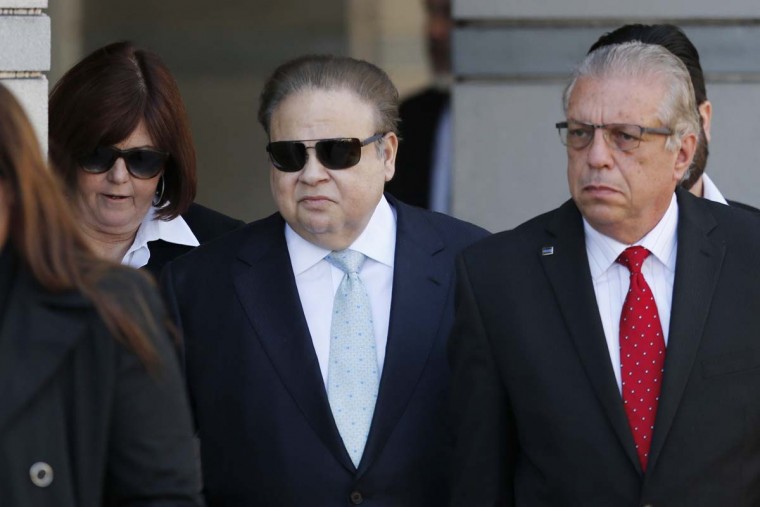 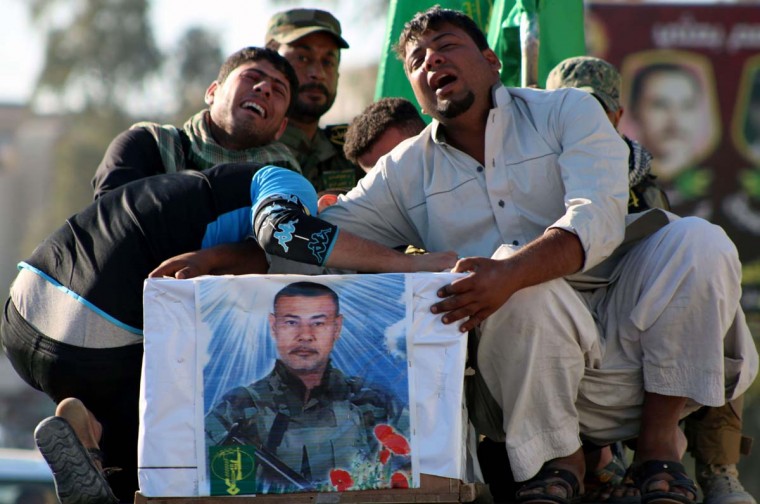 Iraqi men mourn over the coffin of a member of the Shiite Badr Brigade, who died in Tikrit in fighting alongside government forces against Islamic State (IS) group jihadists, during his funeral on April 3, 2015 in the southern city of Basra. Iraqi forces have retaken Tikrit from the Islamic State (IS) group after a month-long operation, but the task of returning some semblance of normal life to the city will take far longer. || CREDIT: HAIDAR MOHAMMED ALI – AFP/GETTY IMAGES 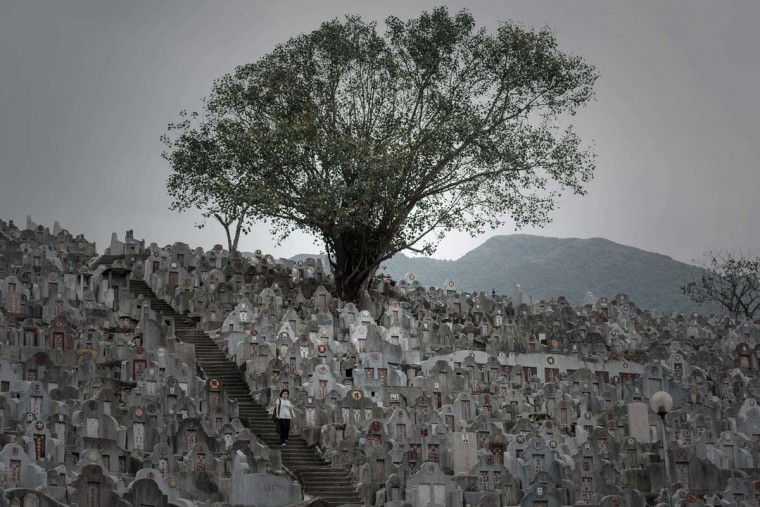 A woman walks down a stairway between tombstones in a cemetery ahead of the Ching Ming festival in Hong Kong on April 3, 2015. Hong Kong families trekked up to hillside cemeteries on April 3 to burn offerings for their ancestors, with French macaroons proving this year’s must-have delicacy for relatives to enjoy in the afterlife. || CREDIT: PHILIPPE LOPEZ – AFP/GETTY IMAGES 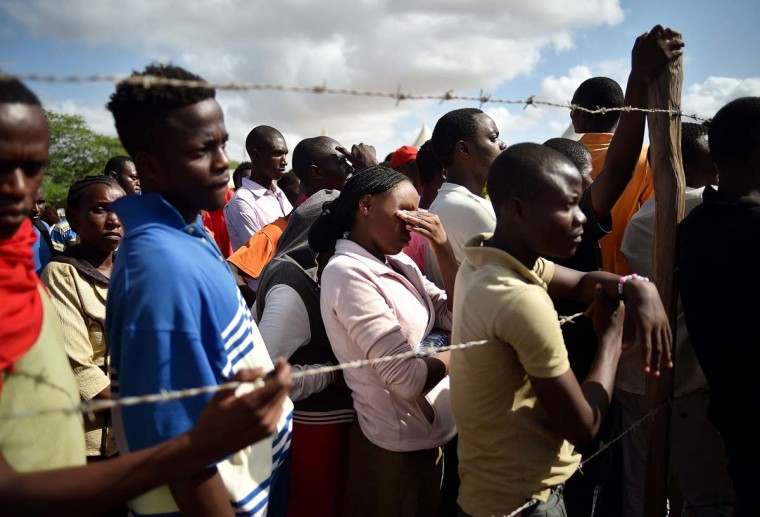 Students evacuated from Moi University listen to an address by Interior Minister for Security Joseph Ole Nkaissery before they are transported to their home regions from a holding area on April 3, 2015. Kenya’s interior minister vowed that the country would not bow to terrorist threats, a day after the massacre of 147 students by Somalia’s Al-Qaeda-linked Shebab fighters. || CREDIT: CARL DE SOUZA – AFP/GETTY IMAGES 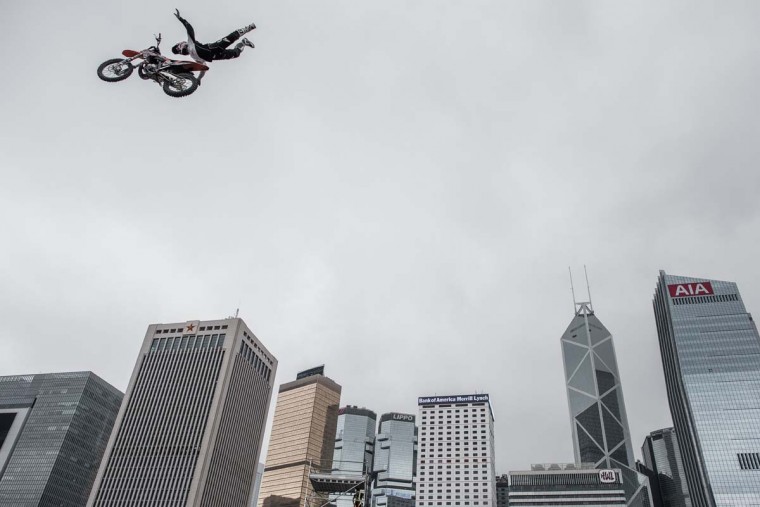 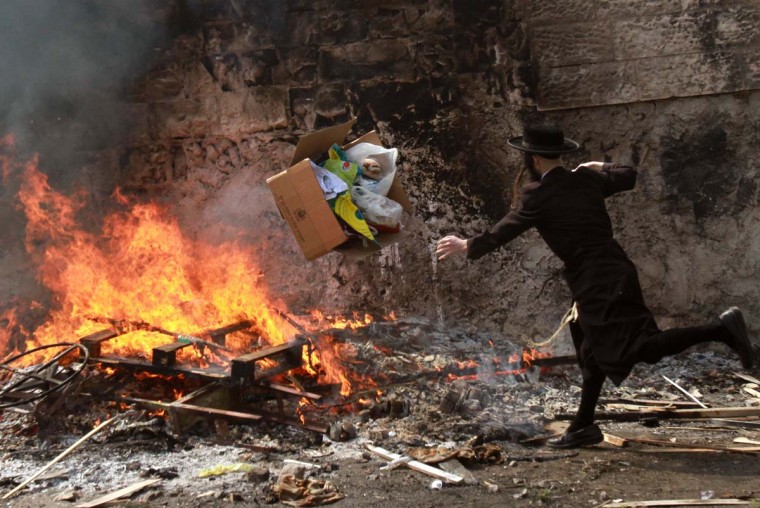 An Ultra-Orthodox Jew throws leavened items onto a fire in Jerusalem during the final preparations before the start of the Jewish Passover holiday, which begins at sunset, on April 3, 2015. Due to the haste with which the Jews left Egypt some 3,500 years ago, the bread they had prepared for the journey did not have time to rise, therefore to commemorate their ancestors’ plight, religious Jews do not eat leavened food products throughout the eight-day Pesach holiday (Passover). || CREDIT: GIL COHEN-MAGEN – AFP/GETTY IMAGES 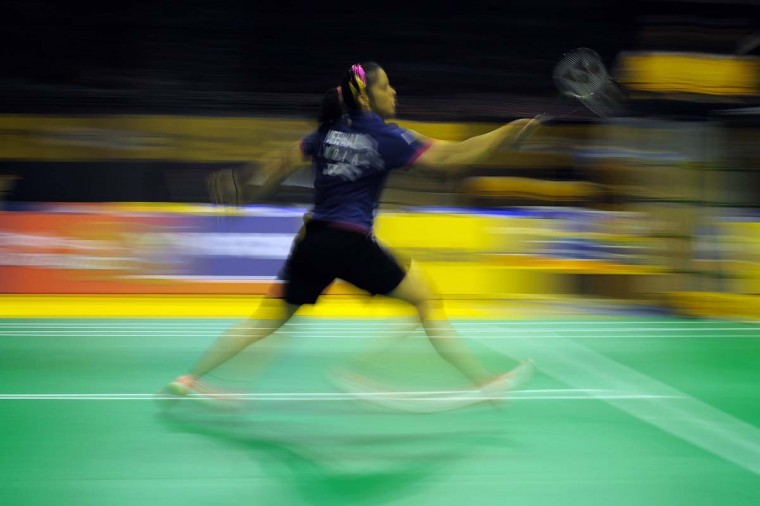 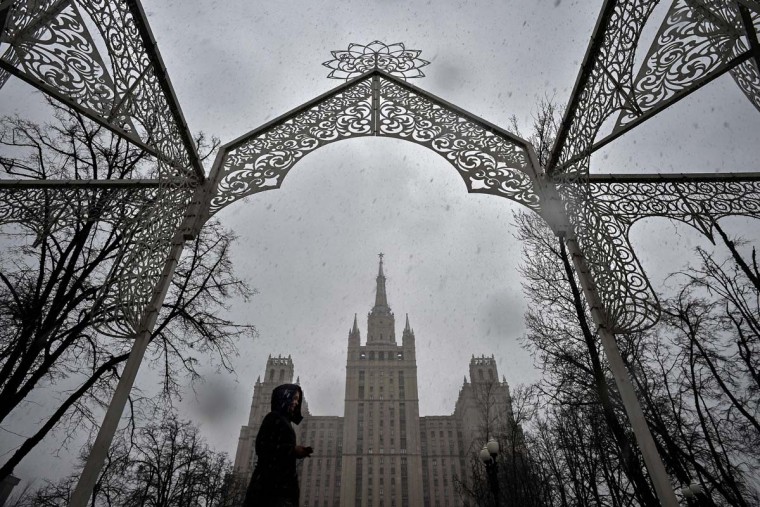 A woman walks along a street under a snowfall in central Moscow on April 3, 2015 with a Stalin-era skyscraper seen in the background. || CREDIT: KIRILL KUDRYAVTSEV – AFP/GETTY IMAGES 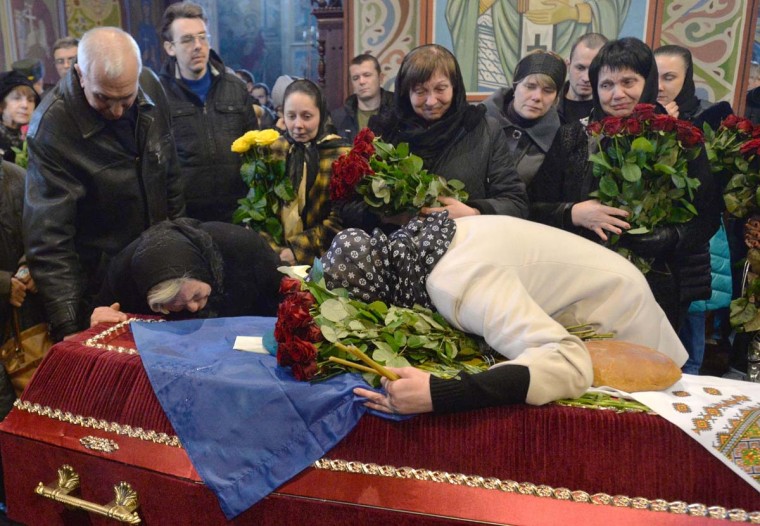 Grieving friends and relatives pay their last respects to Ukrainian paratrooper Igor Branovitsky, 38, killed during fighing in the conflict in east Ukraine at a funeral ceremony in Mikhaylovsky Cathedral in Kiev on April 3, 2015. || CREDIT: GENYA SAVILOV – AFP/GETTY IMAGES 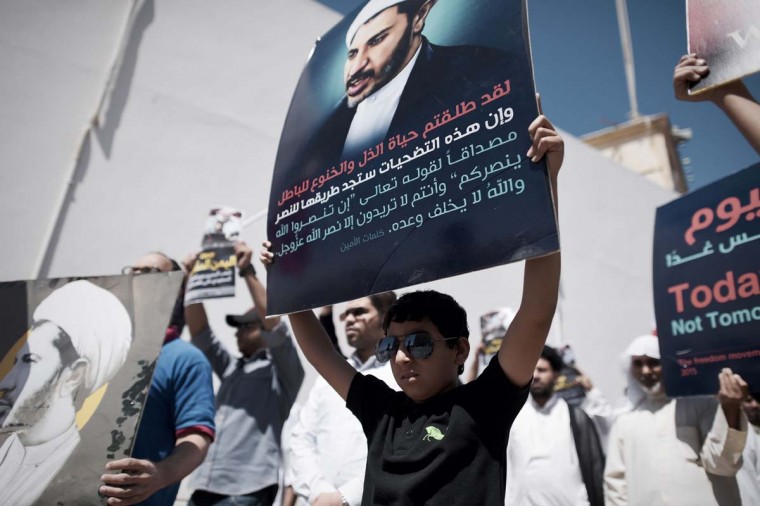 A young Bahraini protester holds a placard portraying Sheikh Ali Salman, head of the Shiite opposition movement Al-Wefaq, on April 3, 2015, during a demonstration against his arrest, in the village of Diraz, west of Manama. || CREDIT: MOHAMMED AL-SHAIKH – AFP/GETTY IMAGES 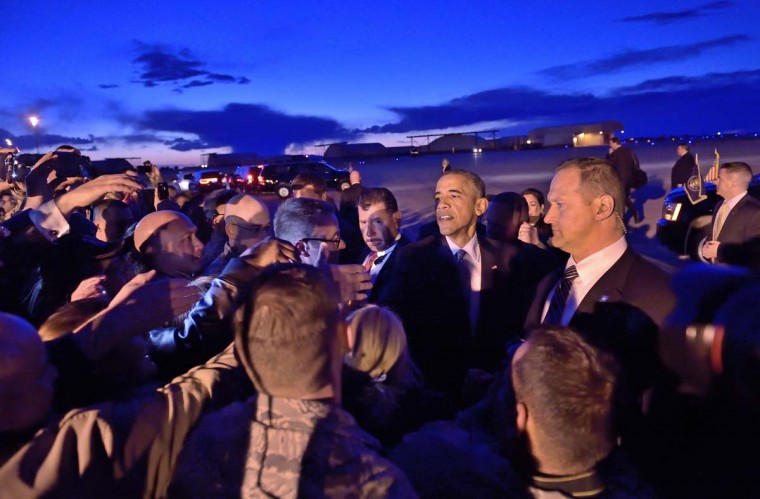 US President Barack Obama greets base personnel and well-wishers upon arrival at Hill Air Force Base on April 2, 2015 in Utah. || CREDIT: MANDEL NGAN – AFP/GETTY IMAGES 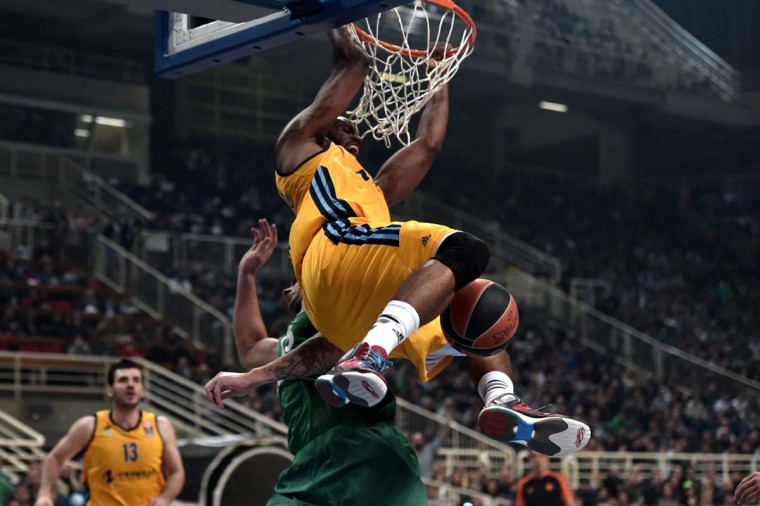 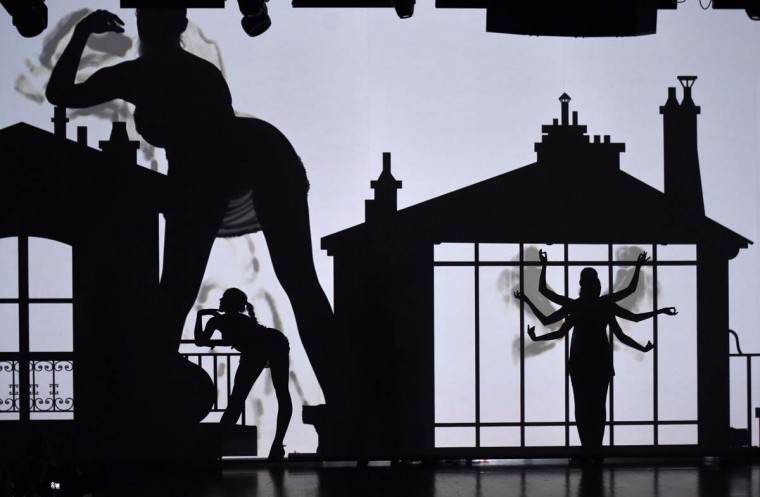 Dancers perform during a general rehearsal of “Paris Merveilles”, the new revue of the Parisian cabaret the Lido directed by Italian-Belgian theatre director Franco Dragone, at the Lido in Paris, on April 2, 2015. || CREDIT: LOIC VENANCE – AFP/GETTY IMAGES 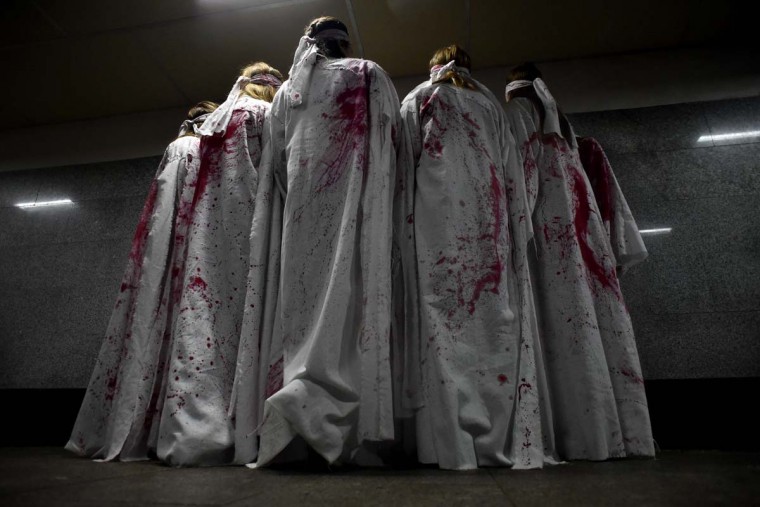 Activists of the Anti-Maidan movement wearing white costumes with splashes of red paint symbolizing bloody spots prepare to take part in a protest rally against NATO activities in front of the US embassy in Moscow on April 3, 2015. || CREDIT: KIRILL KUDRYAVTSEV – AFP/GETTY IMAGES 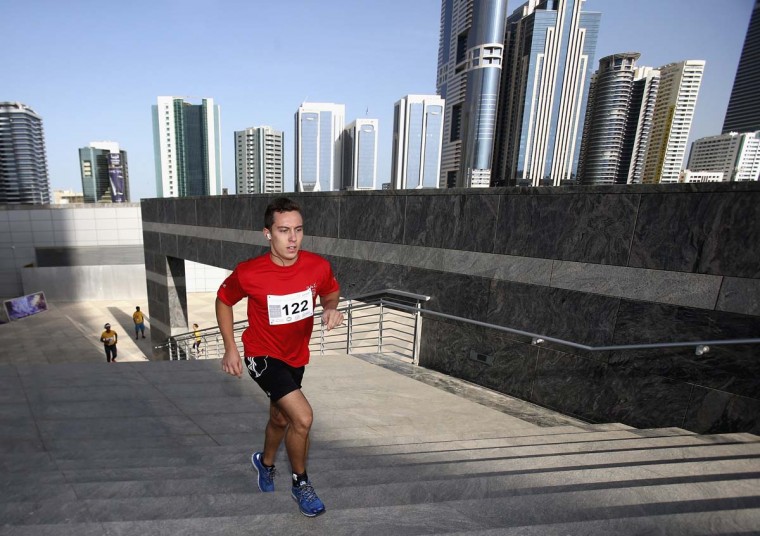 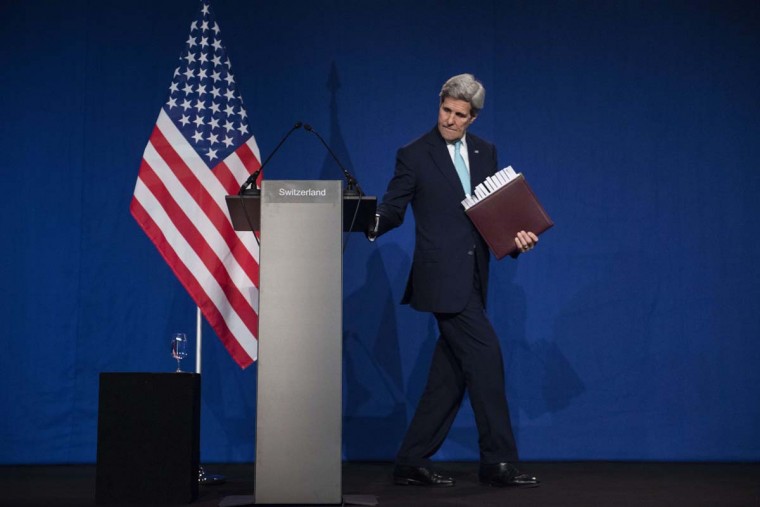 Secretary of State John Kerry leaves after speaking to the press at the Ecole Polytechnique Federale De Lausanne at the end of the Iran nuclear program talks, on April 2, 2015 in Lausanne. An outline agreement on the future shape of Iran’s nuclear program has been reached after marathon talks with six major powers in Switzerland. AFP PHOTO/POOL/BRENDAN SMIALOWSKIBRENDAN SMIALOWSKI/AFP/Getty Images ORG XMIT: 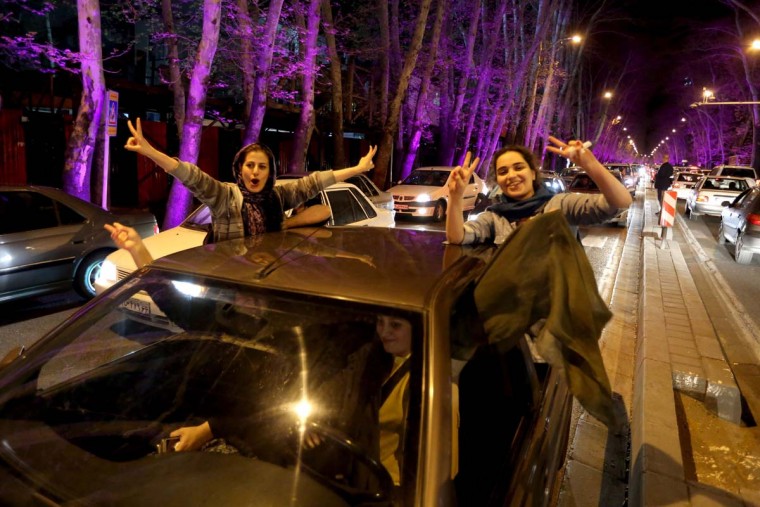 Women sitting in a car flash the “V for Victory” sign as they celebrate on Valiasr street in northern Tehran on April 2, 2015, after the announcement of an agreement on Iran nuclear talks. Iran and global powers sealed a deal on April 2 on plans to curb Tehran’s chances for getting a nuclear bomb, laying the ground for a new relationship between the Islamic republic and the West. || CREDIT: ATTA KENARE – AFP/GETTY IMAGES 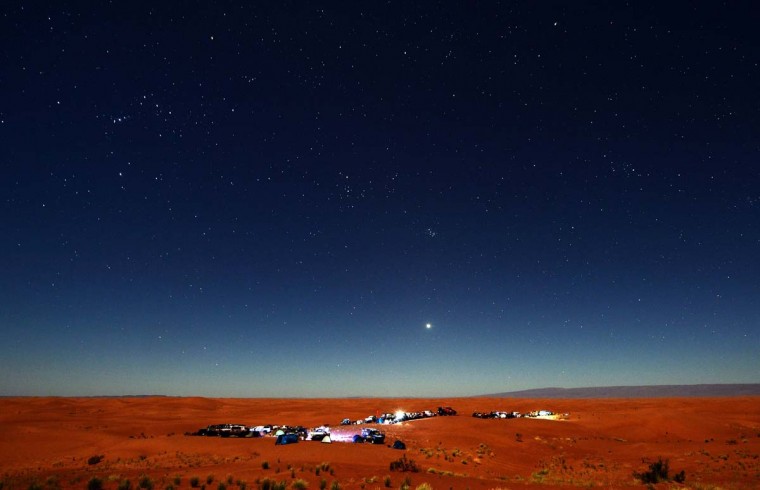 A general view taken at night shows a checkpoint during the 25th edition of the “Rallye Aicha des Gazelles” on March 31, 2015 between Foum Zguid and Mhamid El Ghizlane in Morocco’s western Sahara desert. Participants in the women’s only race can navigate their own route and the winner is the team that covers the shortest distance to pass the checkpoints. || CREDIT: FADEL SENNA – AFP/GETTY IMAGES 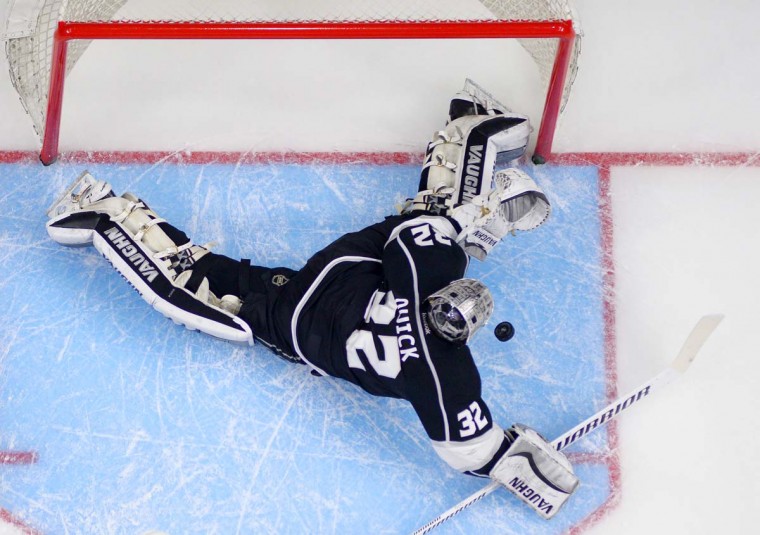 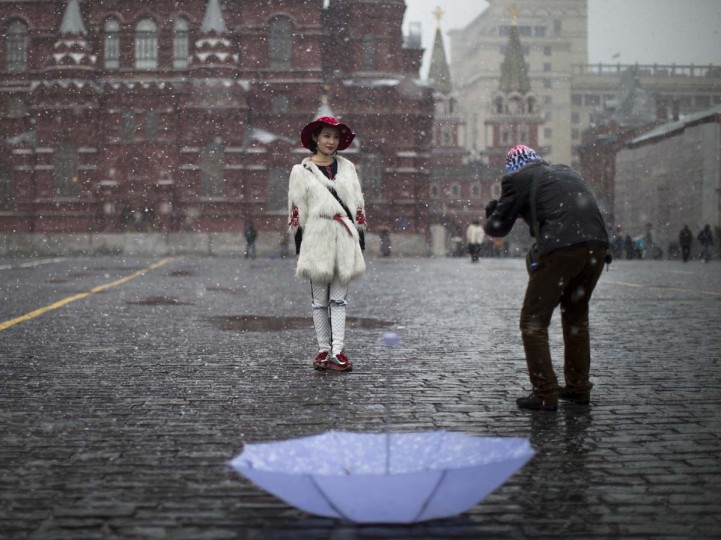