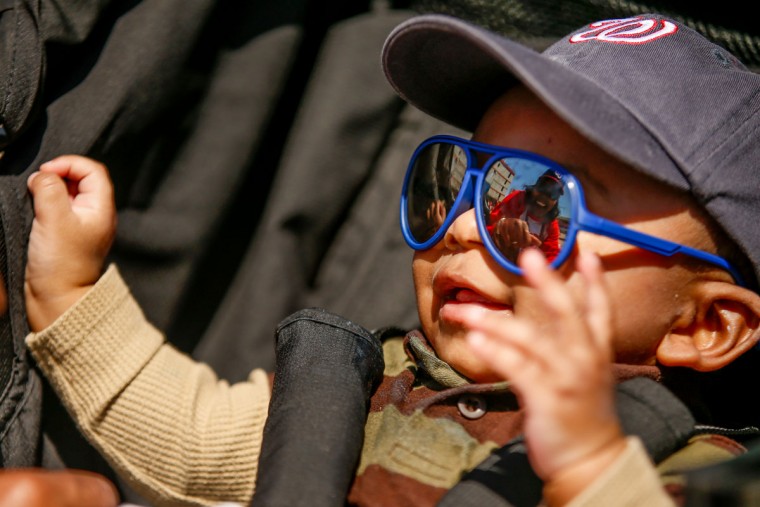 Cole Reaves of Alexandria, Va., smiles as he arrives before a baseball game between the Washington Nationals and the New York Mets on opening day at Nationals Park, Monday, April 6, 2015, in Washington. (AP Photo/Andrew Harnik) 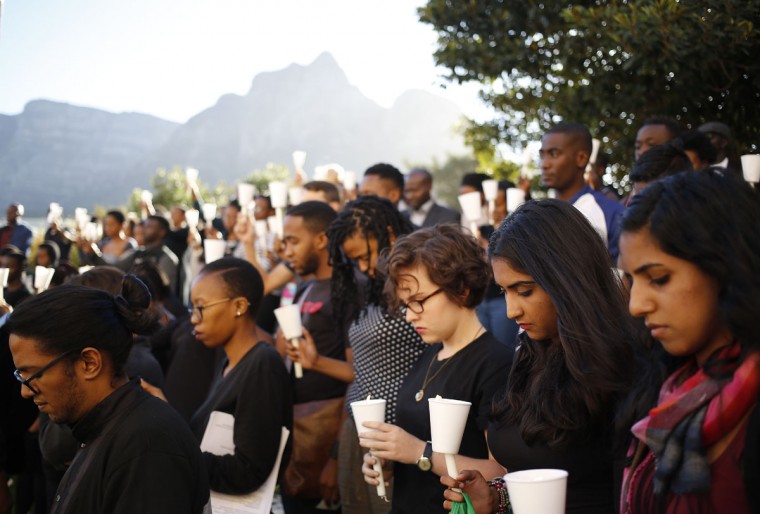 Students attends a vigil for people killed in an attack on a college by Islamic militants in Garissa, Kenya, at the University of Cape Town, in Cape Town, South Africa, Monday, April 6, 2015. Kenya launched airstrikes against Islamic militants in Somalia following an extremist attack on a Kenyan college that killed 148 people, a military spokesman said Monday. (AP Photo/Schalk van Zuydam) 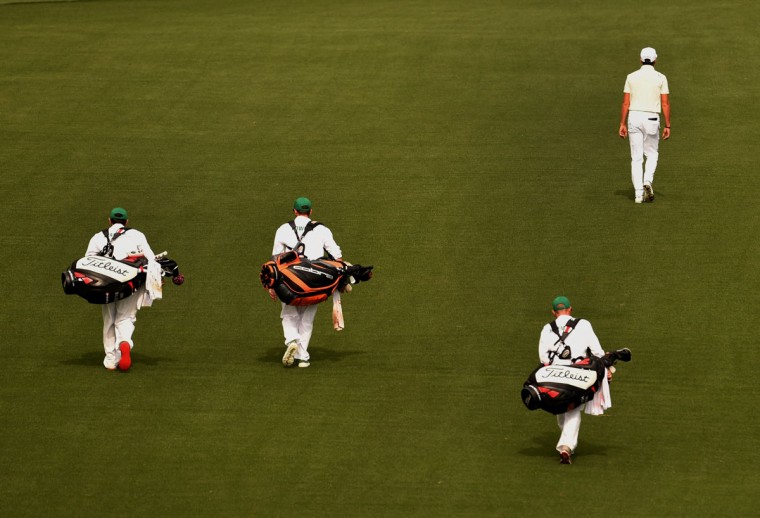 Rickie Fowler (Upper-R) of the US during a practice round April 6, 2015 at Augusta National Golf Club in Augusta, Georgia in preparation for the 2015 Masters Golf Tournament. (AFP Photo/ Timothy A. Clary) 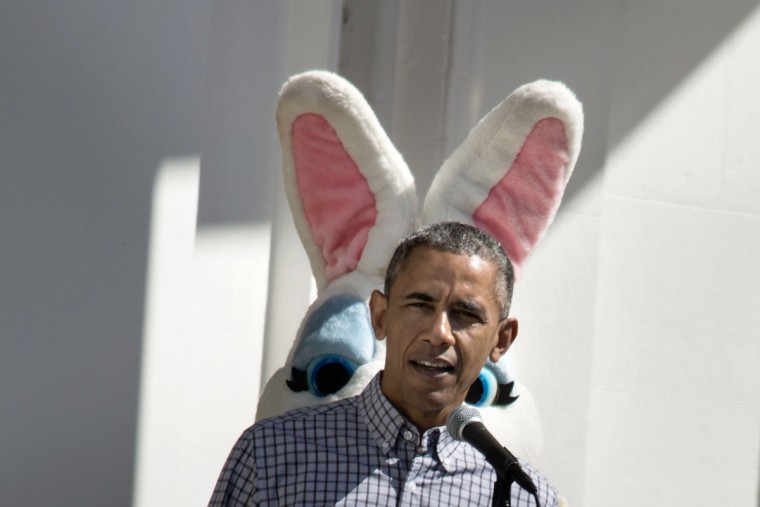 US President Barack Obama speaks during an Easter Egg Roll on the South Lawn of the White House April 6, 2015 in Washington, DC. (AFP Photo/P /brendan ) 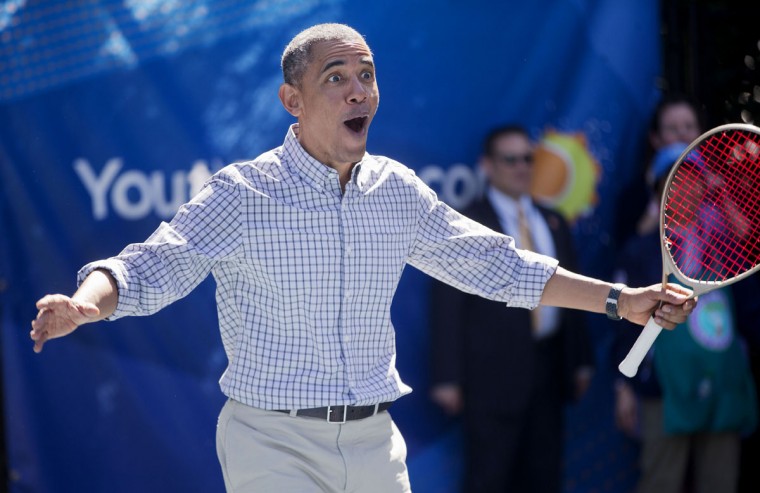 President Barack Obama reacts to scoring on Caroline Wozniacki a Danish professional tennis player as he plays tennis during the White House Easter Egg Roll on the tennis court on the South Lawn of the White House in Washington,Monday, April 6, 2015. Thousands of children gathered at the White House for the annual Easter Egg Roll. This year’s event features live music, cooking stations, storytelling, and of course, some Easter egg roll. (AP Photo/Pablo Martinez Monsivais) 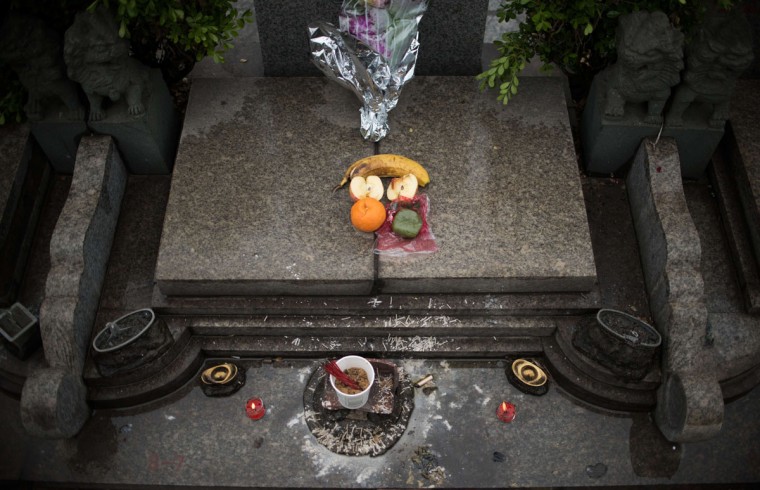 Offerings lie on a grave during the annual “Qingming” festival, or Tomb Sweeping Day, at a public cemetery in Shanghai on April 6, 2015. During “Qingming” Chinese traditionally tend the graves of their departed loved ones and often burn paper money, model houses, cars, mobile phones and other goods as offerings to honour them and keep them comfortable in the afterlife. (AFP Photo/Johannes Eisele) 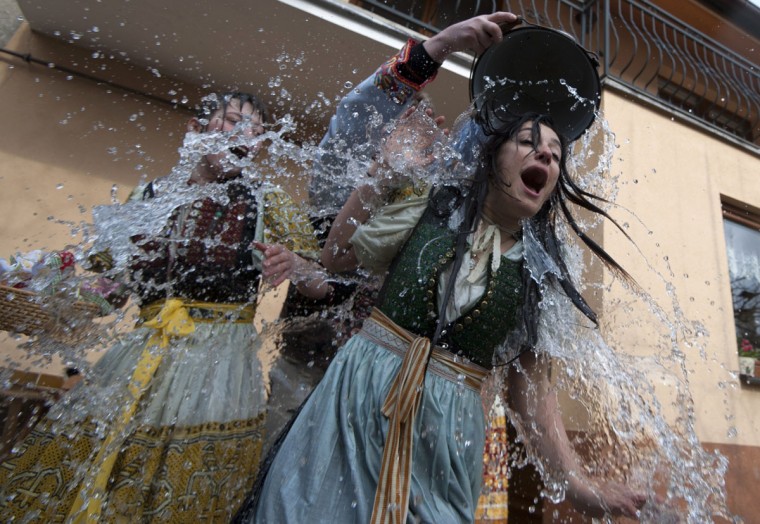 A young Slovak dressed in traditional costume (C) throws a bucket of water over a girl as part of Easter celebration in the village of Trencianska Tepla, north-western Slovakia, on April 6, 2015. Slovakia’s men splash women with water and hit them with a willow to symbolize youth, strength and beauty for the upcoming spring season. (AFP Photo/Samuel Kubani) 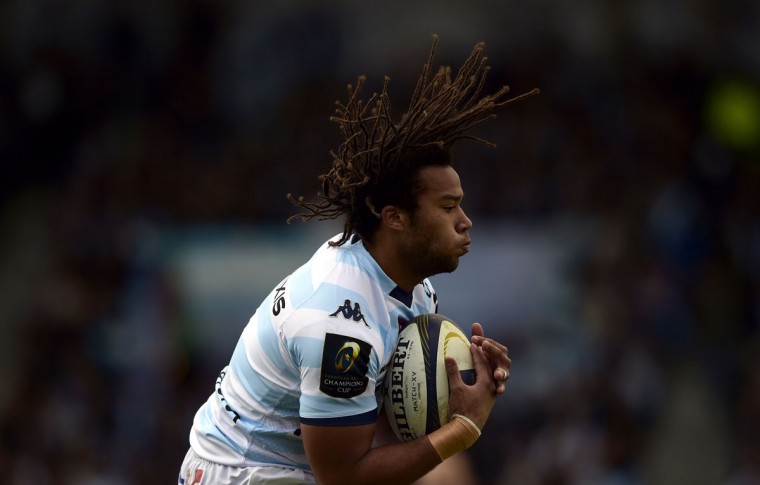 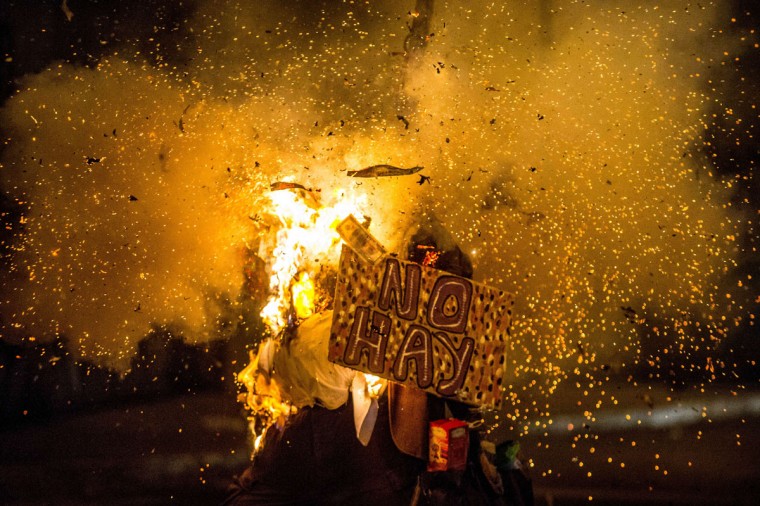 A dummy of Venezuelan President Nicolas Maduro reading “There are no” next to a fake 100 dollar bill, is burnt as the “Burning of Judas”, during an Easter celebration, at El Valle shantytown in Caracas on April 5, 2015. Dolls of US President Barack Obama and his Venezuelan counterpart Nicolas Maduro were burnt in Caracas on Easter Sunday during the traditional “Burning of Judas”, which had as its backdrop the climate of political tension between Venezuela and the United States. (AFP Photo/Federico Parra) 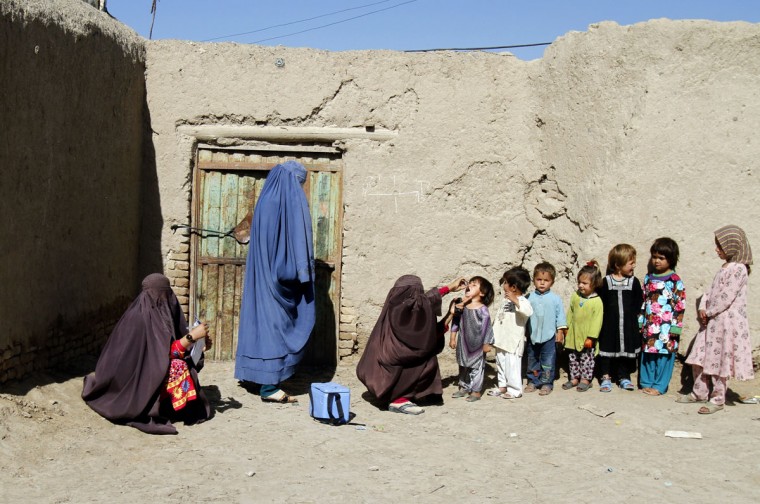 An Afghan health worker gives a vaccination to a child during a polio campaign in Kandahar, south of Kabul, Afghanistan, Monday, April 6, 2015. (AP Photo/Allauddin Khan) 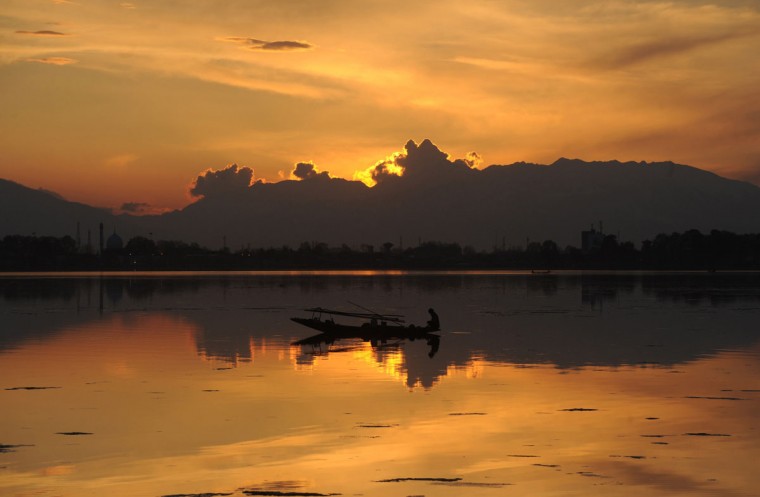 A Kashmiri fisherman paddles his boat on Dal Lake during sunset in Srinagar on April 5, 2015.The sun shined in Kashmir valley after weeks of wet weather which had brought a flood-like situation in Kashmir while National Highway 1A, the only key road connecting Kashmir to the rest of the world, opened after week long. (AFP Photo/Rouf Bhat) 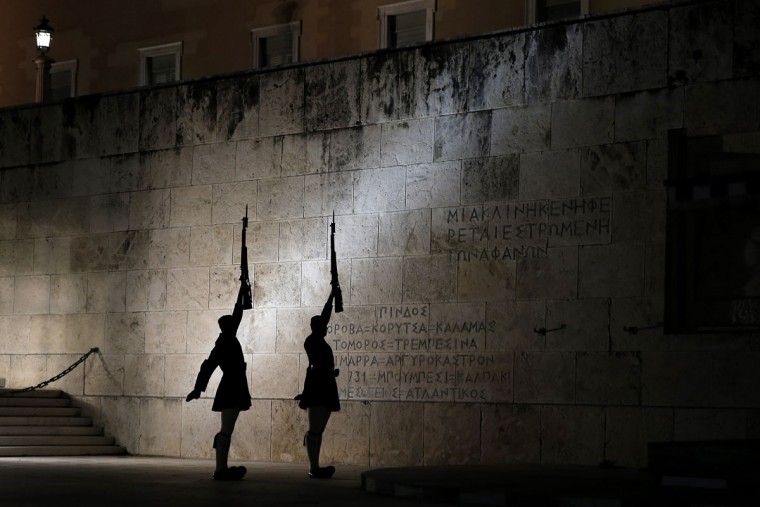 Presidential guards perform during a changing of the guard ceremony, at the tomb of the unknown soldier, in front of the Greek parliament in central Athens, Monday, April 6, 2015. Greece and its international creditors are still struggling to agree on a list of economic reforms that are deemed necessary for the country to unlock emergency funds and stay afloat. (AP Photo/ Petros Giannakouris) 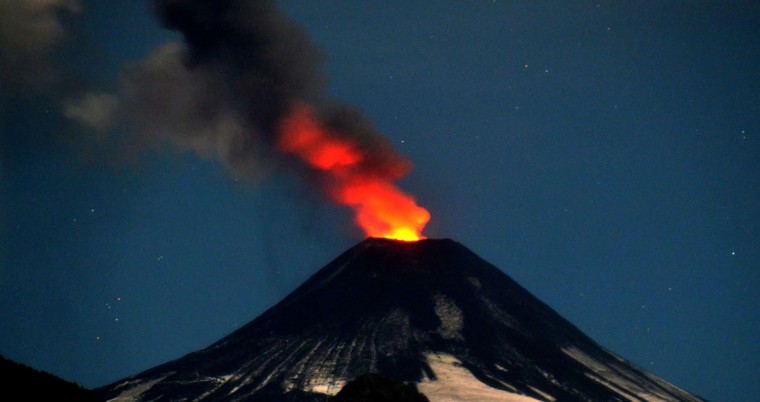 View of the Villarrica volcano from Pucon, some 800 km south of Santiago, showing visible signs of activity on April 5, 2015. Earlier this month, in its first major eruption in 15 years, the Villarrica forced the evacuation of thousands of people amid a shower of fire and ash. (AFP Photo) 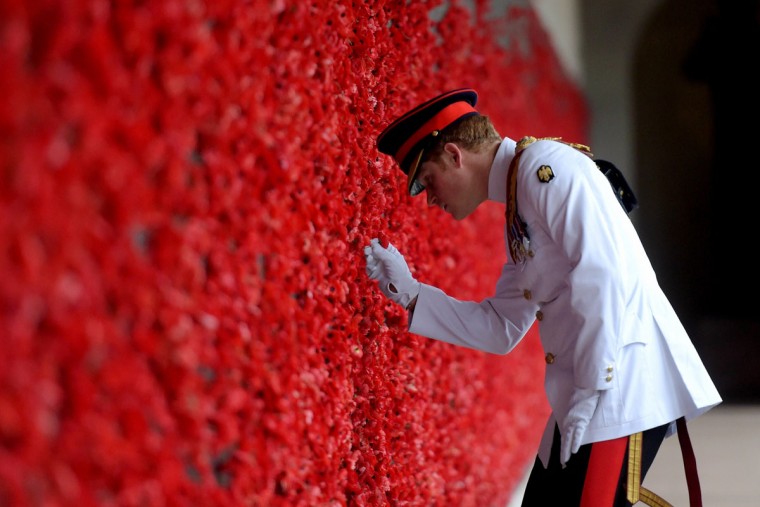 Britain’s Prince Harry places a poppy at the Roll of Honour during a visit to the Australian War Memorial in Canberra on April 06, 2015. Harry arrived in Canberra ahead of a one-month attachment with the Australian Army, as he moves towards his retirement from the British military. (AFP Photo/Lukas Coch) 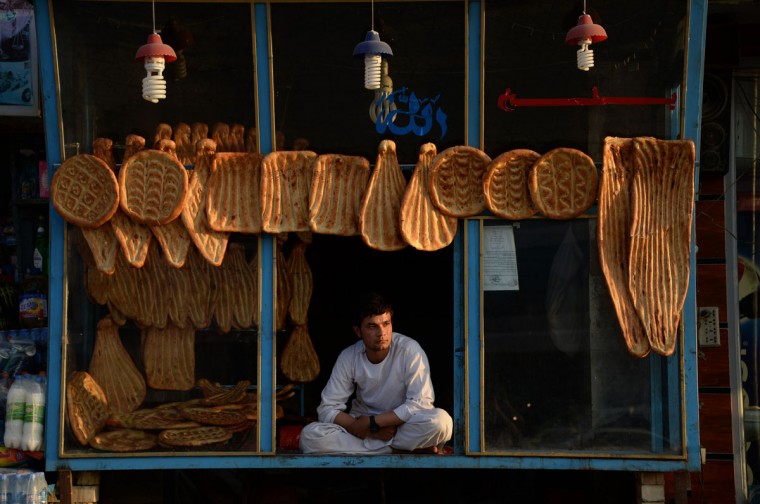 Afghan vendor Samim, 23, sits at his bakery as he waits to sell bread in Mazar-i-sharif on April 5, 2015. (AFP Photo/Farshad Usyan)