A fall at the Drake Relays, prosperity and fire in Manila, controversial tigers | April 24 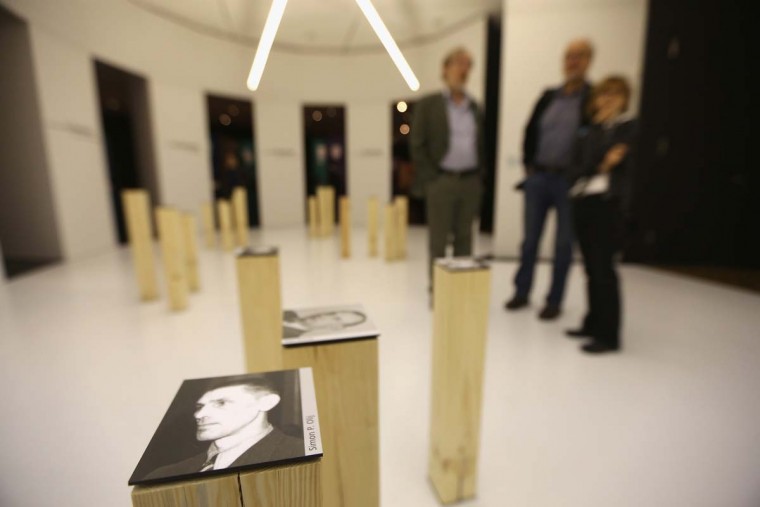 Visitors look at images of victims of the Nazis in the exhibition ‘1945. Niederlage. Befreiung. Neuanfang ‘(‘1945. Defeat. Liberation. New Beginning.’) at the Deutsches Historisches Museum (German Historical Museum) on April 24, 2015 in Berlin, Germany. In recognition of the 70th anniversary of the German capitulation, the exhibition concentrates on Germany and eleven other countries – Austria, Czechoslovakia, Poland, Great Britain, Denmark, Norway, Luxembourg, the Netherlands, Belgium, France and the Soviet Union – at the end of the War and during the years immediately following it. (Photo by Adam Berry/Getty Images) 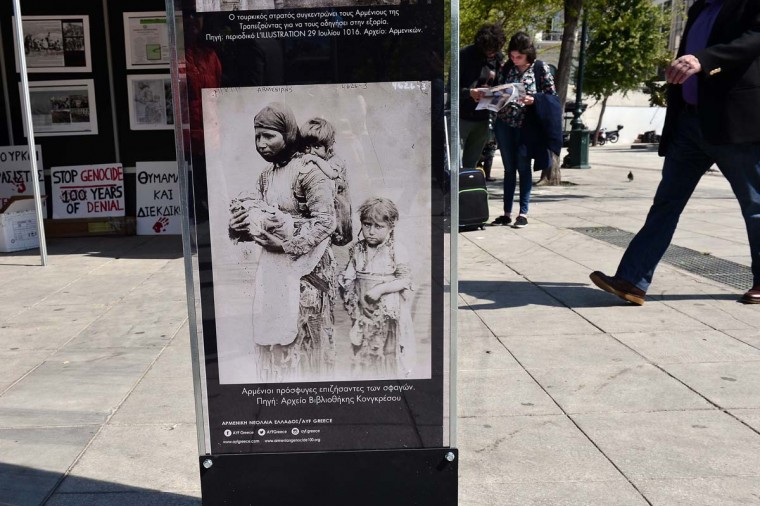 People walk past an open air photo exhibition commemorating the centenary of the massacre of some 1.5 million Armenians by Ottoman forces in Athens, on April 24, 2015. || CREDIT: LOUISA GOULIAMAKI – AFP/GETTY IMAGES

Armenians demonstrate in front of the Turkish consulate to commemorate the 100th anniversary of the 1915 Armenian genocide, in Jerusalem, Israel, Friday, April 24, 2015. Historians estimate up to 1.5 million Armenians were killed by Ottoman Turks around the time of World War I, an event widely viewed by genocide scholars as the first genocide of the 20th century. Turkey, however, denies the deaths constituted genocide, saying the toll has been inflated and that those killed were victims of civil war and unrest. || CREDIT: ODED BALILTY – AP PHOTO 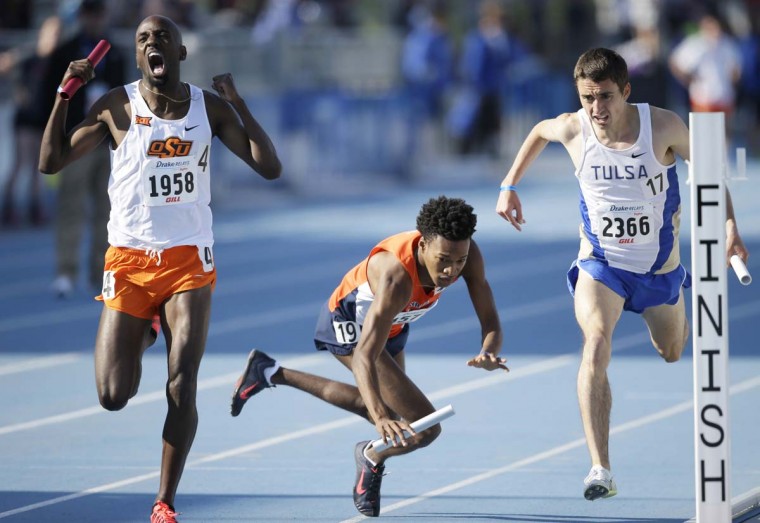 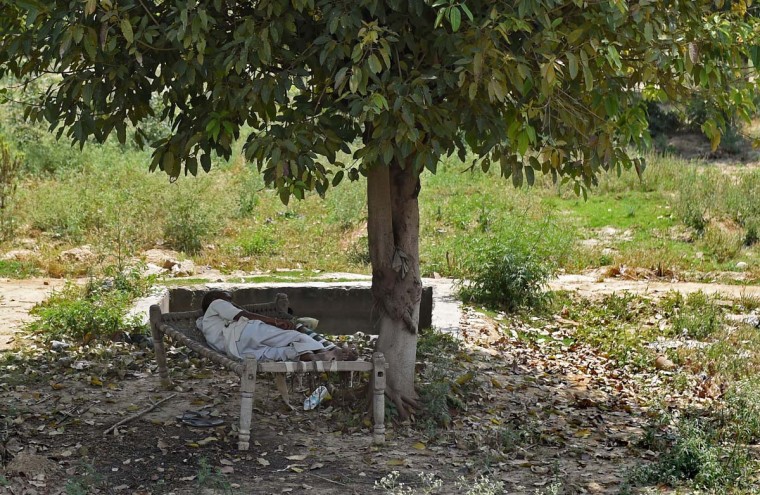 An Indian man takes an afternoon nap under a tree as he shelters from the heat in Faridabad, on the outskirts of New Delhi on April 24, 2015. Temperatures in the Indian national capital continue to rise as the summer season takes hold. || CREDIT: MONEY SHARMA – AFP/GETTY IMAGES 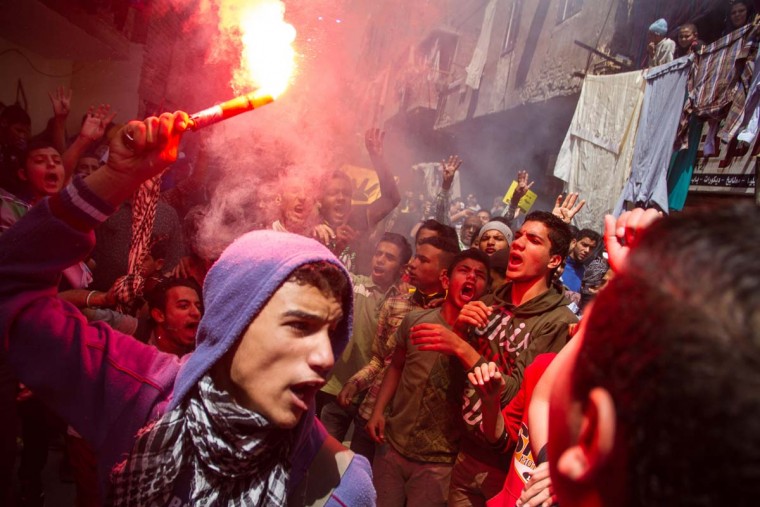 An Egyptian youth carries a lit flare as supporters of the Muslim Brotherhood gather in the El-Mataria neighborhood of Cairo, Egypt, to protest the 20-year sentence for ousted president Mohammed Morsi and verdicts against other prominent figures of the Brotherhood Friday, April 24, 2015. Morsi was convicted of using force against protesters and sentenced to 20 years in prison on Tuesday, the first verdict against him since he was removed by the military nearly two years ago. || CREDIT: BELAL DARDER – AP PHOTO 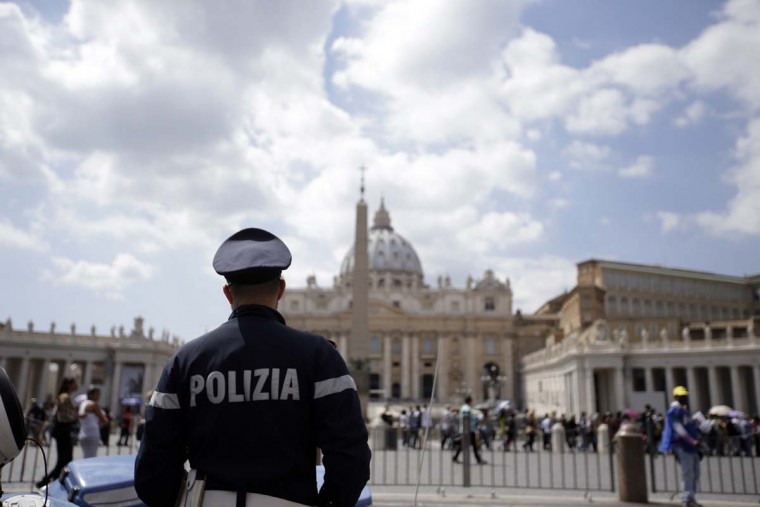 A police officer patrols outside St. Peter’s Square, in Rome Friday, April 24, 2015. Islamic extremists suspected in a bomb attack in a Pakistani market that killed more than 100 people had also planned an attack against the Vatican in 2010 that was never carried out, an Italian prosecutor said Friday. Wiretaps collected as part of investigation into an Islamic terror network operating in Italy gave “signals of some preparation for a possible attack” at the Vatican, prosecutor Mauro Mura told a news conference in Cagliari, Sardinia. || CREDIT: GREGORIO BORGIA – AP PHOTO 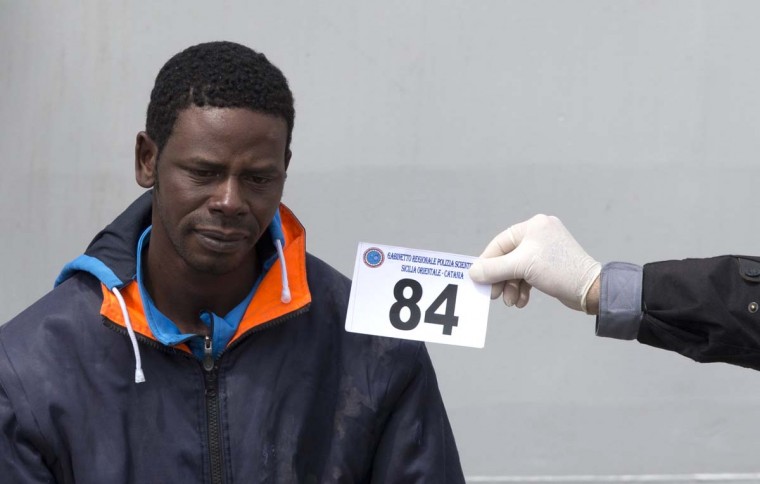 An Italian forensic police officer holds a numbered tag as he identifies a man who disembarked from the Italian Coast Guard ship ‘ Fiorillo ‘ at the Catania harbor, Sicily, southern Italy, Friday, April 24, 2015. The European Union’s border agency Frontex is to send its ships further into the Mediterranean Sea in response to a deadly exodus of migrants leaving Libya. || CREDIT: ALESSANDRA TARANTINO – AP PHOTO 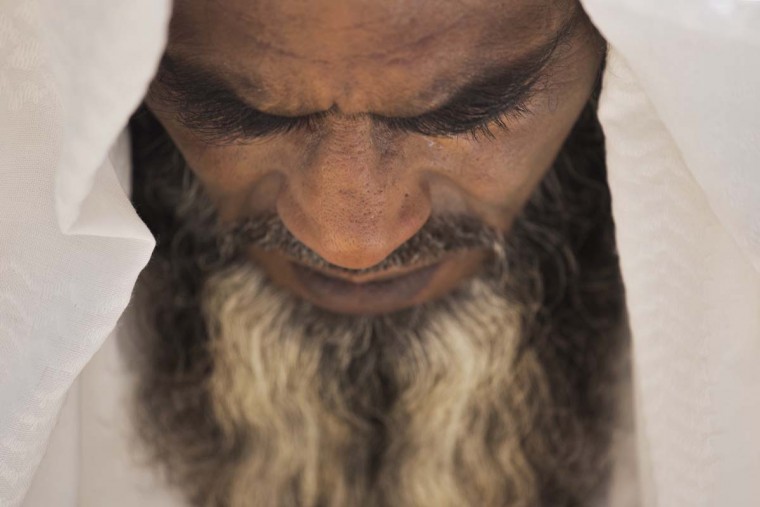 An Indian muslim man prays at the shrine of sufi saint Khwaja Moinuddin Chishti in Ajmer, in the western Indian state of Rajasthan, India, Friday, April 24, 2015. Thousands of pilgrims from different parts of India attend the yearly Urs sufi festival that marks the death anniversary of the sufi saint. At the time of the Urs, that continues for six days, a busy market springs up at the foot of the shrine with flowers, embroidered prayer rugs and prayer caps being among the many things to be found apart from the usual souvenirs. || CREDIT: BERNAT ARMANGUE – AP PHOTO 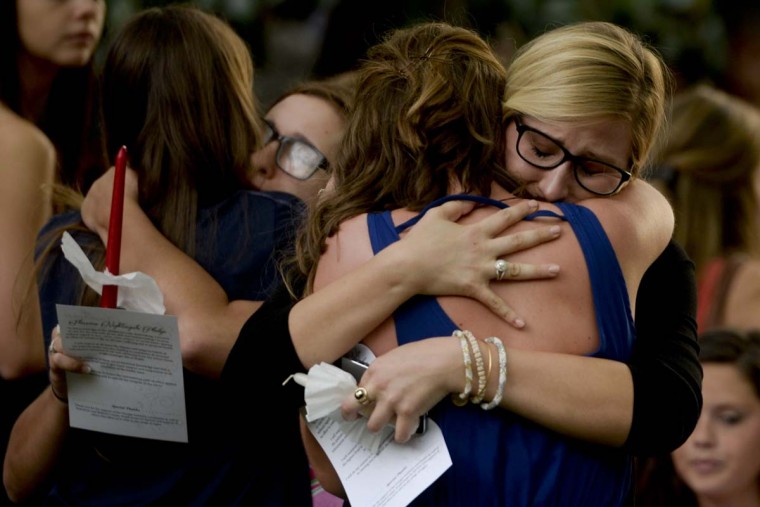 Members of Alpha Omicron Pi console each other during a candlelight vigil and memorial service for five nursing students who were killed in a multi-vehicle accident, Thursday, April 23, 2015, at Georgia Southern’s Statesboro campus in Statesboro, Ga. The deadly, chain-reaction crash early Wednesday on Interstate 16 involved six vehicles. (Ian Maule/Savannah Morning News via AP) THE EXAMINER.COM OUT; SFEXAMINER.COM OUT; WASHINGTONEXAMINER.COM OUT ORG XMIT: GASAV201 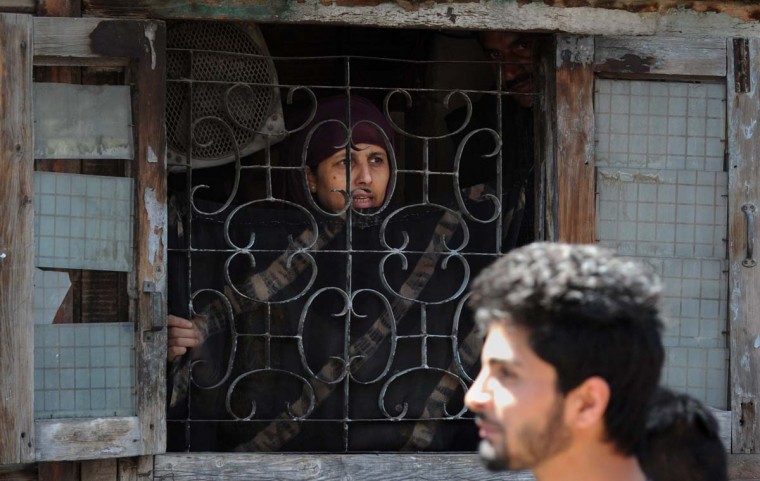 A Kashmiri resident watches as activists from the Muslim League (ML) shout anti-Indian and pro-freedom slogans during a protest in Srinagar on April 24, 2015. Muslim League chairman and seperatist leader Masrat Alam has been arrested after raising pro-Pakistan slogans at a peaceful separatist rally in which activists waved Pakistani flags. Kashmir is divided between India and Pakistan but both claim the whole of the region and have gone to war twice over its control since partition in 1947. || CREDIT: TAUSEEF MUSTAFA – AFP/GETTY IMAGES 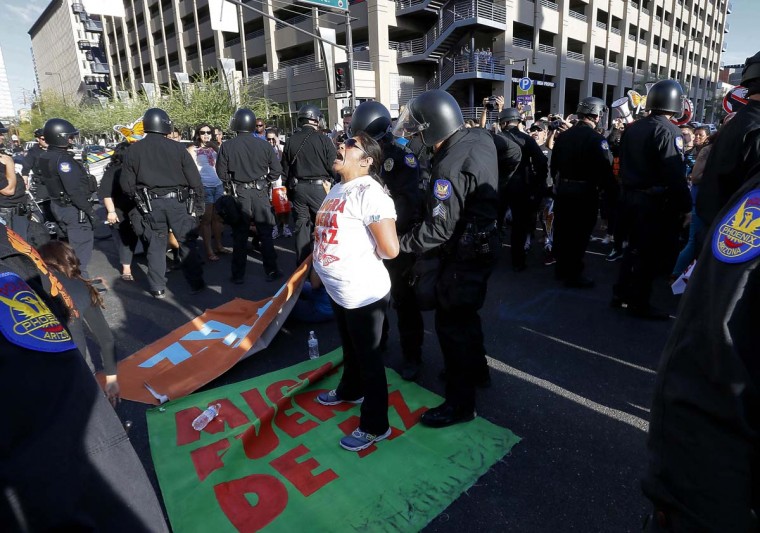 A protestor of U.S. Immigration and Customs Enforcement (ICE) agents working with Maricopa County Sheriff Joe Arpaio, is arrested by Phoenix Police officers, Thursday, April 23, 2015, for blocking the intersection in front of the U.S. Federal Court in Phoenix. The protest to remove ICE agents from county jails is in conjunction with the fifth anniversary of Arizona’s SB 1070 immigration bill. || CREDIT: MATT YORK – AP PHOTO 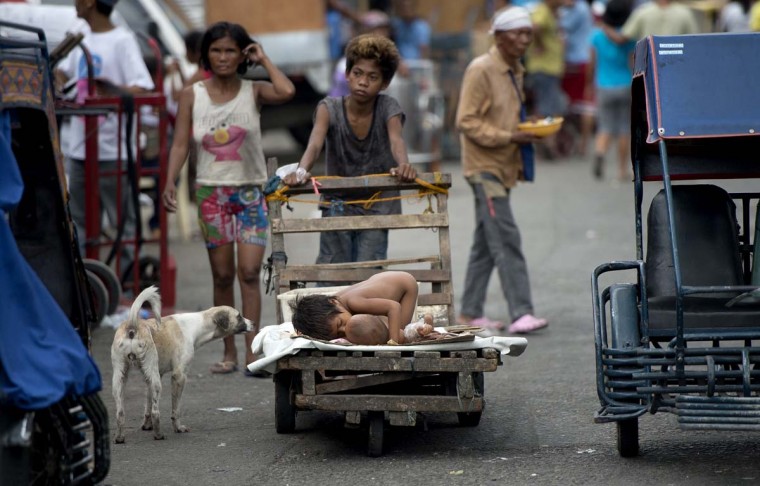 A boy pushes a wooden cart with his siblings on it at a market in Manila on April 24, 2015. The Philippines beat expectations after a surprising economic rebound saw growth accelerate in the last three months of 2014, with officials predicting further strong expansion in the year ahead. || CREDIT: NOEL CELIS – AFP/GETTY IMAGES 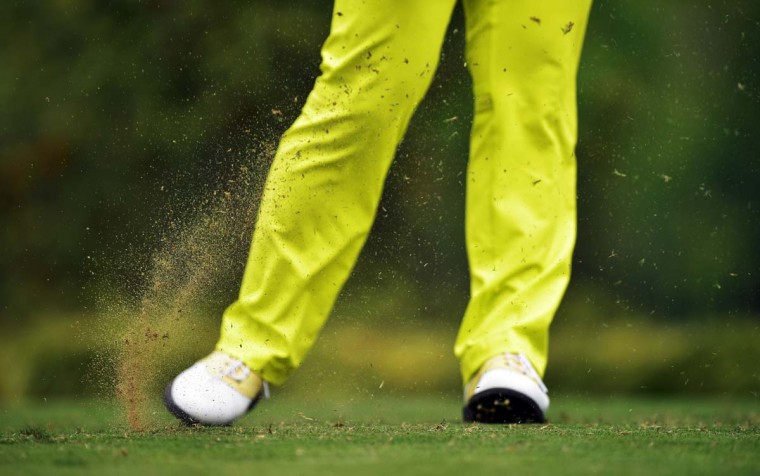 Ryu Hyun-woo of South Korea tees off during the second round of the Volvo China Open golf tournament in Shanghai on April 24, 2015. || CREDIT: JOHANNES EISELE – AFP/GETTY IMAGES 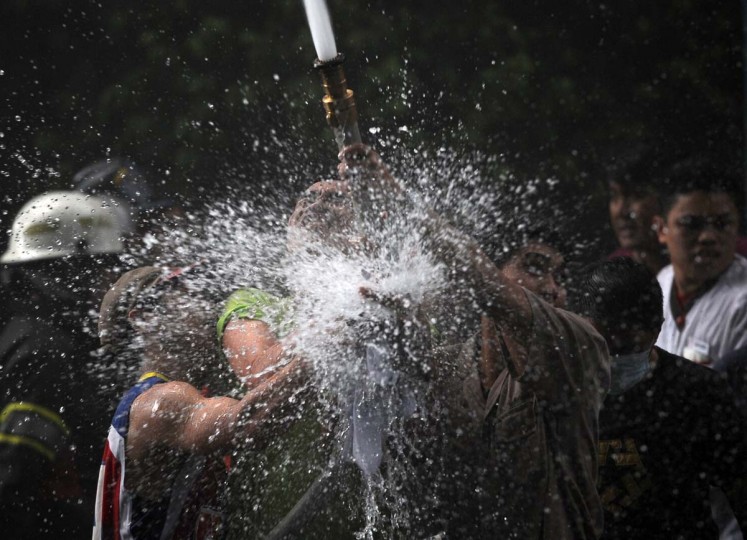 Volunteer firefighters try to control a water hose while extinguishing a fire on the ground floor of a building under construction in the Makati financial district of Manila on April 24, 2015. No one was reported injured in the incident. || CREDIT: TED ALJIBE – AFP/GETTY IMAGES 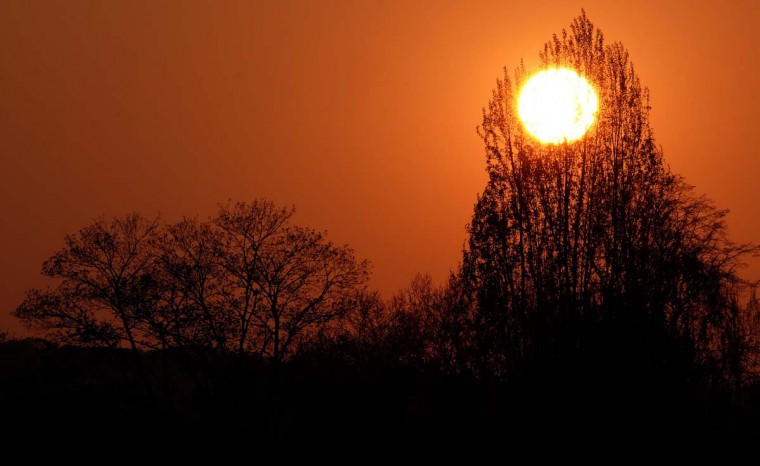 Trees along the Ruhr river are seen during sunset in the western German city of Essen on April 23, 2015. PATRIK STOLLARZ – AFP/GETTY IMAGES 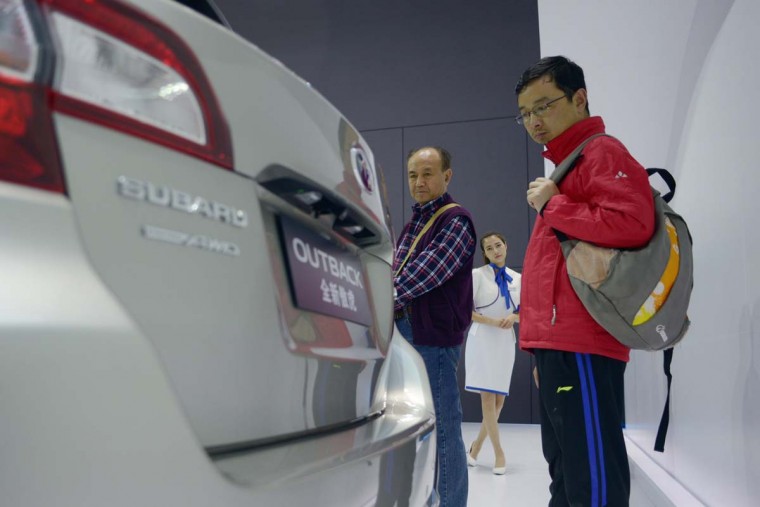 Visitors look at a Subaru car during the 16th Shanghai International Automobile Industry Exhibition in Shanghai on April 24, 2015. The vast majority of cars in the world’s biggest auto market are purchased new, but a second-hand trade is beginning to emerge in China despite traditional buyer reluctance — and foreign manufacturers are hoping to benefit. || CREDIT: WANG ZHAO – AFP/GETTY IMAGES 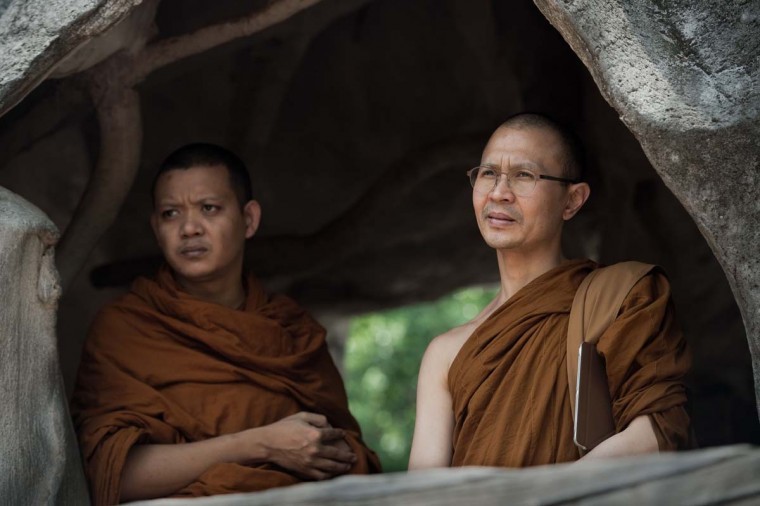 Buddhist monks look on as Thai wildlife officials (not seen) scan the microchip implanted in a tiger at the Tiger Temple in Kanchanaburi province on April 24, 2015. Thai wildlife officials began a headcount of nearly 150 tigers kept by monks at a controversial temple which has become the centre of a dispute over the welfare of the animals. || CREDIT: NICOLAS ASFOURI – AFP/GETTY IMAGES 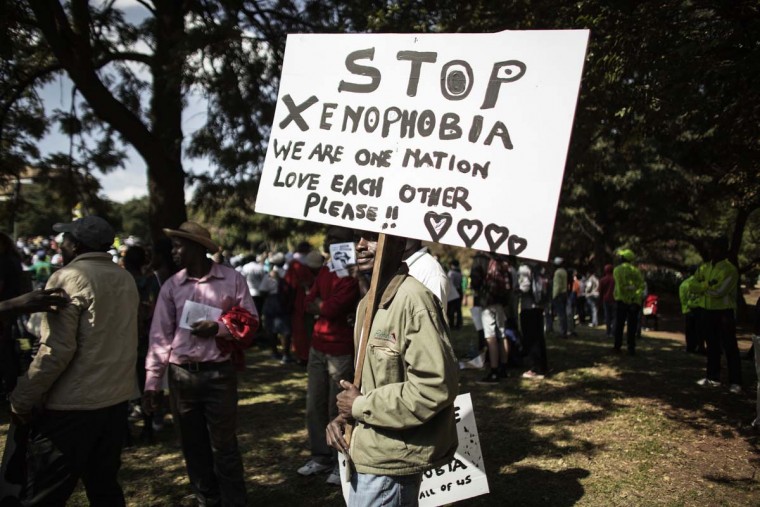 A demonstrator holds a banner through in Johannesburg on April 23, 2015 during a march gathering several thousands of people to protest against the recent wave of xenophobic attacks in South Africa. President Jacob Zuma pledged to tackle xenophobia in South Africa as troops were sent in to support police in a crackdown against attacks on immigrants that have left at least seven people dead. || CREDIT: GIANLUIGI GUERCIA – AFP/GETTY IMAGES 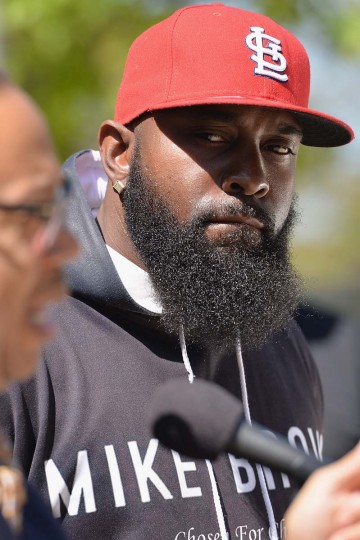 Father of slain 18 year-old Michael Brown Jr. attends a press conference outside the St. Louis County Court Building on April 23, 2015 in Clayton, Missouri. Family members have announced a civil lawsuit over the death of Michael Brown Jr. this past August in Ferguson, Missouri. (Photo by Michael B. Thomas/Getty Images) 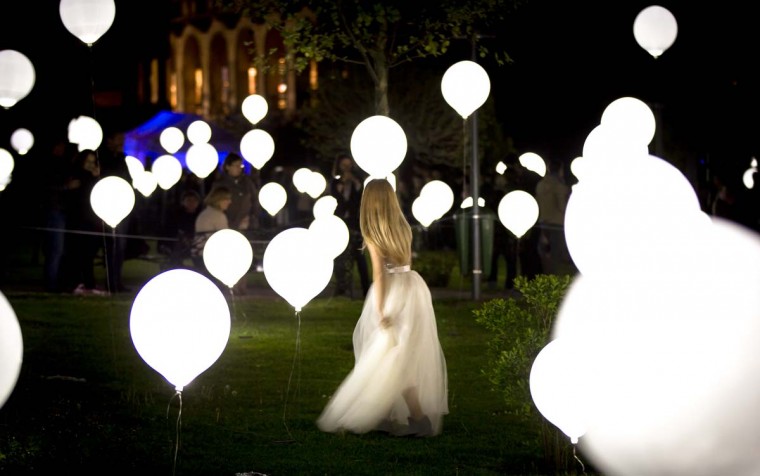