On February 2nd, the famous weather prognosticator Punxsutawney Phil saw his shadow and proclaimed six more weeks of winter. Little did we know how bitter cold and snowy it would be. According to a Baltimore Sun article, February 2015 was the second coldest on record with an average temperature of 25.3 degrees, the coldest since 1934. Though we haven’t seen record snow falls, what we have seen along with the cold temperatures have lead to hard winter for the greater Baltimore region. The most recent snowfall left six to 10 inches through out the area. Creating work and nuisance for some, and a reason to get out and play for others. In addition, it also created beautiful scenic landscapes. Here are some of the best photos from that storm. 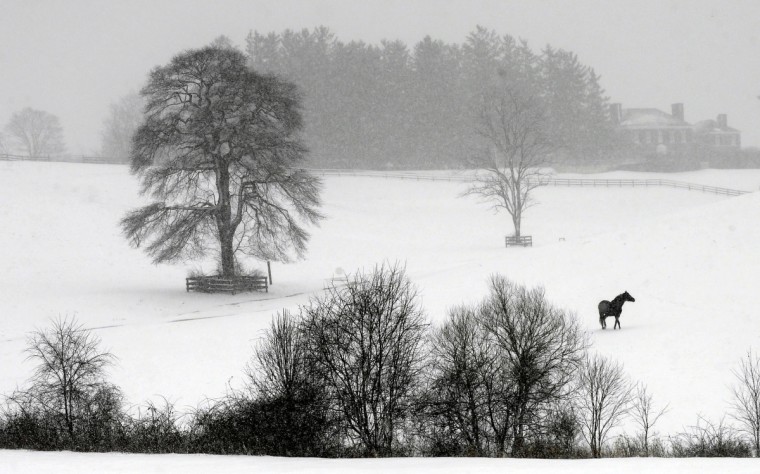 A scene from Pocock Road during the morning Snowfall in Fallston Maryland. (Lloyd Fox/BSMG) 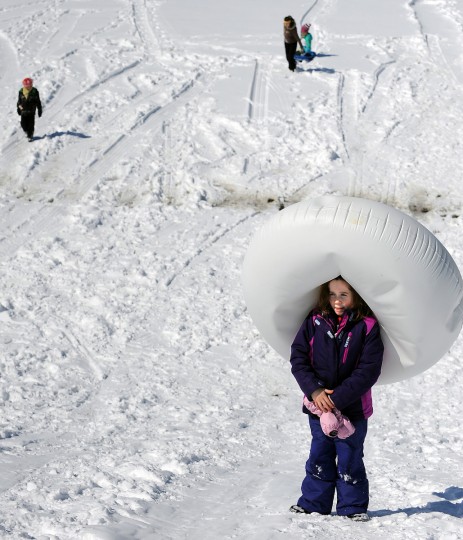 Caroline Caputo, 7, of Annapolis, makes her way back up a snowy hill with an inner tube. People take advantage of the sun and snow at St. John’s College. (Paul W. Gillespie/BSMG) 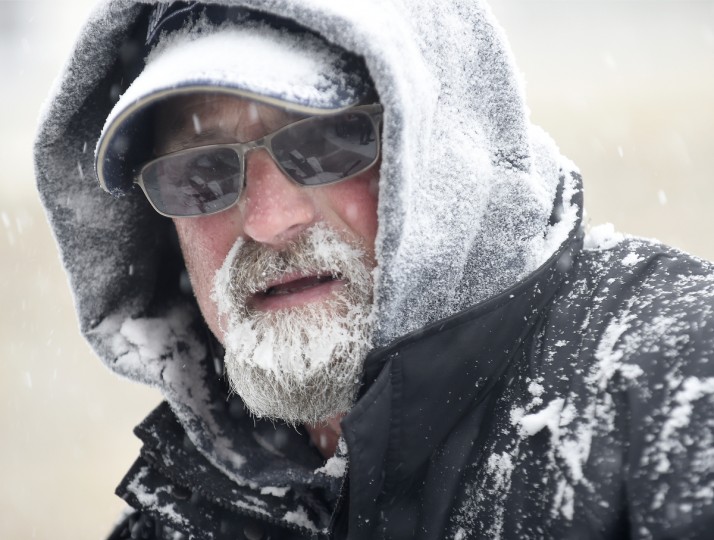 Snow clings to Worth Kerr’s facial hair as he uses a snowblower to clear sidewalks in front of the Rape Crisis Intervention Service of Carroll County on Center Street in Westminster as heavy snow falls. (Dave Munch/BSMG) 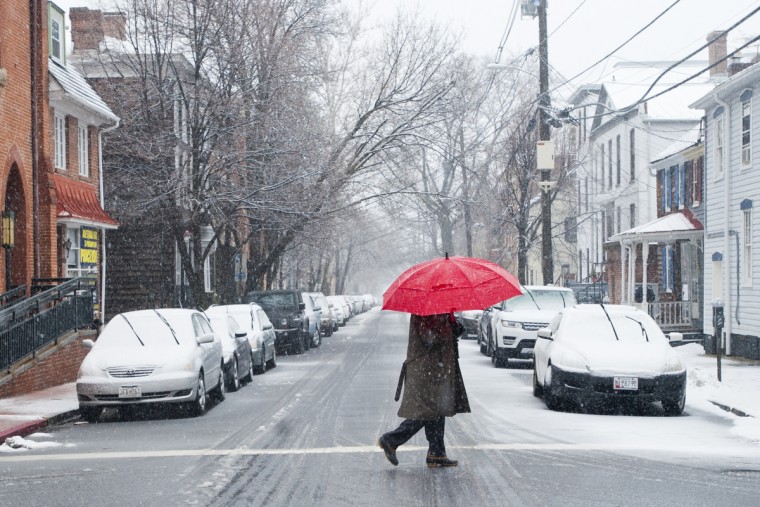 Umbrellas are the order of the day on Maryland Avenue in Annapolis as the snow falls. (Joshua McKerrow/BSMG) 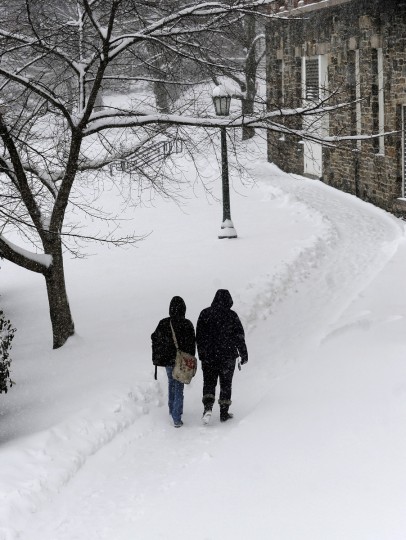 People walk through the snow on the campus of McDaniel College in Westminster. (Dylan Slage/BSMG) 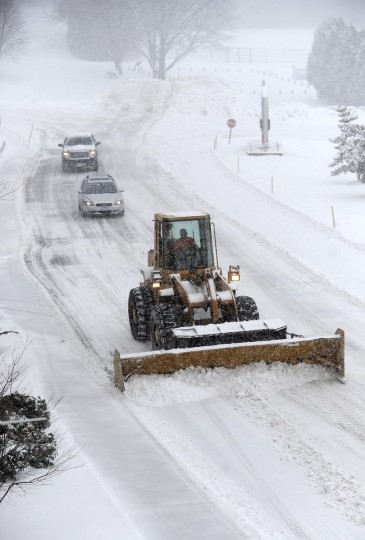 Workers use a variety of equipment to clear snow covered drives and walkways outside Carroll Hospital Center in Westminster as snow falls. (Dylan Slagle/BSMG) 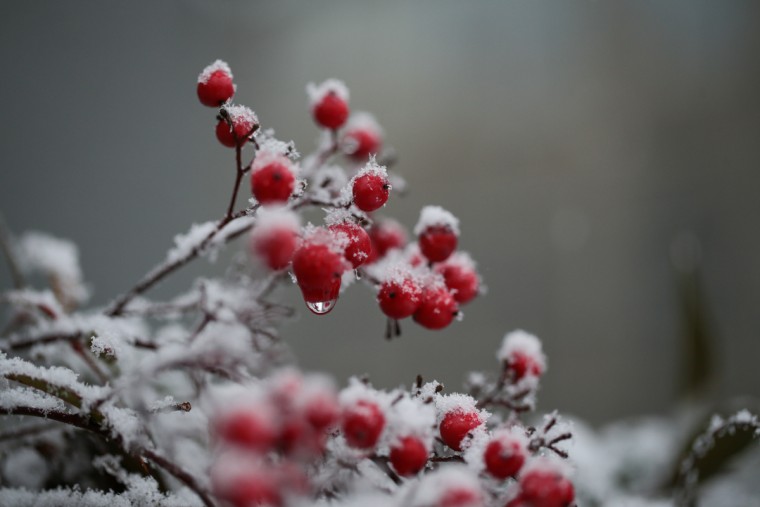 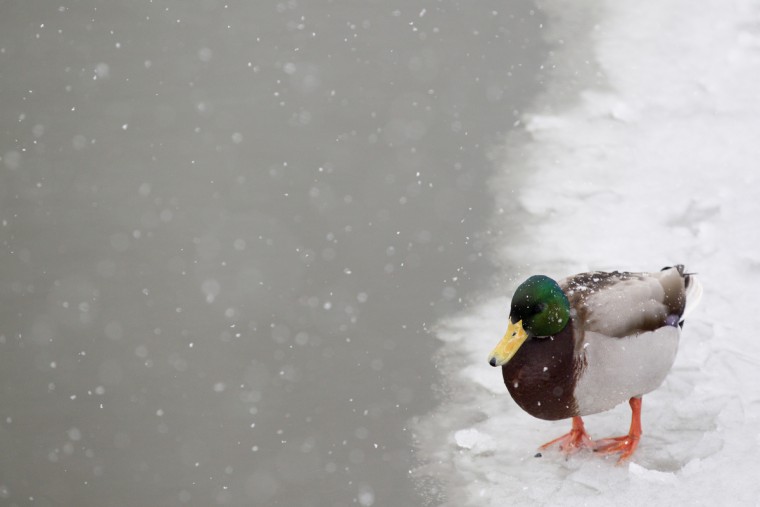 A duck stands on a frozen part of the water near Captain James Seafood Palace in Baltimore , MD. (Jen Rynda/BSMG) 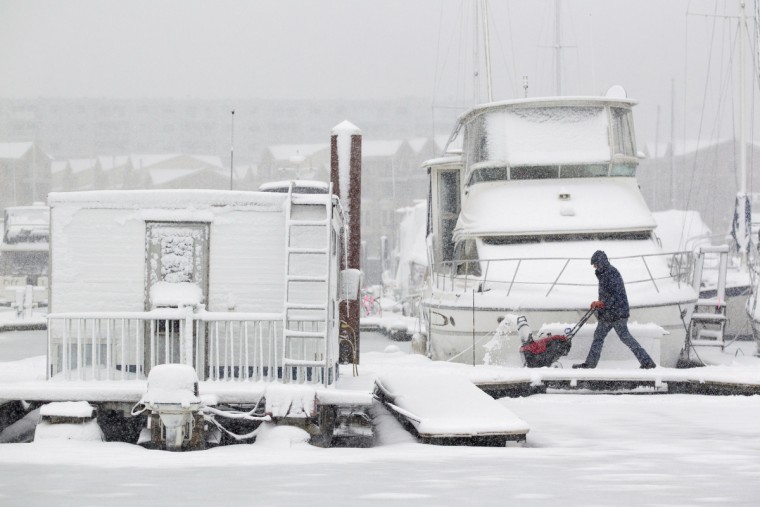 Snow is removed from docks at Anchorage Marina in Canton, MD. (Jen Rynda/BSMG) 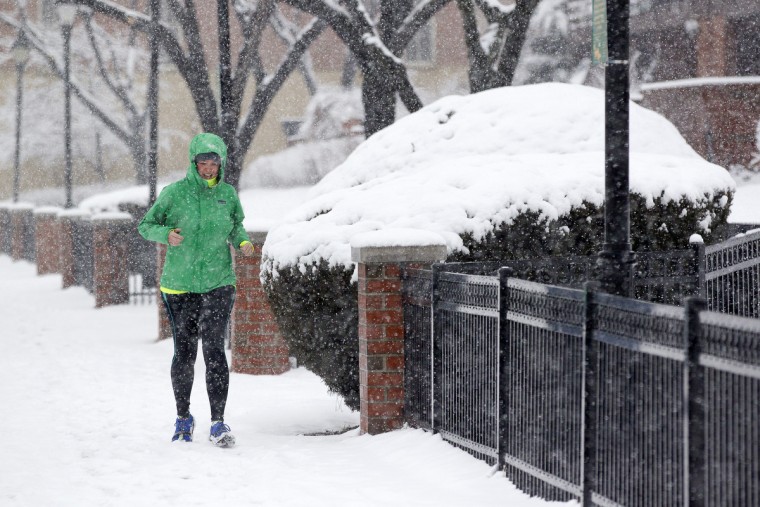 Krsitin Cunningham of Canton runs along the water in Canton, MD. She said, “This is how I play in the snow now.” (Jen Rynda/BSMG) 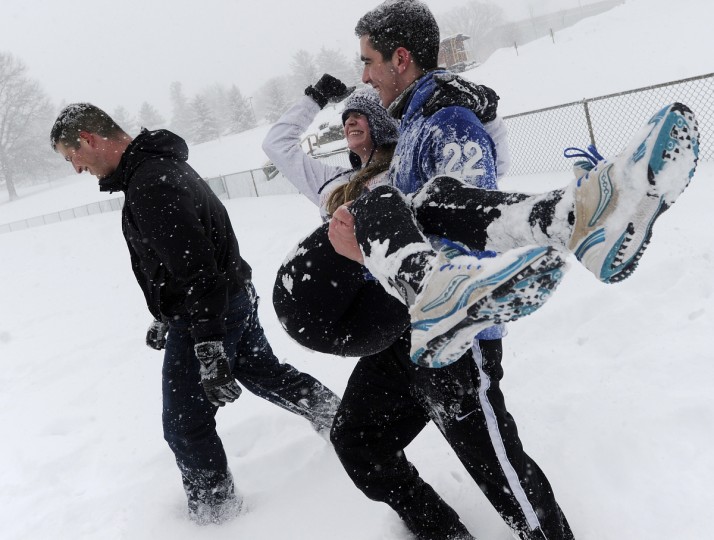 McDaniel College junior Nick Mollica, right, carries sophomore Mollie Murphy after she took a spill in the snow while playing a game of ultimate frisbee at McDaniel College in Westminster. (Dylan Slagle/BSMG) 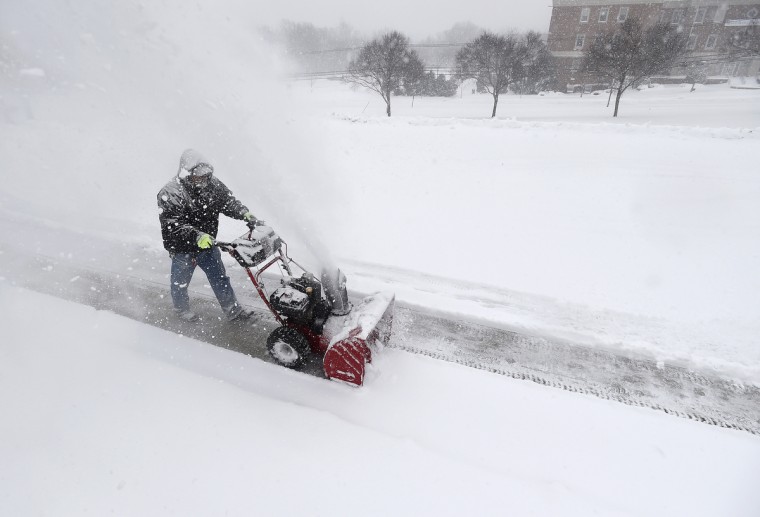 Worth Kerr uses a snowblower to clear sidewalks in front of the Rape Crisis Intervention Service of Carroll County on Center Street in Westminster as heavy snow falls. (Dave Munch/BSMG) 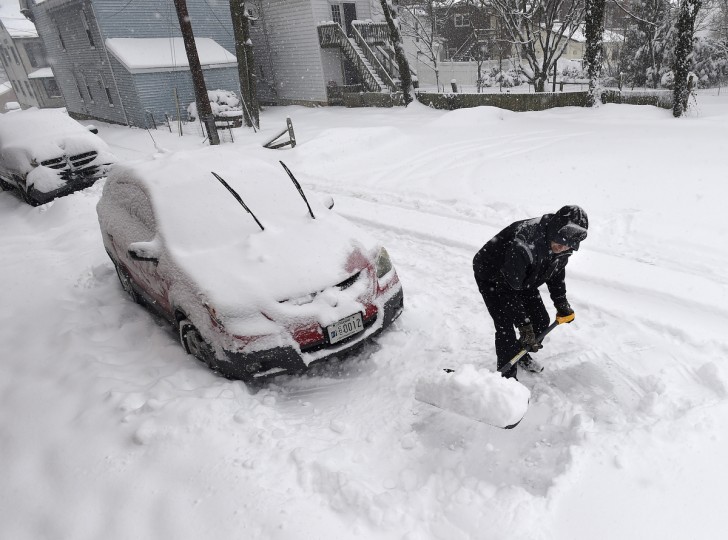 William Wilker digs out his car along Lincoln Road in Westminster. Wilker wanted to be ready to drive his wife to work if needed. (Dave Munch/BSMG) 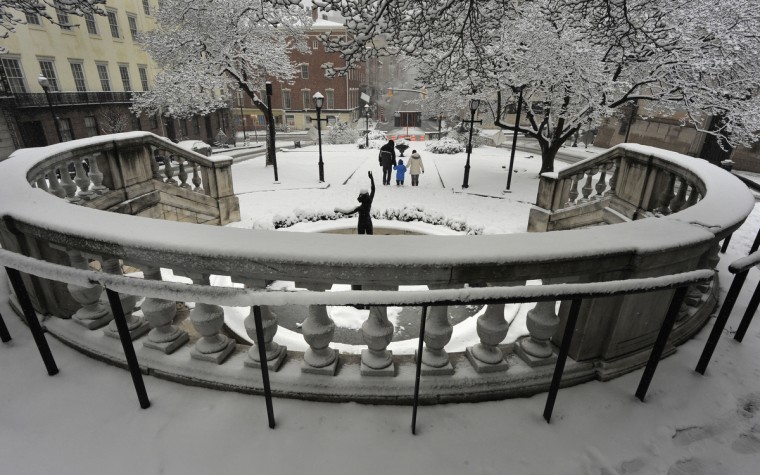 Steve Sawicki and his wife, Nora Sawicki from Mount Vernon enjoy a stroll down Charles Street this afternoon. Snowfall in Baltimore. (Lloyd Fox/BSMG) 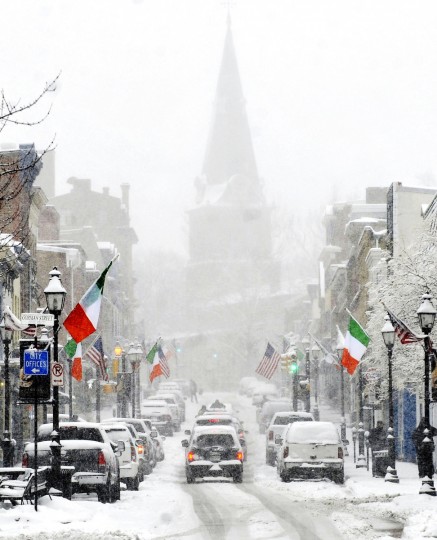 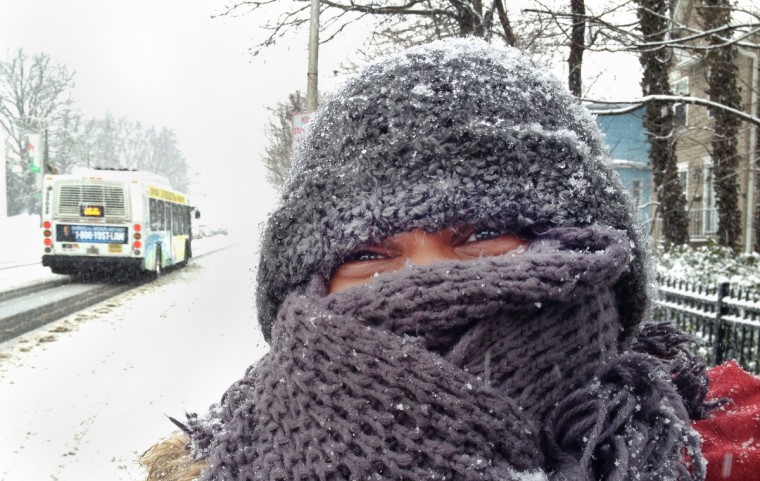 Breanna King waits for a bus northbound on York Road near Northern Parkway to get to her job as a cook at the Holly Hills nursing home. (Amy Davis/BSMG) 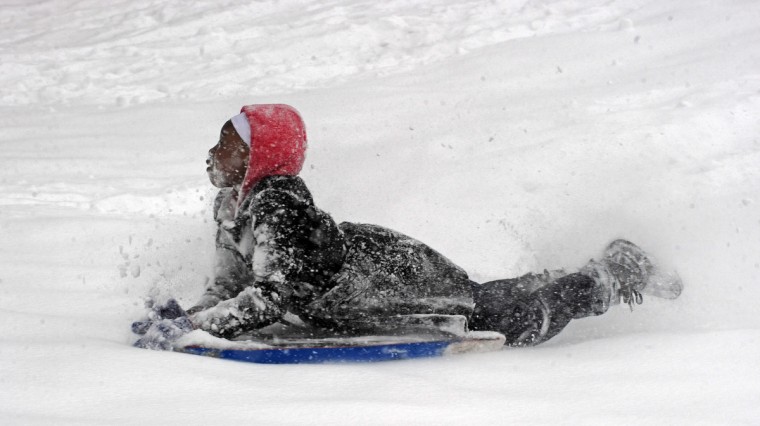 Tysha”e Reese, 12, slides down a slope at Friendship Academy at Cherry Hill during a day off from school because of snow. (Kenneth K. Lam/BSMG) 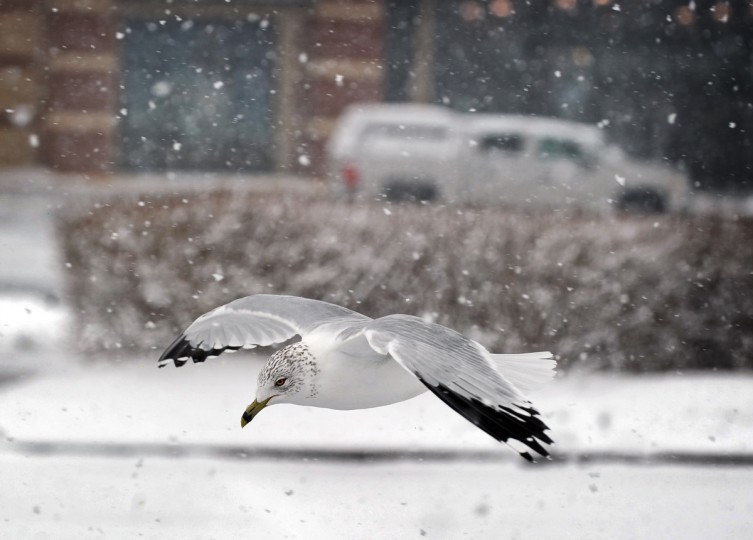 A gull flies during a snow fall at the parking lot of Governor’s Plaza on Ritchie Highway in Glen Burnie. (Kenneth K. Lam/BSMG) 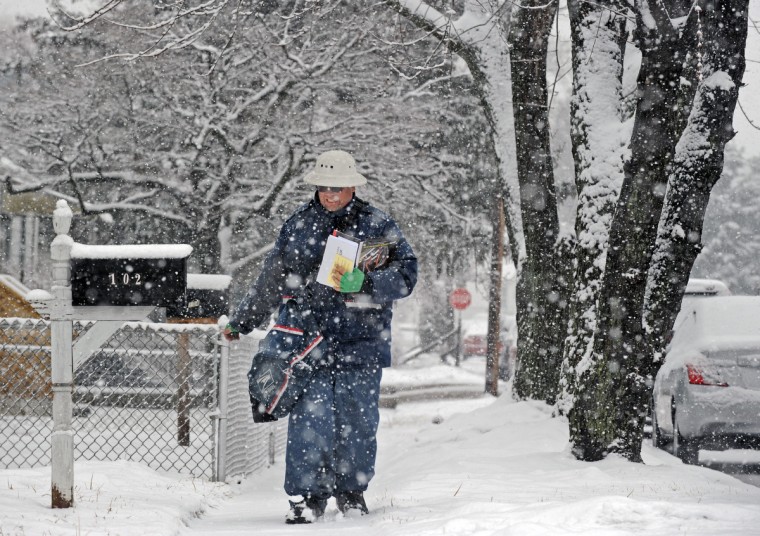 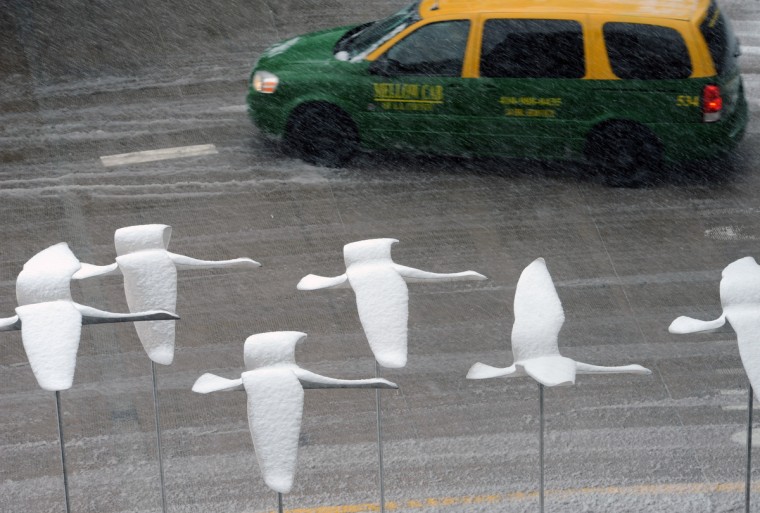 Bird sculptures at Baltimore/Washington Thurgood Marshall International Airport are covered with snow. Many flights at the airport are delayed or cancelled as the latest winter storm causes delays. (Kim Hairston/BSMG) 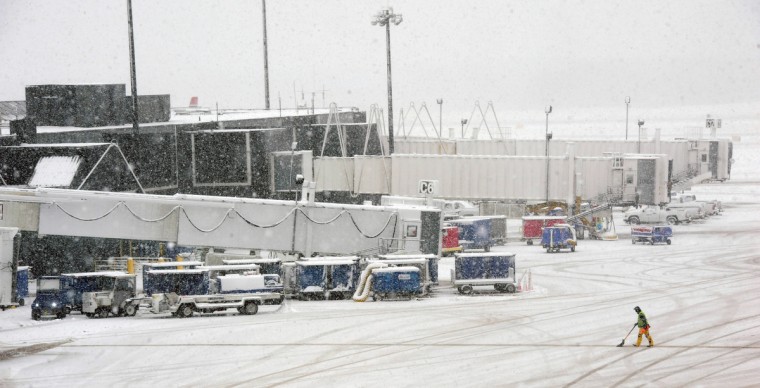 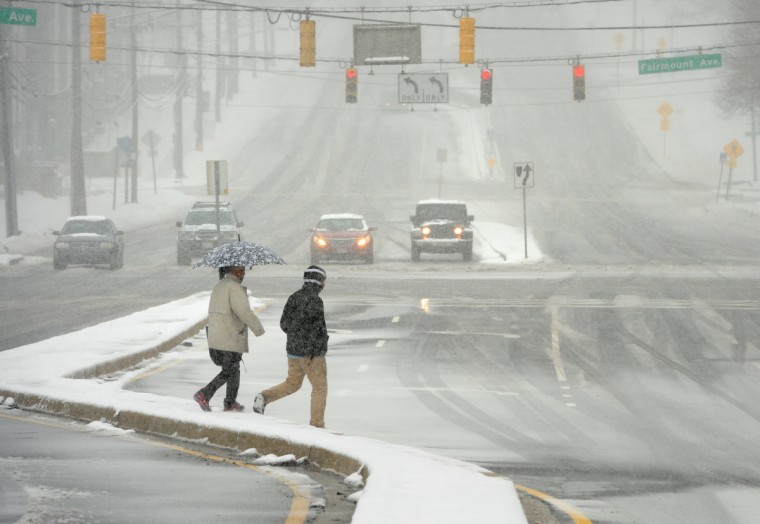 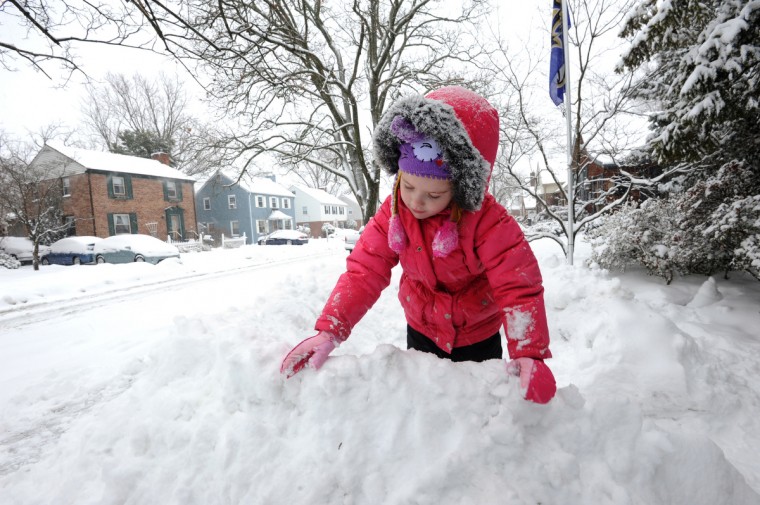 Izabel Greely makes an igloo from the snow her father, Bryan, shoveled from their walkways on Locust Drive in Catonsville, MD. (Algerina Perna/BSMG) 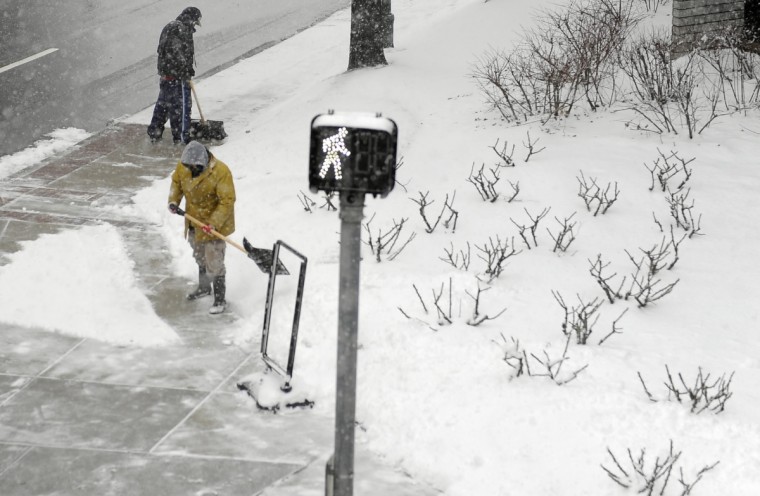 Workers clear a sidewalk outside the Towsontown Center Mall during this morning’s snowstorm. (Barbara Haddock Taylor/BSMG) 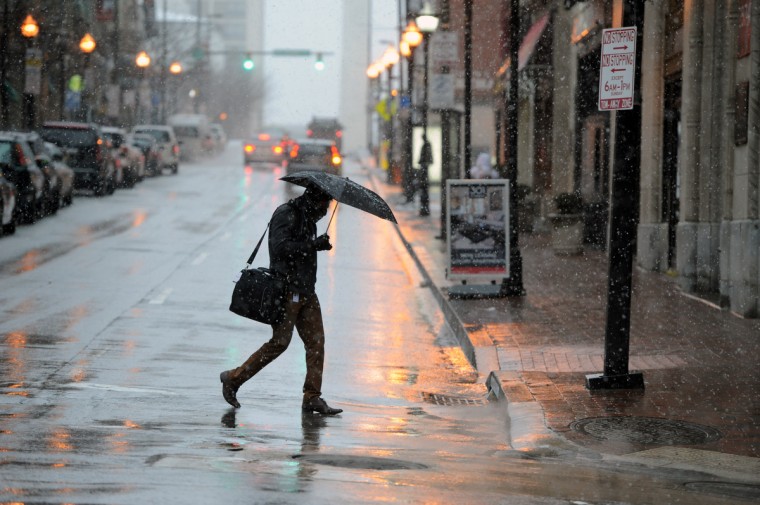 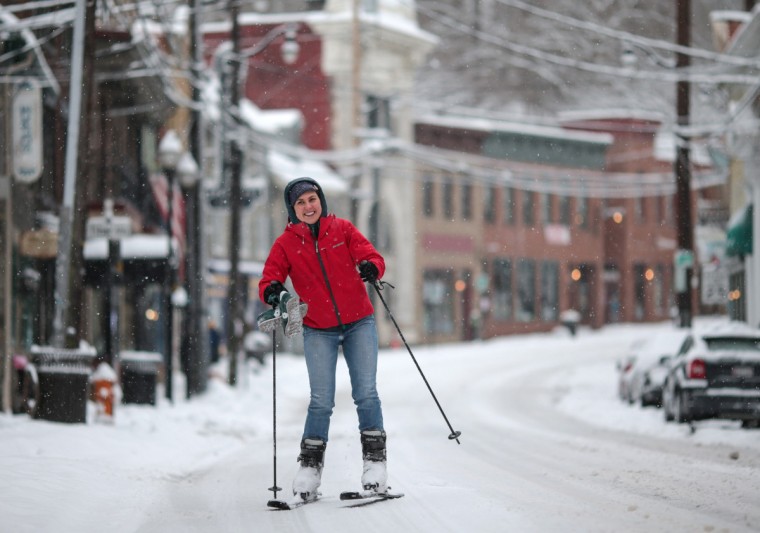 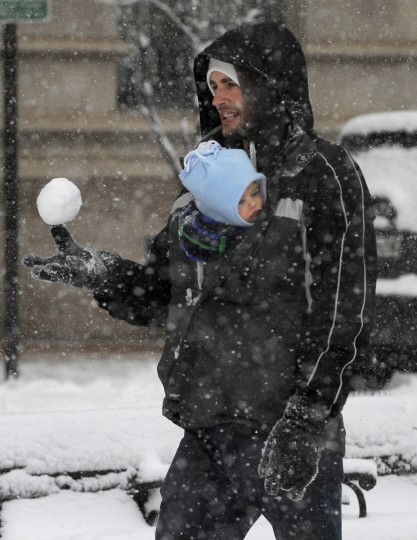 Steve Sawicki of Baltimore with his 10 month-old daughter, Celia Sawicki as they enjoy a walk in Mount Vernon. (Lloyd Fox/BSMG) 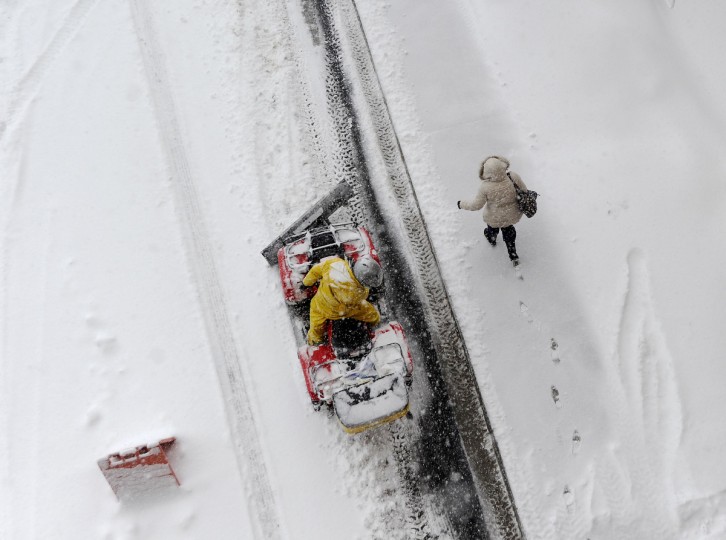 A worker uses an ATV to clear snow covered drives and walkways outside Carroll Hospital Center in Westminster as snow falls. (Dylan Slagle/BSMG) 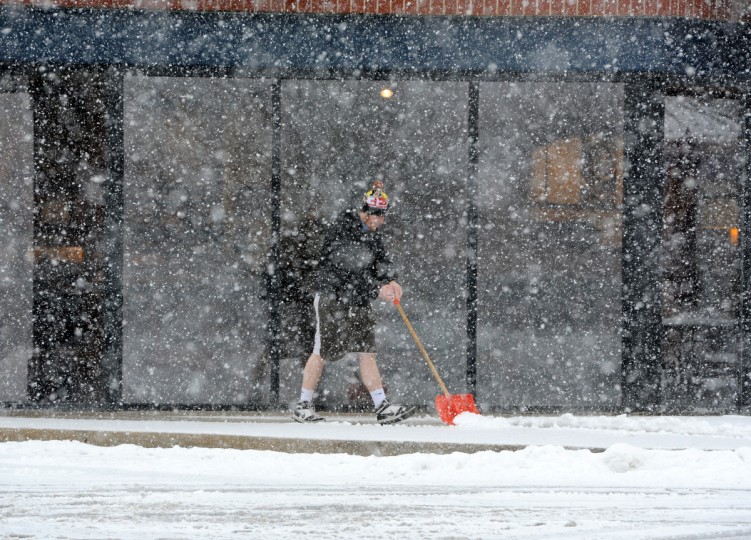 Panera Bread employee James Sebeck tries to keep up with the falling snow as he clears snow from the sidewalk around the store in the Festival at Bel Air. (Matt Button/BSMG) 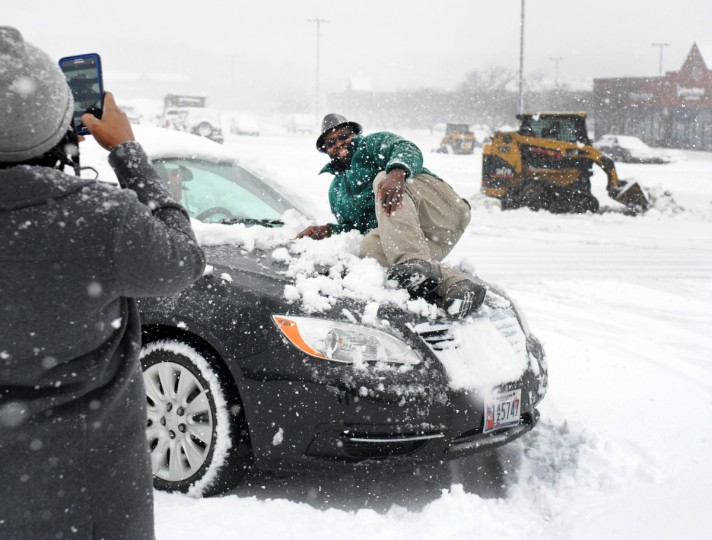 Hugh McCrae has some fun as he strikes a pose on the hood of his snow covered car as girl friend Cheryl Watkin snaps a few photos in the paring lot at the Festival at Bel Air. (Matt Button/BSMG)