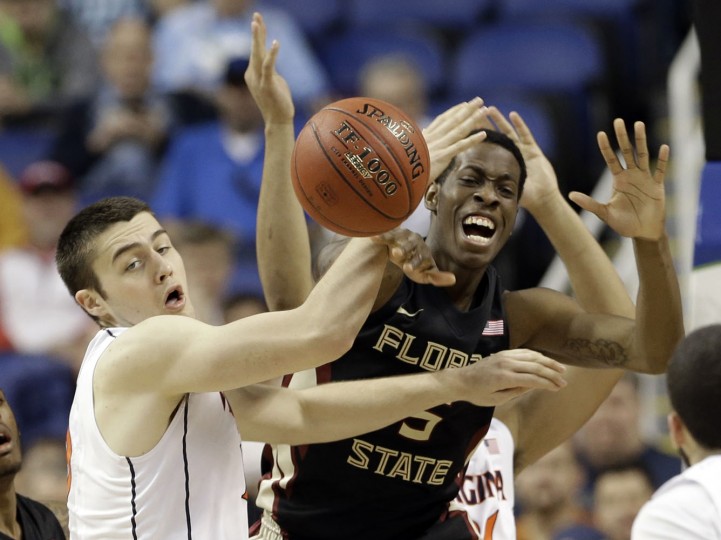 Virginia’s Mike Tobey, left, and Florida State’s Jarquez Smith, right, battle for a rebound during the second half of an NCAA college basketball game in the quarterfinals of the Atlantic Coast Conference tournament in Greensboro, N.C., Thursday, March 12, 2015. (AP Photo/Gerry Broome) 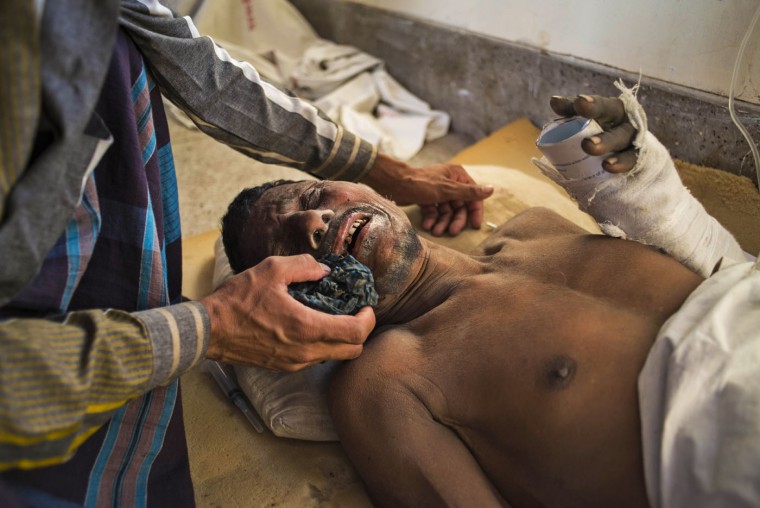 A Bangladeshi man wipes the face of one of the workers injured in the collapse of a cement factory roof, after he is brought in for treatment at the Khulna Medical Hospital in Khulna, Bangladesh, Thursday, March 12, 2015. About 150 workers were on duty when the roof of a five-story cement factory under construction collapsed Thursday at Mongla in Bagerhat district. (AP Photo/Shaikh Mohir Uddin) 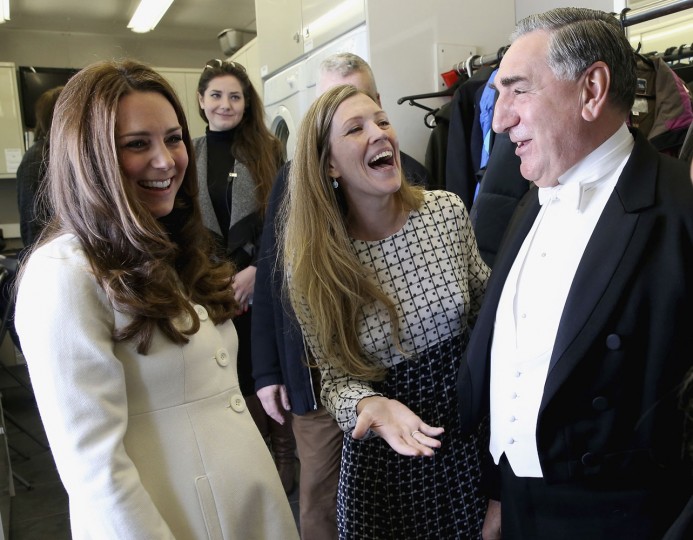 Britain’s Kate Duchess of Cambridge, left, chats to actor Jim Carter, who portrays the butler Carson, during an official visit to the set of the TV series Downton Abbey at Ealing Studios in London Thursday March 12, 2015 . (AP Photo/Chris Jackson, Pool) 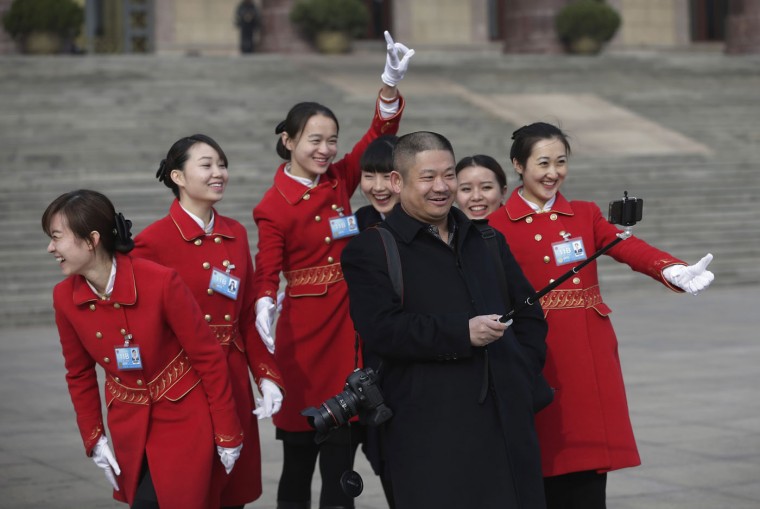 Chinese hostesses who serve the delegates of the National People’s Congress share a light moment as they pose for a selfie photo with a photographer during a plenary session of the NPC held at the Great Hall of the People in Beijing Thursday, March 12, 2015. Thousands of delegates from across the country are in the Chinese capital to attend the annual National People’s Congress and the Chinese People’s Political Consultative Conference. (AP Photo/Andy Wong) 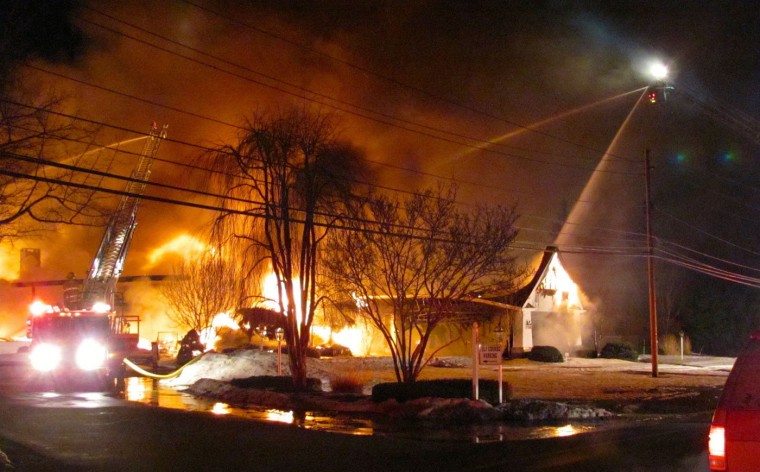 Firefighters try to put out a fire at the main clubhouse of the Madison Country Club Thursday morning, March 12, 2015, in Madison, Ohio. Fire officials say crews from more than 20 departments and three counties were called to help fight the flames. Officials say the fire spread quickly and the building is considered to be a complete loss. (AP Photo/The Plain Dealer, Cliff Pinckard) 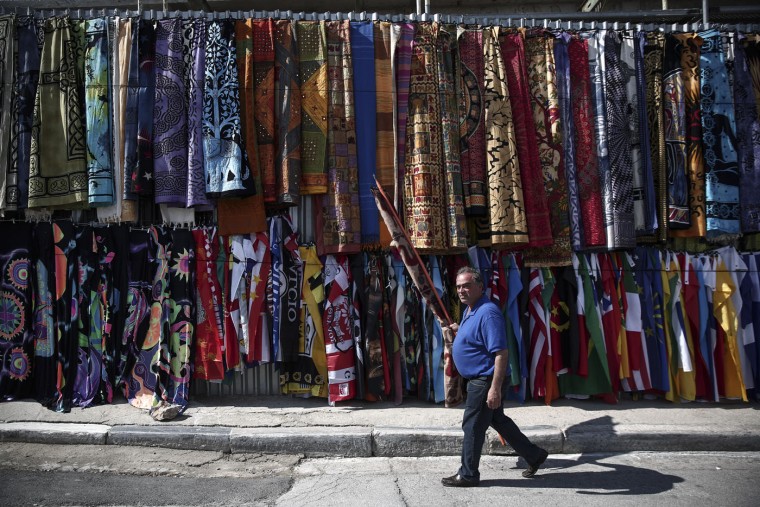 A man makes his way to hang a fabric outside his souvenir shop at Monastiraki tourist district in Athens, on Thursday, March 12, 2015. Talks between Greece and its creditors began in Brussels on Wednesday to cement a series of reforms Athens must implement in order to get the remaining bailout funds released and avoid bankruptcy. (AP Photo/Yorgos Karahalis) 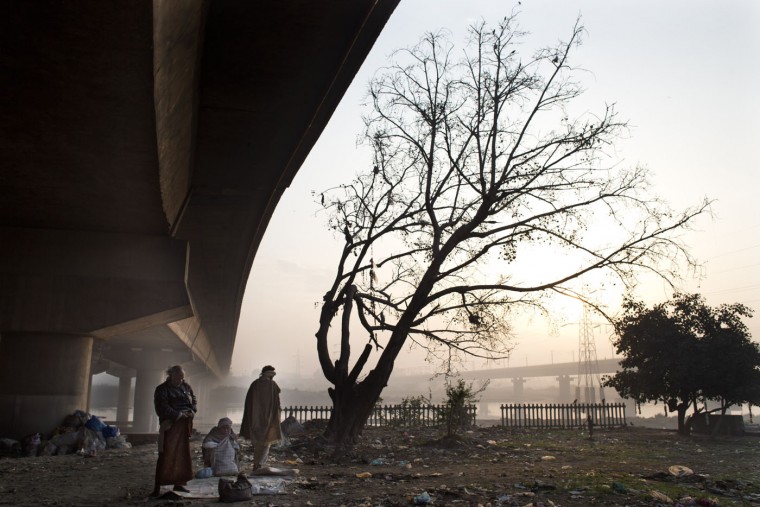 Homeless Indian men prepare themselves for the day ahead as they rise in the early morning near the banks of the River Yamuna, in New Delhi, India, Thursday, March 12, 2015. Some 800 million people in the country live in poverty, many of them migrating to big cities in search of a livelihood and often ending up on the streets. (AP Photo/Bernat Armangue) 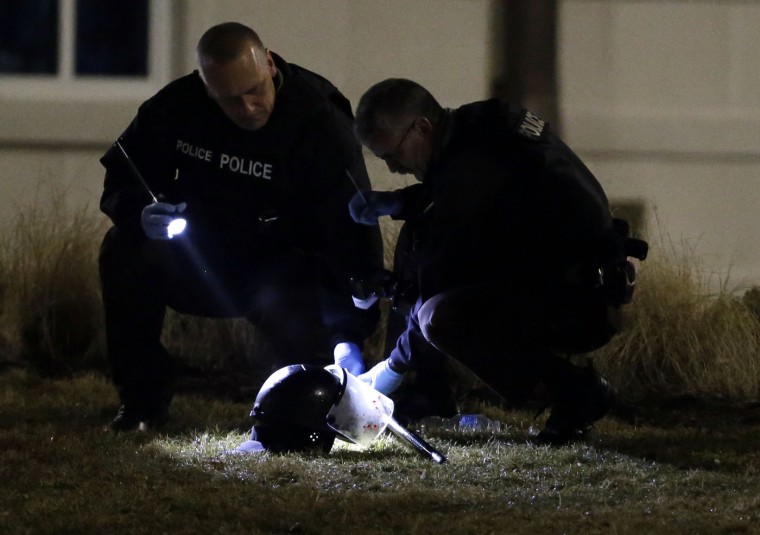 Police shine a light on a helmet as they investigate the scene where two police officers were shot outside the Ferguson Police Department Thursday, March 12, 2015, in Ferguson, Mo. (AP Photo/Jeff Roberson) 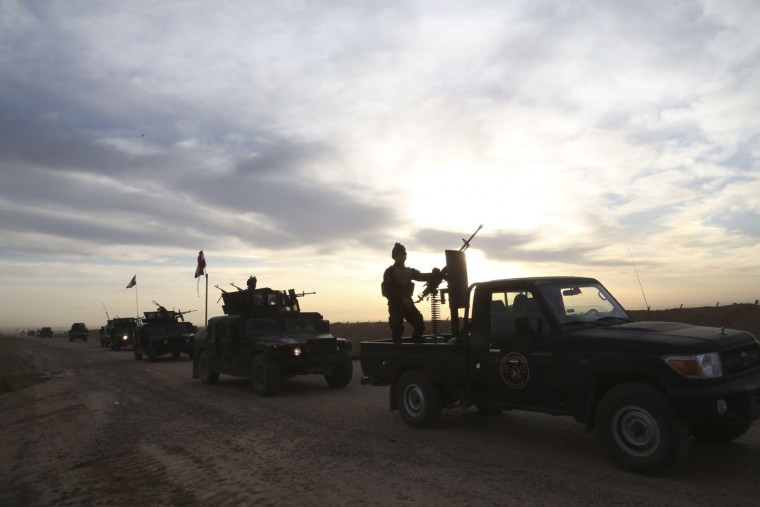 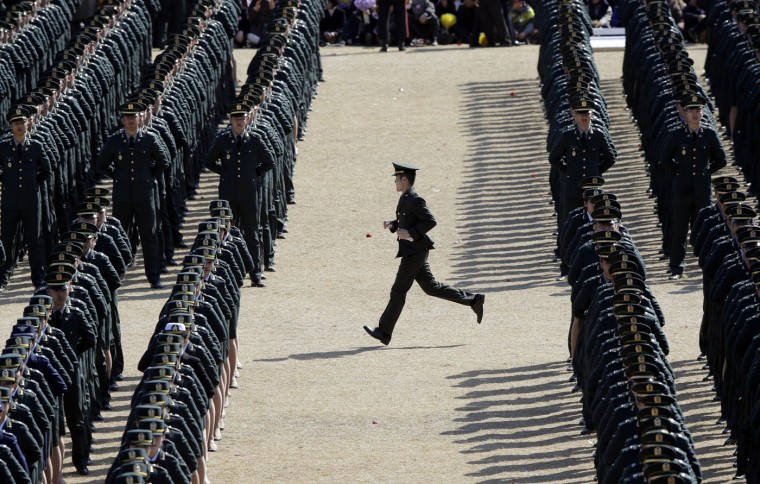 A South Korean military officer runs to his position during the joint commission ceremony of 6,478 new military officers of the army, navy, air force and marines at the military headquarters in Gyeryong, south of Seoul, South Korea, Thursday, March 12, 2015. (AP Photo/Lee Jin-man) 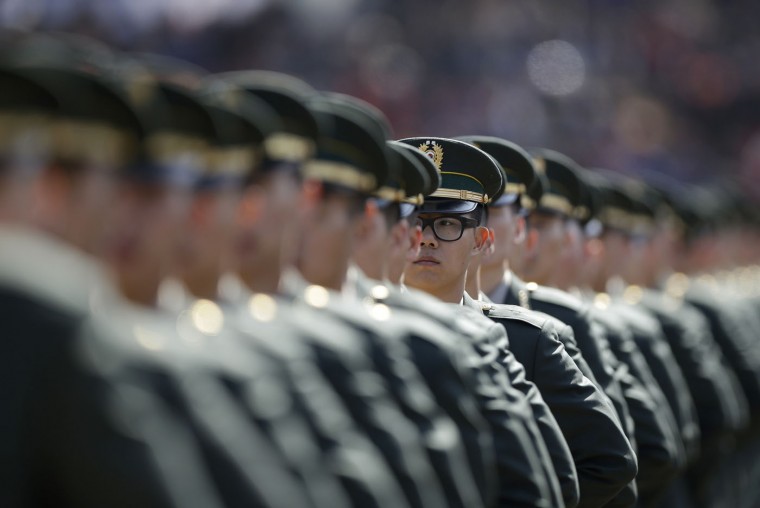 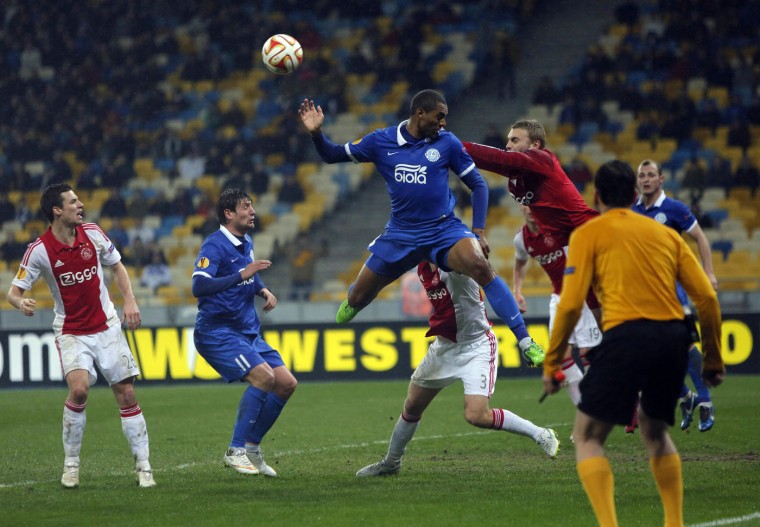 Ajax’s Joel Veltman, top right, challenges for the ball against Douglas, center, of Dnipro Dnipropetrovsk during a Europa League, round of 16 first leg soccer match between Dnipro Dnipropetrovsk and Ajax at the Olympiyskiy national stadium in Kiev, Ukraine, Thursday, March 12, 2015. (AP Photo/Sergei Chuzavkov) 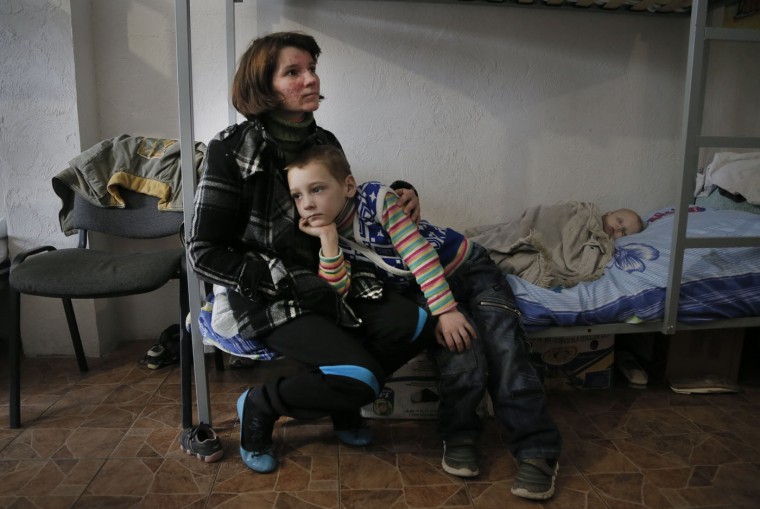 Natalya Barakhlenko and her sons, Anton, right, and Denis, who have fled their separatist-held hometown of Horlivka, sit in a hostel for the internally displaced in the government-controlled city of Slovyansk, Donetsk’ region, Ukraine, Thursday, March 12, 2015. Ukraines government reported in early March that there are almost 1.1 million registered internally displaced people across the country. (AP Photo/Efrem Lukatsky)