When he was a teenager, Len Pojunas Jr., now in his 60’s, and his brother were talking with their mother about how they wanted to know somebody in a famous battle.

Their mother, Bee, explained that their father was — serving as a Marine on Iwo Jima.

A glance through the World Book Encyclopedia showed a half-inch photo from the battle, which he showed to his father when he was home.

“Honest to God, he put his hand on his forehead. ‘That’s my troop,'” Pojunas Jr. recalled his father saying. The elder Pojunas then started naming some names and a life of research about that photo began. 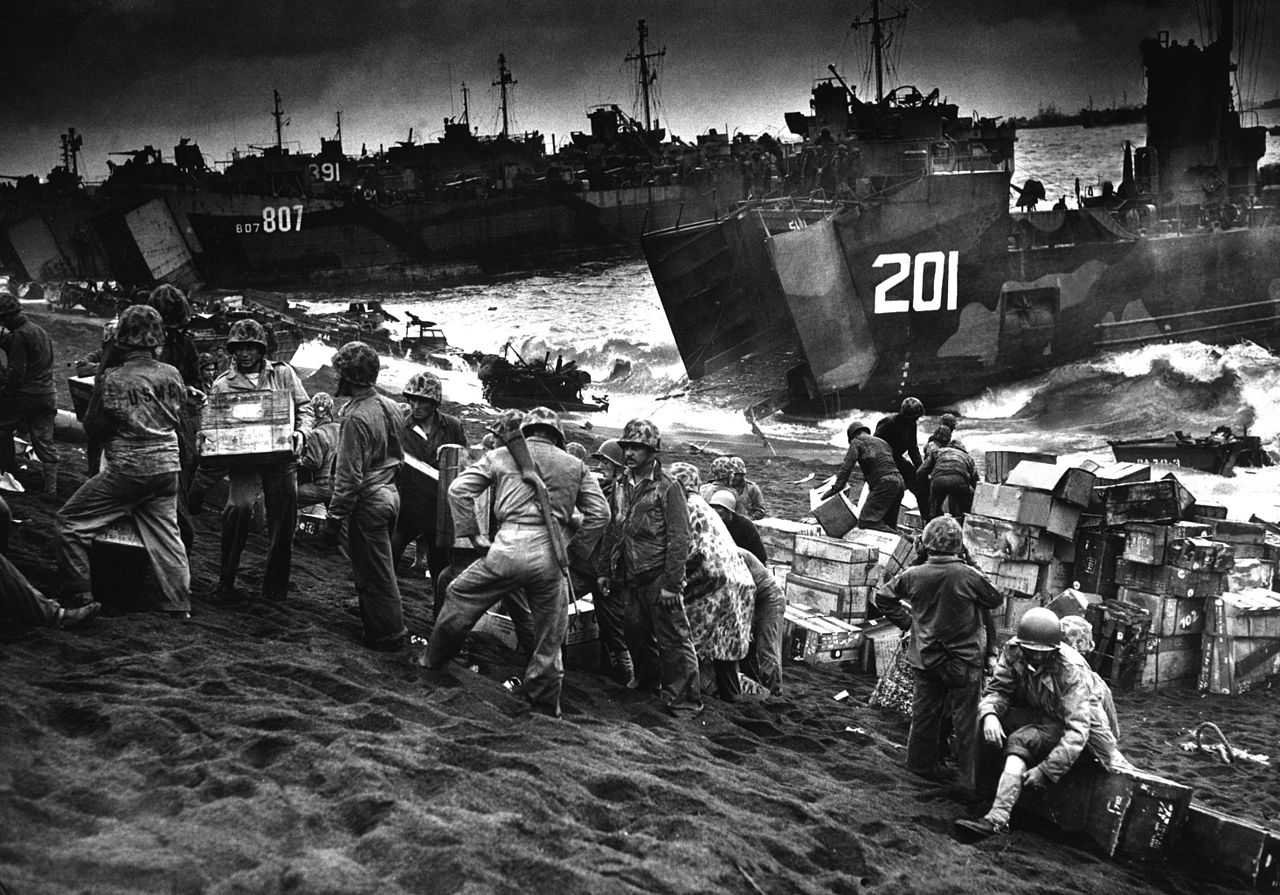 Two Marines, among eight others later identified, are: George “Frank” Hoyt, who was a police officer and union president of the Baltimore Police and Cpl. Leonard Pojunas, Sr., who spent his career in the Baltimore City School system, much as principal of Oliver H. Perry Elementary School.

Pojunas Sr. grew up in little Lithuania in South Baltimore and played football at Southern High School. He was a 6-foot, 240-lb. offensive and defensive lineman, the younger Pojunas recalled. 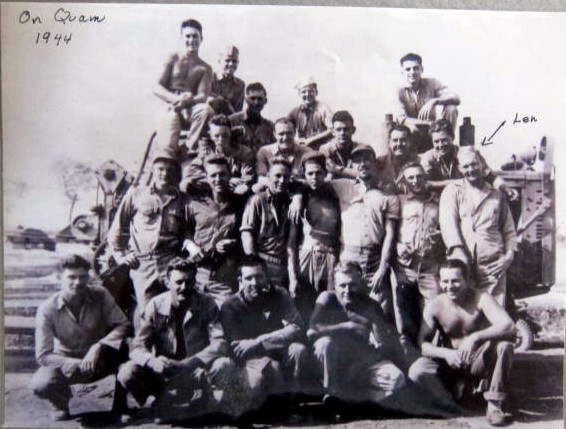 The Marine unit on Guam in 1944. They sailed from Guam to Iwo. As told by Len Pojunas Jr., “My dad is the tall Marine standing far right. Standing immediately to the left is Frank Hoyt. One more to the left looks like Martini, with the mustache. Then Hill and Jones appear (one with his cap brim turned up). The Marine, Hyatt, killed by the booby-trapped wooden box is there, but I don’t know which. “ 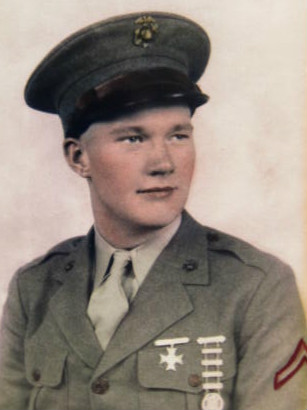 Leonard Pojunas after graduating USMC engineering school in Newport, RI., fall of 1943. He was 18. 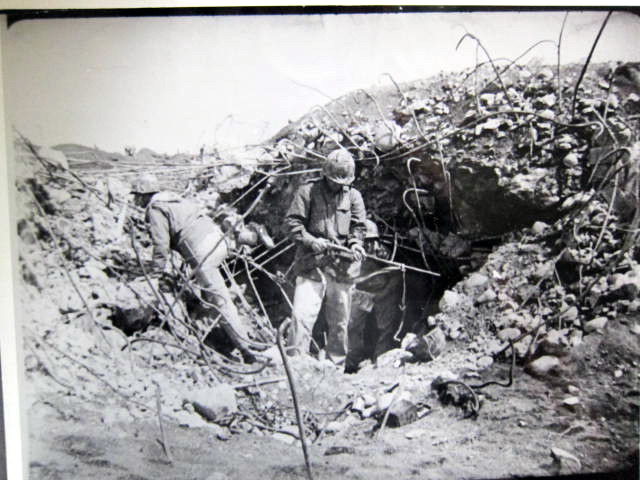 A still from a news clip, provided by Len Pojunas Jr. “As the announcer said, ‘Here, Marines inspect a Jap bunker.’ My dad’s on the left. Both are wearing chemical overalls against the rain. These overalls were shipped to Iwo, because the U.S. expected the Japanese to use chemical weapons. My dad and the other Marine (dad could not remember his name) both saw the clip later, back on Guam. My mom, Bee Pojunas, saw this clip back in the States.” 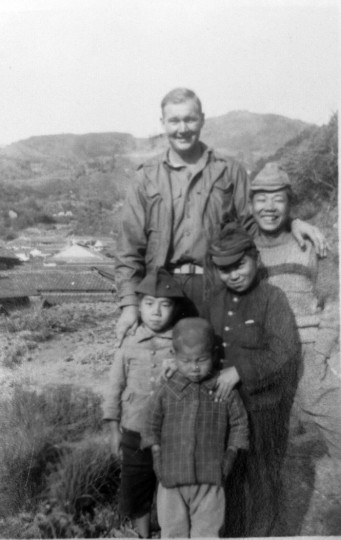 Cpl. Len Pojunas Sr. in Japan with Japanese school children. The two older children wear Japanese military kepis. The child to the left is wearing Pojunas’ Marine cap. As recalled by Pojunas Jr., “the oldest schoolboy asked if my father had killed his mother (my grandmother) to become a Marine. That was the belief among the Japanese.”

TIME ran the photo in the late 1970s. Pojunas Jr. wrote to them asking where he could get a print of it, which led him to the National Archives where he found the negatives and obtained a larger print of that photo he had found when he was just a teenager.

The print allowed Pojunas Jr. to draw a ‘key’ of the image in the early 1980’s as his father named the members of the 2nd Separate Engineer Battalion, Co. B — his father “had a great memory for details,” he said.

Pojunas Jr. used the Munster Rolls from the National Archives to verify and correct the spelling of some of the names his father had recalled. 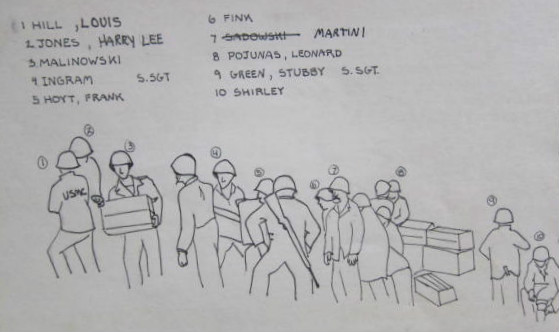 Pojunas Jr. recalls his parents saying Hoyt had been over for dinner a few times in the ’40s, and about 35 years later in the ’80s, the photograph reunited them.

“Another 35 years later, we think of them again,” Pojunas Jr. said.

As described in an archive caption based on the sketch and an interview with Pojunas Sr., with names corrected: “To the left, (beneath the “807”) balancing two wooden boxes is [Thadeus] Malkowski. Louis Hill, with “USMC” across his back, is to the left, and directly across from him is Harry Lee Jones. Nearer the surf is Staff Sgt. [Robert E.] Ingrahan lifting a box (seen as a white diagonal line). George “Frank” Hoyt is partially visible to the left of a carbine stock slung over the shoulder of an unknown Marine. To the right of the unknown Marine, is Fink, in profile. [Angelo] Martini, with the mustache, stands alert. The half-hidden face at the very end of the “bucket-brigade” is Cpl. Leonard W. Pojunas, Sr., just below the doors of the open LSM 201. Standing to the far right and facing away is Staff Sgt. [Samuel W.] Stubby Green. Sitting next to Green is [Cpl. Weldon] Shirley tightening his gaiter.”

The Pojunas’ had identified “Fink,” but did not find a Fink on the roster, thought there is a “Fitch.”

Another man ID’d from Iwo Jima was Merrill Hyatt, who was killed there, and is not seen in the photo.

The last time Len and his father spoke was about the photo he had discovered so many years ago.

The News American ran an article in 1975, “When The Flag Went Up On Mt. Suribachi,” written by William Stump, which recounted the experience of some of the men from Maryland on Iwo Jima.

A few of the men named in that piece are Dick Griffin, who in 1975 was a security guard at Sparrows Point who “remembers holes appearing suddenly along the side of a protecting cruiser” as he was aboard one of the sweepers, YMS 288, 50 yards from the beach and “somehow escaped being hit from the guns on the shore.”

Swinburn F. Straight was a crane millwright at the Point, and was in the first wave.

Jim Cunningham, “immersed in the polite world of financial public relations…flew a fighter off the dock of the new Hornet, and he bombed and strafed and napalmed the island.” The article also says another Baltimorean was in the same line of work — Bob Smith, a Hell Diver pilot aboard the Ticonderoga.

Frederick J. Fielder who worked for Maryland Casualty, had a paralyzed leg. He was on Iwo Jima for one hour. “He remembers the mortar shells walking down the beach in a precise row from north to south. I tried to dig in. There was stuff falling everywhere. And then I got hit.”

Dr. John Classen was “a prominent Baltimore surgeon” as of the 1975 article, then “a young Navy physician with the 3rd’s 21st. He lasted three days on Iwo: his aid station took a direct hit from what he calls a boogly woogly bomb.”

Leonard Pojunas is also mentioned in the piece with his recollection of the Japanese “coming out at night to seek water — there was none on the island — and caught one who thought the outfit’s diesel fuel was the precious stuff.”

Additional research from The Sun’s research librarian led to a photo from 1945 of one of the flags being raised atop Mount Suribachi. The original caption says “relatives of Lt. Walter Y. Brooks believe he is” in the photo, holding a rifle fourth from the right.