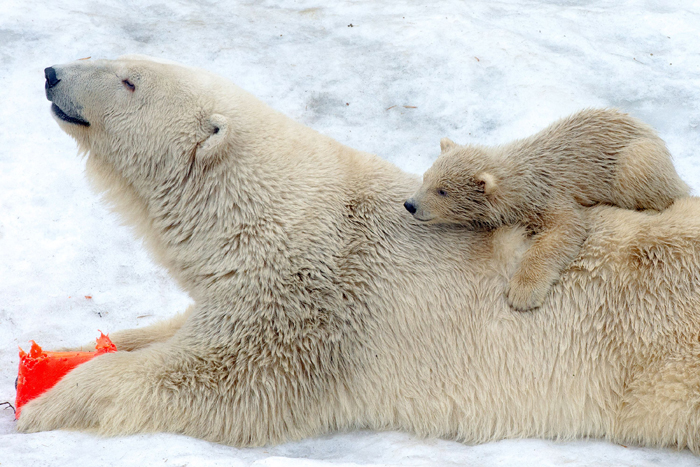 A polar bear cub rests on the back of his mother in their enclosure at Moscow’s zoo on Tuesday. (ALEXANDER UTKIN/AFP/Getty Images) 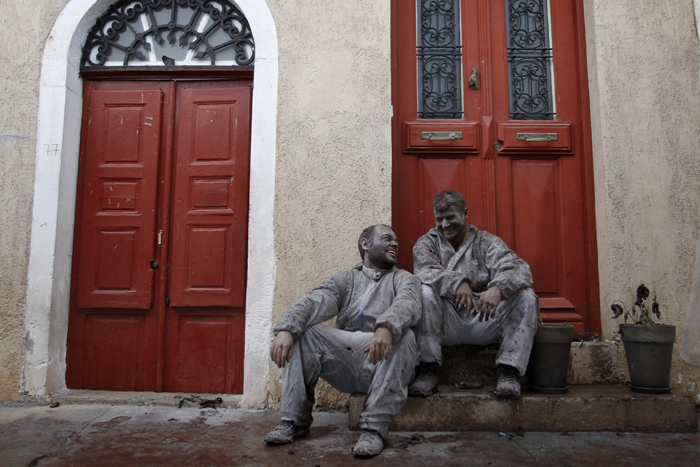 Revelers take a break as they celebrate Clean Monday with a flour war, a colorful flour fight marking the end of the carnival season in the port town of Galaxidi, some 120 miles west of Athens, on Monday. The flour fight, on the coastal road lining Galaxidis old harbor, takes place on Clean Monday, the beginning of the 40-day Christian Lent fast that ends on Easter Sunday. Although Clean Monday ceremonies abound across Greece, the most common being kite-flying, Galaxidis flour-fight is unique, and is thought to have been influenced by similar goings-on in Sicily in the 19th century. (Petros Giannakouris/AP) 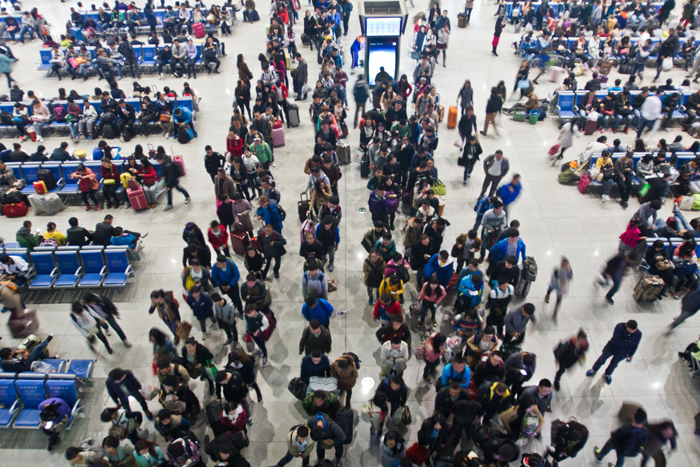 Passangers wait for their tains at Changchun Railway Station on Tuesday in Changchun, China. The number of travelers reaches a peak as people are returning to work after a week-long holiday. (ChinaFotoPress/Getty Images) 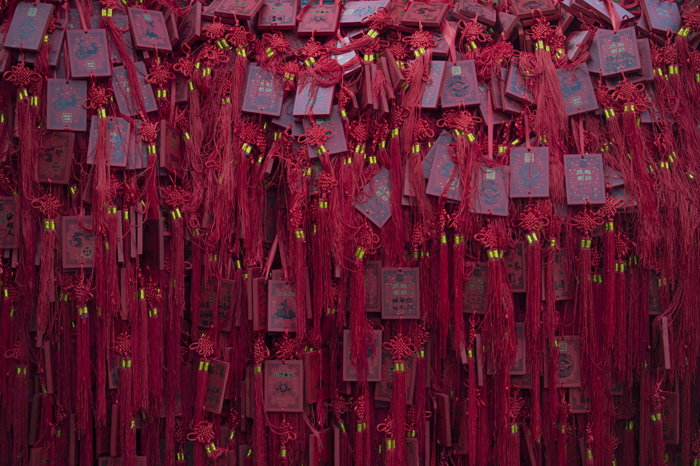 Chinese amulets are hung around a tree at Dongyue Temple Fair during Chinese Lunar New Year celebrations in Beijing on Tuesday. Millions of Chinese are celebrating the Spring Festival, the most important holiday on the Chinese calendar, which this year marks the beginning of the Year of the Sheep. (FRED DUFOUR/AFP/Getty Images) 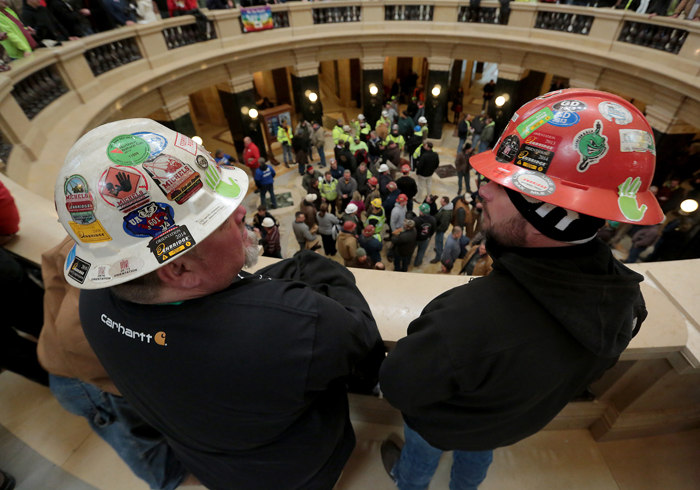 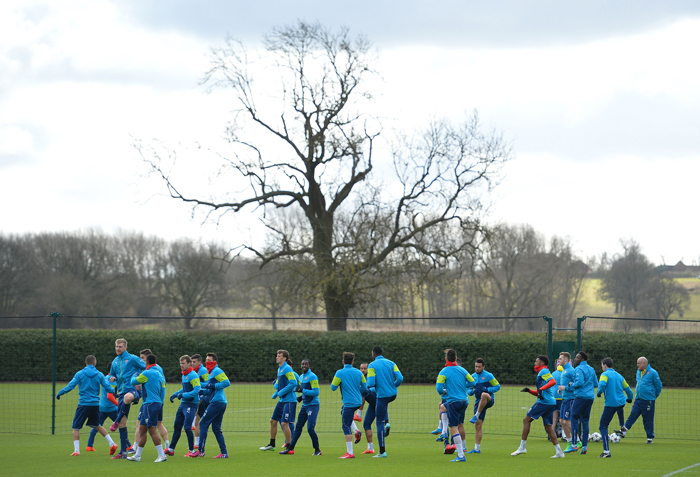 Arsenal’s players warm up as they attend a training session at Arsenal’s training ground in London Colney, north of London, England on Tuesday, ahead of the UEFA Champions League round of 16 first leg football match against AS Monaco on Wednesday in London. (GLYN KIRKGLYN KIRK/AFP/Getty Images) 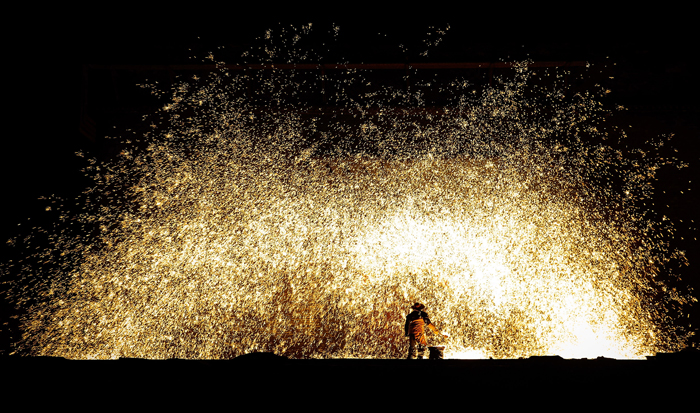 Chinese blacksmiths man a furnace as they prepare to throw the molten metal against a cold stone wall to create sparks on Monday in Nuanquan, Hebei Province, China. The throwing of ladles-full of molten iron against brick walls creates a shower of sparks that looks like fireworks. It has been a tradition in Nuanquan Town for over 300 years, and is believed to have come about because of the many blacksmiths of the town. (Lintao Zhang/Getty Images) 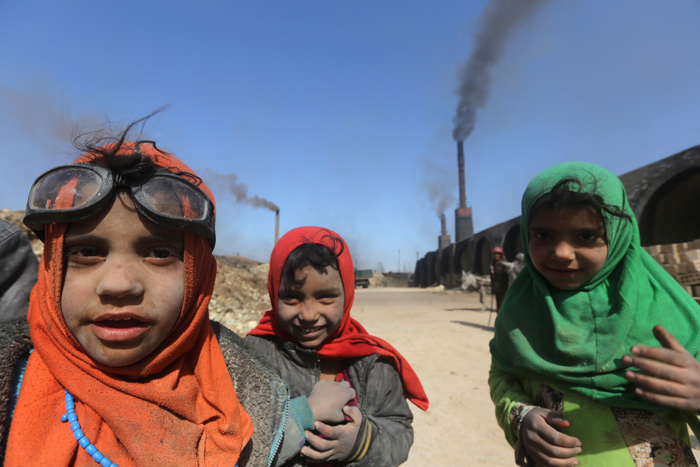 Iraqi children employed at the traditional brick factory of Nahrawan, one of the largest brick factories in Iraq, located on the eastern outskirts of the capital Baghdad, stand in front of kilns on Monday. (AHMAD AL-RUBAYE/AFP/Getty Images) 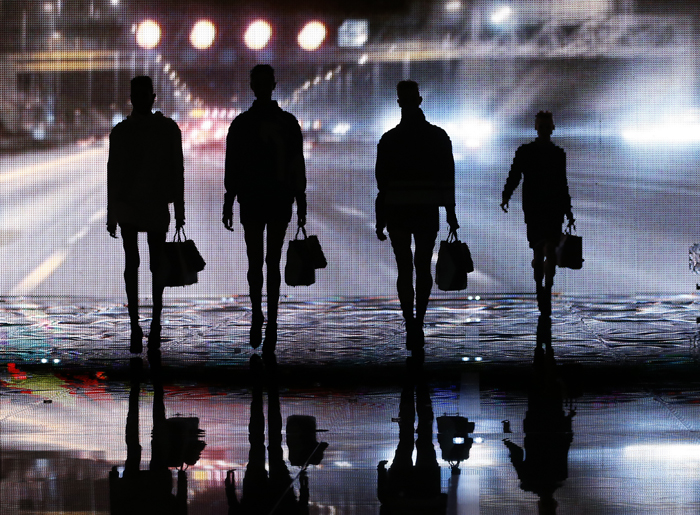 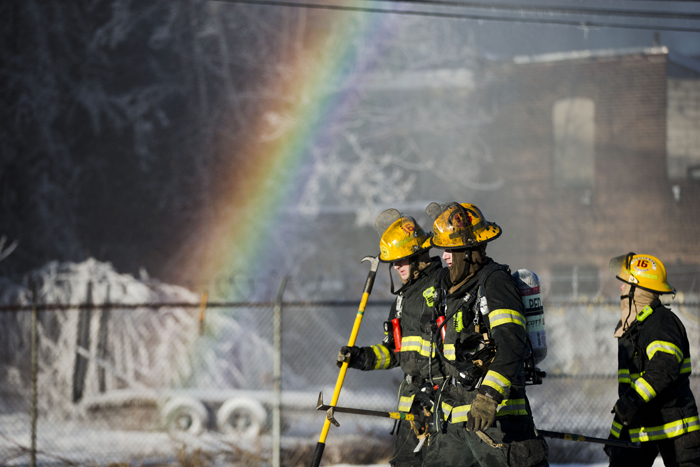 Firefighters walk past refracted light and a building covered in ice from their water canons as they battle a blaze, Tuesday in the Kensington neighborhood of Philadelphia. The fire started in a building housing retail shops. No injuries were reported. (Matt Rourke/AP) 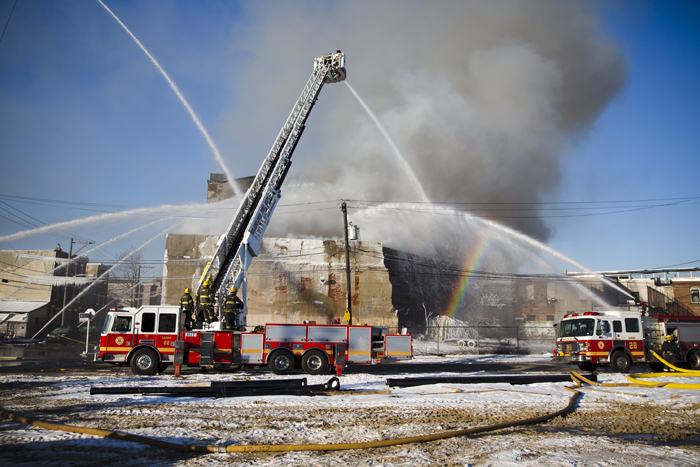 Firefighters battle a blaze Tuesday in the Kensington neighborhood of Philadelphia. The fire started in a building housing retail shops. No injuries were reported. (Matt Rourke/AP) 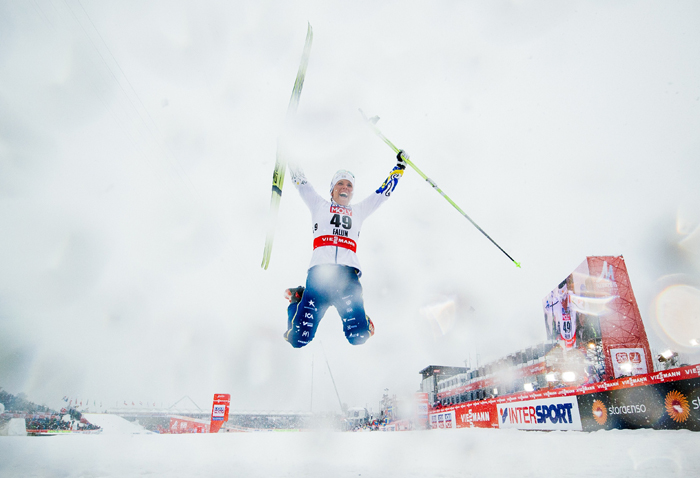 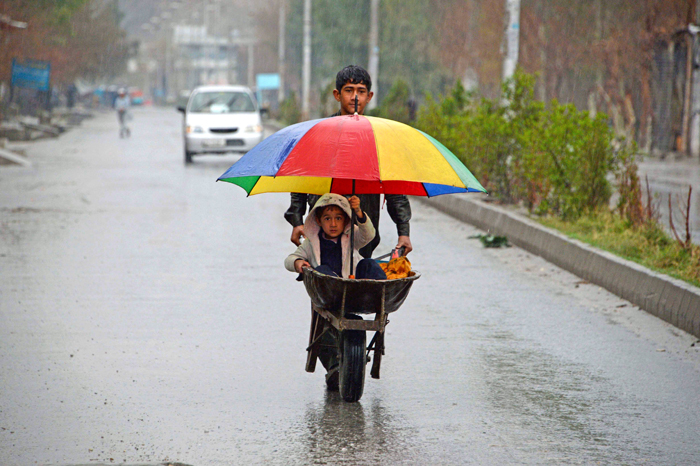 An Afghan boy pushes a wheelbarrow carrying his brother during a rainy day on the outskirts of Jalalabad on Tuesday. (Noorullah Shirzada/AFP/Getty Images)

Amid single-digit temperatures Tuesday morning, mist rises from Rouss Spring in Winchester, Va. as a rare visitor, a trumpeter swan, paddles around with Canada geese. The trumpeter swan was a regular visitor in colonial days, according to the Virginia Department of Game and Inland Fisheries, but is now the least common swan in Virginia. (Jeff Taylor/The Winchester Star/AP) 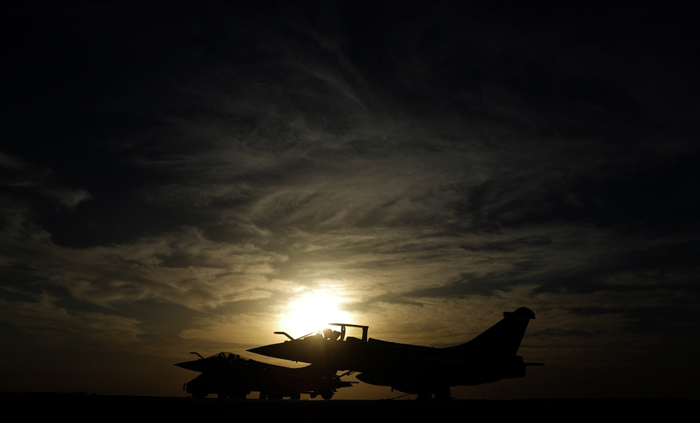 Rafale fighter jets sit on the deck of the French Navy aircraft carrier Charles de Gaulle operating in the Gulf at sunset on Tuesday. The French aircraft carrier, with 12 Rafale and nine Super Etendard fighters, will spend eight weeks in the Gulf working alongside the USS Carl Vinson, significantly increasing France’s regional air capabilities for operations against the Islamic State jihadist group that seized control of large parts of Syria and Iraq. (PATRICK BAZPATRICK BAZ/AFP/Getty Images) 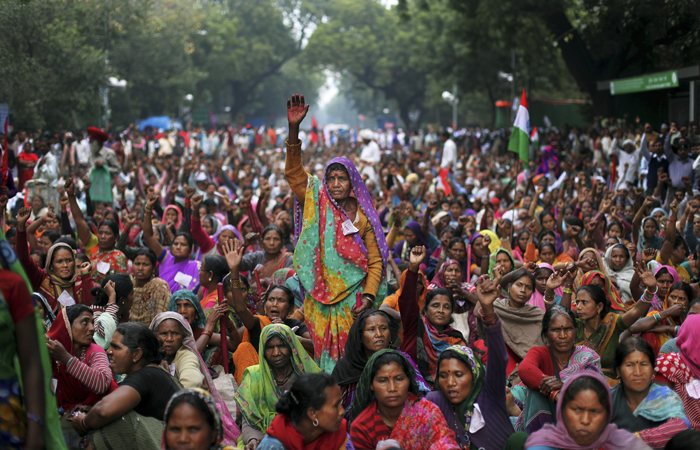 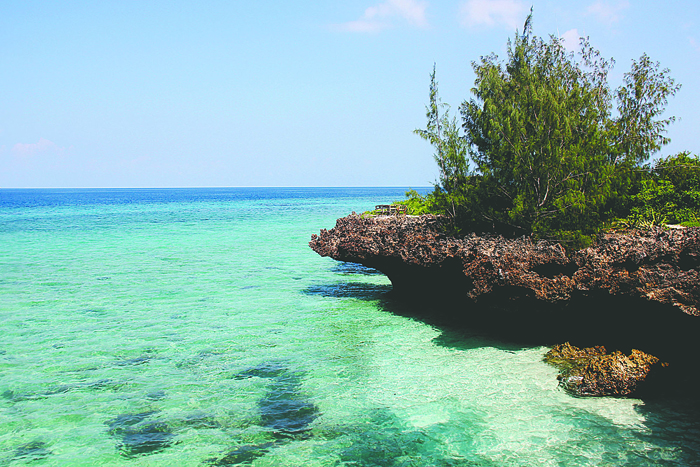 No more than 16 visitors are allowed at any time on Chumbe Island, off the coast of Tanzania. The tiny island is owned by a private nonprofit that uses tourism to support the protection of its spectacular reef, home to hundreds of fish and coral species. (Paige McClanahan for The Washington Post) 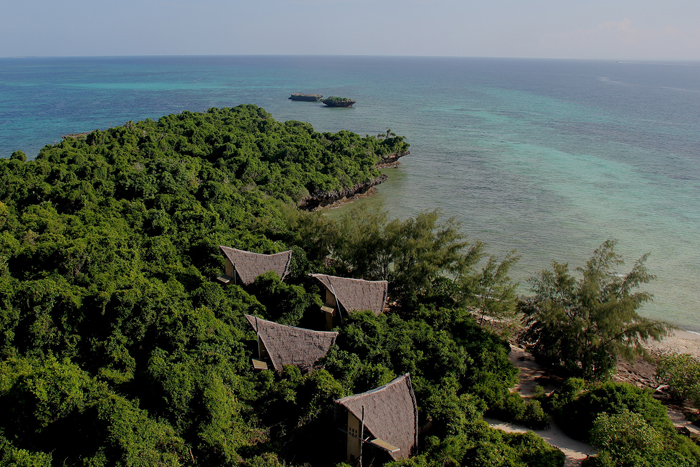 Seven eco-bungalows on Chumbe Island, off the coast of Tanzania, are designed to have minimal environmental impact. (Paige McClanahan for The Washington Post) 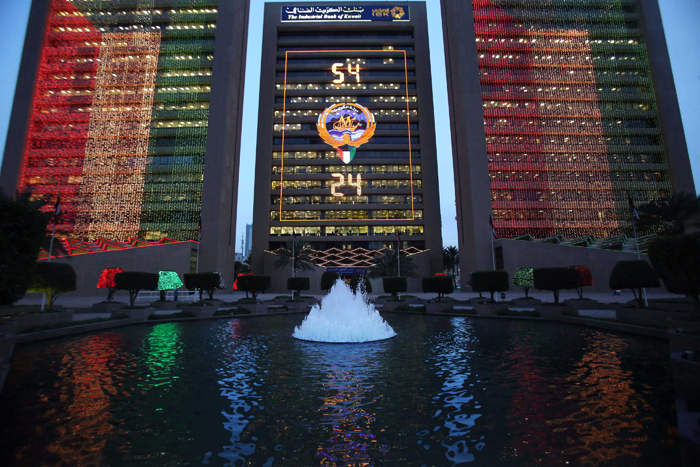 A picture taken on Tuesday shows Kuwait City’s banking complex decorated with lights in the colors of the national flag ahead of the celebrations marking the oil-rich Gulf emirate’s 54th National Day (on February 25) and the 24th Liberation Day (on February 26). The first date commemorates the creation of Kuwait as a nation in 1961 while Liberation Day marks the end of Iraq’s occupation in 1991. (YASSER AL-ZAYYAT/AFP/Getty Images) 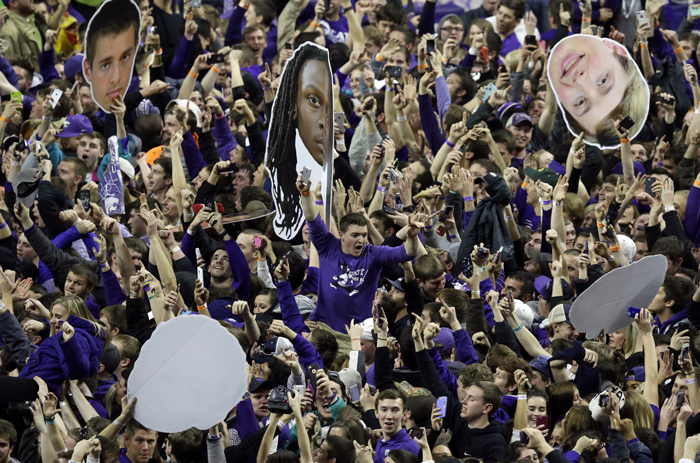 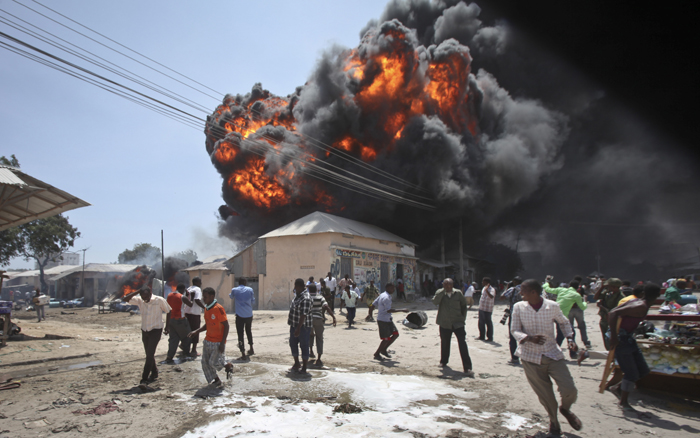 Somalis run from an explosion during a fire that engulfed a fuel market, causing extensive property damage but no loss of life, in the Hodan district of the capital Mogadishu on Monday. Mogadishu has a fire brigade but few firefighting vehicles, making it difficult to deal with such incidents in the city, which is still recovering from decades of war. (Farah Abdi Warsameh/AP) 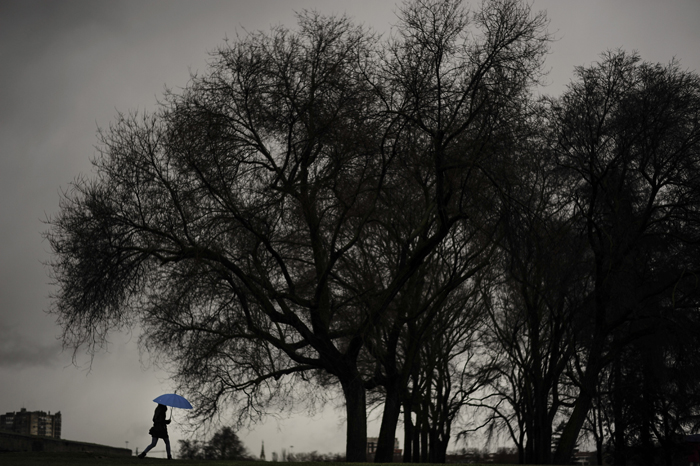 A woman shelters under an umbrella as the rain falls, in Pamplona northern Spain, Tuesday. Authorities have announced gale force winds in upcoming days of up to 62 miles per hour with rain and snow in north of the country. (Alvaro Barrientos/AP)