Matt Bracken 0 Comment From the Vault, The Baltimore Sun

Two loose llamas were lassoed after running amok in Sun City, Ariz., today, captivating Twitter and other social media platforms. But we’re no strangers to animals-on-the-run in Baltimore. In June 2014, a steer escaped from a Baltimore butcher, ran down North Ave. and was shot and killed by city police. In the pre-Twitter era, nine bison escaped from a Stevenson farm before being captured on a tennis court in Pikesville. 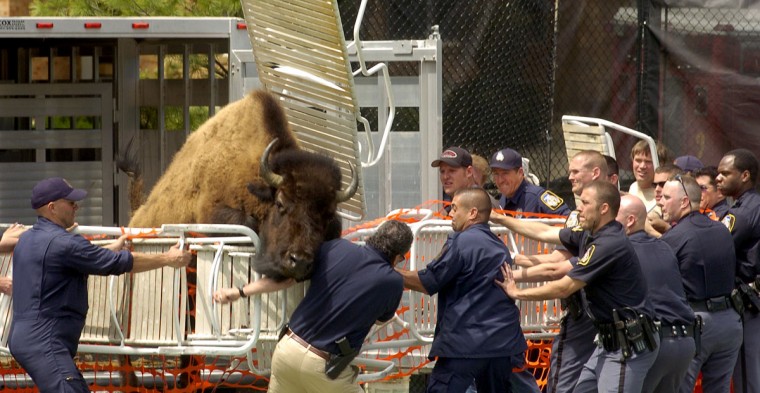 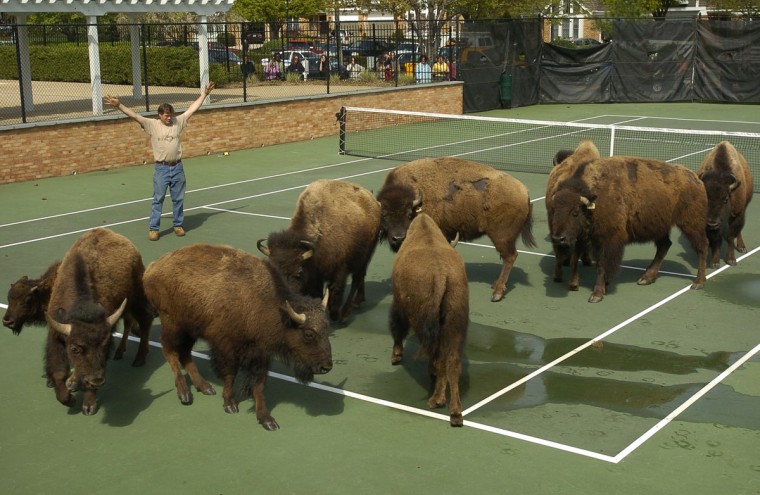 Nine bison escaped from a farm in Stevenson owned by Gerald “Buzz” Berg, and as they headed south toward the Beltway police were able to corral them into a fenced tennis court at the Greene Tree townhome complex, off Hooks Lane. (Amy Davis/Baltimore Sun) 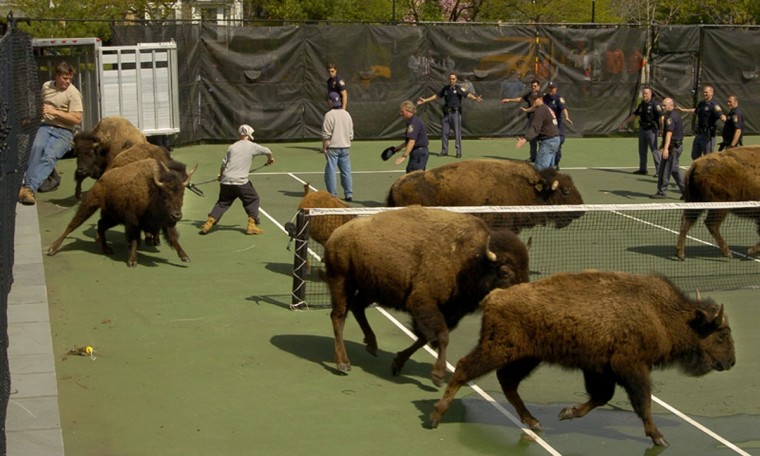 Baltimore County police try to corral the bison on the tennis courts at the Greene Tree gated community in Pikesville. (Amy Davis/Baltimore Sun) 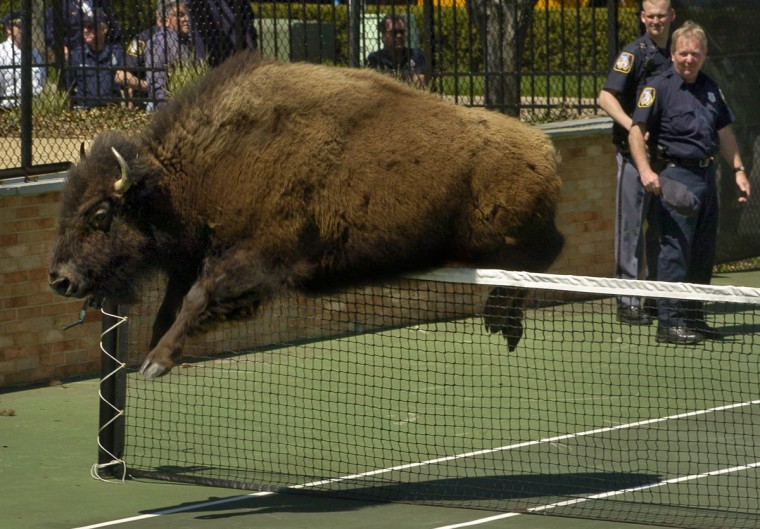 A bison jumps the net on the tennis courts at Greene Tree community in Pikesville. (Amy Davis/Baltimore Sun) 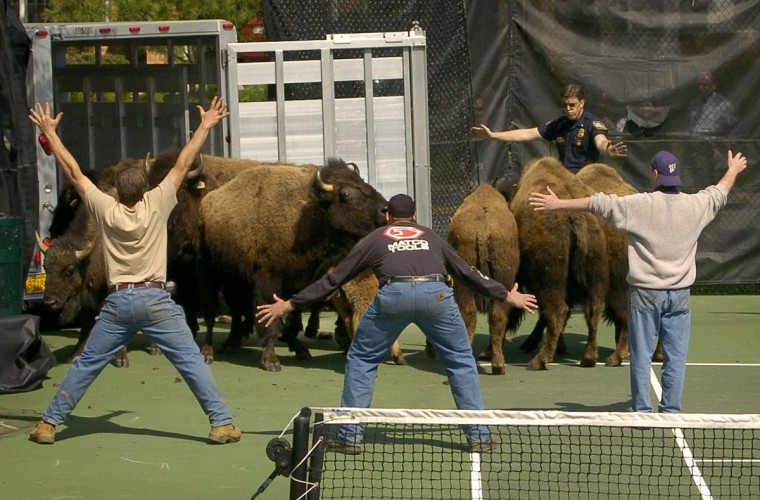 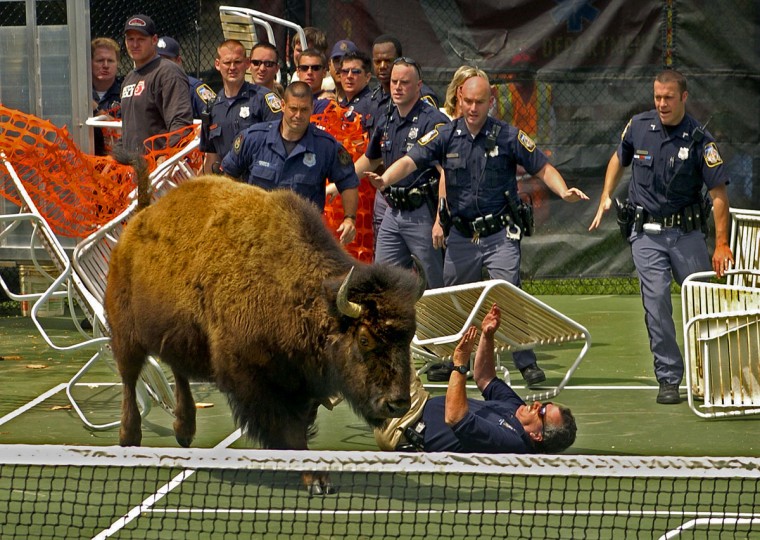 After herding nine escaped bison onto a tennis court, the challenge continued for Baltimore County police. The last bison they were attempting to herd into a truck broke free, trampling a makeshift barrier of lawn chairs and netting, and knocking down a police officer. (Amy Davis / Baltimore Sun)

A police roundup of wayward American bison might be worthy of headlines from coast-to-coast and video for the networks.

But for the officers whose beats include the winding roads and working farms of rural Baltimore County, corralling livestock is more often just another call on another day on the job.

From time to time, horses, cows, pigs step off the farm, and police step in.

“Loose cattle, loose horse calls. Usually it’s one or two stragglers,” Capt. Charles Rapp said yesterday, after he and his fellow officers at the county’s Franklin precinct received some words of thanks from the county executive and their chief for capturing the bison. “Cows aren’t too bad. They’re more used to being herded.”

At the Franklin precinct, which stretches from Pikesville and the Greenspring Valley to the wide open lands north of Reisterstown, they can expect at least one call to help with animals (livestock or pet problems) every couple of weeks, said Lt. Dave Folderauer.

Bison? A little more exotic than the usual fare, but the mind-set is the same.

“We were the ones on duty,” said Folderauer, who explained the force’s response in a series of interviews yesterday on network morning shows. “The 911 call came in, and we responded.”

Closing roads when needed or even getting hands-on, as in the bison chase, is part of the department’s duty to protect public safety, Baltimore County Police Chief Terrence B. Sheridan said yesterday.

“As humorous as it is in many respects, it’s also pretty serious,” County Executive James T. Smith Jr. told the troops yesterday. “It was a dangerous situation.”

The danger comes when animals dart into traffic, creating the potential for a car crash.

Using firearms was not ruled out as an option on Tuesday, Folderauer said, adding that if the bison had made it to the Beltway officers “would have had to destroy them.”

The nine bison posed an unusual risk because of their number and their size. Mike Cranfield, director of animal management at the Maryland Zoo in Baltimore, was on hand with tranquilizers once the animals had been corralled onto the tennis court of a townhouse complex.

But using the tranquilizers, he said, was a last resort, because moving the sedated, heavy animals would present another challenge.

No injuries were reported, although one bison knocked a county police officer down.

No charges for owner

They also said he would not have to pay – at least this time – for the cost of the operation.

“In this case, clearly they just knocked down the gate they were in and went for a walk,” Sheridan said.

Attempts to reach Berg for comment yesterday were unsuccessful. On Tuesday, as his bison were being captured, he said that they were likely headed for a trip to the slaughterhouse.

Folderauer described some other unusual animal-related calls from his law enforcement career. There was, he said, a wallaby hopping in the streets of Owings Mills, and a runaway emu in Catonsville.

Rapp is now the commander of the Franklin precinct, but one of his previous assignments was at the Cockeysville precinct, which reaches to the farmlands of northern Baltimore County.

There, he said, he once was summoned to chase llamas.

“That was a problem,” he said, “because llamas spit at you.”