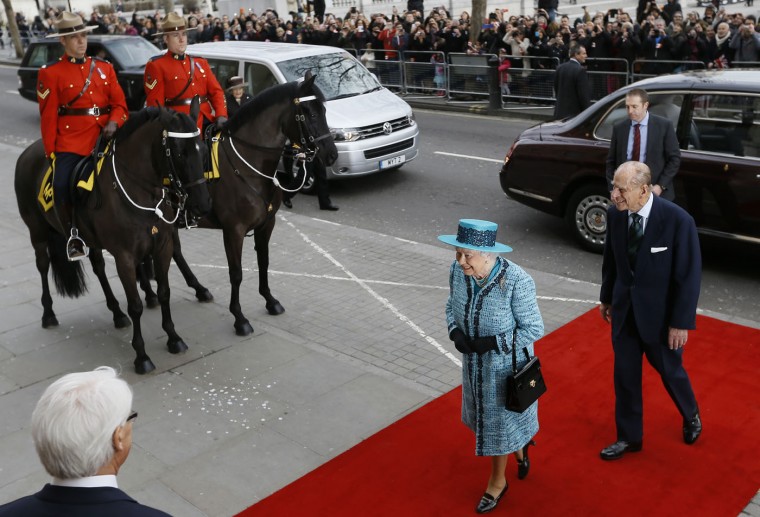 Britain’s Queen Elizabeth II and Prince Philip, the Duke of Edinburgh arrive to officially reopen Canada House following an extensive programme of restoration and refurbishment, on Trafalgar Square in London, Thursday, Feb. 19, 2015. Canada House is the official home to the Canadian High Commission in the United Kingdom. The building was first opened in 1925 by King George V. (Kirsty Wigglesworth/AP Photo/Pool) 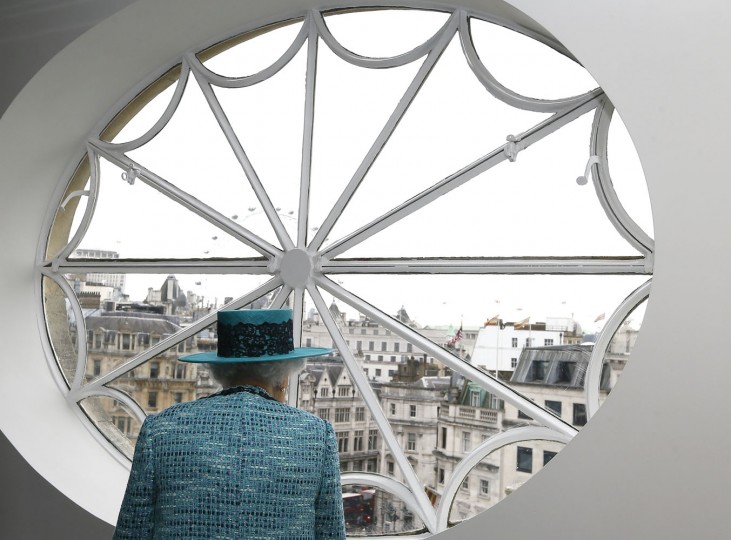 Britain’s Queen Elizabeth II looks at the view out of a window, during a visit to reopen Canada House, following an extensive programme of restoration and refurbishment, in London, Thursday, Feb. 19, 2015. Canada House is the official home to the Canadian High Commission in the United Kingdom. The building was first opened in 1925 by King George V. (Kirsty Wigglesworth/AP Photo/Pool) 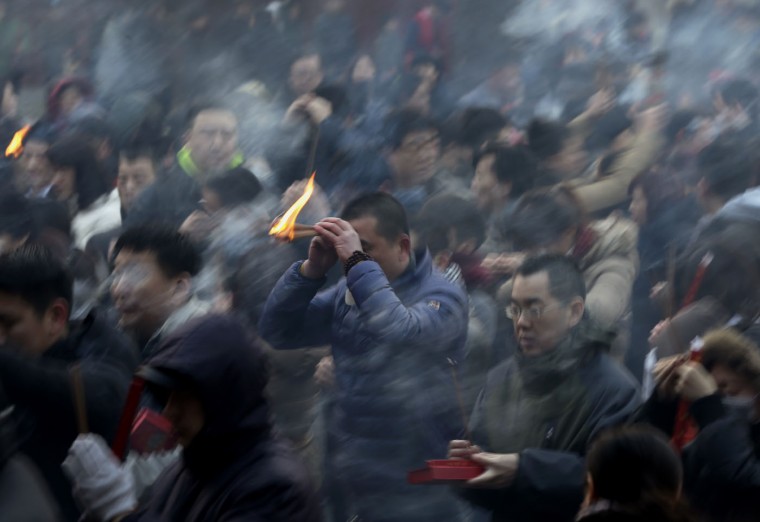 A man holds burning incense as he offers prayers on the first day of the Chinese Lunar New Year at Yonghegong Lama Temple in Beijing, China Thursday, Feb. 19, 2015. Chinese people are celebrating the arrival of the Lunar New Year, the Year of the Sheep. (Andy Wong/AP Photo) 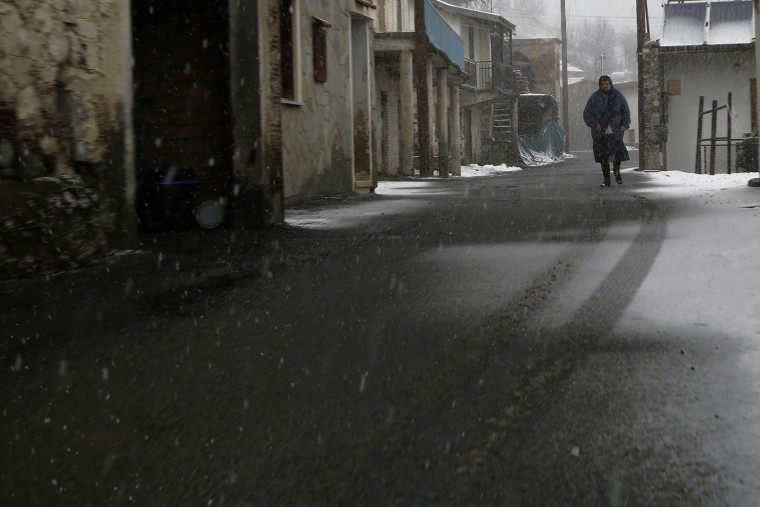 An elderly woman walks during a snowfall in Kiperounta village on Troodos mountains, Cyprus, Thursday, Feb. 19, 2015. The cold front brought unseasonably cold temperatures and plenty of snow on Cyprus Troodos mountain range. Schools were closed in many small mountain villages and communities as a result of the snowfall that made roads treacherous. Even the capital Nicosia saw rare snow flurries. Temperatures are forecast to rise over the weekend. (Petros Karadjias/AP Photo) 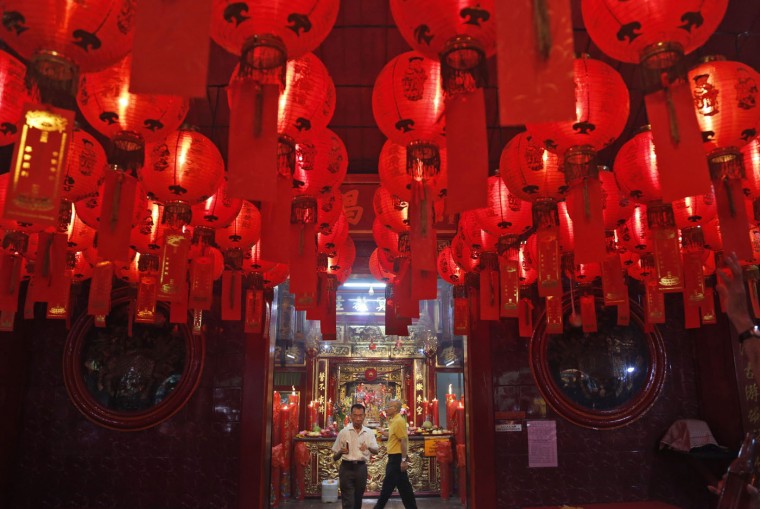 Indonesians of Chinese descent attend a prayer during Chinese New Year celebration at Dharma Sakti temple at the China Town in Jakarta, Indonesia, Thursday, Feb. 19, 2015. Ethnic Chinese in the world’s most populous Muslim country are celebrating the start of the year of the sheep. (Dita Alangkara/AP Photo) 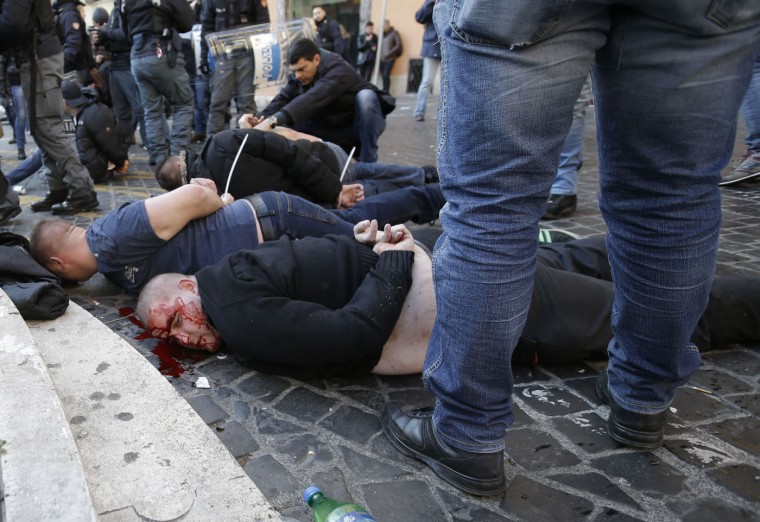 An injured Feyenoord’s fan lies on the ground after being arrested with others during clashes occurred with Italian Policemen at the Spanish steps prior to the start of the Europa League soccer match between Roma and Feyenoord in Rome, Thursday, Feb. 19, 2015. (Gregorio Borgia/AP Photo) 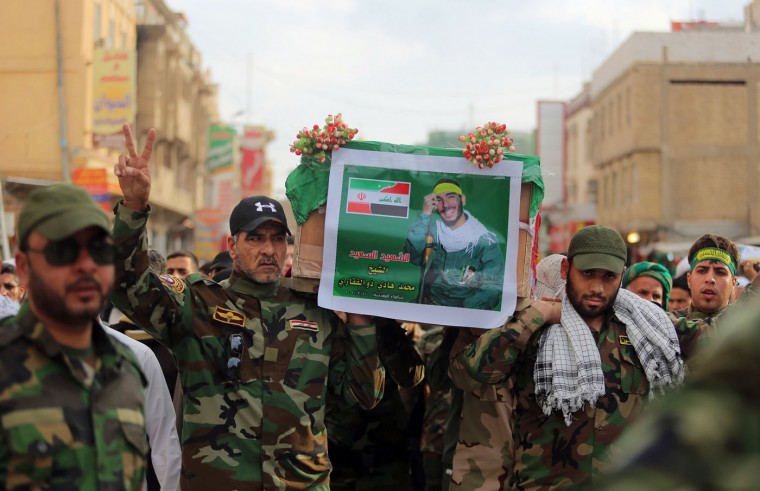 Iraqi and Iranian Shiite militiamen carry the coffin draped with Iranian flag during a funeral procession for Mohammad Hadi Zulfiqar, in the poster, an Iranian volunteer fighting in the Badr Brigades Shiite militia, in Najaf, 100 miles (160 kilometers) south of Baghdad, Iraq, Thursday, Feb. 19, 2015. Zulfiqar was killed during a battle against the Islamic State extremist group in Samarra, a town north of Baghdad that is home to a major Shiite shrine. (Jaber al-Helo/AP Photo) 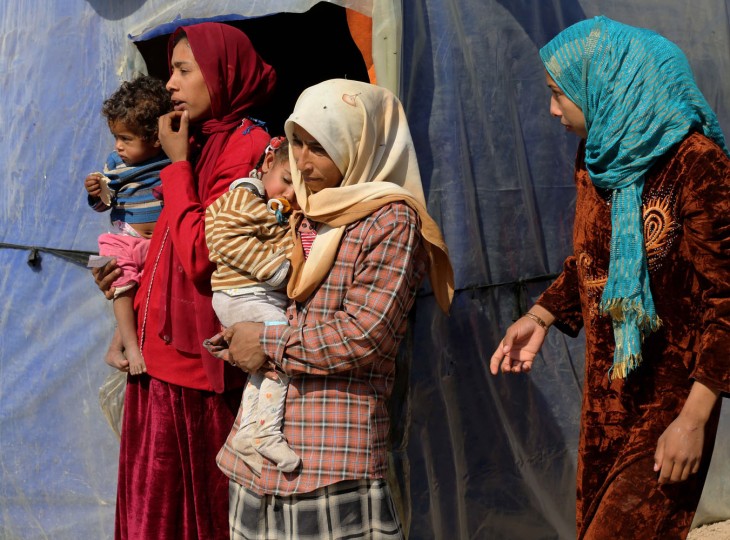 An Iraqi woman, who fled her town after the advance of Islamic militants, holds a child at a camp for displaced Iraqis outside Baghdad, Iraq, Thursday, Feb. 19, 2015. (Karim Kadim/AP Photo) 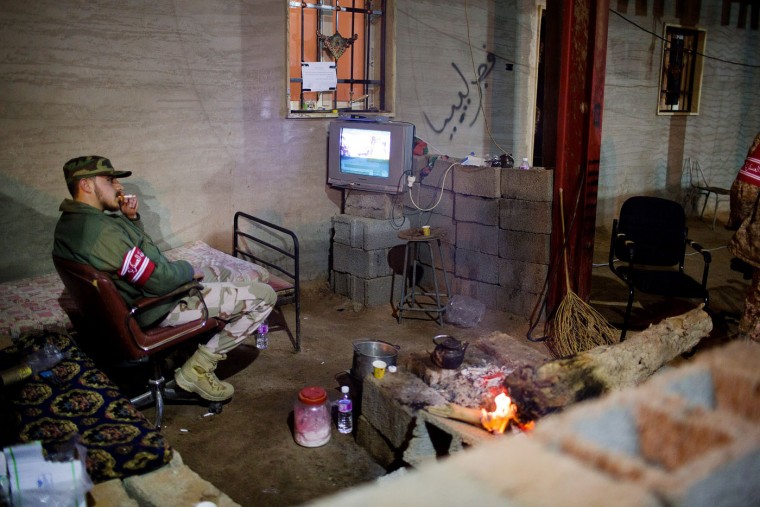 In this Wednesday, Feb. 18, 2015 photo, a Libyan military soldier smokes his cigarette as he watches the news during his break, 110 kilometers (68 miles) from Sirte, Libya. (Mohamed Ben Khalifa/AP Photo) 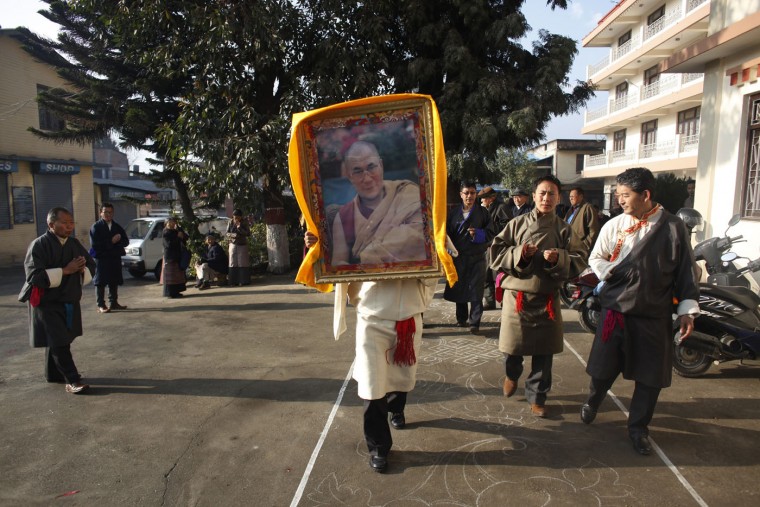 A Tibetan man carries a portrait of spiritual leader the Dalai Lama during Tibetan New Year, or Losar, inside the Tibetan Refugee Camp in Lalitpur, Nepal, Thursday, Feb. 19, 2015. Tibetans across the world marked the arrival of the New Year with prayers and festivities. (Niranjan Shrestha/AP Photo) 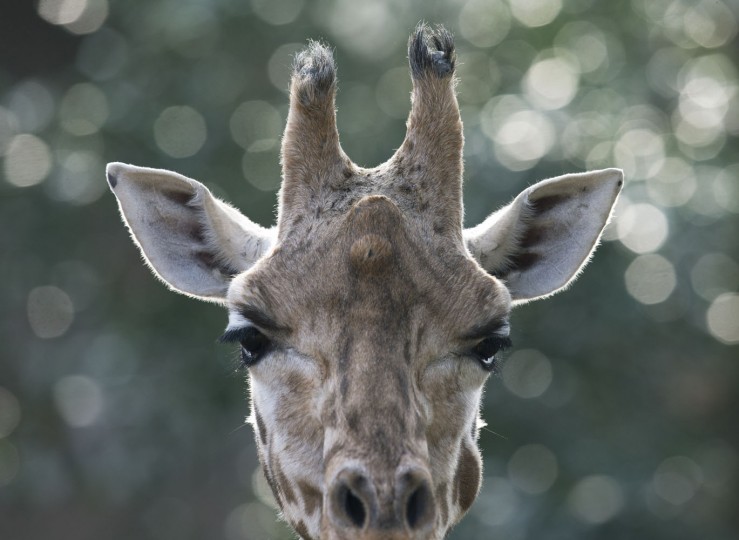 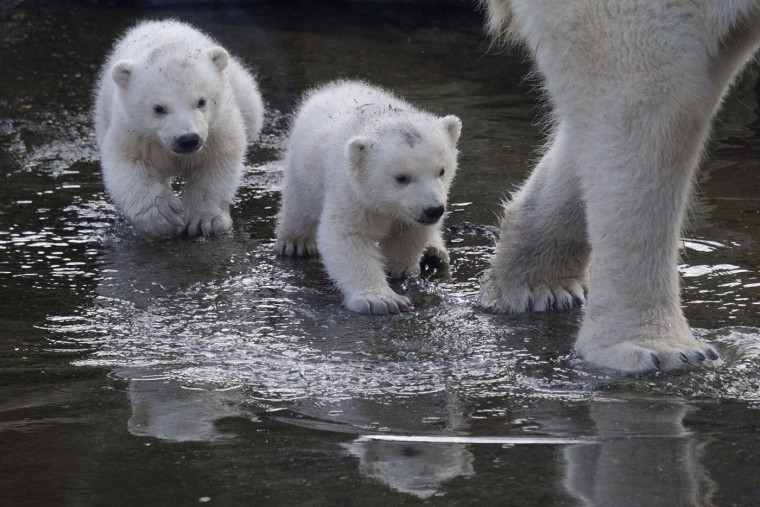 Two polar bear cubs follow their mother as they venture outside their enclosures for the first time since they were born at Ouwehands Zoo in Rhenen, Netherlands, Thursday, Feb. 19, 2015. Three cubs were born Nov. 22, 2014 but one of the triplets died soon after birth, the cub’s mother and grandmother live at the zoo, their father now lives at the Yorkshire Wildlife Park in England. (Peter Dejong/AP Photo) 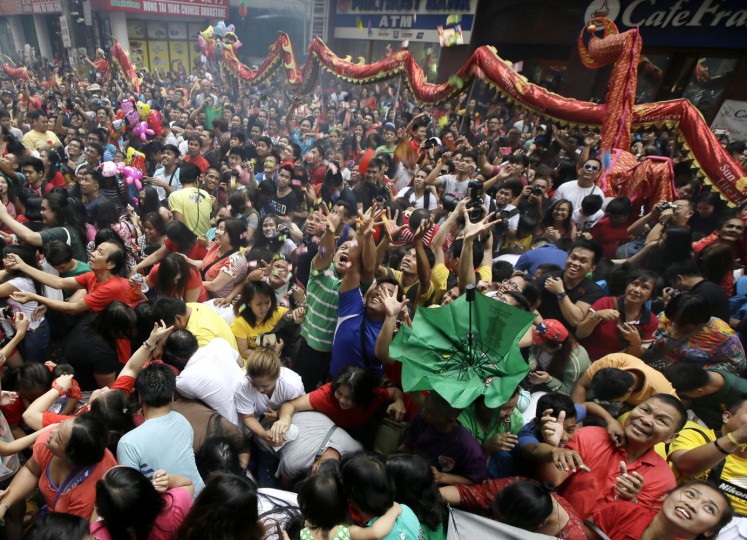 Crowd catch sweets and giveaways being thrown at them following dragon and lion dances performed in front of a supermarket at Manila’s Chinatown district of Binondo to celebrate the Chinese New Year Thursday, Feb. 19, 2015, Philippines. This year marks the “Year of the Sheep” in the Chinese Lunar calendar. (Bullit Marquez/AP Photo) 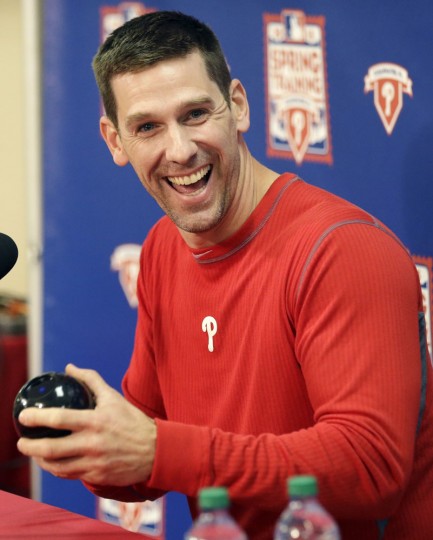 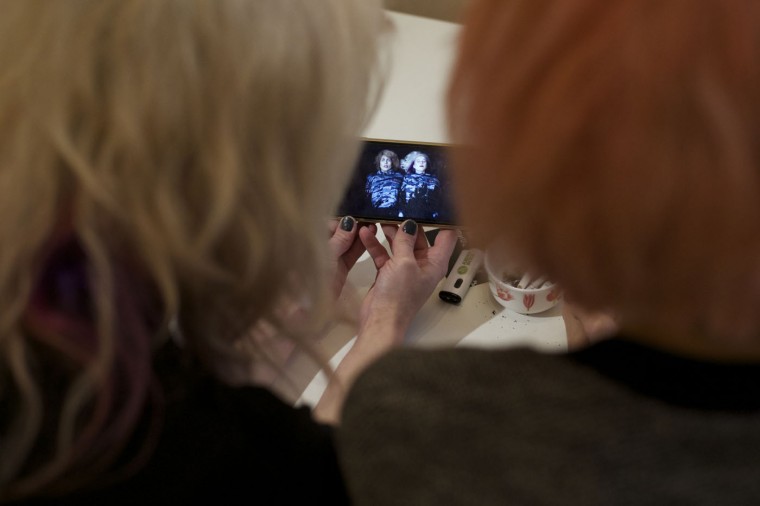 Two members of the punk provocateur band Pussy Riot Maria Alekhina, left, and Nadezhda Tolokonnikova watch their music video on a phone during an interview with The Associated Press in Moscow, Russia, Thursday, Feb. 19, 2015. Two members of the punk provocateur band Pussy Riot have released a new music video dedicated to Eric Garner, an unarmed man who was killed when a New York City police officer put him in a fatal chokehold. In the video the are dressed in Russian riot police uniforms and shown buried alive. The song is titled “I Can’t Breathe,” the last words of Eric Garner captured on video by a bystander. (Ivan Sekretarev/AP Photo) 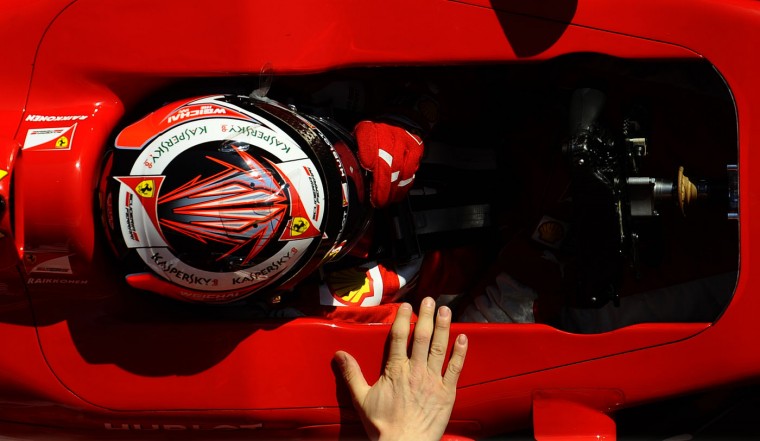 Kimi Raikkonen of Finland and Ferrari is pulled by technicians to the garage during the 2015 Formula One testing at the Barcelona Catalunya racetrack in Montmelo, Spain, Thursday, Feb. 19, 2015. (Manu Fernandez/AP Photo)

Germany’s Severin Freund is reflected as he jumps during a training session for the Ski Jumping event at the Nordic Skiing World Championships in Falun, Sweden, Thursday, Feb. 19, 2015. (Matthias Schrader/AP Photo) 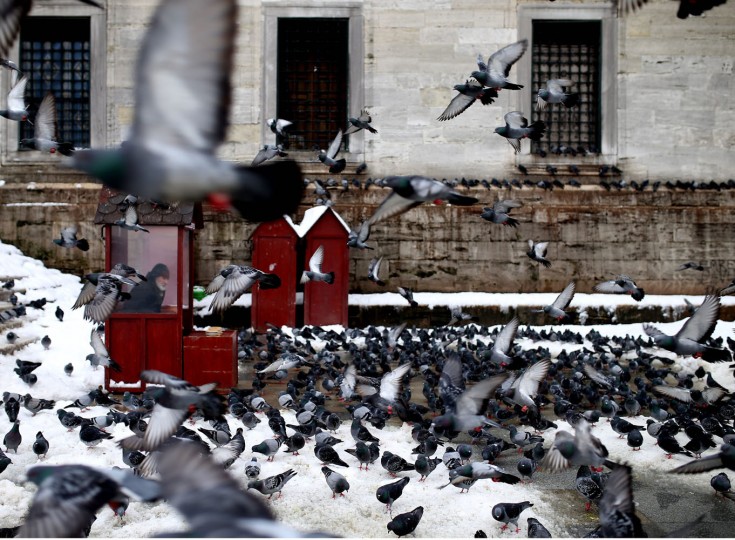 A man selling food for pigeons sits in a cubicle, near Yeni Cami, in Istanbul, Turkey, Thursday, Feb. 19, 2015. Turkey’s largest city, Istanbul, has been hit by a storm that has dumped up to a 60 centimetres (24 inches) of snow in some areas since Tuesday, wreaking havoc on roads. (Emrah Gurel/AP Photo) 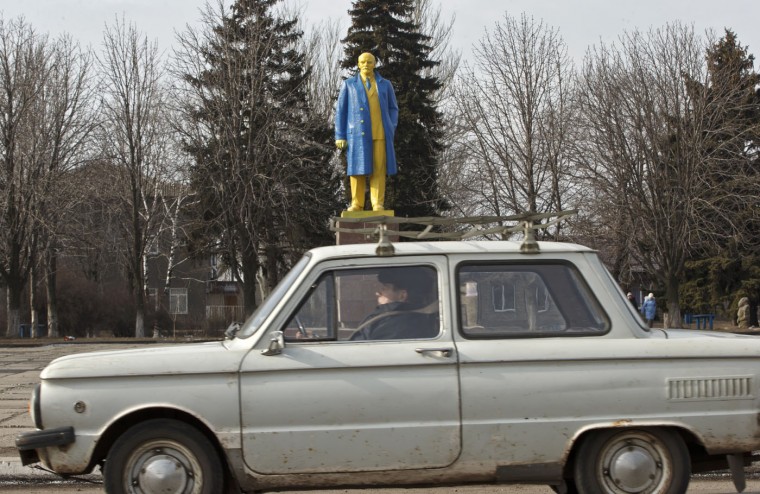 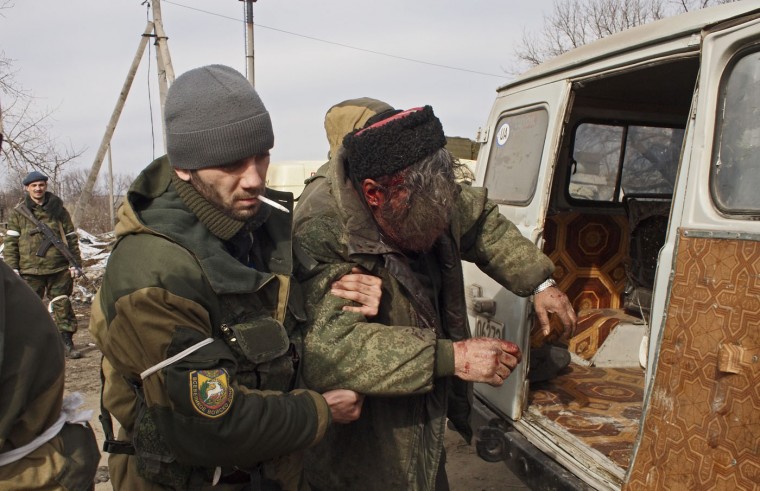 A wounded Cossack is carried away by fellow fighters after his car hit a land mine in the east Ukraine town of Debaltseve on Thursday, Feb. 19, 2015. After weeks of relentless fighting, the embattled Ukrainian rail hub of Debaltseve fell Wednesday to Russia-backed separatists, who hoisted a flag in triumph over the town. The Ukrainian president confirmed that he had ordered troops to pull out and the rebels reported taking hundreds of soldiers captive. (Peter Leonard/AP Photo) 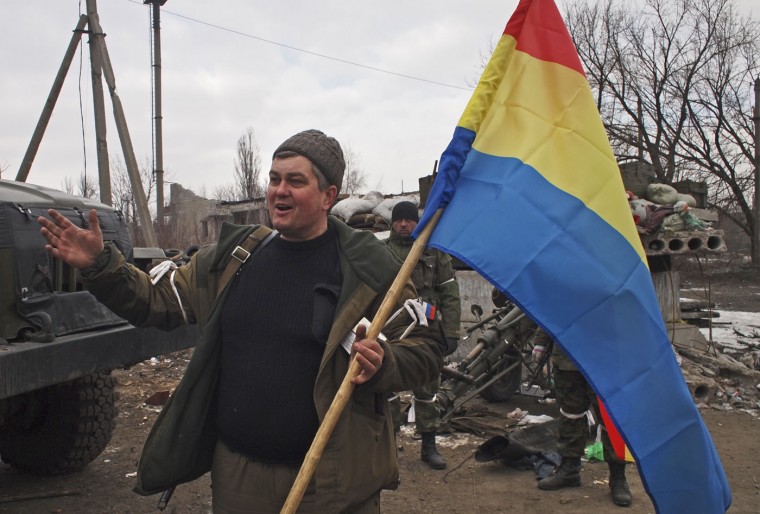 A pro-Russia rebel holds a flag of the rebel-held city of Luhansk in Debaltseve, eastern Ukraine, Thursday, Feb. 19, 2015. After weeks of relentless fighting, the embattled Ukrainian rail hub of Debaltseve fell Wednesday to Russia-backed separatists, who hoisted a flag in triumph over the town. The Ukrainian president confirmed that he had ordered troops to pull out and the rebels reported taking hundreds of soldiers captive. (Peter Leonard/AP Photo) 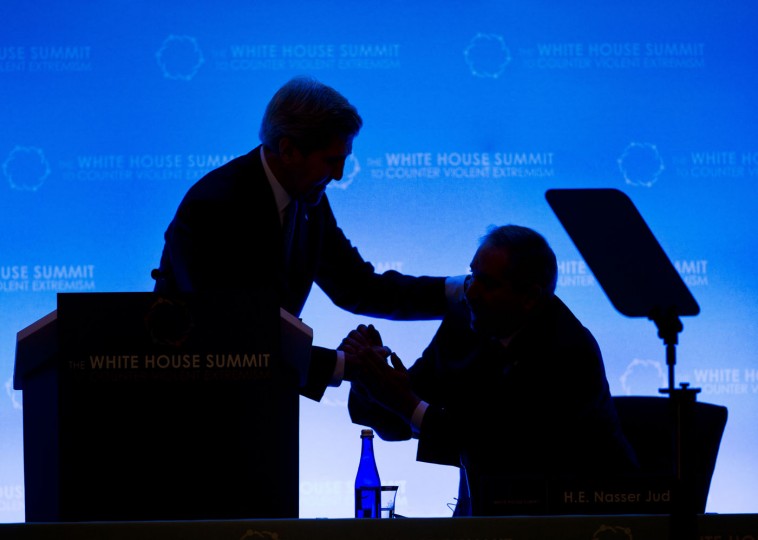 Secretary of State John Kerry, left, greets Jordan’s Foreign Affairs Minister Nasser Judeh, right, as they are silhouetted on stage at the opening of the Countering Violent Extremism (CVE) Summit, Thursday, Feb. 19, 2015, at the State Department in Washington. The White House is conveying a three-day summit to bring together local, federal, and international leaders to discuss steps the US and its partners can take to develop community-oriented approaches to counter extremist ideologies that radicalize, recruit and incite to violence. (Pablo Martinez Monsivais/AP Photo) 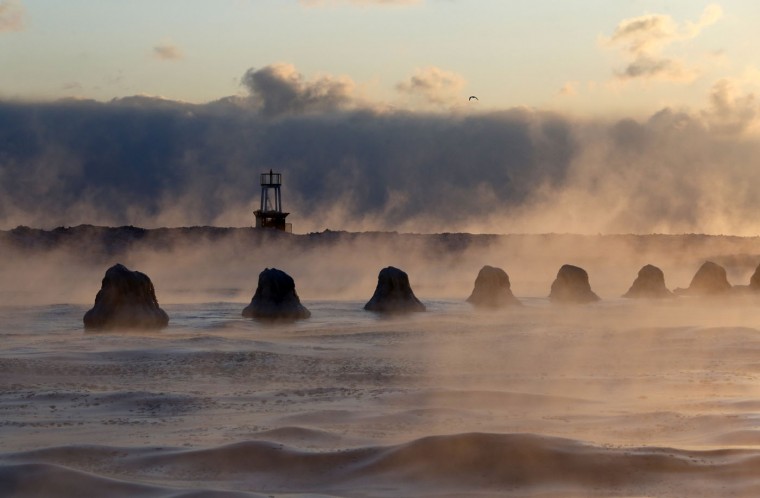 The sun rises above Lake Michigan as ice forms along the shore, Thursday, Feb. 19, 2015, in Chicago. Temperatures have dipped to as low as -13 in parts of Illinois with wind chills forecast to fall to between 20 and 30 degrees below zero. (Kiichiro Sato/AP Photo)

« Oscars through the years » Ringing in the Year of the Sheep