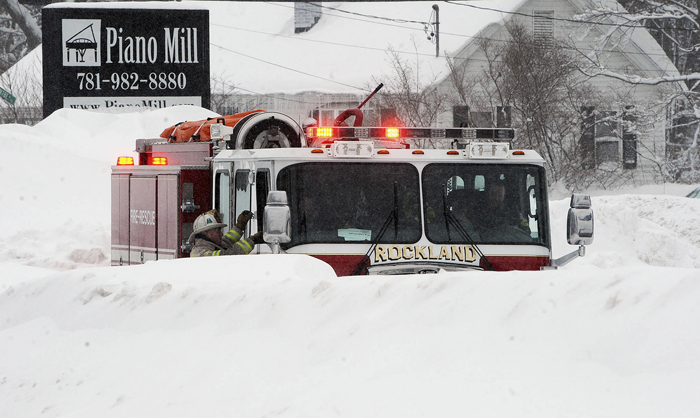 A firetruck sits outside the Piano Mill music store after its roof partially collapsed into the showroom from the weight of 29 inches of new snow Tuesday in Rockland, Mass. The store is home to a rhinestone-covered grand piano once owned by Liberace. Store owner Rob Norris said it is unclear if the Liberace piano was damaged. No one was in the building at the time of the collapse, nor was anyone being allowed inside until a structural engineer assesses damage. (Marc Vasconcellos/The Brockton Enterprise/AP) 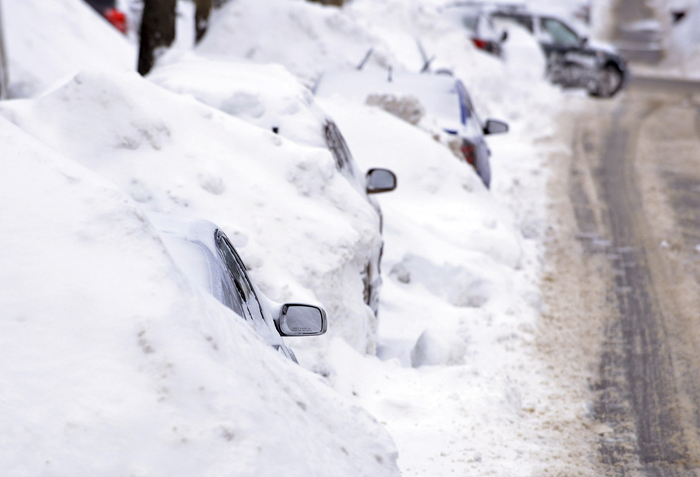 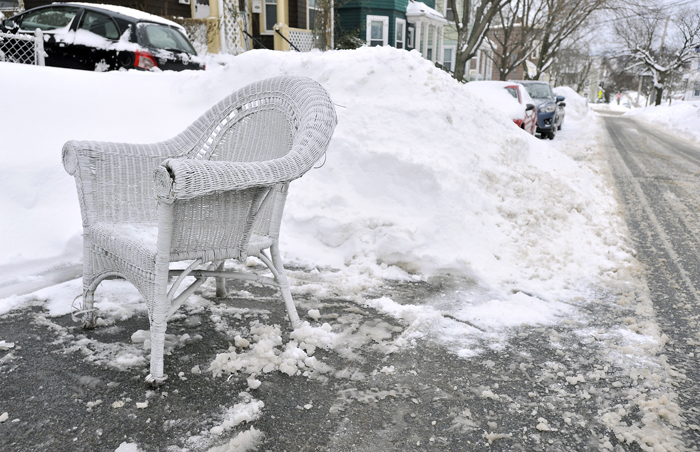 A patio chair stakes a claim to a parking space cleared of snow in Somerville, Mass., Tuesday. The latest snowstorm left the Boston area with another two feet of snow and forced the MBTA to suspend all rail service for the day. (Josh Reynolds/AP) 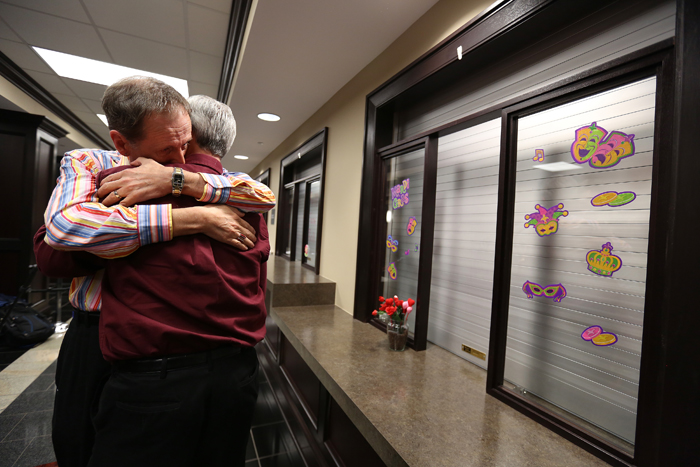 Robert Povilat, left, and Milton Persinger, comfort each other after hearing that for a second day, the Mobile County Probate office won’t issue marriage licenses on Tuesday in Mobile, Ala. A federal judge’s ruling went into effect Monday overturning Alabama’s ban on gay marriage after the U.S. Supreme Court refused the state’s request to stop the marriages. Alabama Chief Justice Roy Moore directed probate judges to refuse the licenses and resist what he called an “illegal” intrusion by the federal court. (Sharon Steinmann/AL.com/AP) 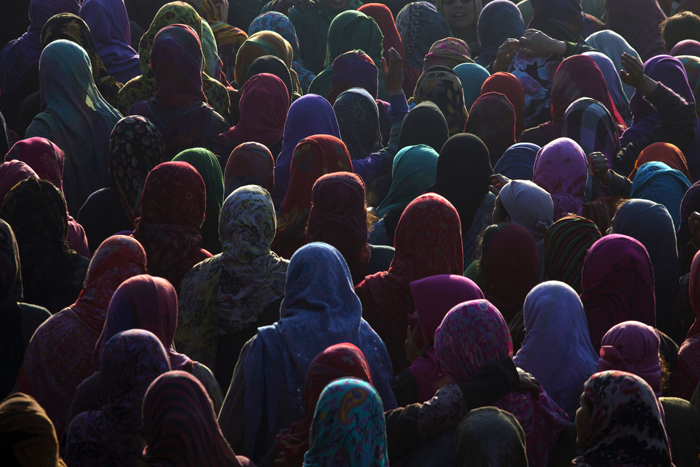 Kashmiri women participate in the funeral procession of Farooq Ahmed Bhat in Palhalan, some 22 miles north of Srinagar, Indian controlled Kashmir on Tuesday. Hundreds of angry protesters clashed with Indian authorities on Tuesday at the funeral of the young man killed during a demonstration in disputed Kashmir. Separatists called for a daylong strike in the tense Himalayan territory. (Dar Yasin/AP) 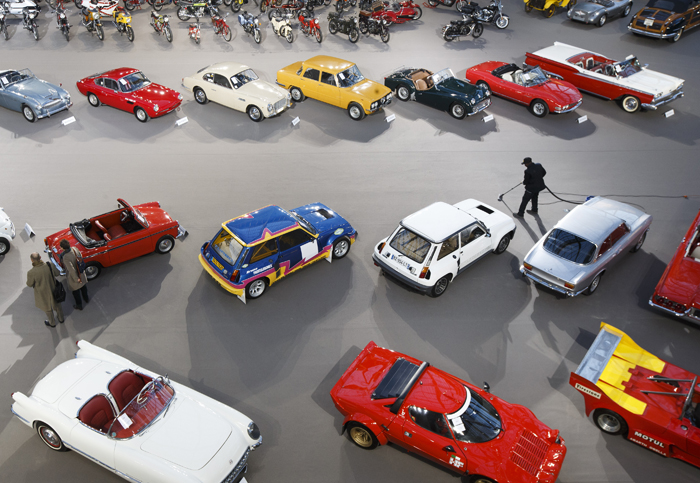 In this Feb. 4 photo a man cleans the floor as visitors walk past vintage and classic cars displayed by Bonhams auction house, during an exhibition, at the Grand Palais in Paris. (Jacques Brinon/AP) 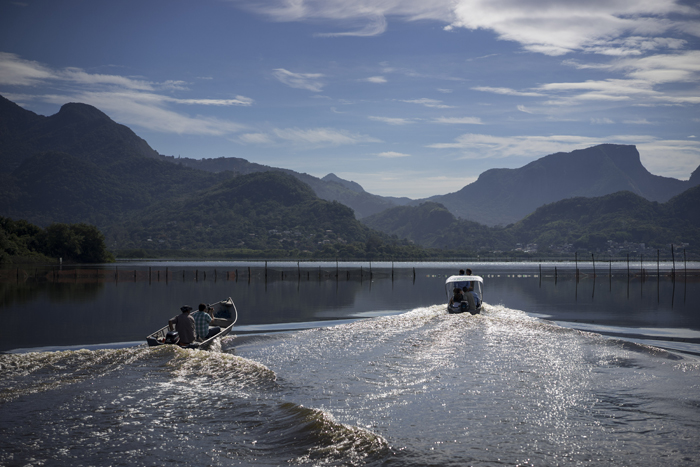 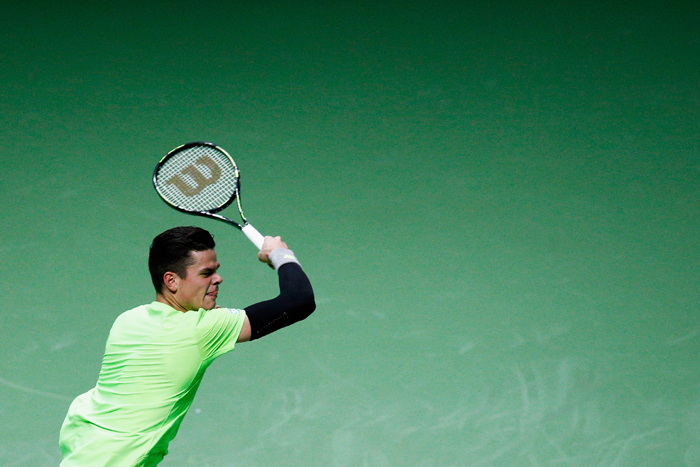 Milos Raonic of Canada in action against Andrey Kuznetsov of Russia during day 2 of the ABN AMRO World Tennis Tournament held at the Ahoy Rotterdam on Tuesday in Rotterdam, Netherlands. (Dean Mouhtaropoulos/Getty Images) 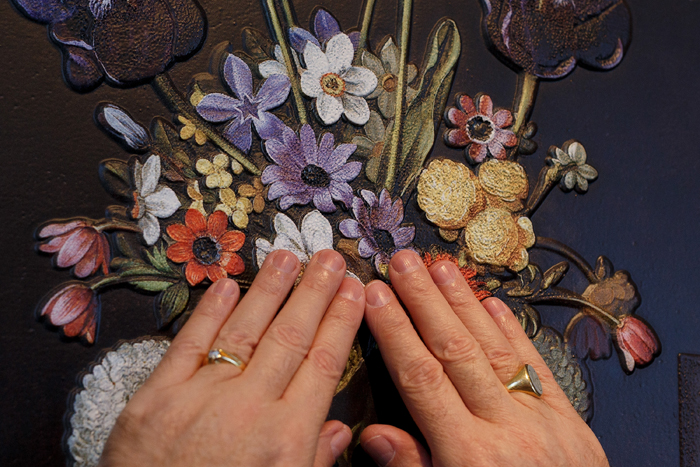 A blind person feels with his hands a copy of “Still life with Artichokes, Flowers and Glass Vessels” of Juan Van Der Hamen at The Prado Museum on Tuesday in Madrid, Spain. “Hoy toca el Prado” allows visitors to explore with their hands the copies of six masterworks. The copies were created using a technique called “Didu,” which provides texture and volume to the paintings. (Pablo Blazquez Dominguez/Getty Images) 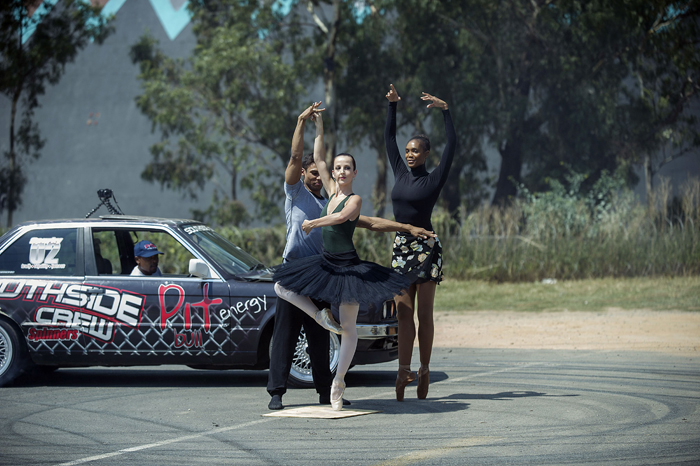 Johannesburg Ballet dancers perform on Tuesday in the Pirouette challenge in Soweto while Sparky, a street racer, makes doughnuts spins around the dancers. The challenge entices people to film their take on the pirouette and upload the video onto social media platforms. (MUJAHID SAFODIENMUJAHID SAFODIEN/AFP/Getty Images) 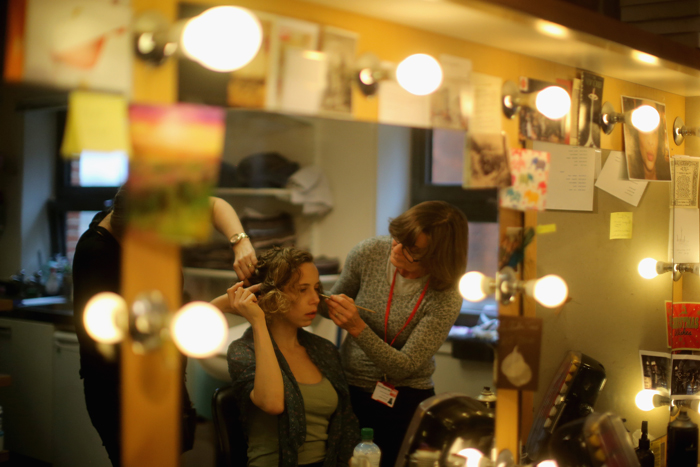 RSC actress Michelle Terry as Rosaline has her wig and make-up applied before the start of the matinee performance of Love’s Labour’s Lost on Tuesday in Stratford-upon-Avon, England. The latest production of Shakespeare’s Loves Labours Lost is set on the eve of the First World War and is to be screened by satellite live to cinemas across the world on Wednesday. Directed by Christopher Luscombe, the play is part of a season marking the centenary of the First World War. (Christopher Furlong/Getty Images) 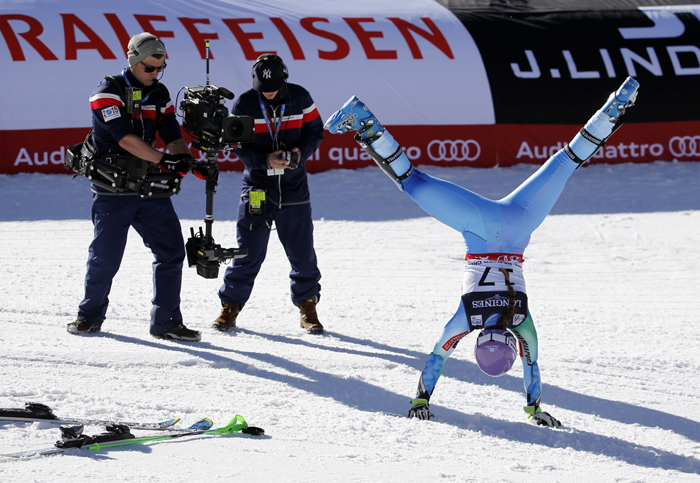 Slovenia’s Tina Maze does a cartwheel after finishing her run during the women’s alpine slalom competition at the alpine skiing world championships Monday in Beaver Creek, Colo. (Marco Trovati/AP) 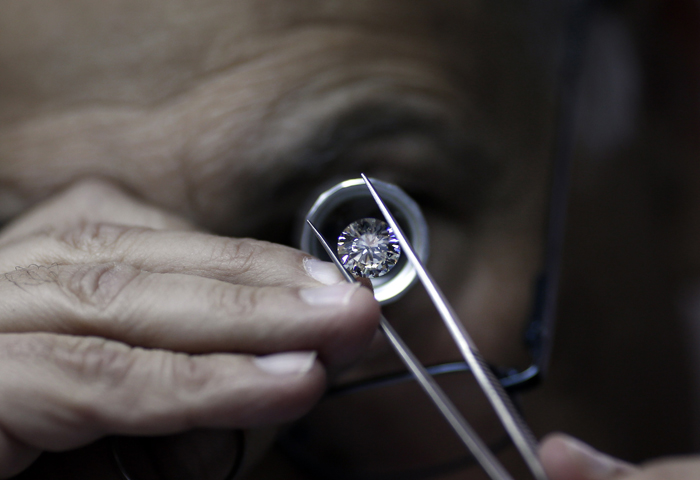 An Israeli diamonds buyer checks the quality of a diamond during the International Diamond Week on Tuesday in the Israeli city of Ramat Gan, east of Tel Aviv. (THOMAS COEX/AFP/Getty Images) 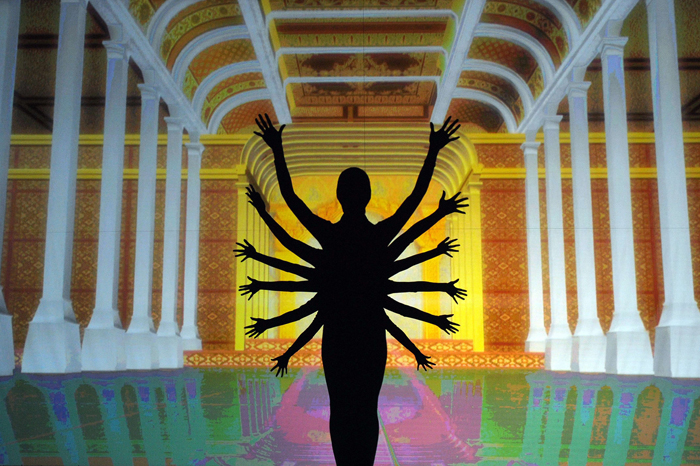 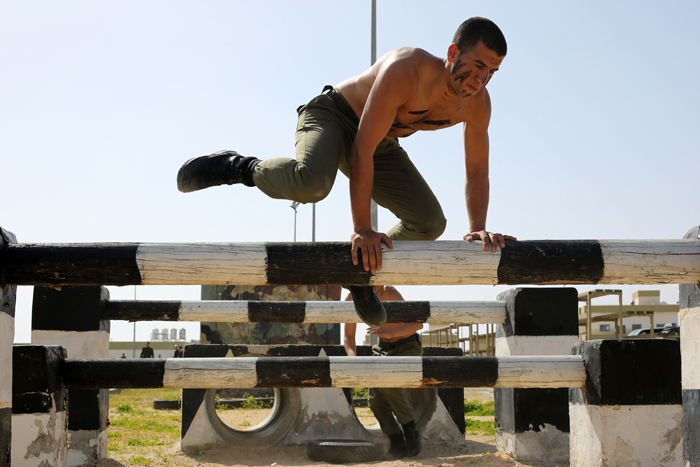 Palestinian men take part in a training session for the presidential guard unit in the West Bank city of Jericho on Tuesday. (ABBAS MOMANI/AFP/Getty Images) 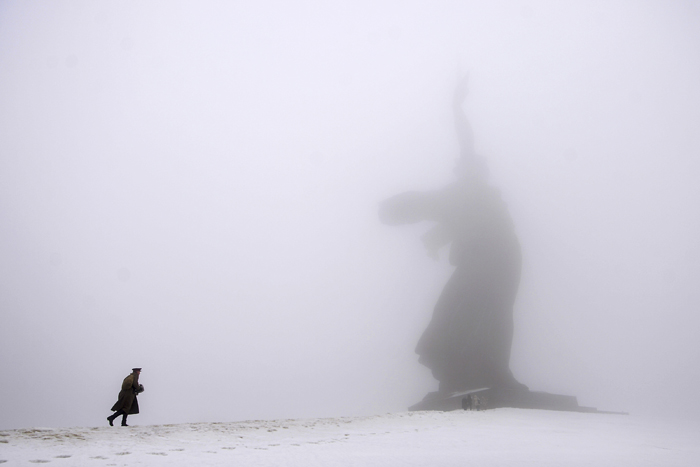 In this Feb. 2 photo a man dressed in Red Army World War II uniform walks toward the monument to Motherland during ceremonies marking the 72nd anniversary of the Battle of Stalingrad in the southern Russian city of Volgograd, once known as Stalingrad. (Dmitry Rogulin/AP) 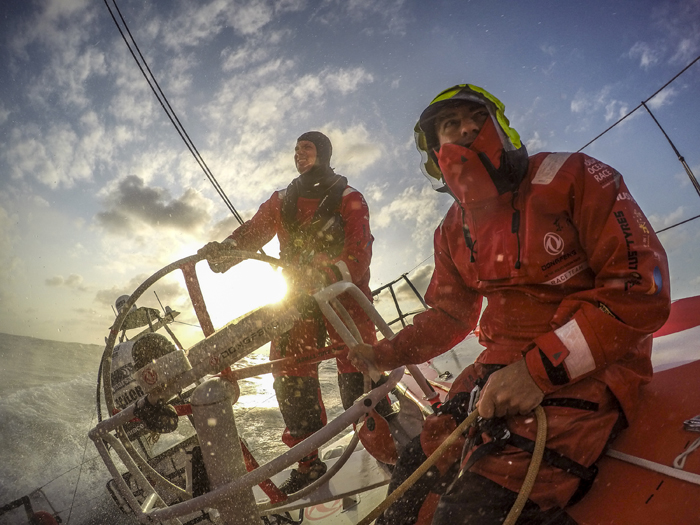 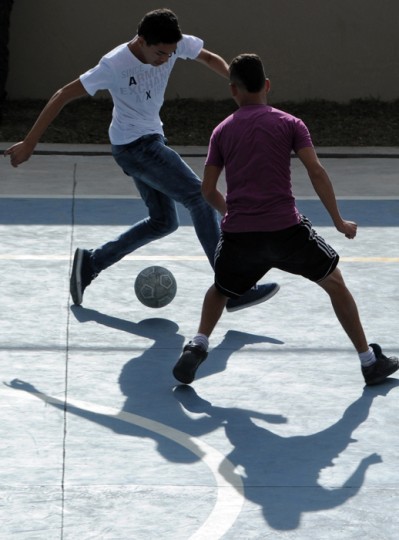 Boys play soccer at the San Jose de la Vega recreational park in Tegucigalpa, on Jan. 20. The park, whose construction was ordered by the Honduran government, is guarded by the military in order to keep gang members at bay. (Orlando SIERRAORLANDO SIERRA/AFP/Getty Images) 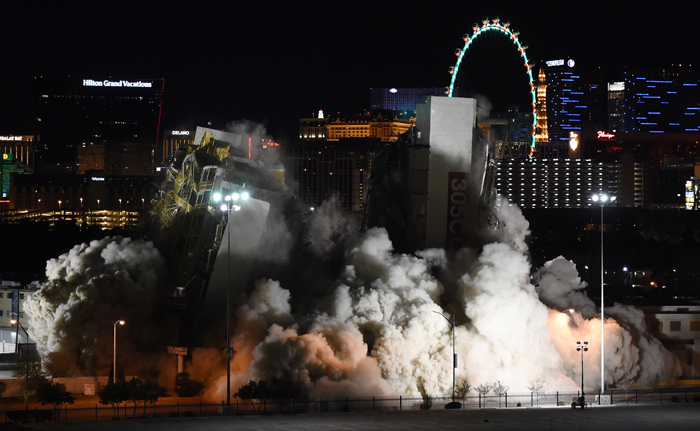 The Clarion Hotel and Casino is imploded on Tuesday in Las Vegas. It is the first casino implosion in Las Vegas since the New Frontier Hotel & Casino was brought down in 2007. The 12-story Clarion, located just off the Las Vegas Strip, opened in 1970 as the Royal Inn and changed ownership over the years becoming known by several names including the Royal Americana Hotel, The Paddlewheel Hotel Casino, the Debbie Reynolds Hollywood Hotel and the Greek Isles Hotel & Casino. The Clarion closed for good in September, and was purchased for $22.5 million by Las Vegas developer Lorenzo Doumani, who plans to turn the six-acre property into a mixed-use resort. (Ethan Miller/Getty Images)