A. Hoen & Co. and a legacy of lithography

The Hoen Lithograph property was one of six awarded by the city last month, after a push to market notable buildings owned by the city for private development.

The 85,000-square-foot property, where some of the first maps were produced for National Geographic, has been vacant since 1981.

Here’s a look at a few of the prints produced back when A. Hoen & Co. was a printing hub in the city, courtesy of the Library of Congress. 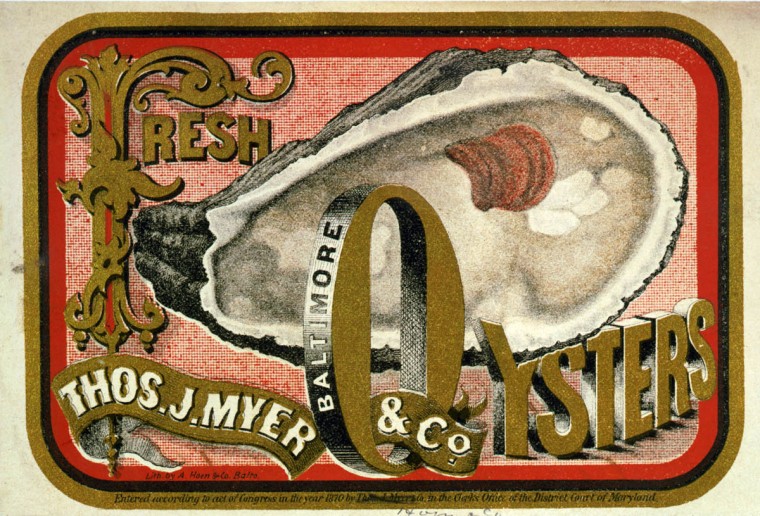 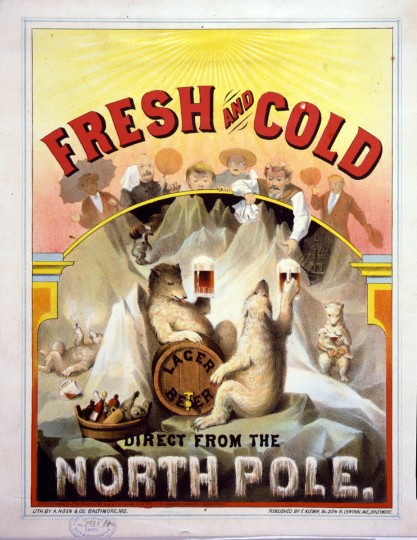 Fresh and cold–Lager beer direct from the North Pole – c1877 — Print shows a scene at the North Pole where polar bears are enjoying mugs of lager beer, with a trompe-lÏil effect showing overheated people, with fans and sunshades, and one man reaching into the scene for a frosty “fresh and cold” mug of lager beer offered to him by a polar bear. (A. Hoen & Co./Library of Congress) 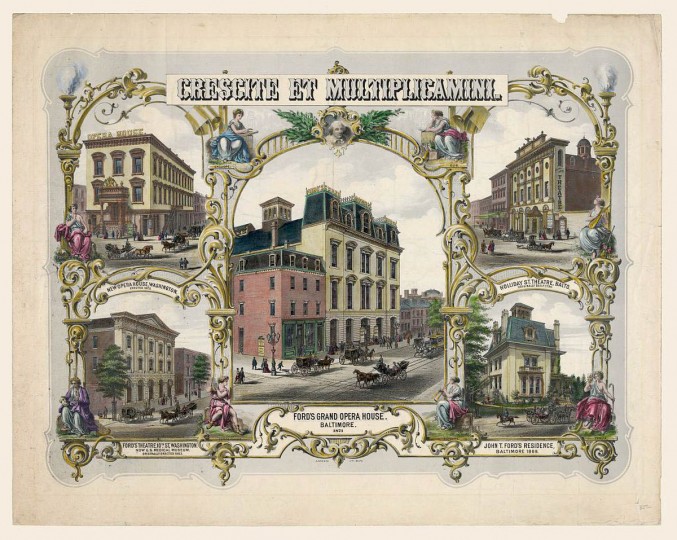 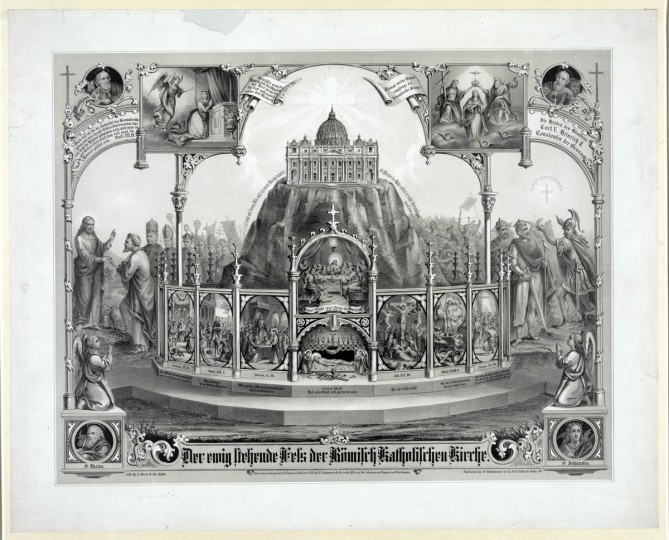 Der ewig stehende Fels der Romisch Katholischen Kirche / lith. by A. Hoen & Co., Balto. — c1872 — This allegorical print, intended for an American Catholic audience, illustrates the official church response to the First Vatican Council of 1869-70, which decreed that the Pope is infallible. In the center of the image, St. Peter’s Basilica rests on a massive rock–a reference to the assertion that papal authority descends from the Apostle Saint Peter. At the base of the rock are eight vignettes from the life of Christ with accompanying biblical citations. Each corner has one of the four evangelists, clockwise from left: St. Matthew, St. Mark, St. John, and St. Luke. Two vignettes frame the basilica: the Annunciation of the Angel Gabriel to Mary and Mary’s Assumption into Heaven. Two vignettes frame the central image: Jesus presenting the keys to the kingdom to Peter (behind whom stand Pope Pius IX and other clerices) and Constantine showing the heavenly cross with the motto “In Hoc Signo Vinces” to Charles V, the Holy Roman Emperor who issued a ban against Martin Luther and Henry II. (A. Hoen & Co./Library of Congress) 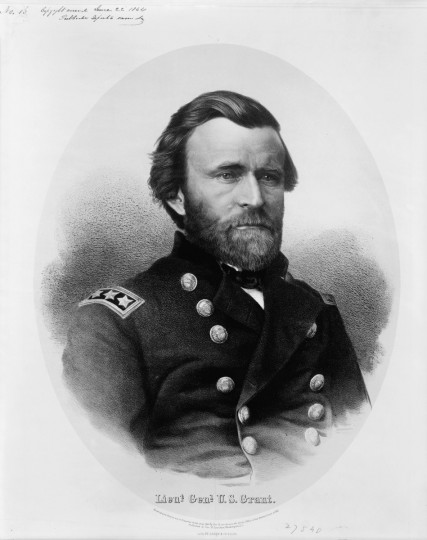 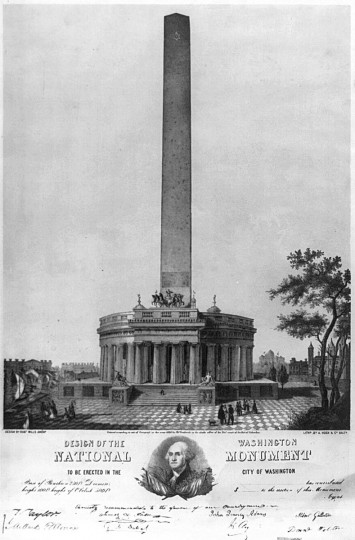 Design of the Washington National Monument to be erected in the city of Washington — (A. Hoen & Co./Library of Congress) 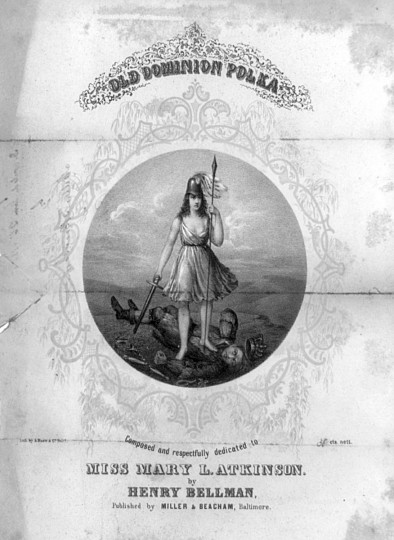 Old Dominion Polka — 1855 — An illustrated sheet music cover for a polka composed by Henry Bellman. Within a circular, ornamental border is an allegorical scene based on the seal of the State of Virginia. A helmeted female figure armed with a spear and sword (probably Minerva) stands on the figure of a fallen despot. The latter’s crown and broken scepter appear near him on the ground. The scene is also littered with broken manacles and a cross. (A. Hoen & Co./Library of Congress) 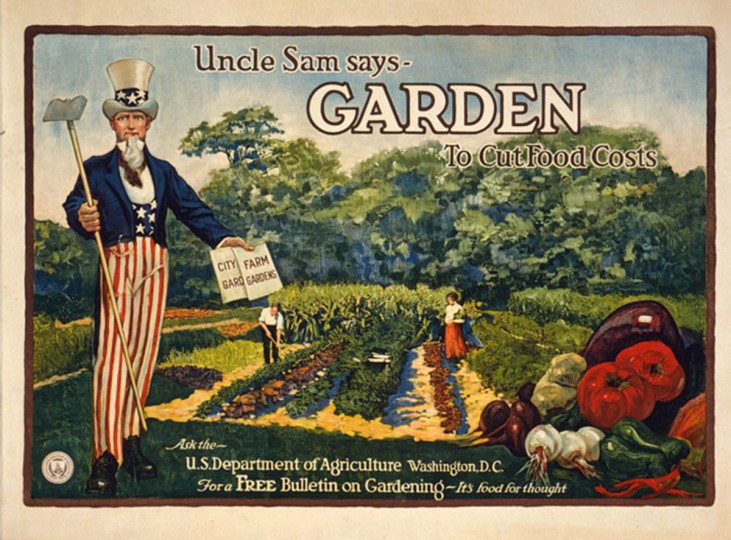 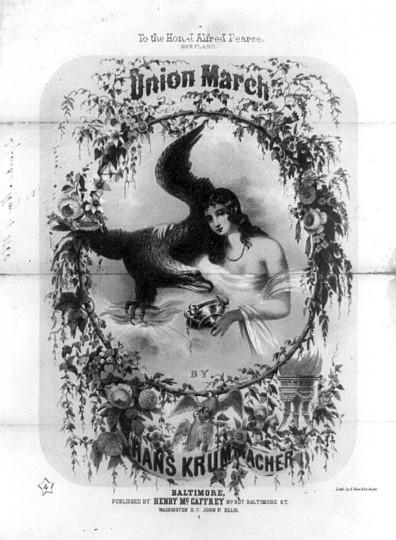 Union March — 1860 — An illustrated sheet music cover for a Unionist song by Hans Krummacher, dedicated to Maryland Democratic senator James Alfred Pearce. The cover is adorned with a drawing of the goddess Hebe, the mythological Greek goddess of youth and cup-bearer of Zeus. Here Zeus is present as an eagle grasping flaming thunderbolts in its talons. (See Edward Savage’s “Liberty in the Form of the Goddess of Youth,” no. 1796-2, for an earlier pairing of Hebe with the Jovian eagle.) With her right arm around the eagle, Hebe pours a libation from an ornate golden cup. Surrounding the vignette is a floral wreath. Two doves and a flaming urn appear below. (A. Hoen & Co./Library of Congress) 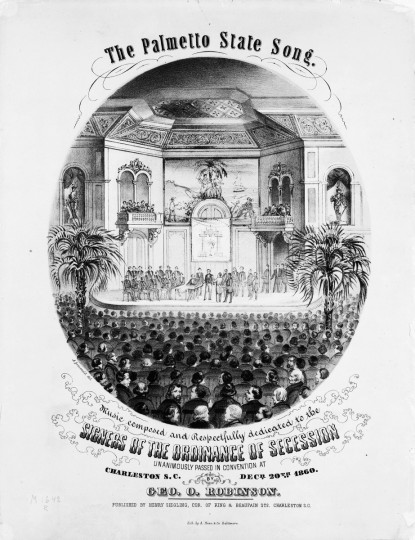 The Palmetto State song — 1861 — An illustrated cover for sheet music celebrating the South Carolina state convention on December 20, 1860, where an ordinance of secession was passed unanimously, thereby severing the state’s ties with the Union. The song is “respectfully dedicated to the signers of the Ordinance of Secession.” The cover illustration shows the interior of the crowded hall, where on a stage several of the 169 delegates are gathered around the secession document. Above them hangs the flag of South Carolina, with a palmetto appearing under an arch. Above the arch is an allegorical mural with a palmetto tree in the center, under which Music (or Poetry, holding a lyre), Liberty, and a third female figure repose. The central vignette is flanked by a farmer (left) and sailor with an anchor. Two additional allegorical figures appear in niches on either side of the stage. (A. Hoen & Co./Library of Congress) 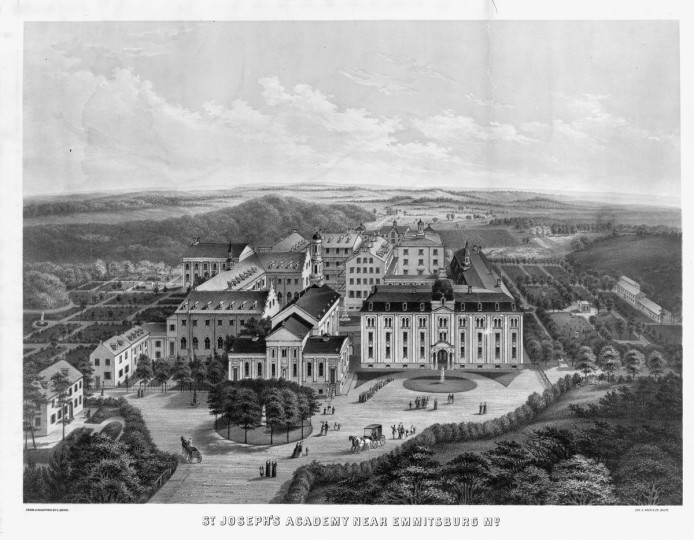 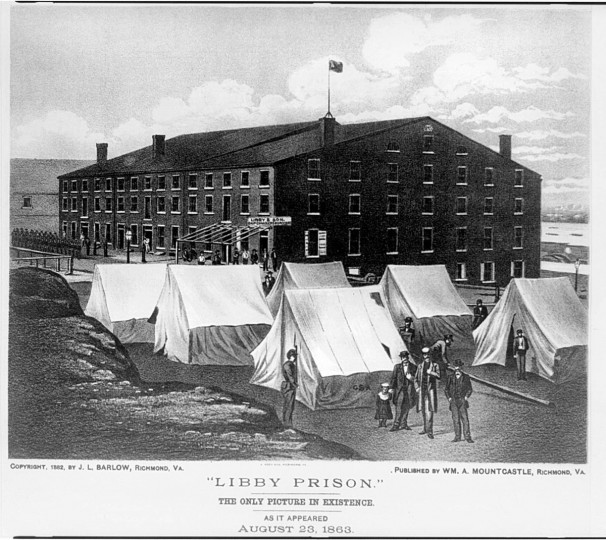 Title: “Libby Prison.” The only picture in existence. As it appeared August 23, 1863 / A. Hoen & Co. Richmond, Va. — Print shows three men and a child standing in the foreground with tents labeled “C.S.A.” immediately behind them and the Libby Prison building in the background. (A. Hoen & Co./Library of Congress) 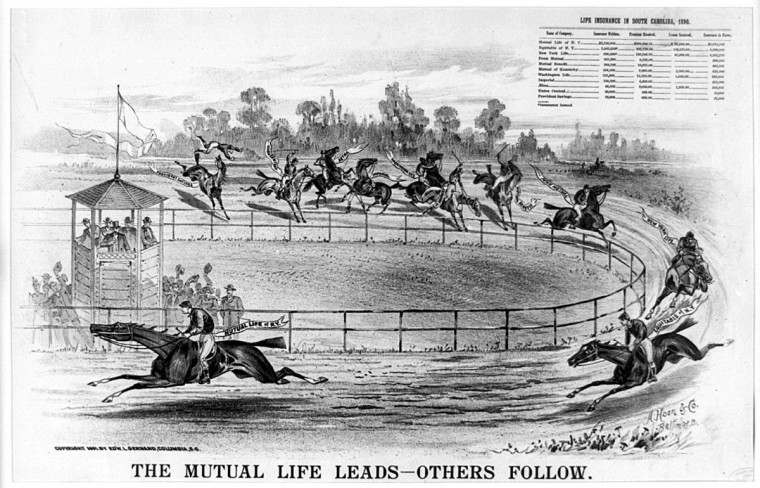 The Mutual Life Leads – Others Follow — 1891 — Print shows a horse race in progress at a racetrack; each horse and jockey represents a different insurance company, in the lead is “Mutual Life of N.Y.” followed by “Equitable of N.Y., New York Life, Penn Mutual, Mutual Benefit, Mutual of Kentucky, Washington Life, Imperial [whose jockey is standing on the ground, beating his horse], Aetna, Union Central, [and] Provident Savings” whose horse has just thrown the jockey. (A. Hoen & Co./Library of Congress) 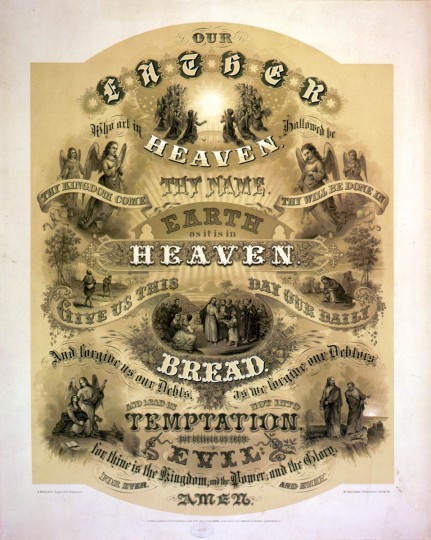 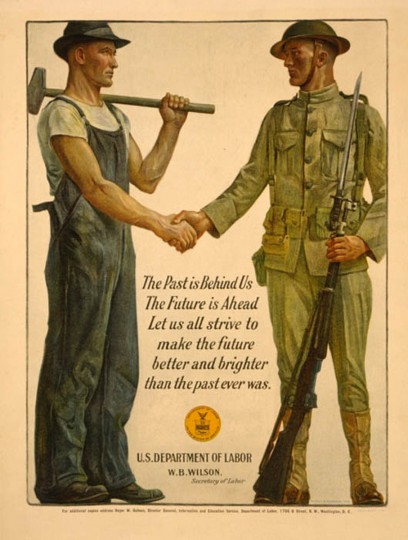 The past is behind us, the future is ahead. Let us all strive to make the future better and brighter than the past ever was. — 1918 — Soldier shaking hands with worker holding sledgehammer. (A. Hoen & Co./Library of Congress) 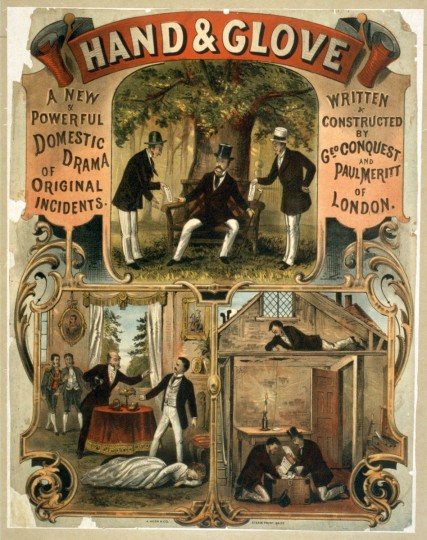 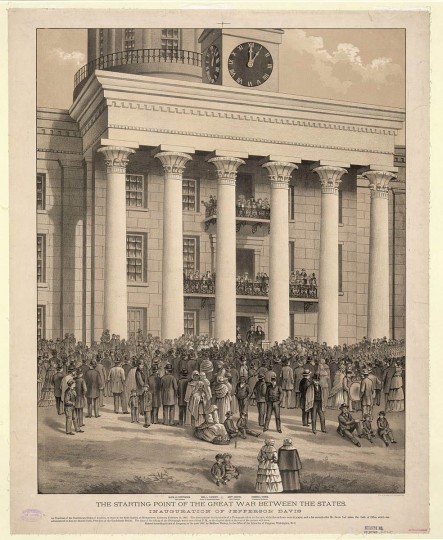 The starting point of the great war between the states — c1888 — Print shows a crowd gathered in front of the capitol building at Montgomery, Alabama, at the time of the announcement of Jefferson Davis as the first President of the Confederate States of America; also shown with Davis are “Alex. H. Stephens, Vice-President, Wm. L. Yancey, Leader of the Secession Party, [and] Howell Cobb, President of the Senate.” (A. Hoen & Co./Library of Congress)

The real estate firm founded by developer Bill Struever said Tuesday it is part of a joint venture planning to turn a historic complex in East Baltimore into housing, office space and café. The proposal envisions about 50 apartments, with special light and noise block-out features for nurses.