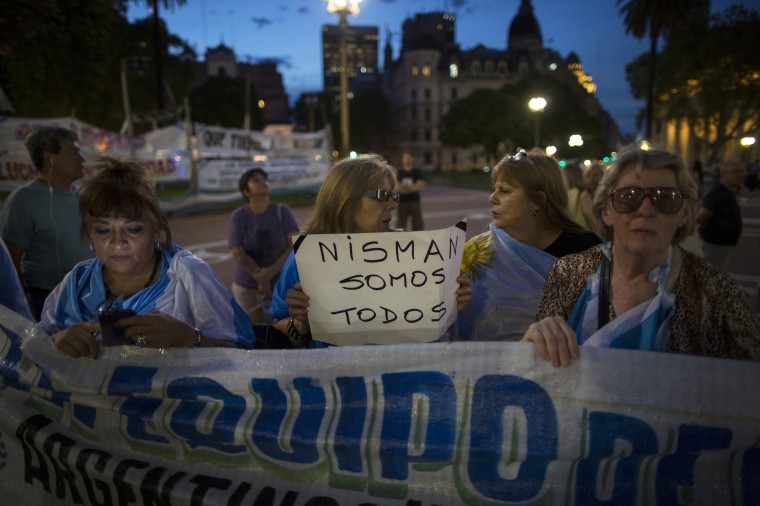 A protester carries a sign that reads in Spanish “We’re all Nisman,” referring to the death of special prosecutor Alberto Nisman, in Plaza de Mayo square in Buenos Aires, Argentina, Monday, Jan. 26, 2015. Nisman was found dead Jan. 18 in his apartment, the day before he was scheduled to elaborate on explosive allegations that President Cristina Fernandez shielded Iranian officials suspected in the largest terrorist attack in the South American country’s history. (AP Photo/Ivan Fernandez) 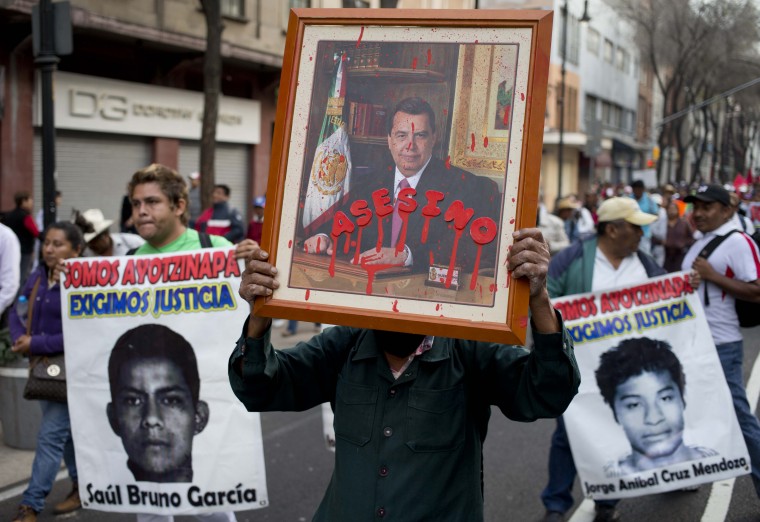 A protestor carries a defaced portrait of the former governor of Guerrero state, Angel Aguirre, covered by the word in Spanish “Assassin” during a march marking the fourth month since the disappearance of 43 students from a rural teachers’ college, in Mexico City, Monday, Jan. 26, 2015. Prosecutors have said police kidnapped the students on Sept. 26 in the southern state of Guerrero and handed them over to drug gang members, who killed them and burned the bodies. Protesters said Monday the government has failed to clear up doubts. (AP Photo/Eduardo Verdugo) 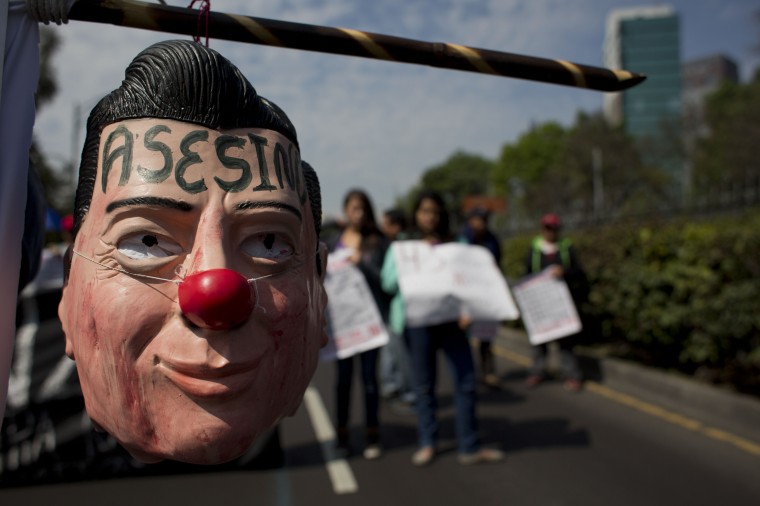 A protestor carries a hanging mask of Mexican President Enrique Pena Nieto marked with the word in Spanish “Assassin” during a march in Mexico City, Monday, Jan. 26, 2015. Protest marches were planned in cities around the country to mark the fourth month since the disappearance of 43 students in southern Guerrero state. The federal prosecutor has said the students were detained by local police and handed over to a drug gang, who killed them and burned their bodies. (AP Photo/Rebecca Blackwell) 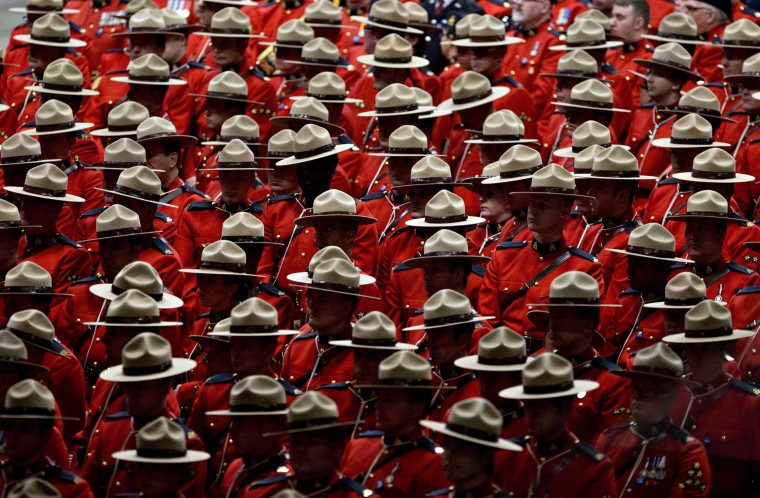 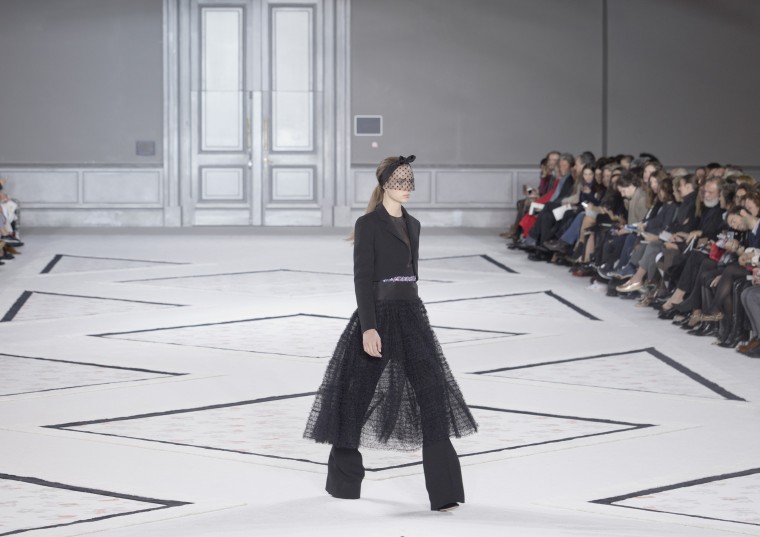 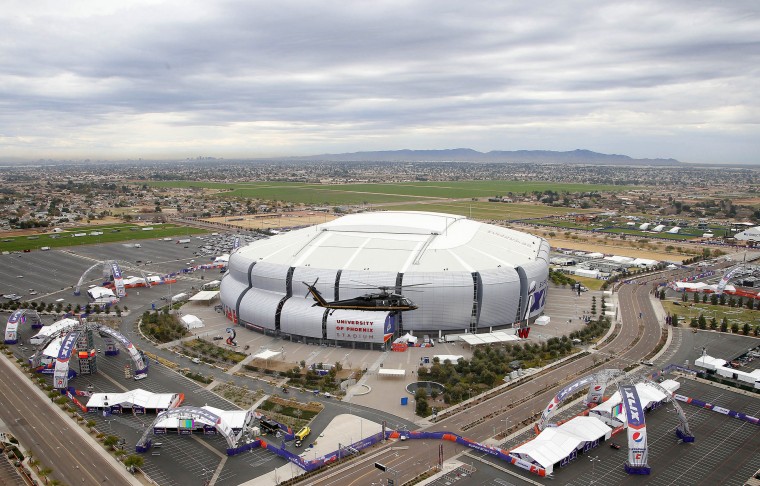 A U.S. Customs and Border Protection Black Hawk helicopter flies above University of Phoenix Stadium, site of Super Bowl XLIX football game, for a media security demonstration Monday, Jan. 26, 2015, in Glendale, Ariz. The Black Hawk helicopters usually deployed along the U.S.-Mexico border have been brought to the Super Bowl venue to assist with the security effort. (AP Photo/Ross D. Franklin) 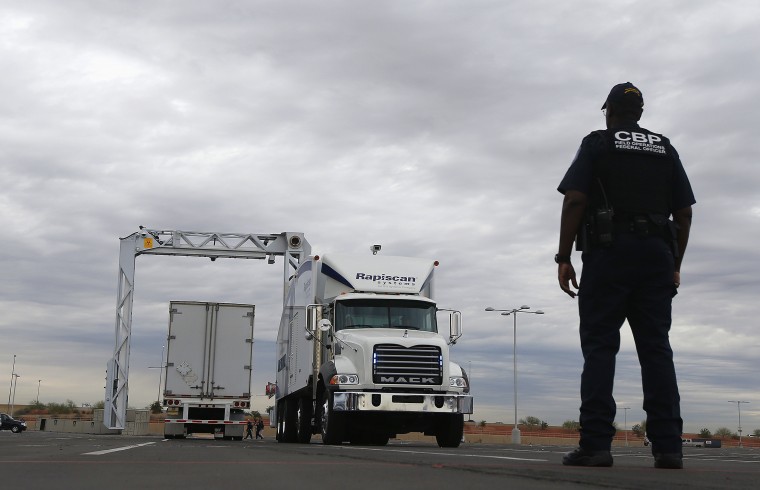 A U.S. Customs and Border Protection agent watches a truck-sized X-ray scanning machine, center, slowly scan a tractor-trailer at University of Phoenix Stadium, site of the NFL Super Bowl XLIX football game, during a security demonstration for the media Monday, Jan. 26, 2015, in Glendale, Ariz. The large mobile X-ray machines that are used to detect contraband and explosives are usually deployed at the U.S.-Mexico border. (AP Photo/Ross D. Franklin) 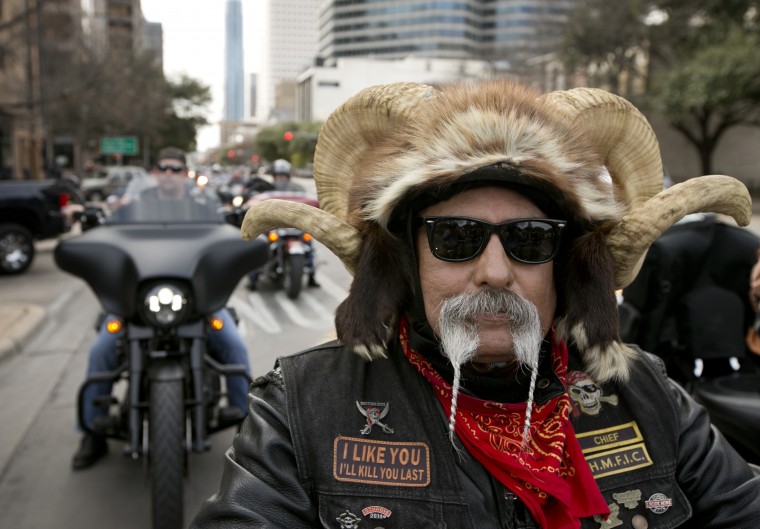 Rocket Navarro rides on Congress Avenue towards the Capitol for the Texas Confederation of Clubs and Independents Legislative Day, Monday, Jan. 26, 2015, in Austin, Texas. Hundreds of bikers from around Texas paraded for motorcycle rights. (AP Photo/Austin American-Statesman, Jay Janner) 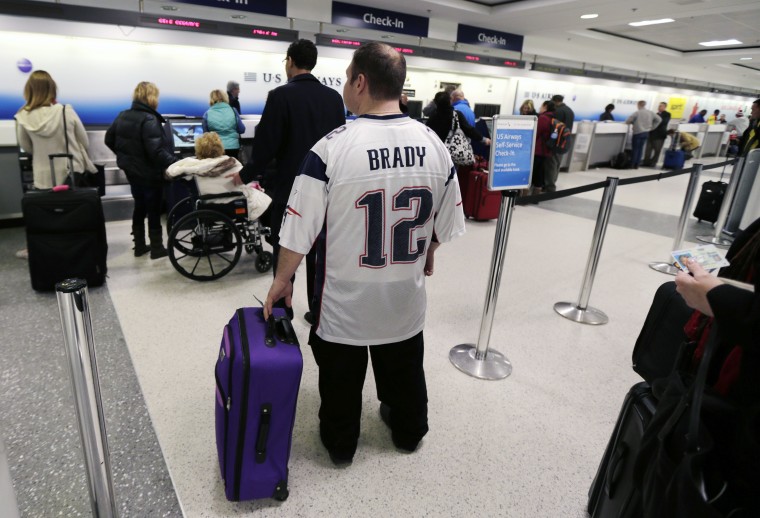 New England Patriots fan Anthony Monaco, of the South Boston neighborhood of Boston, waits in line for his flight to Phoenix, at Logan Airport in Boston, Monday, Jan. 26, 2015. Monaco, who has Super Bowl tickets, hopes to fly out of the Boston before a winter storm that is expected to hit the area with about two feet of snow in the winter storm. (AP Photo/Charles Krupa)

Crystal, a golden retriever, dashes through the snow as she gets away from Danielle Reid, who was walking dogs with her mom, at Revere Beach in Revere, Mass., Monday, Jan. 26, 2015. New England is bracing for a blockbuster blizzard threatening more than 2 feet of snow, hurricane-force winds, coastal flooding and widespread power outages. (AP Photo/Charles Krupa) 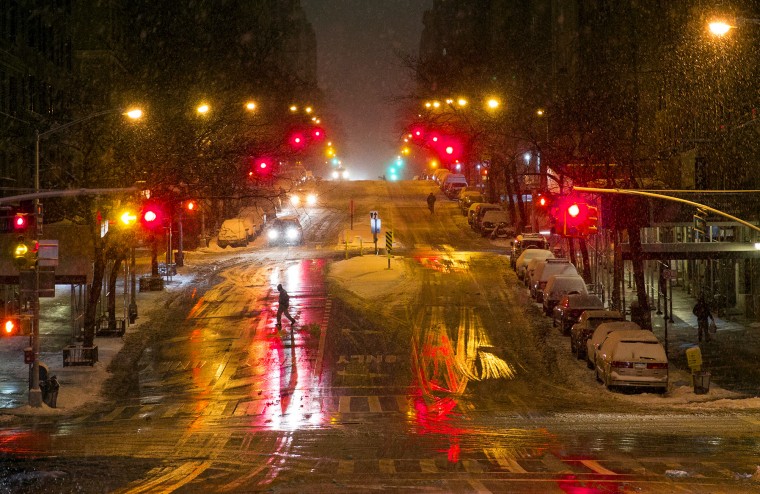 A person crosses a snow-covered street in the Upper West Side neighborhood of New York, Monday, Jan. 26, 2015. People in the Northeast by the thousands prepared for a snowstorm that could be one for the history books, with some 35 million people in its path in the Philadelphia-to-Boston corridor. (AP Photo/Craig Ruttle) 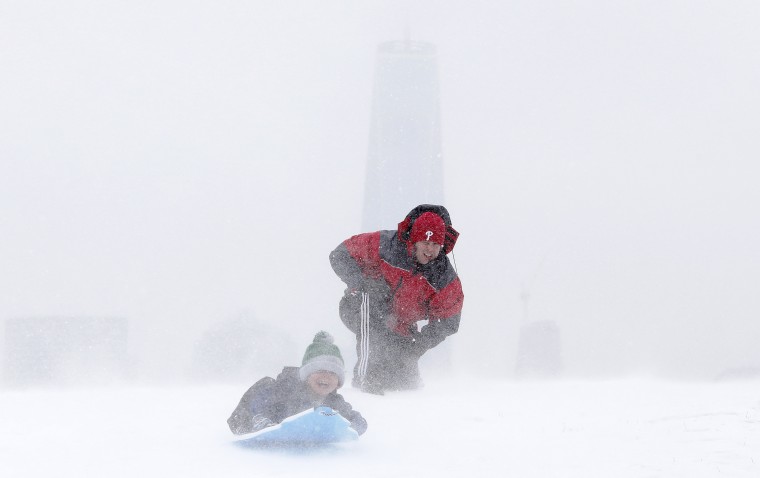 Rick Caso, center, watches as his son Andrew sleds down a hill, with One World Trade Center obscured in the background, at Liberty State Park, Monday, Jan. 26, 2015, in Jersey City, N.J. The Philadelphia-to-Boston corridor of more than 35 million people began shutting down as a monster storm, that could unload a paralyzing 1 to 3 feet of snow, moved through the northeast. (AP Photo/Julio Cortez) 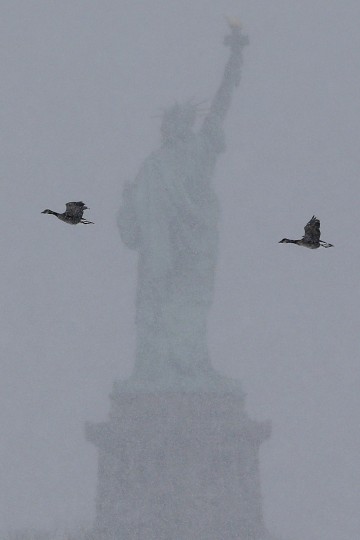 Birds fly near the Statue of Liberty during a storm seen from Liberty State Park, Monday, Jan. 26, 2015, in Jersey City, N.J. The Philadelphia-to-Boston corridor of more than 35 million people began shutting down as a winter storm, that could unload a paralyzing 1 to 3 feet of snow, moved through the northeast. (AP Photo/Julio Cortez) 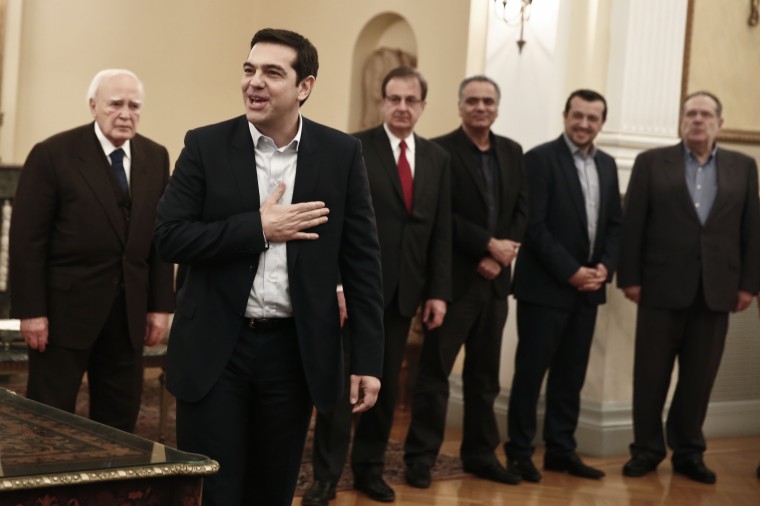 Greece’s Prime Minister Alexis Tsipras thanks the reporters after taking a secular oath at the Presidential Palace in Athens, Monday, Jan. 26, 2015. Radical left leader Alexis Tsipras has been sworn in as Greece’s new prime minister, becoming the youngest man to hold the post in 150 years. The 40-year-old broke with tradition and took a secular oath rather than the Greek Orthodox religious ceremony with which prime ministers are usually sworn in. (AP Photo/Petros Giannakouris) 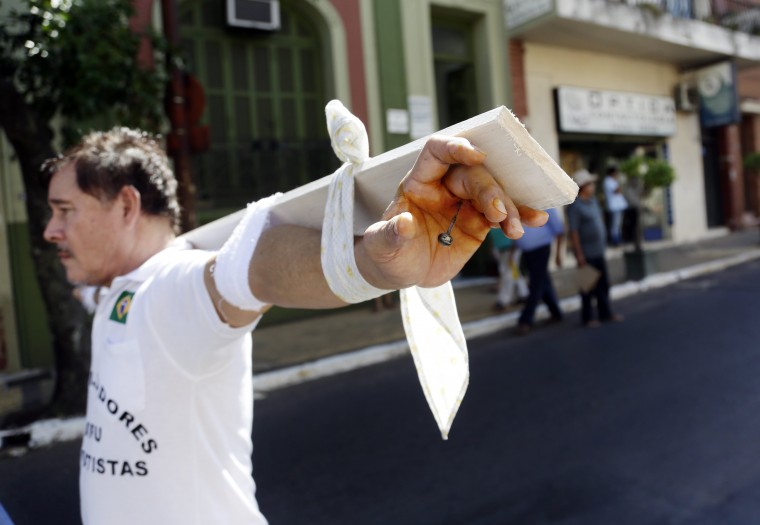 Roberto Gonzalez, a former worker of Unicom and Conempa, Paraguayan Itaipu Dam contractors, walks in the streets of Asuncion towards the Ministry of labor, in a symbolic crucifixion, in Paraguay, Monday, Jan. 26, 2015. Gonzalez is part of a group that for the last 25 years, after the construction on the dam was completed, is demanding compensation benefits from the contractors. The Itaipu hydroelectric dam on the Parana River straddles the Brazil-Paraguay border. (AP Photo/Jorge Saenz) 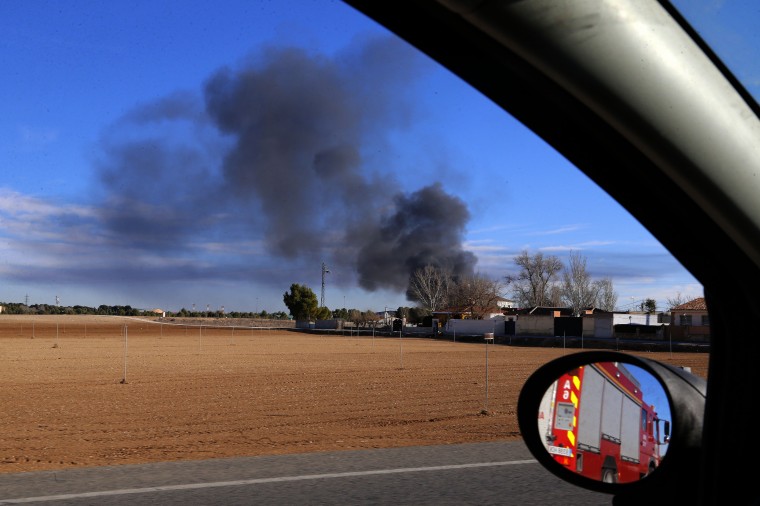 Smoke rises from a military base after a plane crash in Albacete, Spain, Monday, Jan. 26, 2015. A Greek F-16 fighter jet crashed into other planes on the ground during NATO training in southeastern Spain Monday, killing at least 10 people, Spain’s Defense Ministry said. Another 13 people were injured in the incident at the Los Llanos base, which sent flames and a plume of black smoke billowing into the air, a Defense Ministry official said. (AP Photo/Josema Moreno) 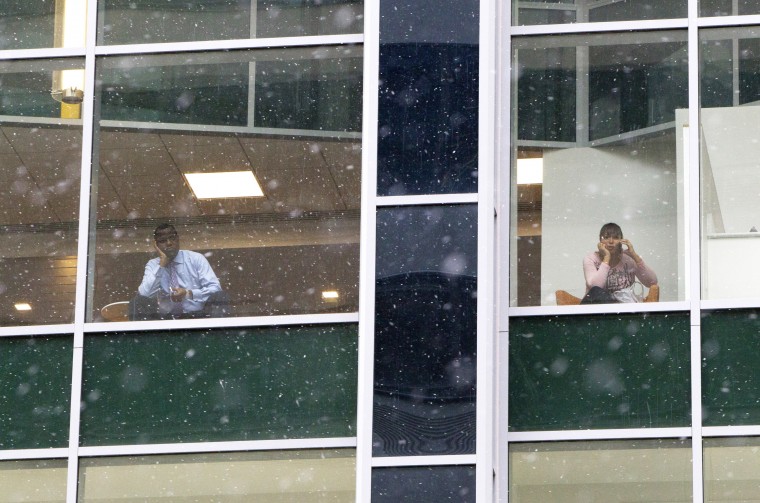 People look out from office building windows as snow falls in downtown Philadelphia, Monday, Jan. 26, 2015. The Philadelphia-to-Boston corridor of more than 35 million people began shutting down and bundling up against a potentially history-making storm that could unload a paralyzing amount of snow. (AP Photo/Michael R. Sisak)