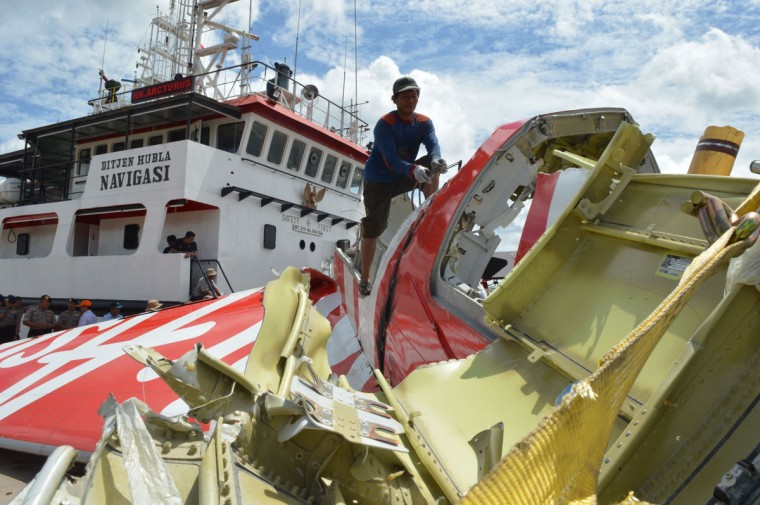 An Indonesian worker (top center) cuts the tail of the AirAsia flight QZ8501 in Kumai on January 12, 2015, after debris from the crash was retrieved from the Java sea. (AFP/Getty Images) 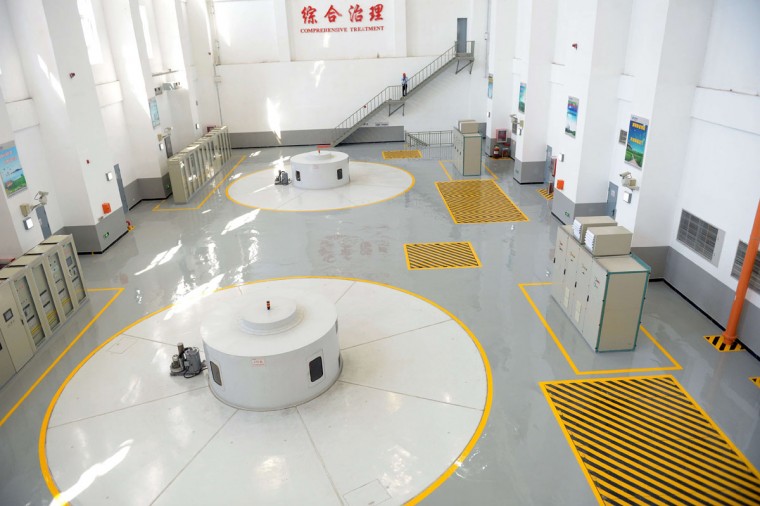 A Cambodian man (top) takes a picture of a generator in a powerhouse during the inauguration of the Stung Russey Chrum Krom hydro-electric dams in Koh Kong province on January 12, 2015. (AFP/Getty Images) 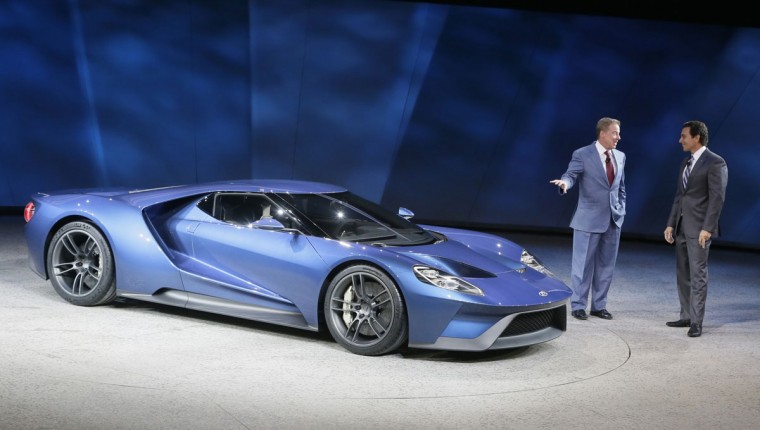 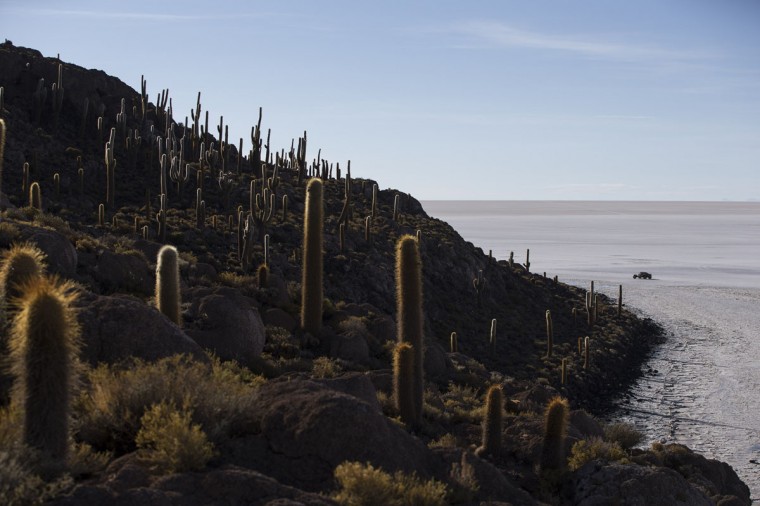 A competitor races past Cactus Island along the Uyuni salt flats during the eighth stage of the Dakar Rally 2015 between Uyuni, Bolivia, and Iquique, Chile, Sunday, Jan. 11, 2015. (AP Photo/Felipe Dana) 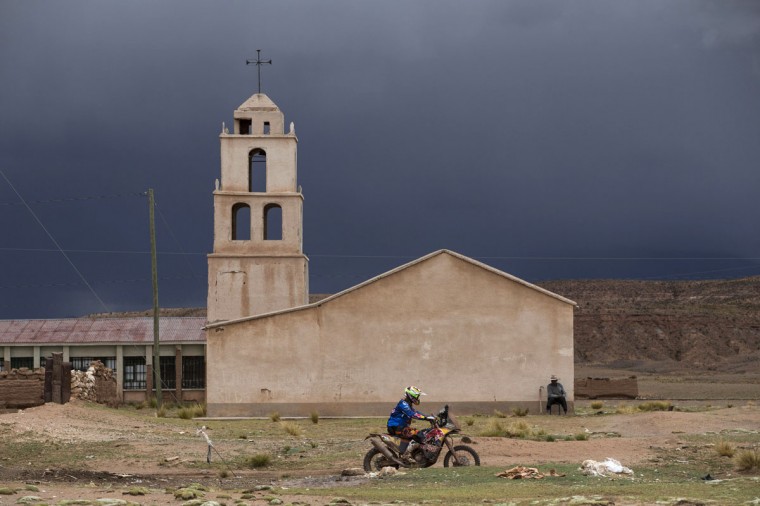 KTM rider Jordi Viladoms from Spain races during the seventh stage of the Dakar Rally 2015 between Iquique, Chile, and Uyuni, Bolivia, Sunday, Jan. 11, 2015. The race will finish on Jan. 17, passing through Bolivia and Chile before returning to Argentina where it started. (AP photo/Felipe Dana) 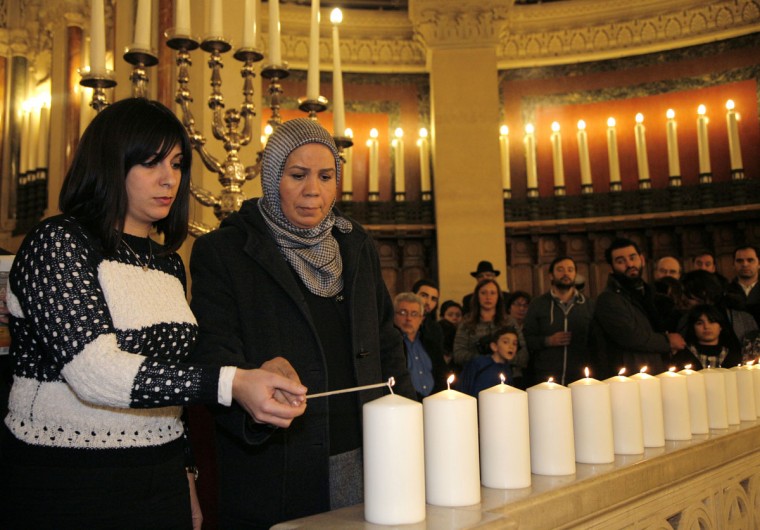 Latifa Ibn Ziaten, right, president of the Imad association and mother of French soldier Imad Ibn Ziaten who was killed by Islamist gunman Mohamed Merah, attends a ceremony at the Grand Synagogue in Paris, France, for all the victims of the attacks in Paris this week, which claimed 17 lives, Sunday, Jan. 11, 2015. (AP Photo/Matthieu Alexandre, Pool) 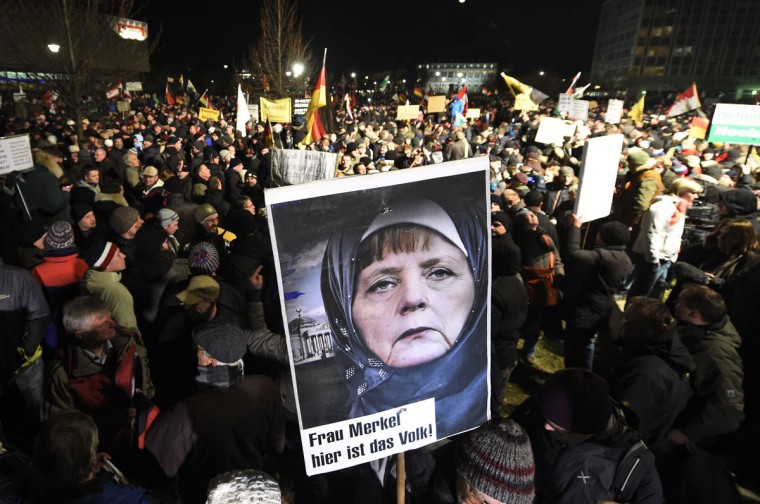 A protestor holds a poster showing German Chancellor Angela Merkel wearing a head scarf in front of the Reichtstags building with a crescent on top and the writing ‘Mrs Merkel here is the people’ during a rally of the group Patriotic Europeans against the Islamization of the West, or PEGIDA, in Dresden, Germany, Monday, Jan. 12, 2015. (AP Photo/Jens Meyer) 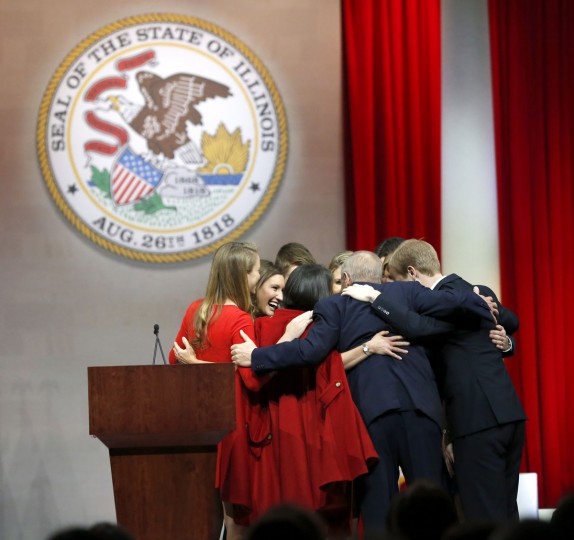 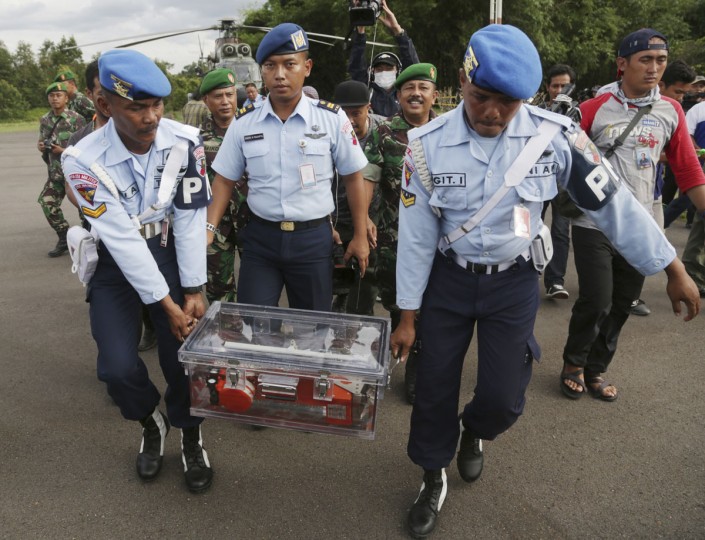 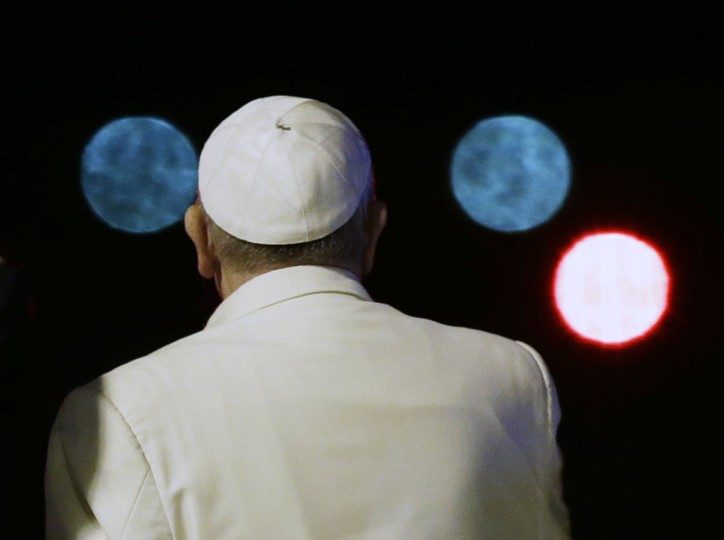 Pope Francis boards the airplane on the occasion of his trip to Sri Lanka and Philippines, at Rome’s Fiumicino International Airport, Monday, Jan. 12, 2015. (AP Photo/Gregorio Borgia) 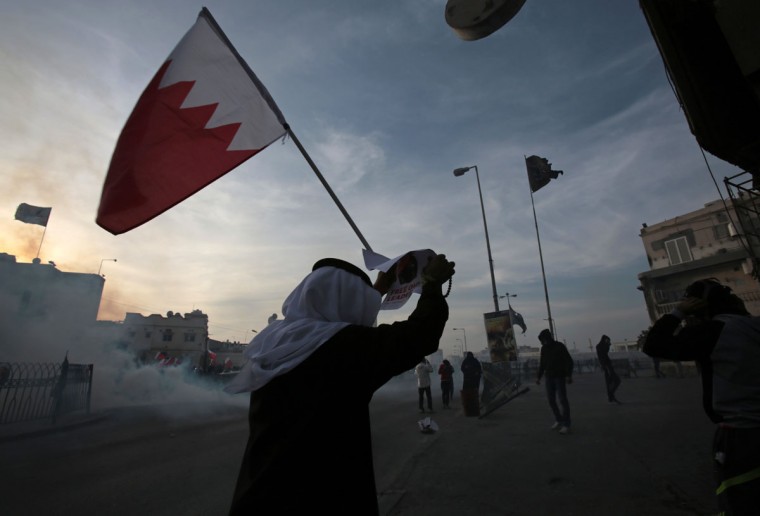 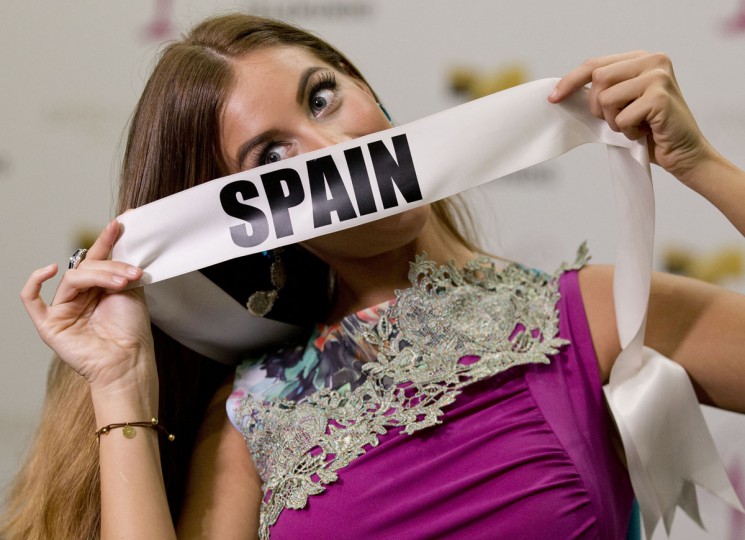 Miss Universe contestant Desire Cordero, of Spain, poses for a photo after a news conference for contestants from Latin America and Spain, Monday, Jan. 12, 2015, in Doral, Fla. (AP Photo/Wilfredo Lee) 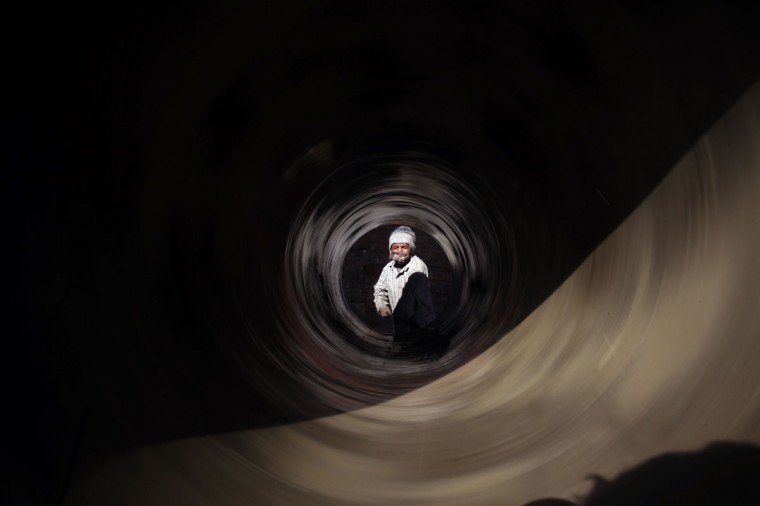 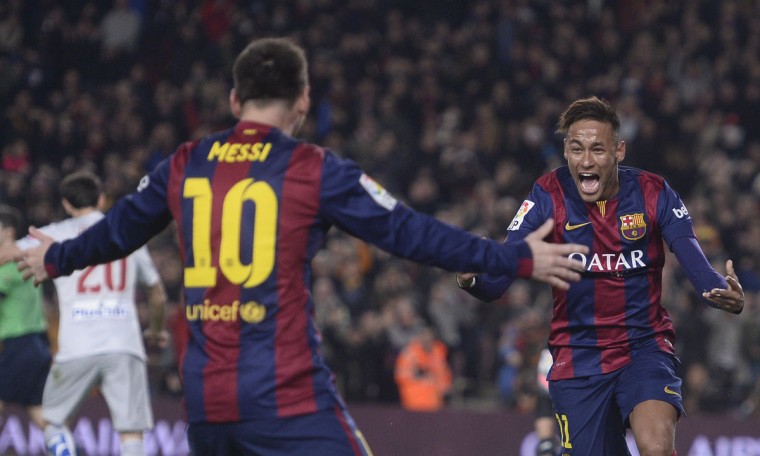 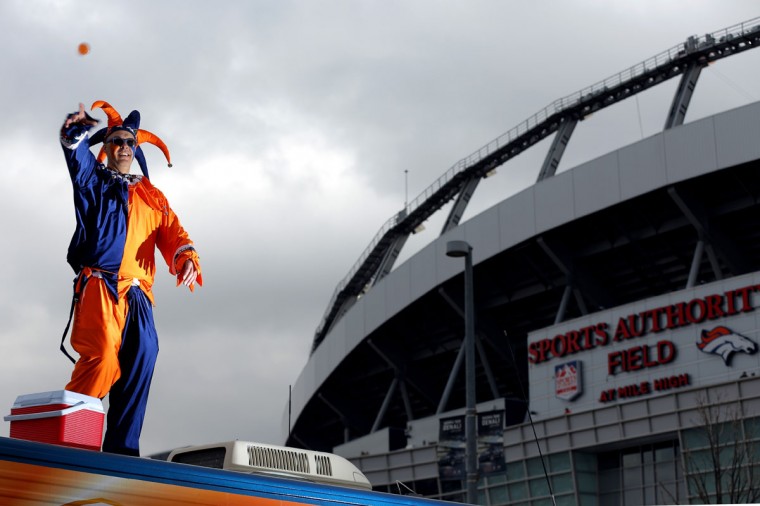 Denver Broncos fan Shane Hergenreder, of Denver, stands on top of his RV as he holds a tail gate party outside of the venue before a 2015 AFC Divisional Playoff game at Sports Authority Field at Mile High on January 11, 2015 in Denver, Colorado. (Photo by Justin Edmonds/Getty Images) 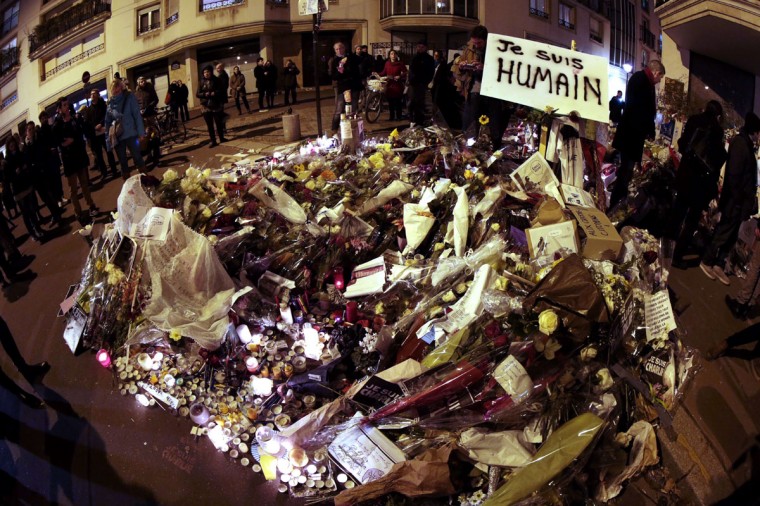 A placard reading “I am human” is seen on top of flowers at a makeshift memorial near the headquarters of the French satirical weekly Charlie Hebdo at the end of the unity rally “Marche Republicaine” on January 11, 2015 in Paris in tribute to the 17 victims of a three-day killing spree by homegrown Islamists. (JOEL SAGET/AFP/Getty Images)