A hostage situation in Paris, a candidate swap in Poland, election in Greece | Jan. 9 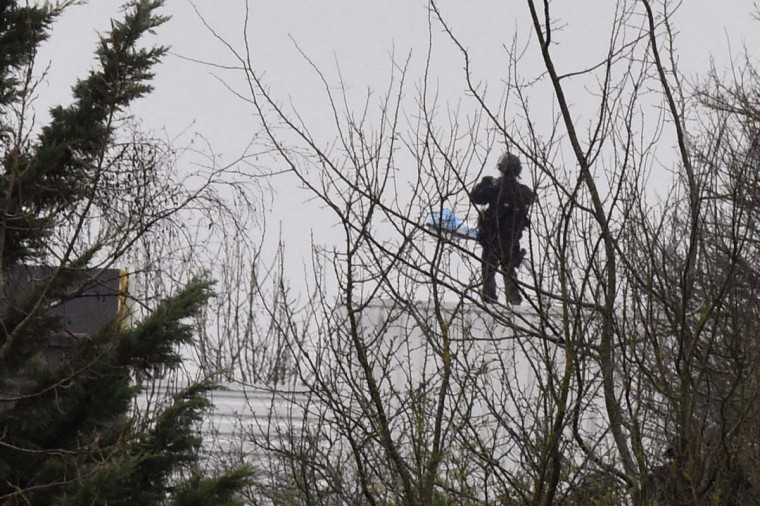 A French police officer stands on the roof of a building where two brothers suspected of slaughtering 12 people in an Islamist attack on French satirical newspaper Charlie Hebdo held one person hostage as police cornered the gunmen, in Dammartin-en-Goele, northeast of the capital, on January 9. The hostage drama unfolded at a printing business in the small town of Dammartin-en-Goele, only 12 kilometres (seven miles) from Paris’s main Charles de Gaulle airport, police sources said. || CREDIT: DOMINIQUE FAGET – AFP/GETTY IMAGES 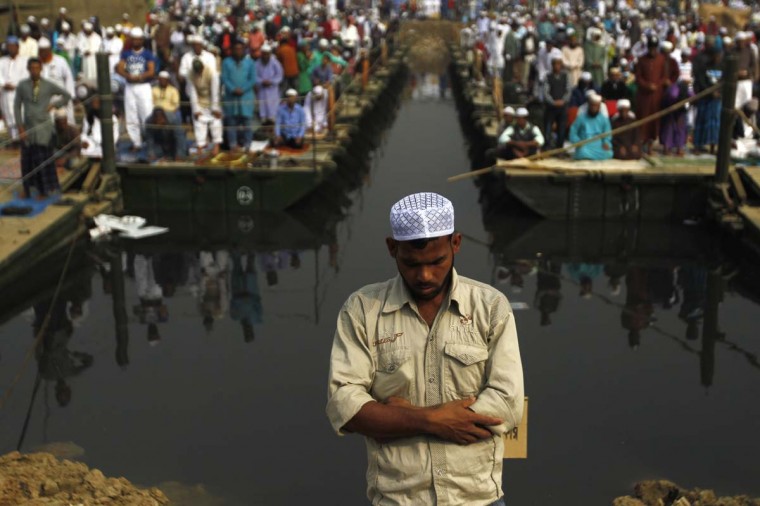 Muslim devotees offer noon prayers while attending the World Muslim Congregation, also known as Biswa Ijtema, at Tongi, on the outskirts of the Bangladesh capital Dhaka, on January 9. Muslims attending one of the world’s largest religious gatherings joined the chorus of condemnation January 9 over the deadly attack on a French satirical weekly, saying the killings ran contrary to the tenets of Islam. Bangladesh’s Biswa Ijtema, or World Muslim Congregation, is the world’s second largest Islamic gathering after the Hajj with devotees coming from all over the globe to pray and hear imams preach for three days. || CREDIT: HASAN RAJA – AFP/GETTY IMAGES 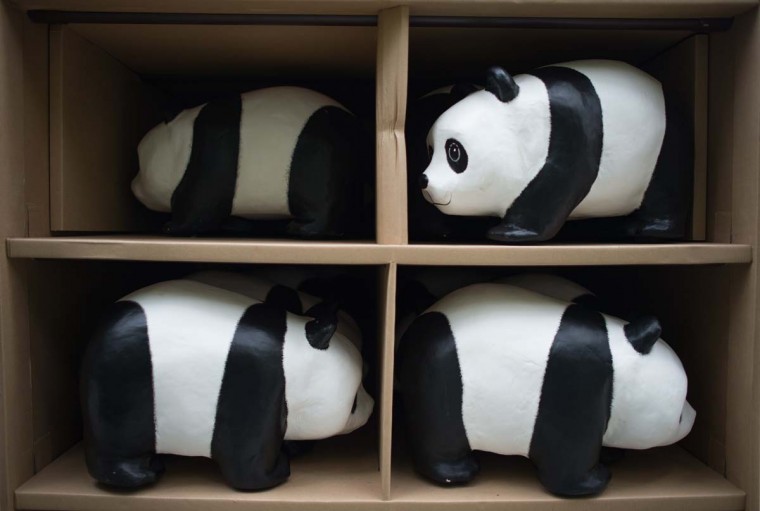 Papier-mache pandas are seen inside a storage box before being displayed at the National Monument in Kuala Lumpur on January 9. The event, consisting of placing 1,600 papier-mache pandas in various cities around the world, was created by French artist Paulo Grangeon in collaboration with the WWF and is aimed at raising awareness of the endangered species. || CREDIT: MOHD RASFAN – AFP/GETTY IMAGES 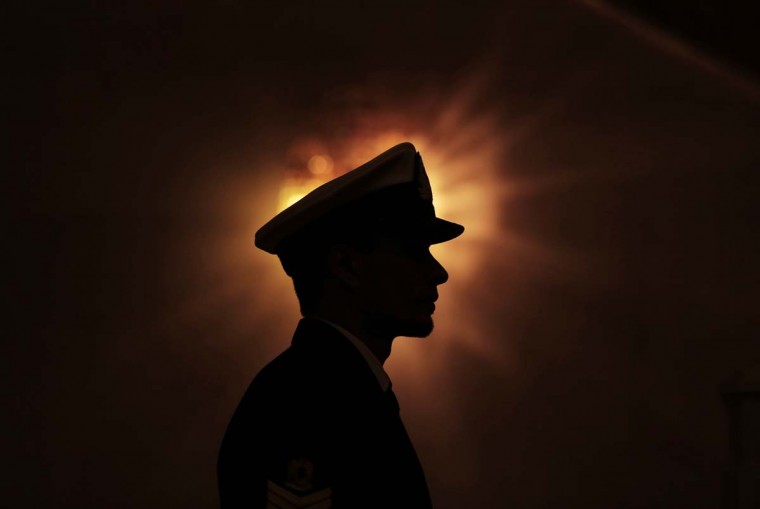 In this Jan. 9 photo, a Libyan honor guard stands at attention during the arrival of U.N. Special Envoy to Libya Bernardino Leon in Tripoli.(AP Photo/Mohammed Ben Khalifa) 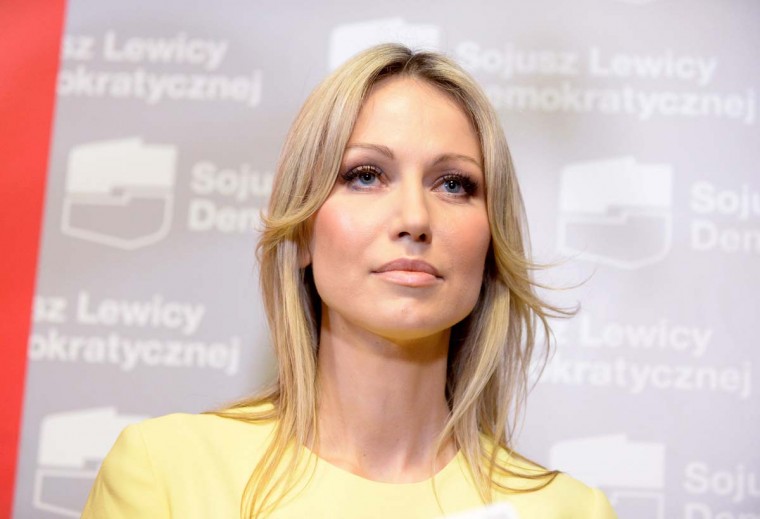 Democratic Left Alliance (SLD) presidential candidate Magdalena Ogorek is pictured at a press conference in Warsaw on January 9. The Polish Social Democratic SLD (opposition) party presented to the media on Friday 35-year-old Magdalena Ogorek as a surprise candidate for the presidential election in May, for which all survey predicted the victory of incumbent President Bronislaw Komorowski. MARCIN OBARA – AFP/GETTY IMAGES 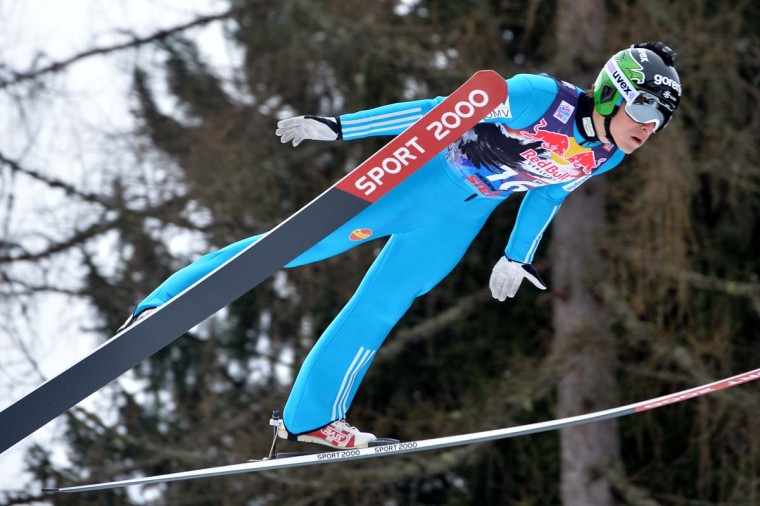 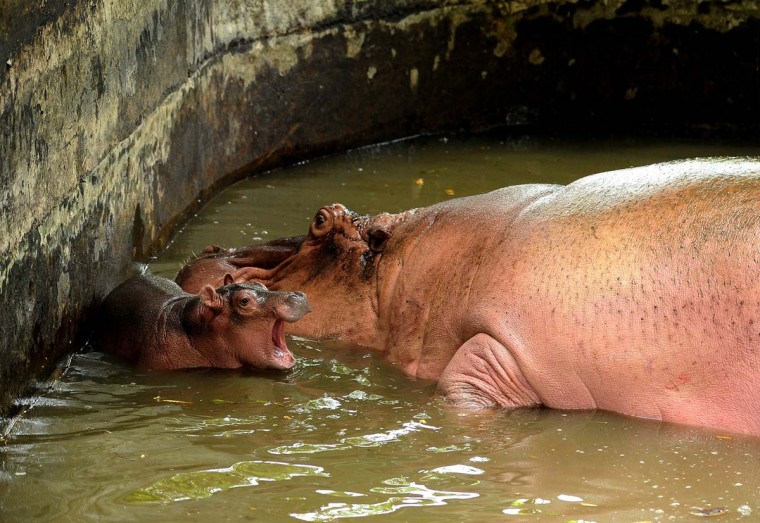 A baby Hippo playes with her mother, Agustina in the water at Surabaya Zoo on January 9 in Surabaya, Indonesia. In the midst of prolonged internal management conflict over the treatment of animals, Surabaya Zoo starts the new year cheerfully with the presence of two new members, a baby Hog Bawean deer (Axis kuhlii) on January 1 and a baby Hippo (Hippopotamus amphibius) on January 2. (Photo by Robertus Pudyanto/Getty Images) 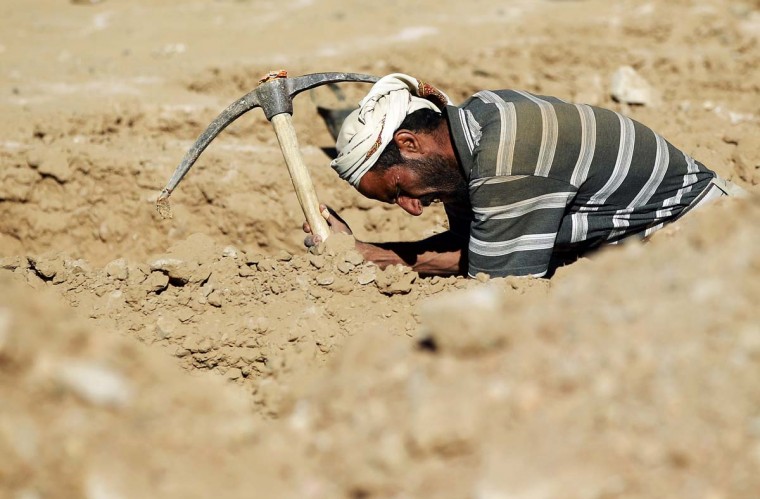 A Yemeni man digs graves ahead of a funeral for policemen that were killed Wednesday in car bomb explosion outside a police academy in Sanaa on January 9. Five people suspected of involvement in a bombing against the police academy in Sanaa, which killed 40 people and wounded 71 were arrested, said General Abdel Razak al-Moayed the police chief of the Yemeni capital. || CREDIT: MOHAMMED HUWAIS – AFP/GETTY IMAGES 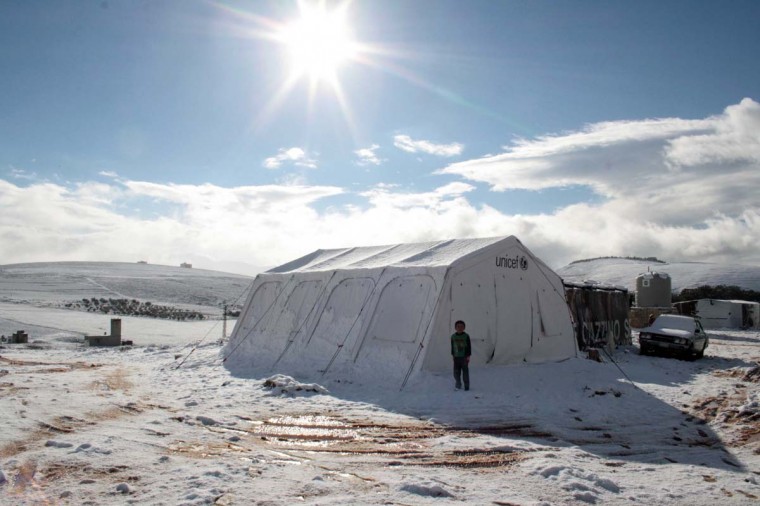 A child stands outside a tent on January 9 at a Syrian refugee camp covered with snow in Marj al-Khawkh, on the outskirts of the southern Lebanese town of Marjayoun. Two Syrians, a man and a six-year-old boy, were found dead on January 7 in Ain al-Joz in the mountains by Shebaa, as a major storm hit the Middle East, bringing misery to thousands of Syrian refugees living in makeshift camps throughout Lebanon. || CREDIT: ALI DIA – AFP/GETTY IMAGES 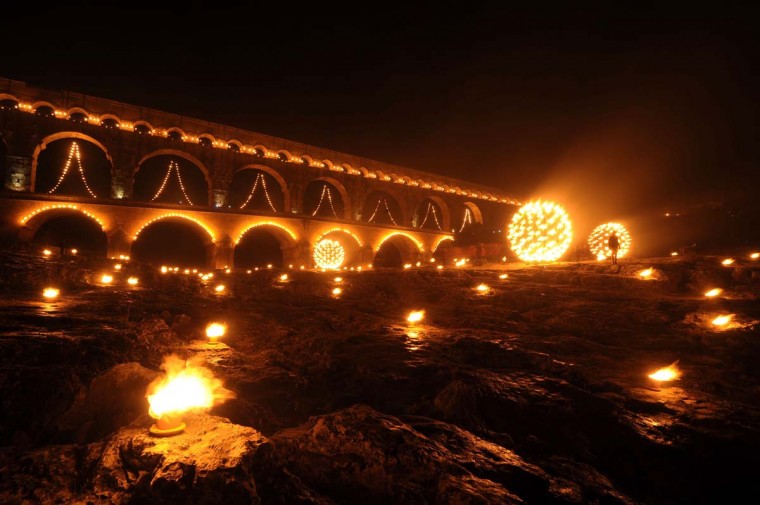 People gather in front of the Pont du Gard decorated with lights during the ‘Nuit des Lucioles’, an event to celebrate the 30th anniversary of the Roman aqueduct registration as a UNESCO World Heritage Site on January 8, 2015 in Vers-Pont-du-Gard, southern France. || CREDIT: SYLVAIN THOMAS – AFP/GETTY IMAGES 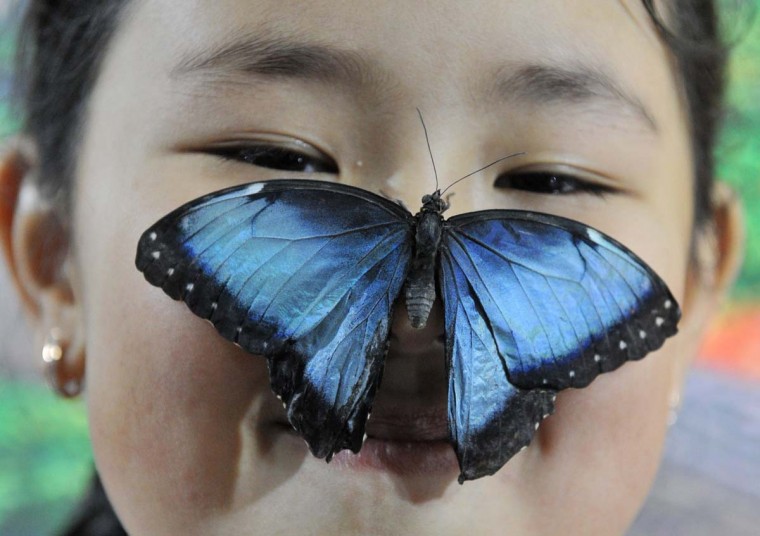 A butterfly lands on the nose of a girl during a butterflies exhibition in Bishkek on January 9, 2015. || CREDIT: VYACHESLAV OSELEDKO. – AFP/GETTY IMAGES 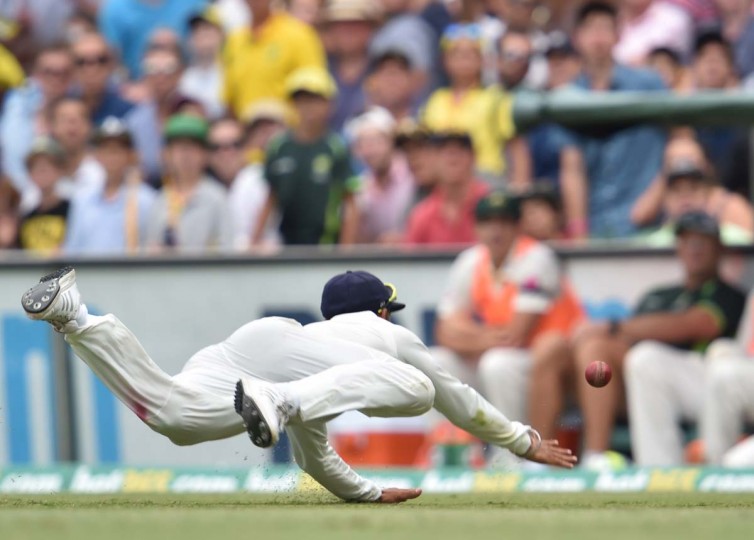 India’s captain Virat Kohli dives to save a boundary during day four of the fourth cricket Test between Australia and India at the Sydney Cricket Ground (SCG) on January 9, 2015. || CREDIT: PETER PARKS – AFP/GETTY IMAGES 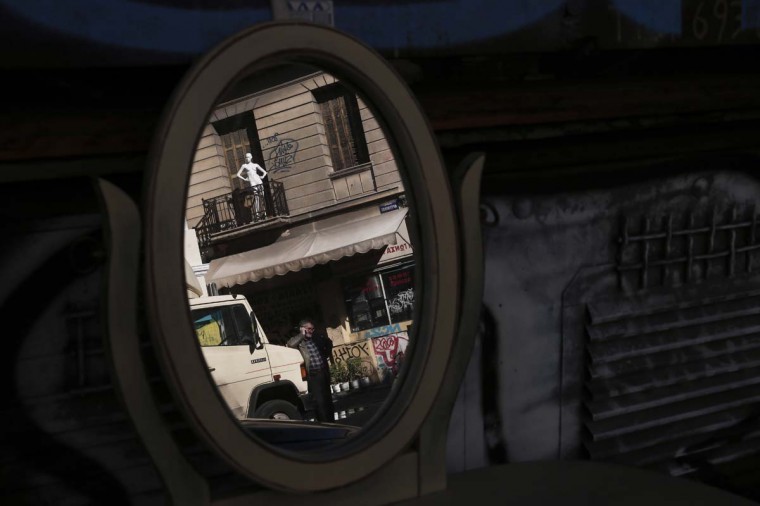 Viewed in a reflection of a mirror for sale, a man speaks on his mobile phone as a mannequin stands on a balcony of an old building, in central Athens, Friday, Jan. 9. Greeks go to the polls to elect a new Parliament on Jan. 25, in an early snap general election triggered after lawmakers failed to agree on who will replace the country’s president when his 5-year tenure expires in March. The elections, which the left-wing opposition Syriza party is tipped to win, albeit without enough votes to govern alone, come as the bailed-out country is edging out of a crippling six-year recession. (AP Photo/Petros Giannakouris) 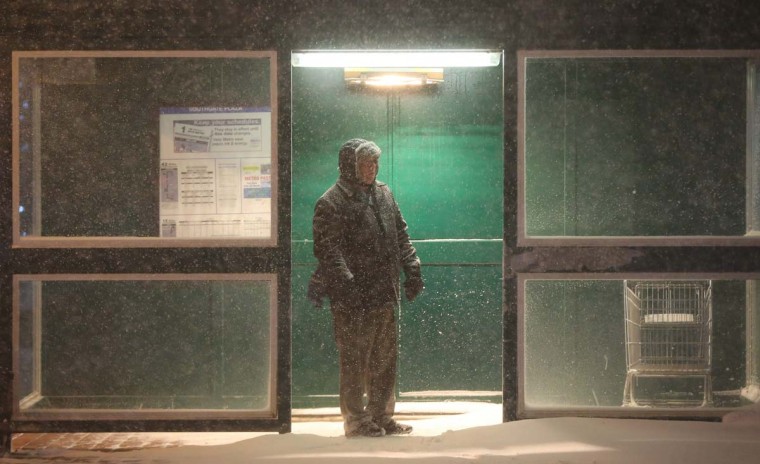 Rodney Montgomery waits for a bus at the South Gate Plaza in West Seneca, N.Y. on Friday, Jan. 9. Lake-effect snow and high winds are causing hazardous driving conditions across western New York, where a section of Interstate 190 and other Buffalo-area highways remain closed Friday morning. The National Weather Service says sections of western New York along Lake Erie could get up to 3 inches of snow per hour during Friday’s storms. (AP Photo/The Buffalo News, Mark Mulville) 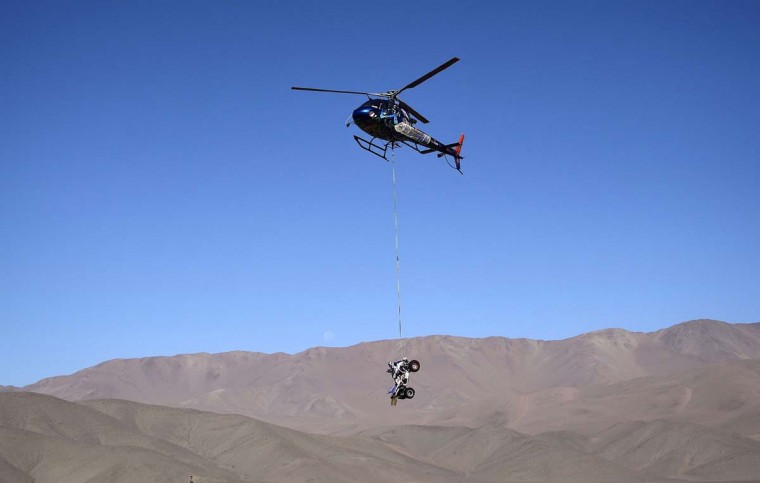 A helicopter lifts a quad before the Stage 5 of the Dakar 2015 between Copiapo and Antofogasta, Chile, on January 8. FRANCK FIFEFRANCK FIFE – AFP/GETTY IMAGES 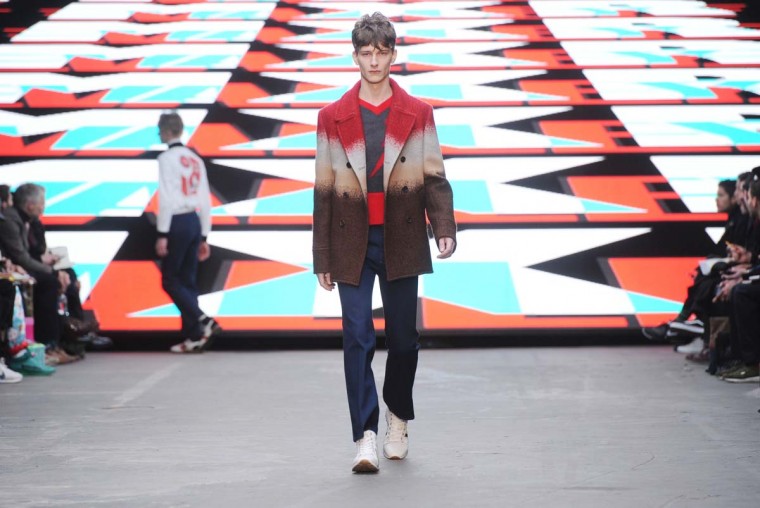 Models walk the runway during the TOPMAN Design show at the London Collections: Men AW15 at The Old Sorting Office on January 9 in London, England. (Photo by Stuart C. Wilson/Getty Images) 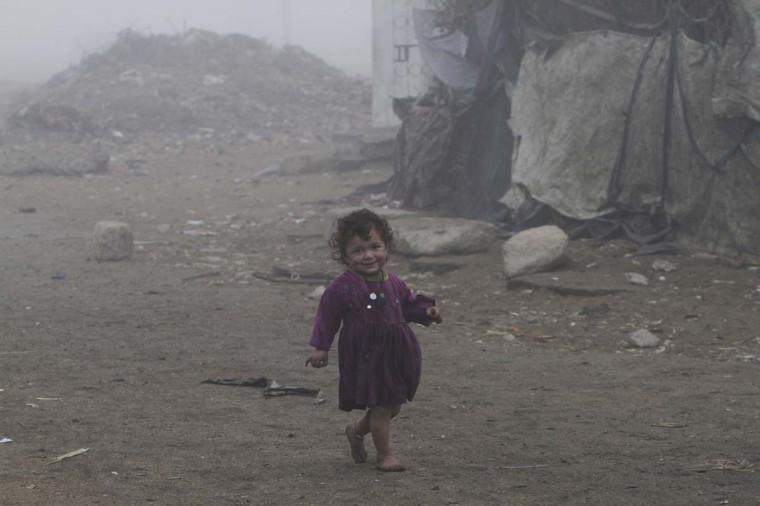 An Afghan refugee girl strolls outside her home amid a thick fog that blanketed suburbs of Karachi, Pakistan, Friday, Jan. 9. Some parts of Pakistan are facing harsh winter. (AP Photo/Fareed Khan) 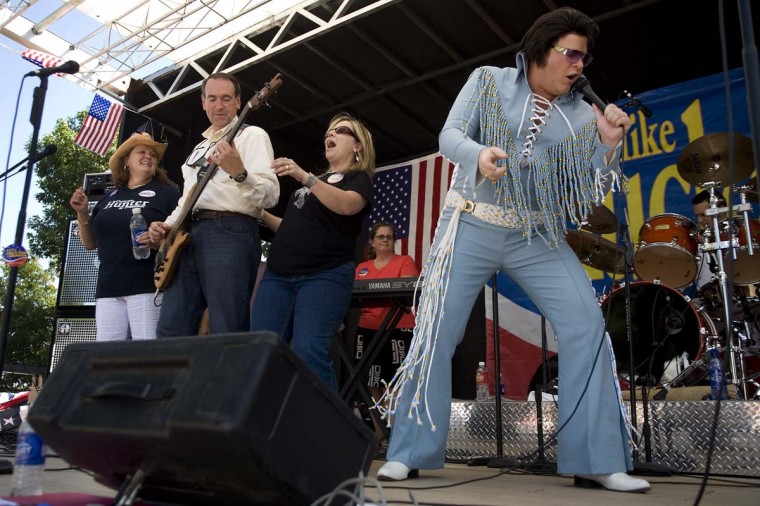 In this Aug. 11, 2007, file photo, presidential hopeful and former Arkansas Gov. Mike Huckabee, second from left, plays with his band, Capital Offense, as an Elvis impersonator from Duncan Hunter’s campaign helps out with a rendition of Johnny-Be-Good at the Iowa Straw Poll in Ames, Iowa. The leaders of the Iowa Republican Party are set to meet Jan. 10 in Iowa, to decide whether to hold the increasingly controversial Straw Poll. Many top Republicans, including Gov. Terry Branstad, oppose the event, decrying it as an expensive sideshow, but it appears the party is likely to keep it in place. (AP Photo/David Lienemann, File) 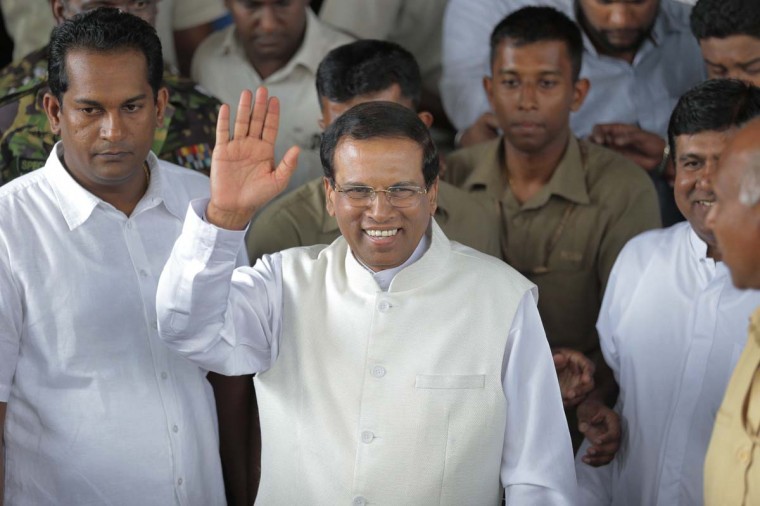 Sri Lanka incoming President Maithripala Sirisena waves to supporters as he leaves the election secretariat in Colombo, Sri Lanka, Friday, Jan. 9. In a stunning election result that was unthinkable just weeks ago, Sri Lanka’s longtime president acknowledged Friday that he had been defeated by a onetime political ally, signaling the fall of a family dynasty and the rise of former Cabinet minister Sirisena. (AP Photo/Eranga Jayawardena)