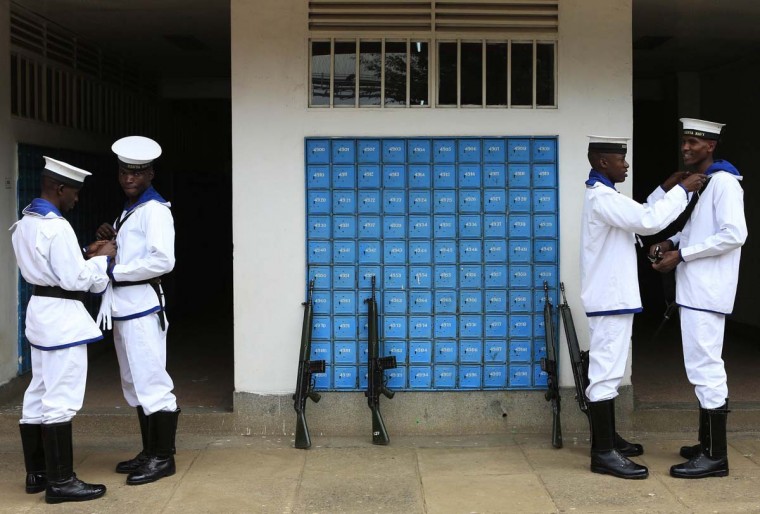 Soldiers from the Kenya Navy prepare their attire shortly before taking part in a military parade during the national celebration to mark Kenya’s Jamhuri Day (Independence Day) at the Nyayo Stadium in Nairobi December 12. Kenya marks 51 years of independence from Britain. || PHOTO CREDIT: NOOR KHAMIS – REUTERS 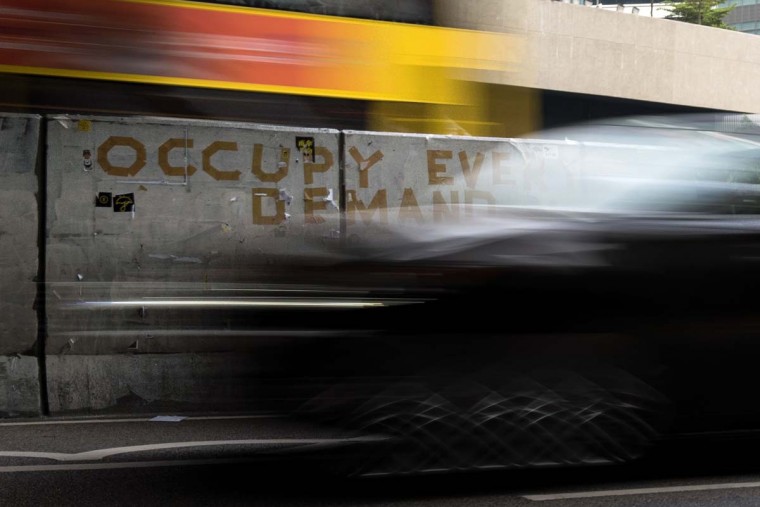 This long exposure photograph shows traffic driving past a message from the pro-democracy Occupy movement in the Admiralty district of Hong Kong on December 12. Rush-hour traffic streamed through the heart of Hong Kong for the first time in more than two months on December 12 after police cleared the city’s main pro-democracy protest camp with mass arrests — but activists vowed that their struggle would go on. || CREDIT: ALEX OGLE – AFP/GETTY IMAGES 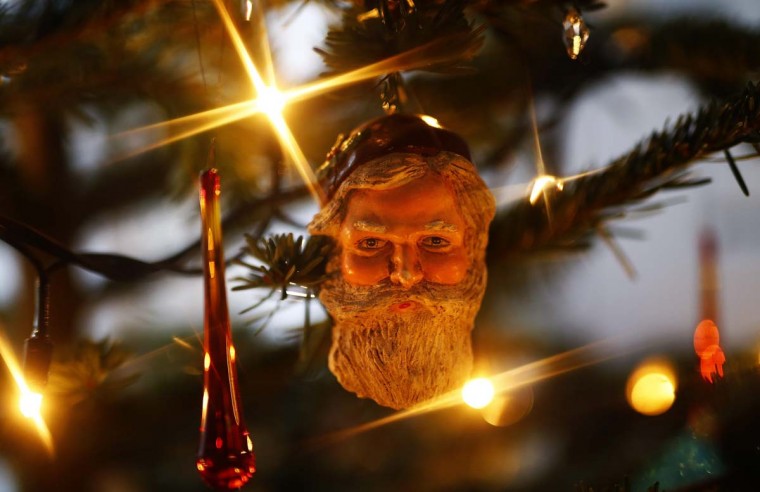 A view shows decorations on a Christmas tree in a house in Hanau December 12. || PHOTO CREDIT: KAI PFAFFENBACH – REUTERS 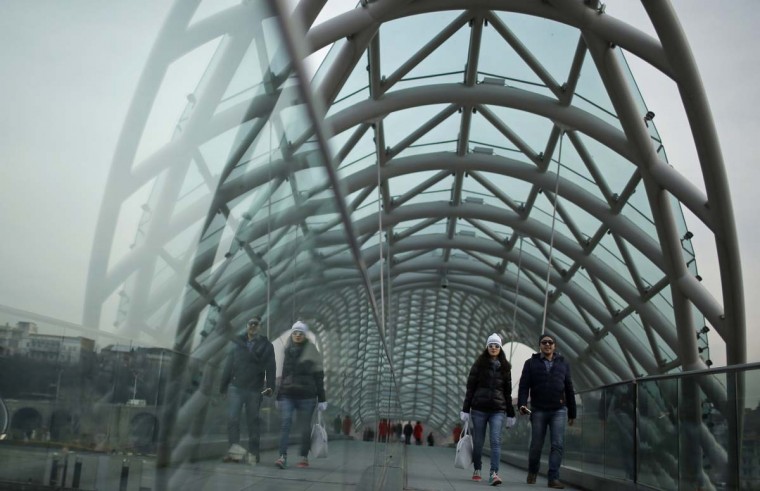 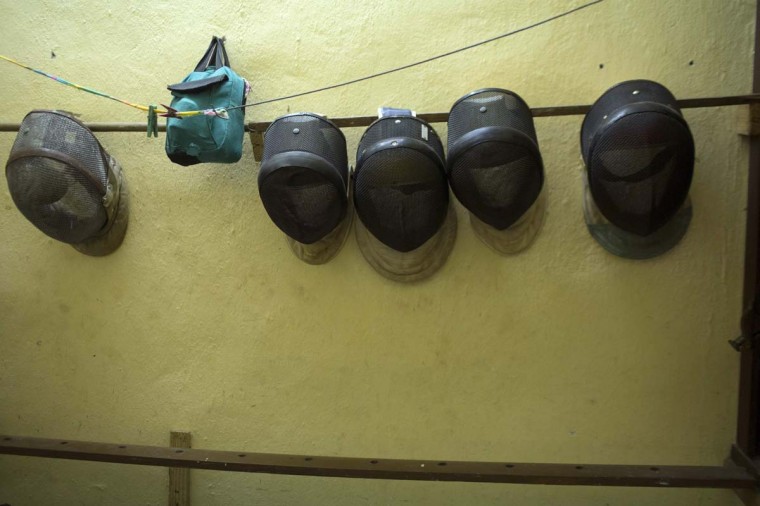 Fencing masks are seen at the “Martyrs of Barbados” fencing gymnasium in downtown Havana, November 26. About 100 students train at the gymnasium, which was named after 73 Cuban fencers, known as the “Martyrs of Barbados”, who were killed in a 1976 attack when a bomb blew up a Cubana airliner in Barbados. Picture taken November 26, 2014. || PHOTO CREDIT: ALEXANDRE MENEGHINI – REUTERS 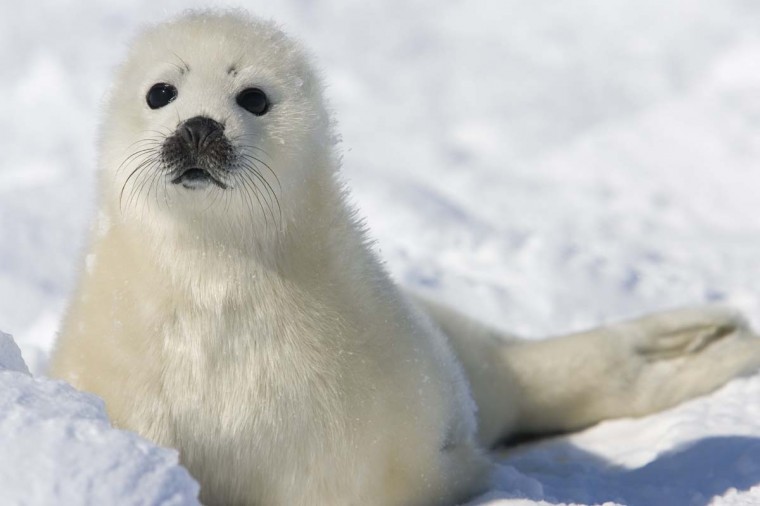 A pup harp seal watches on the ice floes on March 3, 2008, off the coast of the Magdalen Islands, Quebec a few weeks before the annual seal hunt. Norway’s parliament has voted to scrap a controversial subsidy for seal hunting, potentially spelling the end of the much-criticised activity, a lawmaker told AFP on December 12, 2014. || CREDIT: DAVID BOILY – AFP/GETTY IMAGES 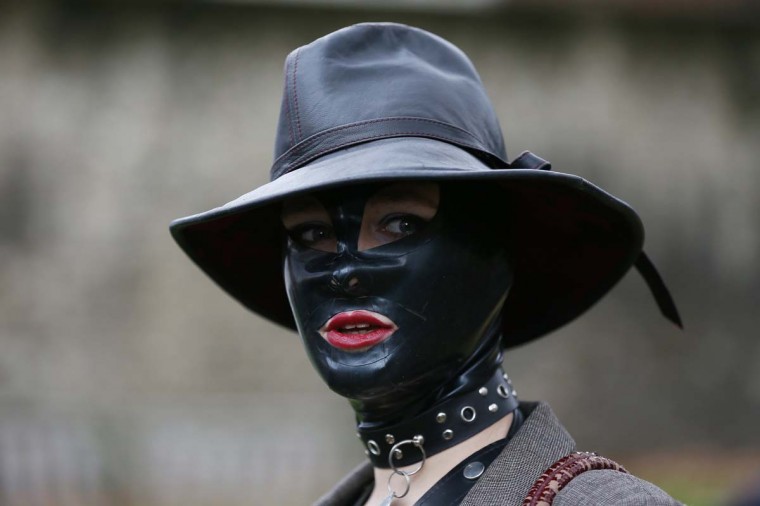 A protester takes part in a demonstration against new laws on pornography outside parliament in central London December 12. || PHOTO CREDIT: STEFAN WERMUTH – REUTERS 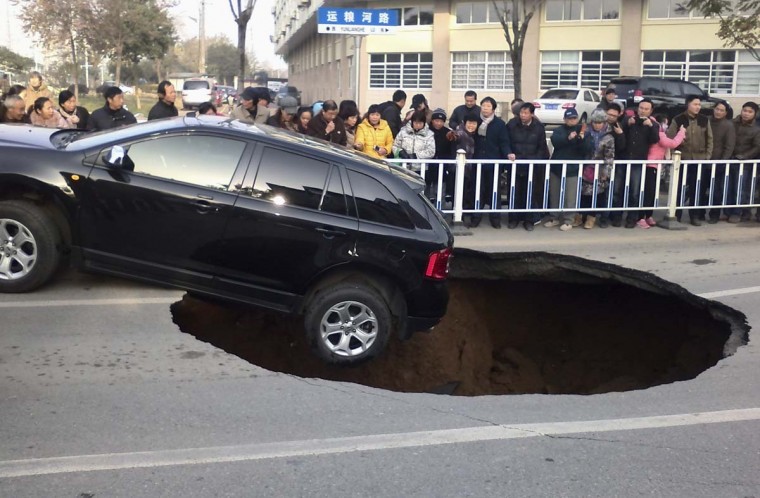 People look at a car hanging on the edge of a caved-in area on a street in Zhenjiang, Jiangsu province December 12. The street collapsed on Friday morning as the car drove by and formed the pit measuring 2m (6.7ft) in depth and 5m (16.4ft) in diametre, according to local media. || PHOTO CREDIT: STRINGER – REUTERS 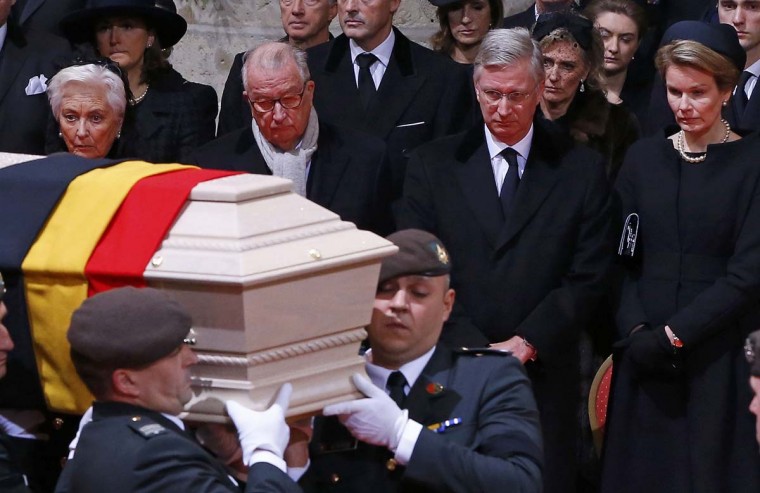 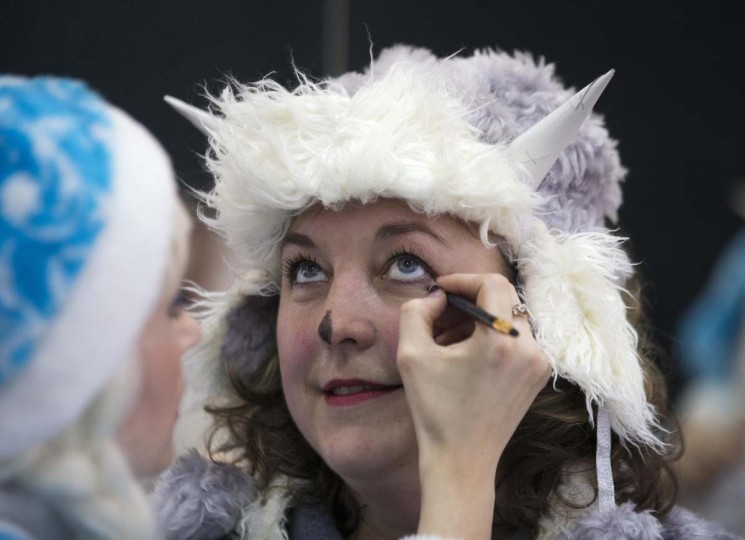 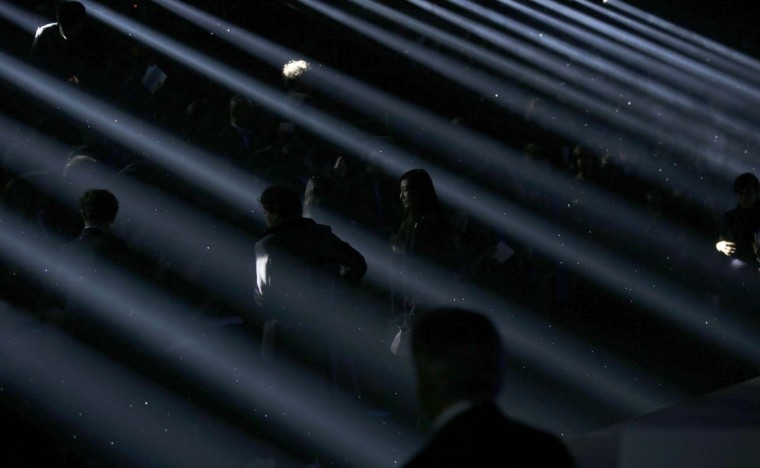 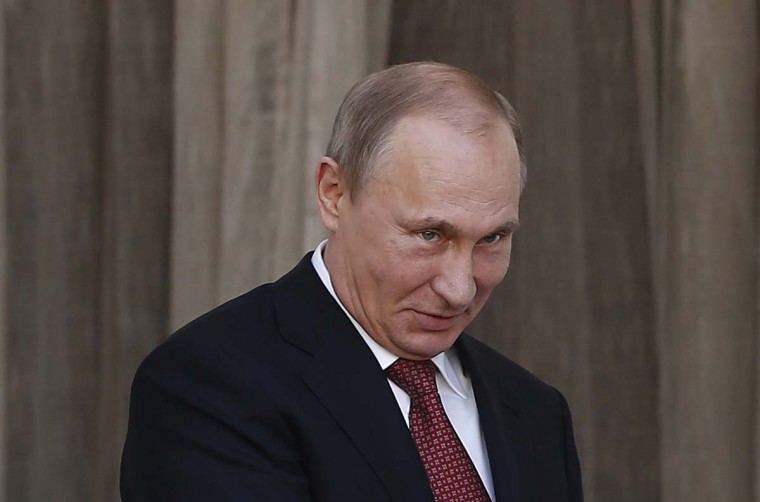 Russian President Vladimir Putin reacts during a photo opportunity with India’s Prime Minister Narendra Modi ahead of their meeting at Hyderabad House in New Delhi December 11. Russian President Putin visited India on Thursday in an attempt to revive a historic friendship that has faded over the years, seeking to improve cooperation in energy, defense and nuclear power. || PHOTO CREDIT: ADNAN ABIDI – REUTERS 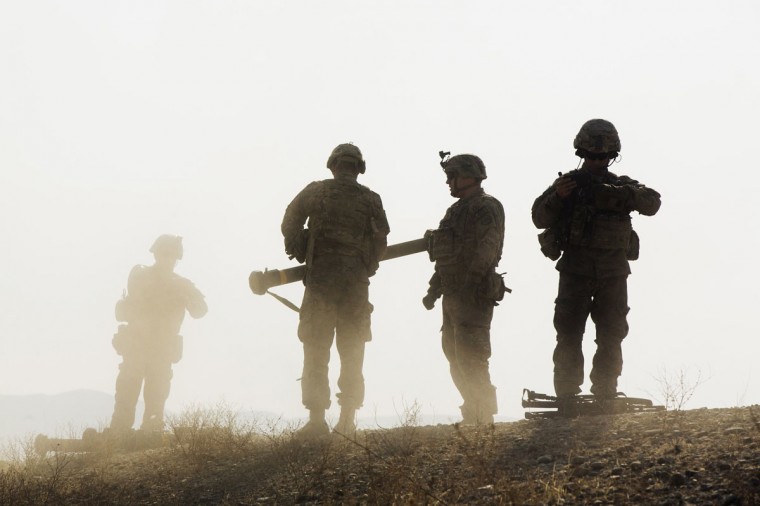 A U.S. soldier from the 3rd Cavalry Regiment prepares his Mine-Resistant Ambush Protected (MRAP) vehicle for a mission on forward operating base Gamberi in the Laghman province of Afghanistan December 12. || PHOTO CREDIT: LUCAS JACKSON – REUTERS 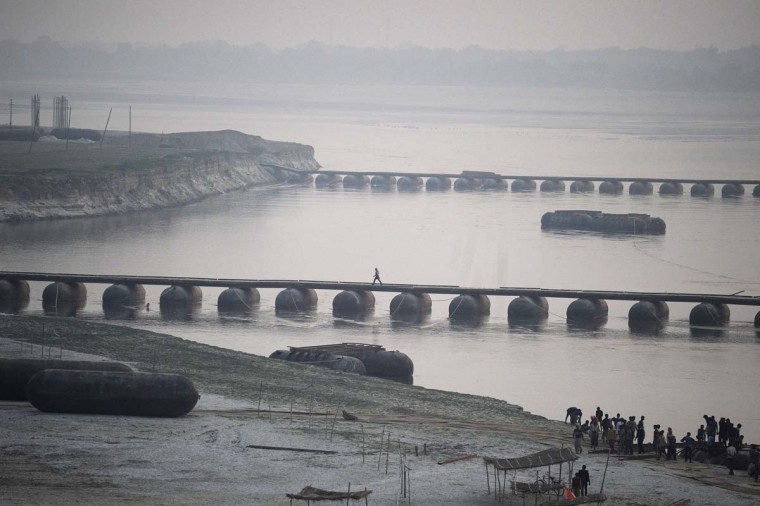 An Indian labourer crosses a newly constructed temporary pantoon bridge, installed for the Magh Mela festival, on the River Ganges in Allahabad on December 12. Magh Mela is an important annual Hindu ritual held on the banks of the Sangam in Allahabad. || CREDIT: SANJAY KANOJIA – AFP/GETTY IMAGES 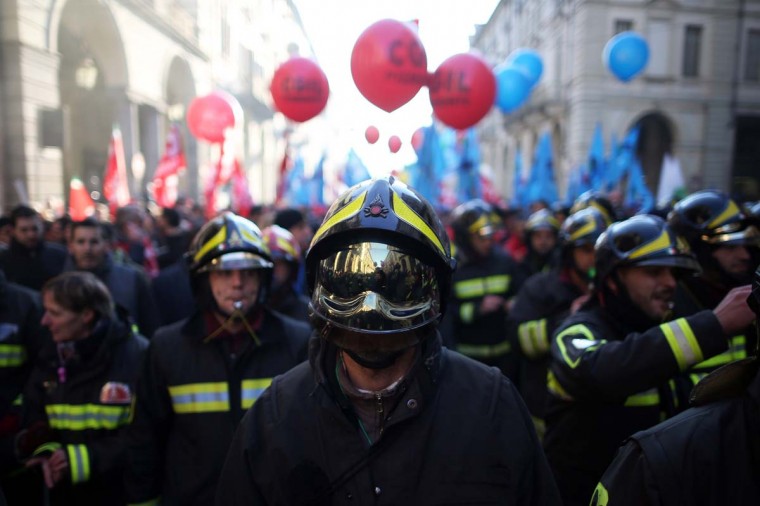 Firefighters march in downtown Turin on December 12, during an eight-hour strike called by the CGIL and UIL unions to protest against measures contained in the 2015 budget bill and against Italian Prime minister Matteo Renzi’s government controversial Jobs Act, which they say threatens employment and workers’ rights. || CREDIT: MARCO BERTORELLO – AFP/GETTY IMAGES 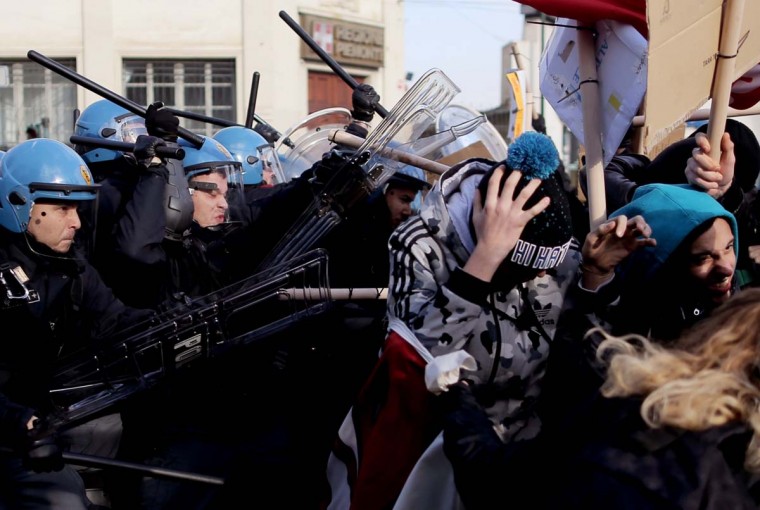 Italian protesters run for cover as clashes erupt with police in downtown Turin on December 12, during an eight-hour strike called by the Italian General Confederation of Labour (CGIL) and the Italian Labour Union (UIL). Tens of thousands of Italians took to the streets in boisterous protests against government policies. || CREDIT: MARCO BERTORELLO – AFP/GETTY IMAGES 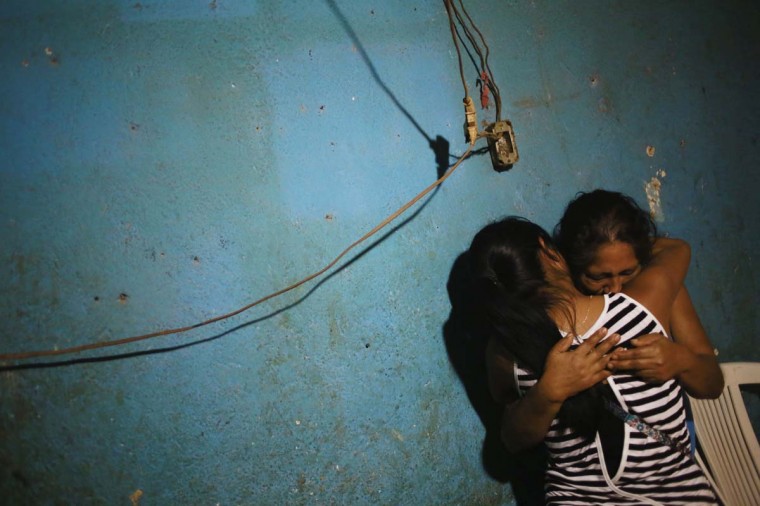 Women embrace in the house of Alexander Mora Venancio, one of the 43 missing students of Ayotzinapa Teacher Training College Raul Isidro Burgo, in El Pericon, in the southern Mexican state of Guerrero, December 11. Mexican authorities on Sunday said mounting evidence and initial DNA tests confirmed that 43 trainee teachers who were abducted by corrupt police 10 weeks ago were incinerated at a garbage dump by drug gang members. Forensics identified on September 7 the remains of Alexander Mora Venancio. || PHOTO CREDIT: JORGE DAN LOPEZ – REUTERS 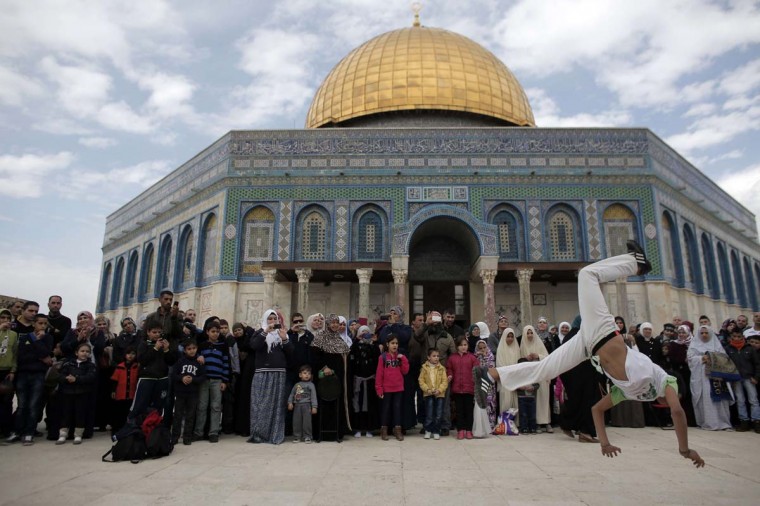 A Palestinian youth pratices parkour infront of a crowd outside the Dome of the Rock mosque at the Al-Aqsa mosque compound following Friday prayers in the Old City of Jerusalem on December 12. A Palestinian threw acid at a group of Israelis in the southern West Bank before being shot and wounded, the army said. || CREDIT: AHMAD GHARABLI – AFP/GETTY IMAGES 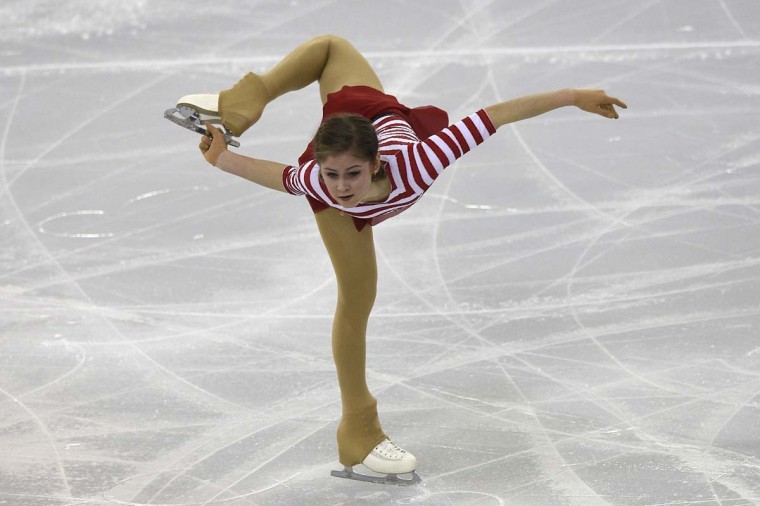 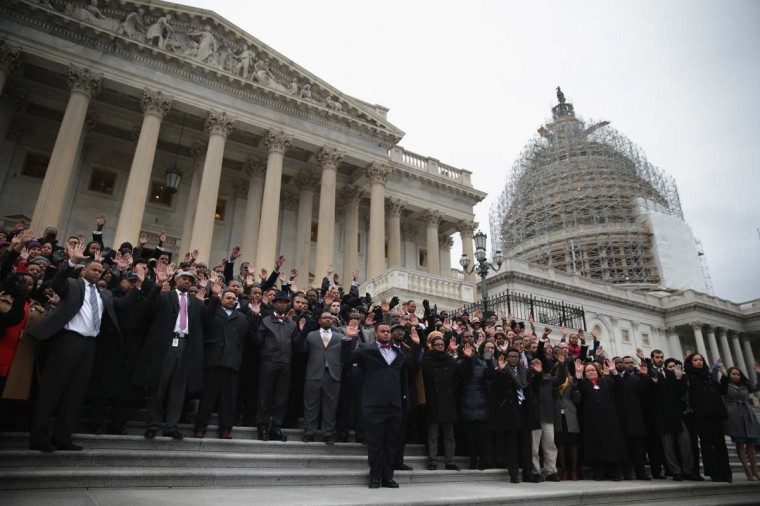 Black congressional staffers hold their hands up as they pose for a group photo during a walkout December 11, on the steps of the U.S. Capitol in Washington, DC. The staffers staged a walkout to protest over the recent Mike Brown and Eric Garner grand jury decisions. Photo by Alex Wong/Getty Images 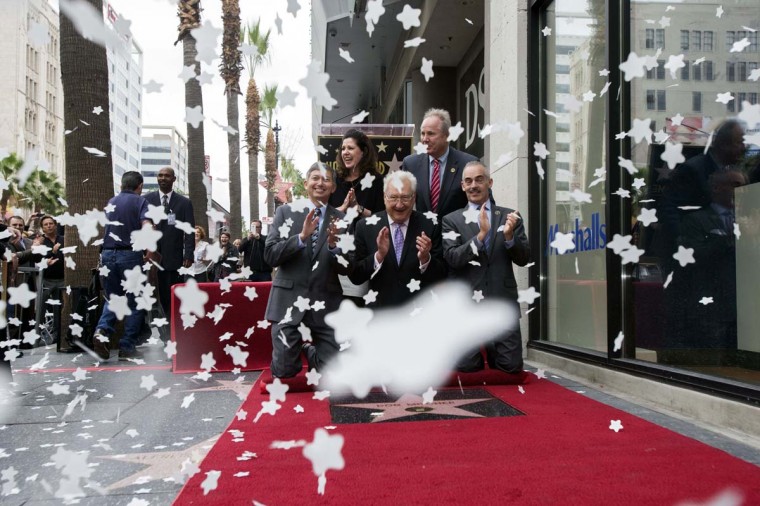 Producer and director Don Mischer (C) unveils his star, as confetti fly, with other guests on the Walk of Fame in Los Angeles, California December 11. || PHOTO CREDIT: MARIO ANZUONI – REUTERS 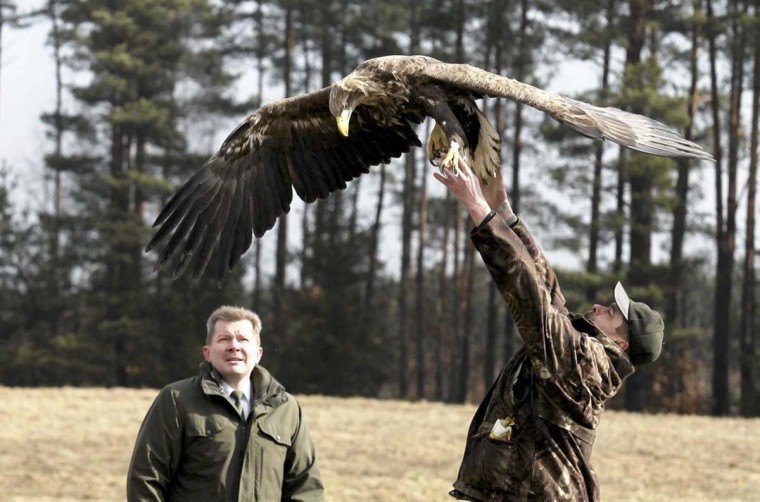 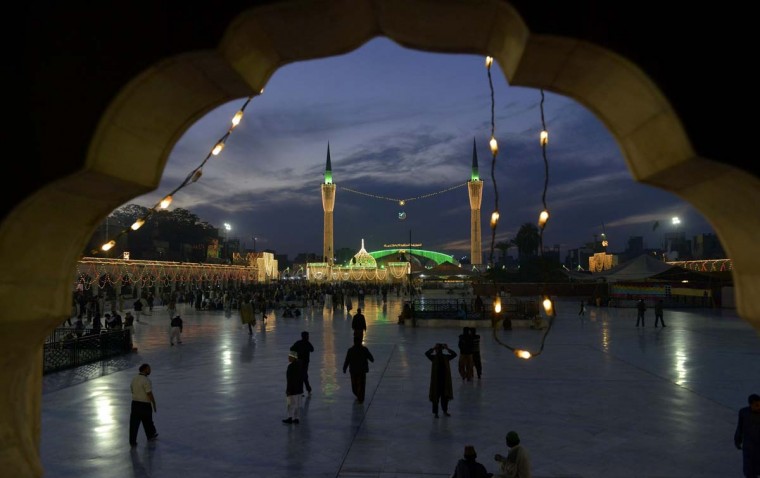 Pakistani Muslim devotees gather at the shrine of Sufi Saint Syed Ali bin Osman Al-Hajvery, popularly known as Data Ganj Bakhsh, during the annual ”Urs” religious festival in Lahore on December 11. Data Ganj Bakhsh was a Persian Sufi and scholar during the 11th century. He was born in Ghazni, Afghanistan (990 AD) during the Ghaznavid Empire and settled and died in Lahore spreading Islam in South Asia. During the festival the shrine is lit up with candles and lights, donated food is prepared for the people and Sufis dance and play music for hours. || CREDIT: ARIF ALI – AFP/GETTY IMAGES 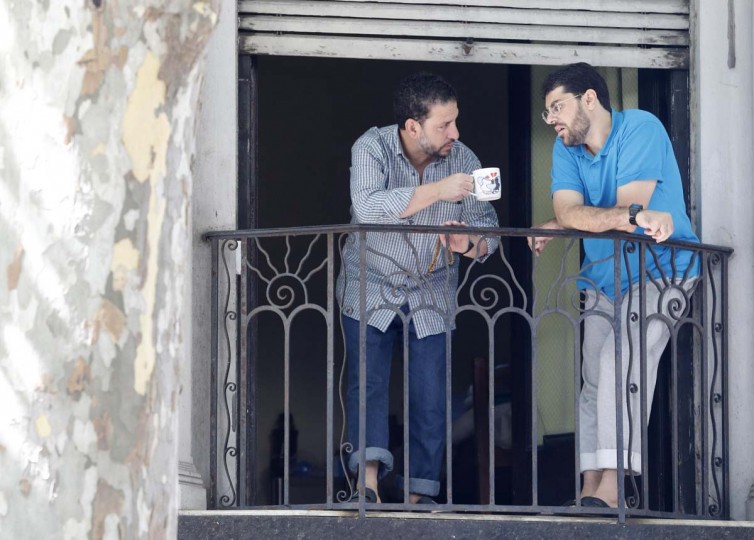 Former Guantanamo detainees Adel bin Muhammad El Ouerghi (L) from Tunisia and Omar Mahmoud Faraj from Syria talk on a balcony in a neighbourhood in Montevideo December 12. Six former Guantanamo detainees were flown to Uruguay for resettlement on Sunday, the latest step in a slow-moving push by U.S. President Barack Obama to close the widely-condemned prison where most detainees have never been charged or tried. The men were discharged Thursday from a hospital in Montevideo and transferred to a house provided by Uruguay’s central workers union Pit-Cnt. Uruguay will treat the six detainees it has taken in from the U.S. camp holding suspected terrorists in Guantanamo Bay as “totally free men” who do not represent any security threat, the defence minister told Reuters on Monday. || PHOTO CREDIT: ANDRES STAPFF – REUTERS