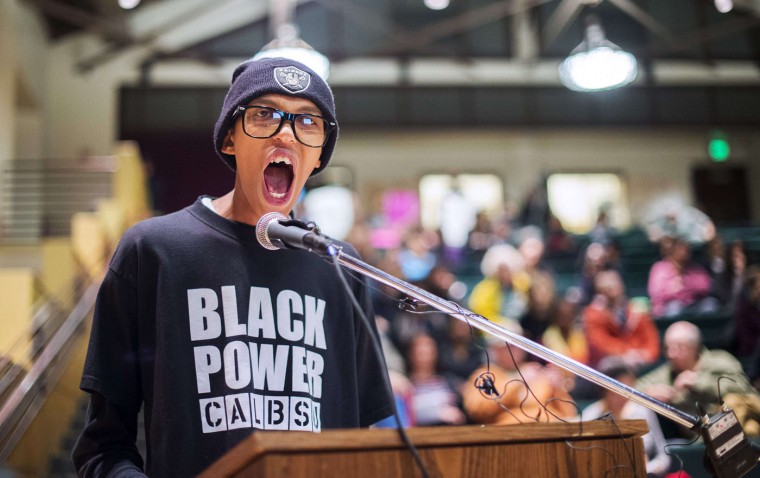 Kyle McCoy addresses the Berkeley City Council meeting in Berkeley, California December 16, 2014. Dozens of people spoke before the council to condemn police tactics, including teargas and non-lethal projectiles, used against anti-police brutality demonstrators on December 6. McCoy said he was arrested that night and faces a felony charge for assault with a deadly weapon. REUTERS/Noah Berger 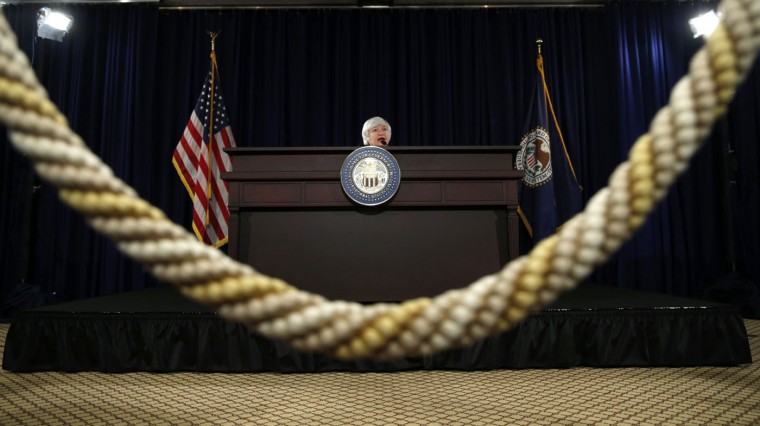 U.S. Federal Reserve Chair Janet Yellen speaks during a news conference at the Federal Reserve in Washington December 17, 2014. The Federal Reserve on Wednesday offered a strong signal that it was on track to raise interest rates sometime next year, altering a pledge to keep them near zero for a “considerable time” in a show of confidence in the U.S. economy. REUTERS/Kevin Lamarque 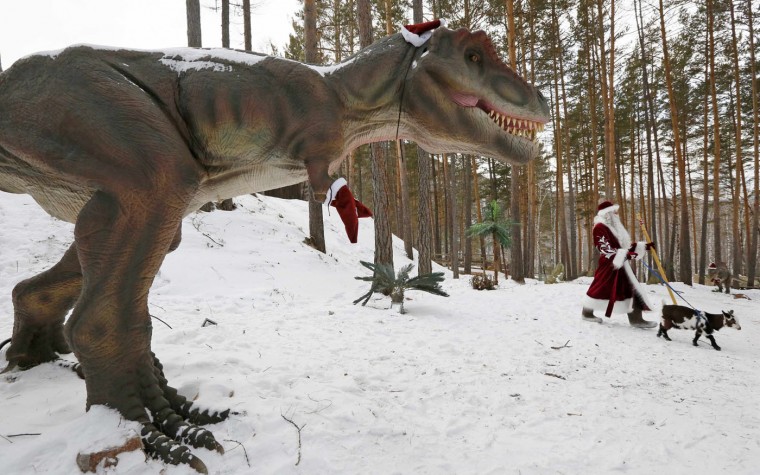 A man dressed as Father Frost, the Russian equivalent of Santa Claus, walks with Knopka, a Cameroon dwarf goat, through the “Dinosaurs Park”, located in the Taiga area at the Royev Ruchey zoo in the suburbs of Russia’s Siberian city of Krasnoyarsk, December 16, 2014. Picture taken December 16, 2014. REUTERS/Ilya Naymushin 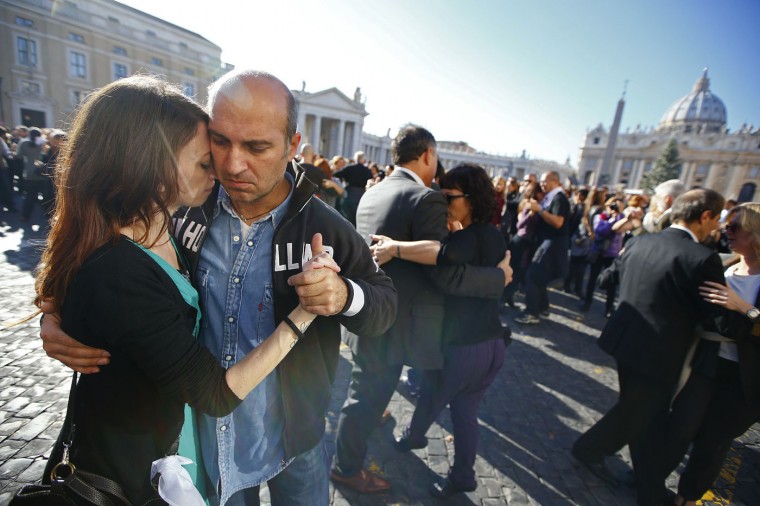 Couples dance in front of Saint Peter’s basilica at the Vatican December 17, 2014. Thousands of people sang “Happy Birthday” and danced a mass tango on Wednesday to celebrate the birthday of the first Latin American pope. Argentinian Pope Francis was born in the birthplace of the tango on Dec. 17, 1936. REUTERS/Tony Gentile 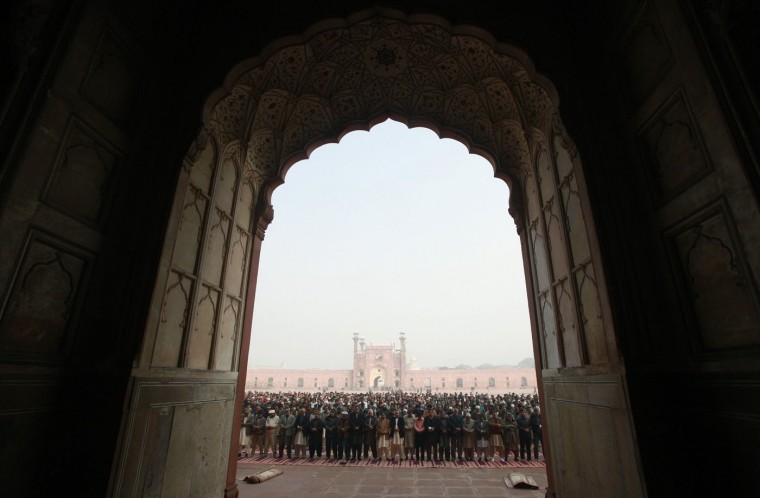 People hold funeral prayers for the victims of the Taliban attack on the Army Public School in Peshawar, at the Badshahi Mosque in Lahore, December 17, 2014. At least 132 students and nine staff members were killed on Tuesday when Taliban gunmen broke into the school and opened fire, witnesses said, in the bloodiest massacre the country has seen for years. REUTERS/Mohsin Raza 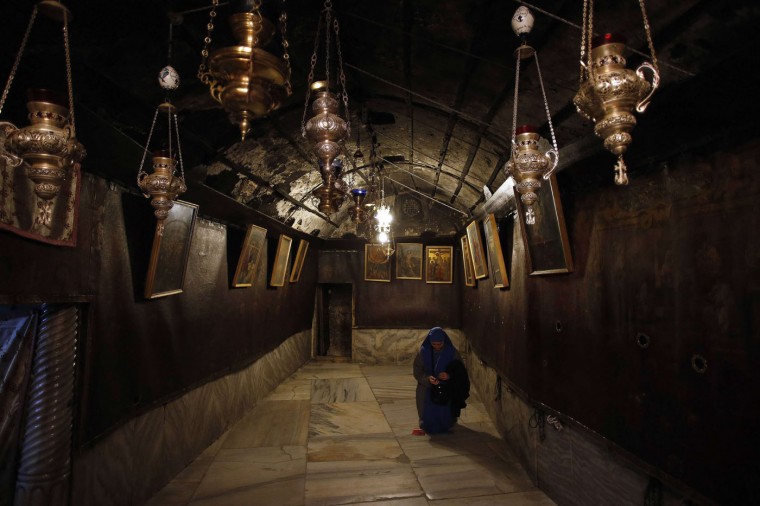 A Christian worshipper is seen inside the Grotto, where Christians believe Virgin Mary gave birth to Jesus, at the Church of Nativity ahead of Christmas in the West Bank town of Bethlehem December 17, 2014. REUTERS/Ammar Awad 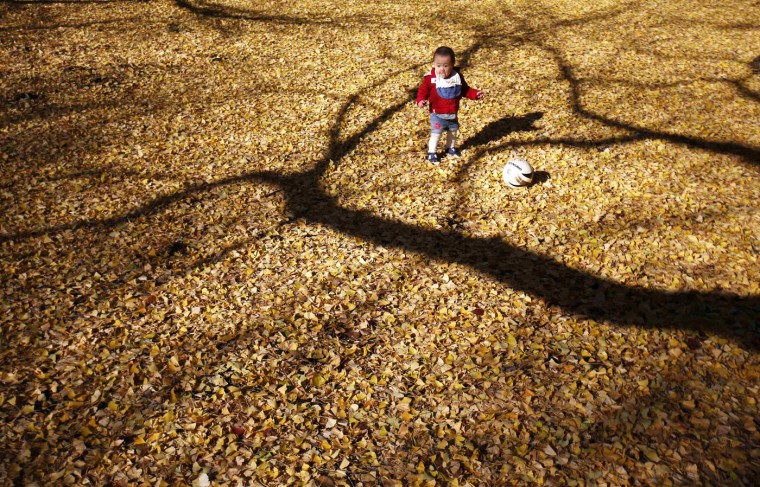 A child plays among ginkgo leaves at Yoyogi park, after a winter storm swept through the capital, in Tokyo December 17, 2014. A rapidly-strengthening winter storm slammed Japan’s northernmost main island of Hokkaido and a wide swathe of the nation with typhoon-strength winds and heavy snow on Wednesday, snarling rail transport and forcing the cancellation of more than 100 flights. REUTERS/Issei Kato 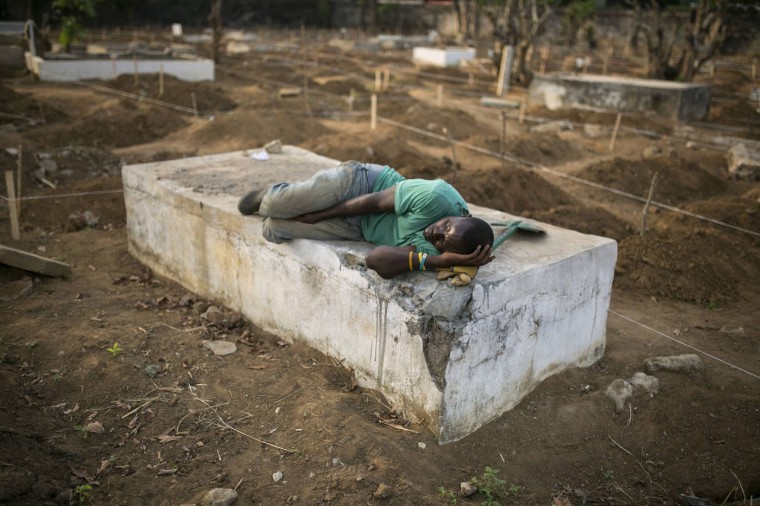 A grave digger sleeps near the graves of Ebola victims at a cemetery in Freetown, December 17, 2014. The death toll in the Ebola epidemic has risen to 6,915 out of 18,603 cases as of Dec. 14, the World Health Organization (WHO) said on Wednesday. There are signs that the increase in incidence in Sierra Leone has slowed, although 327 new cases were confirmed there in the past week, including 125 in the capital Freetown, the WHO said in its latest update. REUTERS/Baz Ratner 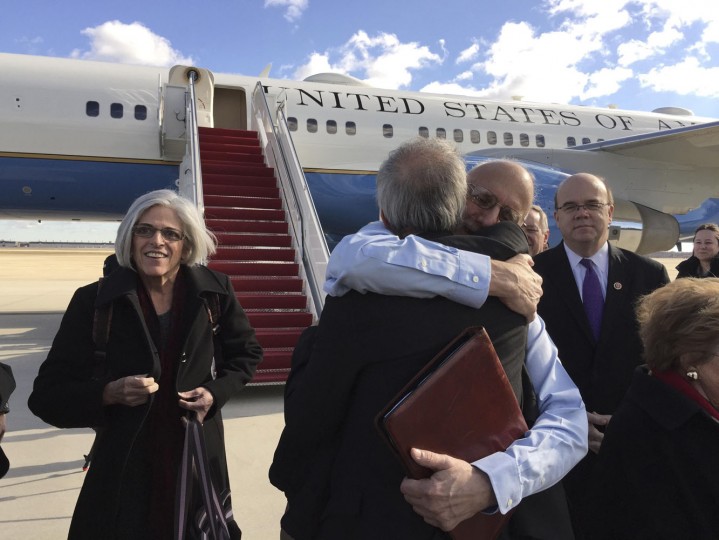 Alan Gross embraces Tim Rieser (C, back to camera), a member of Senator Patrick Leahy’s office, on the tarmac as he disembarks from a U.S. government plane with wife Judy (L) at Joint Base Andrews in Maryland outside Washington December 17, 2014 in this photo courtesy of Jill Zuckman. The United States plans to restore diplomatic relations with Cuba more than 50 years after they were severed, a major policy shift after decades of hostile ties with the communist-ruled island, President Barack Obama said on Wednesday. Obama discussed the changes with Cuban President Raul Castro on Tuesday in a telephone call that lasted nearly an hour. Castro spoke in Cuba as Obama made his announcement on a policy shift made possible by the release of American Alan Gross, 65, who had been imprisoned in Cuba for five years. REUTERS/Jill Zuckman/Gross Family spokesperson/Handout via Reuters 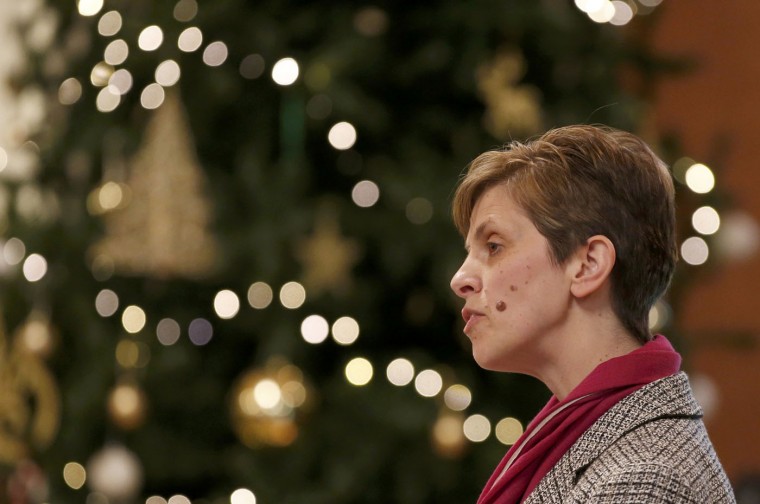 Libby Lane, a suffragan (Assistant) bishop in the Diocese of Chester, speaks after her forthcoming appointment as the new Bishop of Stockport was announced in the Town Hall in Stockport, northern England December 17, 2014. On her appointment, Lane will become the Church of England’s first female bishop. REUTERS/Phil Noble 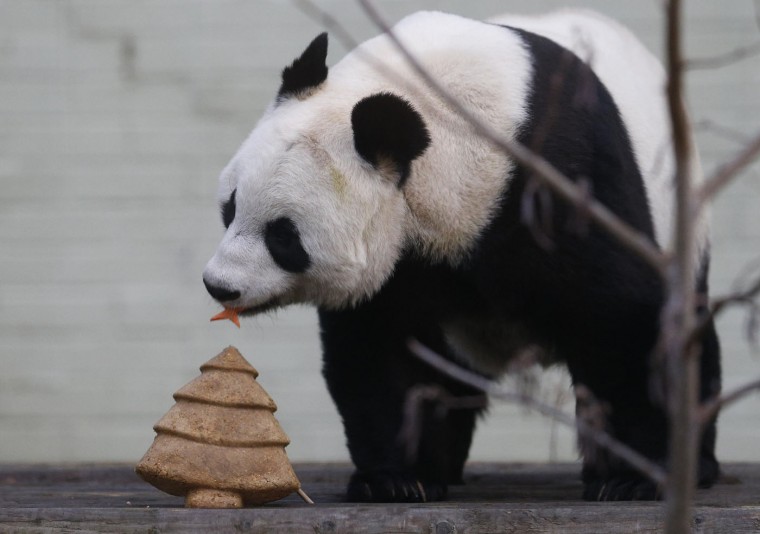 Tian Tian, a giant panda eats a special Christmas panda cake crafted in the shape of a Christmas tree in the outdoor enclosure at Edinburgh Zoo ,Scotland December 17, 2014. REUTERS/Russell Cheyne 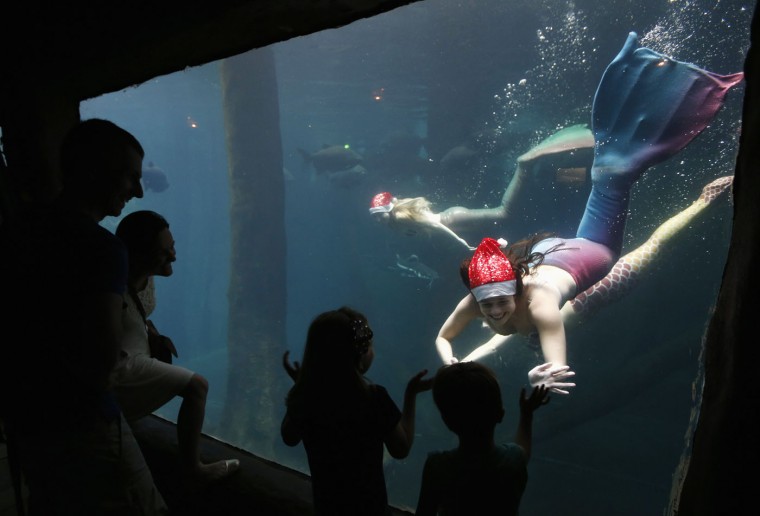 Visitors wave to a woman dressed as a mermaid wearing a Santa Claus cap as she performs from inside a tank at the Sao Paulo Aquarium December 17, 2014. According to organizers, the performance aims to narrate about the myth and legend of mermaids. REUTERS/Paulo Whitaker 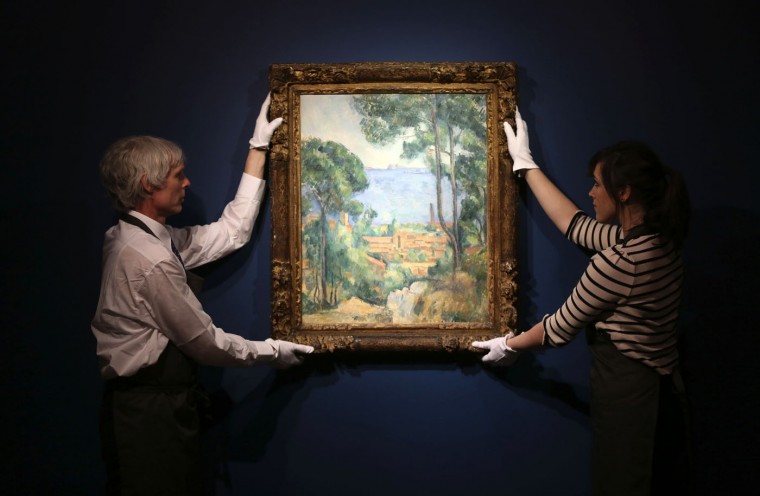 Christie’s staff members pose for a photograph with “Vue sur L’Estaque et Le Chateau d’If” by Paul Cezanne in London December 17, 2014. The “shimmering” Paul Cezanne painting of the Mediterranean with a castle in the background is expected to attract the big-money buyers at a February auction that includes works by Modigliani, Giacometti and Picasso, Christie’s said on Wednesday. The Cezanne work, “Vue sur L’Estaque et Le Chateau d’If”, which he painted in 1883-85 from an apartment overlooking Marseille harbour, will be auctioned on Feb. 4. REUTERS/Paul Hackett 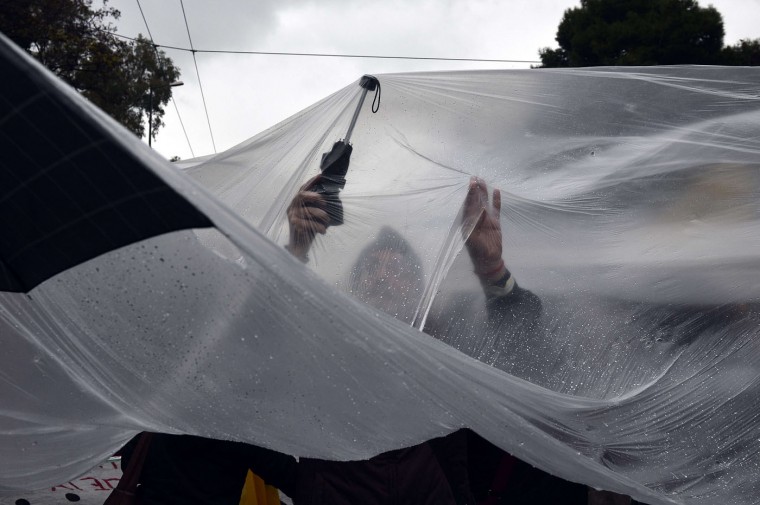 Laid off public sector workers protect themselves from heavy rain as they march in central Athens on December 17, 2014 . Lawmakers from December 17, 2014 will vote for a new Greek president in a ballot that will lead to snap general elections if they fail — putting on the line years of efforts to turn around an economy in crisis. Louisa Gouliamaki/AFP/Getty Images 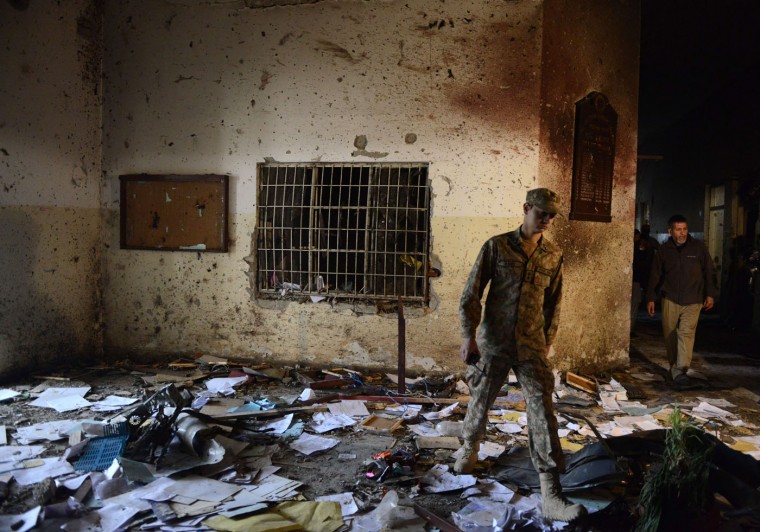 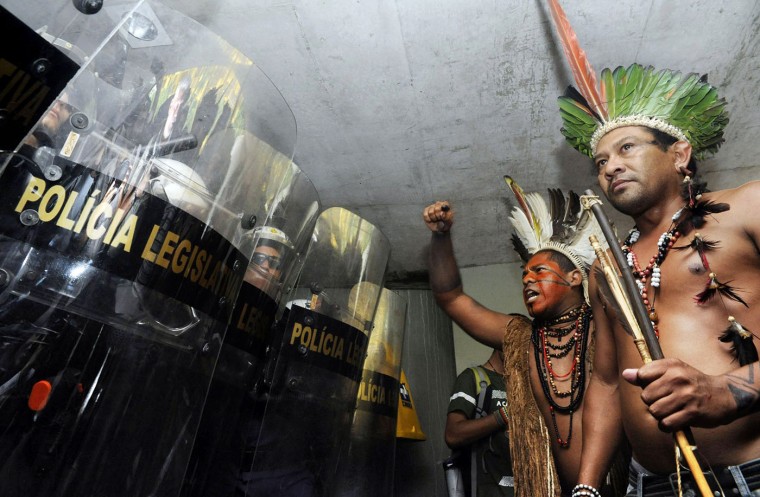 Brazilians natives are blocked from entering the Chamber of Deputies in Brasilia, Brazil on December 16, 2014, during a protest against the new demarcation of indigenous lands bill that is being discussed in Congress –after being passed by the Executive. Agencia Brasil/Antonio Cruz/AFP/Getty Images 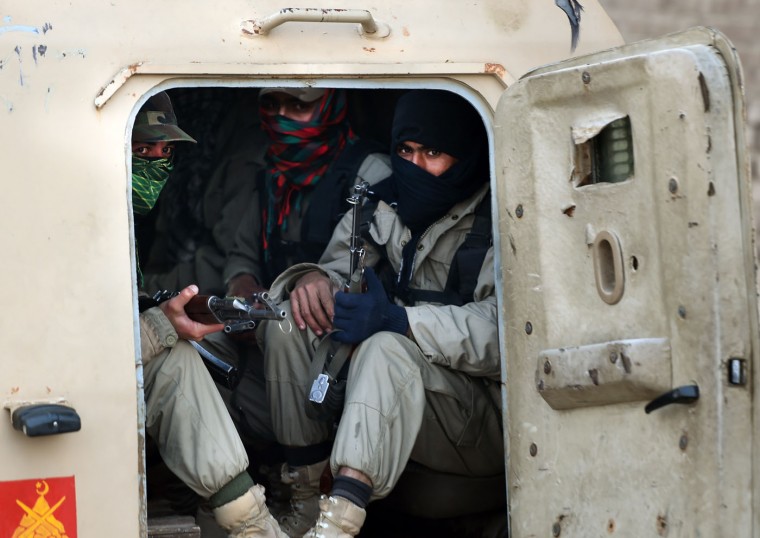 Pakistani army soldiers sit in an armoured vehicle as they patrol the perimiter of a school in Peshawar on December 17, 2014, the day after an attack on the army run establishment in the northern city. Pakistan has begun three days of mourning for the 132 schoolchildren and nine staff killed by the Taliban in the country’s deadliest ever terror attack as the world united in a chorus of revulsion. The 141 people were killed when insurgents stormed an army-run school in the northwestern city of Peshawar on Tuesday and systematically went from room to room shooting children during an eight-hour killing spree. Farooq Naeem/AFP/Getty Images 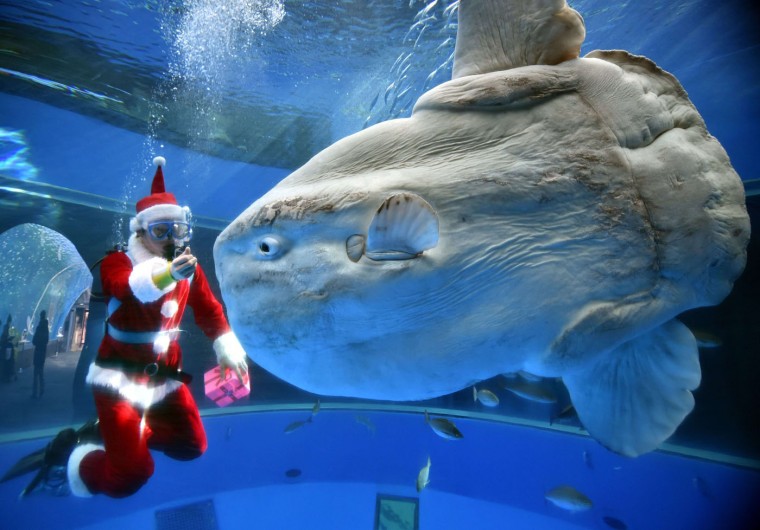 A diver wearing a Santa Claus costume feeds a sunfish to attract visitors at the Hakkeijima Sea Paradise aquarium in Yokohama, suburban Tokyo on December 17, 2014. Christmas attractions will be held till Christmas Day. Yoshikazu Tsuno/AFP/Getty Images