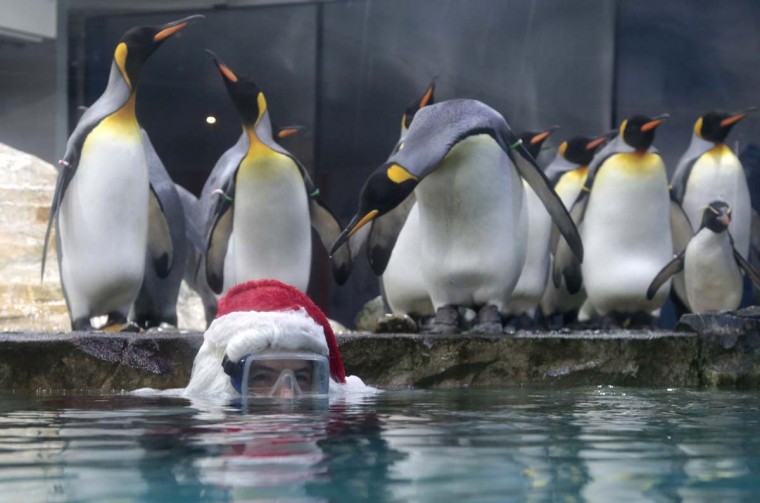 A king penguin looks over at a man dressed as Santa Claus who wears a scuba mask as he poses in their tank at the Marineland animal park in Antibes, December 19. || PHOTO CREDIT: ERIC GAILLARD – REUTERS 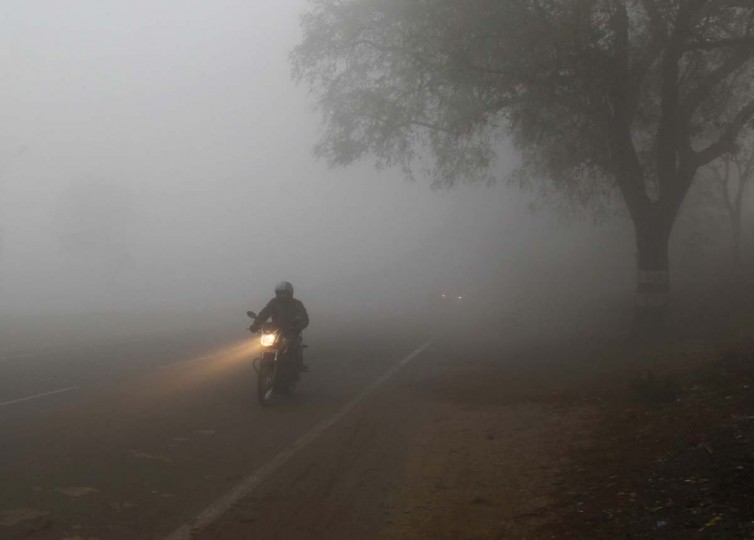 A man rides a motorcycle through dense fog on a road during winter morning in the northern Indian city of Allahabad December 19. || PHOTO CREDIT: JITENDRA PRAKASH – REUTERS 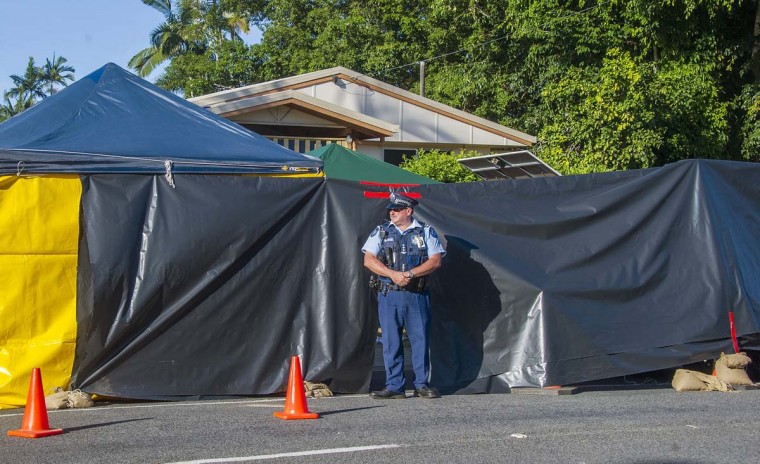 A policeman guards the scene of a stabbing attack at a home in Cairns, northern Queensland, December 19. Eight children have been killed and a woman who was mother to seven of them was injured in the northern Australian city of Cairns, police said on Friday, in what several media outlets reported was a mass stabbing. || PHOTO CREDIT: STRINGER – REUTERS 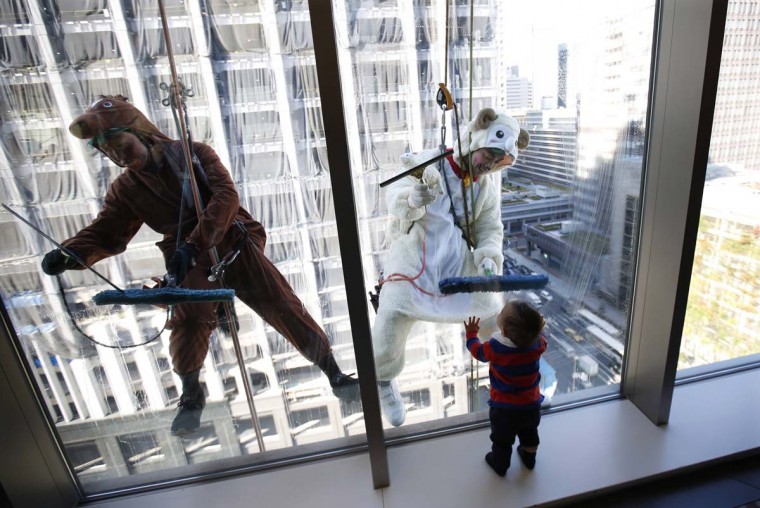 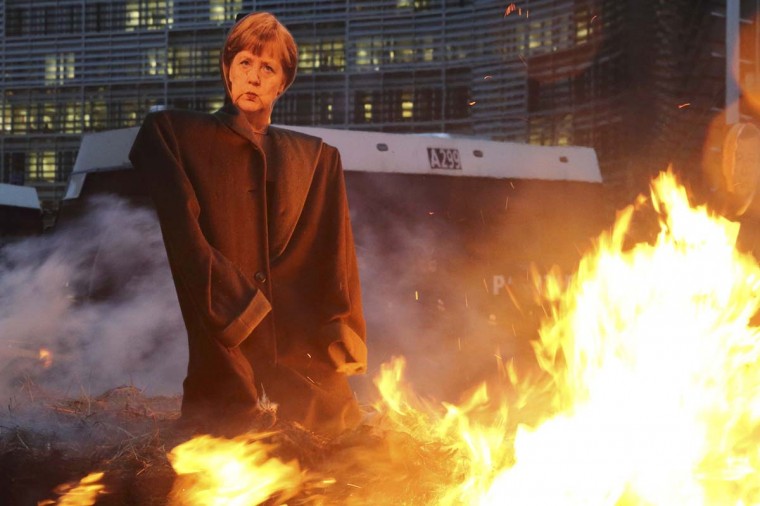 An effigy of German Chancellor Angela Merkel is seen near burning bales of straw set on fire by European farmers during a protest against the Transatlantic Trade and Investment Partnership (TTIP) near the European Commission headquarters in Brussels December 19. || PHOTO CREDIT: PASCAL ROSSIGNOL – REUTERS 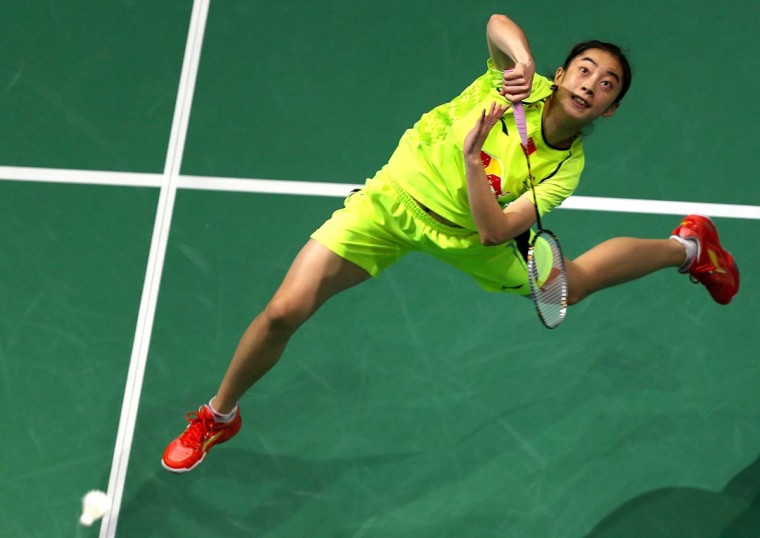 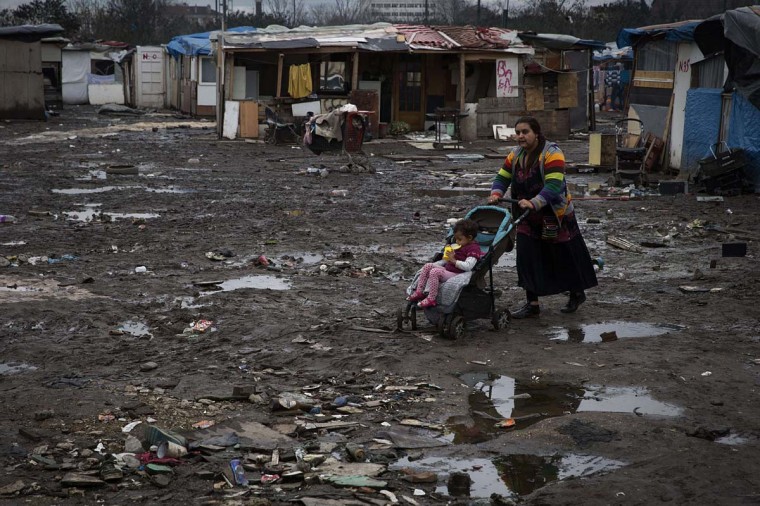 A woman pushes a stroller in a Roma camp in Ivry-sur-Seine, southern Paris, on December 18. A former gendarmerie in Ivry-sur-Seine has been renovated to host 11 Roma families. || CREDIT: JOEL SAGET – AFP/GETTY IMAGES 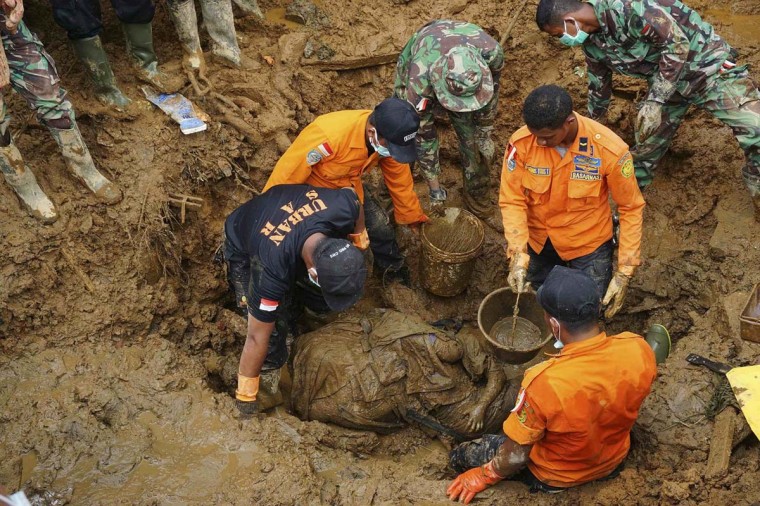 Soldiers and rescue team members find the dead bodies of a mother and her child after a landslide at Sampang village in Banjarnegara December 19 in this picture provided by Antara Foto. The landslide destroyed the village and killed at least 88 people, according to officials. || PHOTO CREDIT: IDHAD ZAKARIA/ANTARA FOTO – REUTERS 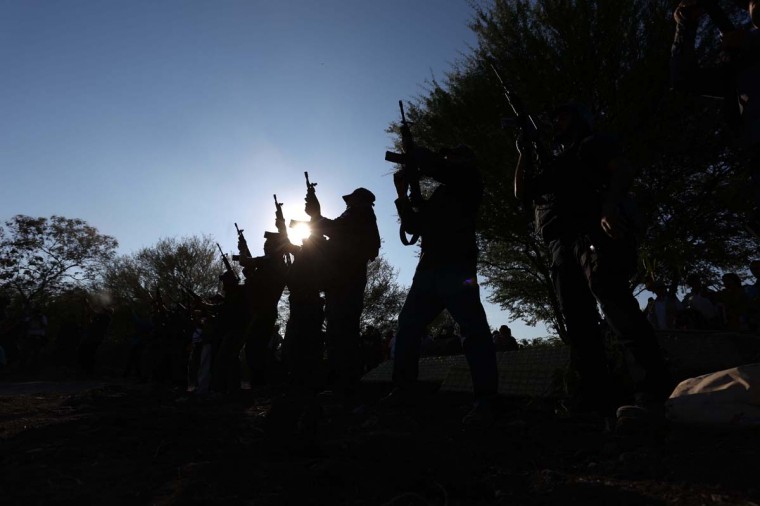 Members of a self-protection militia fire their weapons into the air during the funeral of Manuel Mora in the La Ruana Community, Michoacan State, December 18. The son of militia leader Hipólito Mora, Manuel Mora and 11 other were killed on December 16th during clashes with other groups of rural police. CREDIT: STRINGER -AFP/GETTY IMAGES 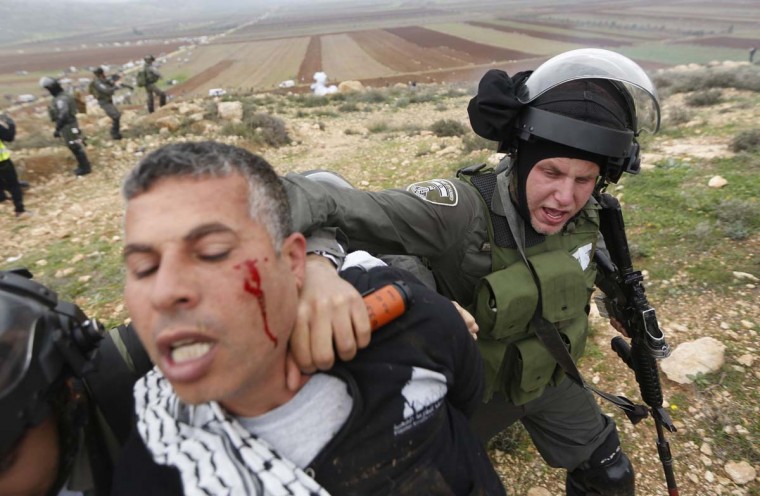 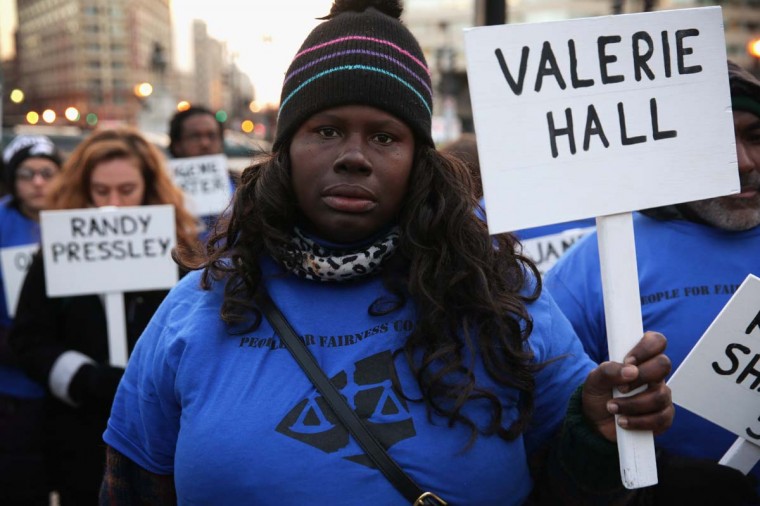 Local resident Jennifer McLaughlin and other activists hold up signs with names oflocal homeless people who have passed away this year during a vigil December 18 in Washington, DC. The People for Fairness Coalition held the event in observance of Homeless Persons Memorial Day and honored those who died homeless in 2014. (Photo by Alex Wong/Getty Images) 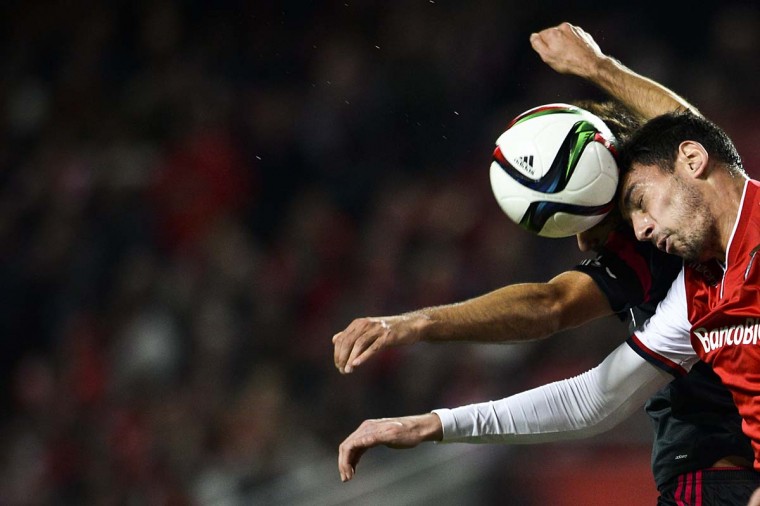 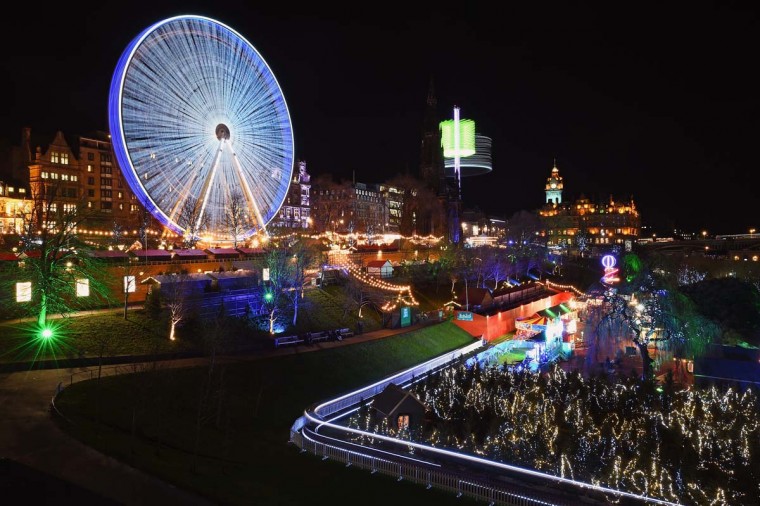 Members of the public enjoy the Christmas Market, one of a number of attractions situated in Princes Street Gardens in Edinburgh along with an ice rink carousel and a Big Wheel, it opened in late November and runs until January 4, 2015. (Photo by Jeff J Mitchell/Getty Images) 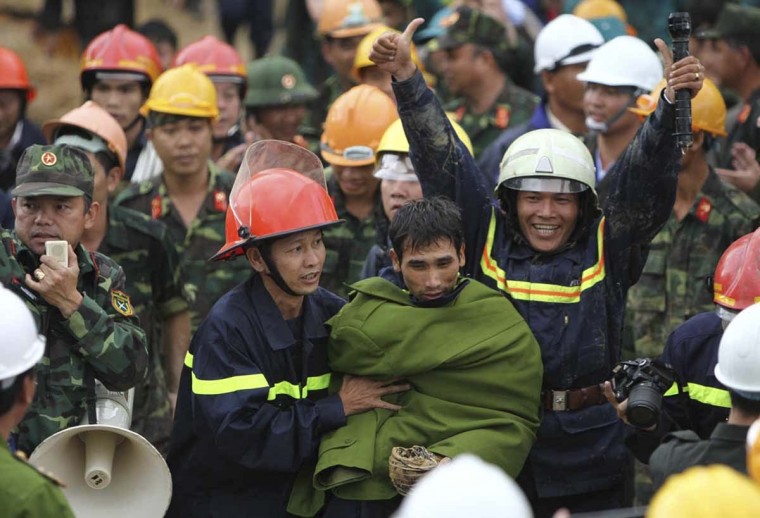 Rescuers walk next to a worker after freeing him and others from a collapsed tunnel at a construction site of a hydropower plant in Vietnam’s central province of Lam Dong December 19. Vietnamese rescuers on Friday saved 12 workers trapped in the tunnel that collapsed during construction of the hydropower plant after nearly four days of digging, drilling and hoping. Mandatory credit. || PHOTO CREDIT: DUONG GIANG/VNA – REUTERS 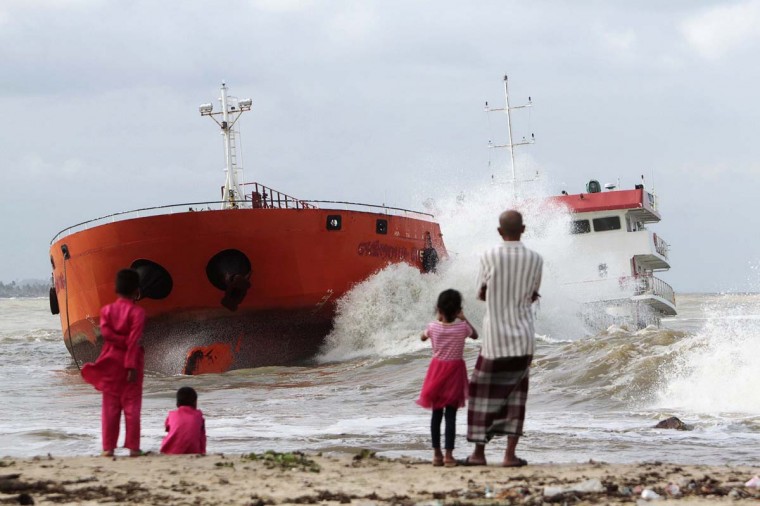 Locals watch from the beach as waves hit an Indonesian tanker that ran aground near Narathiwat in southern Thailand December 19. The tanker loaded with palm oil, previously hijacked by its crew members and then seized by Thai authorities, was anchored some 400 meters from the beach but strong wind and waves broke it free, according to local media. || PHOTO CREDIT: SURAPAN BOONTHANOM – REUTERS 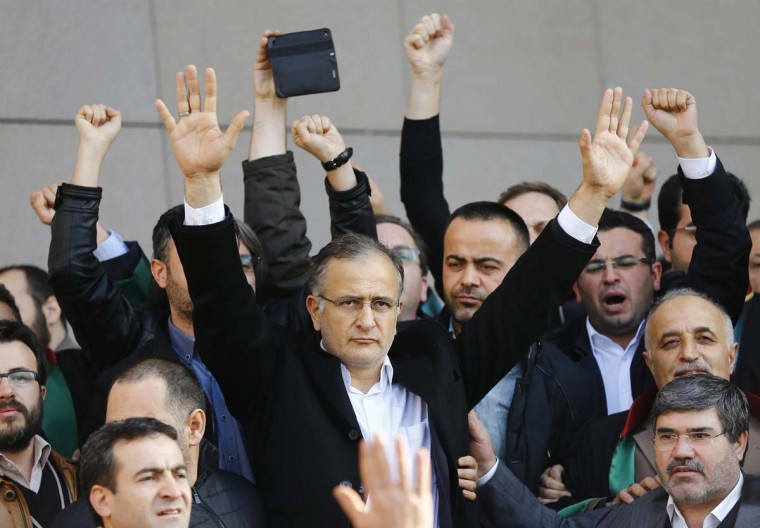 Zaman editor-in-chief Ekrem Dumanli greets his supporters after being released by the court outside the Justice Palace in Istanbul December 19. The European Union, which Turkey is seeking to join, has said last weekend’s police raids to detain Karaca and other media workers was contrary to European values, but Erdogan told the bloc to mind its own business. || PHOTO CREDIT: MURAD SEZER – REUTERS 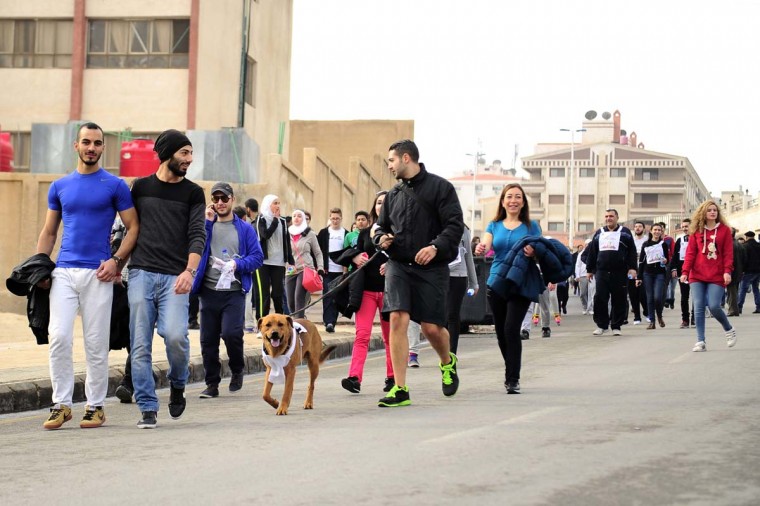 A man walks a dog as he joins others at a charity run organized by BASMA to raise funds for the treatment of children with cancer in Syria, at Dummar, west of Damascus December 19. REUTERS/Omar Sanadiki 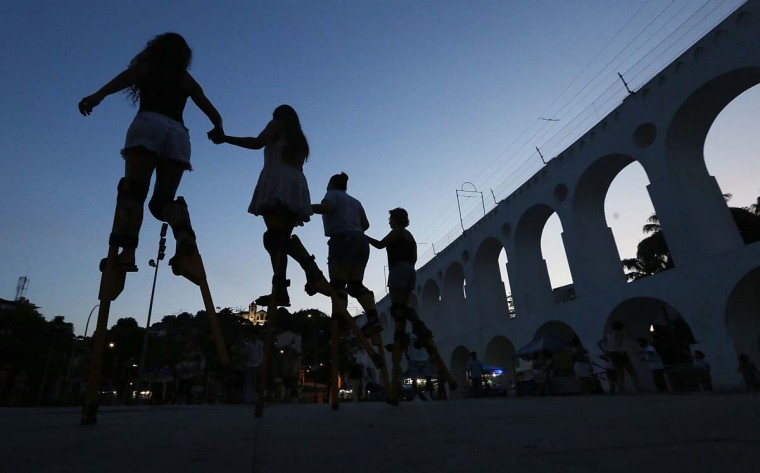 People practice walking on stilts during a stilt walking workshop as part of pre-Carnival festivities between the famed Lapa arches on December 18 in Rio de Janeiro, Brazil. Carnival begins February 13 yet practices and festivities are already underway. (Photo by Mario Tama/Getty Images) 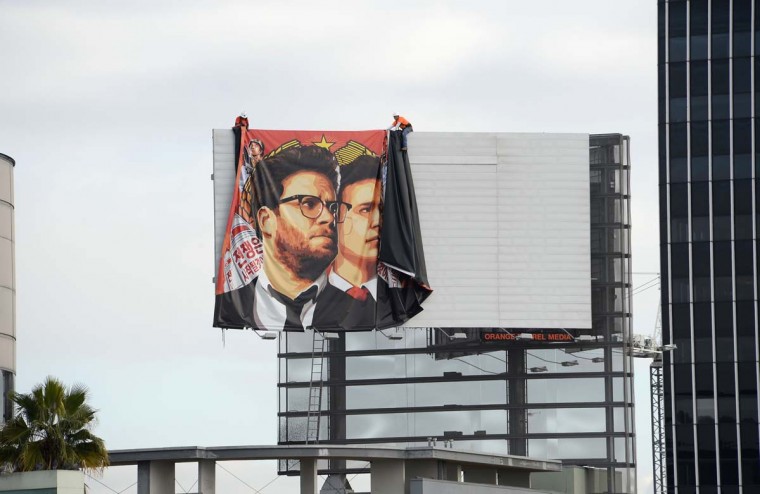 Workers remove a poster-banner for “The Interview” from a billboard in Hollywood, California, December 18 a day after Sony announced it had no choice but to cancel the movie’s Christmas release and pull it from theaters due to a credible threat. Sony defended itself Thursday against a flood of criticism for canceling the movie which angered North Korea and triggered a massive cyber-attack, as the crisis took a wider diplomatic turn. || CREDIT: ROBYN BECK – AFP/GETTY IMAGES