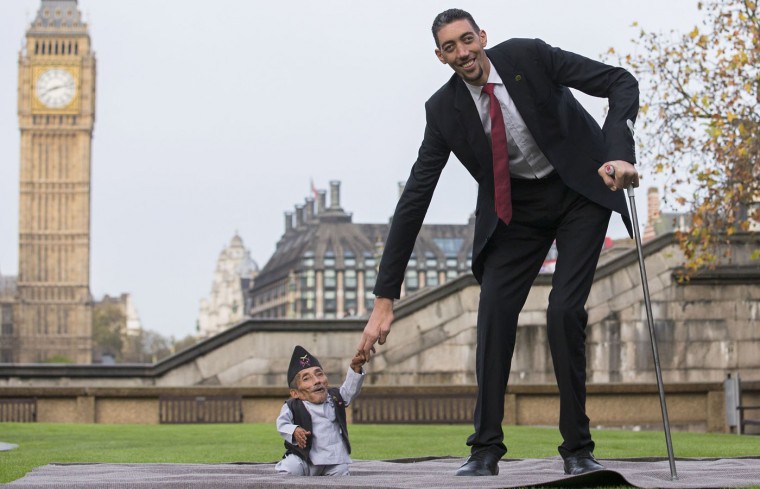 Chandra Bahadur Dangi, from Nepal, (L) the shortest adult to have ever been verified by Guinness World Records, poses for pictures with the world’s tallest man Sultan Kosen from Turkey, during a photocall in London on November 13, 2014, to mark Guinness World Records Day. Chandra Dangi, measures a tiny 21.5in (0.54m) the same height as six stacked cans of beans. Sultan Kosen measures 8 ft 3in (2.51m). (Andrew Cowie/AFP/Getty Images) 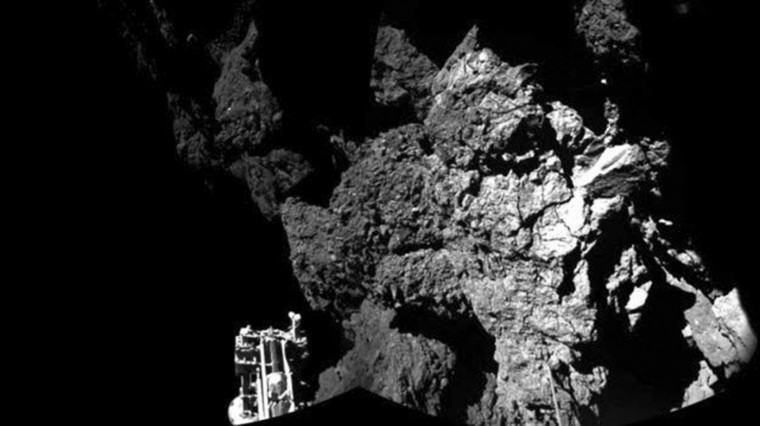 A probe named Philae is seen after it landed safely on a comet, known as 67P/Churyumov-Gerasimenko, in this CIVA handout image released November 13, 2014. The European probe that landed on the comet in a first for space exploration is safely anchored on the surface despite technical problems, pictures beamed half a billion kilometres (300 million miles) back to Earth showed on Thursday. The lander, named Philae, was launched from its mothership Rosetta on Wednesday as it orbited comet 67P/Churyumov-Gerasimenko, the climax of a 10-year-odyssey for the European Space Agency (ESA). (ESA/Rosetta/Philae/CIVA/Handout via Reuters) 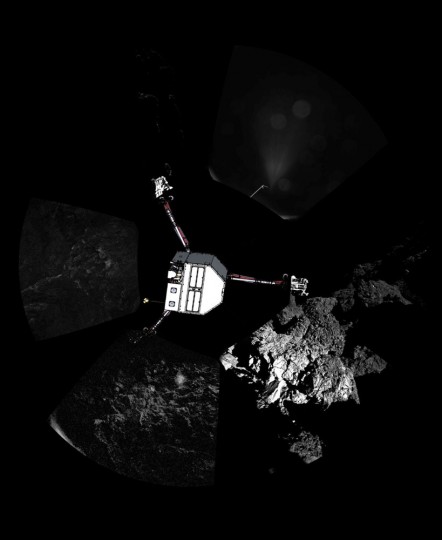 A panoramic image of the surface of Comet 67P/ChuryumovñGerasimenko captured by Rosettaís lander Philae’s CIVA-P imaging system, with a sketch of the lander in the configuration the lander team currently believe it is in superimposed on top, is seen in this European Space Agency (ESA) handout image released November 13, 2014. The European probe that landed on the comet in a first for space exploration is resting on the surface despite technical problems, pictures beamed half a billion kilometres (300 million miles) back to Earth showed on Thursday.(ESA/Rosetta/Philae/CIVA/Handout via Reuters) 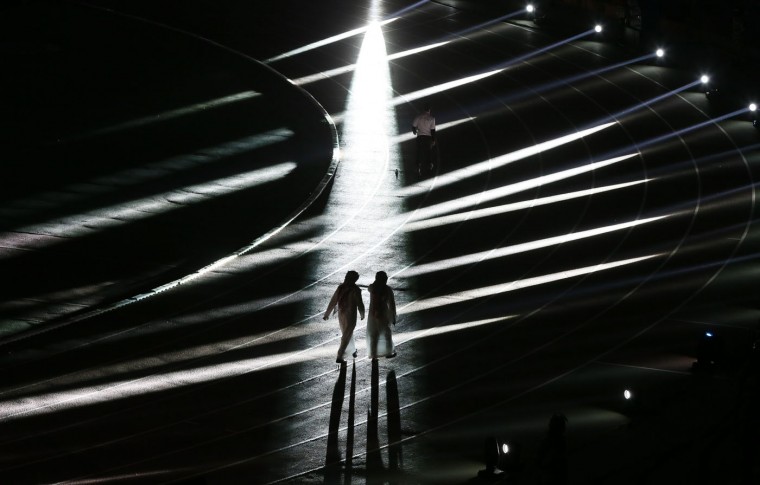 Saudis walk during the opening ceremony of the 22nd Gulf Cup football tournament prior to Saudi Arabia’s match against Qatar in Riyadh on November 13, 2014. Eight nations are taking part in the games including Oman, UAE, Kuwait, Yemen, Bahrain, Iraq, Saudi Arabia and Qatar. (Karim Sahib/AFP/Getty Images) 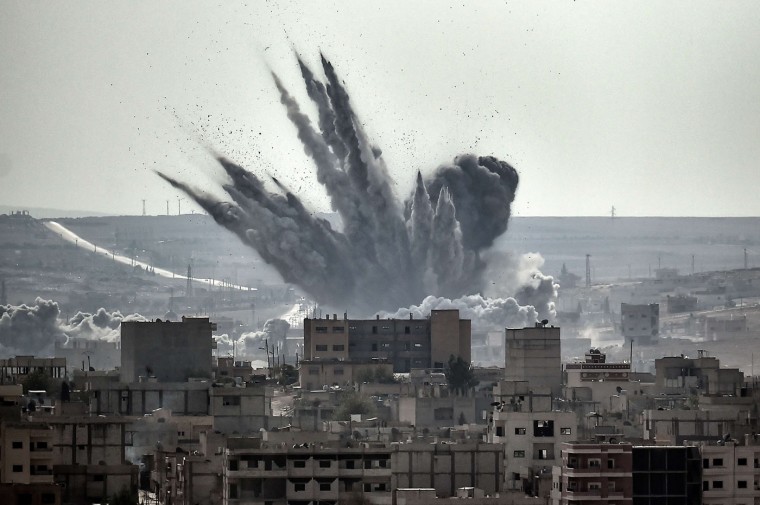 A shell explodes on November 13, 2014 in the Syrian city of Kobane, also known as Ain al-Arab, as seen from the Turkish border village of Mursitpinar, Sanliurfa province. A report issued on November 13 by the Norwegian Refugee Council and International Rescue Committee says Syrians are increasingly unable to escape their country’s war as tougher policies in potential host nations are preventing them from taking refuge in the region and beyond. (Aris Messinis/AFP/Getty Images) 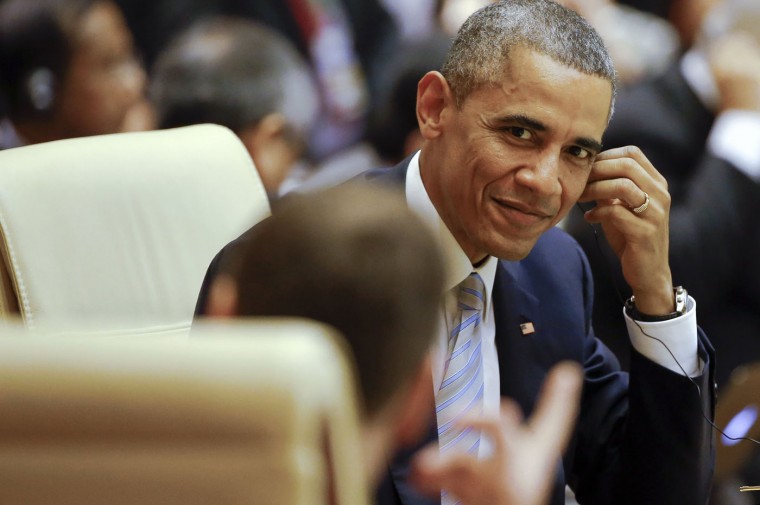 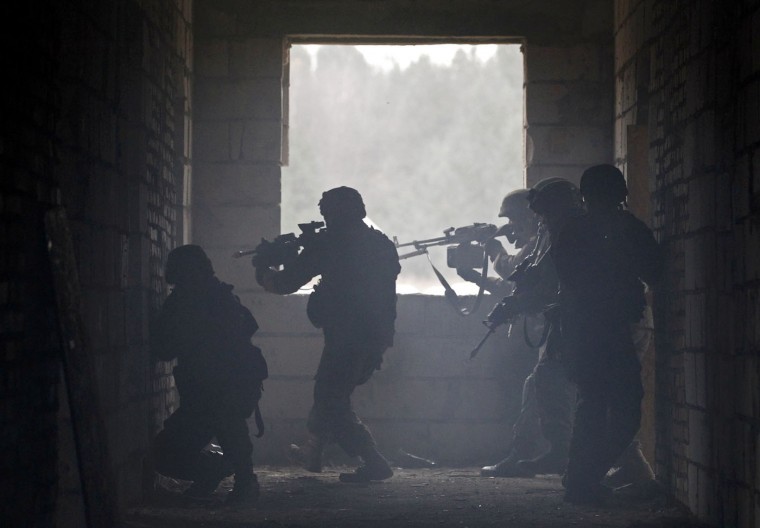 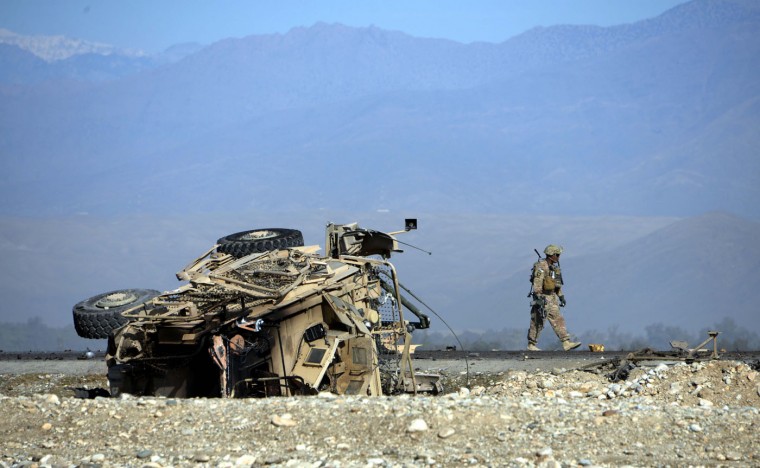 A US soldiers inspects the site of a suicide attack targeting foreign troops in Jalalabad on November 13, 2014. A suicide bomber rammed his explosive-laden vehicle into an armoured vehicle of foreign forces in Jalalabad, the capital of eastern Nangarhar province on November 13, officials said. The attack caused no fatalities to foreign forces or civilians, but damaged an armoured vehicle. (Noorullah Shirzada/AFP/Getty Images) 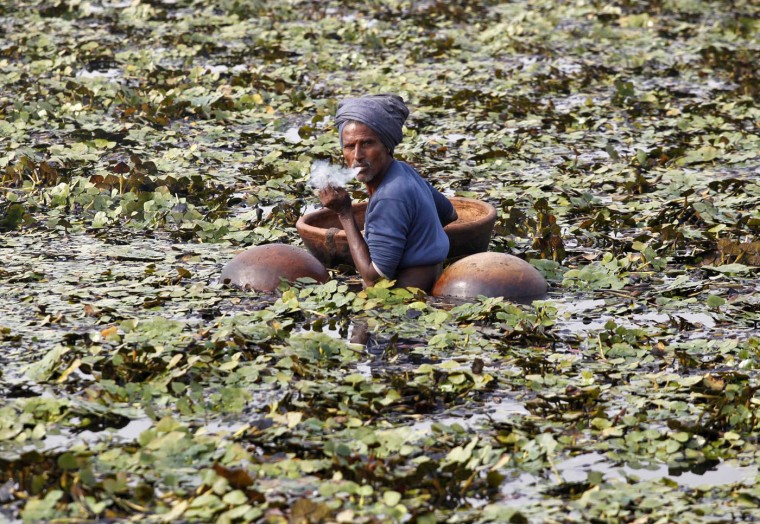 A labourer smokes bidi, a local cigarette hand-rolled with tobacco leaf, as he collects water chestnuts from a pond in the northern Indian city of Allahabad November 13, 2014. Water chestnuts are locally known as Singada and are eaten raw, boiled or are grounded into flour after they are dried. (Jitendra Prakash/Reuters) 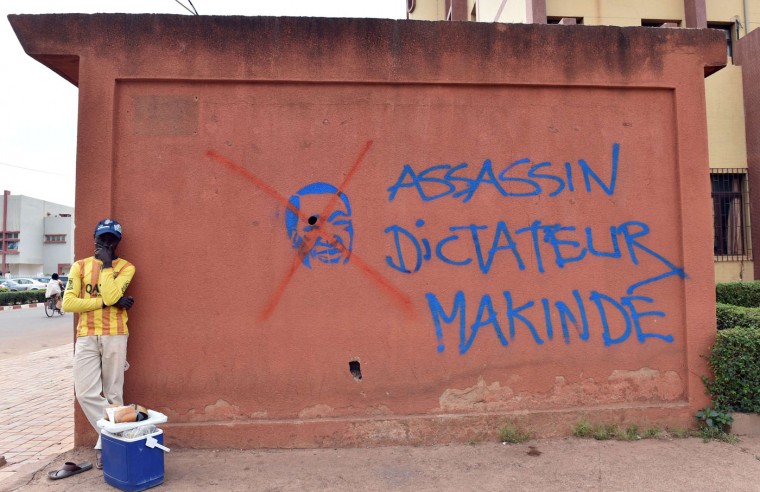 A man stands in front of a wall bearing a graffiti of ousted Burkinabese president Blaise Compaore and reading ”assassin, dictator, Makinde” on the sidelines of negotiations on the transitional government after the ouster of Compaore in Burkina Faso, on November 12, 2014 in Ouagadougou. The army, which took power after president Blaise Compaore’s exit following a popular uprising in response to his bid to extend his 27-year rule, is under heavy international pressure to quickly hand over to a civilian government. (Issouf Sanogo/AFP/Getty Images) 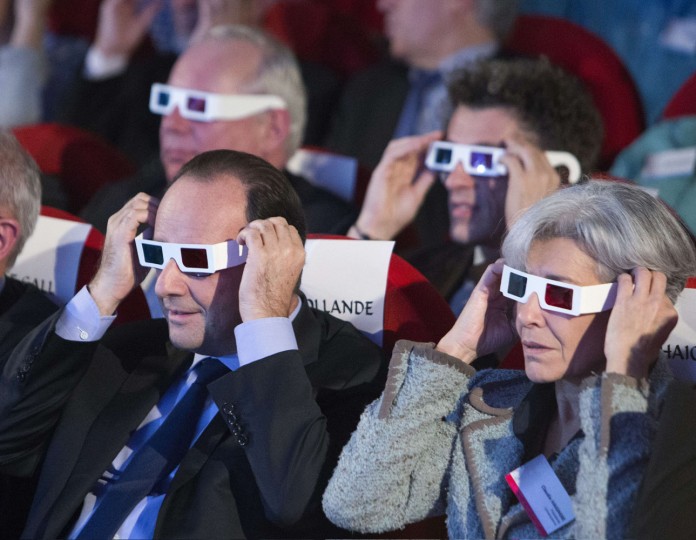 French President Francois Hollande (L) and former French astronaut and minister Claudie Haignere wear 3D glasses to view the first results of the Rosetta mission on the 67P/Churyumov-Gerasimenko comet at the Cite des Sciences in Paris on November 12, 2014. A European probe made the first-ever landing on a comet in a quest to explore the origins of the Solar System, but there were concerns over whether it was fastened securely enough to carry out its mission. (Jacques Brinon/AFP/Getty Images) 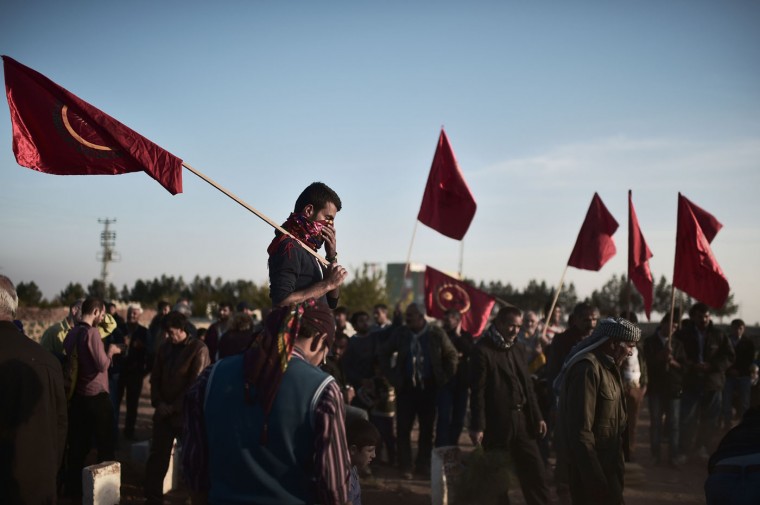 Kurdish people gather in the Turkish town of Suruc in the Sanliurfa province to attend the funeral of a People’s Protection Units (YPG) fighter who died while fighting in the Syrian Kurdish flashpoint town of Kobane, also known as Ain al-Arab, on November 12, 2014. Kurdish forces fighting the Islamic State group in Kobane cut off a key supply route used by the jihadists, the Syrian Observatory for Human Rights said. (Aris Messinis/AFP/Getty Images) 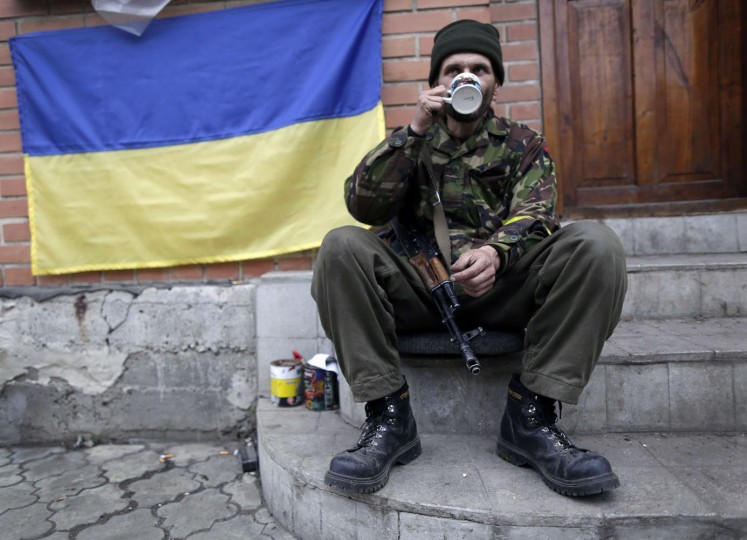 A Ukrainian “Right Sector” volunteer takes a rest at his position near the village of Peski, next to Donetsk’s airport on November 13, 2014. The International pressure on Russia was mounting on November 13 over claims it is sending fresh military hardware into eastern Ukraine which could fuel a return to all-out conflict. (Max Vetrov/AFP/Getty Images) 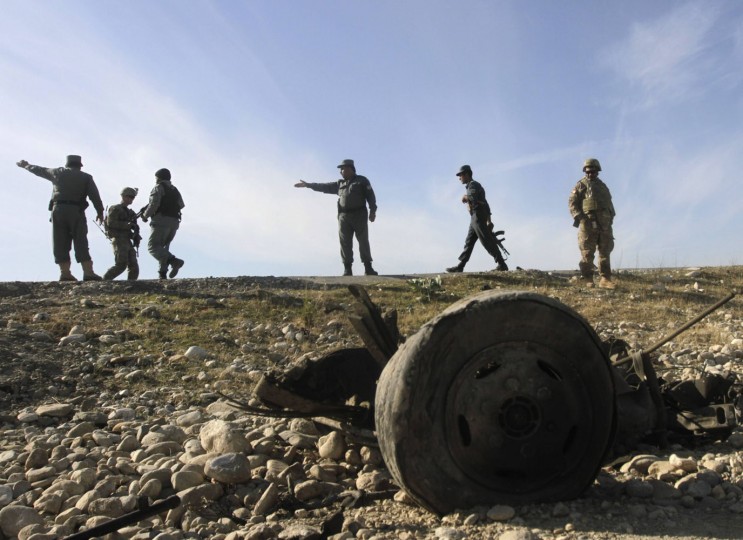 U.S. troops and Afghan policemen inspect at the site of a suicide attack on the outskirts of Jalalabad, November 13, 2014. The suicide bomber rammed his explosive-laden vehicle into U.S. forces travelling in a NATO convoy on Thursday in eastern Nangarhar province; the attack caused no fatalities to foreign forces or civilians, but damaged an armoured vehicle, the provincial spokesman Ahmadzia Abdulzai said, local media reported.(Parwiz/Reuters) 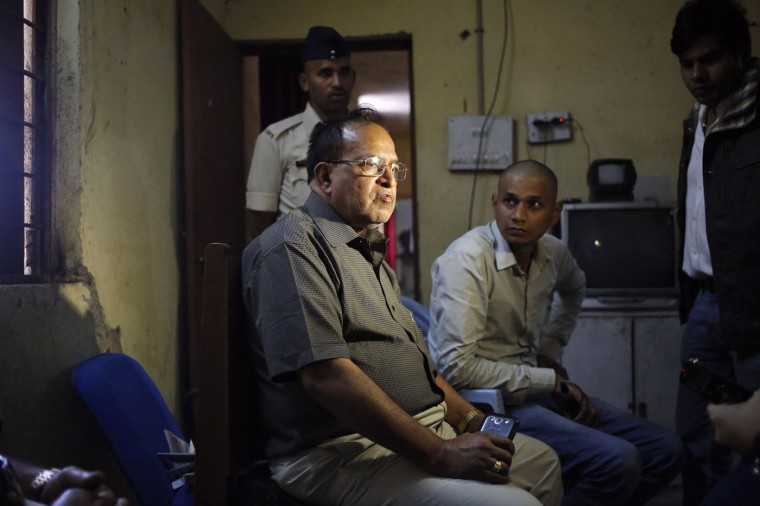 R.K.Gupta (L), a doctor who performed sterlisation surgeries at a government mass sterilisation “camp”, sits at a police station as police and the media look on in Bilaspur, in the eastern Indian state of Chhattisgarh, November 13, 2014. Gupta, whose sterilisation of 83 women in less than three hours ended in at least a dozen deaths said on Thursday the express operations were his moral responsibility and blamed adulterated medicines for the tragedy. Gupta, who says he has conducted more than 50,000 such operations, denied that his equipment was rusty or dirty and said it was the government’s duty to control the number of people that turned up at his family-planning “camp”. (Anindito Mukherjee/Reuters) 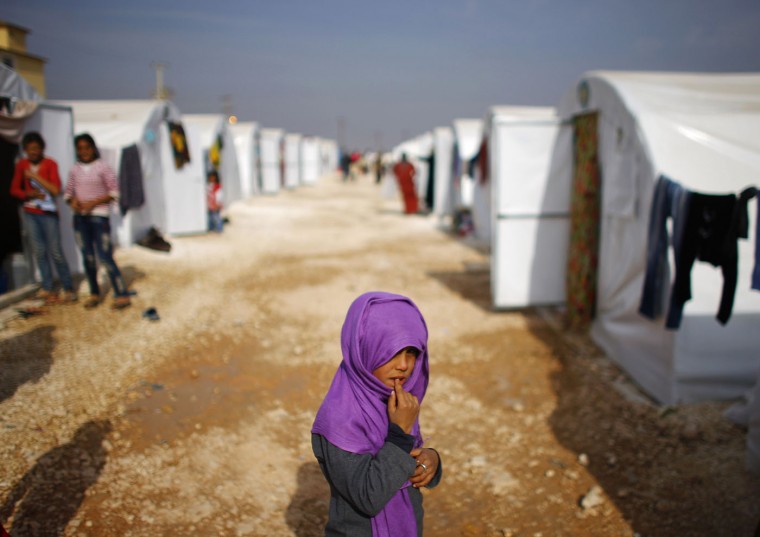 A Kurdish refugee girl from the Syrian town of Kobani is seen in a refugee camp in the Turkish border town of Suruc, Sanliurfa province November 13, 2014. (Osman Orsal/Reuters) 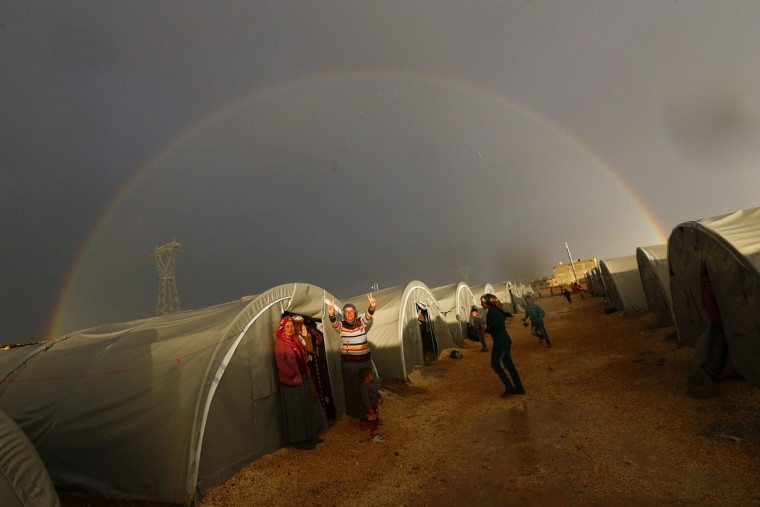 A Kurdish refugee from the Syrian town of Kobani shows victory sign as a rainbow forms over the camp in the southeastern town of Suruc, Sanliurfa province, in this October 16, 2014 file photo. Reuters photographers have chronicled Kurdish refugee crises over the years. In 1991 Srdjan Zivulovic documented refugees in Cukurca who had escaped a military operation by Saddam Hussein’s government in Iraq aimed at “Arabising” Kurdish areas in the north. Hundreds of thousands fled into Turkey and Iran. Images shot in recent months show familiar scenes as crowds of people flee Islamic State militants in Syria. There are as many as 30 million Kurds, spread through Turkey, Iraq, Syria and Iran. Most Kurds are Sunni Muslims, but tend to feel more loyalty to their Kurdishness, rather than their religion. (Kai Pfaffenbach/Files/Reuters)