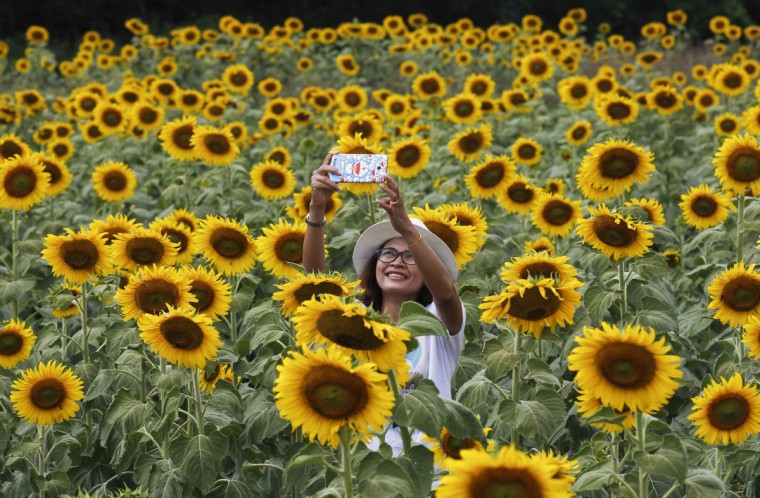 A woman takes a “selfie” at a sunflower field in Lopburi province, north of Bangkok. (Chaiwat Subprasom/Reuters) 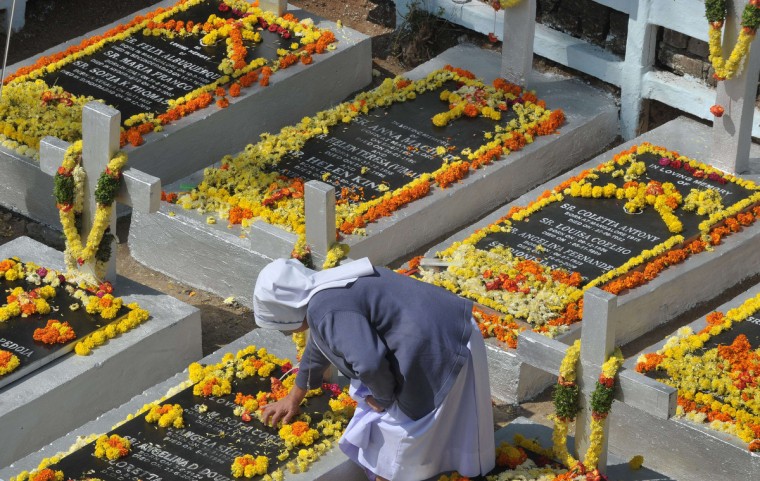 An Indian Catholic nun decorates the graves of deceased sisters at a Catholic Cemetery during All Souls Day in Hyderabad. All Souls Day is a Roman Catholic day observed in remembrance of friends and loved ones who have passed away. The living pray on behalf of Christians who are in purgatory, the state in the after life where souls are purified before proceeding to heaven. (Noah Seelam/Getty Images) 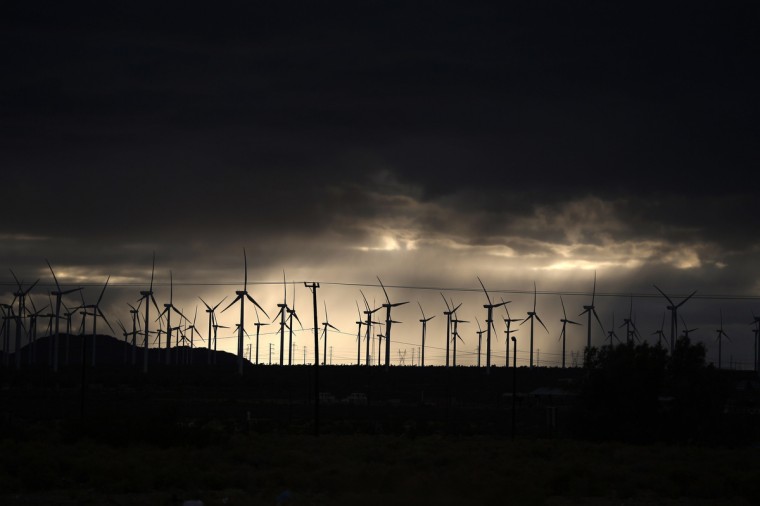 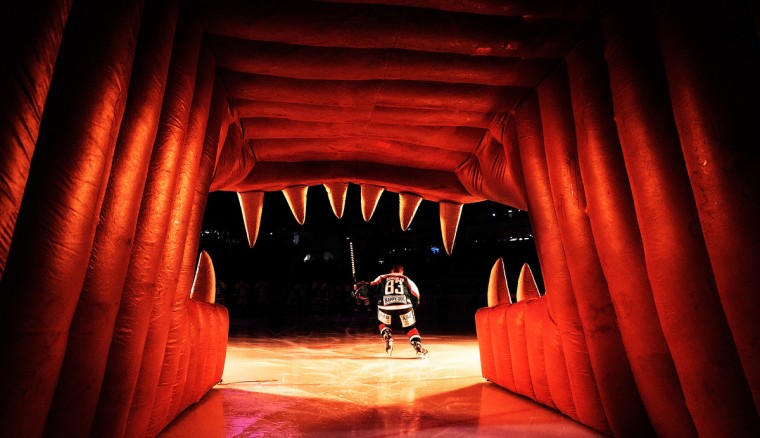 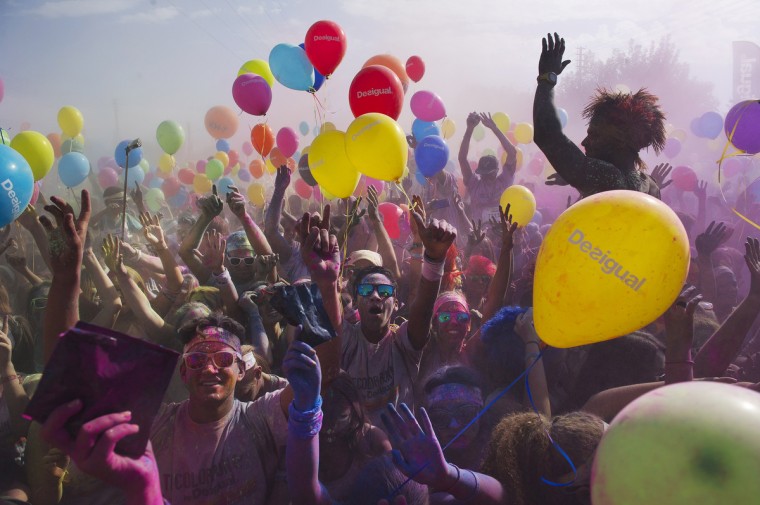 Runners dance after taking part in the Color Run of Sevilla. The Color Run is a race where participants are showered with colored powder after each kilometer. (Cristina Quicler/Getty Images) 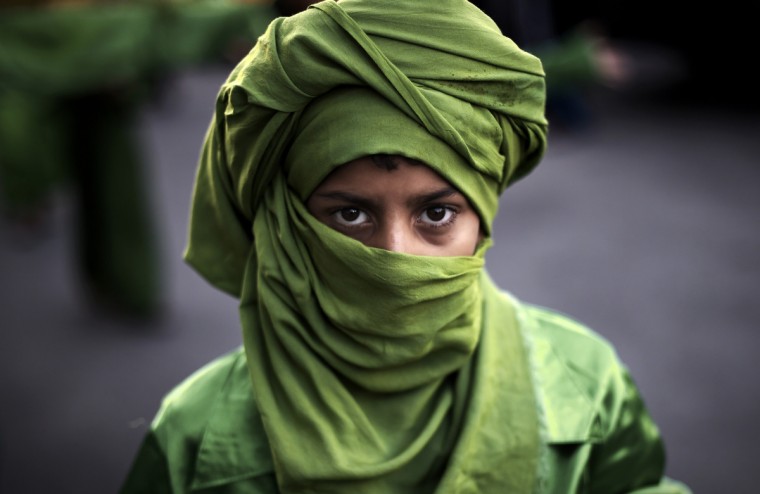 A Bahraini Shiite Muslim looks at the camera as he takes part in a ceremony marking Ashura, which commemorates the seventh century slaying of Imam Hussein, the grandson of Prophet Mohammed, in the village of Sanabis, west of Manama. Ashura mourns the death of Imam Hussein, a grandson of the Prophet Mohammed, who was killed by armies of the Yazid near Karbala in 680 AD. (Mohammed Al-Shaikh/Getty Images) 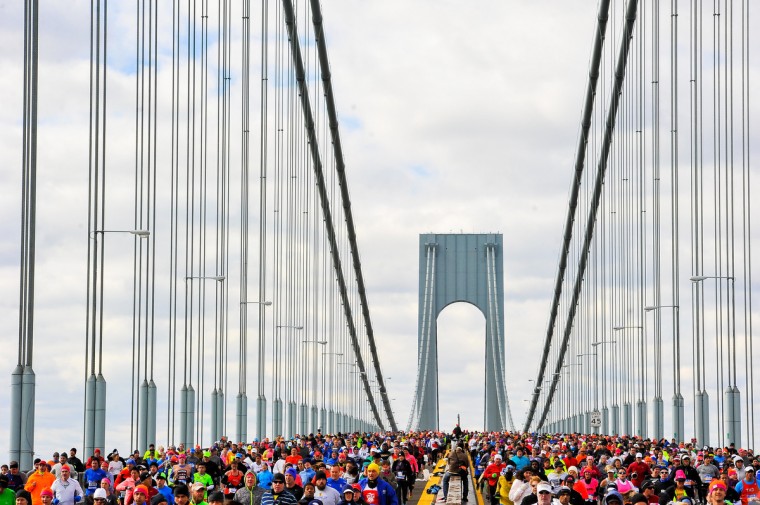 Runners cross the Verrazano-Narrows Bridge at the start of the TCS New York City Marathon in the Brooklyn borough of New York City. (Alex Goodlett/Getty Images) 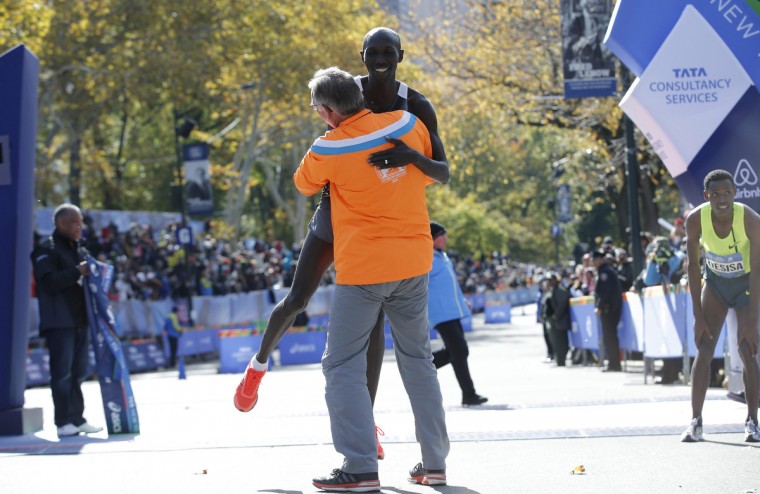 A supporter lifts Wilson Kipsang of Kenya off the ground after he crossed the finish line to win the men’s professional division of the 2014 New York City Marathon in Central Park in Manhattan. At right is second place finisher Lelisa Desisa of Etheopia.(Mike Segar/Reuters) 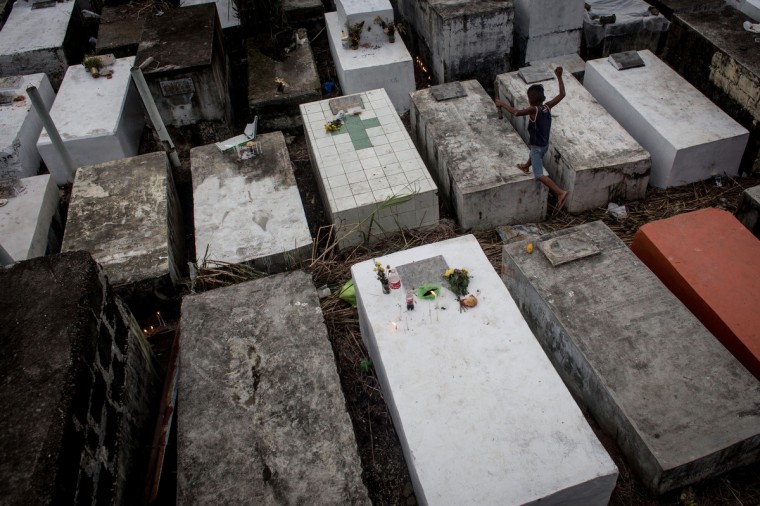 A young boy jumps across grave stones at Basper Cemetery during All Souls Day in Tacloban, Leyte, Philippines. Basper Cemetary was the original site of a mass grave for Typhoon Haiyan victims, recently the bodies were moved to the newly constructed site at the Holy Cross cemetary however some victims are still buried at the Basper site. Filipinos descend on cemetaries all across the country to tend to the graves of loved ones on November 1-2 marking All Saints day and All Souls day. Residents of Leyte are preparing for the 1-year anniversary since Super Typhoon Yolanda struck the coast on November 8, 2013, leaving more than 6000 dead and many more homeless. (Chris McGrath/Getty Images) 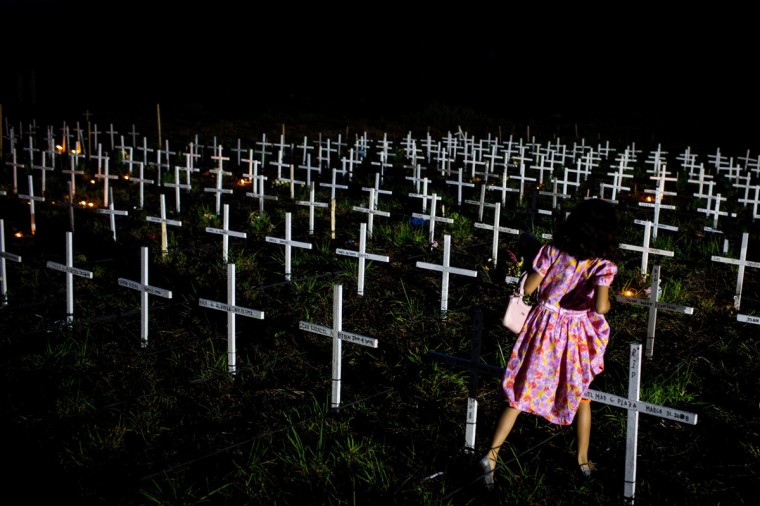 A young girl walks between crosses as she tries to find the grave of a loved one at a newly constructed mass grave for 3,000 typhoon Haiyan victims on the grounds of the Holy Cross Cemetery during All Souls Day in Tacloban, Leyte, Philippines. Filipinos descend on cemetaries all across the country to tend to the graves of loved ones on November 1-2 marking All Saints day and All Souls day. Residents of Leyte are preparing for the 1-year anniversary since Super Typhoon Yolanda struck the coast on November 8, 2013, leaving more than 6000 dead and many more homeless. (Chris McGrath/Getty Images) 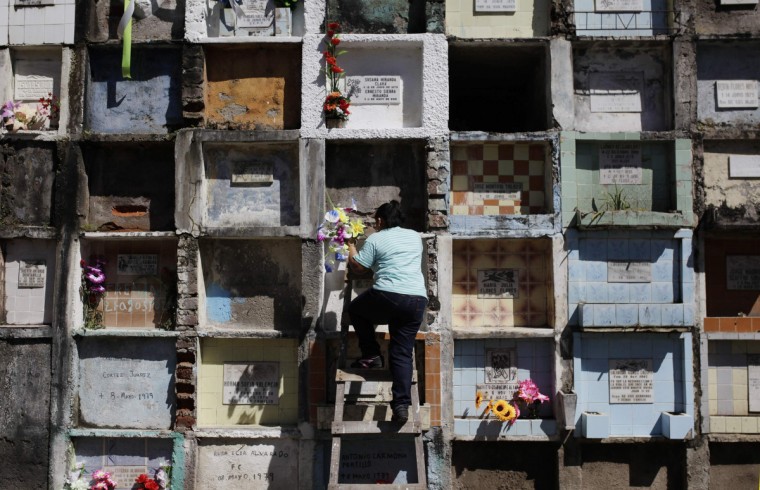 A woman climbs a ladder to place flowers on the crypt of a family member during the Day of the Dead at a cemetery in Panchimalco, on the outskirts of San Salvador. Catholics honor their dead on November 1 and 2 by cleaning and decorating the graves with flowers and spending time next to the graves of their deceased beloved ones. (Jose Cabezas/Reuters) 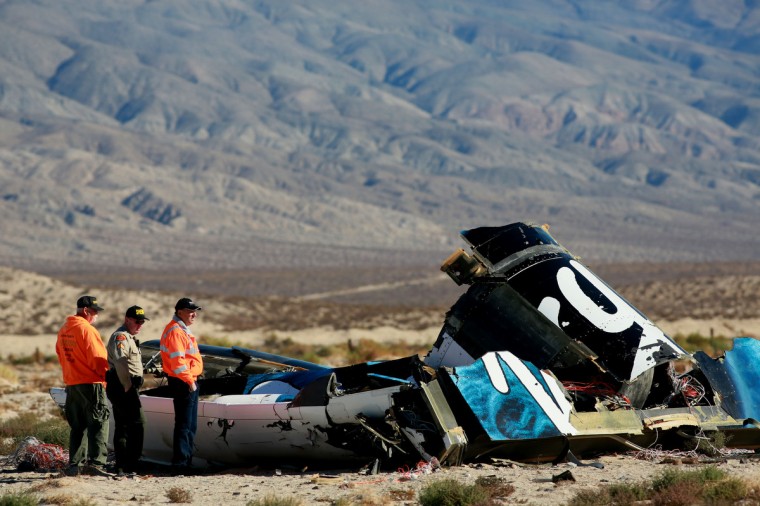 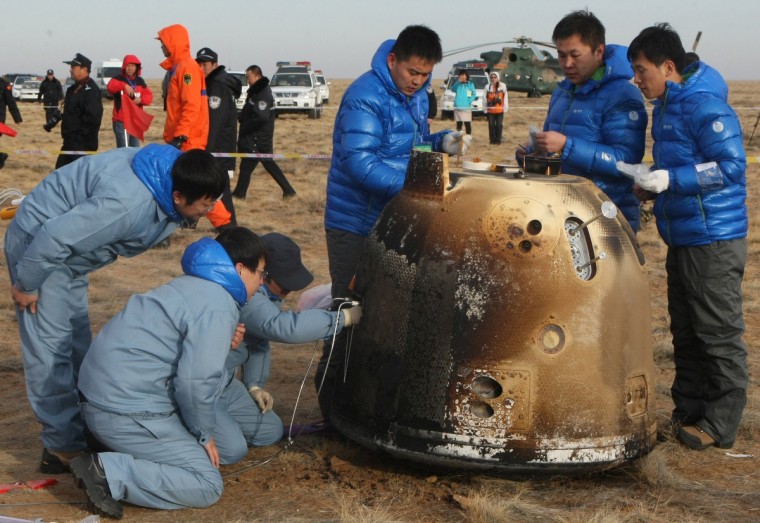 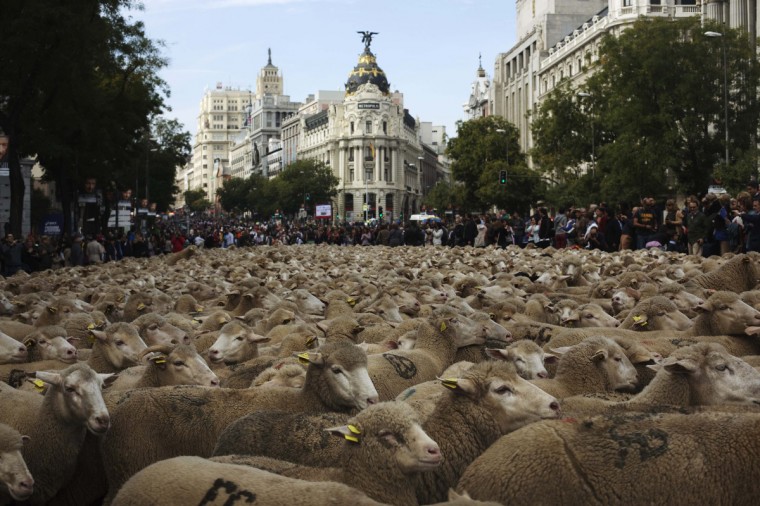 Sheep are herded during the annual sheep parade through Madrid. Shepherds parade the sheep through the city every year in order to exercise their right to use traditional routes to migrate their livestock from northern Spain to winter grazing pasture land in southern Spain. (Susana Vera/Reuters) 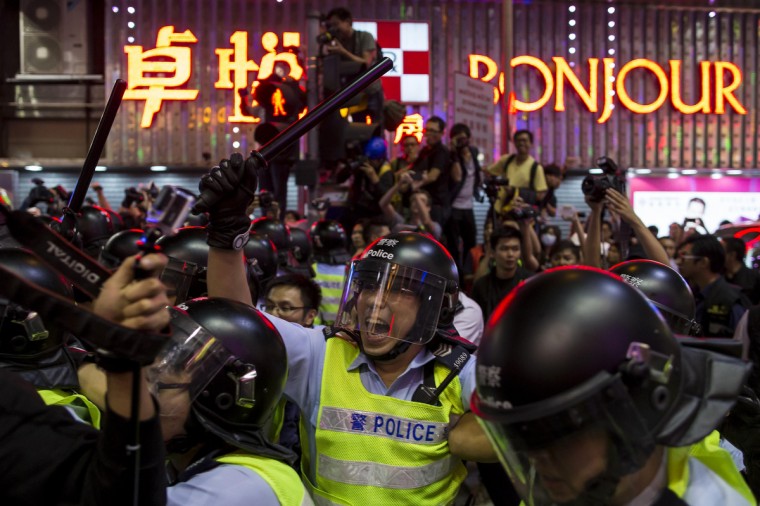 A pro-democracy protester wearing a Guy Fawkes mask holds a yellow umbrella and a banner in the part of Hong Kong’s financial central district protesters are occupying. The former British colony of Hong Kong, which returned to Chinese rule in 1997, has witnessed a month of protests calling on the Beijing-backed government to keep its promise of introducing universal suffrage. The protests have for the most part been peaceful, with occasional clashes between the student-led protesters and Beijing supporters seeking to move them from the streets. (Damir Sagolj/Reuters) 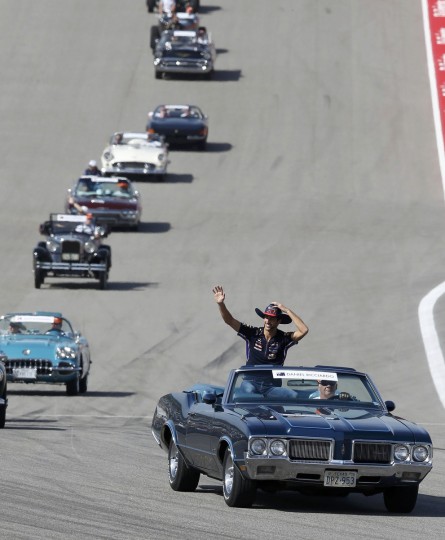 Red Bull Formula One driver Daniel Ricciardo of Australia is driven around the track in a vintage Oldsmobile convertible during ceremonies prior to the start of the F1 United States Grand Prix in Austin, Texas. (Adrees Latif/Reuters) 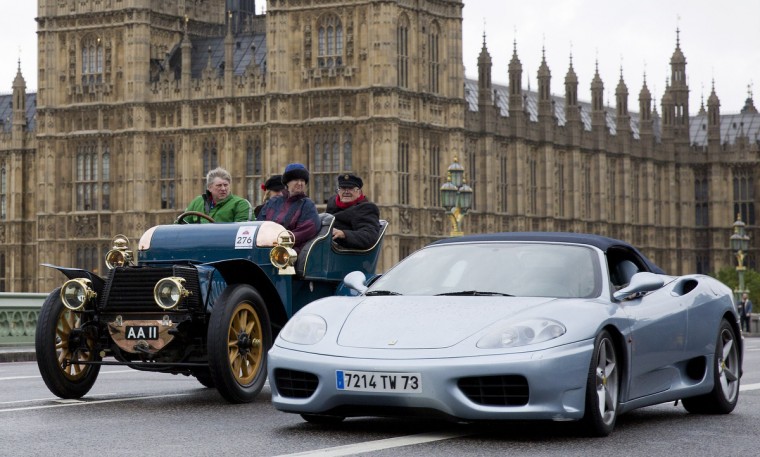 Doug Hill and his passengers in their 1903 Daimler tonneau (L) look across at a Ferrari sports car overtaking them on Westminster Bridge in front of the Houses of Parliament in London as they take part in the London to Brighton Veteran Car Run. The first Brighton Run was held in 1896 to celebrate the Locomotives on the Highway Act. Today generally only cars built before January 1, 1905 are eligible to take part in the annual run that sees hundreds of participants drive from London to Brighton at an average speed of around 20 mph. (Justin Tallis/Getty Images) 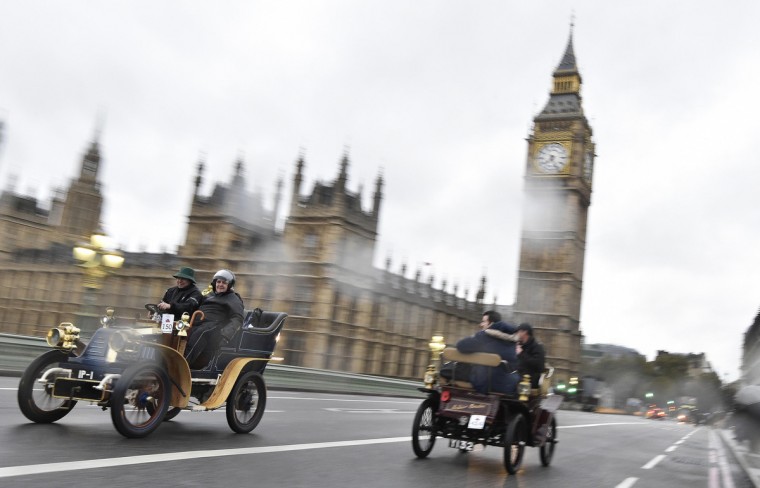 Motorists cross Westminster Bridge as they participate in the annual London to Brighton Veteran Car Run, in London. The annual run is now in its 118th year and takes place on the first Sunday of every November and commemorates the Emancipation Run of 14 November 1896 which celebrated the passing into law of the Locomotives on the Highway Act. The organizers claim it as the longest running motoring event in the world. (Toby Melville/Reuters) 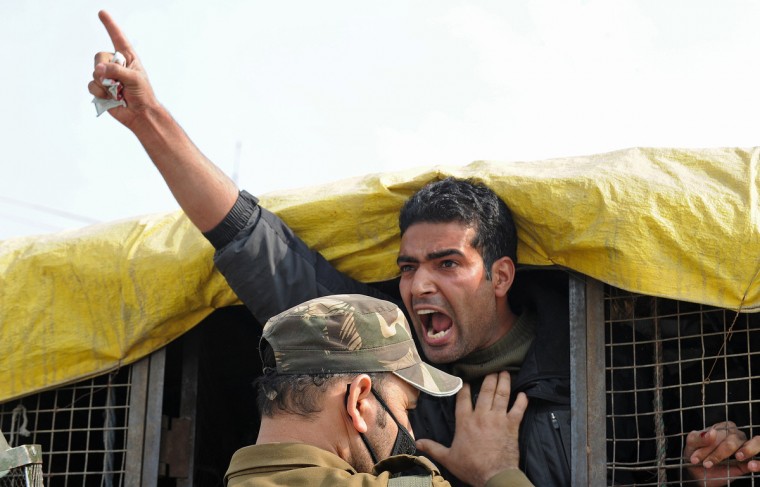 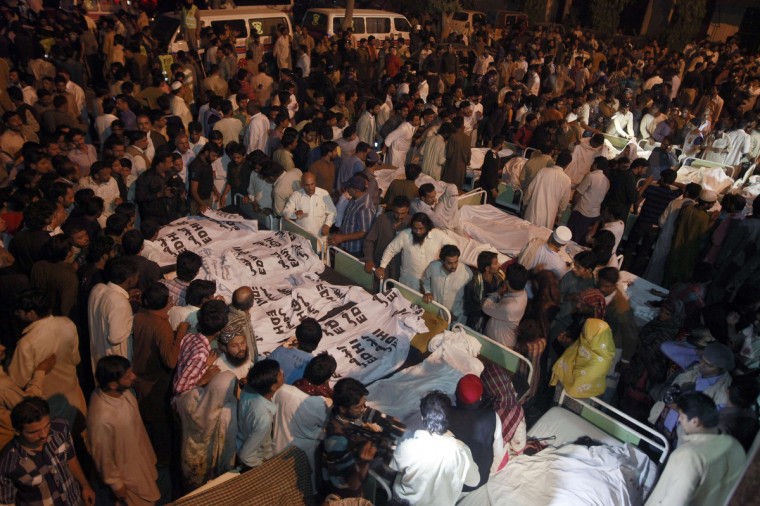 Pakistani relatives gather beside the covered bodies of victims who were killed in suicide bomb attack in Wagah border near Lahore. At least 45 people were killed on Sunday when a suicide bomber blew himself up on the Pakistani-Indian border, police said, just after a daily ceremony when troops from both sides simultaneously lower the two nations’ flags. (Mohsin Raza/Reuters) 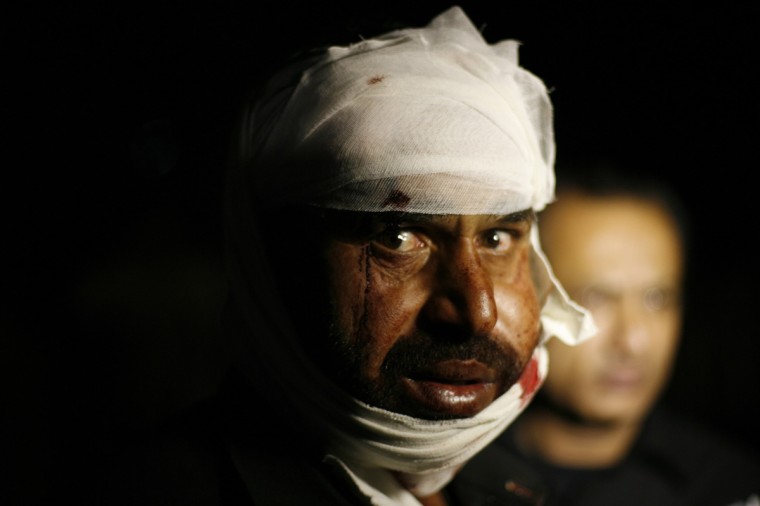 A Pakistani man wounded in a suicide bomb attack, reacts to the camera after received first aid in hospital in Wagah border, near Lahore. At least 45 people were killed on Sunday when a suicide bomber blew himself up on the Pakistani-Indian border, police said, just after a daily ceremony when troops from both sides simultaneously lower the two nations’ flags. (Mani Rana/Reuters)

« On the stump: Anthony Brown and Larry Hogan’s race for Maryland governor » Rough Cut: Baltimore Ravens are stomped by the Pittsburgh Steelers 43-23