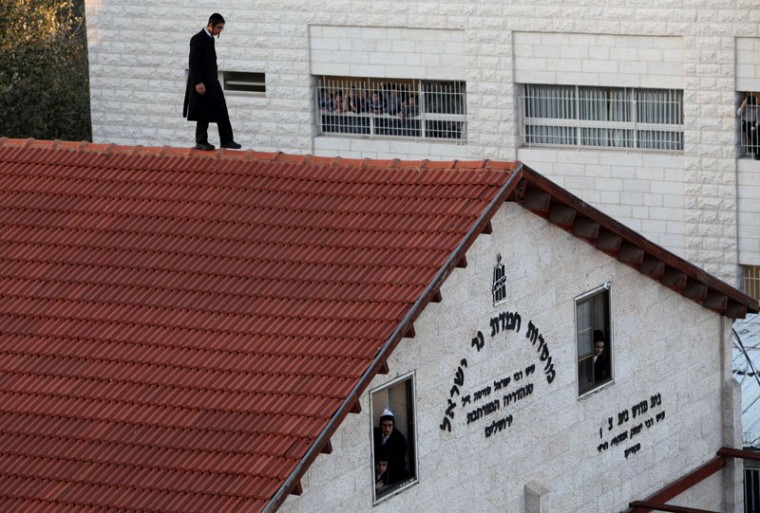 An Ultra-Orthodox man walks on the roof of a building to get a better view of the funeral of Rabbi Moshe Tabersky in Jerusalem, one of the victims of an attack by two Palestinians on Jewish worshippers killing four Israelis at a synagogue in the holy city on November 18, 2014. Two Palestinians armed with a gun and axes burst into a Jerusalem synagogue and killed four Israelis before being shot dead, in the deadliest attack in the city in years. (Gil Cohen-Magen/AFP/Getty Images) 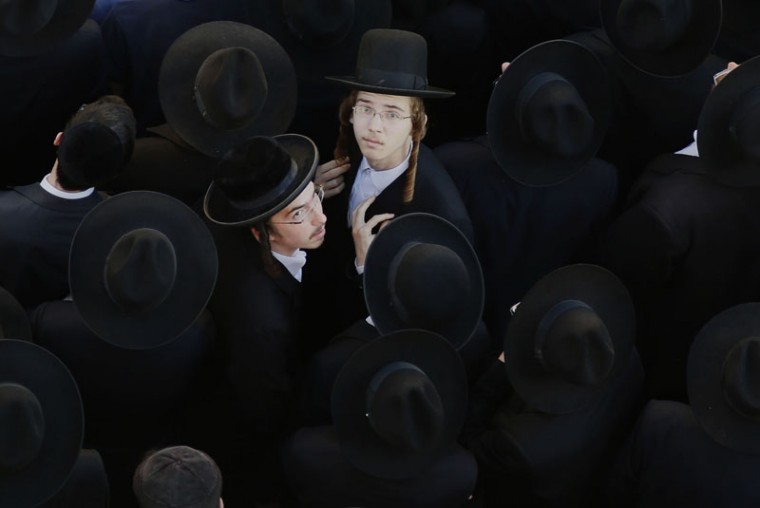 Ultra-Orthodox Jews mourn at the site of attack by two Palestinians on Jewish worshippers killing four Israelis at a synagogue in the Ultra-Orthodox Har Nof neighborhood in Jerusalem, at the site where the attack took place on November 18, 2014. Two Palestinians armed with a gun and axes burst into a Jerusalem synagogue and killed four Israelis before being shot dead, in the deadliest attack in the city in years. (Gali Tibbon/AFP/Getty Images) 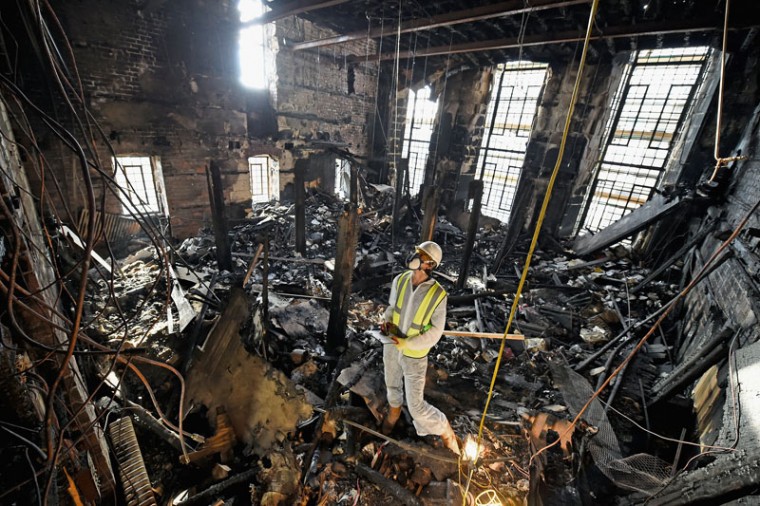 Forensic archaeologists Edward Rayner begins sifting through the ashes of the fire damaged Mackintosh Library at the Glasgow School of Art on November 18, 2014 in Glasgow, Scotland. The library, one of the world’s finest examples of art nouveau, was destroyed by fire in May. Experts are hoping to recover items that can be restored and help with the buildings restoration. (Jeff J Mitchell/Getty Images) 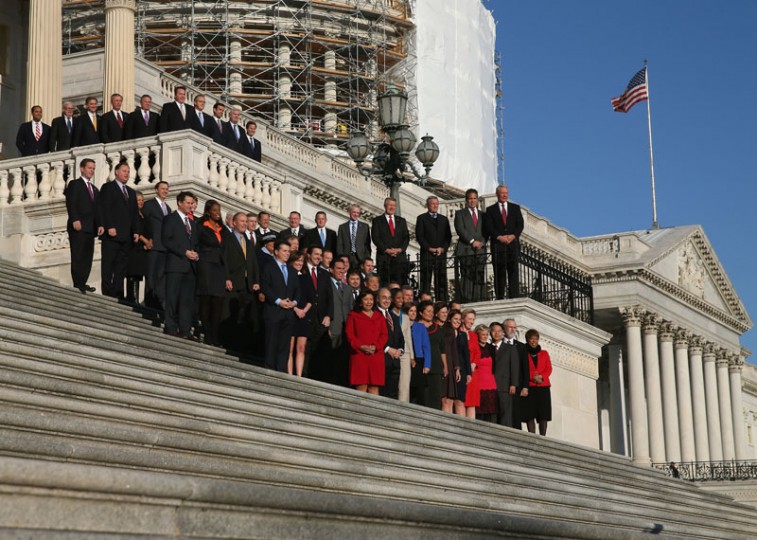 Newly elected freshman members of the upcoming 114th Congress pose for a class photo on the steps of the U.S. Capitol on November 18, 2014 in Washington, DC. . This week the new members have been undergoing orientation before taking office in January. For the first time in eight years Republicans hold the majority and control both houses of Congress. (Mark Wilson/Getty Images) 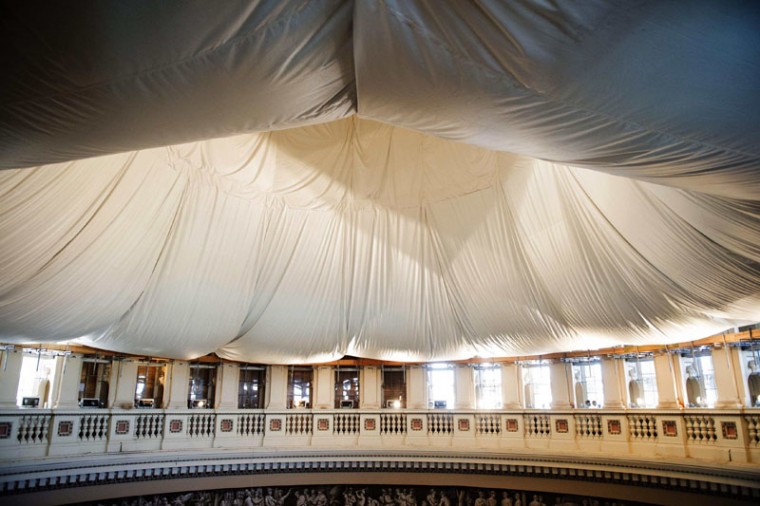 A doughnut shaped protective safety net hangs from the ceiling of the rotunda in the U.S. Capitol during a tour of the U.S. Capitol Dome Restoration Project in Washington, November 18, 2014. (Bill Clark/Pool/Reuters) 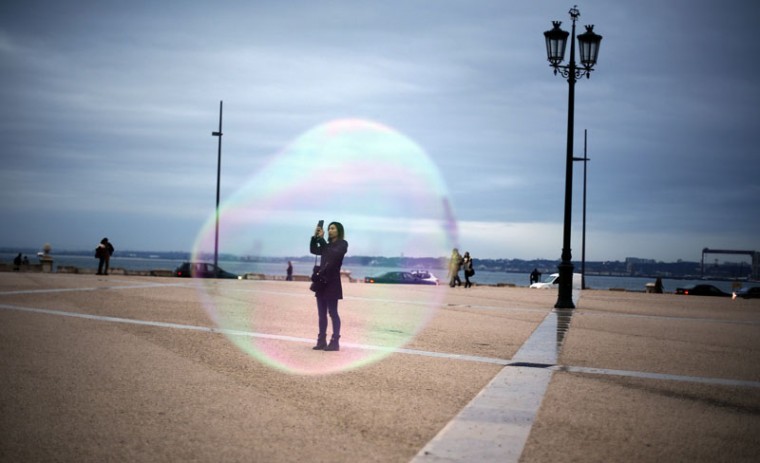 A tourist is seen through a soap bubble as she takes a picture at Comercio square in downtown Lisbon November 18, 2014. (Rafael Marchante/Reuters) 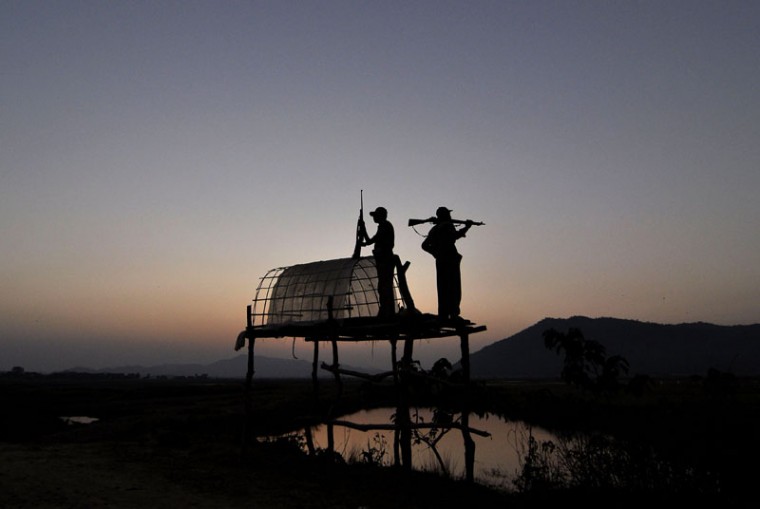 Indian forest guards lookout for rhinoceros from a raised platform at a makeshift camp on the periphery of Pobitora Wildlife Sanctuary in Morigaon district some 50kms from Guwahati on November 18, 2014. The sanctuary, with the highest density of one horned rhinoceros in the world, some 95 according to a 2012 rhino census in an area of just 38.8 sq. km., reopened for tourists from November 2 2014, and has already seen the action of poachers who killed one rhino on November 15, inside the sanctuary and took away the horn. (Biju Boro/AFP/Getty Images) 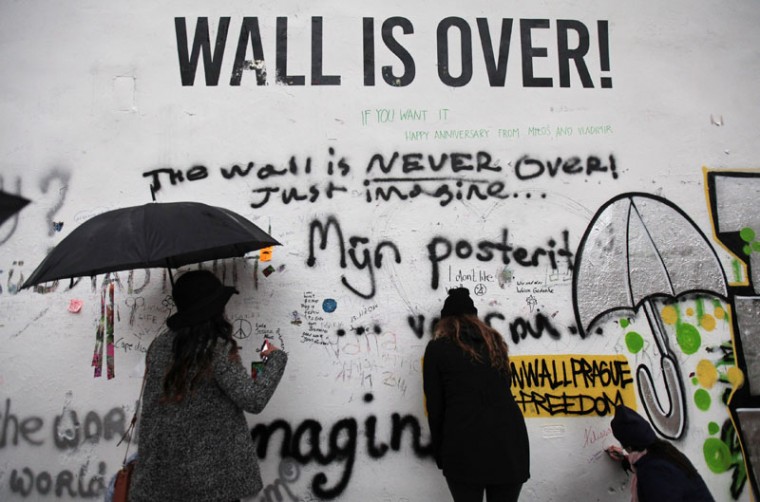 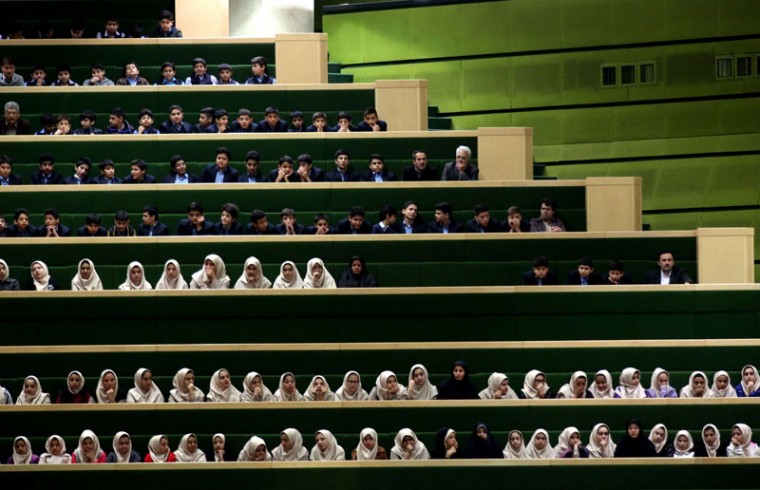 Iranian school girls attend a parliament session in Tehran on November 18, 2014, to listen to President Hassan Rouhani’s speech defending his nominee for the ministry of Science, Research and Technology, Fakhredin Ahmadi Danesh Ashtiyani. Iran’s parliament is expected to decide on the nomination of the new science minister following disagreements between the conservative-dominated body and reformist President Rouhani on the sensitive post. (Atta Kenare/AFP/Getty Images) 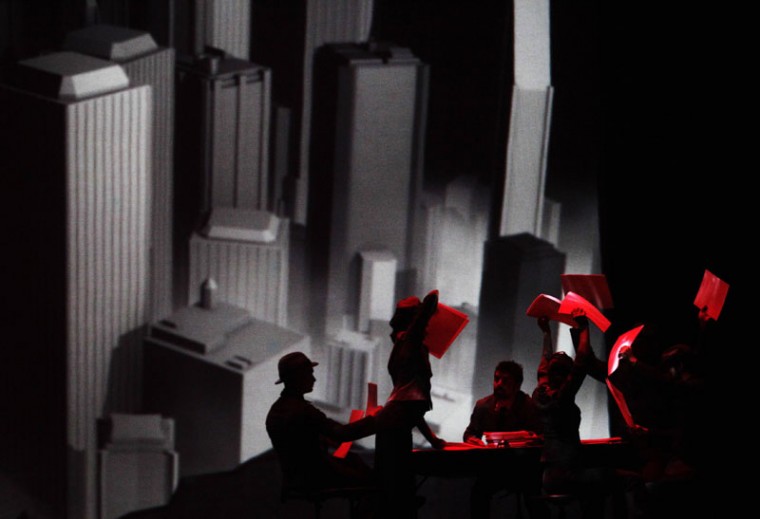 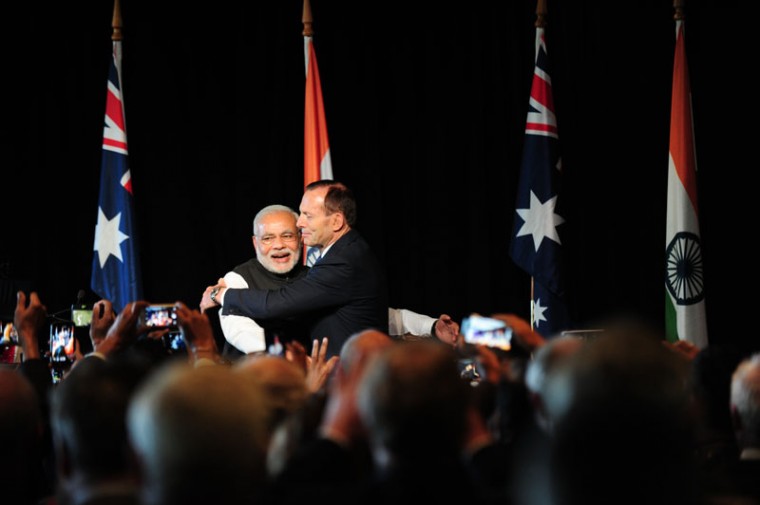 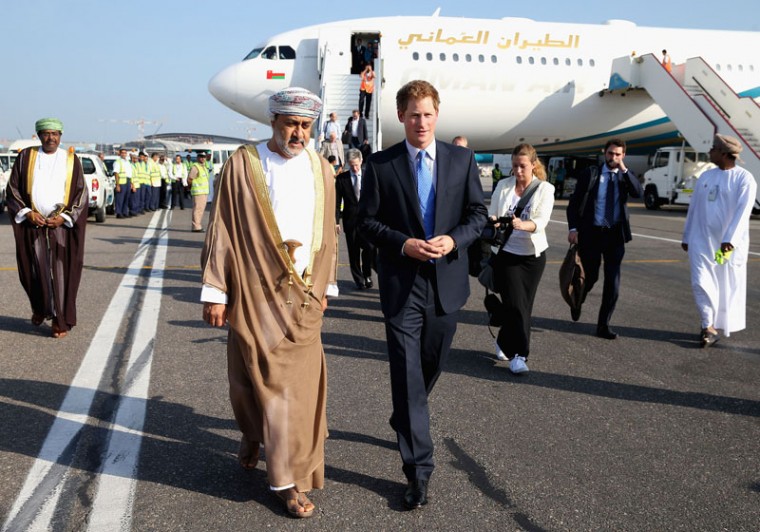 Prince Harry chats to the Sultan of Oman’s First Cousin His Highness Sayyid Haithem Bin Tariq Al Said as he arrives at the VIP section of Muscat International Airport on November 18, 2014 in Muscat, Oman. Prince Harry is on a three day visit to Oman before heading to Abu Dhabi to compete in a charity polo match for his charity Sentebale. (Chris Jackson/Getty Images) 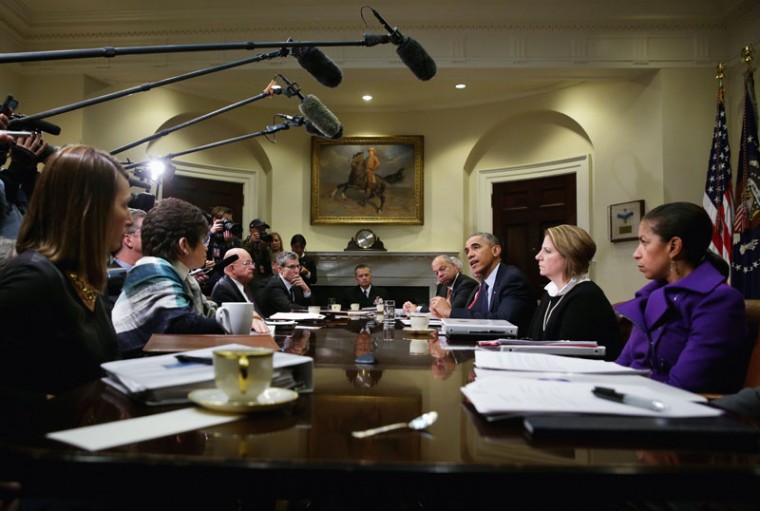 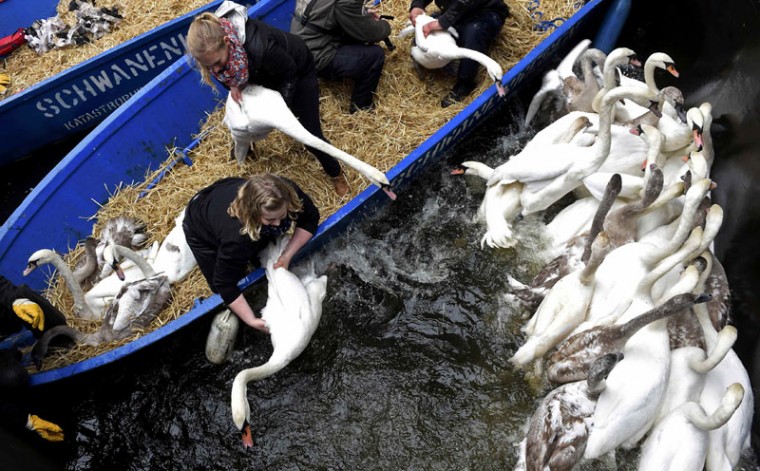 Swans are caught in a small lock after being rounded up from Hamburg’s inner city lake Alster November 18, 2014. Every year the swans are collected from waterways around the northern German city of Hamburg and taken to winter quarters where they are fed and cared for until the spring. (Fabian Bimmer/Reuters) 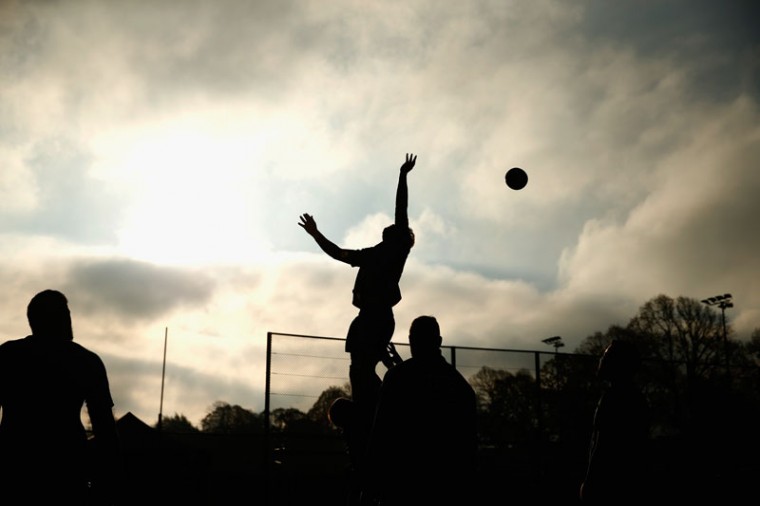 The All Blacks practice the line out during the New Zealand All Blacks training session at Sophia Gardens on November 18, 2014 in Cardiff, Wales. (Phil Walter/Getty Images) 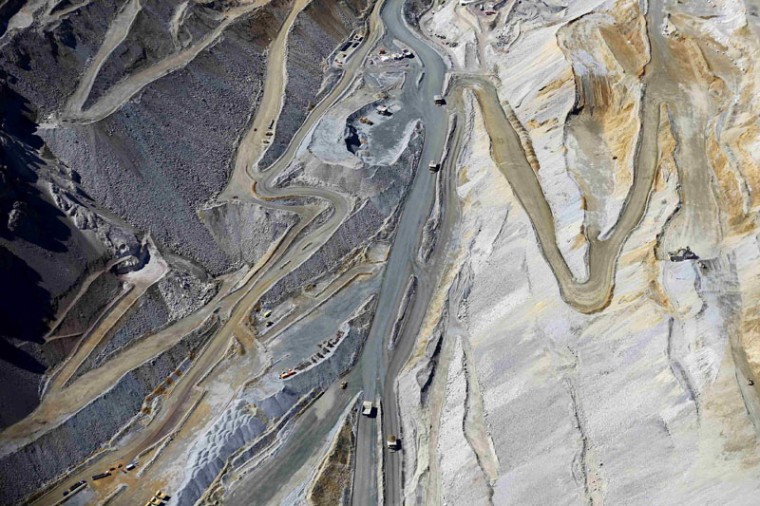 An aerial view of roads as mining trucks travel along at CODELCO’S Andina copper mine at Los Andes Mountain range, near Santiago city, November 17, 2014. The rock glaciers of the Chilean central zone, a huge source of water for the basins of the capital, are said to be threatened by the environmental impacts of hydroelectric and mining projects, according to environmental activists Greenpeace. (Ivan Alvarado/Reuters) 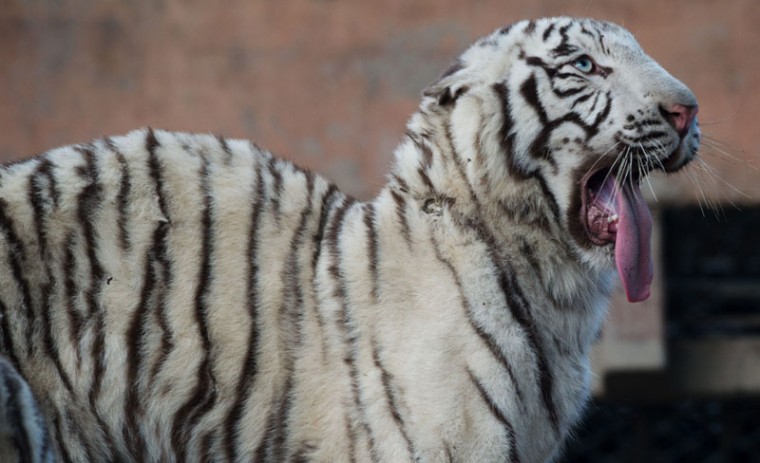 A Bengal Tiger yawns in its enclosure in the Shanghai Zoo on November 18, 2014. (Johannes Eisele/AFP/Getty Images) 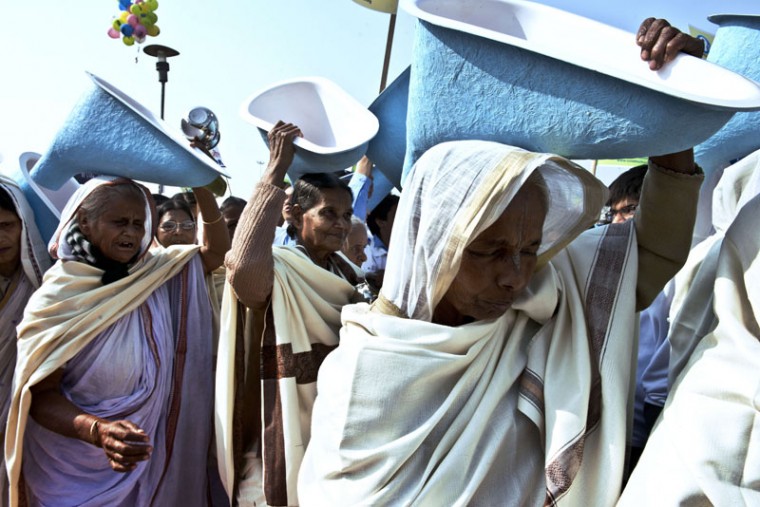 Indian women carry toilets on their heads as they participate in the opening ceremony of the three-day International Toilet Festival in New Delhi on November 18, 2014, the eve of World Toilet Day. UNICEF estimates that almost 594 million — or nearly 50 percent of India’s population — defecate in the open, with the situation acute in dirt-poor rural areas. Some 300 million women and girls are forced to squat outside normally under the cover of darkness, exposed not only to the risks of disease and bacterial infection, but also harassment and assault by men. (Roberto Schmidt/AFP/Getty Images) 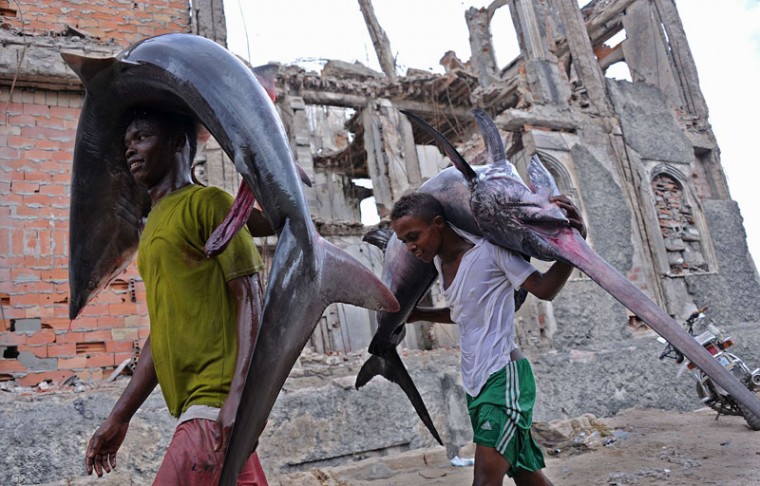 Porters carry the carcasses of a shark (L) and a Marlin (R) to the local market in Hamarweyne near the port of Mogadishu on the Indian Ocean coast on November 18, 2014 in the Somalia capital as fishermen bring in their catch. (Mohamed Abdiwahab/AFP/Getty Images) 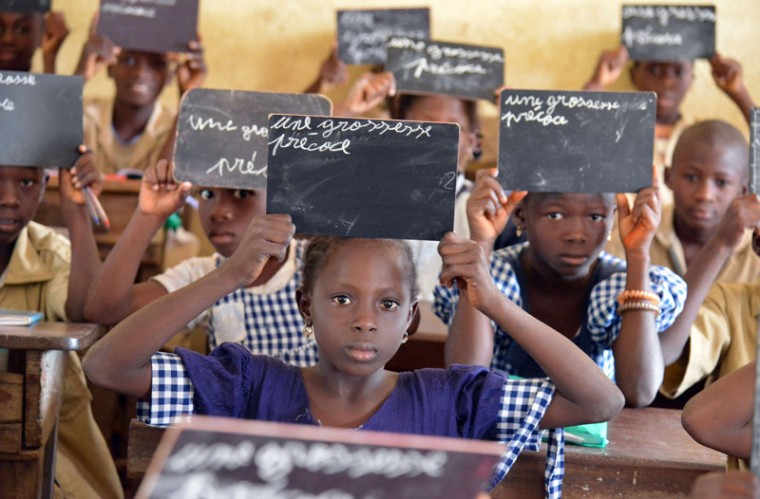 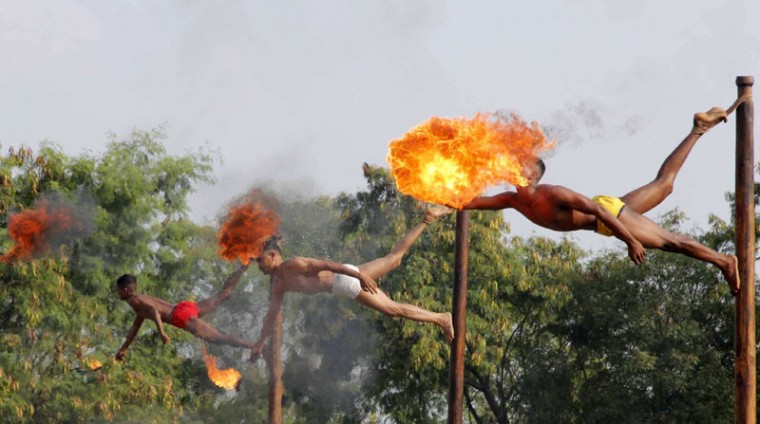 Indian soldiers take part in a demonstration of ‘fire breathing’ at the start of Operation Hand in Hand – a joint training exercise between Indian and Chinese troops – at Aundh Military Camp in Pune on November 18, 2014. The ten day exercise with the Asian neighbors in the western Indian state of Maharashtra is set to focus on sharing strategic knowhow in counter-insurgency and counter-terrorism operations. (Strstrdel/AFP/Getty Images) 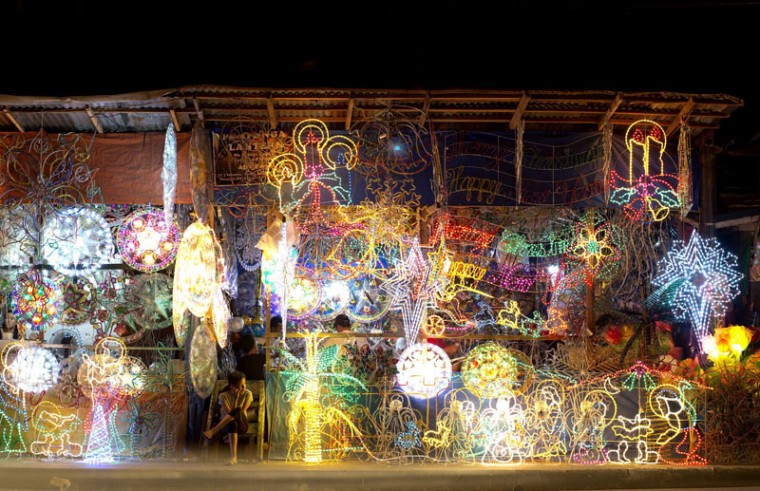 Vendors wait for customers amongst Christmas lanterns known locally as ‘parol’ on display along a street in Manila on November 18, 2014. Parol are star-shaped Christmas lanterns patterned to resemble the Star of Bethlehem, and are made from bamboo covered with paper. They are displayed in houses, offices, buildings, and streets, and according to Filipino tradition and beliefs, also represent the victory of light over darkness. (Noel Celis/AFP/Getty Images) 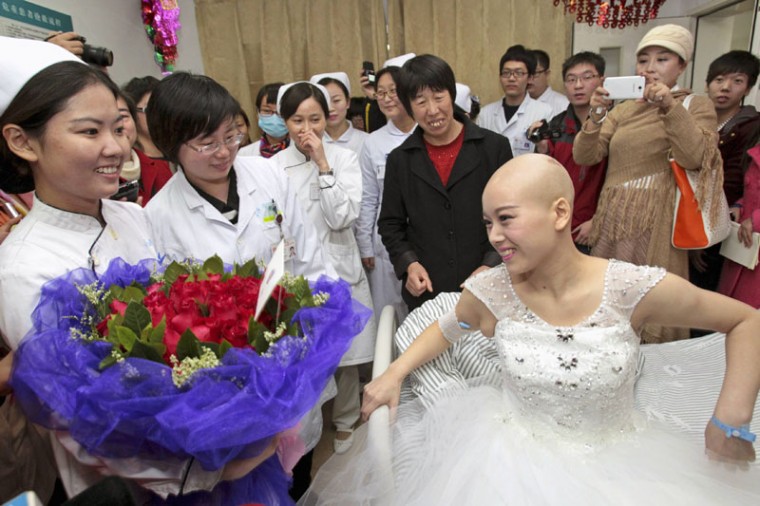 Bride Fan Huixiang (front R), a 25-year-old cancer patient, receives flowers from nurses on her bed before her wedding ceremony at a hospital in Zhengzhou, Henan province November 17, 2014. Fan was diagnosed with late stage adenocarcinoma, a type of cancerous tumor, at her thoracic vertebra this June. She and her 24-year-old husband Yu Haining held their wedding ceremony at the hospital on Monday after five years of relationship, local media reported. (China Daily/Reuters) 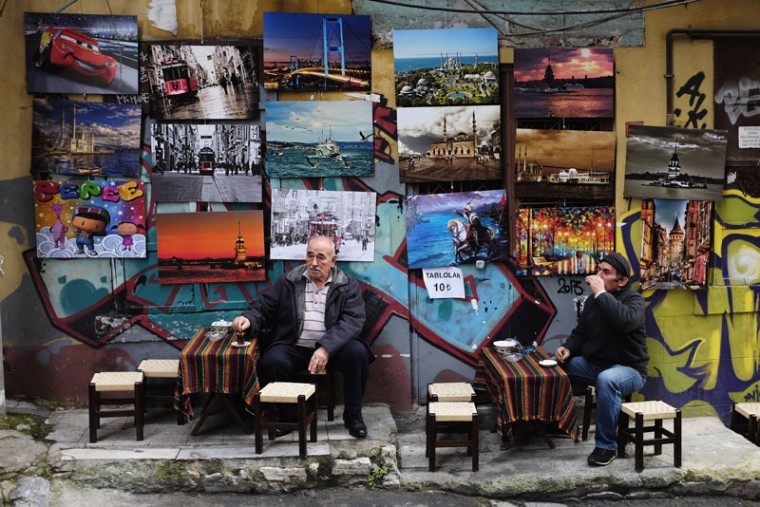 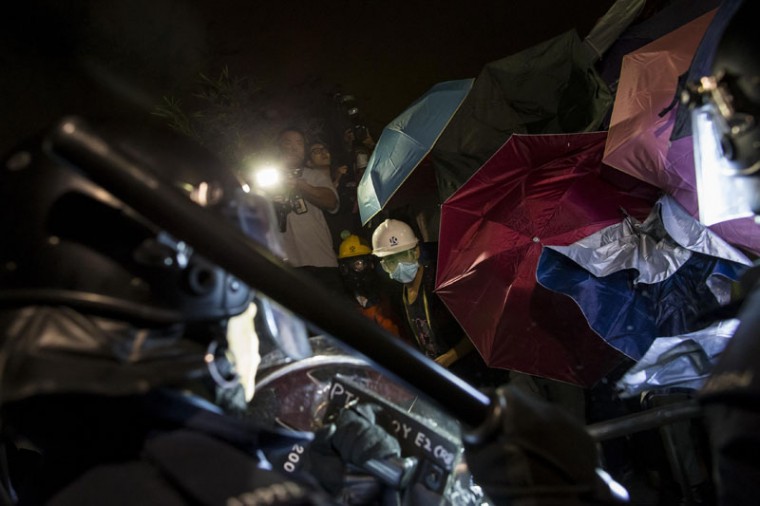 Protesters clash with riot police after they try to break into the Legislative Council in Hong Kong early November 19, 2014. A small group of Hong Kong pro-democracy protesters broke into the city’s legislature via a side door early on Wednesday, and police stopped others storming the building as tensions jumped following a period of calm. (Tyrone Siu/Reuters) 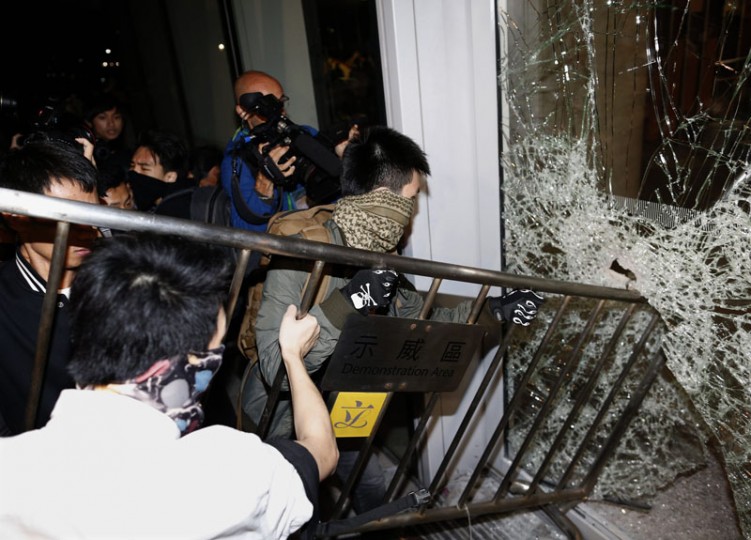 Masked pro-democracy protesters try to break with a fence a glass window of the Legislative Council in Hong Kong early November 19, 2014, in response to an earlier clear up of part of the “Occupy Central” protest site. Hong Kong on Tuesday cleared part of a protest camp in the heart of the city that has been occupied by pro-democracy demonstrators for nearly two months, leaving most of the main protest site intact. (Tyrone Siu/Reuters) 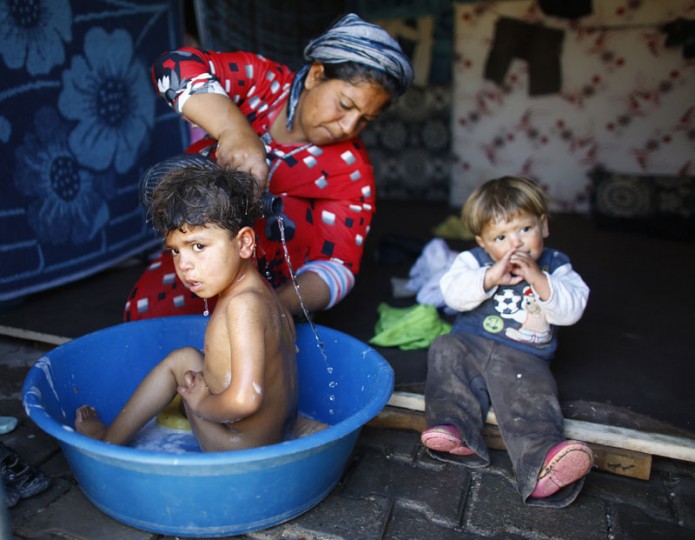 A Kurdish refugee woman from the Syrian town of Kobani washes her daughter at a refugee camp in the border town of Suruc, Sanliurfa province November 18, 2014. (Osman Orsal/Reuters) 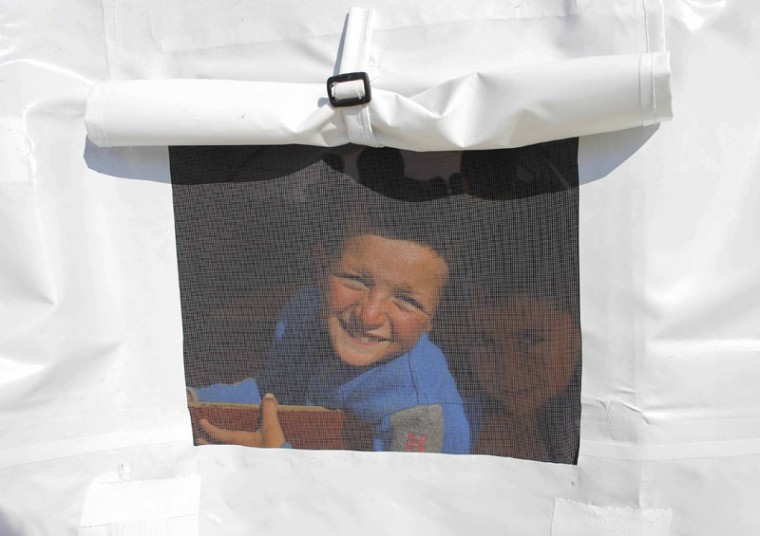 A Kurdish refugee boy from Kobani looks out from the window of a tent at a refugee camp in the border town of Suruc, Sanliurfa province November 18, 2014. (Osman Orsal/Reuters)